Posted by Imperial Harvest on 16 September 2021

Imperial Feng Shui is an exclusive art of Feng Shui which was reserved for the Chinese Royal Family during the ancient Chinese dynasties.

For centuries, this closely-guarded branch of Feng Shui was highly favoured among the rich and powerful aristocrats for its practicality and proven effectiveness.

Unlike Classical Feng Shui which focuses on the prediction and forecast of one’s destiny, Imperial Feng Shui focuses on helping individuals to design their own destiny.

This is achieved through empowering them to be in a state of consistent good luck.

By meticulously applying the finest and most carefully crafted Imperial Feng Shui treasures such as Jadeite, Agarwood and Sandalwood, one is able to realise their unlimited potential. 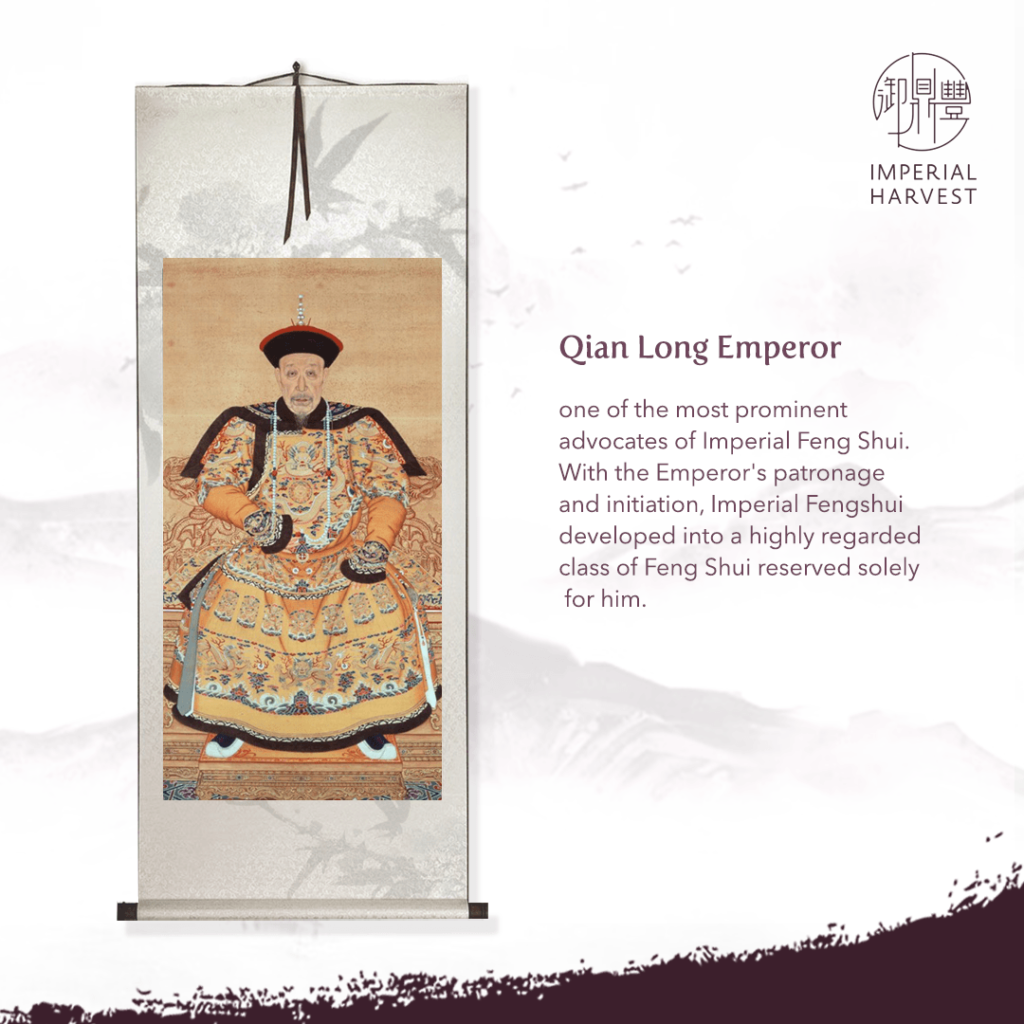 The Qian Long Emperor of the Qing Dynasty is one of the most prominent advocates for Imperial Feng Shui.

With the Emperor’s patronage and initiation, Imperial Feng Shui developed into a highly regarded class of premium Feng Shui reserved solely for royalty.

To explain the complex concept of Imperial Feng Shui, we will begin with its most fundamental concept––the Origins of Ba Gua. 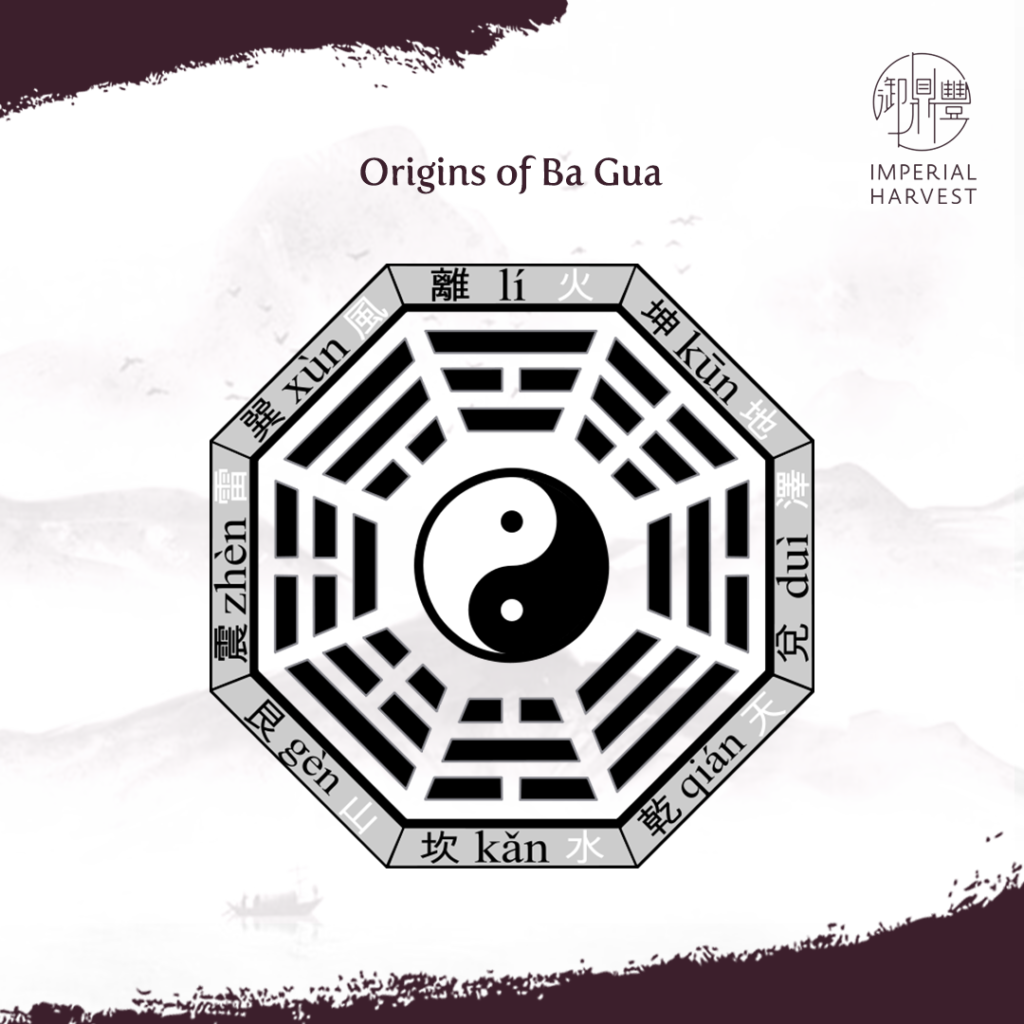 Before the universe morphed into and took its present form, all was vague and amorphous.

Although life existed, it was unable to sustain itself.

In the study of I-Ching (易经), this phenomenon is theorised as the Great Ultimate / the Great Beginning / Wu Ji 无极.

Tai Ji, Yin and Yang and the Four Phenomenon are the building blocks of Ba Gua.

Over time, the universe gradually began to produce material forces.

Forces which were clear and light drifted upwards to form the Heavens.

Those that were heavy and turgid contrastingly solidified to become the Earth. 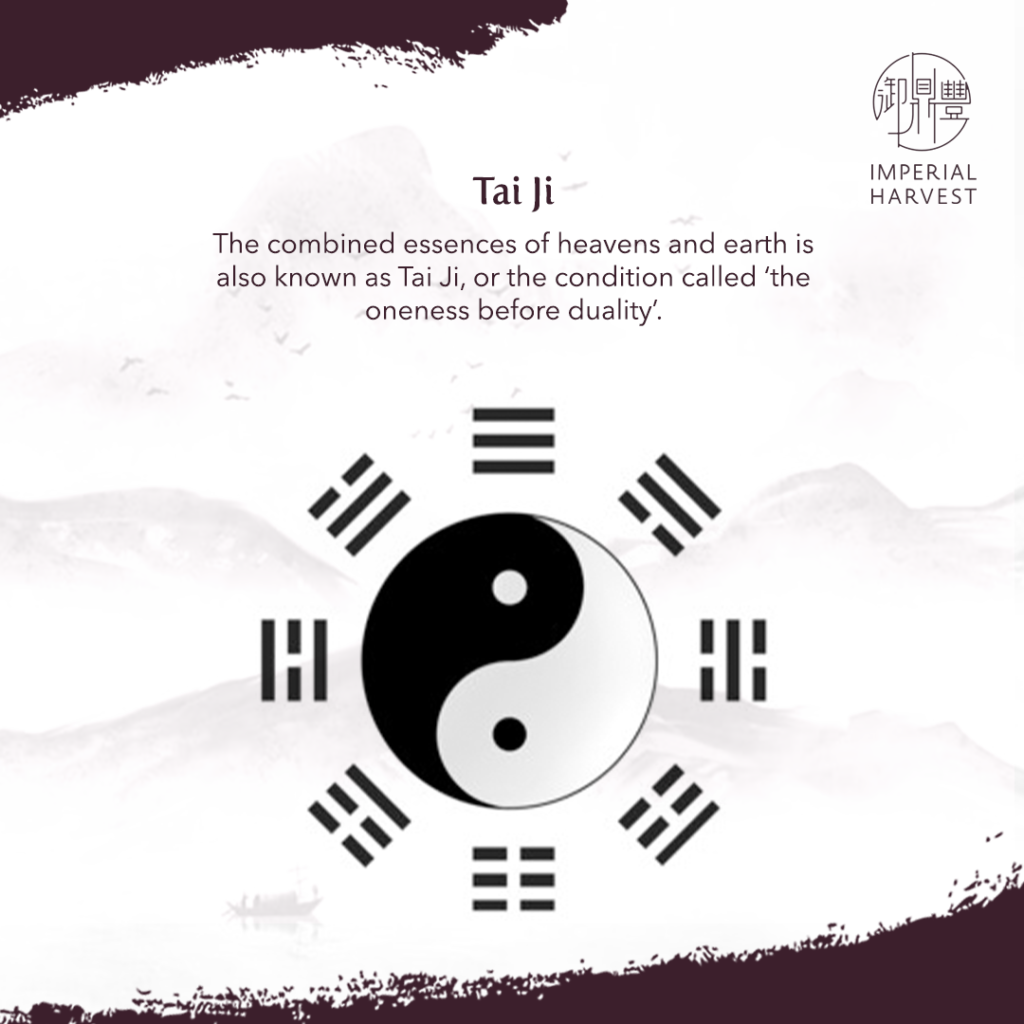 The combined essence of Heaven and Earth is known today as Tai Ji.

All things and events are the result of Yin and Yang.

Yin and Yang are thought of as complementary forces borne out of a conceptually whole reality stipulated within the realm of Tai Ji.

In Tai Ji, the symbols of Yin and Yang are joined in harmony to form a S-shaped jigsaw of black and white.

When the substance of Yin is separated from its accompanying Yang substance, the primal energies of life stimulating evolution are created. 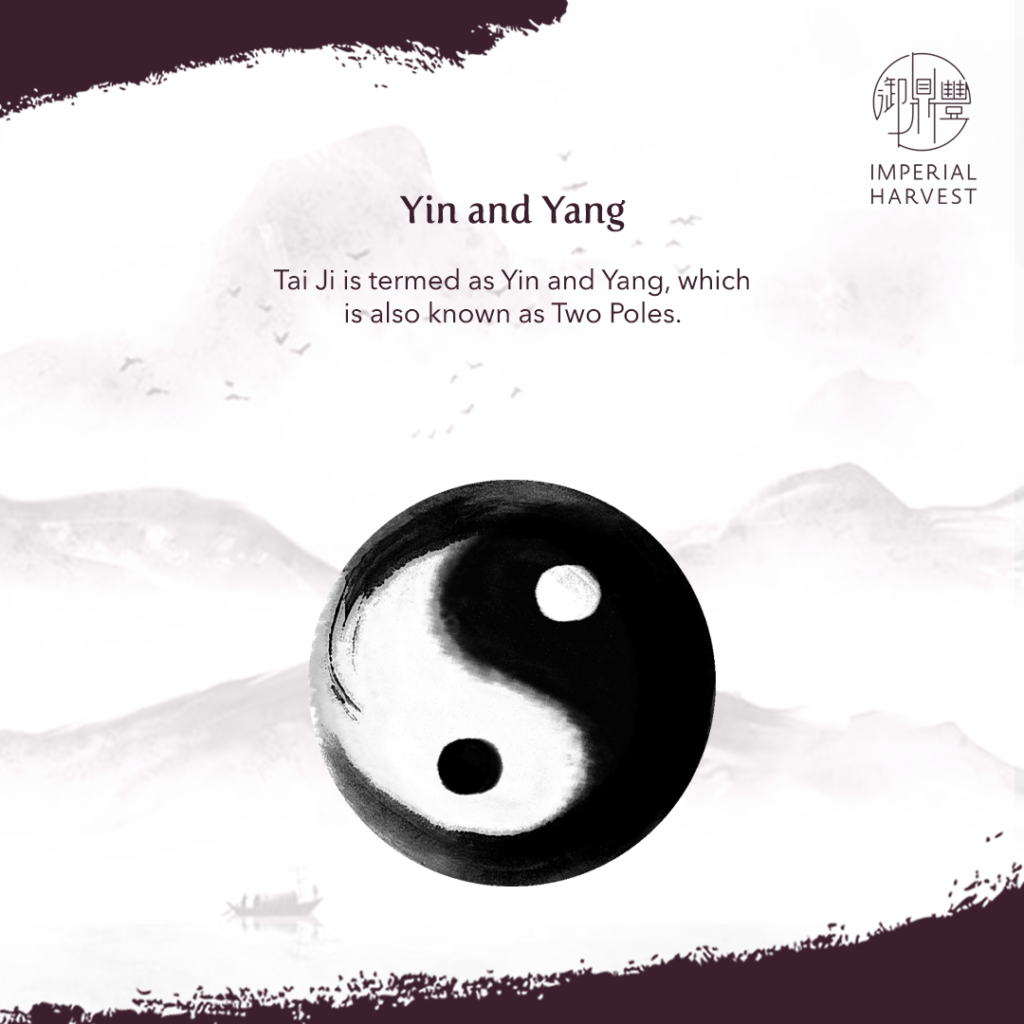 In the diagram of Yin and Yang, the segments are further divided into what is known as the Four Phenomenon.

The Four Phenomenon are then further divided into the Ba Gua, which serves as the basis of Imperial Feng Shui. 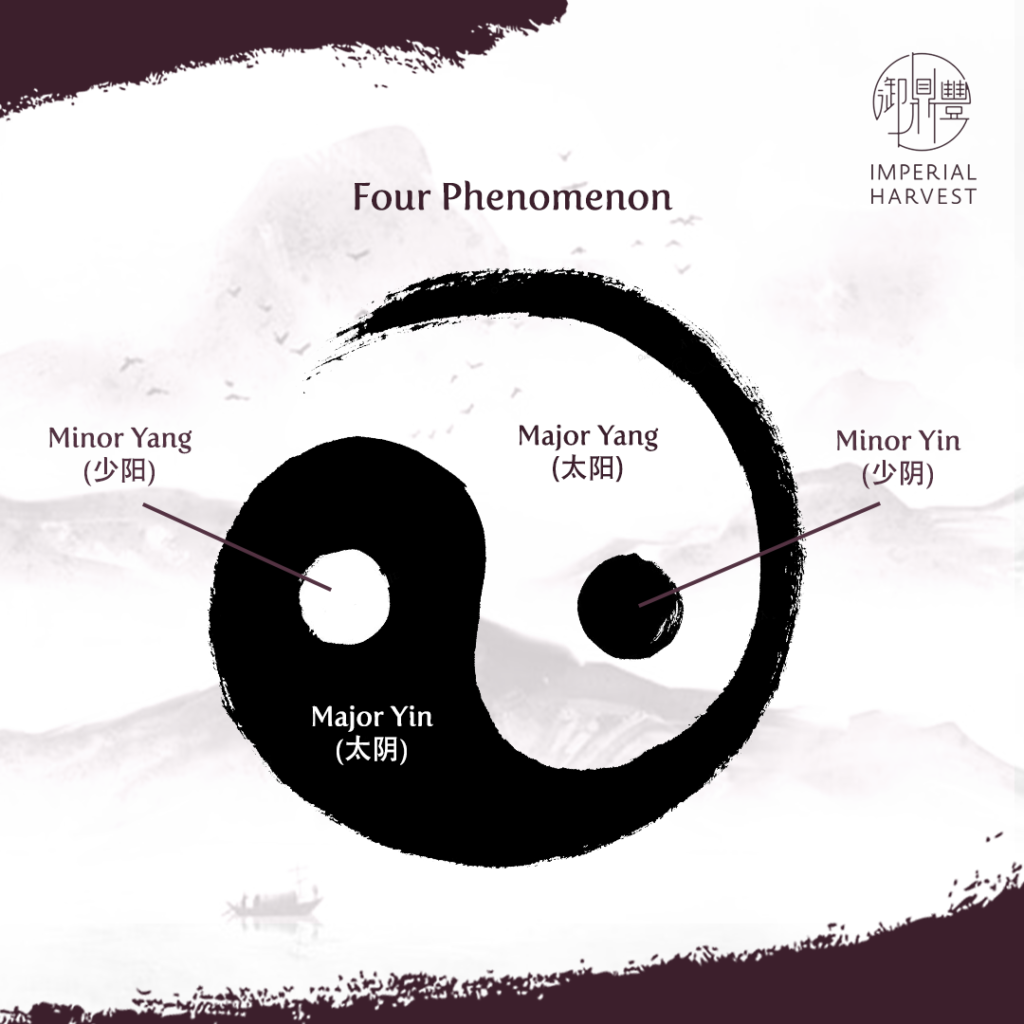 During the Qing dynasty, Imperial Feng Shui masters went through years of meticulous research and development to unlock and leverage the powerful dominant forces of Yin and Yang to manifest wealth, health and success for the Imperial family.

Each type of Yin and Yang serves a specific purpose. With careful research and profound wisdom, Imperial Feng Shui masters discovered that the Four Phenomenon served as the basis of improving one’s luck and wealth capacity.

They discovered the Heavenly Secret that Jadeite, Agarwood and Sandalwood were key Treasures with which the Chinese royal family could successfully unlock and achieve a consistent state of good luck with expanded wealth capacity.

Luck refers to the events, people and opportunities we encountered at the different phases of our lives.

Direct wealth capacity defines the income potential of our career and business.

Indirect wealth capacity defines the income potential of our investments and trading.

By expanding one’s wealth capacity, one can accumulate a larger amount of wealth

An Imperial Feng Shui master would analyse the Bazi chart to determine the Favourable Elements and auspicious colours before prescribing the suitable Imperial Feng Shui Treasure to achieve your personal success. The design of the pendant is prescribed based on the goals and aspirations of blessed Imperial Harvest clients. 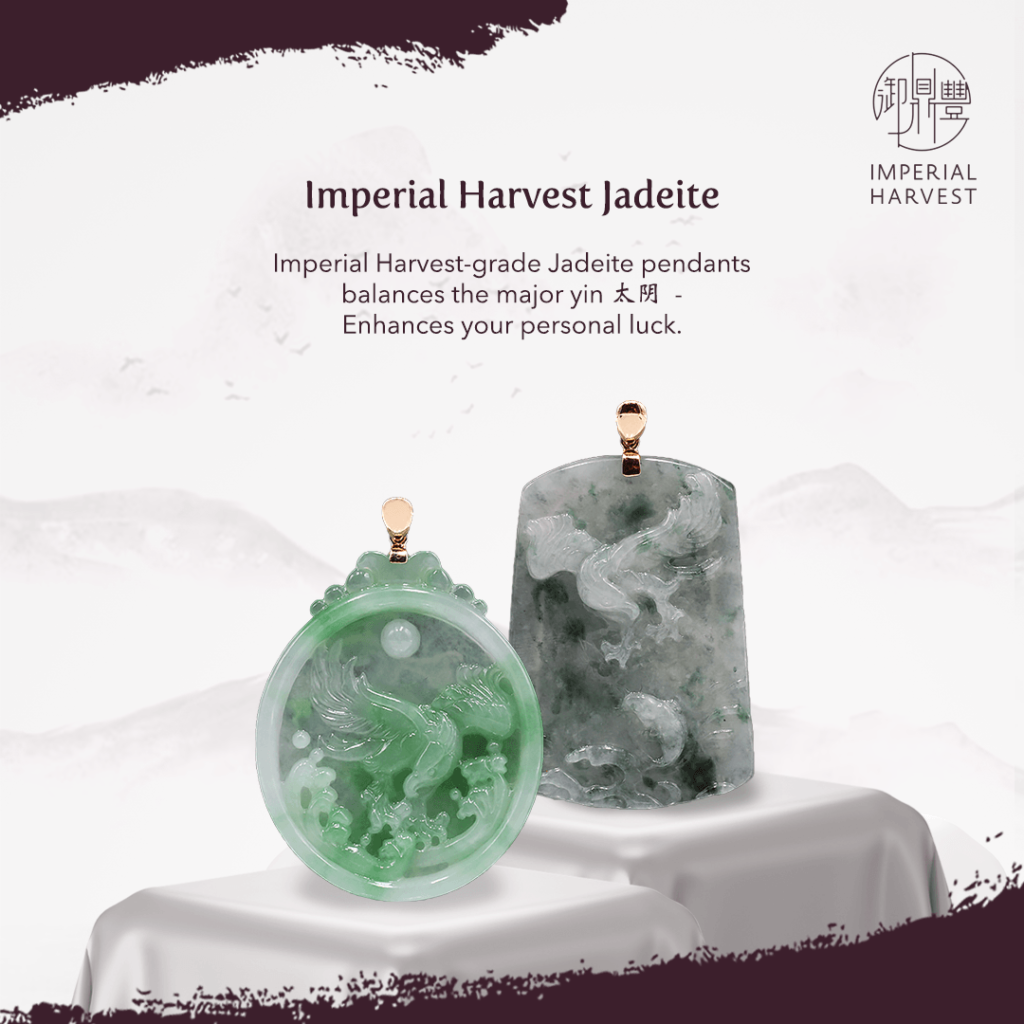 Complementary to the pendants, our Imperial Harvest-grade Jadeite cabochons balance the minor yang (少阳) which improves your intuition.

Intuition is critical for making decisions in important situations, when there is ambiguity and a lack of data. Having good intuition empowers you to seize the first mover advantage.

Likened to the position of Minor Yang which resides within the Major Yin, Imperial Harvest Cabochons are harvested from the centre of large jadeite boulders where the energy is the densest and most intense.

Only the cabochon of the highest clarity and fancy vivid colours qualified to be Imperial Harvest-grade Jadeite Cabochon. 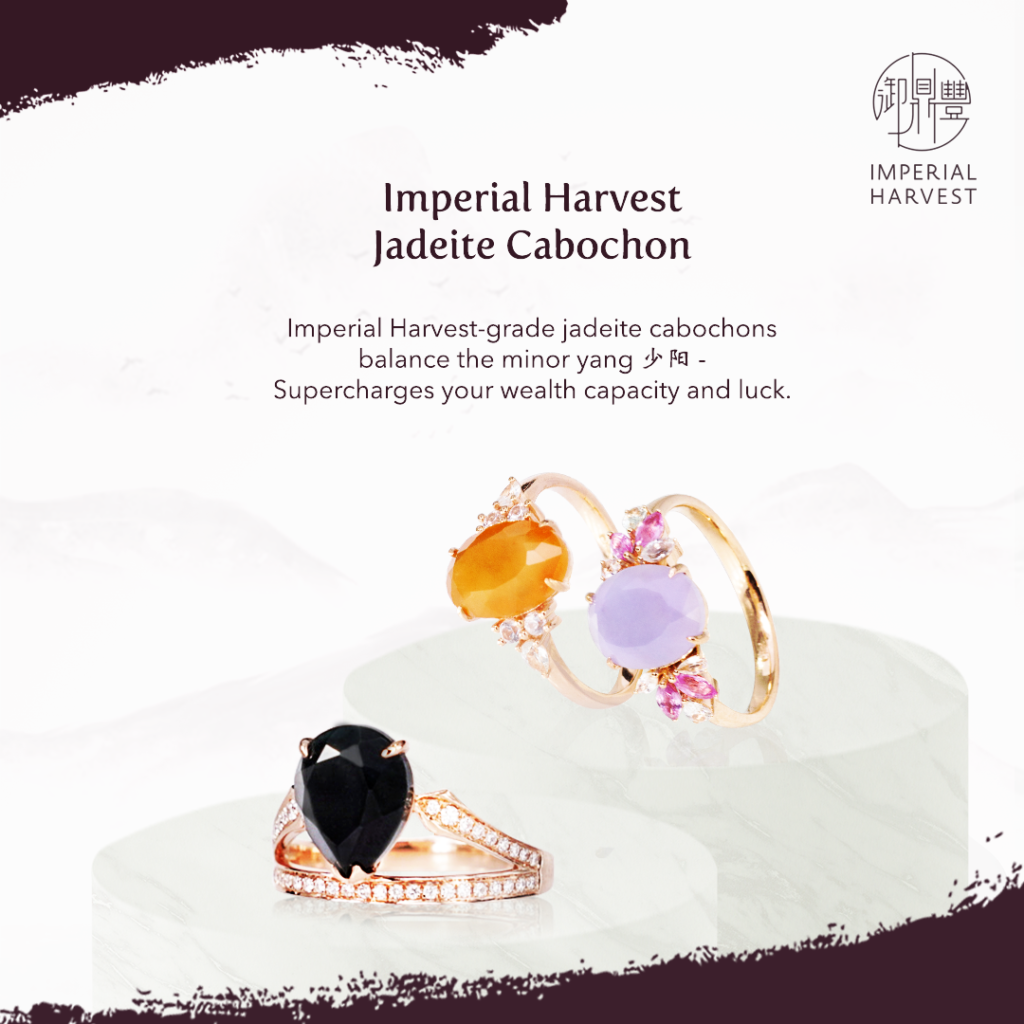 The superlative beauty of Imperial Harvest Agarwood is the result of strict quality standards and our commitment to harvest only the most exquisite Agarwood at every step.

Our craftsmen see the beauty in every Imperial Harvest Agarwood, and work with passion and precision to unleash the rich resin of each Agarwood from within. 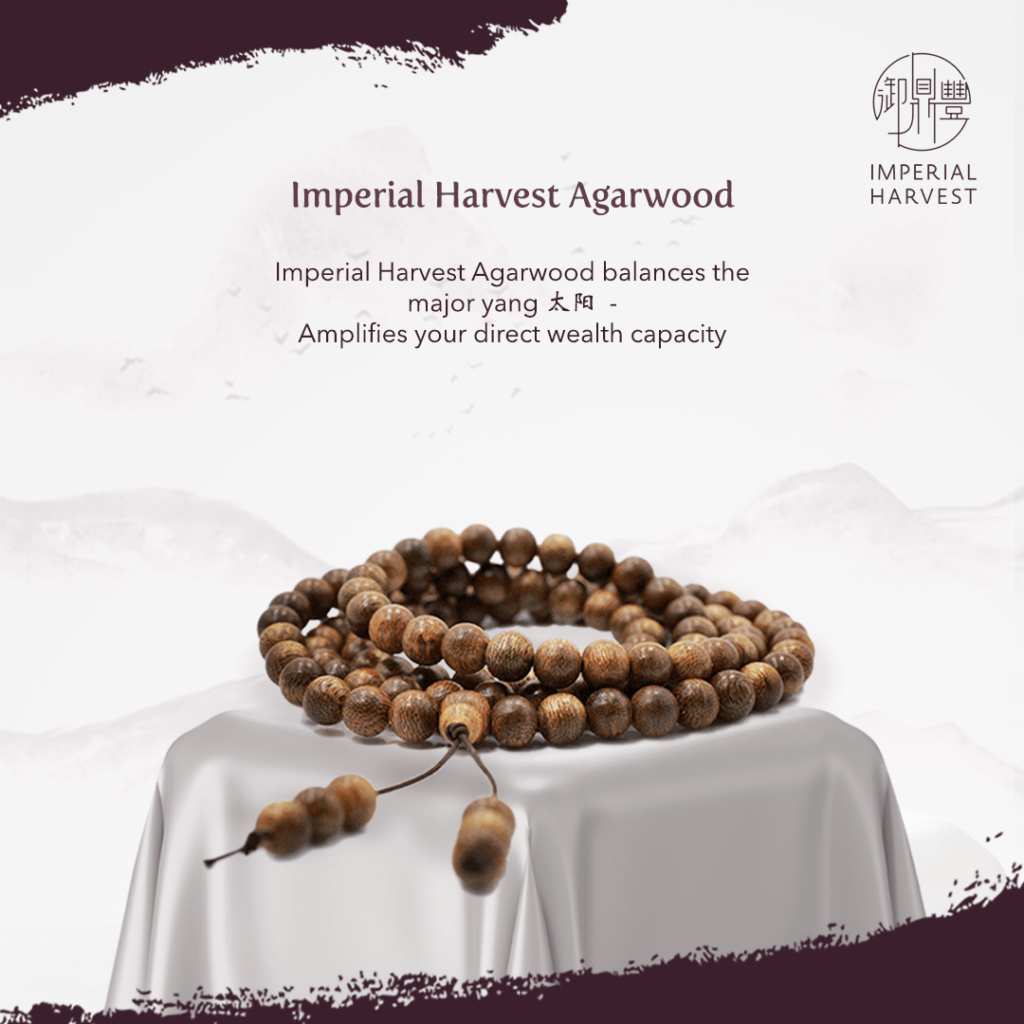 Only India Old Mountain Sandalwood of at least 80 years of age qualifies to be Imperial Harvest Sandalwood.

Every sandalwood is stored at the indirect wealth sector of our workshop studio so that it can absorb the prosperous indirect wealth energy during the natural fermentation process. 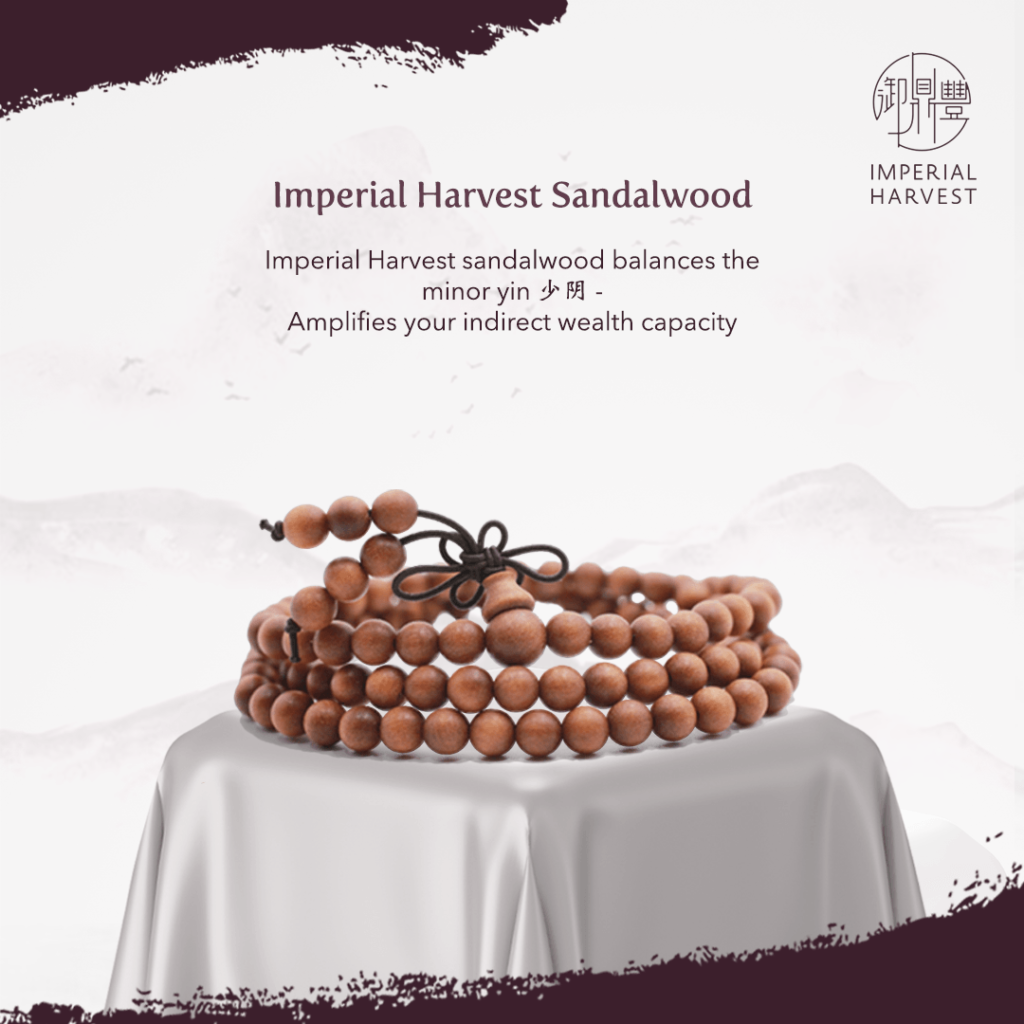 Exceptional level of attention is dedicated to every detail in the making of an Imperial Harvest Treasure.

An Imperial Harvest treasure is not just a trusted partner for your prosperity needs – it’s also a witness to life’s sweetest milestones, achievements and accomplishments.