Posted by Imperial Harvest on 10 December 2021

Throughout China’s dynastic history, the winter solstice stood as one of the most culturally and spiritually impactful events, deeply influencing long-standing traditions. Embodying a time of reflection, rebirth, renewal and hope for the future, it was one of the defining events in the imperial court calendar.

Each Imperial Harvest jadeite ring is adorned with a fine jadeite cabochon. These cabochons are imbued with the rich heritage of cultural and spiritual traditions that shaped and defined one of the world’s oldest civilisations. 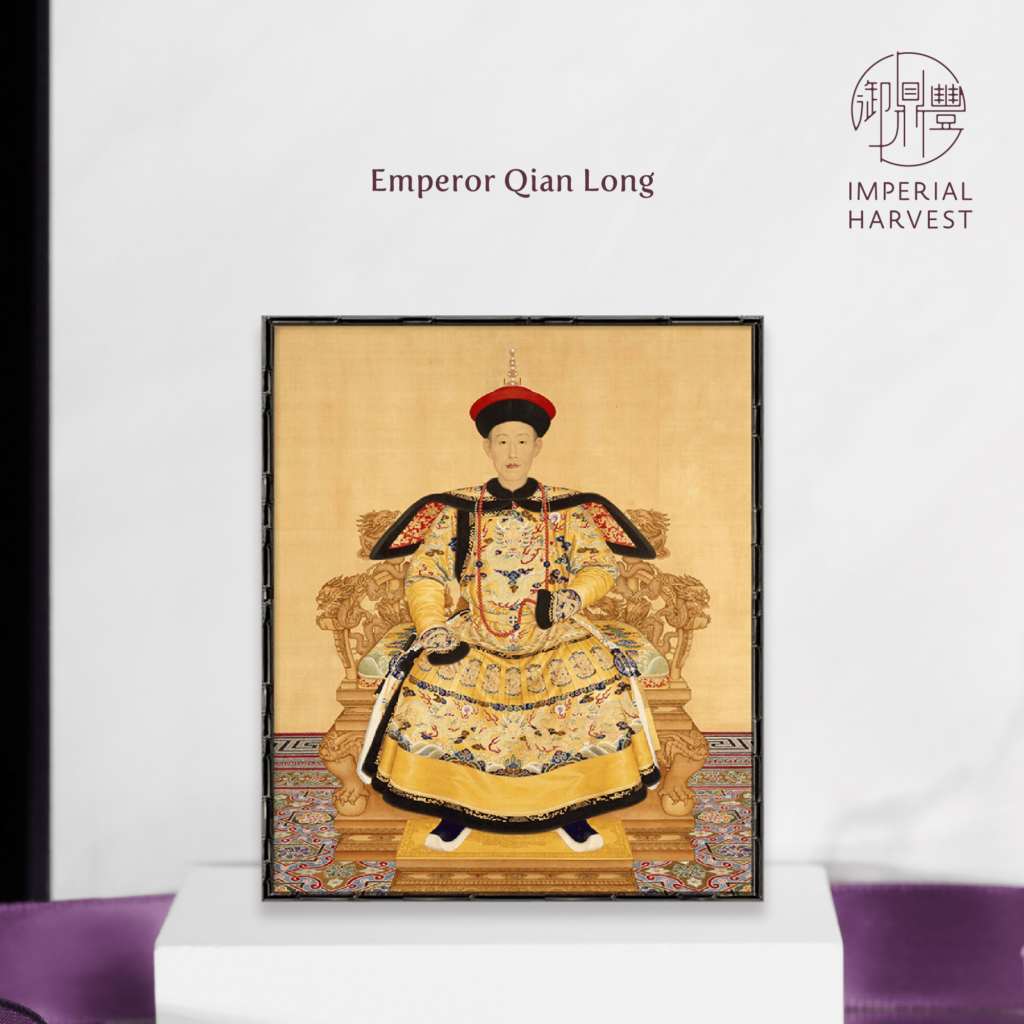 Emperor Qian Long, who reigned during the golden age of the Qing dynasty between 1736 and 1796, highly favoured the rich hues of Burmese jadeite, going to extraordinary lengths to obtain it. In a show of solidarity, Burma (now Myanmar) presented Emperor Qian Long with rare and exquisite raw jadeite as part of a yearly tribute to his eminent reign.

The 18th century saw an unprecedented explosion of interest in Burmese jadeite. Emperor Qian Long signed a treaty with the kingdom of Burma in 1770, resulting in the exportation of quality jadeite to China.

In 1784, Emperor Qian Long extended China’s jurisdiction into northern Burma, where Chinese explorers soon discovered an important source of the precious gem. From the late 18th century, jadeite began to be imported into China through a well-established trade route, making its way into the workshops of China’s foremost jadeite artisans. 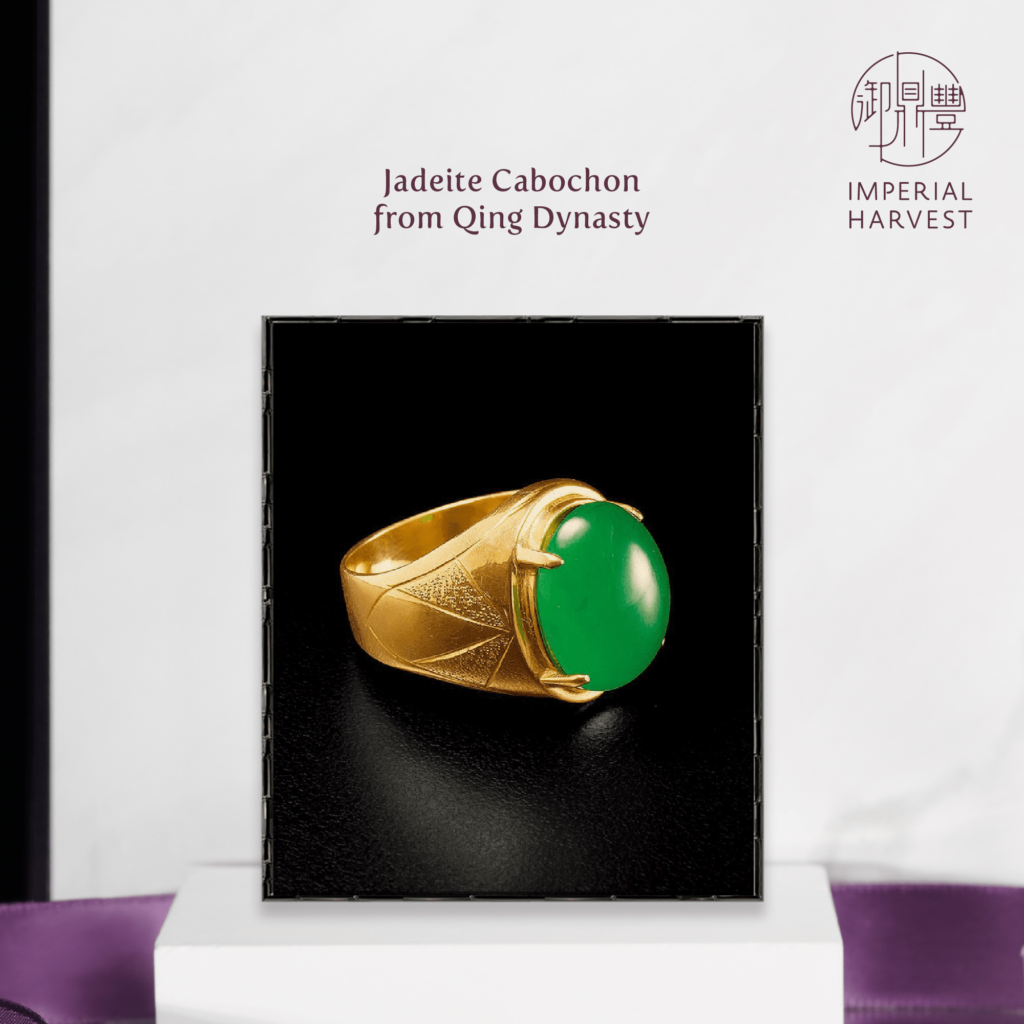 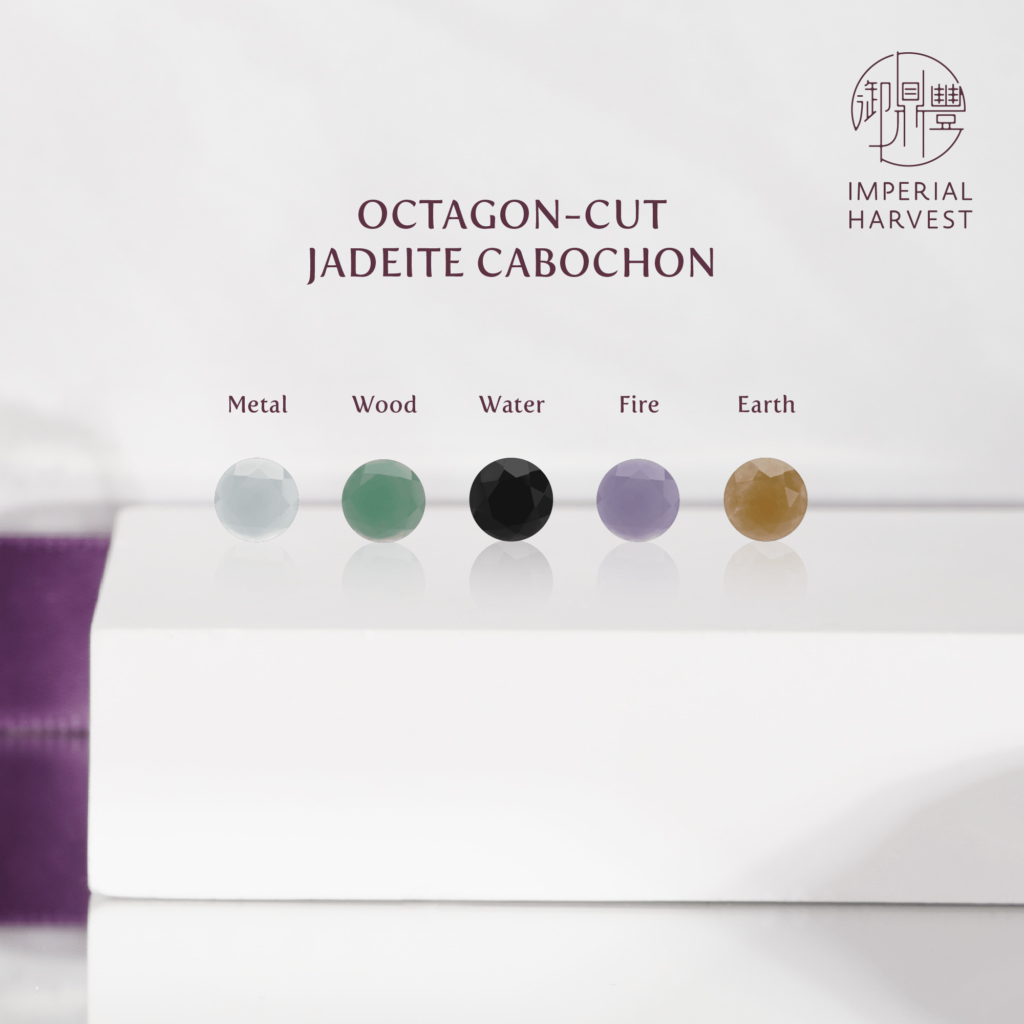 Imperial Harvest’s patented octagon-cut jadeite cabochon boasts eight chamfered edges, paying tribute to the Eight Trigrams in the art of Imperial Feng Shui. The Eight Trigrams are considered to be the foundational building blocks of Chinese civilisation and society, with their concepts applied extensively to developments in architecture, medicine, philosophy, the arts. 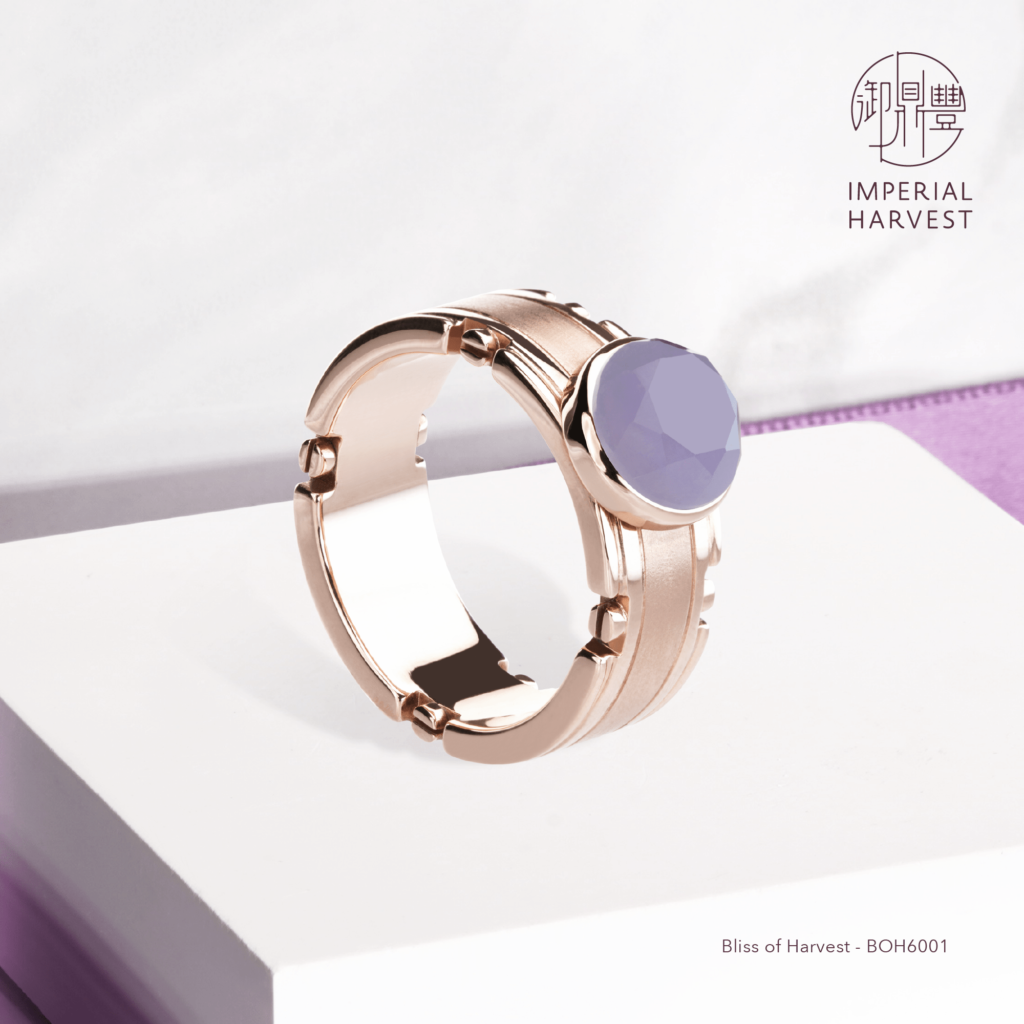 This stunning design conceptualised by Master David utilises a step-cutting technique, with the jadeite carved to resemble the steps leading to the Temple of Heaven – showcasing the radiance of the jadeite cabochon from every angle. The octagon-cut jadeite is designed to empower its destined wearer to be the architect of their own future and to forge their desired destinies. 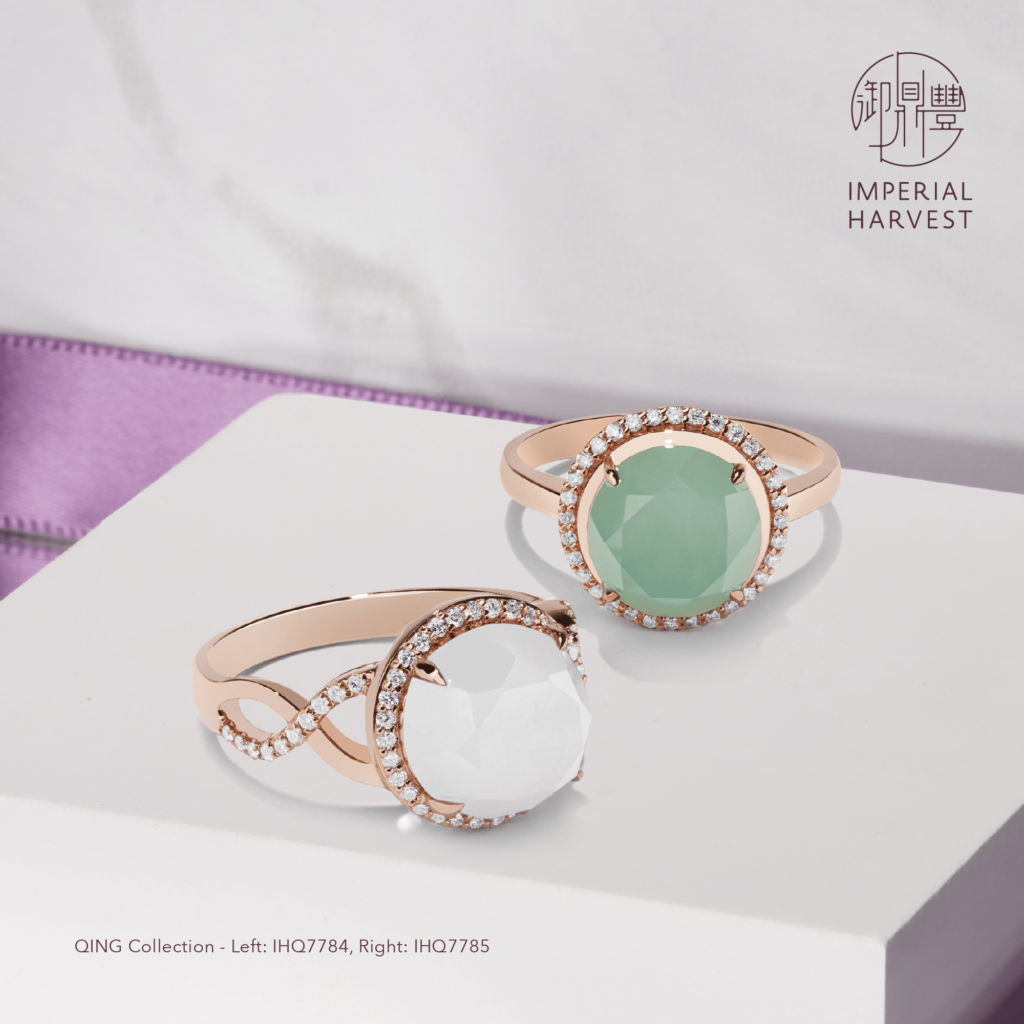 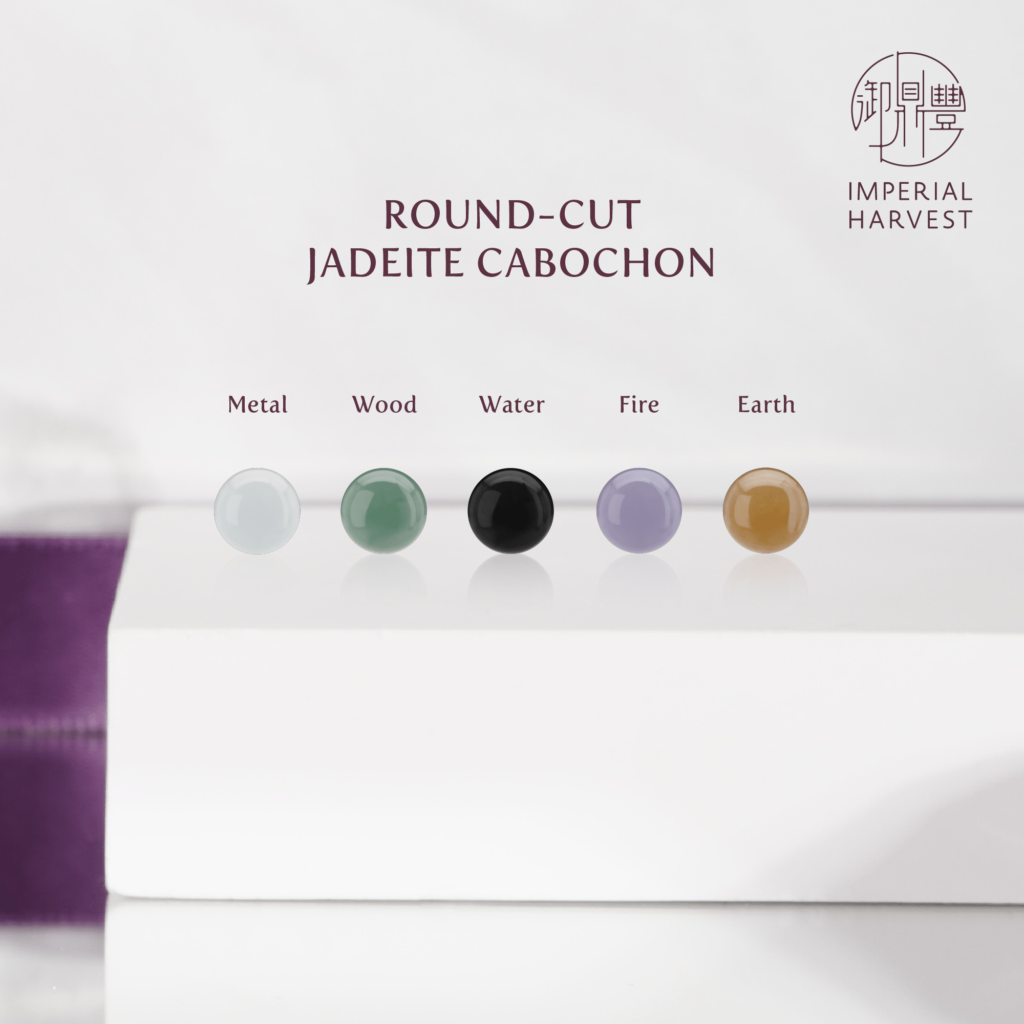 Elegantly shaped and perfectly symmetrical, Imperial Harvest’s round-cut jadeite cabochon is inspired by the Chinese notion of a ‘Round Heaven and Square Earth’ (天圆地方). This traditional philosophy has influenced the architectural design of the many iconic buildings in China, such as the renowned Temple of Heaven and the remarkable Imperial Palace. 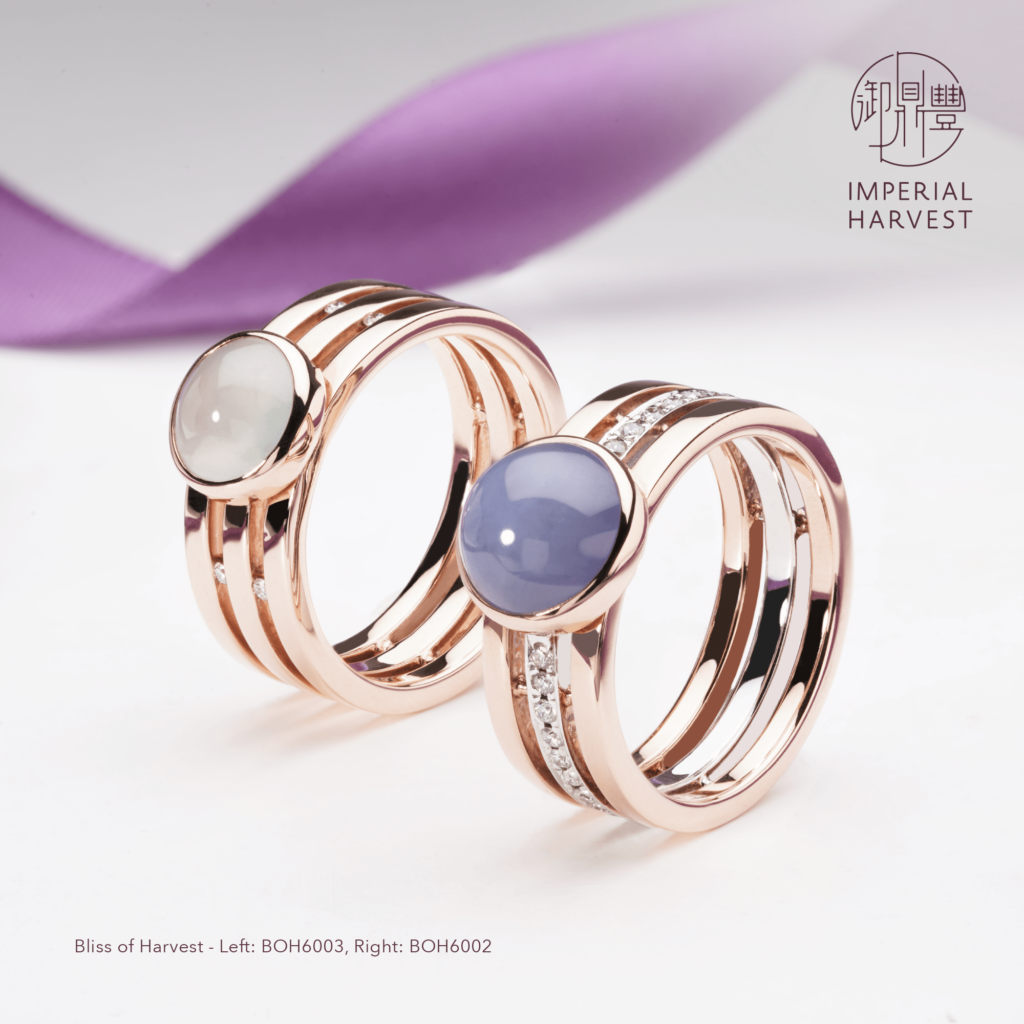 Imperial Harvest’s round-cut jadeite cabochon displays the highest level of superlative beauty and brilliance. The elegance of the round-cut cabochon highlights its natural translucency, as well as its interaction with light. Keeping in mind the success of Imperial Harvest’s blessed clients, Master David conceptualised the round-cut jadeite cabochon to empower its destined wearers with all-rounded triumphs in their careers, businesses, investment ventures, relationships and health. 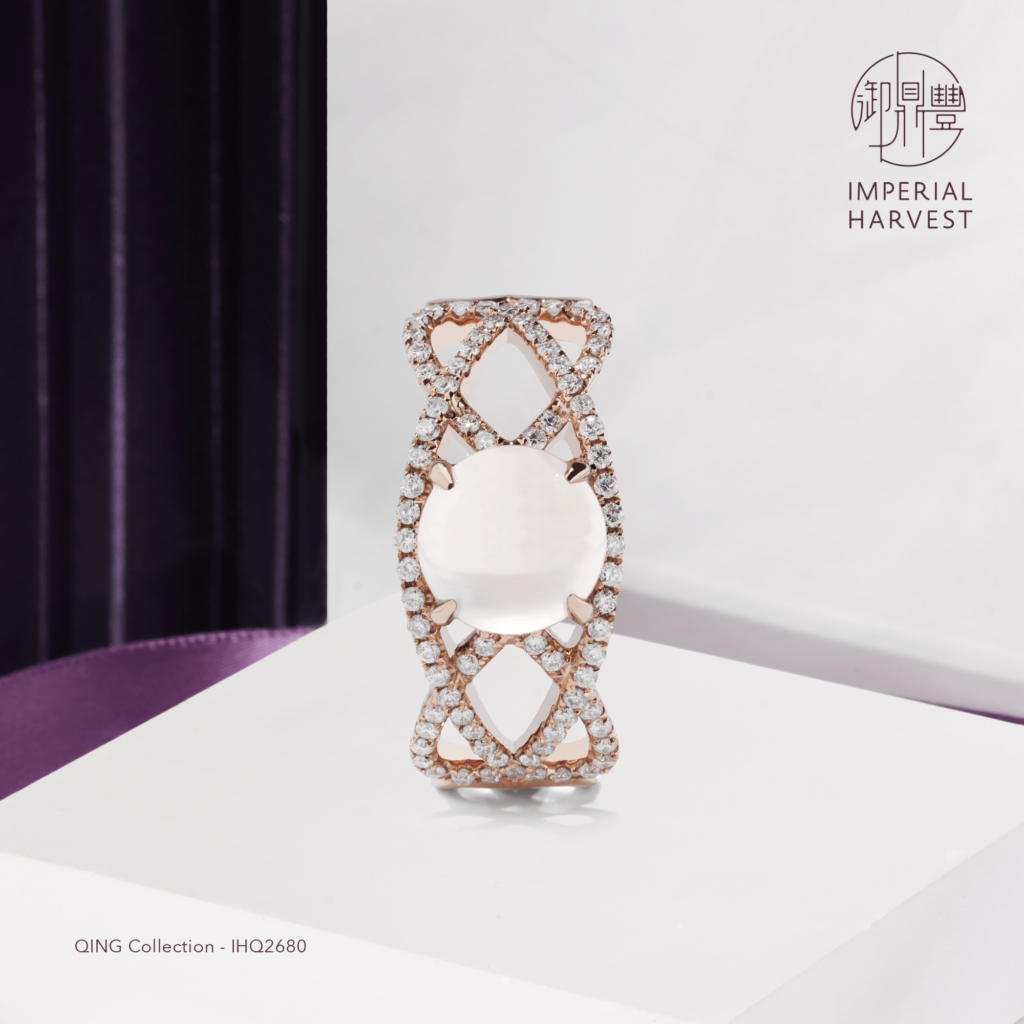 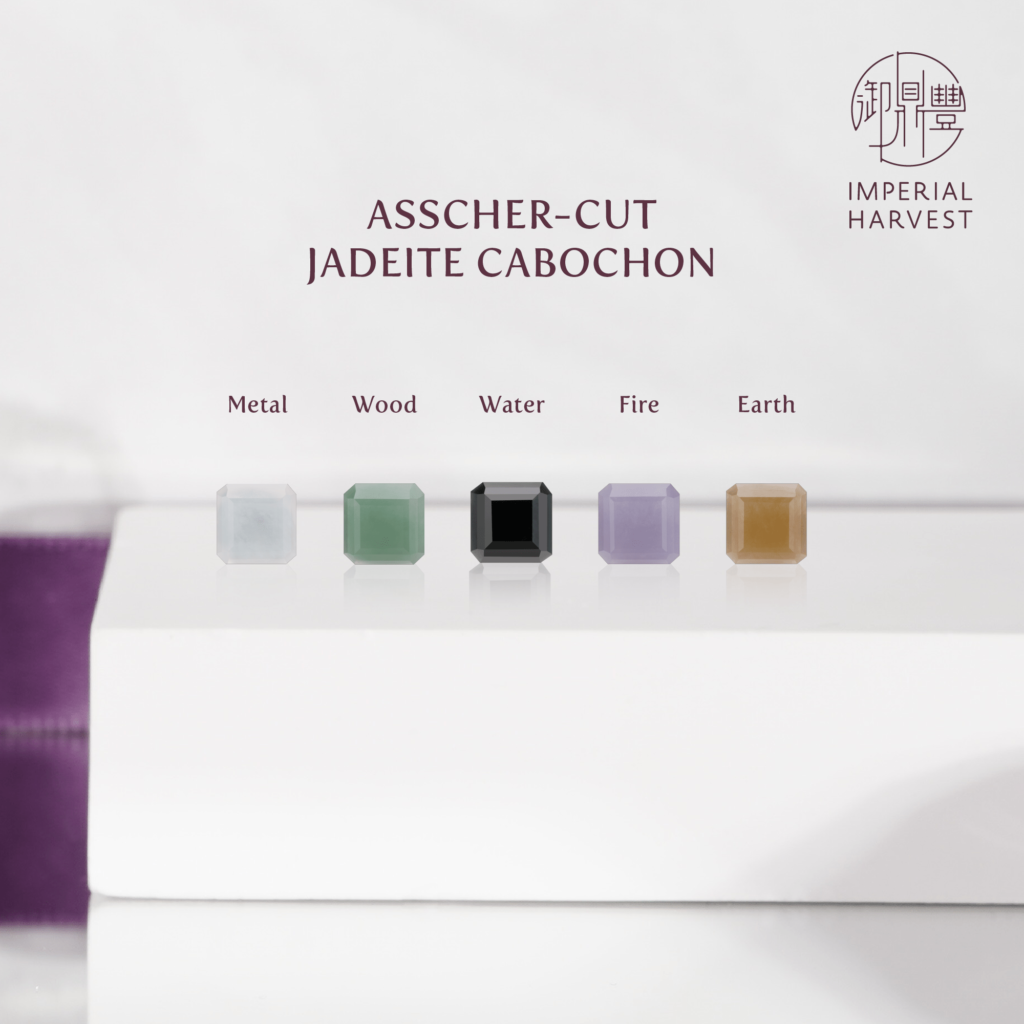 Imperial Harvest’s exquisite asscher-cut jadeite cabochon is symbolic of the Earth in the Chinese philosophical tradition of ‘Round Heaven and Square Earth’ (天圆地方). The philosophical concept of a square earth can be found in the “siheyuan” ​​(四合院) architectural composition used in the construction of royal palaces, religious sites and civilian residences across China. 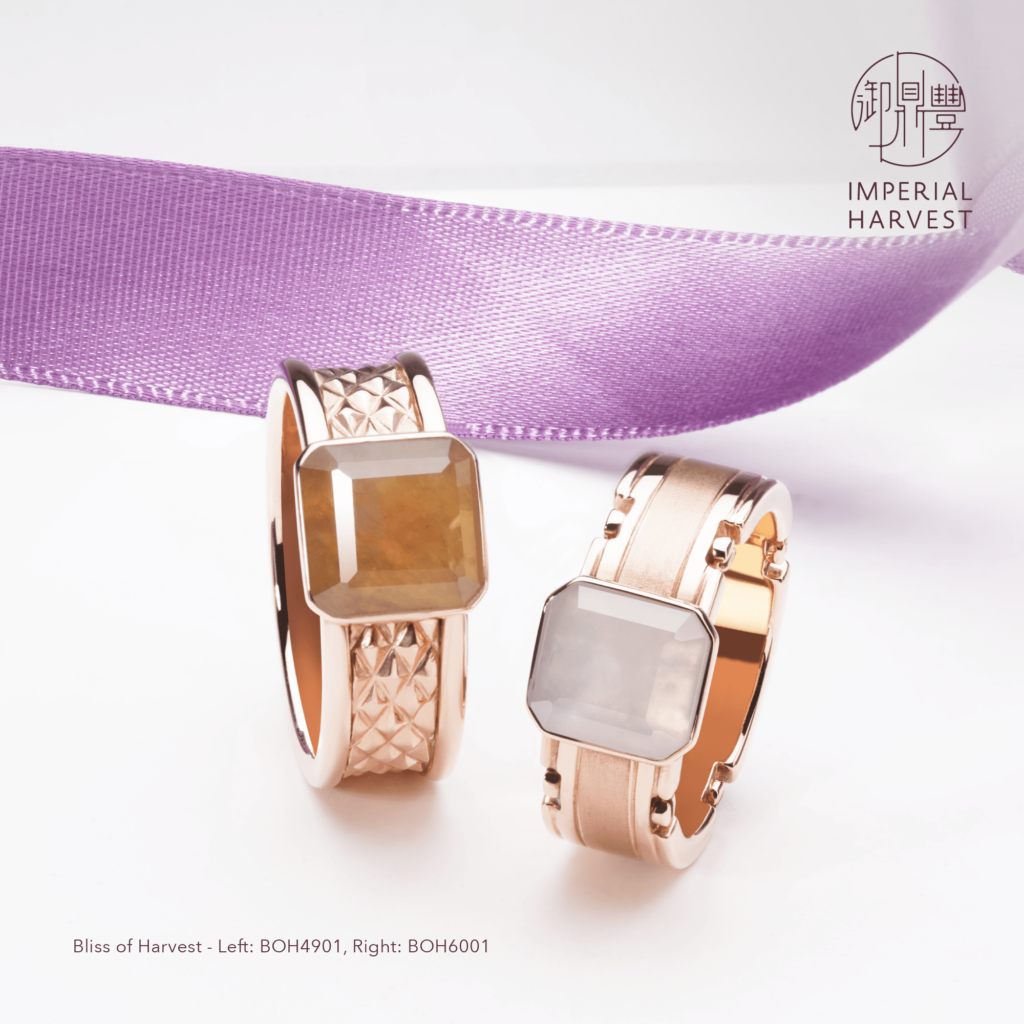 Classically proportioned, the asscher-cut jadeite cabochon is perfectly balanced, with multi-tiered facets that command multiple orders of symmetry to define its dignified and elegant appearance. Conceptualised by Master David and drawing from the Earth’s nurturing environment for growth and progress, the asscher-cut lays solid ground for its destined wearer to achieve future successes and momentous breakthroughs. 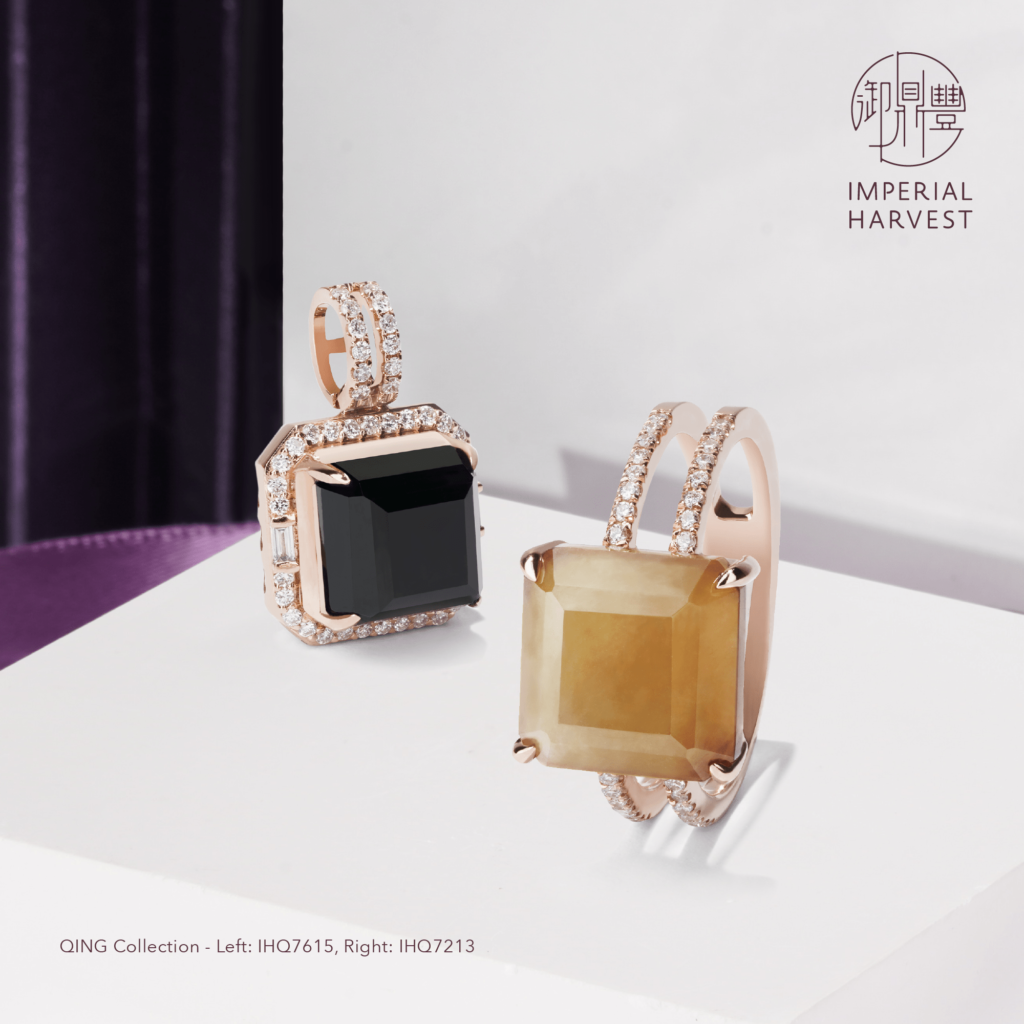 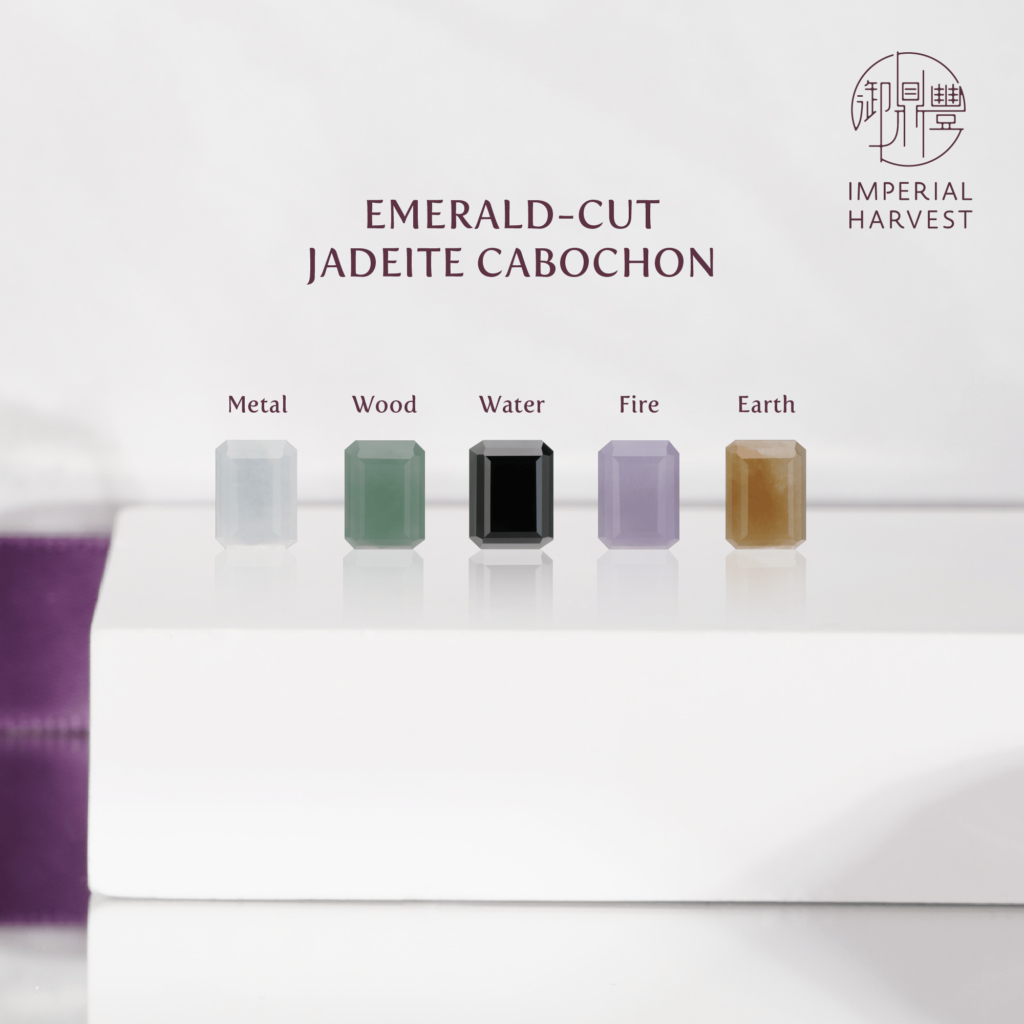 Inspired by the grandeur of the Temple of Heaven, Master David conceptualised Imperial Harvest’s emerald-cut jadeite cabochon with meticulously chamfered multi-tiered facets, giving it a graceful yet streamlined appearance. According to Chinese numerology principles, odd numbers are considered to be heavenly, and therefore auspicious lending to the three distinct tiers of cuts that the emerald-cut jadeite cabochon features. 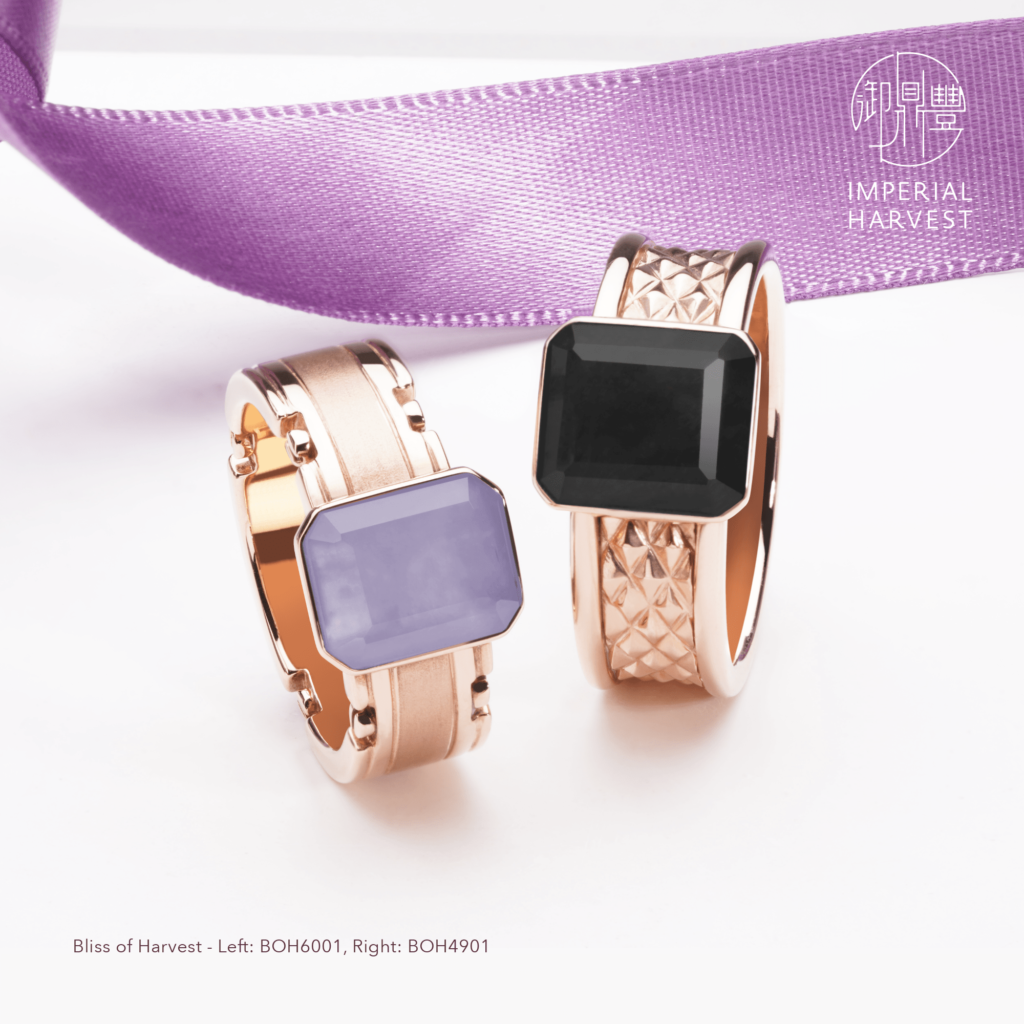 The distinctive cuts of the emerald-cut jadeite cabochon represent the three flights of steps leading up to the Circular Mound Altar in the Temple of Heaven. During the sacred and elaborate imperial winter solstice rites, the Emperor ascended these steps to conduct prayers for continued prosperity and blessings for the future. Likewise, the emerald-cut jadeite cabochon was designed to inspire its destined wearer to step up to life’s challenges and scale the summit of their unlimited human potential. 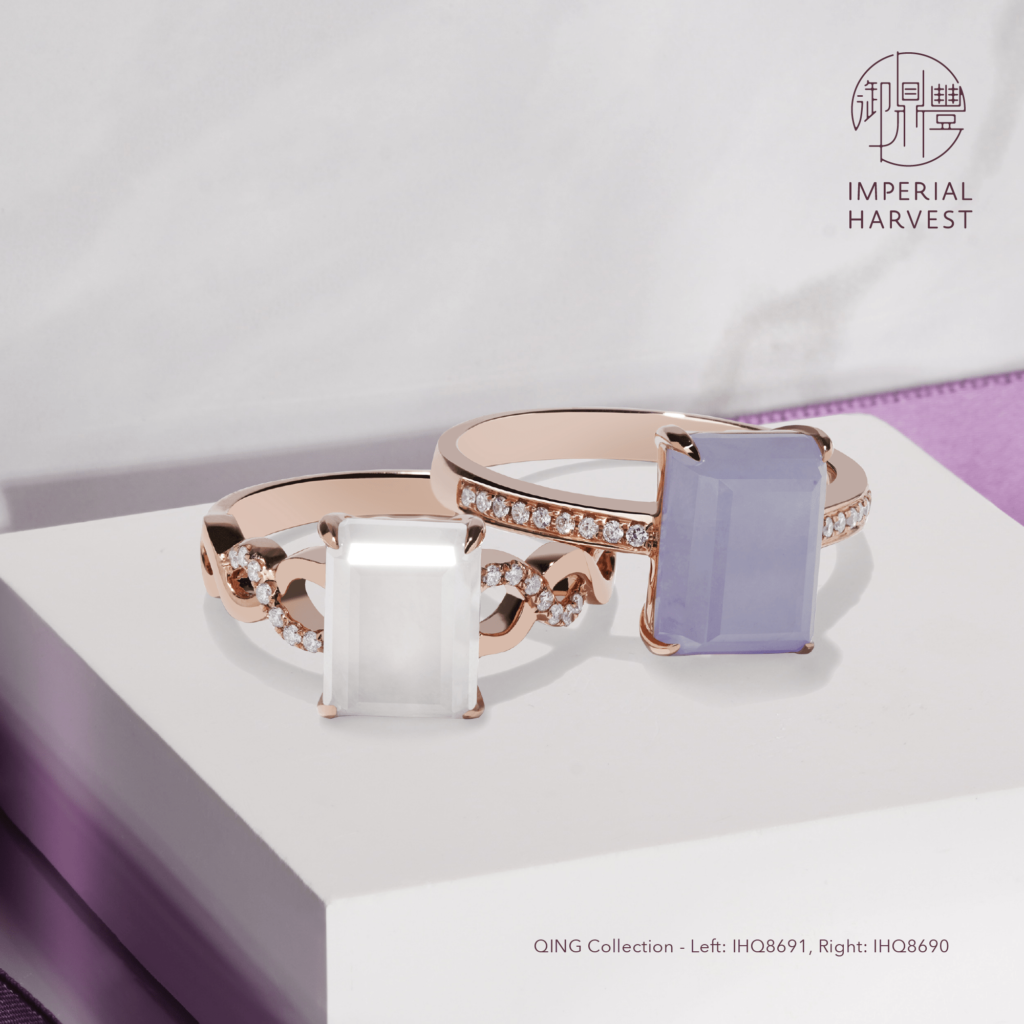 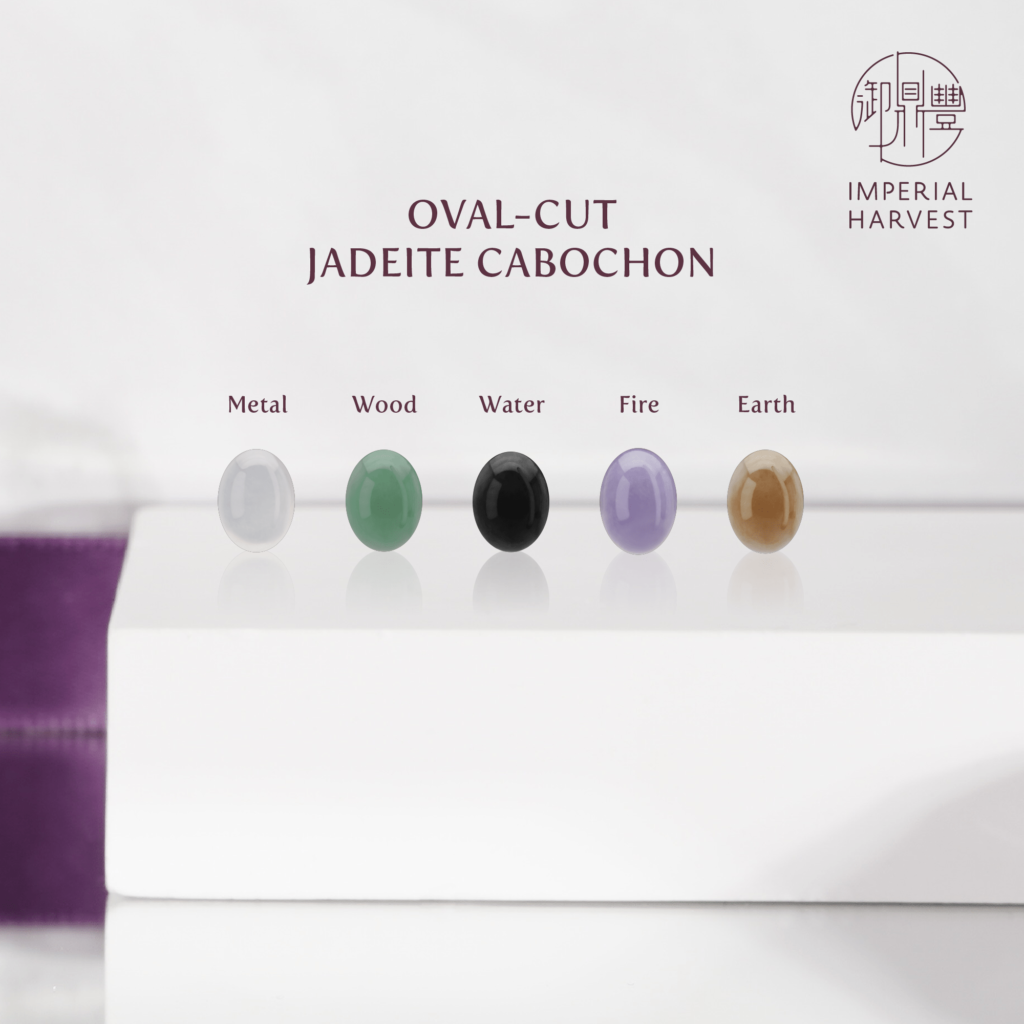 The embodiment of intense fire and brilliance, Imperial Harvest’s oval-cut jadeite cabochon features a modified brilliant-cut, with a symmetrical and elongated rounded shape that emphasises the jadeite cut’s clarity and natural depth of colour. 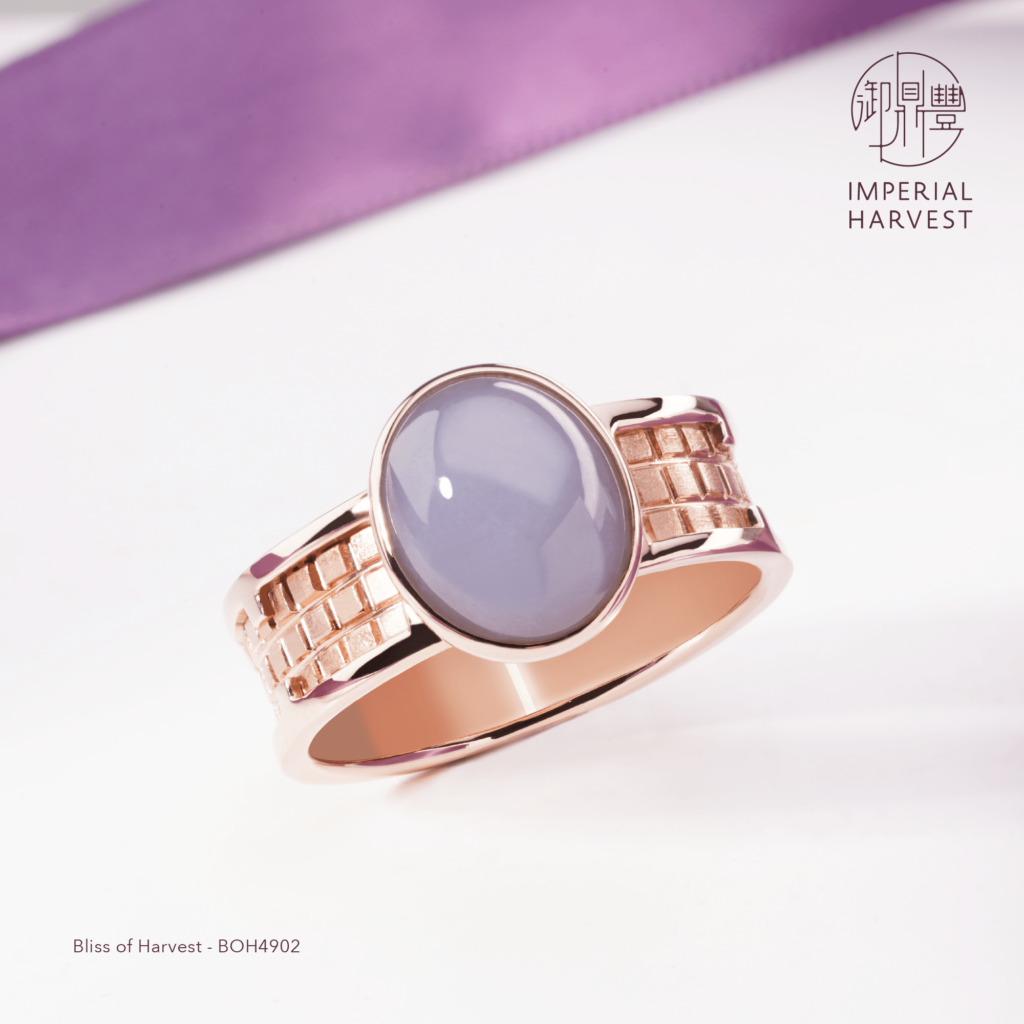 Inspired by new beginnings and a world of endless possibilities, the oval-cut jadeite cabochon imparts a wealth of grace and sophistication to its destined wearer. In conveying his wishes of success for Imperial Harvest’s blessed clientele, Master David designed this jadeite cut to bestow upon its wearer auspicious luck, benefactor support and prosperity. 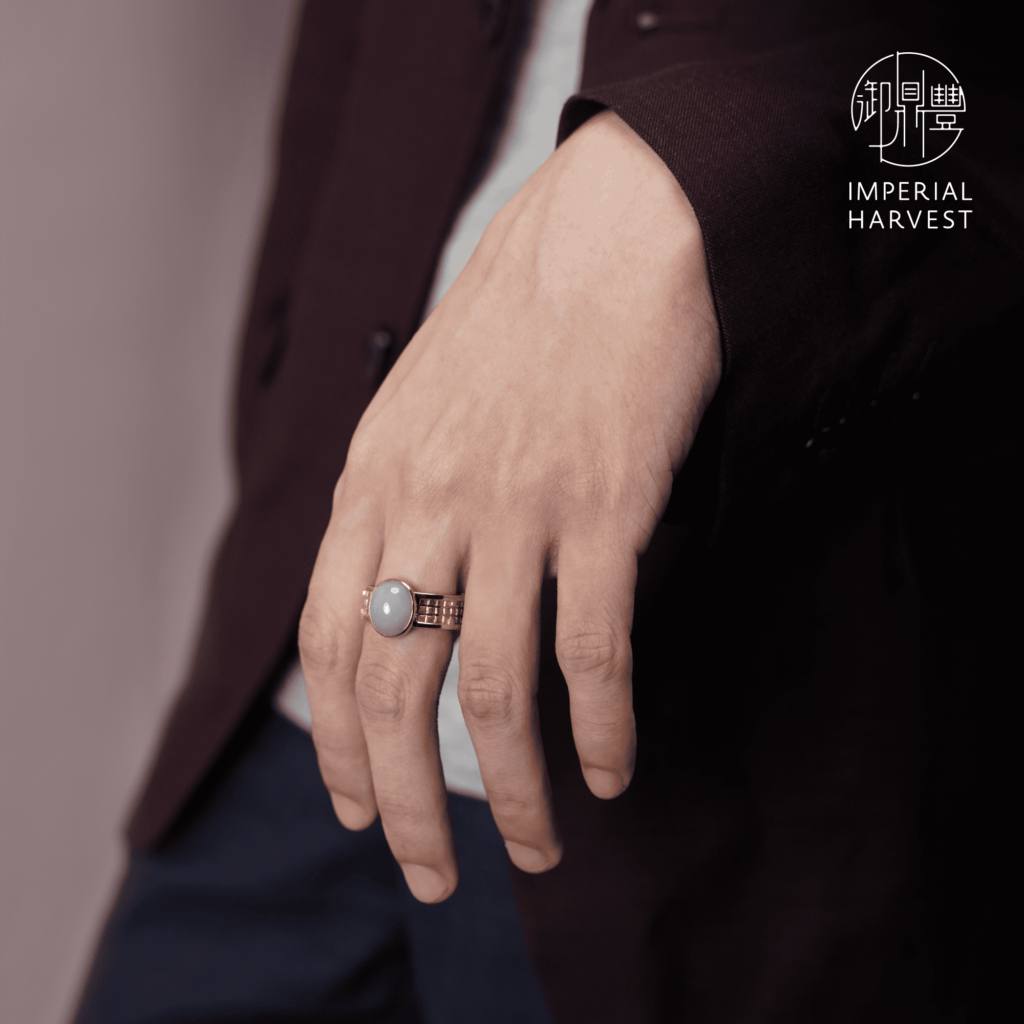 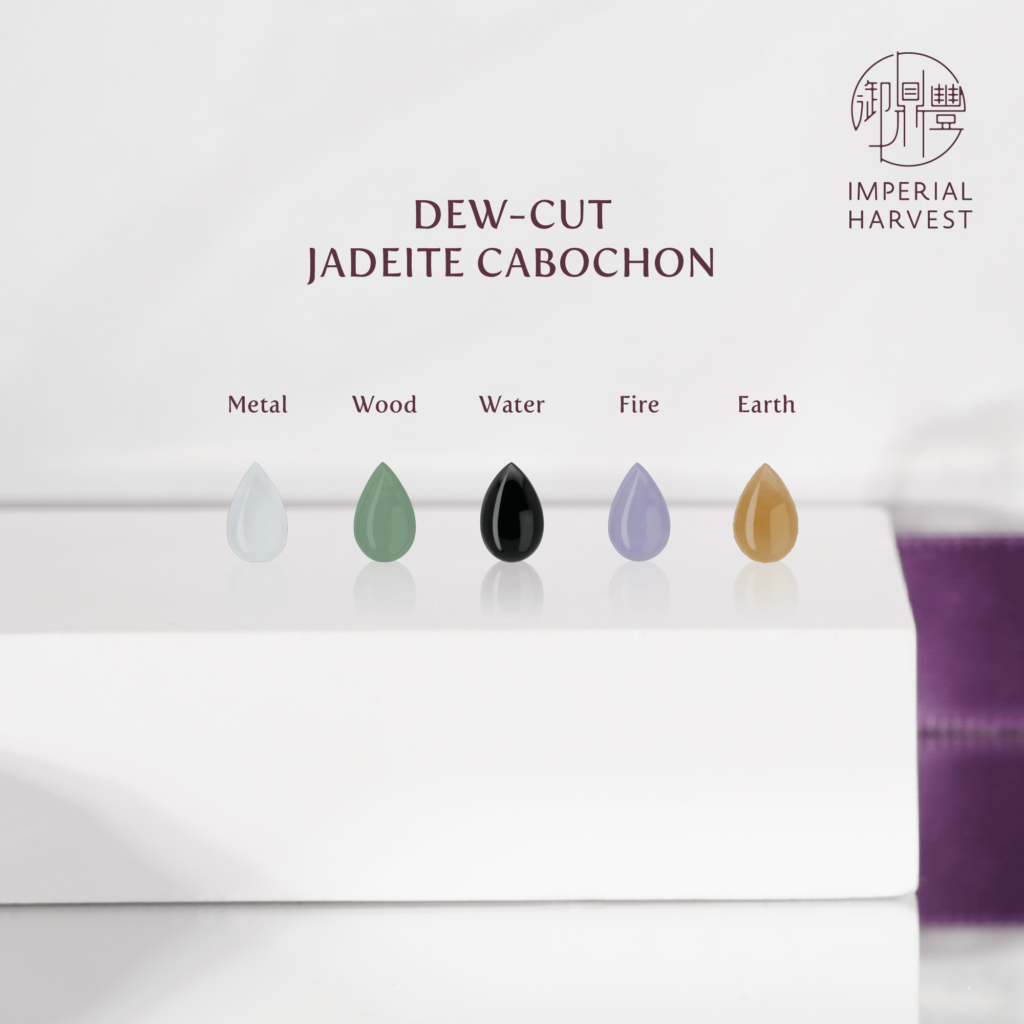 Imperial Harvest’s dew-cut jadeite cabochon alludes to China’s history as an agricultural society, and the blessing of rain upon the agrarian lifestyle. Rain is of paramount importance in agriculture, with the bountiful harvest it brings being a strong indication of Chinese emperors’ mandate to rule. 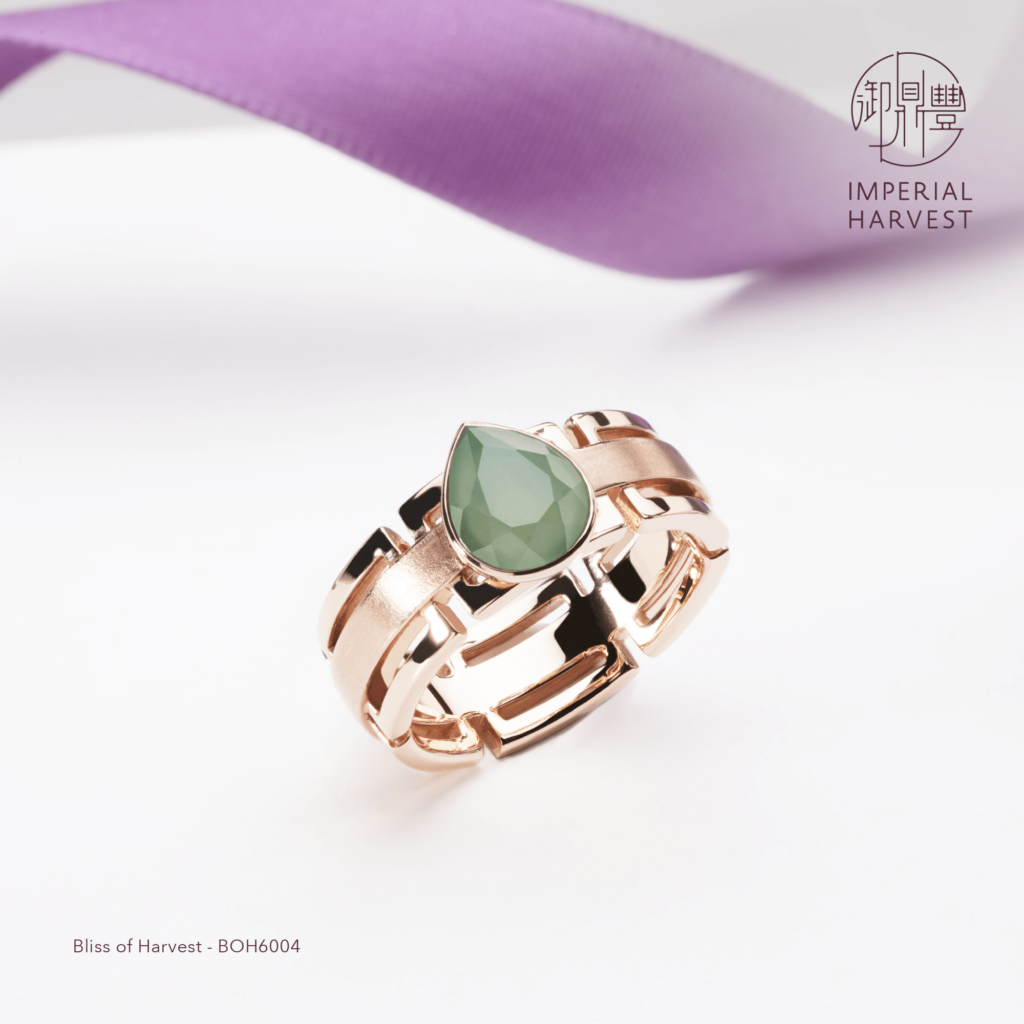 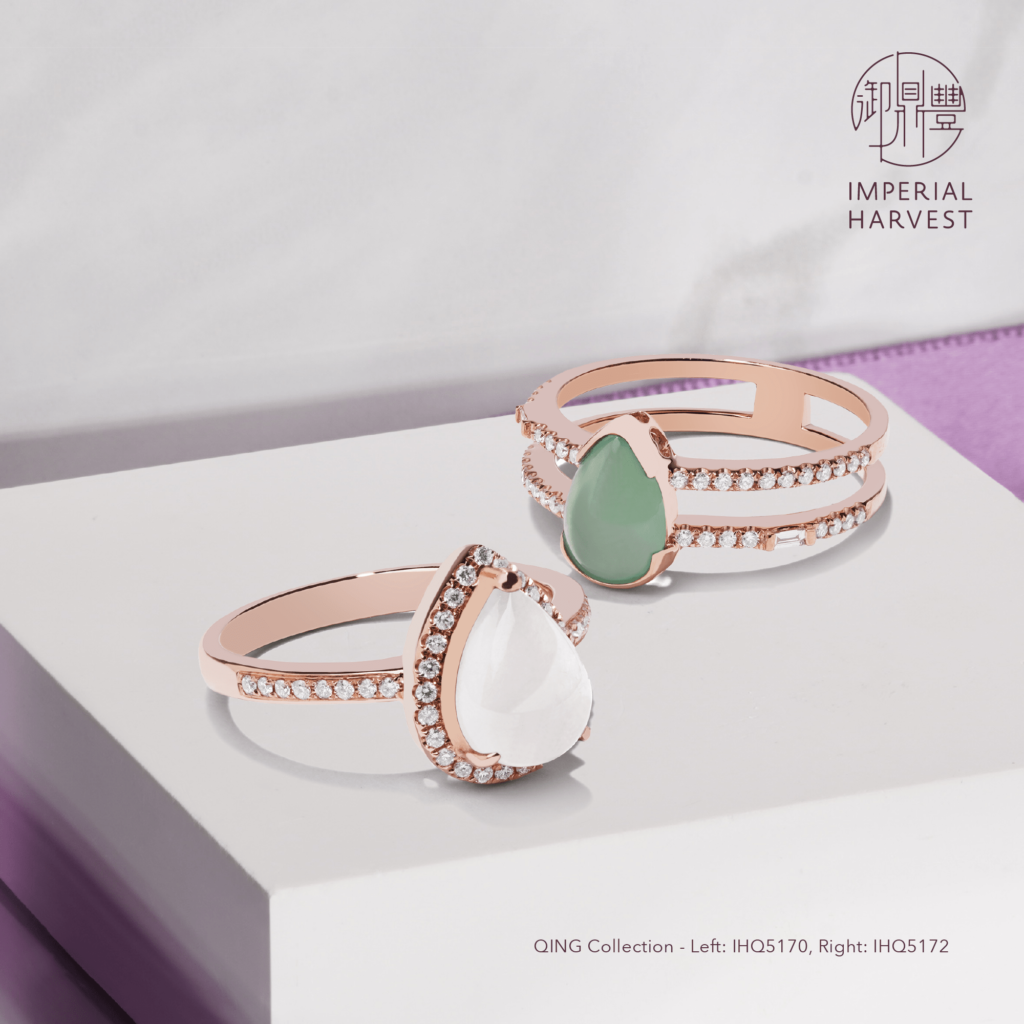 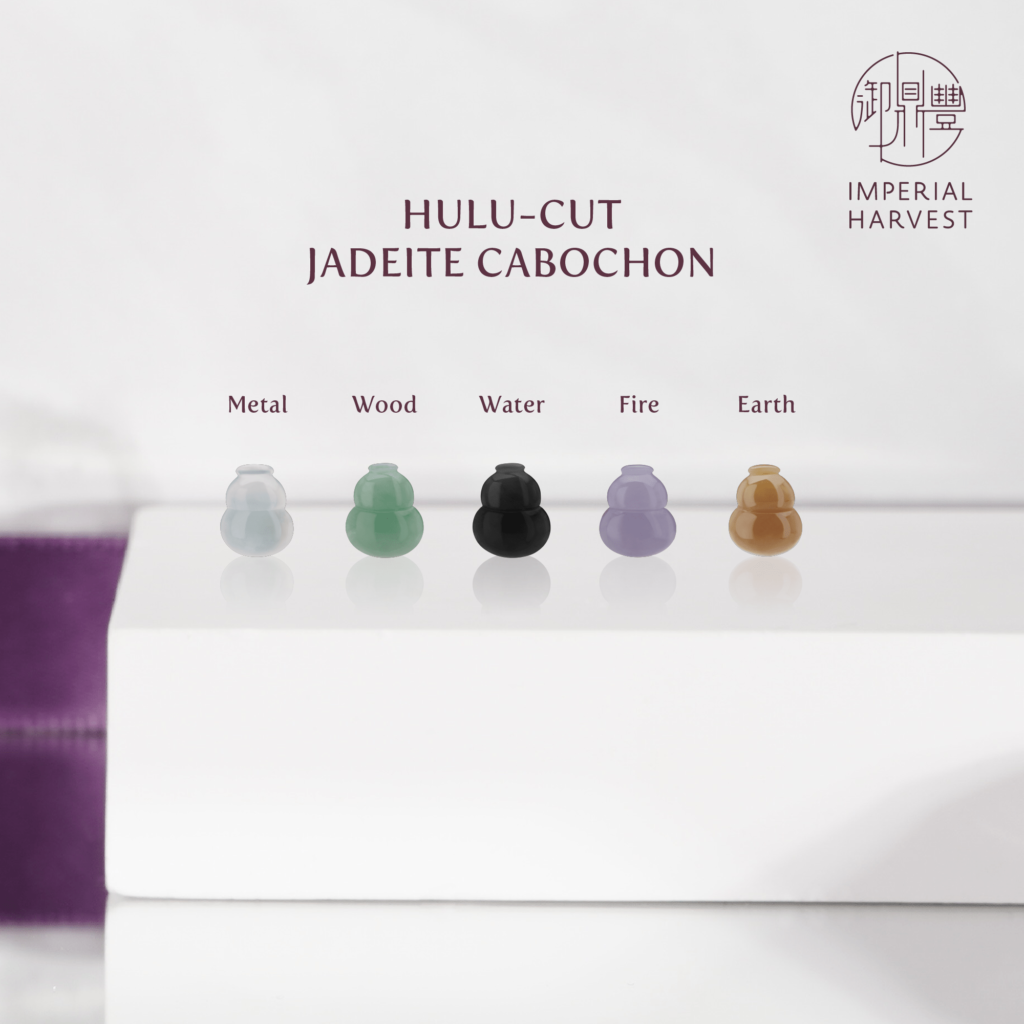 The hulu (葫芦), also known as a calabash gourd, is an iconic Chinese symbol of auspiciousness, prosperity and continuous growth. Its signature rounded shape often alludes to the unification and synchronicity between Heaven and Earth – emblematic of wholeness, completion and harmony. 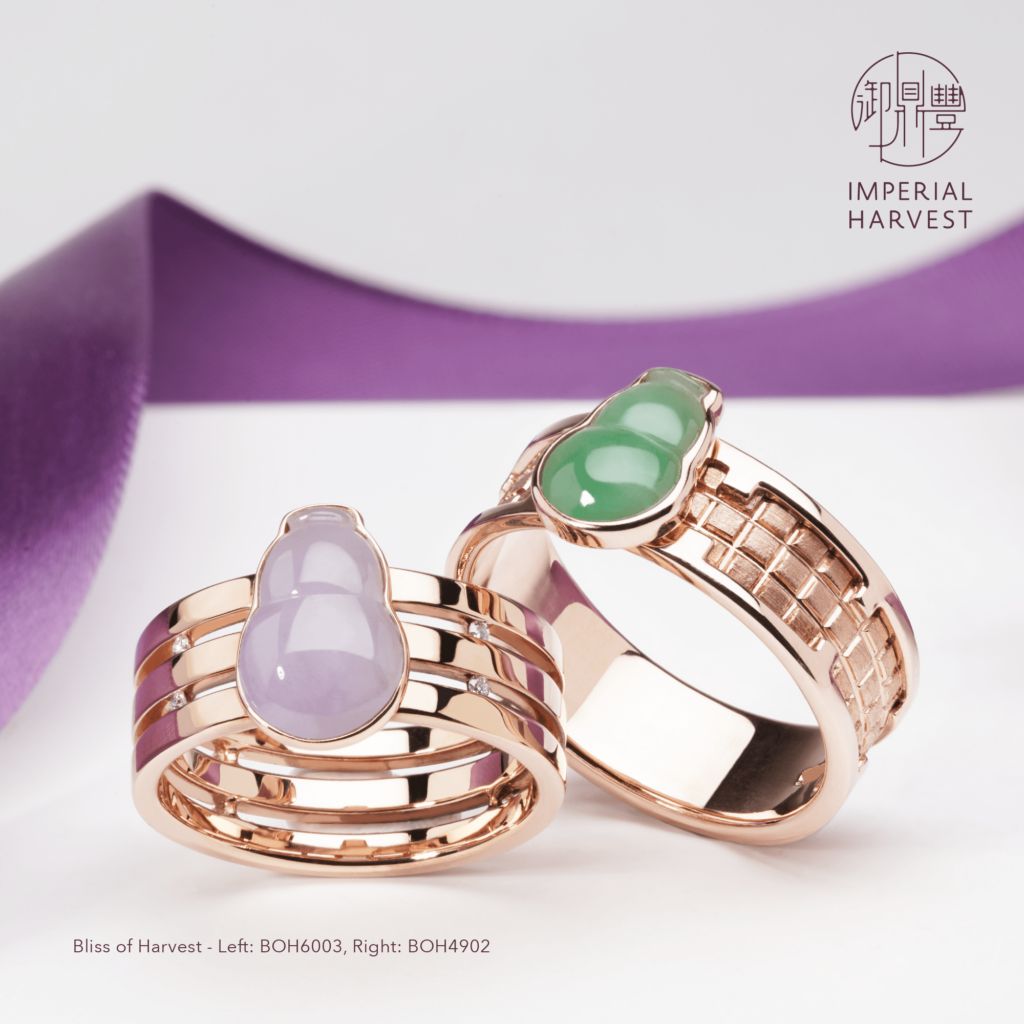 Imperial Harvest’s innovative hulu-cut jadeite is a contemporary ode to this traditional Chinese icon, inspiring its destined wearer to overcome their adversities, conquer their fears and achieve their infinite potential, exponential growth and breakthrough successes. 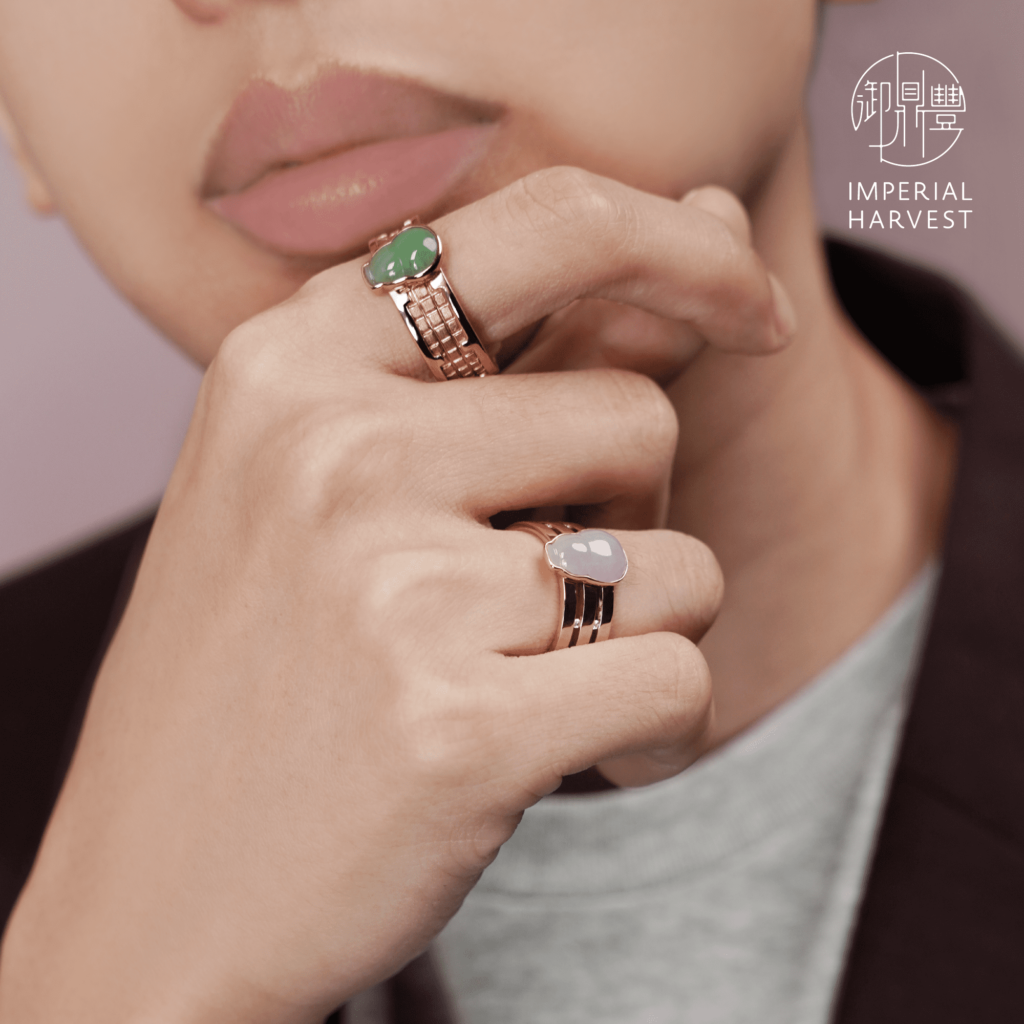