Tua Di Ya Pek is revered as a powerful wealth god capable of bestowing powerful blessings of indirect luck. Bearing great influence on the success of devotees, Tua Di Ya Pek empowers them to determine lucrative opportunities and winning investments, allowing them to generate explosive returns and windfalls to further acquire their assets. 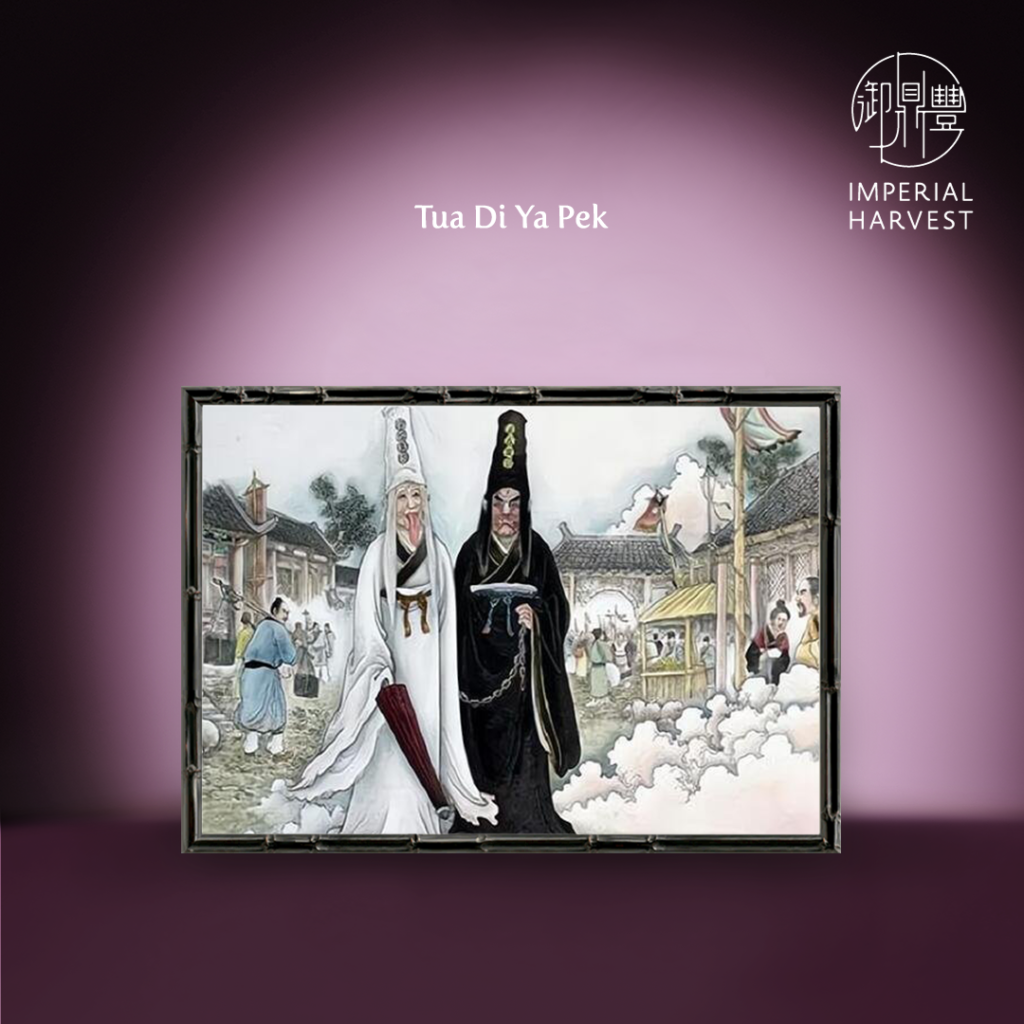 What is indirect wealth (偏财库)?

As one of the foremost indirect wealth gods, Tua Di Ya Pek governs indirect wealth luck, which encompasses the income that an individual derives from their stock or cryptocurrency investments, trading profiles, and other infrequent sources of income. This sizable, yet unexpected nature of such sources of wealth often brings an individual immense returns and is also referred to as Windfall wealth.

As a leading premier in Imperial Feng Shui, Imperial Harvest holds the principles of this noble art form at its core, greatly ascribing to the groundbreaking discoveries by the masters of the Chinese dynastic court. Through rigorous research, their findings revealed sandalwood’s unrivalled ability to balance the Minor Yin (少阴), thereby creating and amplifying its destined owners’ indirect wealth capacity.

Guided by the findings of these eminent scholars, and drawing from his own Imperial Feng Shui expertise, Master David conceptualised the Imperial Harvest Sandalwood Tua Di Ya Pek — making for an exceptionally powerful treasure. 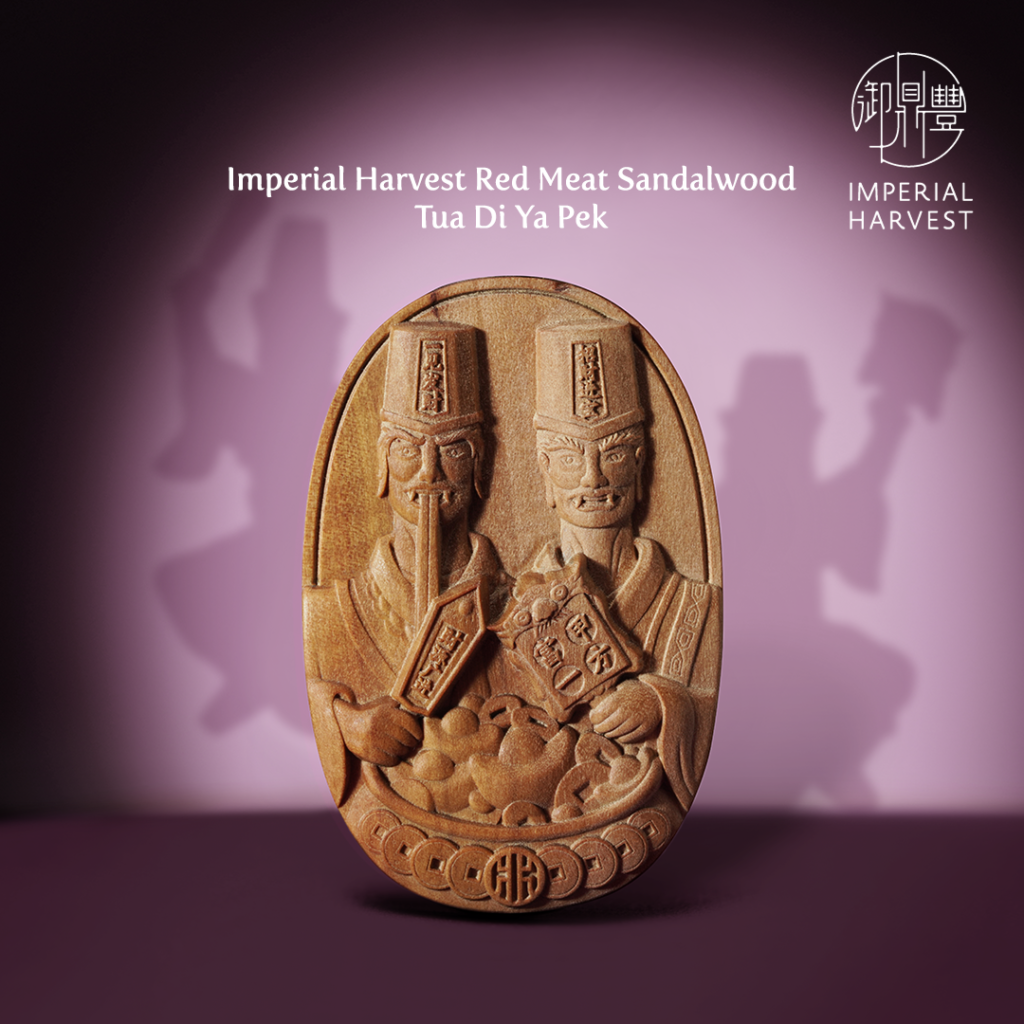 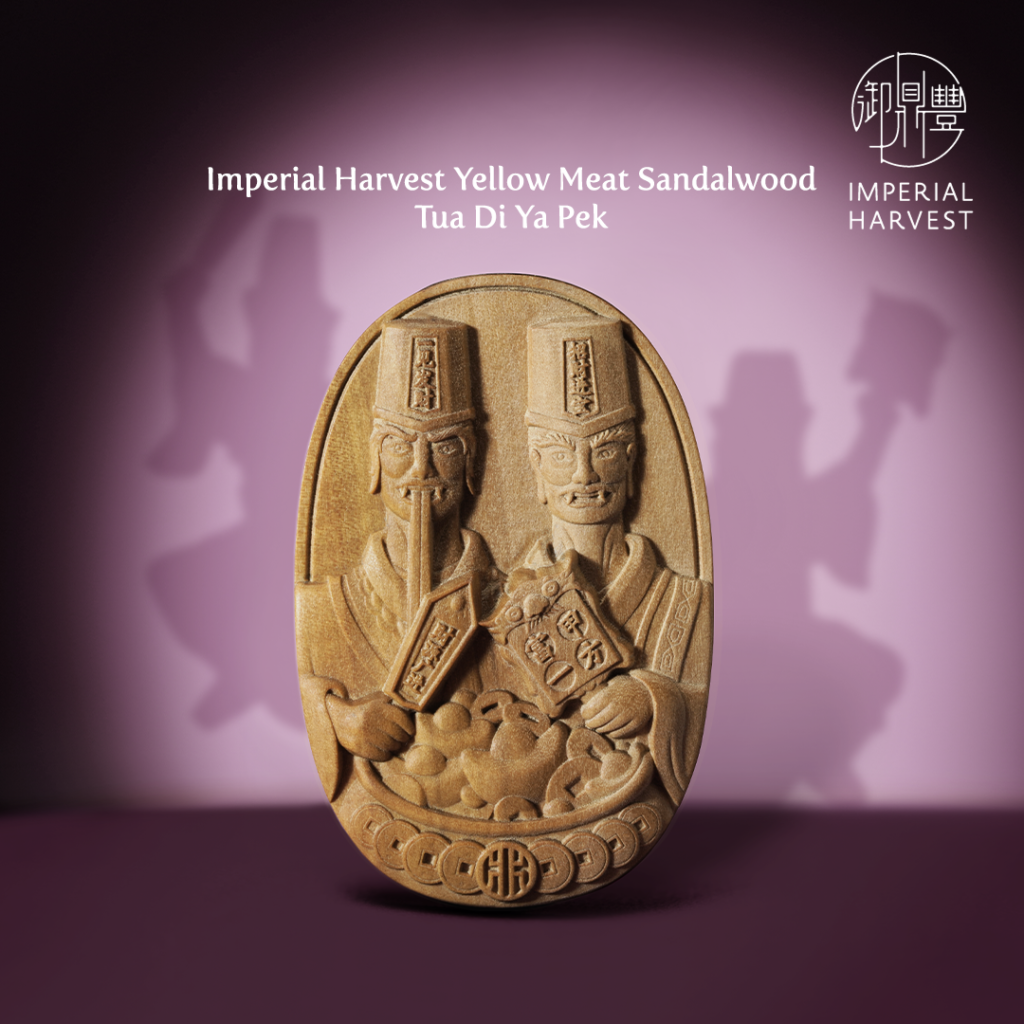 This exquisite collection features both Yellow Meat and Red Meat sandalwood varieties derived from rare India Old Mountain sandalwood trees at least 80 years of age. Found in the deep forests of Southern Asia, these sandalwood varieties are potent wealth remedies in their own right. They powerfully expand their destined owners’ indirect wealth capacity, bringing about breakthroughs and consistent accumulation of wealth in their financial portfolios. 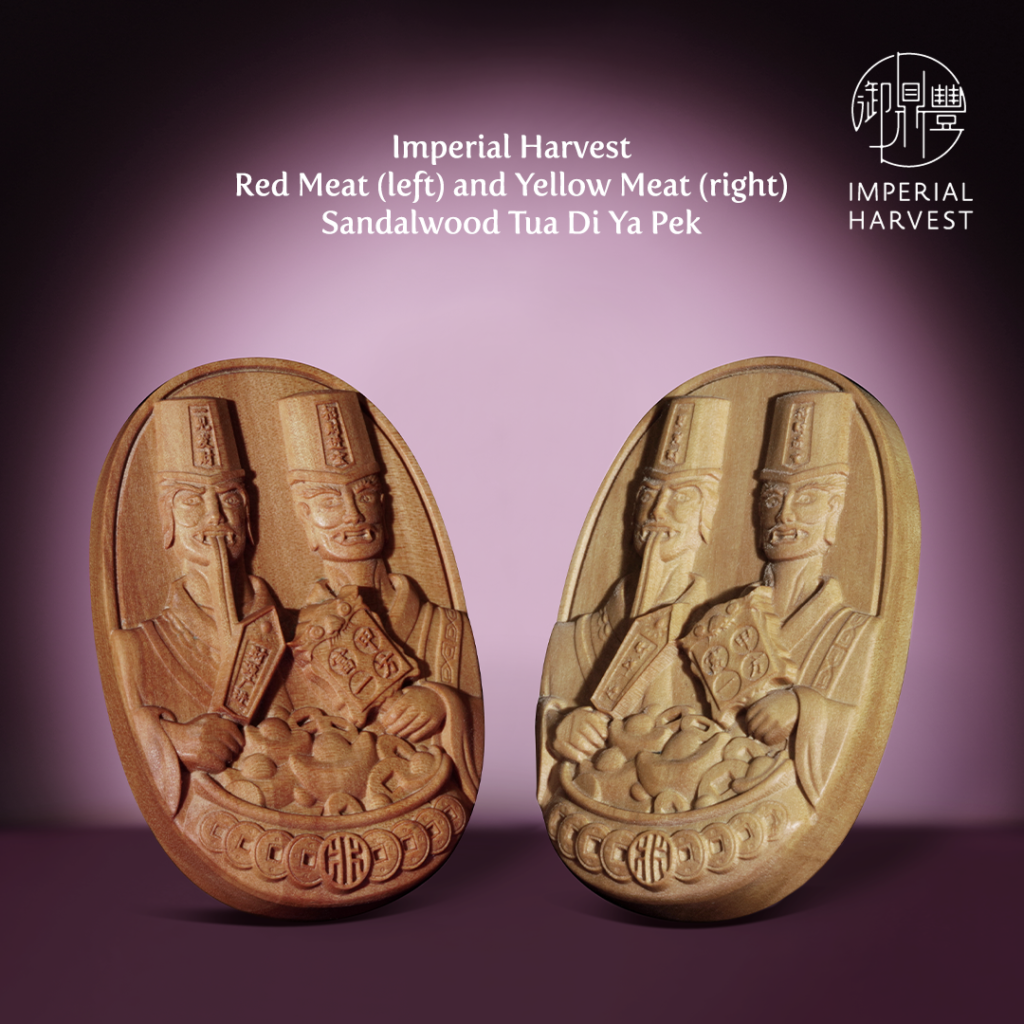 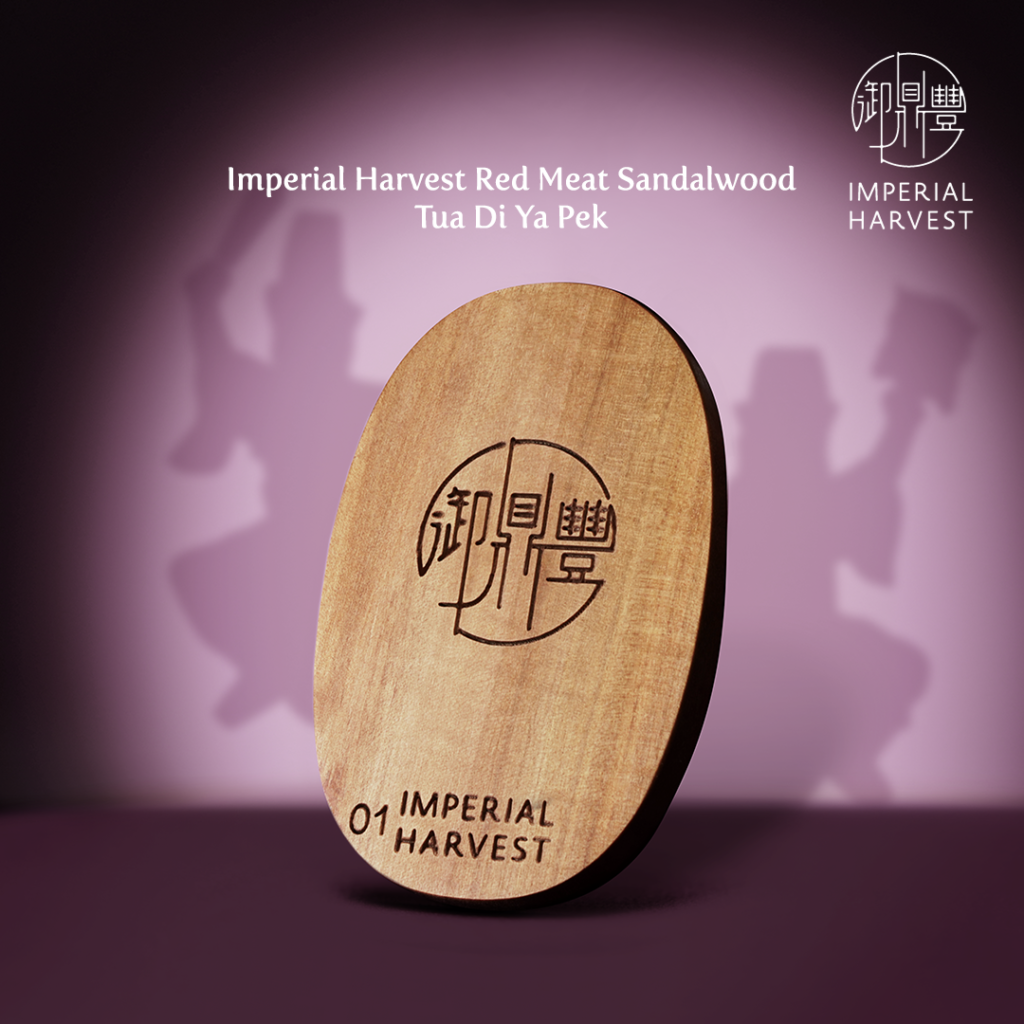 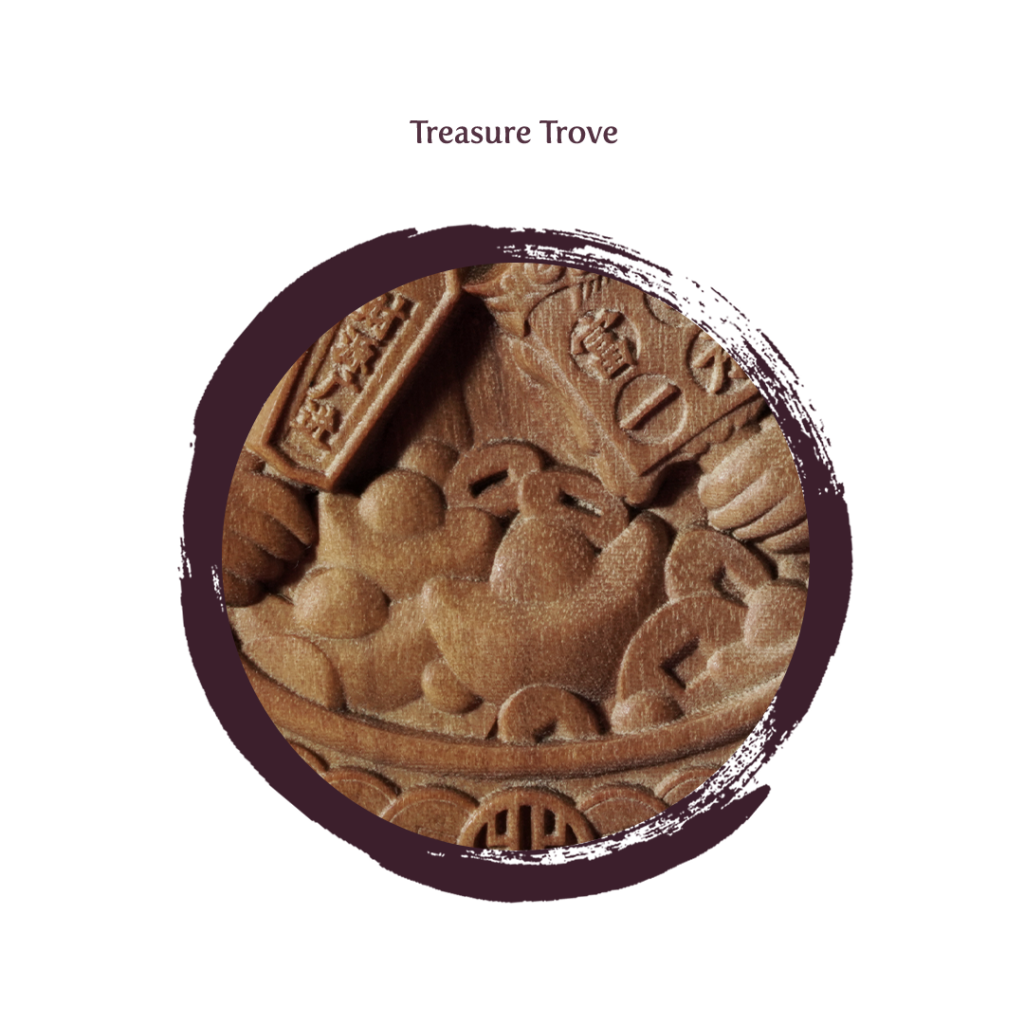 Brimming with gold ingots and coins, the Treasure Trove featured on the Imperial Harvest Sandalwood Tua Di Ya Pek is overflowing with wealth — symbolic of great abundance and prosperity. The gold ingots are a testament to intuitive sense, fostering its destined owners’ ability to discern the key trends and act on strategic opportunities that present themselves. As a potent amplifier of wealth, the Treasure Trove retains its destined owner’s wealth, as well as grows and accumulates it to allow them to accomplish their greatest goals. 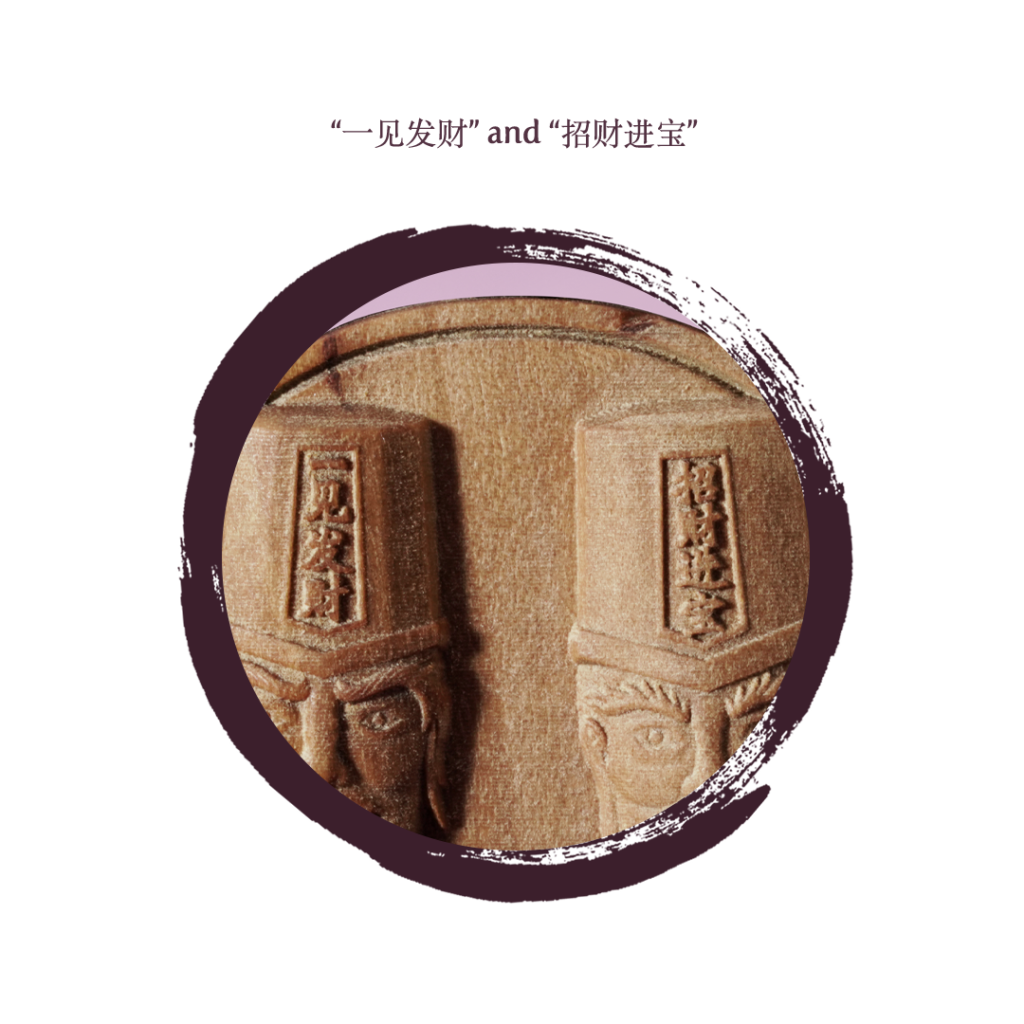 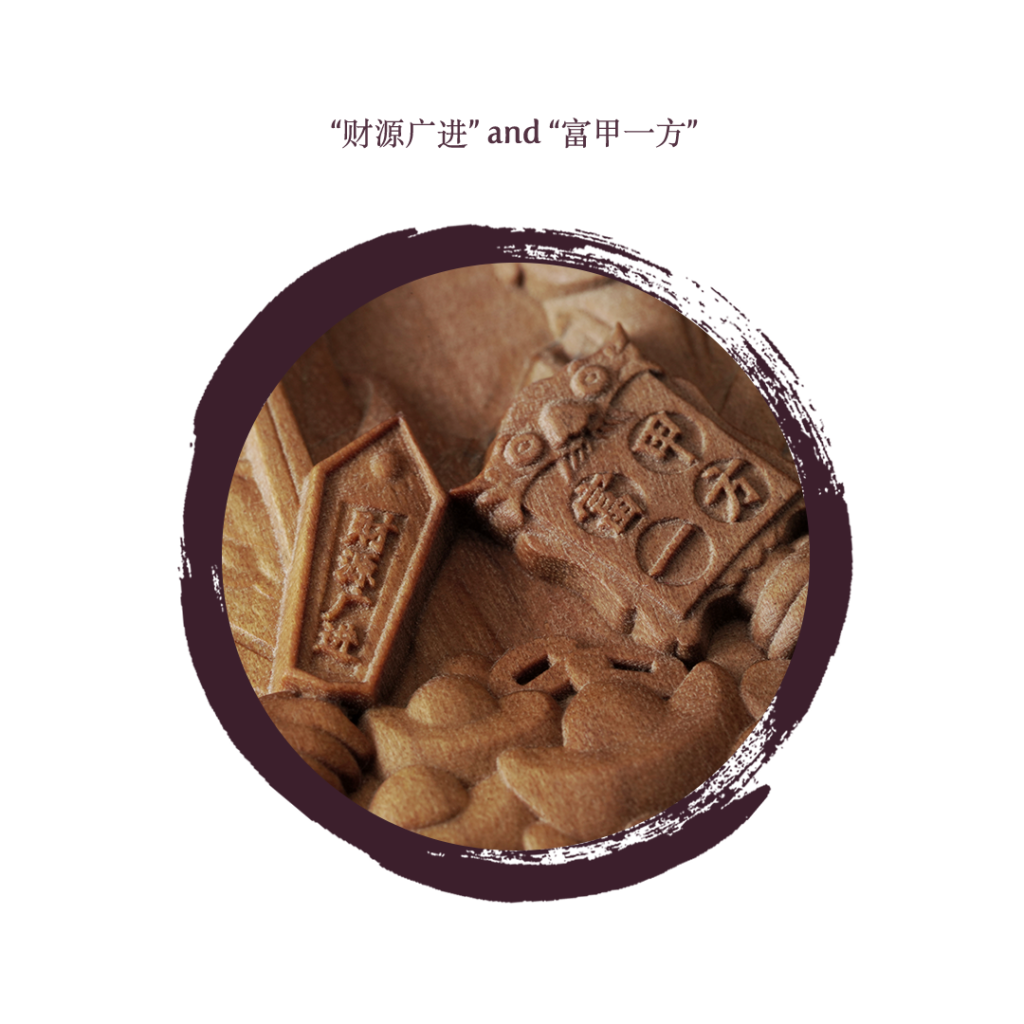 Standing on the left, this depiction of Tua Ya Pek dons a hat with the phrase, “一见发财”, and while wielding a tablet with the inscription, “财源广进”. To the destined owner, these auspicious emblems are a testament to their prosperity at first sight, with abundant wealth being ushered in from all directions.

On the right, Di Ya Pek similarly dons a hat with the Chinese idiom, “招财进宝” and holds a fan bearing the phrase, “富甲一方”. These symbols of prosperity command the arrival of massive fortunes, allowing greater riches to accumulate. These emblems oversee intuitive sense in its destined owner, allowing them to leverage an abundance of investment opportunities amidst treacherous financial markets. 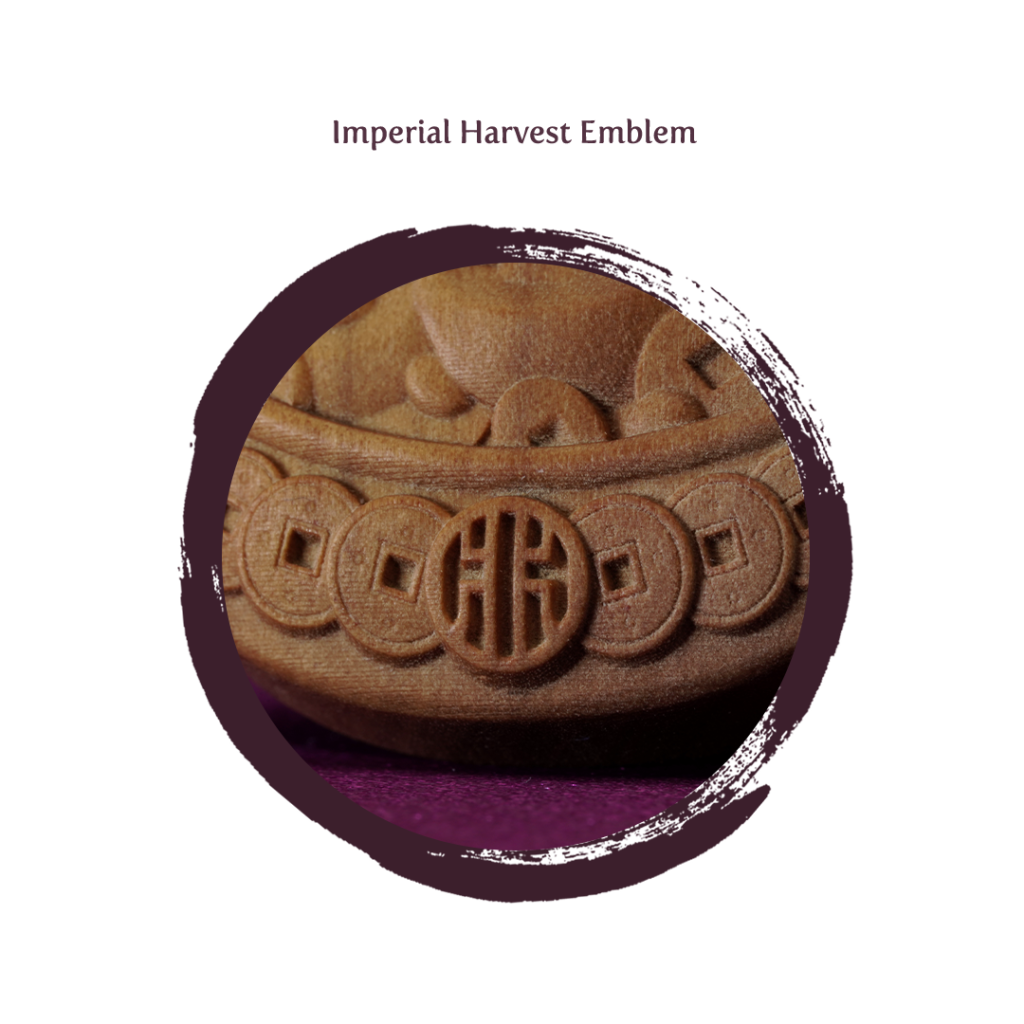 The Treasure Trove is framed by a string of gold coins, of which the patented Imperial Harvest Emblem takes centre stage. This exquisite mark of excellence is the latest addition to Imperial Harvest, featuring a stylised rendition of the Chinese character, “鼎”. This character draws on the prestige of the ceremonial Ding cauldrons it references, endowing its destined owner with great prosperity and the omnipotence of Imperial Feng Shui.