Imperial Harvest Sandalwood in the Season of Indirect Wealth

Reflecting a period of great significance for Chinese communities around the world, the seventh lunar month marks an auspicious season of indirect wealth.

Ranking amongst the most valued woods in the world with a long and sacred history, sandalwood was revered in Chinese culture for its impressive fragrance, understated elegance and formidable Imperial Feng Shui properties.

Across the annals of Chinese history, sandalwood was sought after by Chinese royalty and circles of high nobility, who donned pendants and beads made of this exquisite material to enhance their indirect wealth luck. 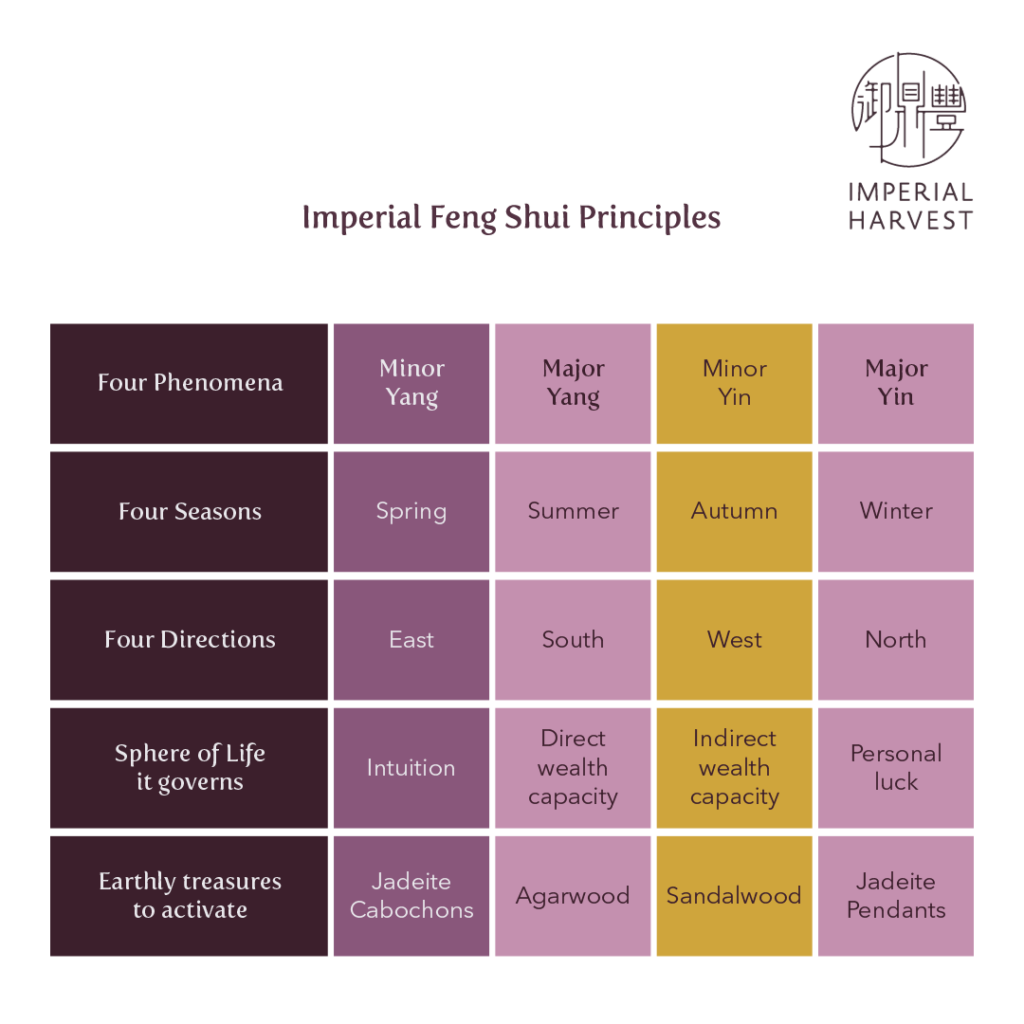 In Imperial Feng Shui, indirect wealth capacity refers to the income that an individual derives from secondary or supplementary sources of income — namely their stock investments, trading profiles, or even the lottery. Also referred to as windfall wealth, individuals with enhanced indirect wealth capacities can experience consistent growth and maintain financial stability throughout turbulent, constantly changing financial situations. 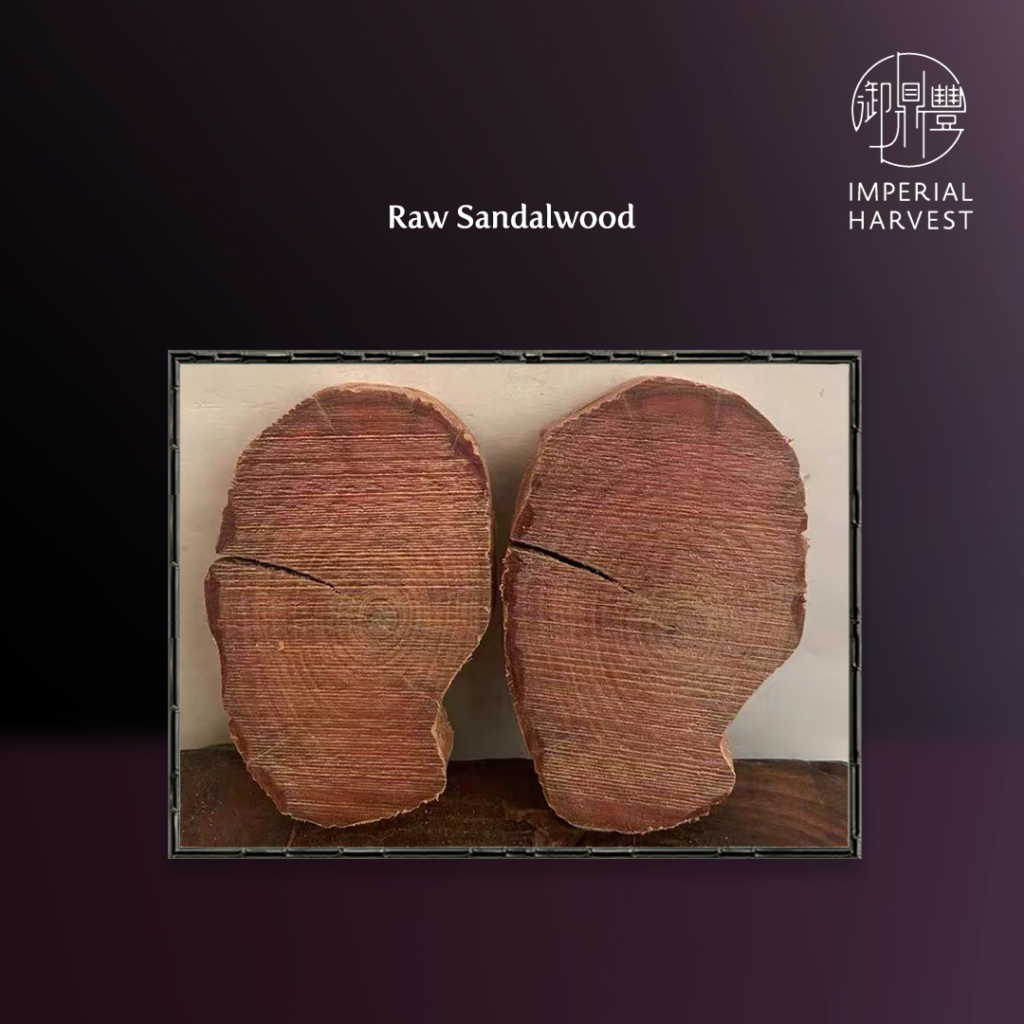 Once harvested, the raw sandalwood is then transported to Imperial Harvest’s dedicated workshop facilities, and stored only at designated indirect wealth sectors within the workshop. There, it absorbs prosperous indirect wealth energies in an entirely natural and organic ageing process.

A perfect complement to this season of indirect wealth, Imperial Harvest’s varied collections of sandalwood treasures amplify the indirect wealth capacity of its destined owner.

The fundamental tier of India Old Mountain Sandalwood at Imperial Harvest, the Yellow Meat variety is unique in that it is freshly logged without undergoing any significant periods of ageing. As such, the fragrance it emanates is stronger and more pervasive when compared to other types of sandalwood. Taking after its title, the Yellow Meat variety of sandalwood bears a pleasant faint-yellow colouring. 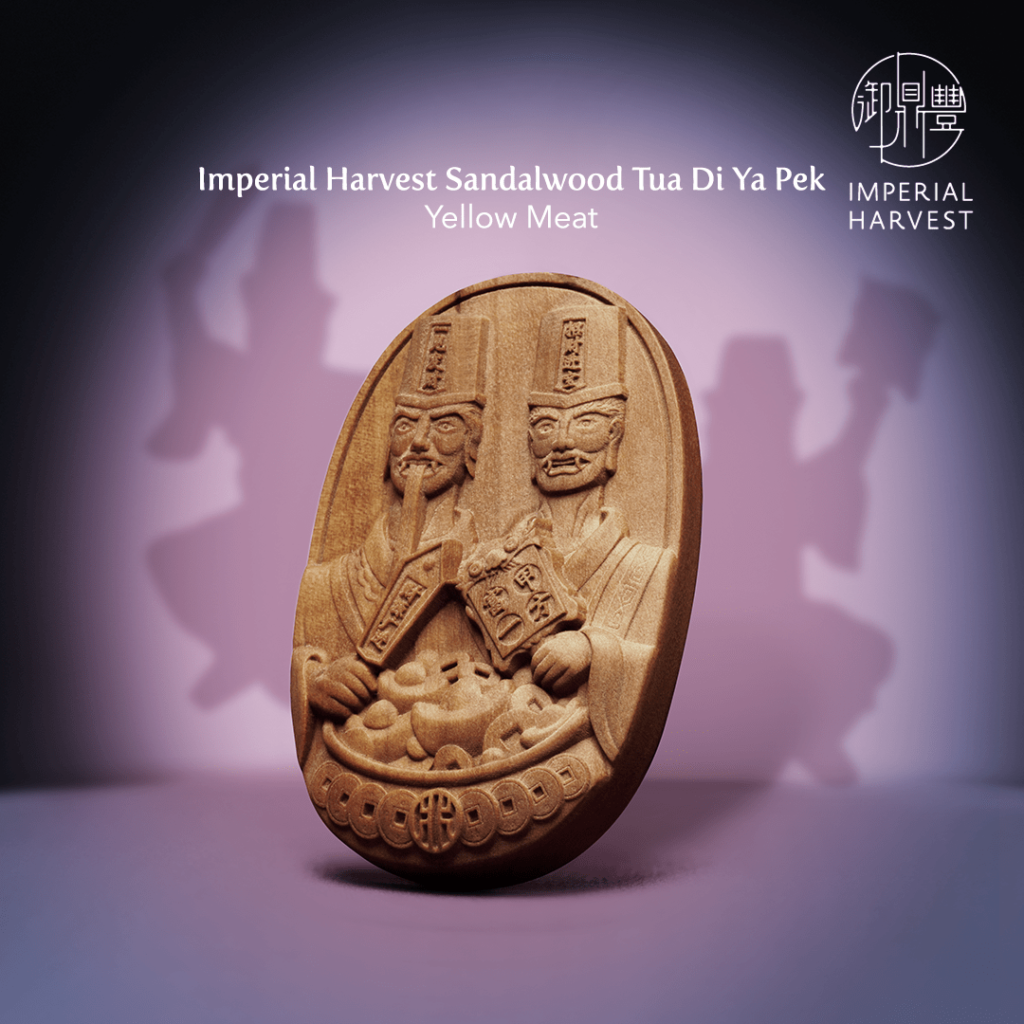 An exclusive launch, the Imperial Harvest Sandalwood (Yellow Meat) Tua Di Ya Pek captures the visage of the Investment Wealth God in meticulous detail. As one of the foremost indirect wealth gods, Tua Di Ya Pek is capable of bestowing powerful blessings of indirect wealth luck, guiding devotees toward great successes in their investments and trading endeavours.

This exquisite collection features Yellow Meat sandalwood varieties that profoundly expand the indirect wealth capacity of its destined owners, bringing about breakthroughs and consistent accumulation of wealth in their financial portfolios. Its design incorporates multiple emblems of wealth to inspire an abundance of wealth in its destined owner.

The second-most premium tier of sandalwood available at Imperial Harvest, the India Old Mountain Sandalwood (Red Meat) features a gentle and soothing fragrance. It undergoes an ageing process spanning up to 30 years, resulting in its signature reddish hues and a hint of black underlying its colour. 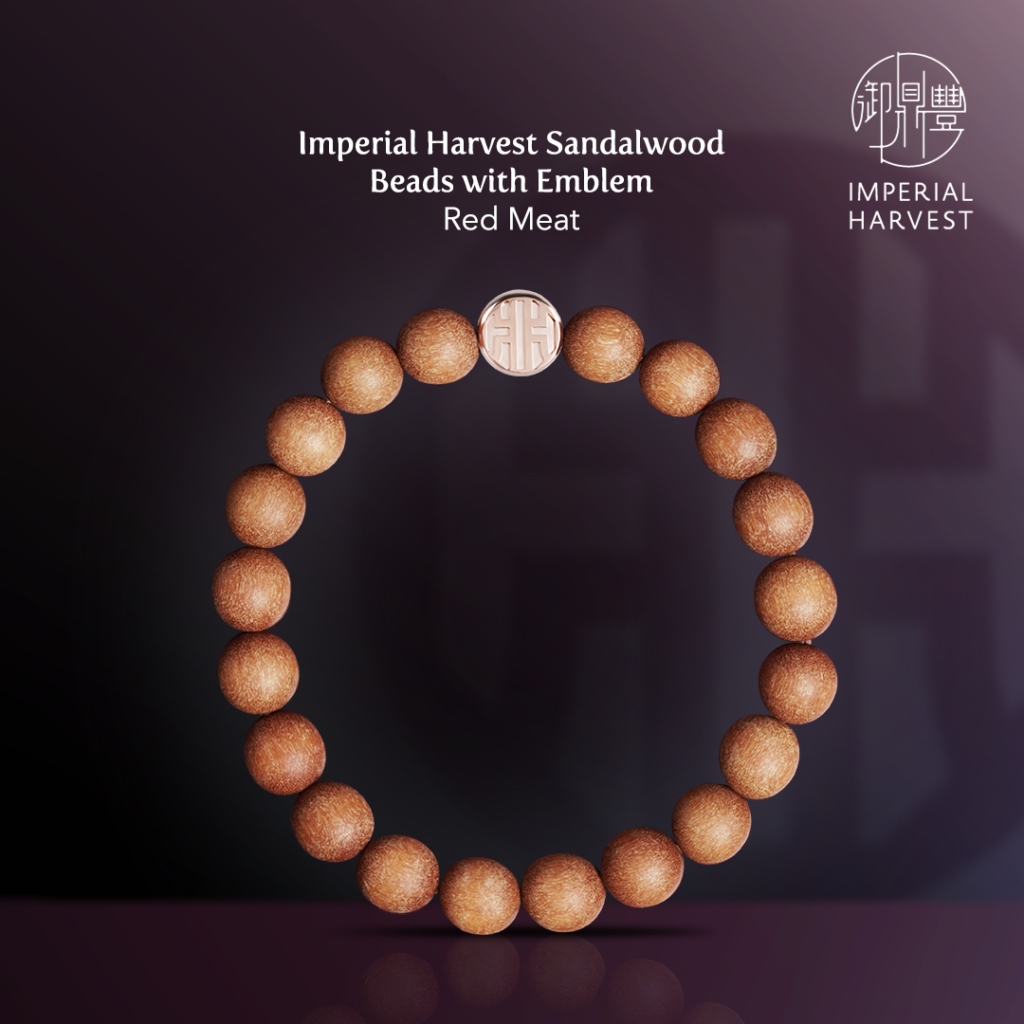 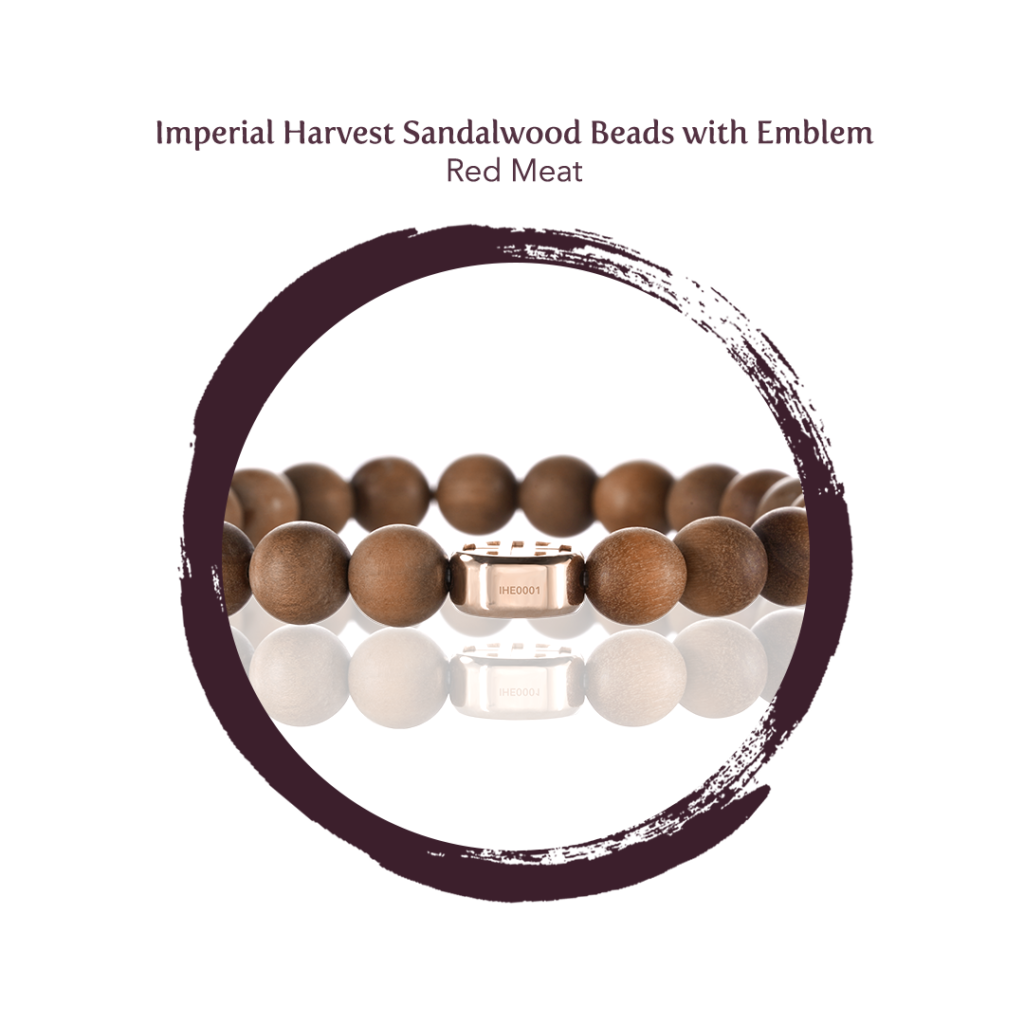 Entirely shaped and polished by hand, every Imperial Harvest sandalwood bead is created from only the finest raw sandalwood available. With an understated elegance, the Imperial Harvest Sandalwood (Red Meat) Beads Bracelet powerfully expands the indirect wealth capacity, bringing breakthrough growth and accumulation of wealth in their financial portfolios.

Emblazoned with the Imperial Harvest Emblem, this exquisite hallmark serves as a seamless addition to the appearance of any Imperial Harvest Sandalwood (Red Meat) Beads Bracelet. Contrasting beautifully against the organic beads, this 18K gold charm embodies all that Imperial Harvest stands for in design excellence.

Highly prestigious and sought-after, India Old Mountain Sandalwood (Black Meat) is the epitome of premium sandalwood available at Imperial Harvest. Undergoing a lengthy ageing process that spans at least 30 years, the Black Meat variety of sandalwood boasts an exceptionally rich and dark resin. This, coupled with its pleasant yet lasting fragrance makes up one of the rarest varieties of sandalwood available today. 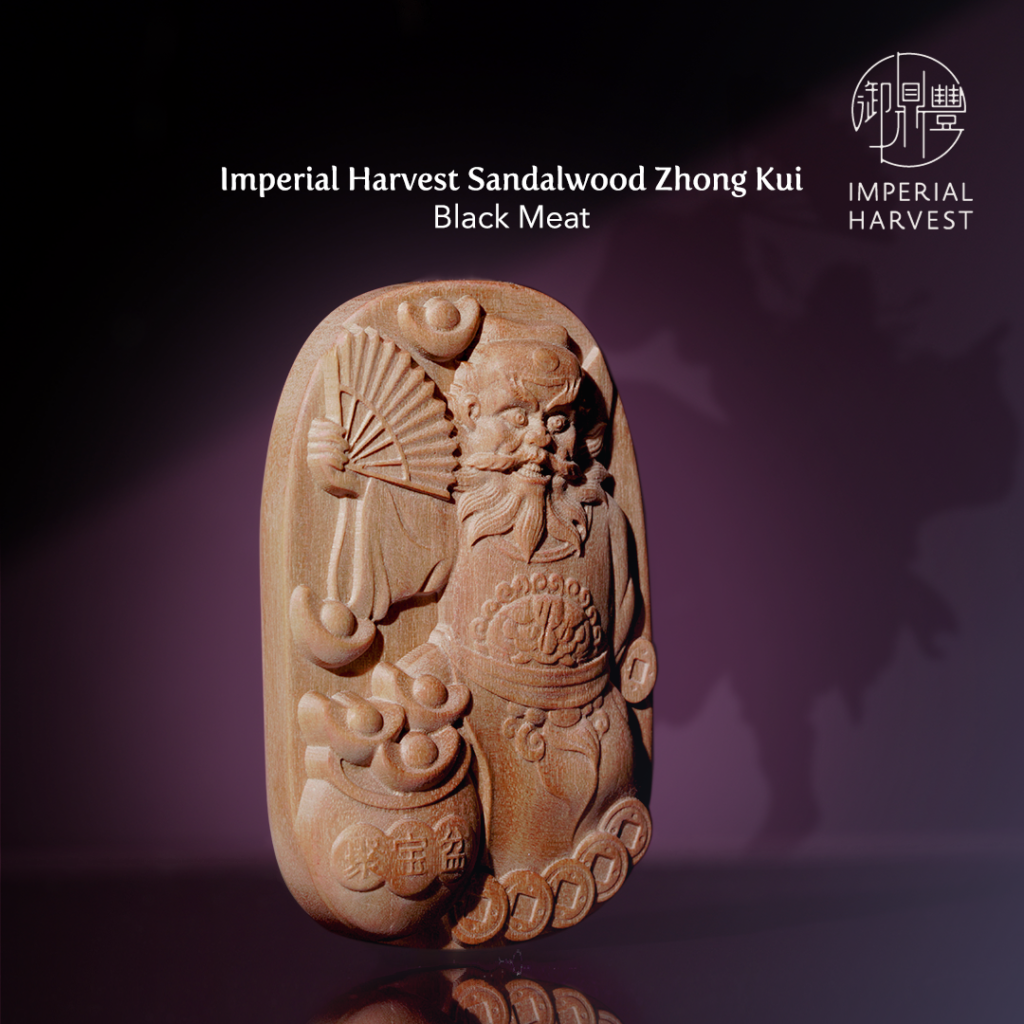 As the Windfall God of Wealth, Zhong Kui guides individuals to achieve their goals and monumental breakthroughs in their finances. A highly influential deity in Chinese culture, he removes the malefactors and obstacles hindering progression and creates valuable opportunities for his devotees in their journeys towards success.

The arrival of the seventh lunar month ushers in great opportunities for enhancing indirect wealth capacity. During this season of indirect wealth, achieve great breakthroughs and realise your goals with Imperial Harvest.