Posted by Imperial Harvest on 14 October 2022

Guan Yin, or Avalokitesvara, refers to the Goddess of Mercy — one of the most iconic deities within the Buddhist pantheon. Among devotees, she is feted for her unyielding compassion and devotion to the well-being of her faithful followers. The legend of this benevolent deity spreads far and wide, extending far beyond the temple gates. In wider society, Guan Yin’s pervasive influence is observed in popular folklore that transcends generational boundaries, taking the form of popular films, books and oratory legend. 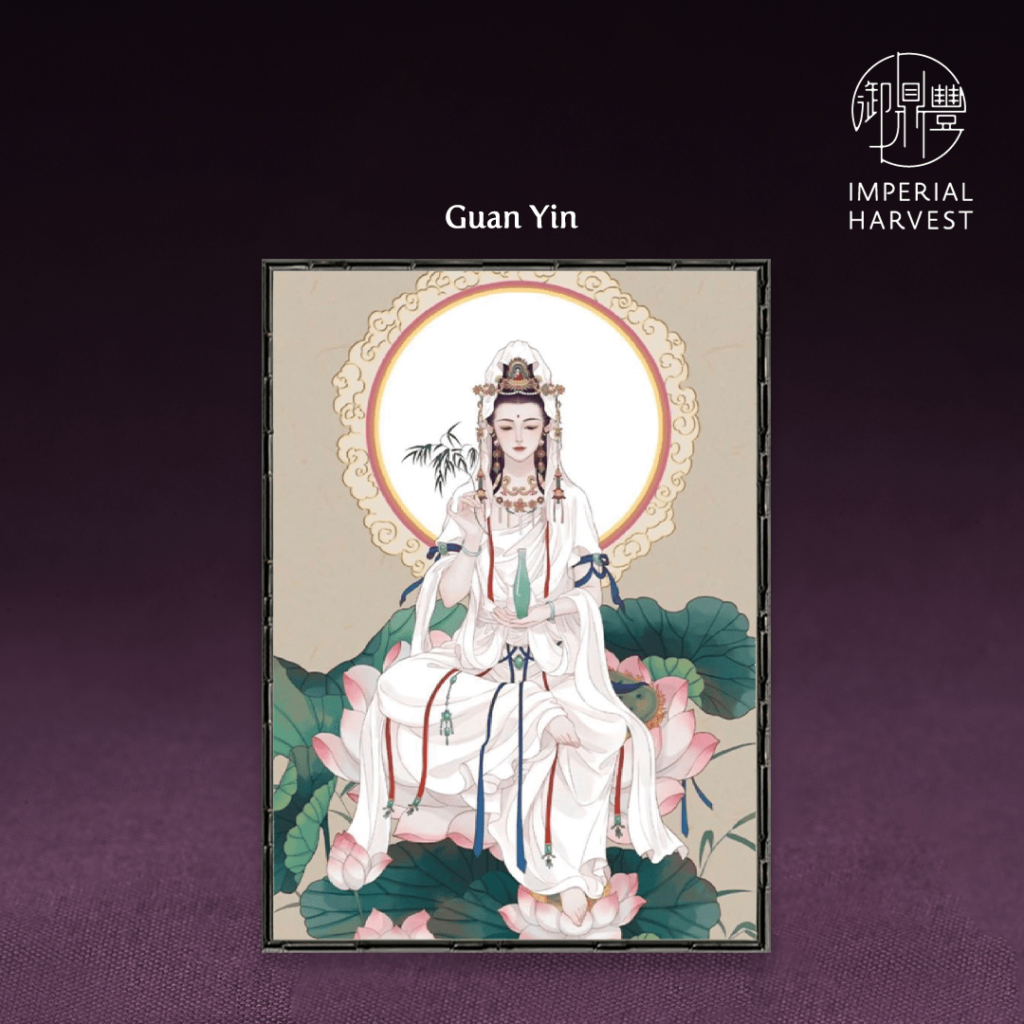 Given Guan Yin’s universal adoration, it comes as no surprise that events such as her birthday are eagerly anticipated occasions. In fact, no less than three distinct birthdays are commemorated each year, each celebrating a unique milestone in her exalted life.

Furthermore, Guan Yin’s supreme importance is observed in the sheer variety of manifestations in which she appears. No less than 33 manifestations are widely acknowledged among Buddhists across the world, one of which is the Cundi Guan Yin (準提观音).

While this manifestation is generally not as prominent in mainstream Singaporean society, it is central to the doctrines espoused by certain branches of Buddhism. In particular, the Cundi Guan Yin is of profound importance to the Kwan Im Thong Hood Cho Temple (KITHC) — one of the principal pioneers of Singapore’s Buddhist community.

The temple is truly a venerable relic for devotees across Singapore, bestowing 138 years’ worth of blessings since its establishment in 1884. Notwithstanding its fundamental religious significance, KITHC has also forged a reputation as a cultural institution in the broader society, with diverse interests in philanthropy, academia and the holistic enrichment of budding young leaders.

With its multi-faceted appeal, KITHC has for decades been the embodiment of Buddhism in Singapore. Today, its distinctive 19th-century temple architecture — characterised by bright red pillars, tiled roof and ornate auspicious motifs — draw curious onlookers and cultural enthusiasts from all walks of life. The temple features on many tourists’ must-visit lists, and is especially bustling during the Chinese New Year period when devotees seek to begin the year with the divine blessings of Guan Yin.

Taking centre stage in KITHC is a stately image of the Cundi Guan Yin – the undisputed protagonist in the temple’s central creed. Towering over the compound of this celebrated institution, this iteration of Cundi Guan Yin is indeed, imposing and inspiring in equal measure, striking awe and acclaim into the hearts of all.

Guan Yin’s eminence transcends that of the Buddhist ideology, permeating the spatial and temporal underpinnings of ancient arts such as Imperial Feng Shui. As an artisanal gemstone maison rooted in this great tradition, Imperial Harvest holds Guan Yin, in all of her manifestations and glory, in great regard.

In line with Imperial Harvest’s commitment to utilising only the finest sandalwood, only mature trees at least 80 years of age are logged. Three distinct sandalwood varieties — Yellow, Red and Black Meat — cater to the diversity in Imperial Feng Shui preferences and requirements of Imperial Harvest blessed clients.

Designed in Singapore, this collection was produced in limited quantities, with only 18 pieces available. 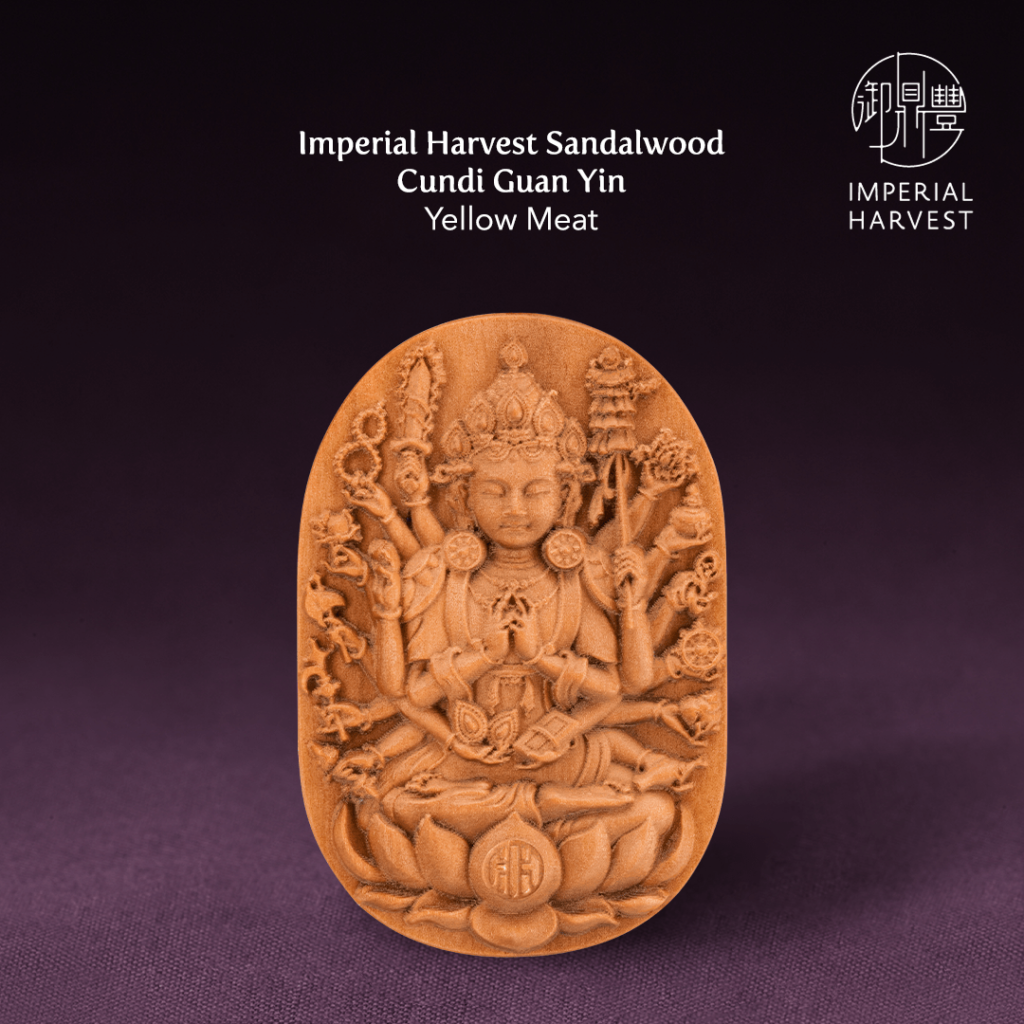 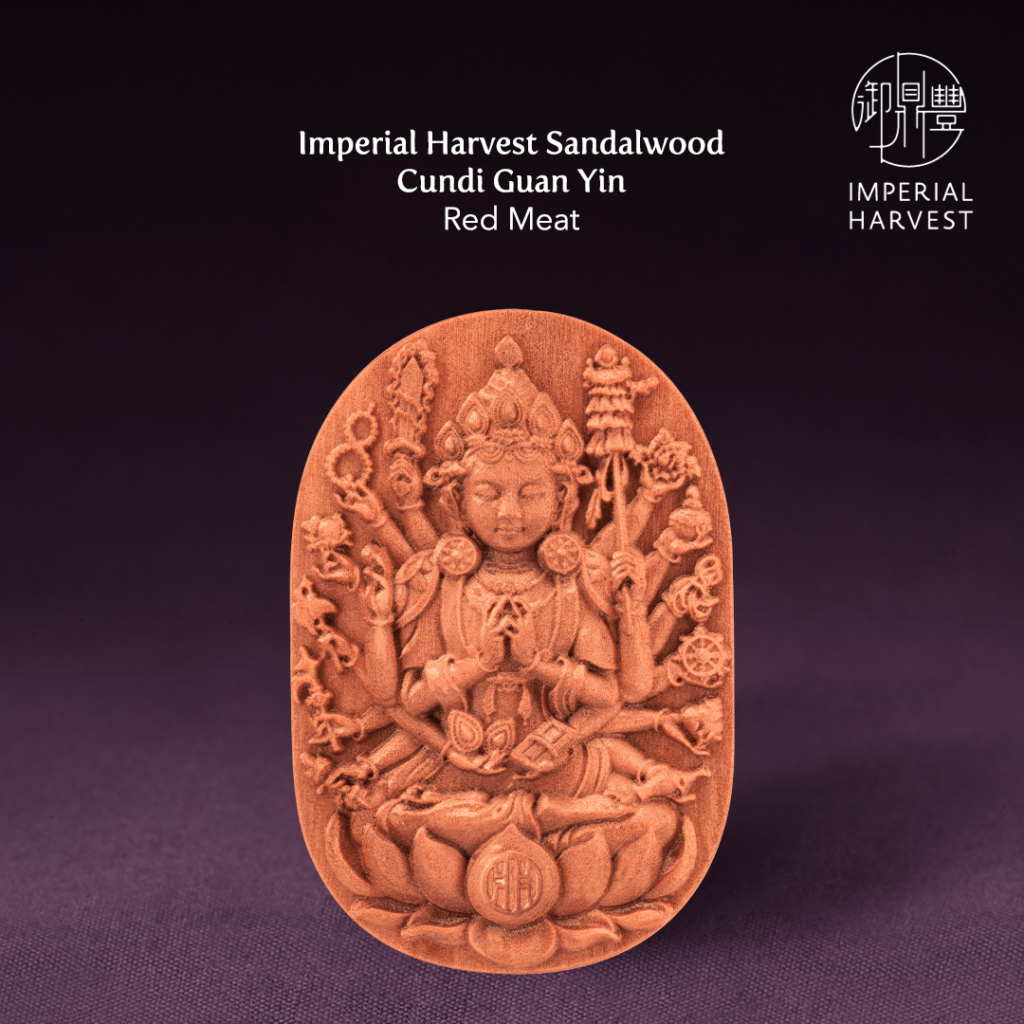 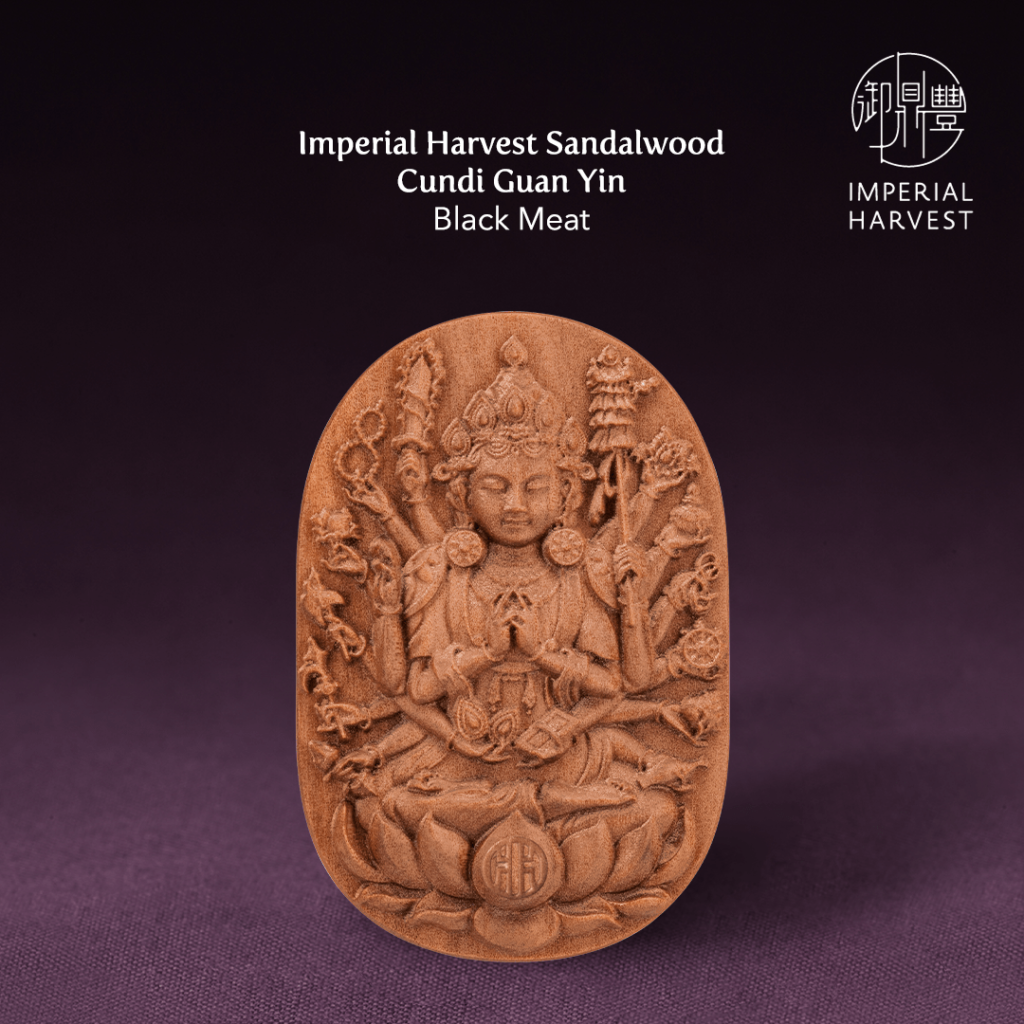 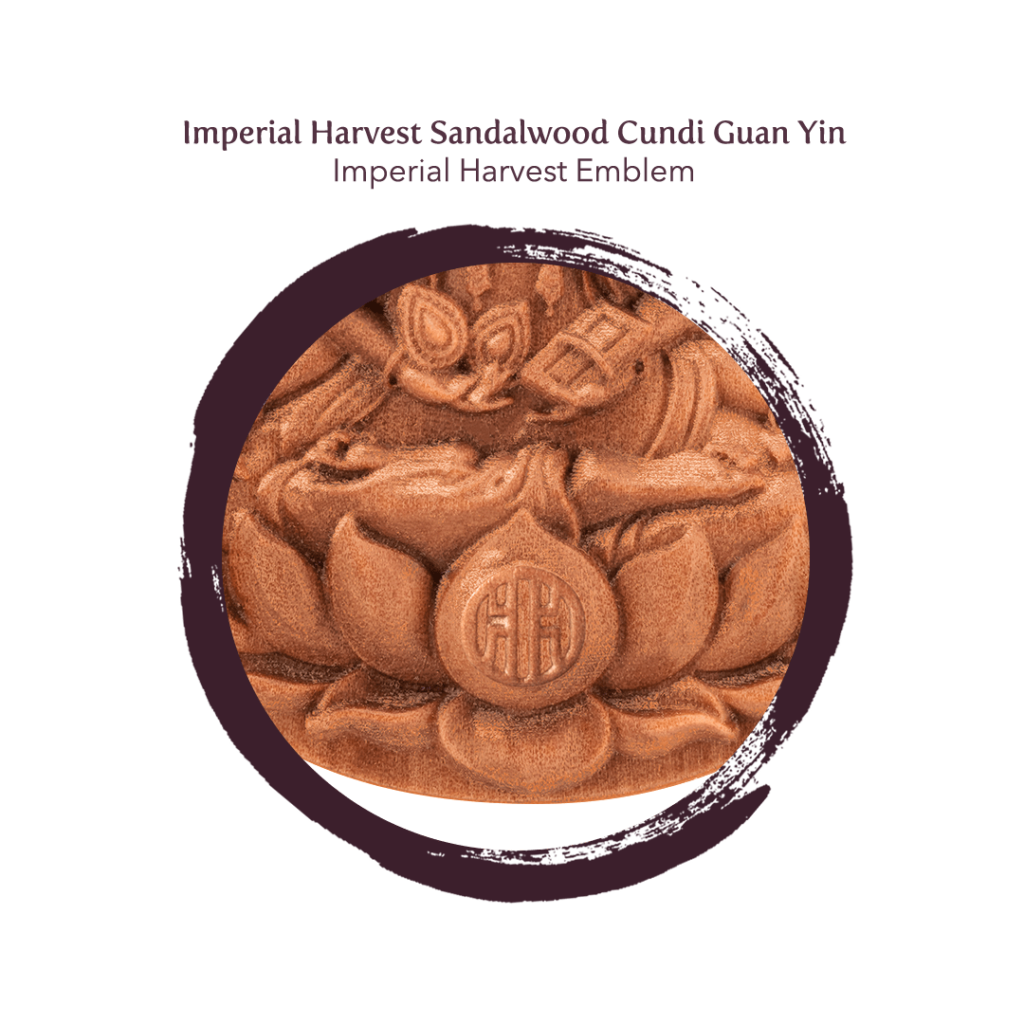 Through extensive inquiry into the legend of the Cundi Guan Yin, Master David unveils the inspired conception of the Imperial Harvest Cundi Guan Yin Sandalwood Pendant. Each element is meticulously conceptualised, sketched and refined, in line with the blessings conveyed by the Cundi Guan Yin and her suite of auspicious accoutrements. The handiwork is then brought to life by the superlative craftsmanship of Imperial Harvest artisans, who cut and carve according to Master David’s inspired vision.

Seated in the archetypal lotus position, the Imperial Harvest Cundi Guan Yin is instantly recognisable as the epitome of benevolence. The foremost of her nine pairs of arms forms the Muladhara mudra — one of the most widely employed of all mudras. Drawn from Sanskrit for “foundation”, the Muladhara keeps individuals grounded and stable by balancing the root, or foremost, chakra. 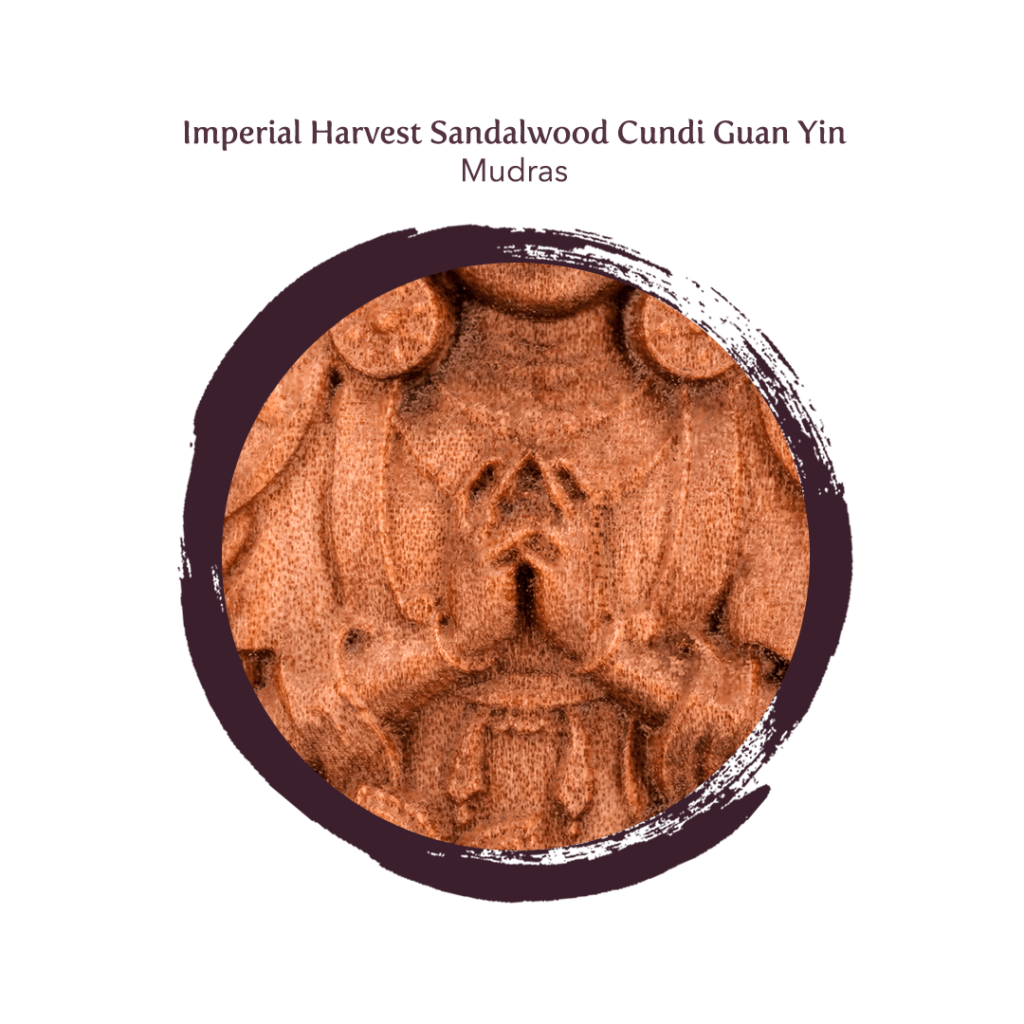 The other mudra incorporated into the Imperial Harvest Cundi Guan Yin Sandalwood pendant is the Abhaya mudra — the gesture of a fearless heart. The outward-facing right palm is kept aloft, symbolising the deflection of all manner of nefarious spirits. In repelling their malicious intentions, Guan Yin bestows upon destined owners divine protection, ensconcing them within her comforting cradle of righteousness. 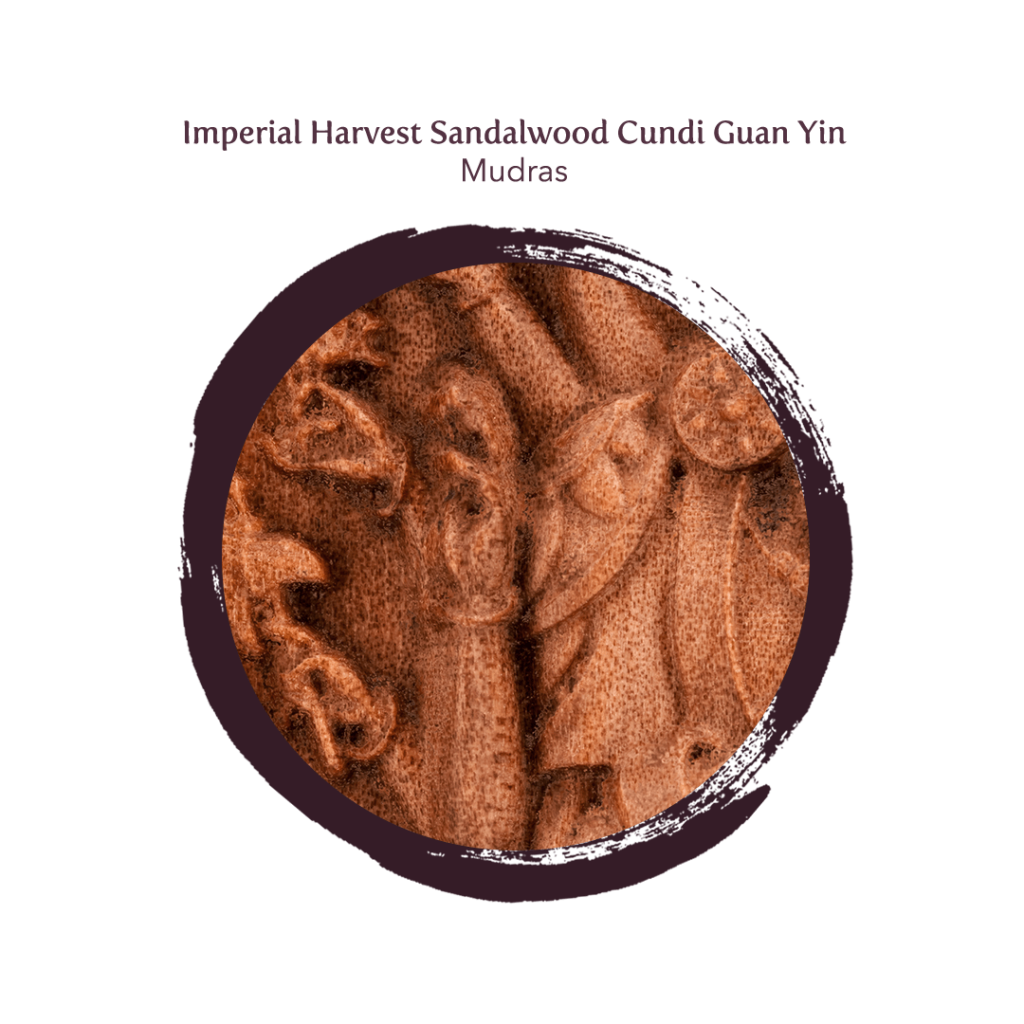 In keeping with Guan Yin’s altruism, Master David inscribes upon the Imperial Harvest Cundi Guan Yin Sandalwood pendant an array of tools and treasures that not only safeguard the wearer against affliction, but also confer auspicious energies upon their household and endeavours.

Wish-fulfilling Pennant: One of the most potent tools in Guan Yin’s arsenal, the Wish-fulfilling Pennant functions as a highly-visible emblem of all that Guan Yin stands for; compassion, wisdom and power. It represents the immutability of her legend and legacy — enduring through the generations. 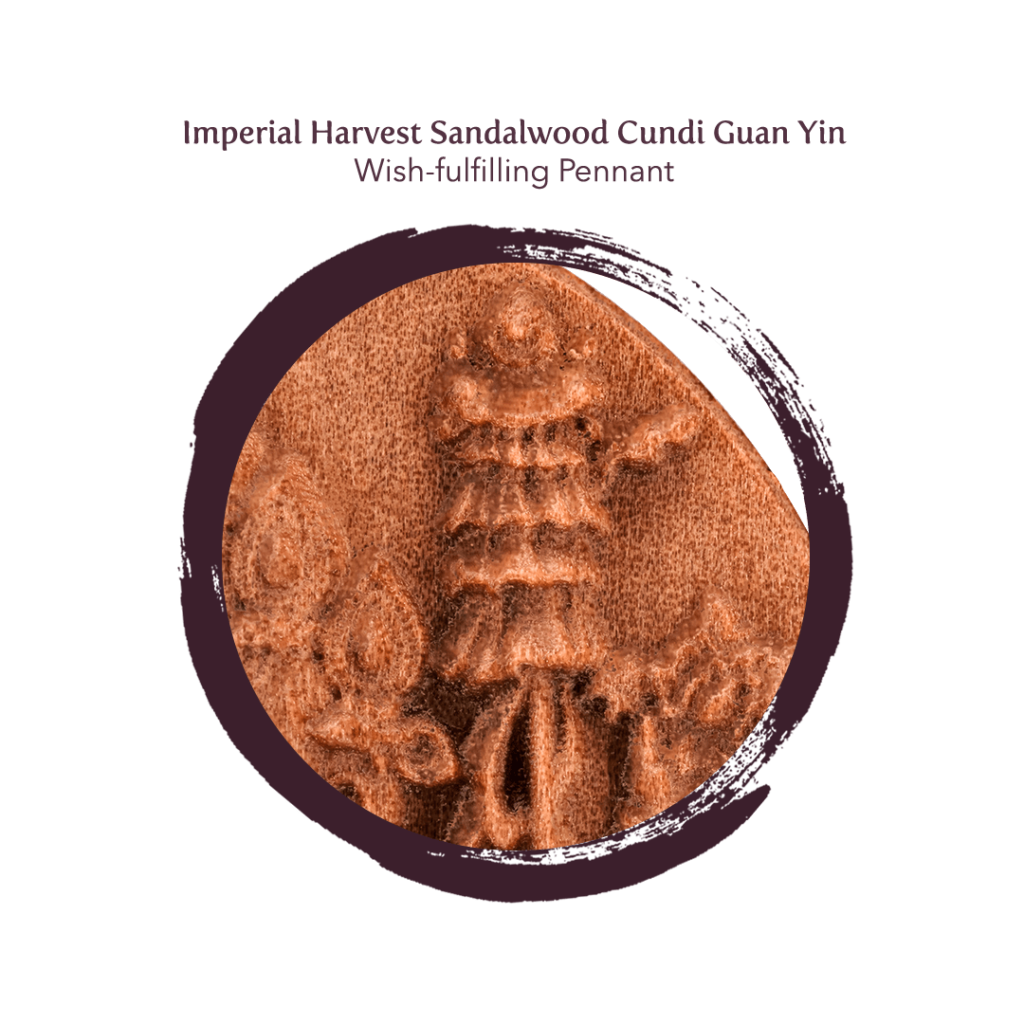 Lotus: Complementing the giant lotus pad upon which Guan Yin rests, the lotus flower in Guan Yin’s hand represents the purifying power of this versatile plant. From its roots to its seeds, the lotus is incorporated into a variety of foods and commodities — a testament to the extensive reception of its restorative properties. 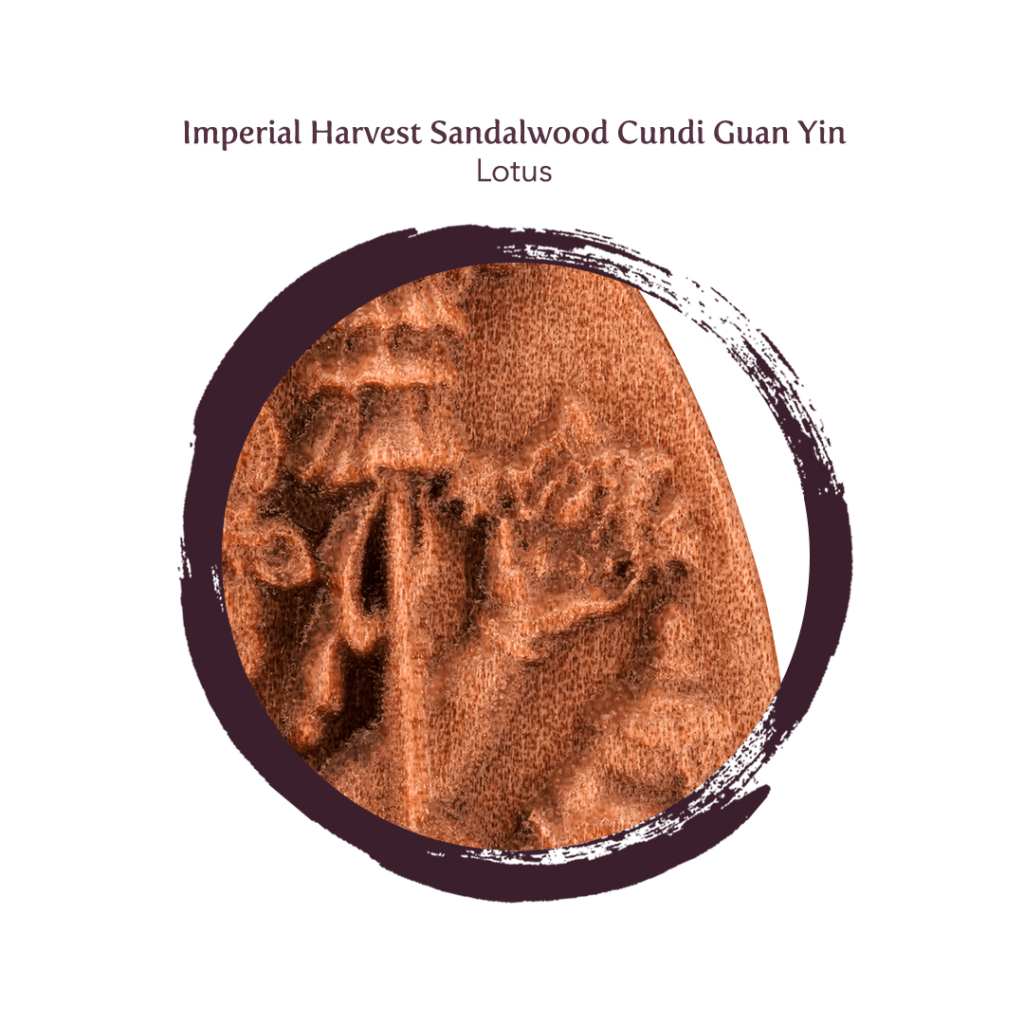 Bathing Vase: The vase contains the proverbial river of life from which the essence of being springs forth. Spouting from Guan Yin herself, the contents of the vase signify the cleansing and nurturing of all sentient beings in their embracement of Guan Yin’s blessings. 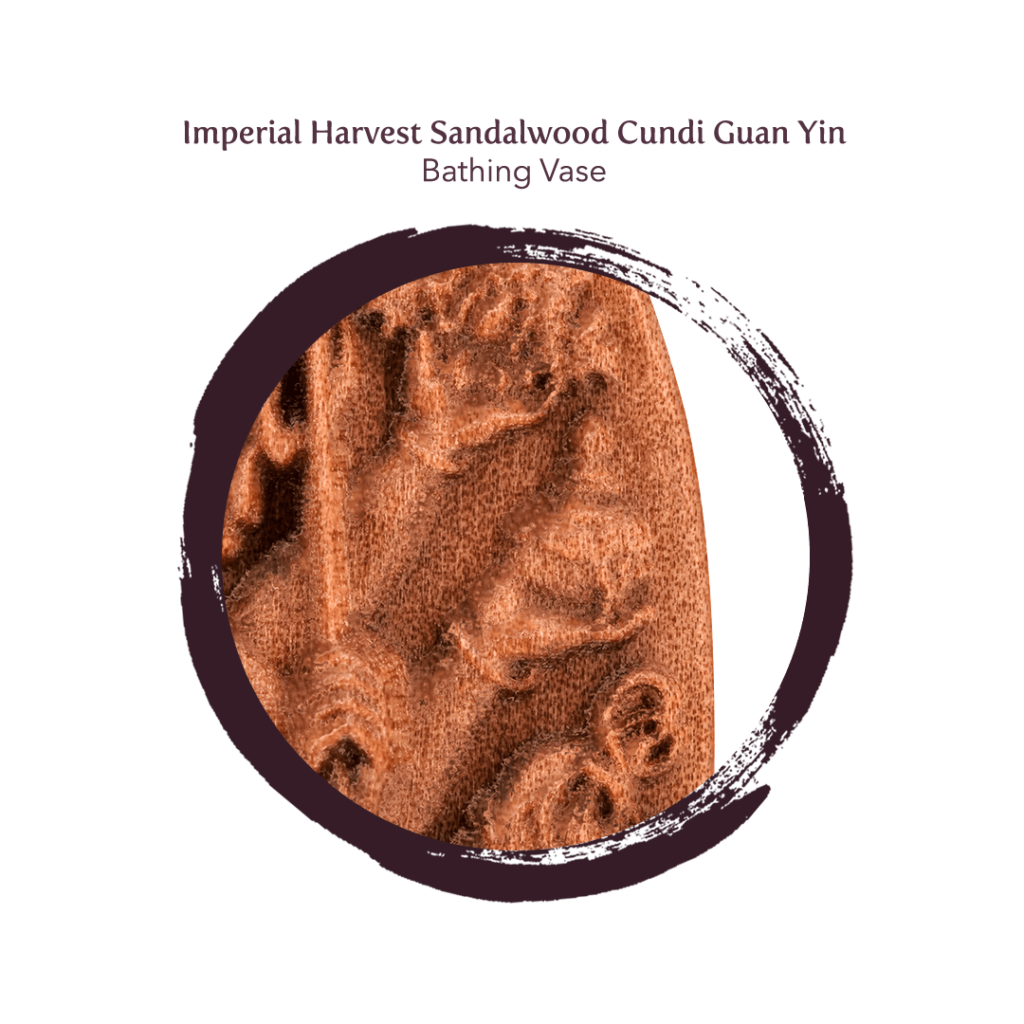 Vajra Lasso: Originating from Hindu influences, the Vajra today is commonly conceived as an all-powerful ritualistic weapon, wielded not only against malevolent spirits and forces, but also figuratively against the throes of suffering and ignorance. Fashioned from brass or bronze, it is thought to be indestructible, making it an enduring motif of Vajrayana Buddhism in particular. 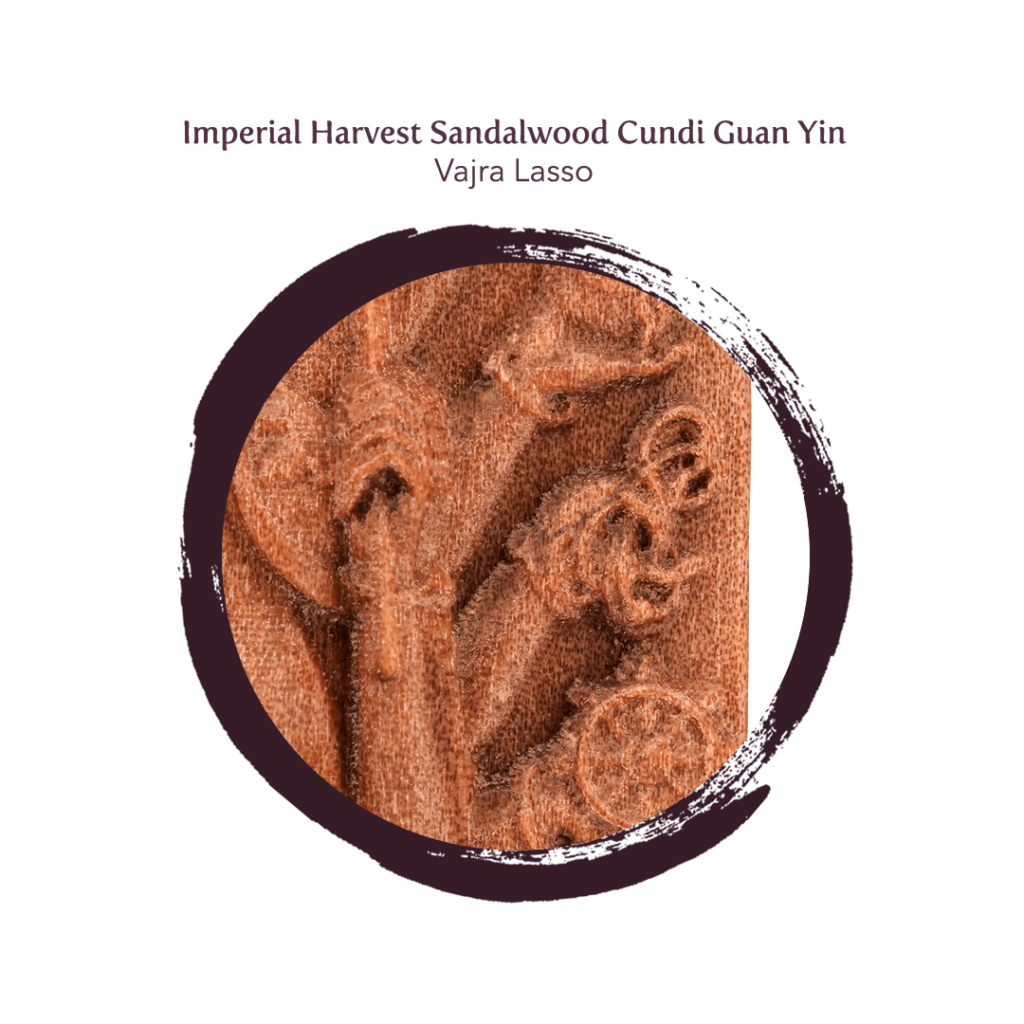 Eight-spoked Wheel: Also known as the wheel of dharma, it is widely synonymous with the Buddhist tradition. Its very roundness suggests the completeness, or perfection, of the Buddhist ideology. Scaffolding its practice is the rim. It points to how the active or mindful application of these teachings upholds Buddhism, just as the rim of a wheel maintains its integrity. 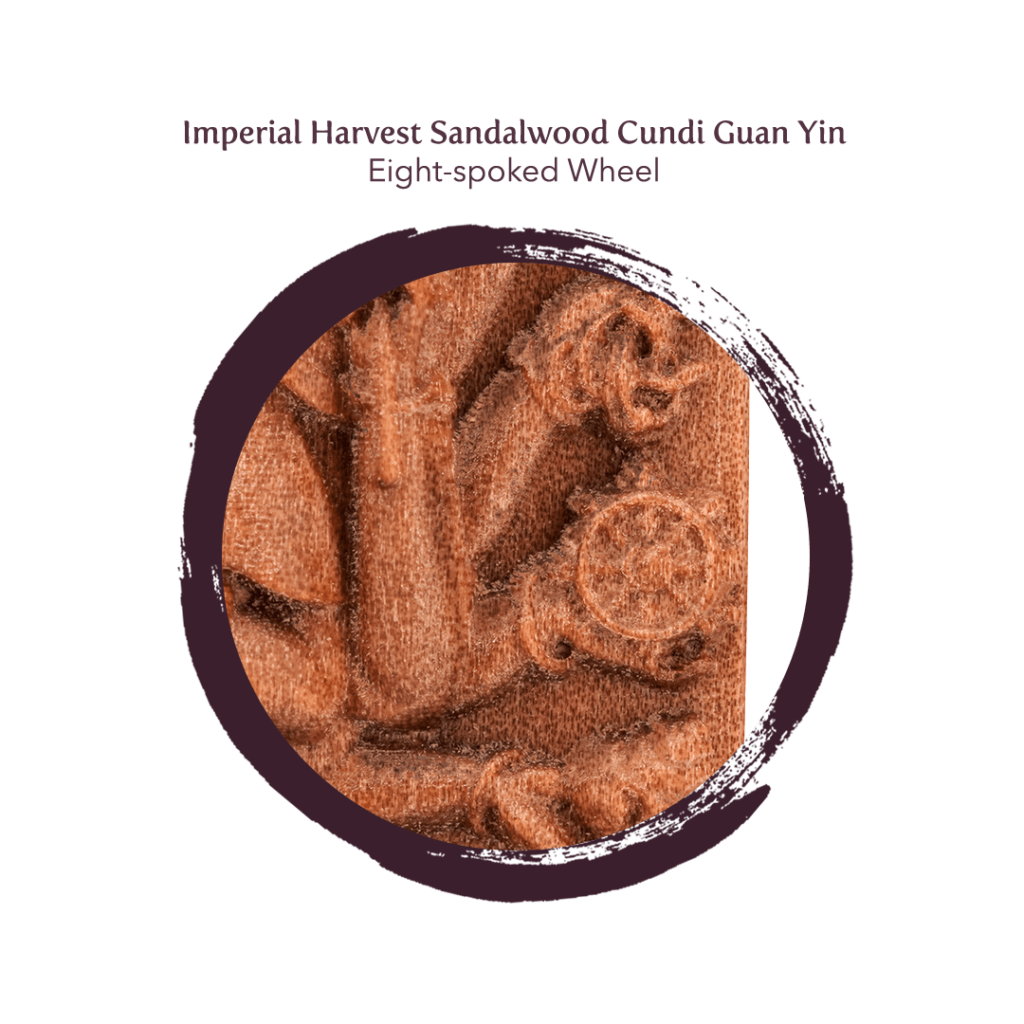 Conch: The structure of a conch is amenable to strong and lasting reverberations. Grasped firmly in Guan Yin’s hand, it signifies the enduring promulgation of dharma, or Buddhist teachings, with the intensity of their espousal echoing ever more strongly. 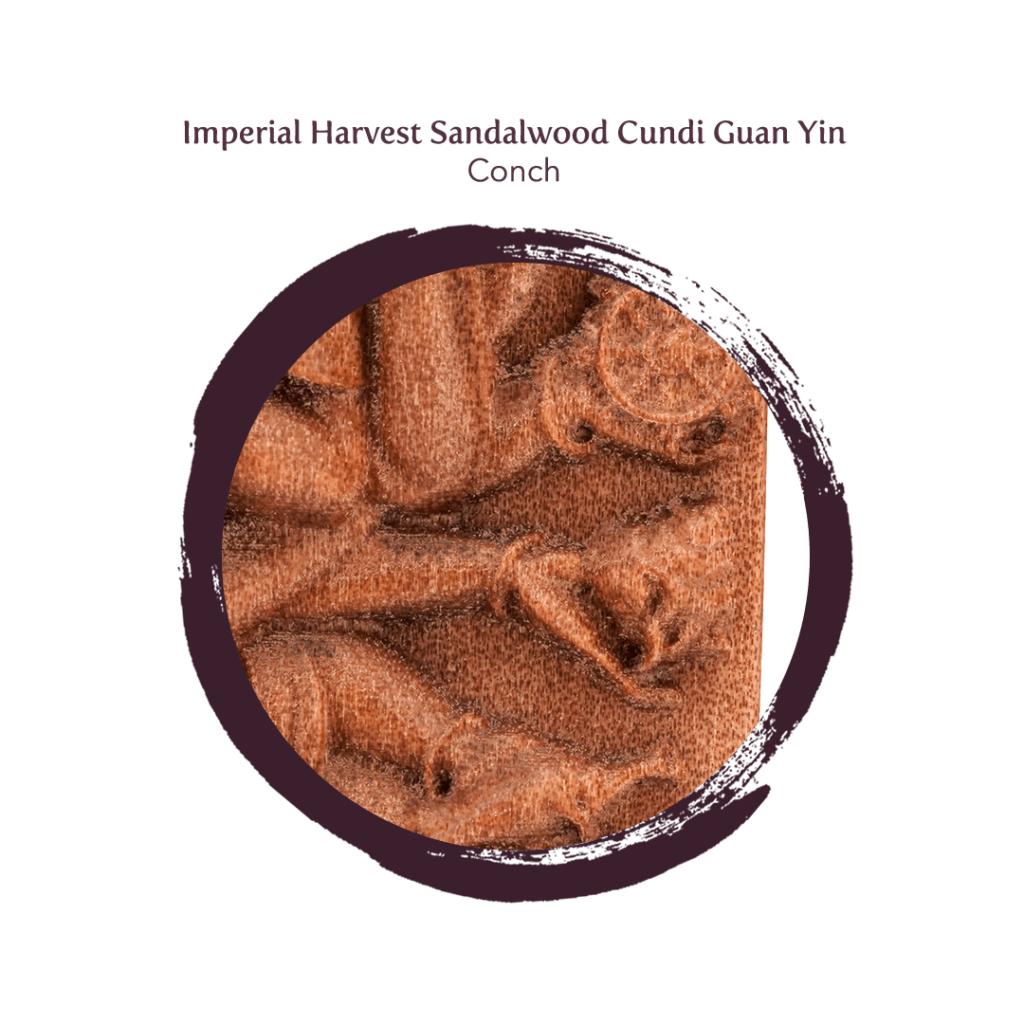 Precious Vase: Akin to how decorative vases, along with their contents, occupy conspicuous spaces to garner admiration, Guan Yin’s vase embodies the growing prominence of dharma in the global consciousness. 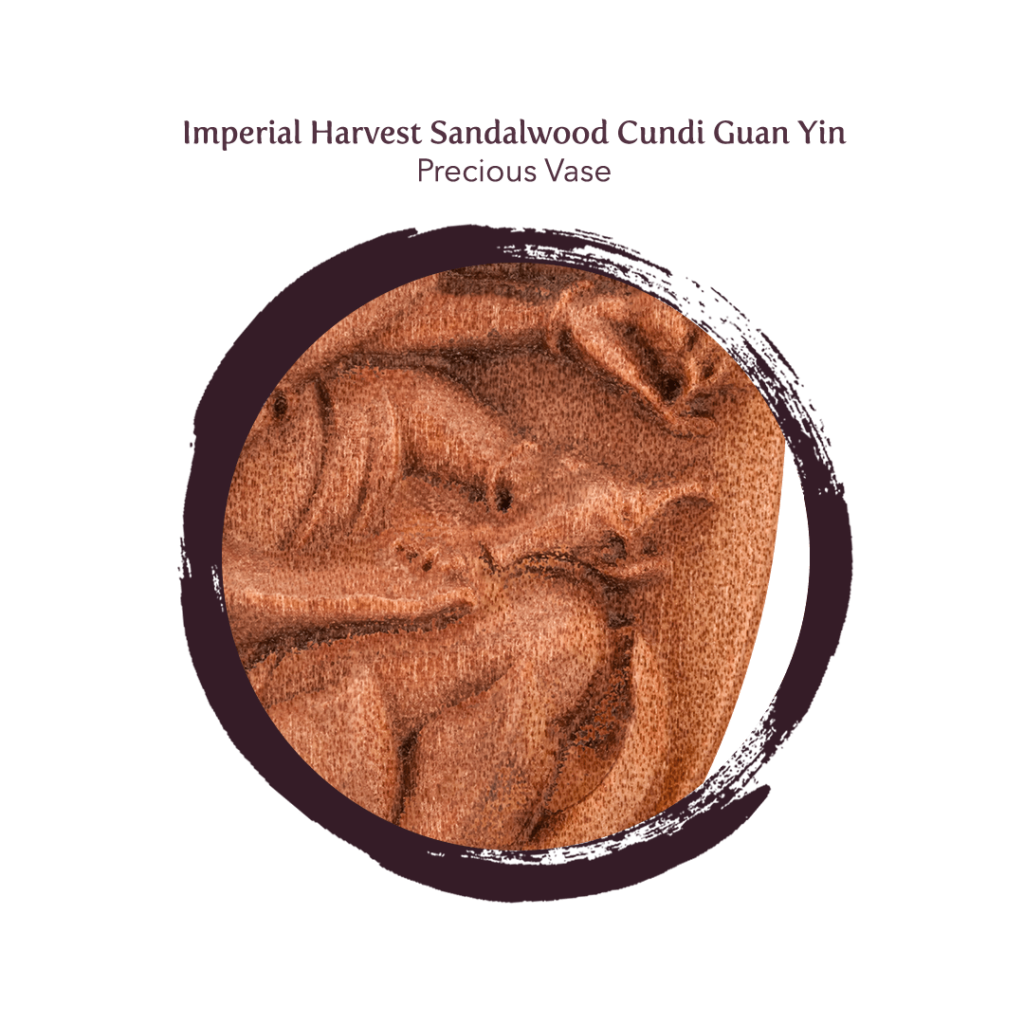 Wisdom Sutra: The sutras of ancient religions — including Hinduism and Buddhism — are the very epitome of wisdom. Meticulously generated through sheer scholarly intellect, they embody the finest of ancient religious academics. In Guan Yin’s hand, they convey the erudition and effectiveness of her approach to the alleviation of mankind’s suffering. 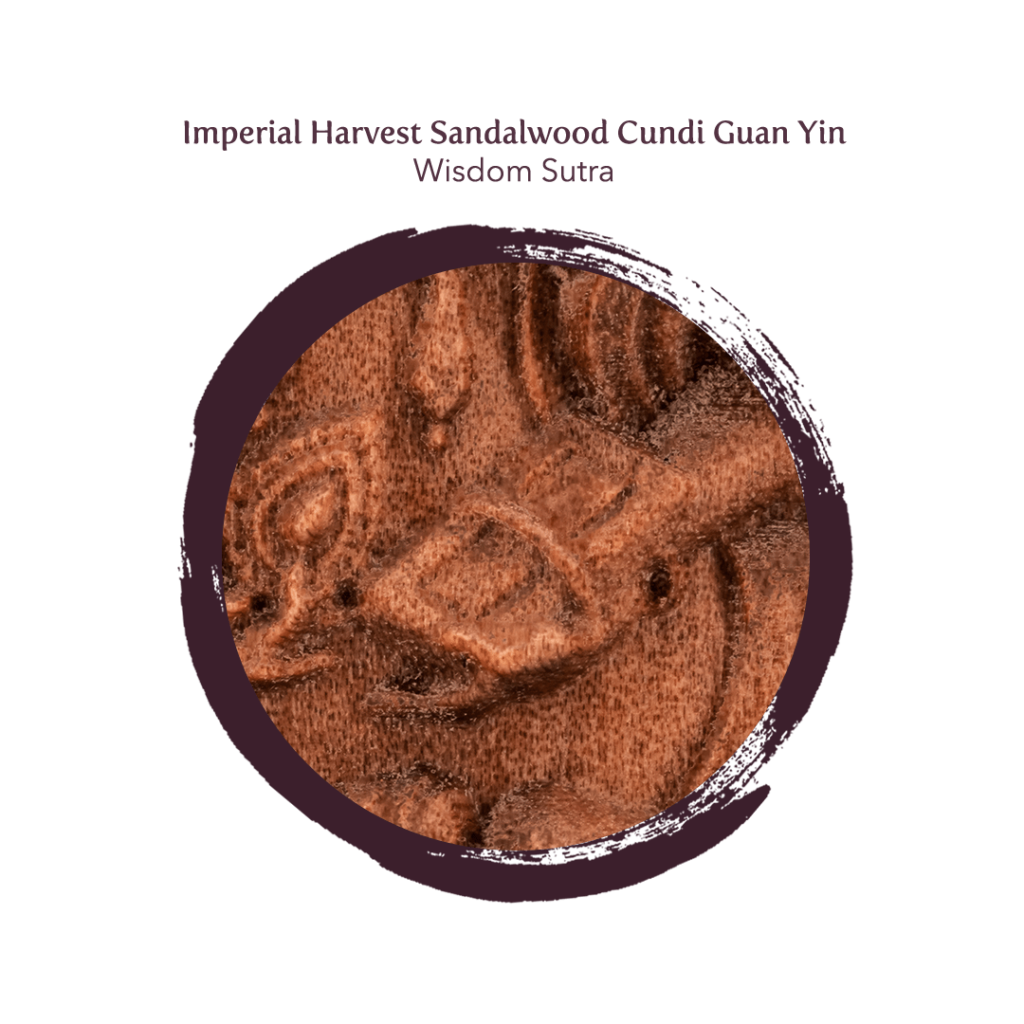 Headdress: The inclusion of this amply bejewelled headdress reflects Guan Yin’s commitment to the emancipation of humankind from all suffering – and the consequent gleaming future of all sentient beings. 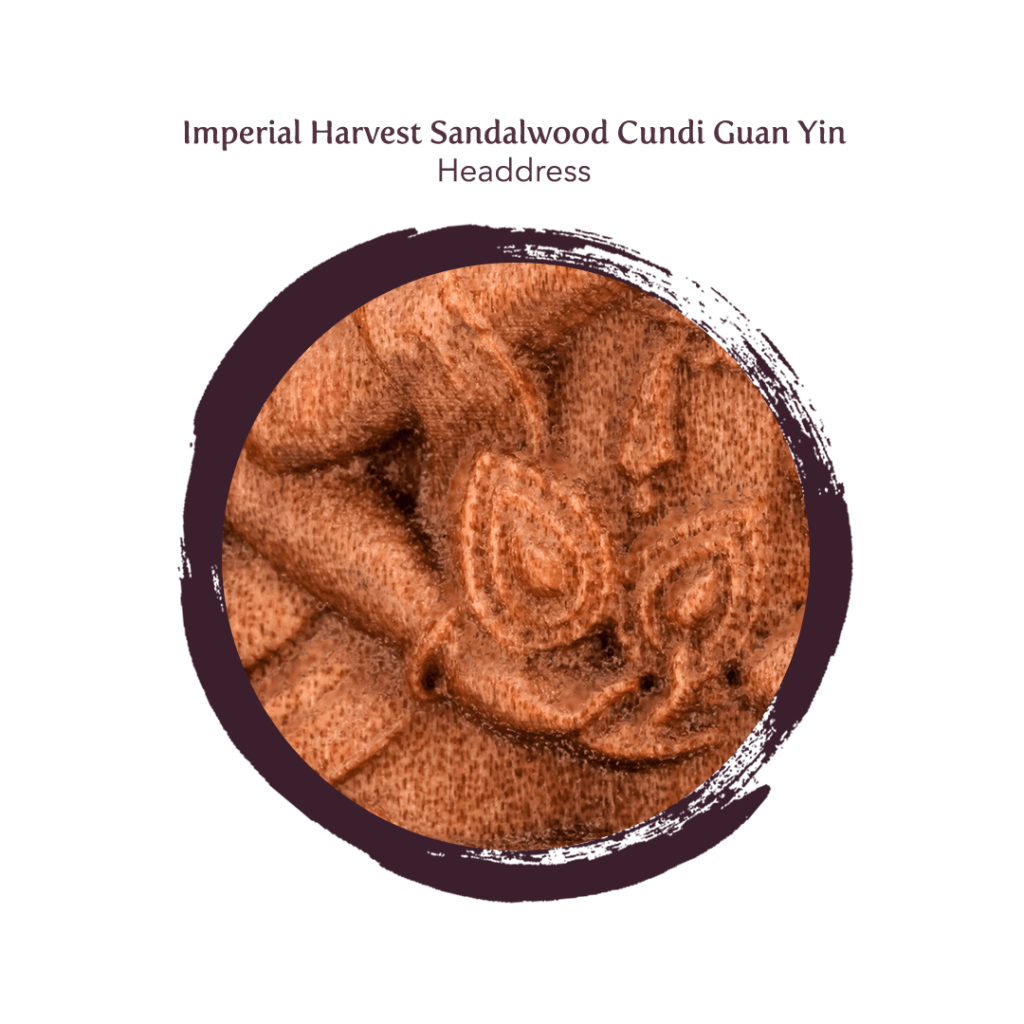 Vajra Sceptre: Much as the Vajra Lasso is brandished against objectionable elements, the Vajra sceptre represents the subjugation of ill-disposed malefactors to Guan Yin’s impregnable creed of righteousness. This weapon also converges support from the eight classes of celestial beings. 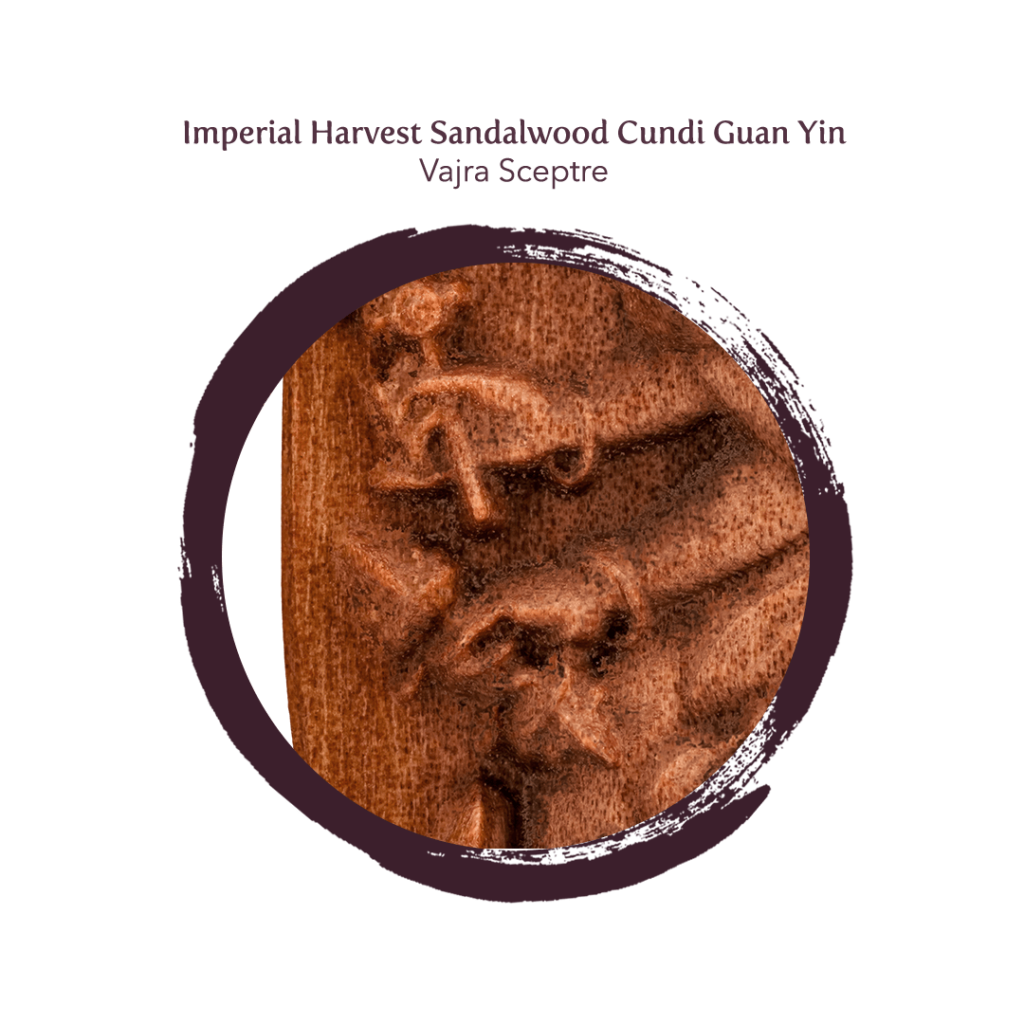 Vajra Hook: With its sharp curved prong, this knife is well-equipped for the uncompromising destruction of demonic forces. Simultaneously, the inherent contour of the hook allows it to attract and retain desirable elements for the advancement of humankind. 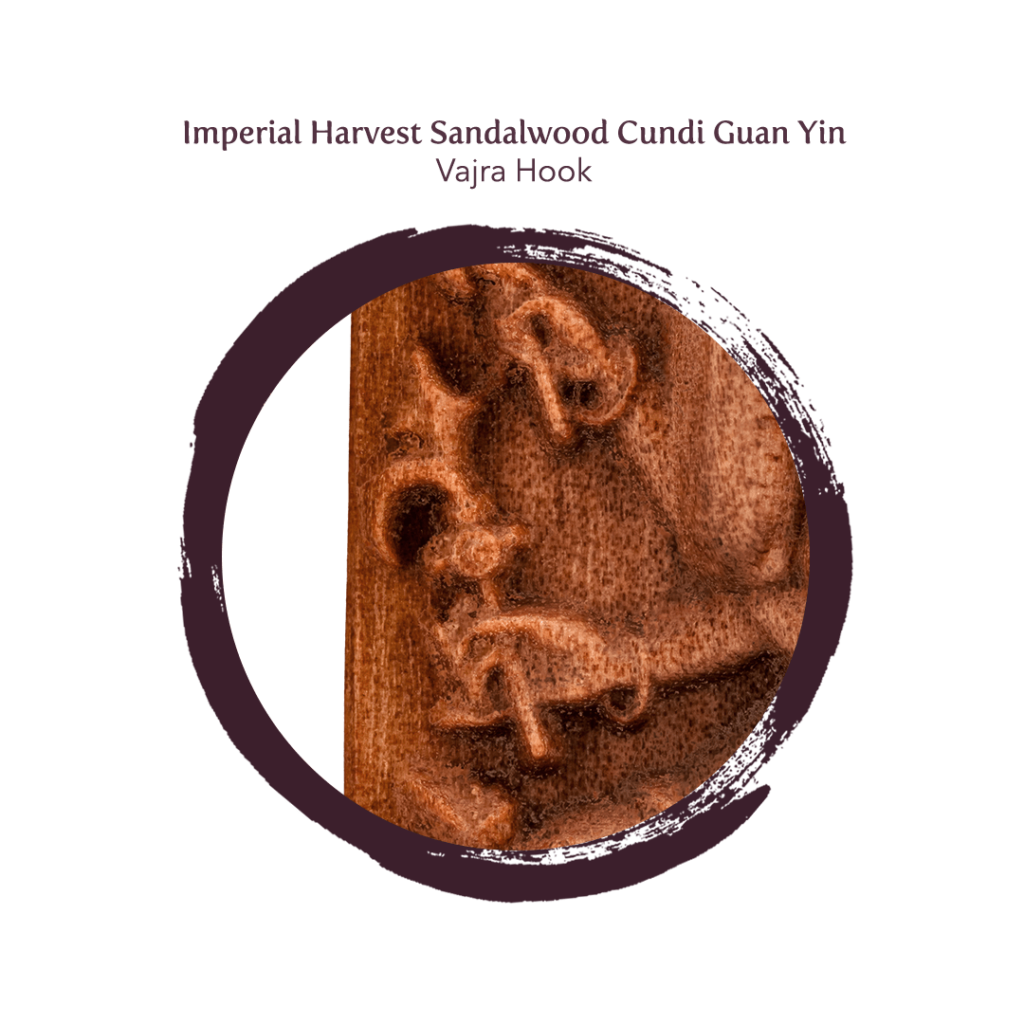 Axe: Guan Yin’s axe is simultaneously deployed against external elements, and oneself. In the former circumstances, it complements Guan Yin’s other weapons in eliminating the manifestations of evil. Used internally, it represents the denial of oneself, severing the attachment to carnal desires and ways of the world. 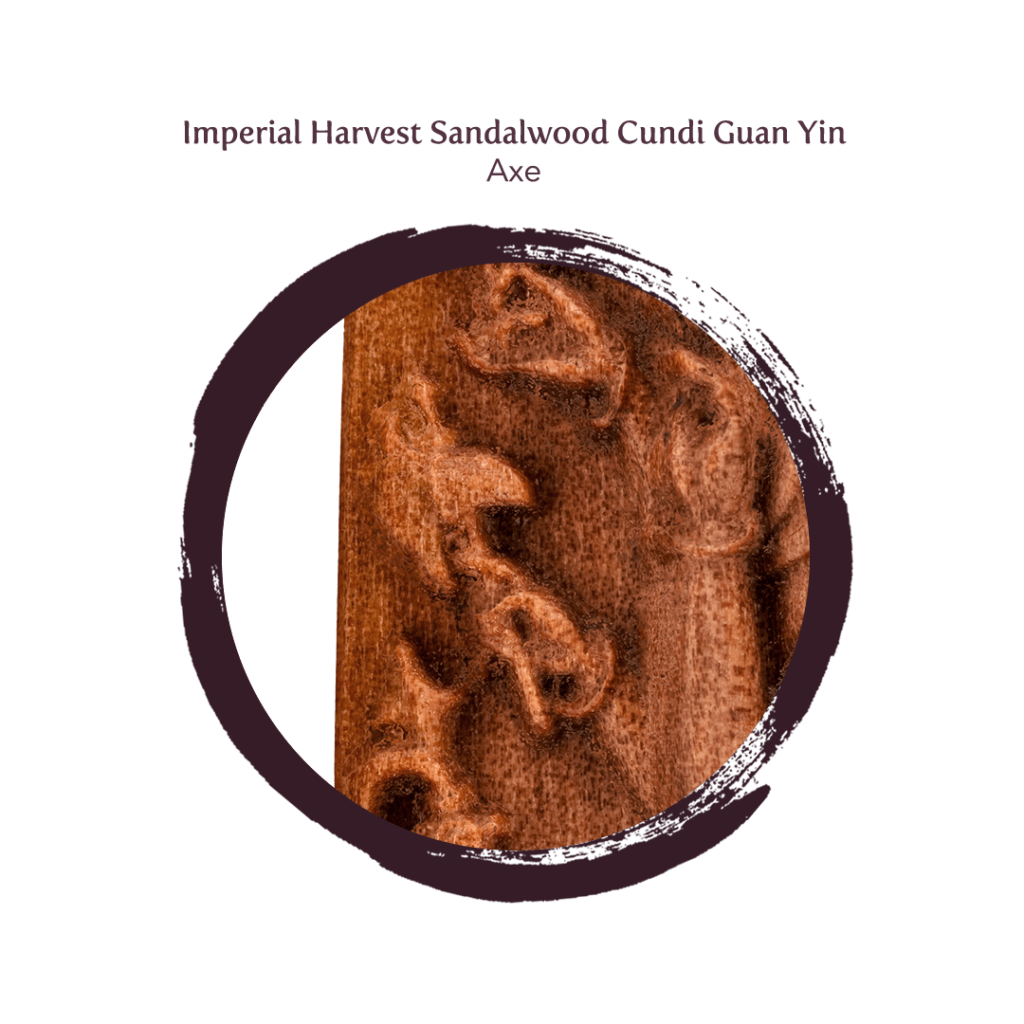 Heavenly Fruit: The sensory delight evoked by the sweetness of Guan Yin’s heavenly fruit mirrors the satisfaction derived from the pursuit — and eventual attainment — of enlightenment. Through accumulating good karma, the blessed wearer also encounters pleasures akin to the savouring of the fruit. 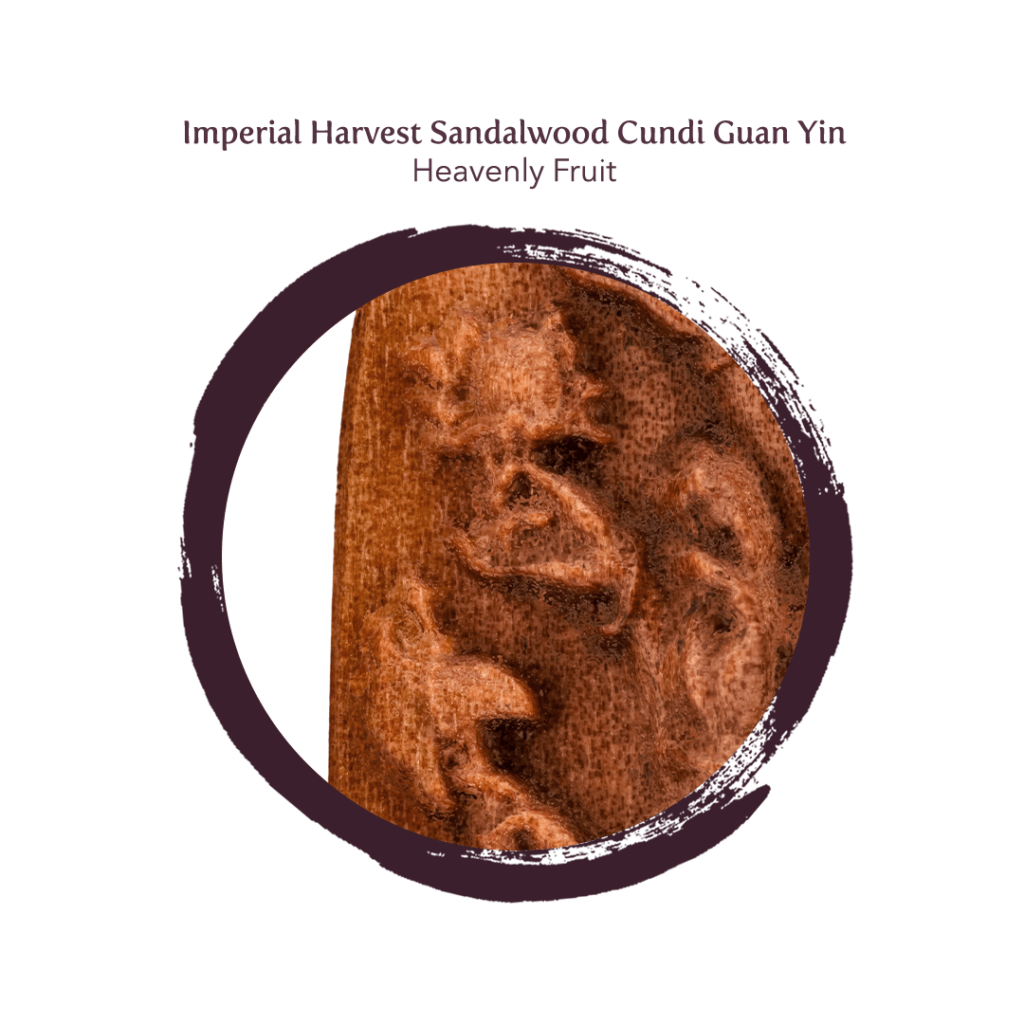 Agarwood Beads: Agarwood beads are indispensable to meditation and prayer, spurring devotees to be mindful of their thoughts and dispositions. They are often present as a bracelet of 108 beads or a factor of this number, in homage to its spiritual wholeness. As one of Guan Yin’s tools, it represents the flawless purity and keenness of the mind. 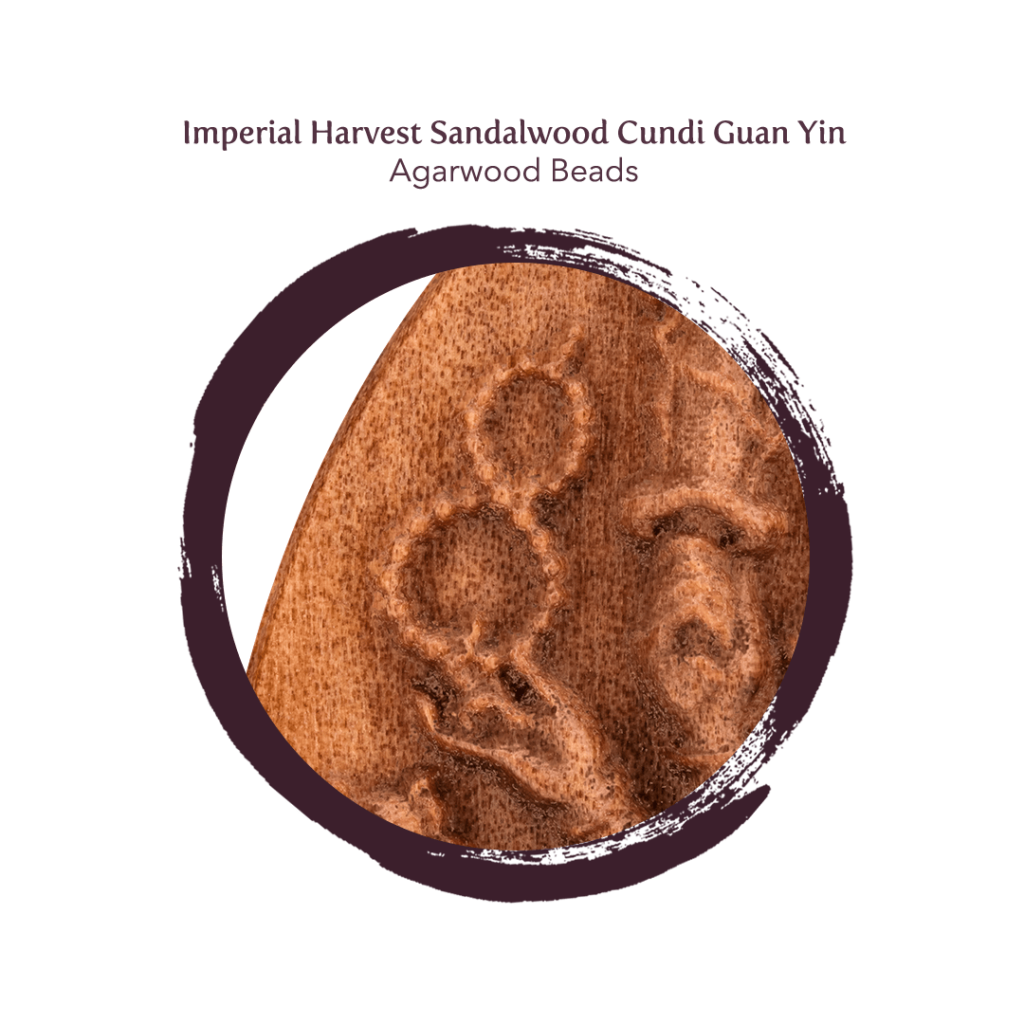 Sword of Wisdom: As its name suggests, the Sword of Wisdom is an ardent defender of intellectual pursuits, representing the tireless enrichment of the mind. It also severs the distractions of detrimental qualities such as greed, anger and apathy. 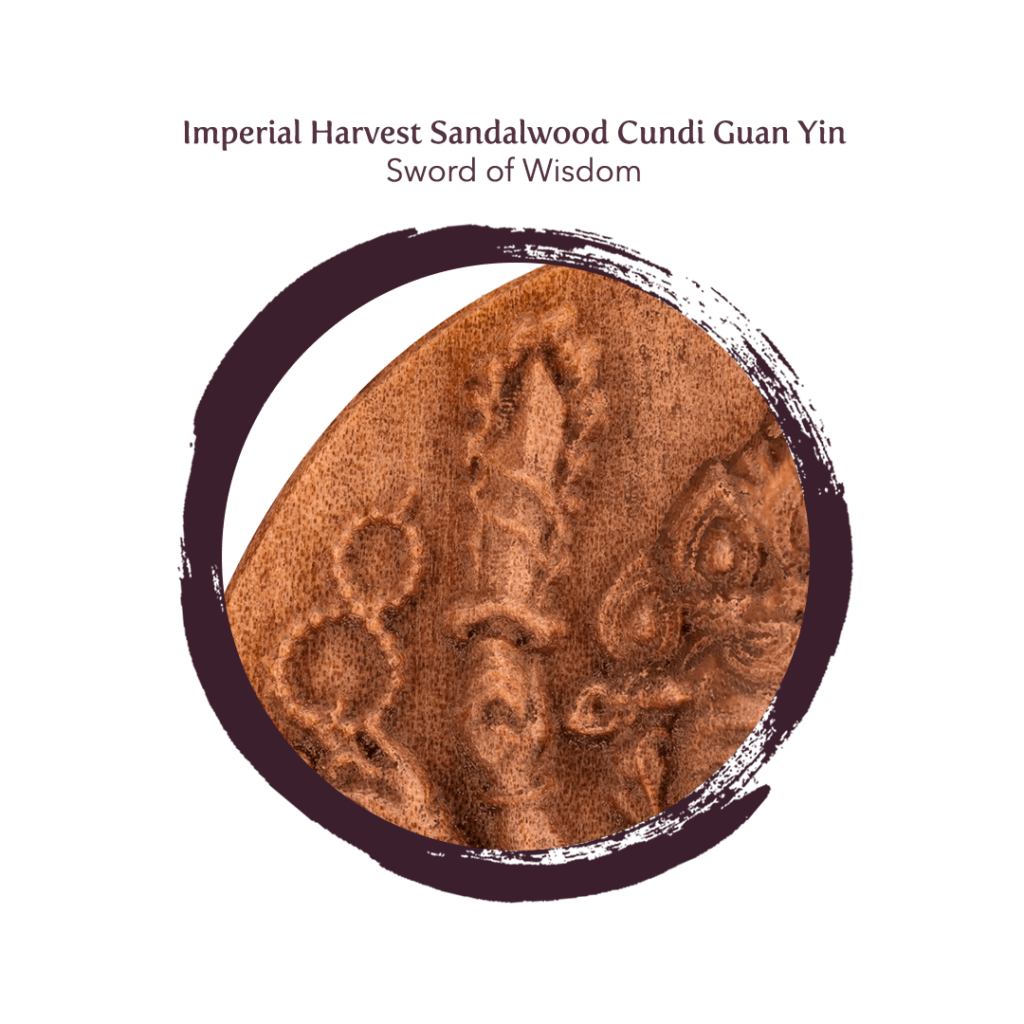 Leveraging the disparate yet complementary qualities of these diverse instruments, the Imperial Harvest Cundi Guan Yin Sandalwood pendant is a potent treasure for clients looking to embody the laudable qualities of this compassionate and omnipotent deity. Indeed, it is a culmination of Master David’s extensive research on the Buddhist tradition, in particular Guan Yin’s role in shaping its principles and practices through its historical course.

Commemorate Guan Yin’s third birthday with Imperial Harvest! Our expert consultants are always on hand to guide you on your journey, and provide you with insights to help you realise your fullest potential. Book a complimentary consultation today or contact us at +65 91221826.