Every year, Guan Yin’s second out of three annual birthdays falls on the 19th day of the 6th Lunar Month. An auspicious occasion, Guan Yin’s birthday marks her initiation onto the path of Enlightenment – a period of peace, meditation and abundance.

In East Asian tradition, Guan Yin is the female spiritual embodiment of compassion and mercy. 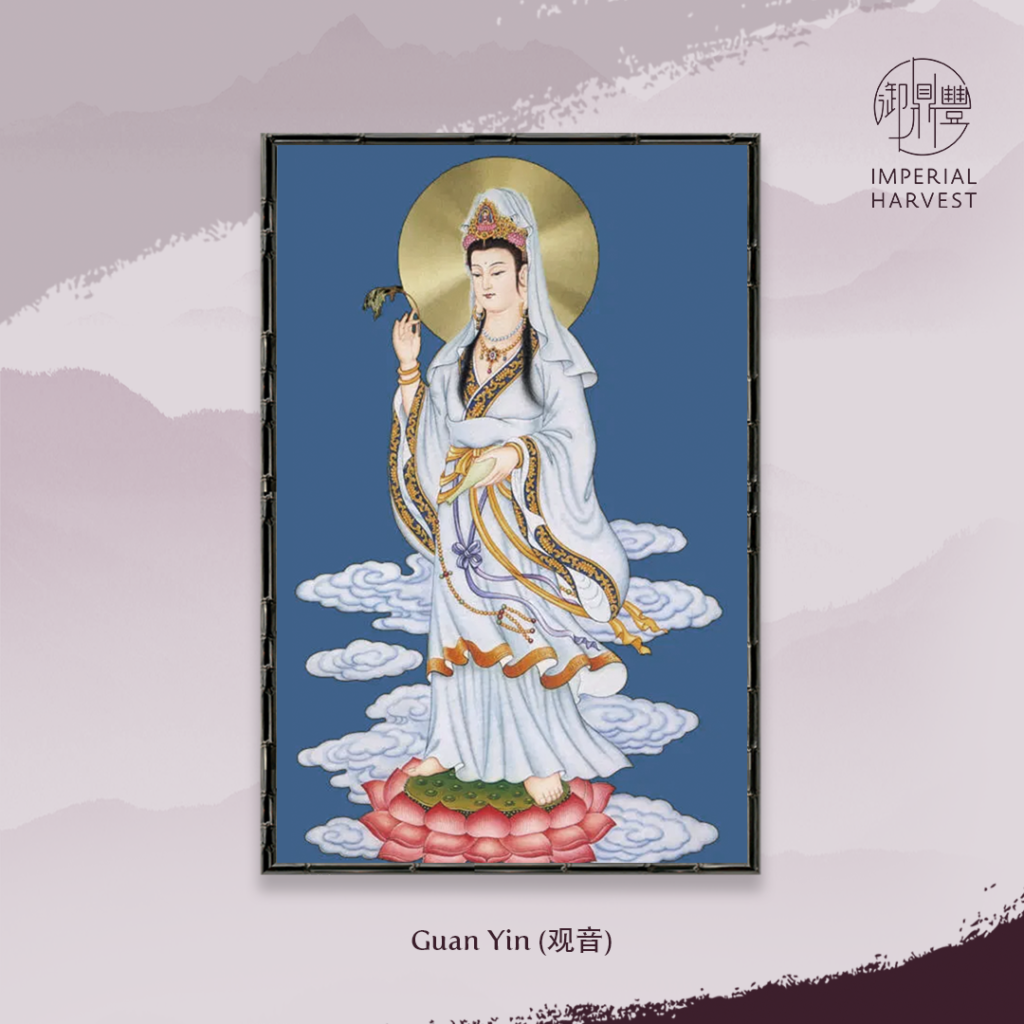 She is an all-seeing, all-hearing being who is called upon by worshipers in times of uncertainty, despair, and fear.

The 33 manifestations of Guan Yin are believed to bestow her devotees with bountiful luck and groundbreaking growth. They promote success in multiple endeavours, regardless of their nature.

For this very reason, statues of Guan Yin are frequently seen in monasteries around Asia – the most well-known one is located at Nanshan, Sanya, in China’s Hainan region. 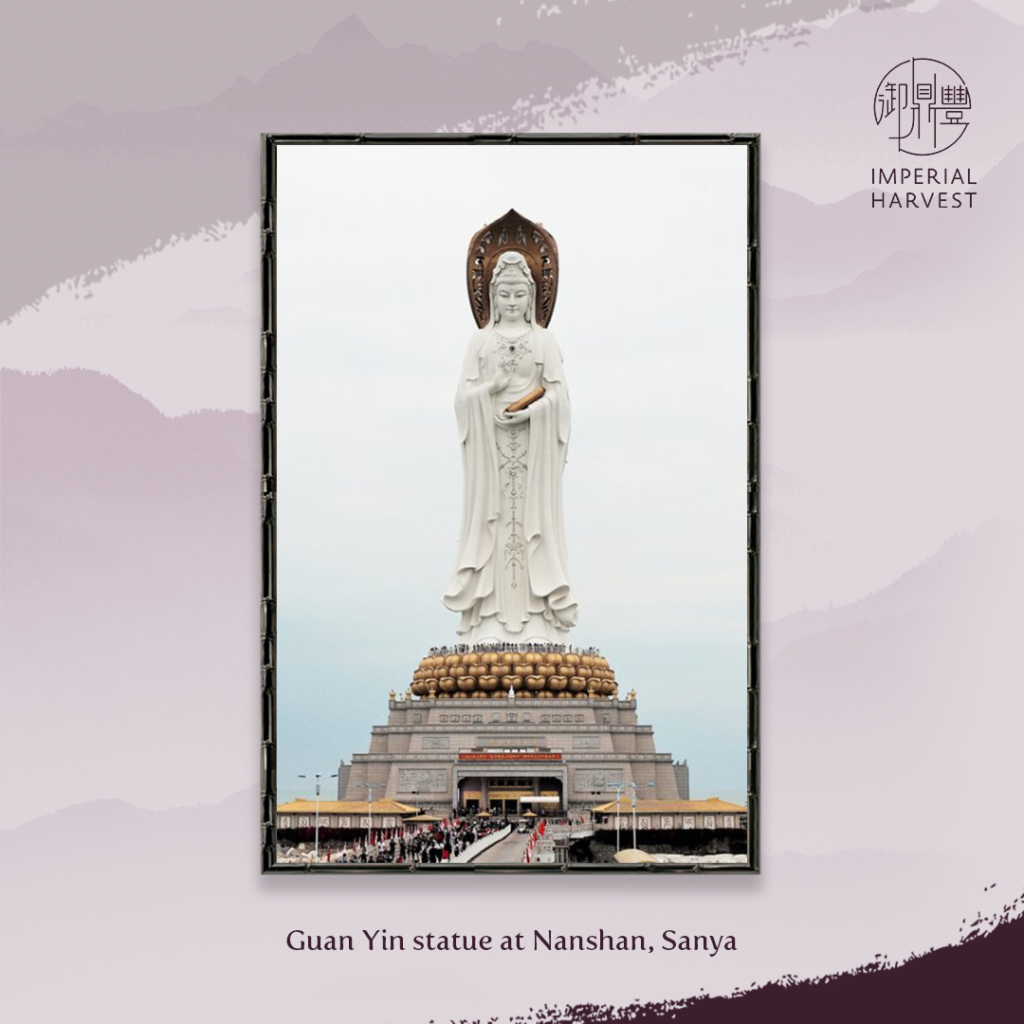 The tallest Guan Yin statue in the world, it is 108 metres tall. With three facing aspects – one inland and the other two looking towards the South China Sea, it is emblematic of Guan Yin’s promise to release all sentient beings from suffering.

It was enshrined in 2005, with blessings and prayers from 108 monks from Buddhist sects in Taiwan, Hong Kong, Macau and China. It is notable that, in Imperial Feng Shui tradition, the number 108 represents the wholeness of existence, governs astronomical distances within the solar system and dictates Chakra energies – with 108 monks gracing the auspicious event, Guan Yin’s blessings were amplified to empower all her devotees to create their desired futures and realities. Additionally, thousands of pilgrims also attended the enshrinement.

Other famous statues of Guan Yin which have become frequented tourist attractions include the 76 metres tall statue of Guan Yin in Hong Kong’s Tsz Shan Monastery, which overlooks the city’s busy harbour.

As shared on the Tsz Shan Monastery’s website, Mr Li held the strong belief that every human being holds within them “a bright pearl, long obscured by dust and toil, and when the dust is gone and its light shines forth, a myriad of illuminations blossoms across our mountains and rivers.”

In Koh Samui, Thailand, Wat Plai Laem – a temple dedicated to Guan Yin – features a statue of Guan Yin in her manifestation with 18 arms. Rising 20 metres above the complex, it creates the silhouette of a powerful embrace, exemplifying Guan Yin’s continued devotion to her cause of releasing all humans from suffering. 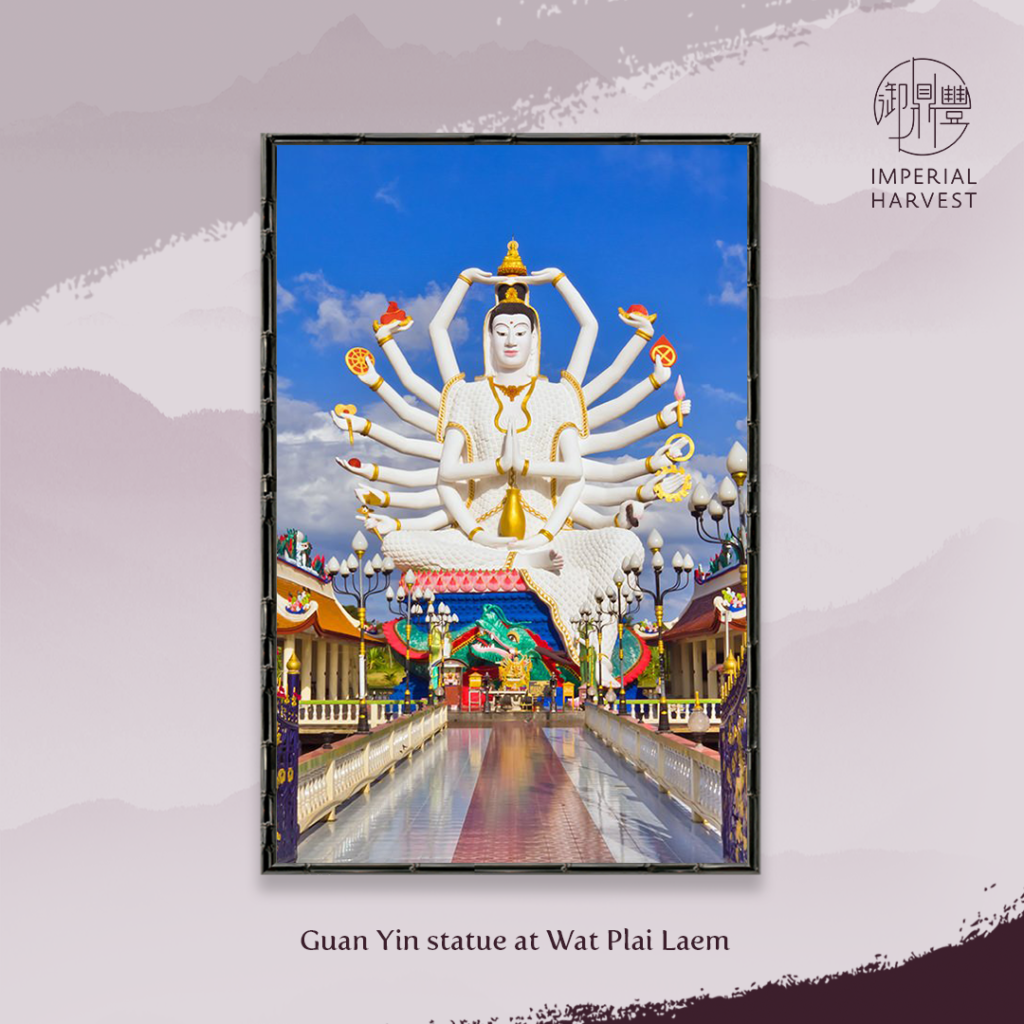 Ultimately, Guan Yin is heavily revered for her wilful sacrifice of Nirvana despite attaining Enlightenment to remain as a protector of humankind. 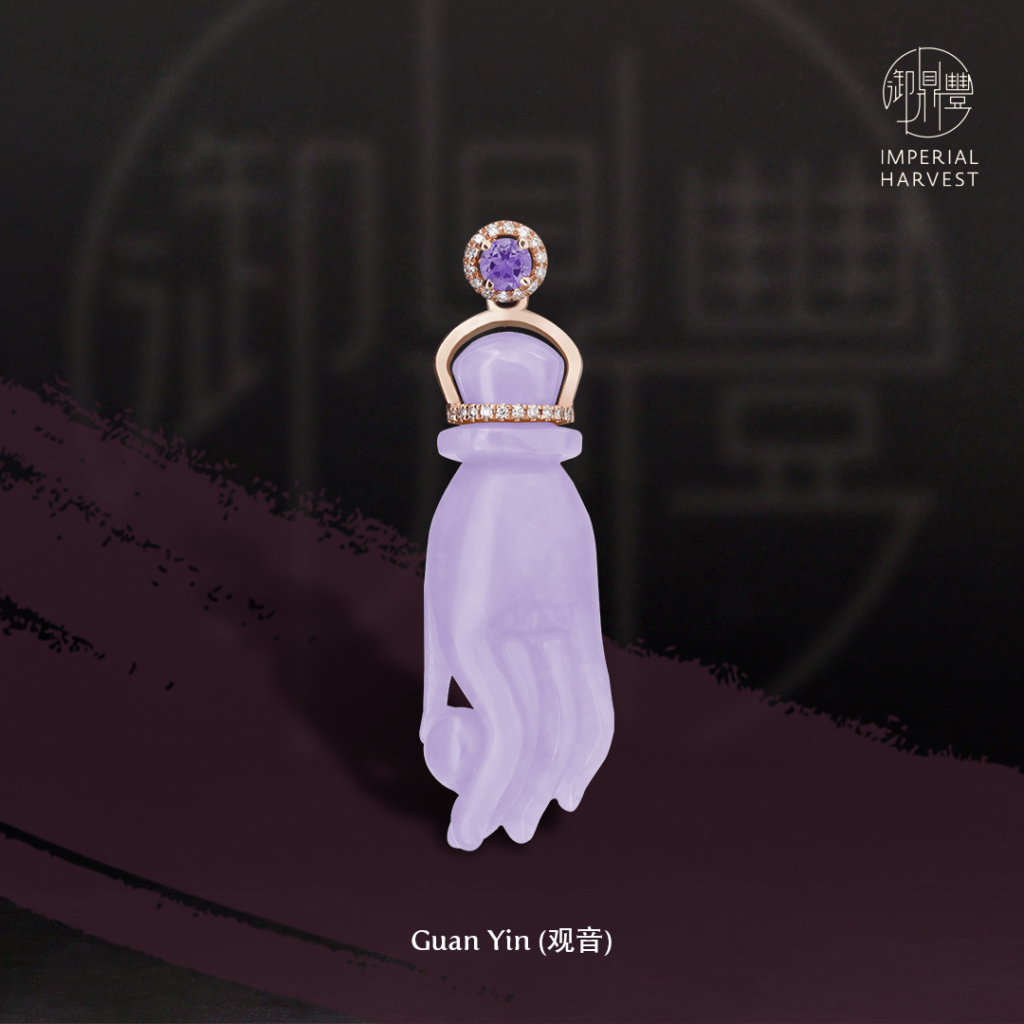 Representing the immense and boundless blessings from the Thousand Hands Guan Yin, the Imperial Harvest Fine Jadeite Midas Touch elegantly embodies the slender hand of the Goddess of Mercy (the Bodhisattva of Compassion and Mercy), holding the wish-fulfilling pearl.

A firm favourite of many blessed Imperial Harvest clients for its tasteful artistry and impeccable craftsmanship, the Imperial Harvest Fine Jadeite Midas Touch is specially designed to attract strategic benefactors and powerful mentors. It empowers its destined owner to rise to the top of the corporate ladder and secure valuable advancement opportunities.

The water star is a spatial wealth star which governs intuition, wealth and opportunities. When activated, it catalyses the flow of prosperous wealth energies in their destined owners’ properties. Since Imperial China’s dynastic rule, the use of natural crystals has been established as the authentic method for activating the water star in all properties. 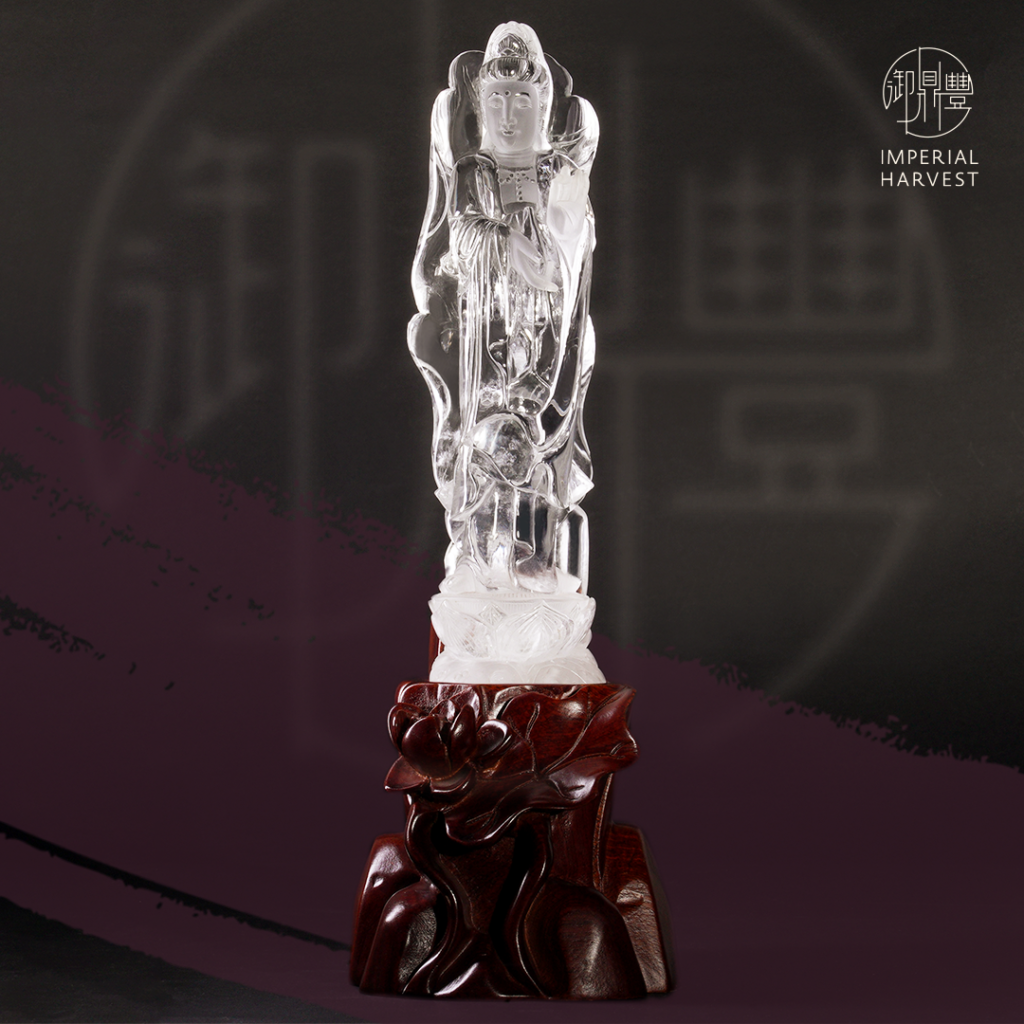 Design notes: Guan Yin’s water vase is one of eight important Buddhist symbols. It contains water as pure as the sweet nectar of life.

The design is symbolic of Guan Yin showering her devotees with wealth, benefactors and opportunities to achieve breakthroughs and success. 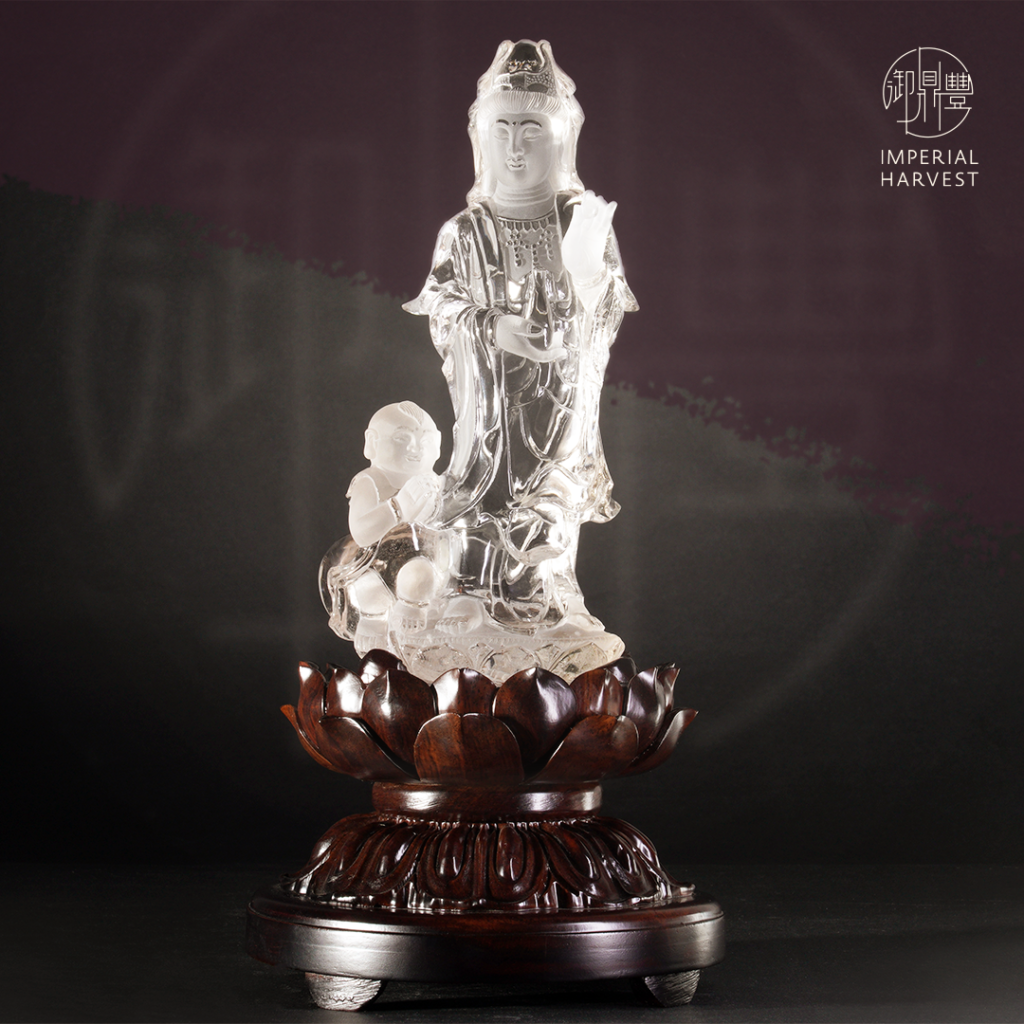 The powerful duo bestows upon their faithful devotees financial abundance, success and breakthroughs.

Design notes: Guan Yin holds the well known vitarka mudra. The vitarka mudra is the hand sign held by Amitabha Buddha himself, formed when the index finger and thumb touch to form a seamless circle.

It symbolises the continuous flow of wisdom. The remaining three fingers pointing to the skies symbolise the attainment of Nirvana in the Heavens.