Posted by Imperial Harvest on 16 December 2022

Why the Winter Solstice is important in Imperial Feng Shui

Dongzhi (冬至), or the winter solstice, is one of the most culturally and spiritually significant occasions in Chinese history. A revered time of self-reflection and fresh beginnings, this period of rebirth and renewal encourages individuals to pursue new opportunities into the new year.

The winter solstice forms the 22nd out of 24 solar terms in the lunar calendar and falls on 22 December this year.

In ancient China, the winter solstice originally celebrated the end of the harvest season, with a longstanding history that references the yin and yang philosophy of balance and harmony. 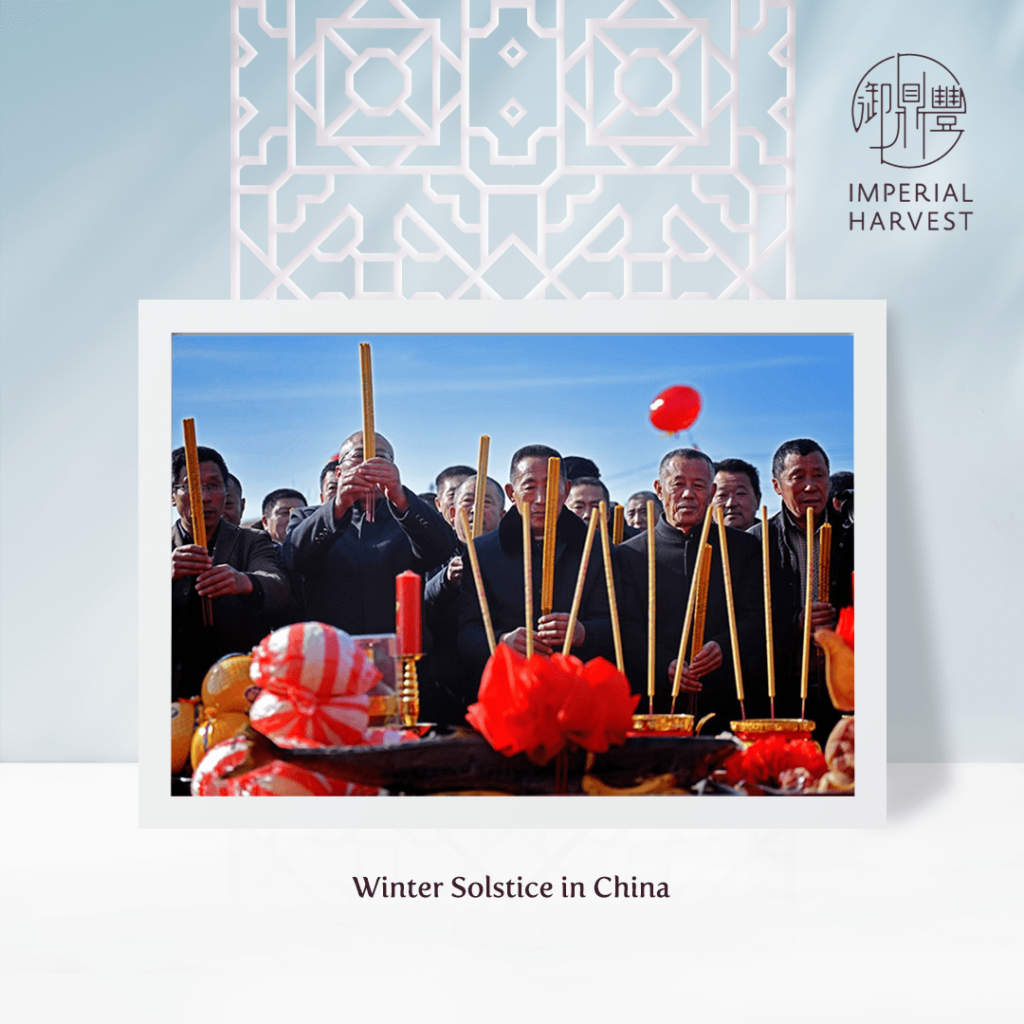 The philosophy and theory of yin and yang denote that the winter solstice marks the day that the forces of major yin meet the minor yang, thereby renewing the cycle of balance. As the winter solstice passes, daylight hours grow increasingly longer, indicating an increase in positive energy.

In the annals of imperial China’s illustrious history, the winter solstice stood as a cherished and defining event in the imperial court calendar. Rites and rituals for the winter solstice were conducted with utmost reverence and conscientiously upheld by generations of Chinese emperors and court officials. These grand commemorations took the form of remarkable tributes, offerings and prayers. 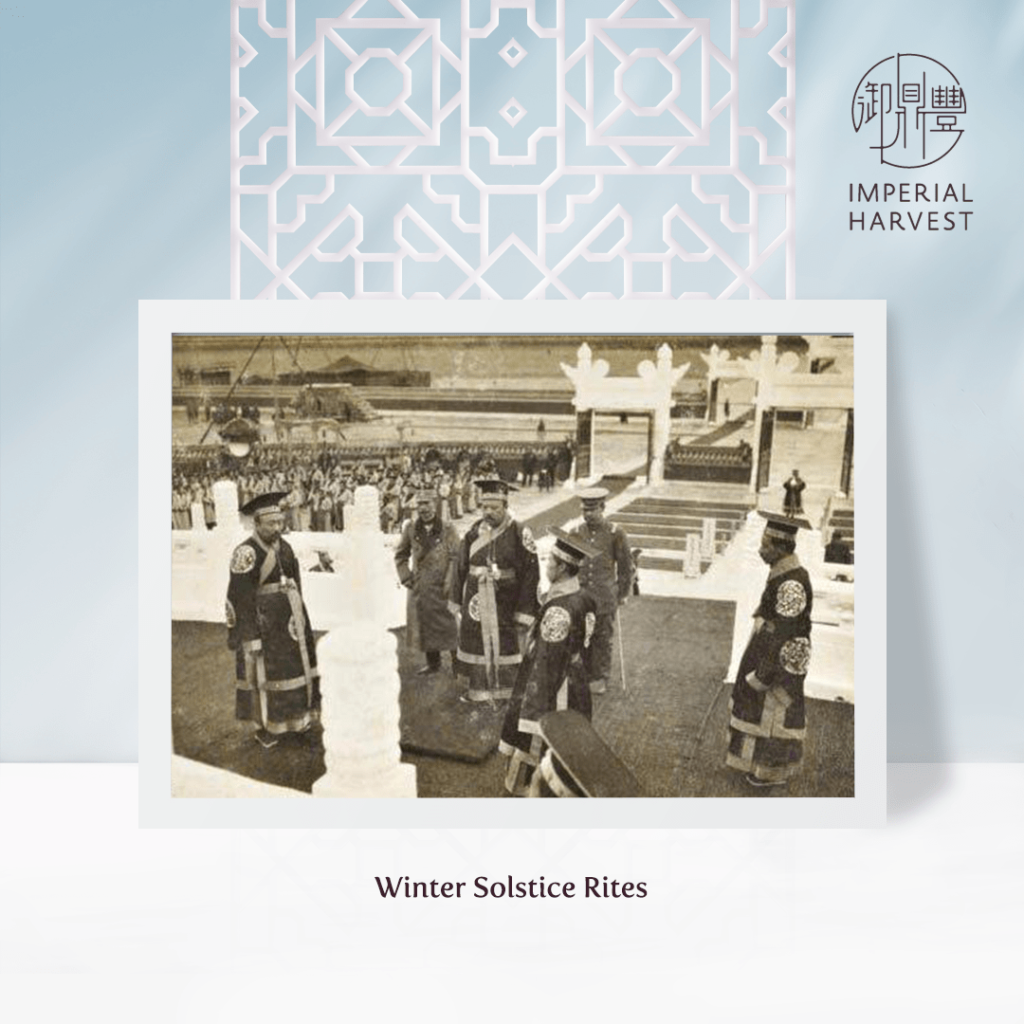 Throughout China’s history as an agricultural society, its social and economic success largely depended on bountiful harvest seasons. The emperor, in his role as the Son of Heaven, undertook the principal role of conducting worship and gratitude to the Heavens for the year’s bounty.

This undertaking was crucial to the imperial Chinese empire, which regarded the Heavens as an omniscient and omnipotent force overseeing and balancing all aspects of society.

In the weeks leading up to the winter solstice, the Forbidden City would experience a great flurry of activity in preparation for the ceremonial rites and rituals to be conducted during the winter solstice. The winter solstice rites culminated in the emperor venturing to the Temple of Heaven, conducting annual prayers and elaborate rituals to give thanks for the year’s harvest, as well as to usher in continued prosperity, abundance and harmony in the next year. 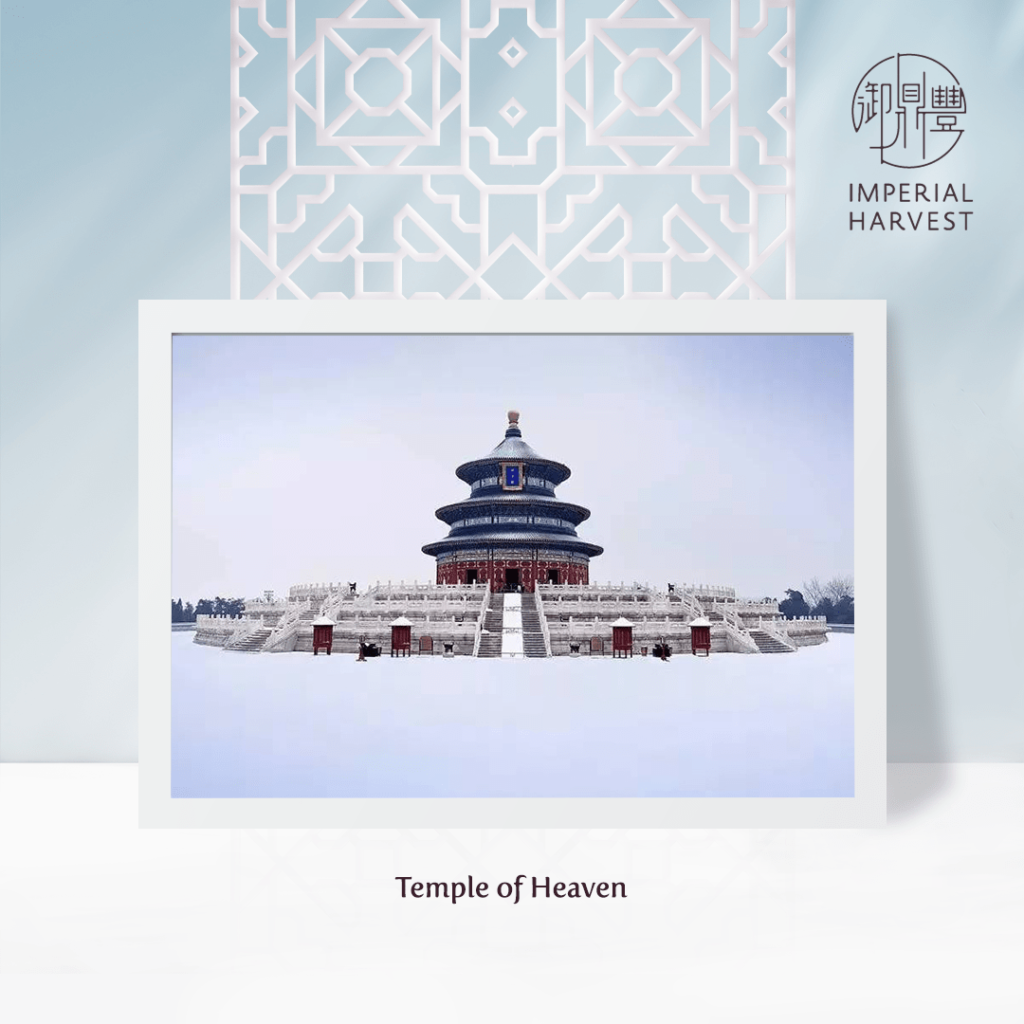 Imperial Harvest has always been inspired by the rich history, culture and architecture behind the Temple of Heaven — the home of Imperial Feng Shui. For generations, the Temple of Heaven symbolised the profound relationship between heaven and earth, remaining the foremost site of heavenly worship. It stood at the centre of sacred winter solstice rites in imperial China, with the spiritual and cultural significance surrounding this majestic historical landmark bolstering its status as the home of Imperial Feng Shui.

The Bliss of Harvest: Temple of Heaven collection is created from a proprietary blend of gold, silver and copper — resulting in an exquisitely crafted 18-karat rose gold collection that represents elements of Heaven, earth and humanity. Crowning every Imperial Harvest Bliss of Harvest Temple of Heaven ring is a fine jadeite cabochon, which bestows heightened intuition upon its destined owner. Heightened intuition empowers individuals with sound decision-making skills necessary to seize first-mover advantages. 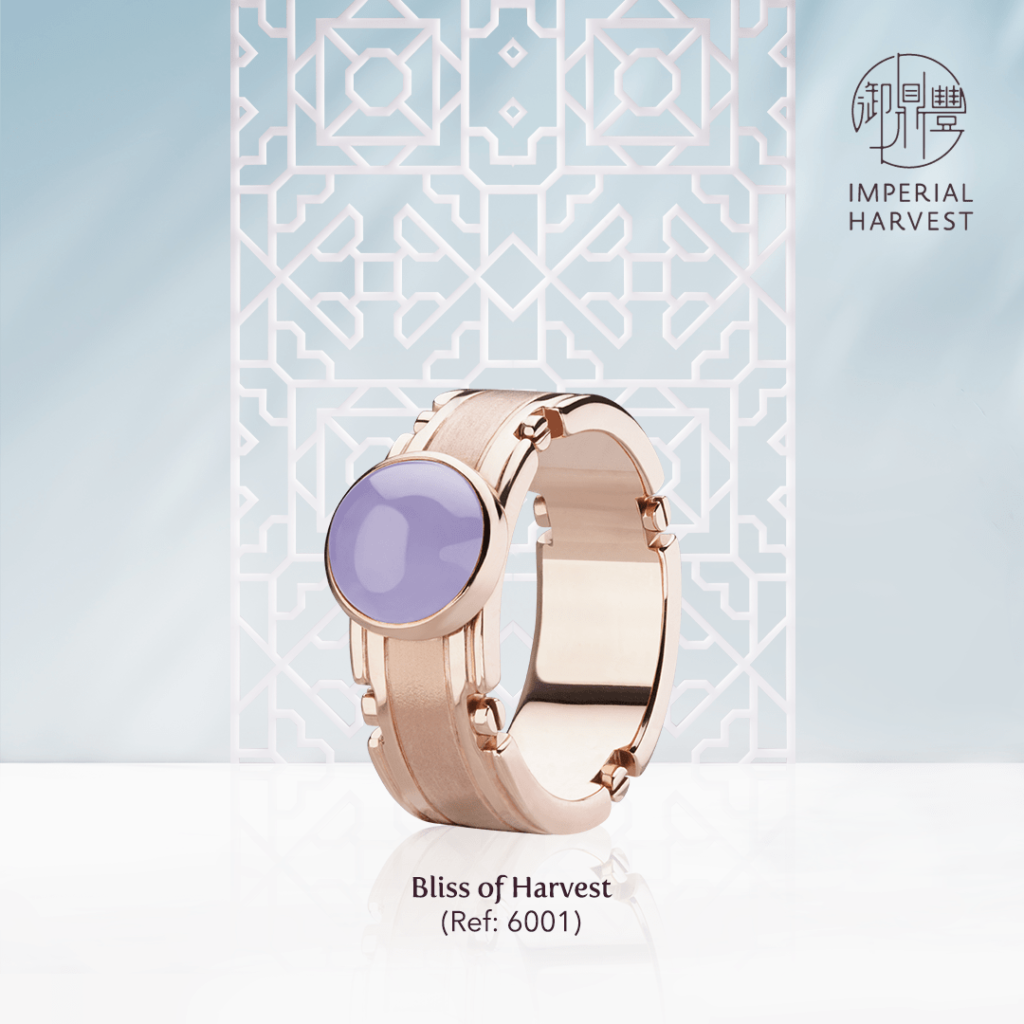 This Imperial Harvest Bliss of Harvest ring references the harmonious balance of yin and yang, featuring an eye-catching contrast of matte and mirror finishes. A recurring design theme throughout the collection, this ring is accented by four screws placed equidistant from each other, this ring takes inspiration from the four innermost pillars of the Hall of Prayer for Good Harvests. 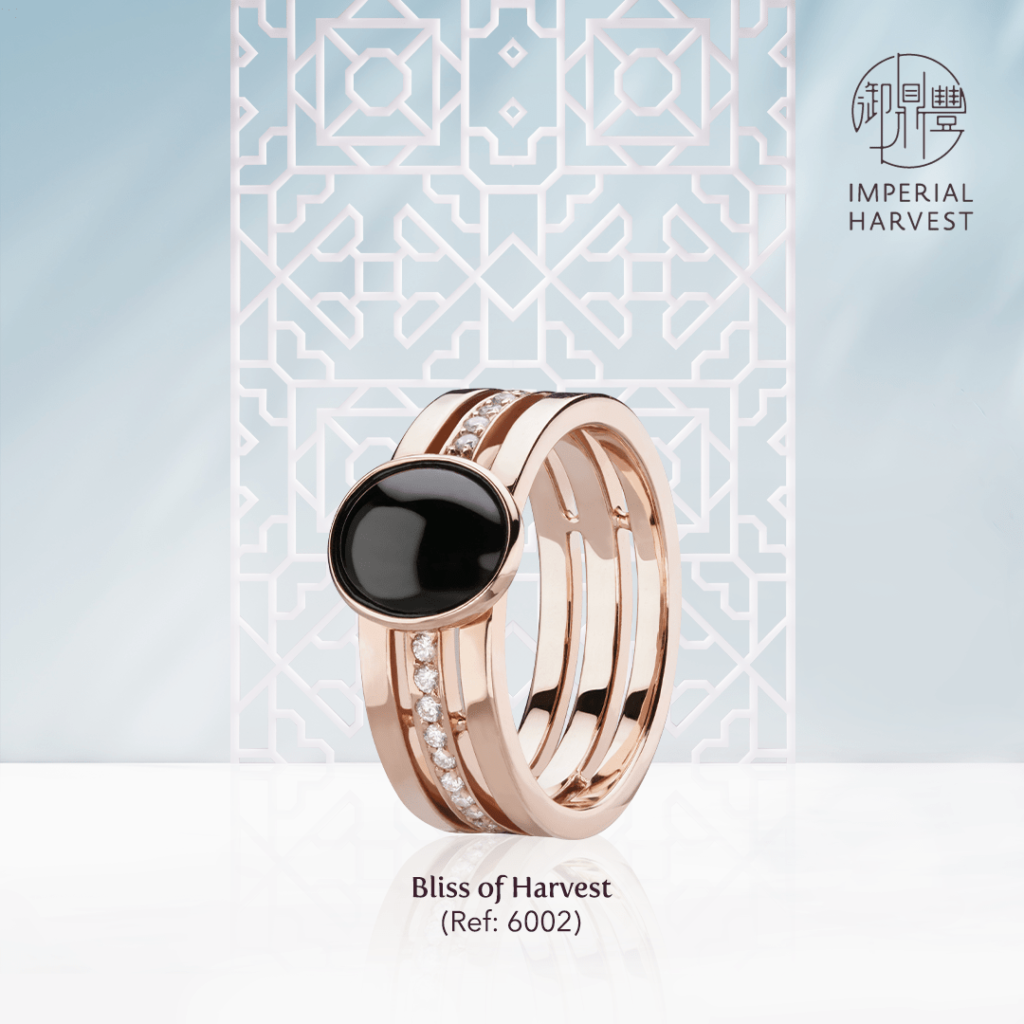 Contrasting the understated elegance of the preceding Imperial Harvest Bliss of Harvest ring, this ring features a stunning diamond-studded inner band, inspiring a bright future of hope, promise, and monumental achievements on its destined owner’s horizon. The four pillars interspersed along the ring band represent the four inner pillars in the Hall of Prayer for Good Harvests at the Temple of Heaven. 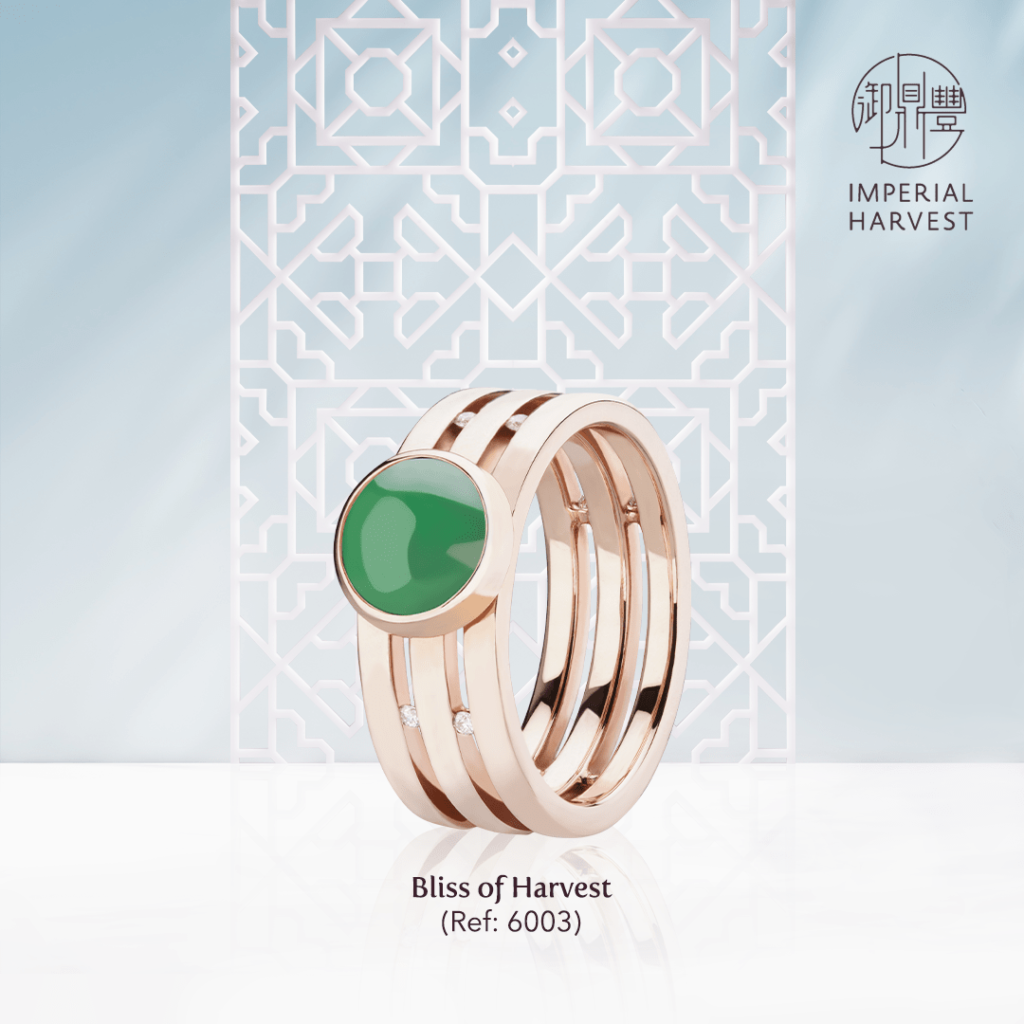 Paying homage to the sacred Hall of Prayer for Good Harvests, this ring features eight brilliant-cut diamonds that form the four innermost structural pillars. A gleaming, hand-burnished mirror finish elegantly accentuates three distinct bands in this Bliss of Harvest ring, interspersed by the pillars. They form a captivating frame for the ring, creating a foundation that suggests both physical and metaphorical support. 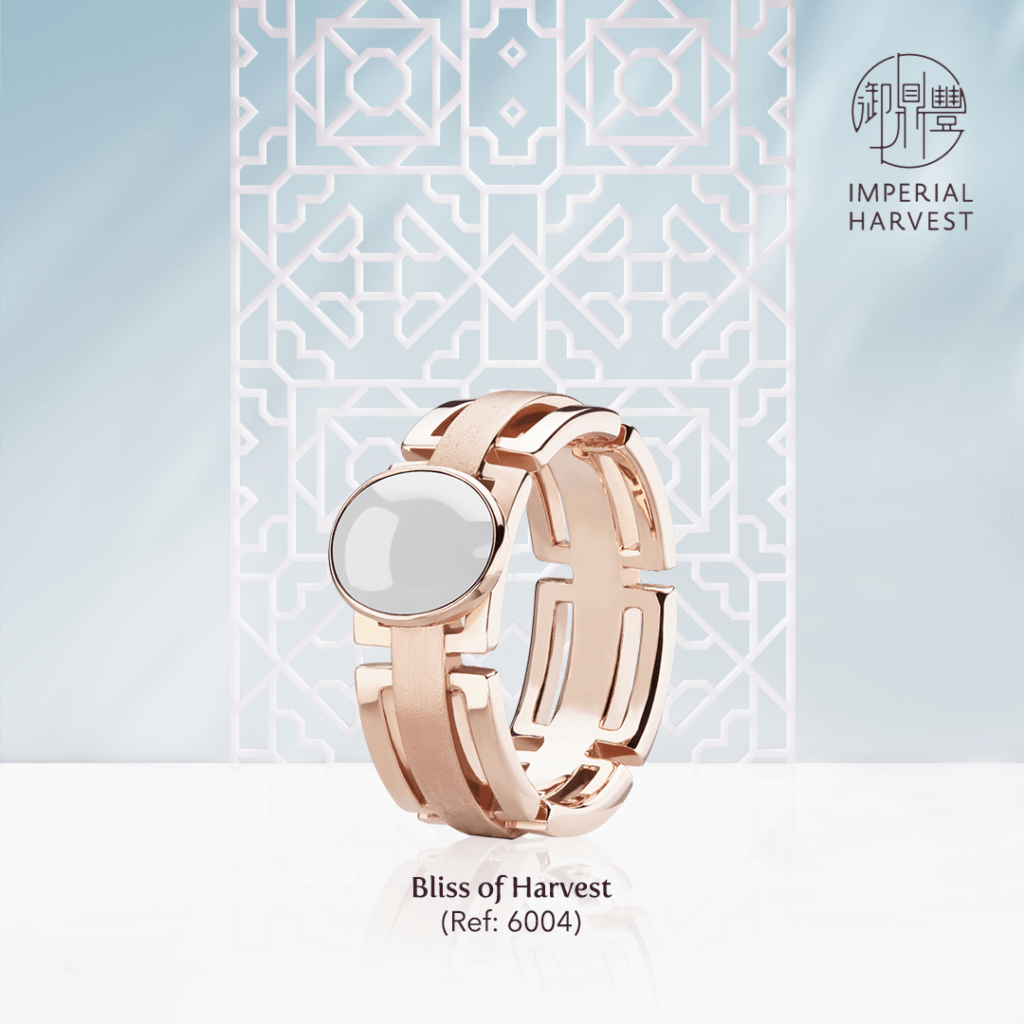 This Imperial Harvest Bliss of Harvest ring features a distinctly geometric design which echoes the Hall of Prayer standing in the square yard. This design is inspired by the Chinese saying, ‘Round Heaven and Square Earth’ (天圆地方), and represents the relationship between Heaven and Earth. A contrast between matte and mirror finishes brings a tasteful contemporary elegance, alluding to a harmonious balance between the forces of yin and yang.

The unique aesthetic of the matte tri-band design sets this Imperial Harvest Bliss of Harvest ring apart from the others in the collection. Its abstract and minimalist design uses the art of perspective, folding and weaving the ring band into a structurally robust and discerning design that exudes a restrained sense of power.

In imperial China, the Temple of Earth was host to imperial rites and rituals surrounding the summer and winter solstices, remaining one of China’s most important historical monuments. Its architecture adheres to Chinese principles, most notably ‘Round Heaven and Square Earth’ (天圆地方).

This edition pays tribute to time-honoured imperial Chinese traditions, featuring four exquisite designs inspired by the distinctive architecture of the Temple of Earth. 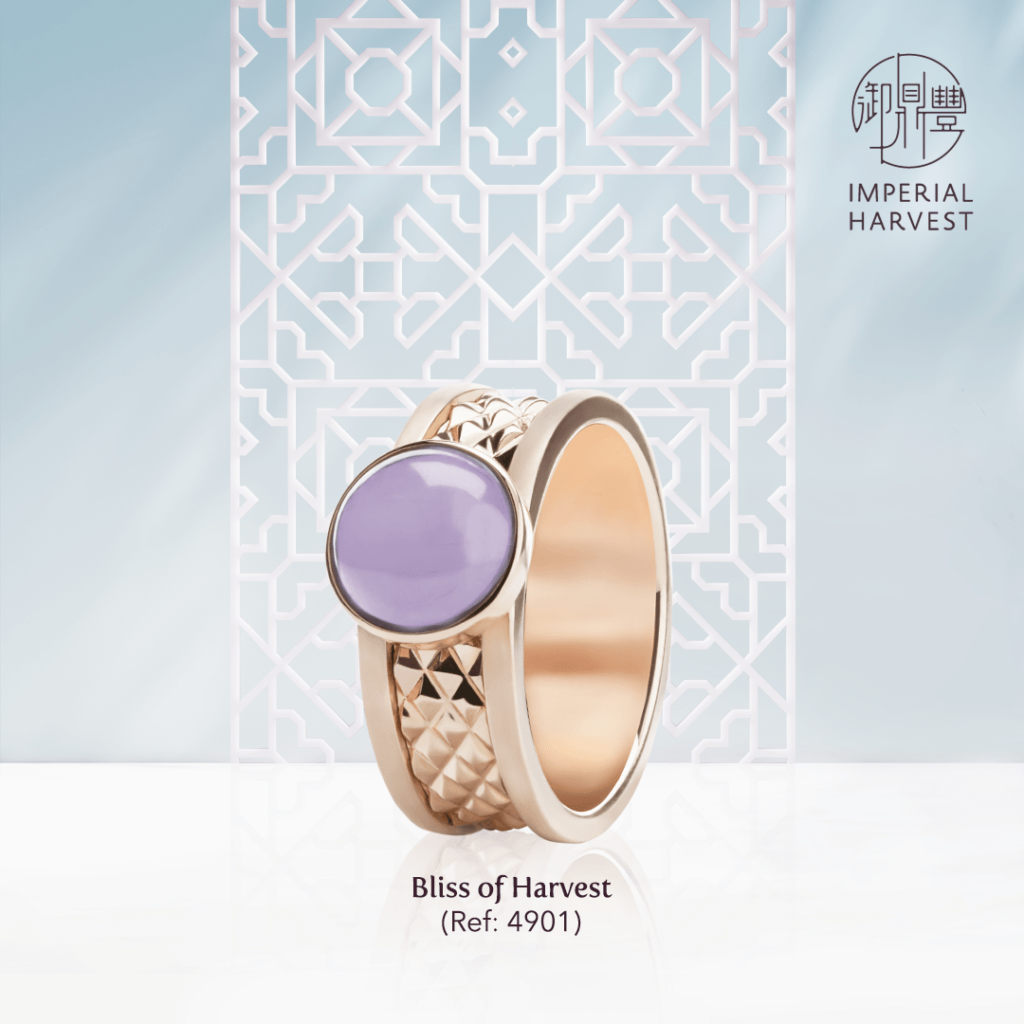 Boasting a distinct and skillfully engraved square-tile surface. this ring is strongly reminiscent of the square-shaped architecture of the Temple of Earth. This Bliss of Harvest ring’s design similarly resonates with the saying, ‘Round Heaven and Square Earth’ (天圆地方) and features a smooth and luminous jadeite cabochon set in the exquisitely square-tiled band. 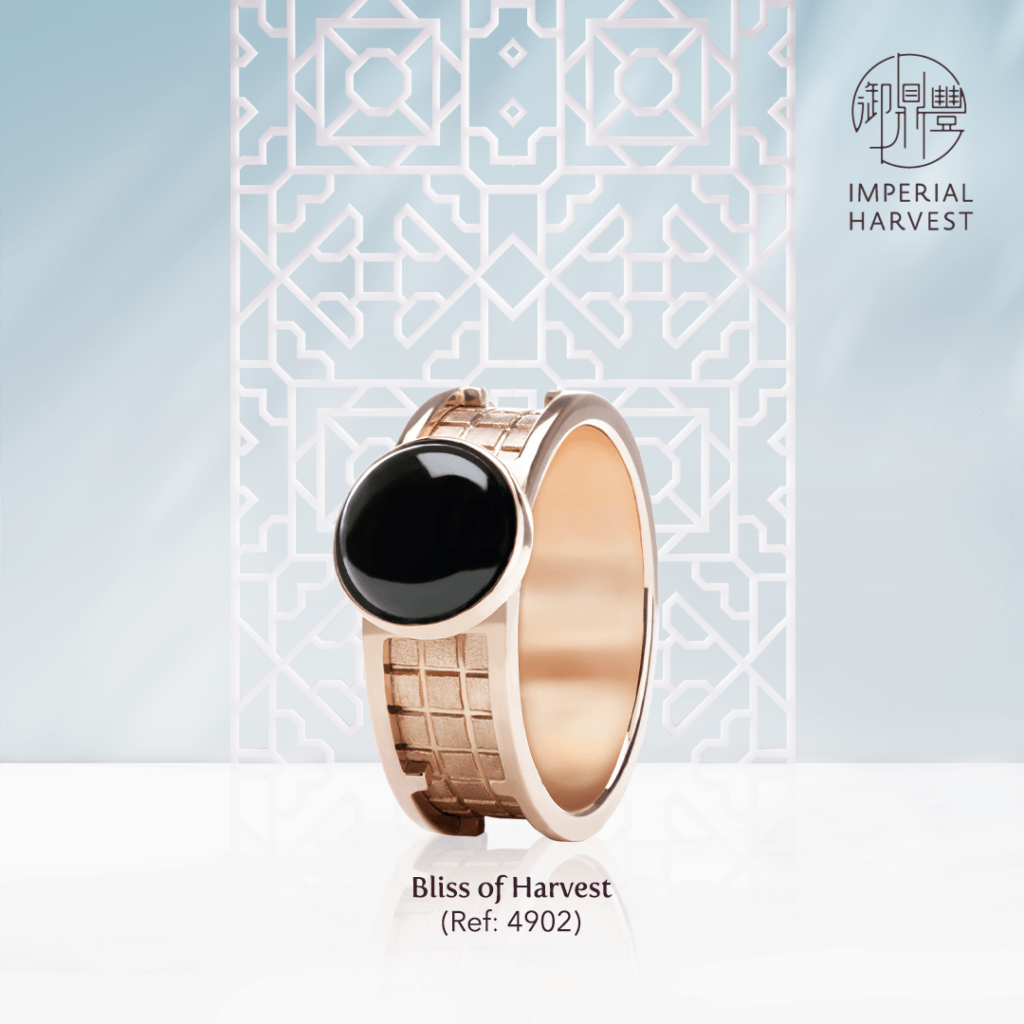 Strongly resembling the roof of the Temple of Earth, this ring features a guilloched hobnail pattern in the ring band. The inlaid pyramid pattern is hand-polished to perfection, boasting a matte and mirror finish. This meticulous detailing gives rise to an Imperial Harvest ring that is perfectly symmetrical from any angle and catches the eye with its depth and dynamic movement. 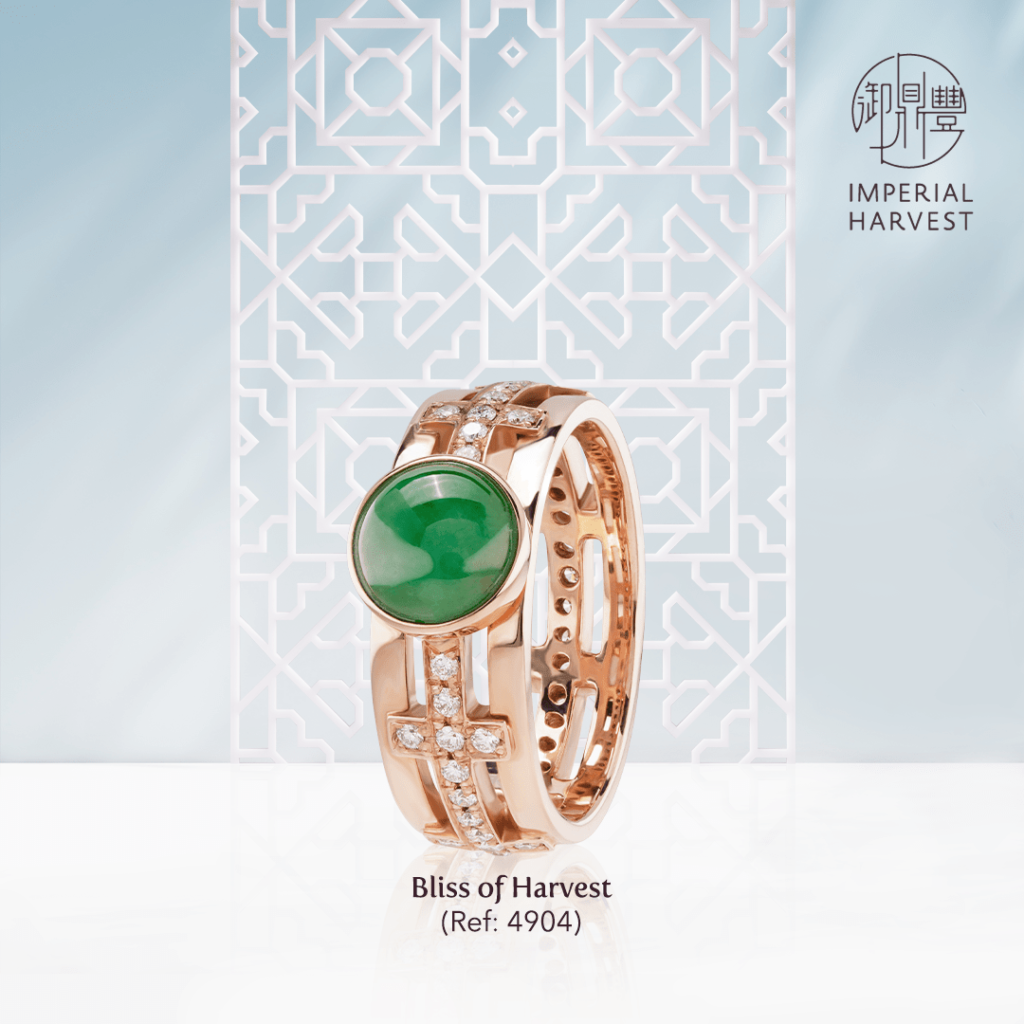 Inspired by the Temple of Earth’s distinct architecture, this ring features a stunning diamond-studded band, set in a design reminiscent of the gates surrounding this hallowed landmark — inspiring a future of hope, positive prospects, and monumental achievements on the horizon. 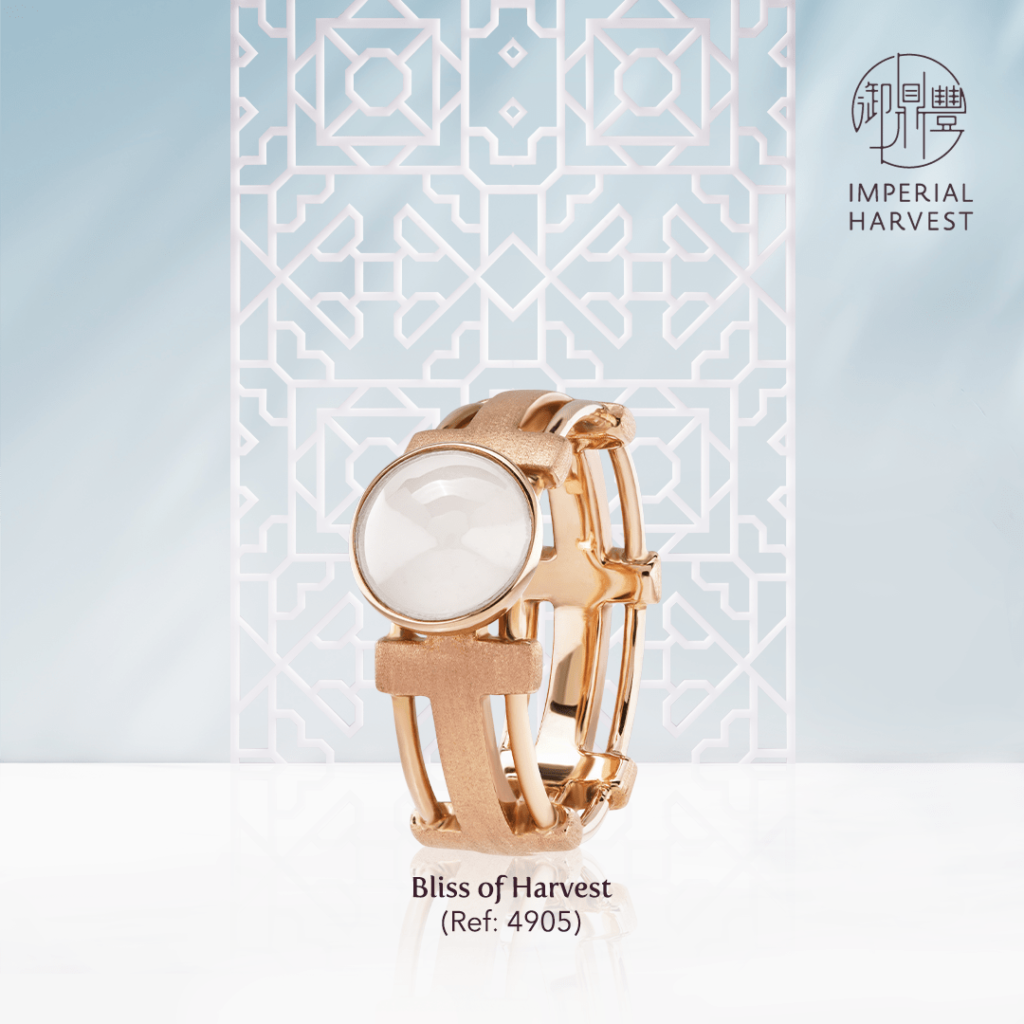 The understated elegance of this Bliss of Harvest Temple of Earth ring complements the lustrous jadeite cabochon, creating a captivating contrast between both elements. Conceptualised as works of wearable art, each ring is designed to encourage wealth, abundance and success.

Four Generations of Bliss of Harvest