Marking a period of joviality, abundance and success, the Summer Solstice falls on 21 June this year.

Featuring two exquisite designs inspired by the intriguing architectural footprint of the Temple of Earth, this tributary collection pays homage to the Ming and Qing Dynasty’s Summer Solstice traditions.

With extreme attention to detail, each ring band comprises a unique combination of several finishes – matte, satin and mirror. Polished by hand to perfection, the All-New Bliss of Harvest Rings: Temple of Earth Edition are designed to make an everyday statement. 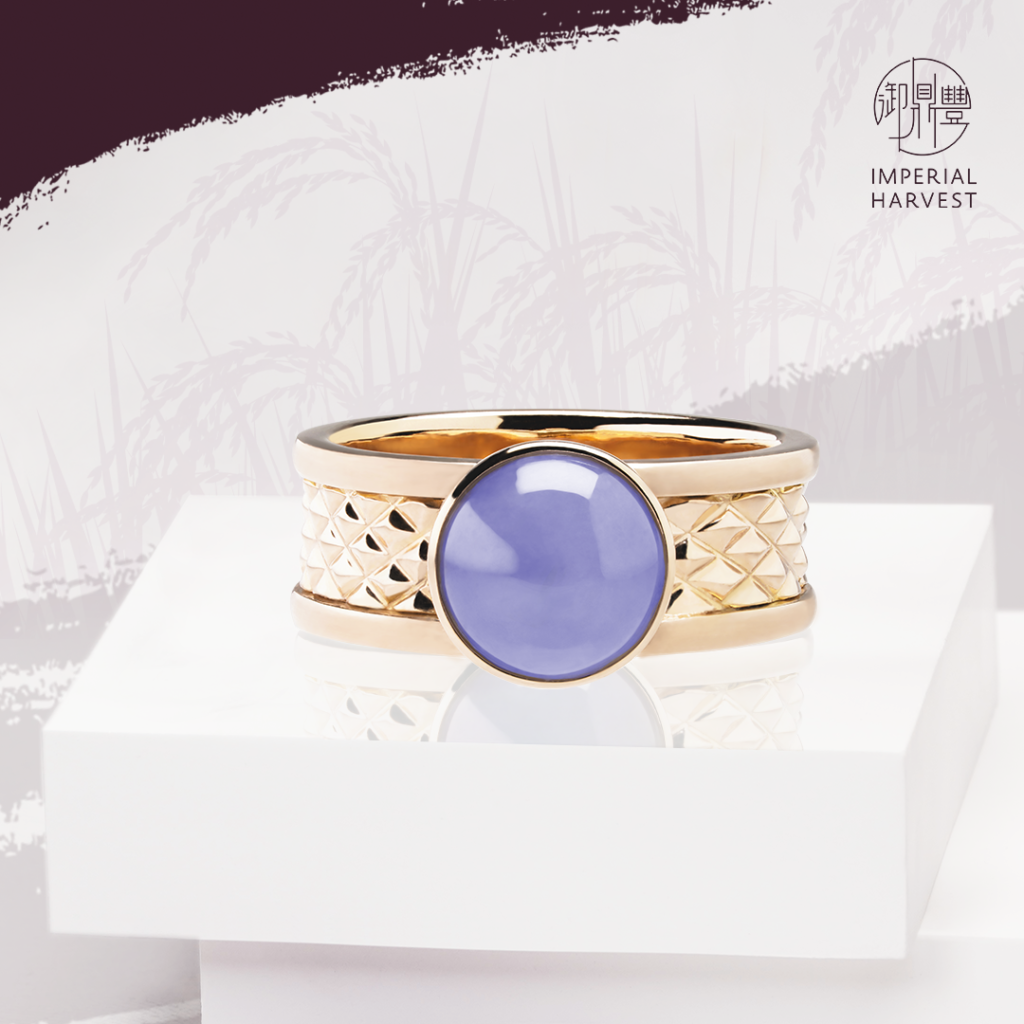 Featuring an exquisitely guilloched hobnail pattern known in the design world as the Clous de Paris, the All-New Bliss of Harvest Diamond-Tiled Jadeite Cabochon Ring strongly resembles the roof of the Temple of Earth. With small pyramid knobs, a regular four-sided pattern congruous to the Temple of Earth’s diamond-shaped roof is elegantly evoked.

Hand-polished to perfection, each ring boasts a satin-brush and mirror-polish contrast. With a matte rim and meticulously textured bas-relief inspired ring band, the All-New Bliss of Harvest Diamond-Tiled Jadeite Cabochon Ring is perfectly symmetrical when viewed from any angle.

Designed to an exacting precision, each ridge of the ring displays an intriguing effect of metallic reflectiveness. A visual symphony is created as light hits the ring at different angles, creating impressions of depth, luxurious lustre and dynamic movement.

A tasteful fusion of East and West, each ring pays homage to the balanced architectural structure of the Temple of Earth through the Western technique of manual guillochéing. This process is time-consuming and requires utmost focus – each ring’s satin engravings are of the exact same depth and consistency.

At Imperial Harvest, experienced guillochéurs engineer the guilloching process manually. To achieve top consistency in each ring, the guillochéur personally rotates and orientates the ring – by applying various amounts of pressure to advance the ring against a customised cutter, each engraving is chiseled onto the ring methodically. Any unsteadiness in the guillochéur’s movements can cause unevenness and inconsistencies in the ring band.

Dedicated to delivering only the best, Imperial Harvest perseveres with the manual guillochéing process despite its time-consuming nature. Today, the art of manual guillochéing is deeply endangered in the world of contemporary luxury – only a few brands such as Patek Philippe remain devoted to this practice. 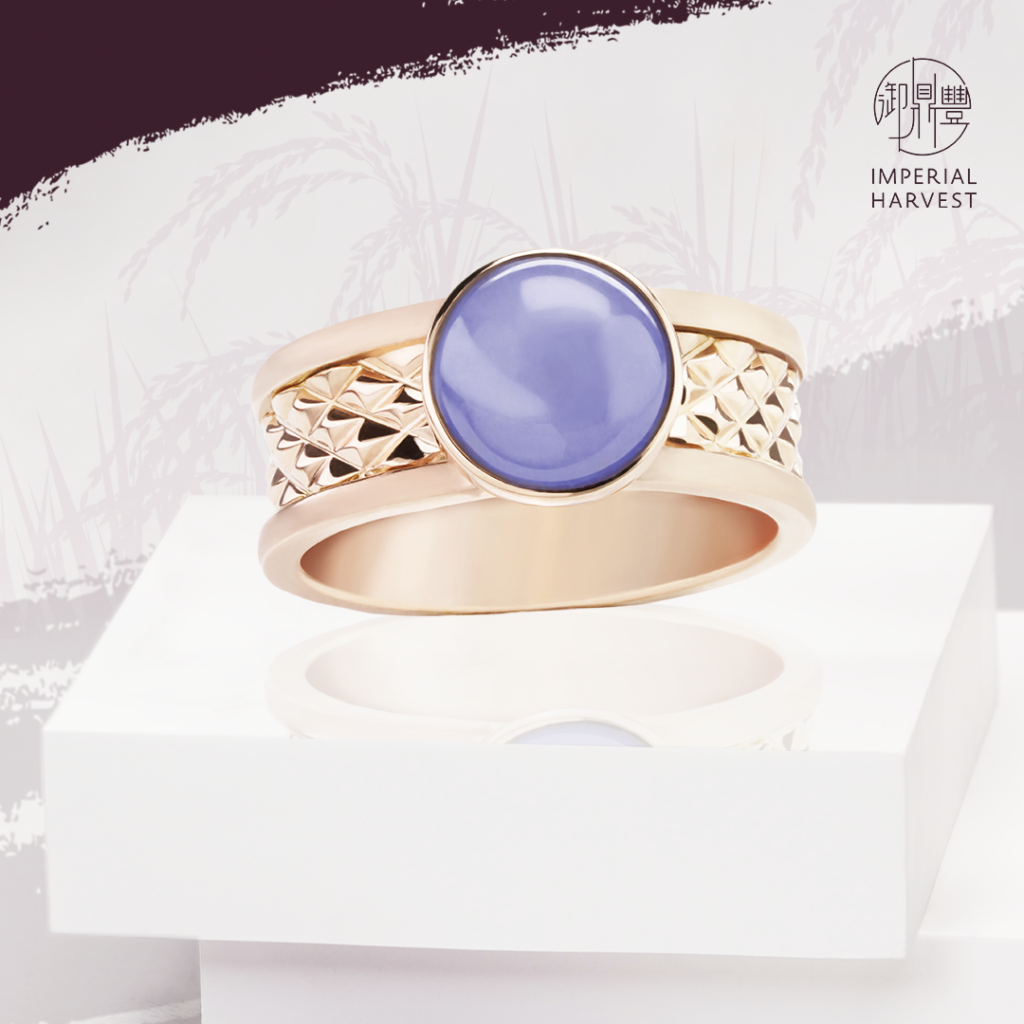 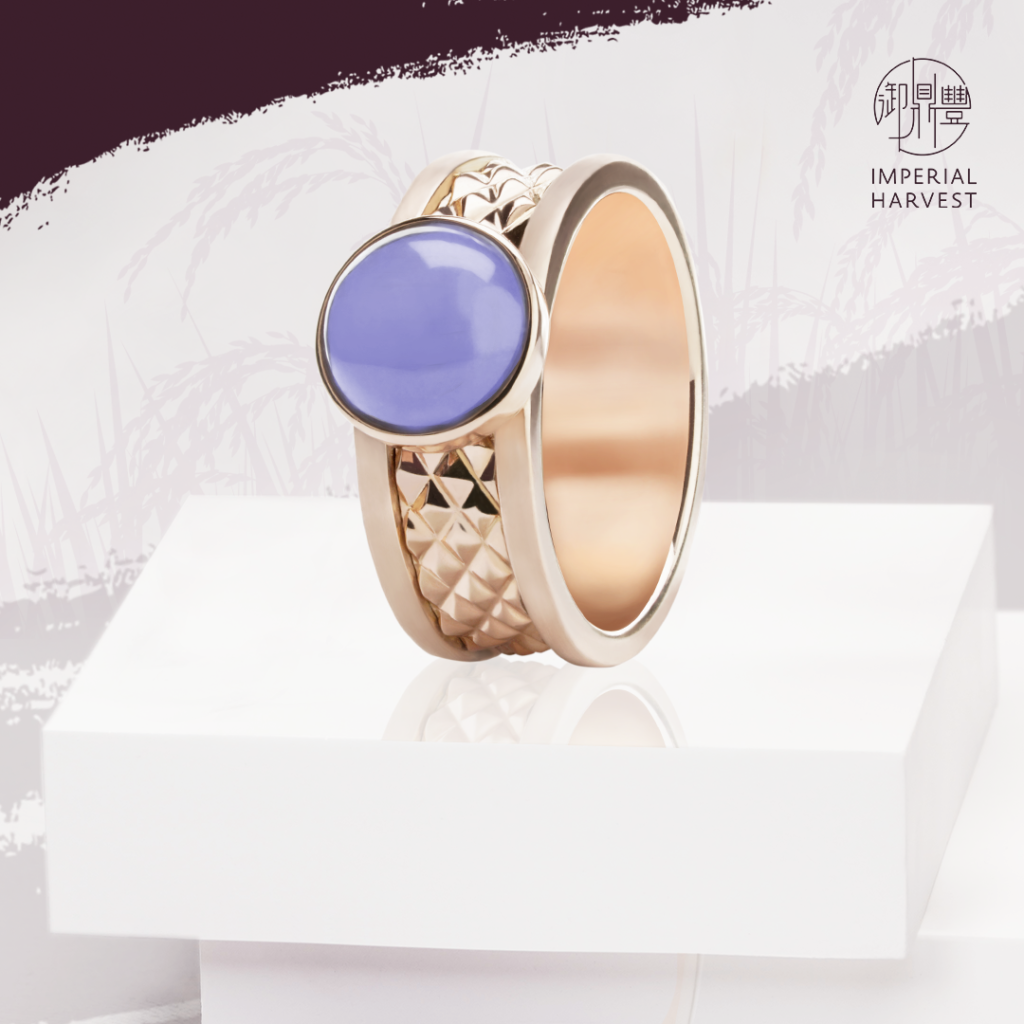 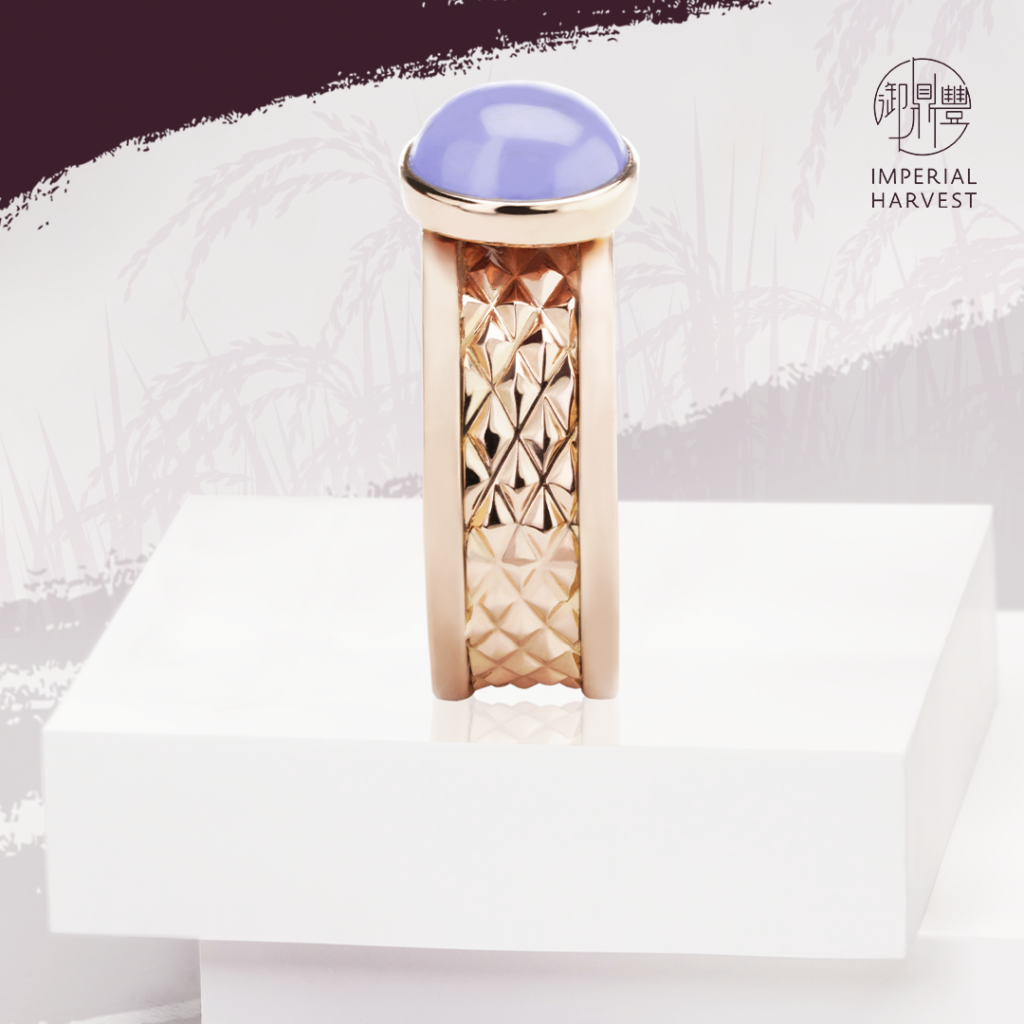 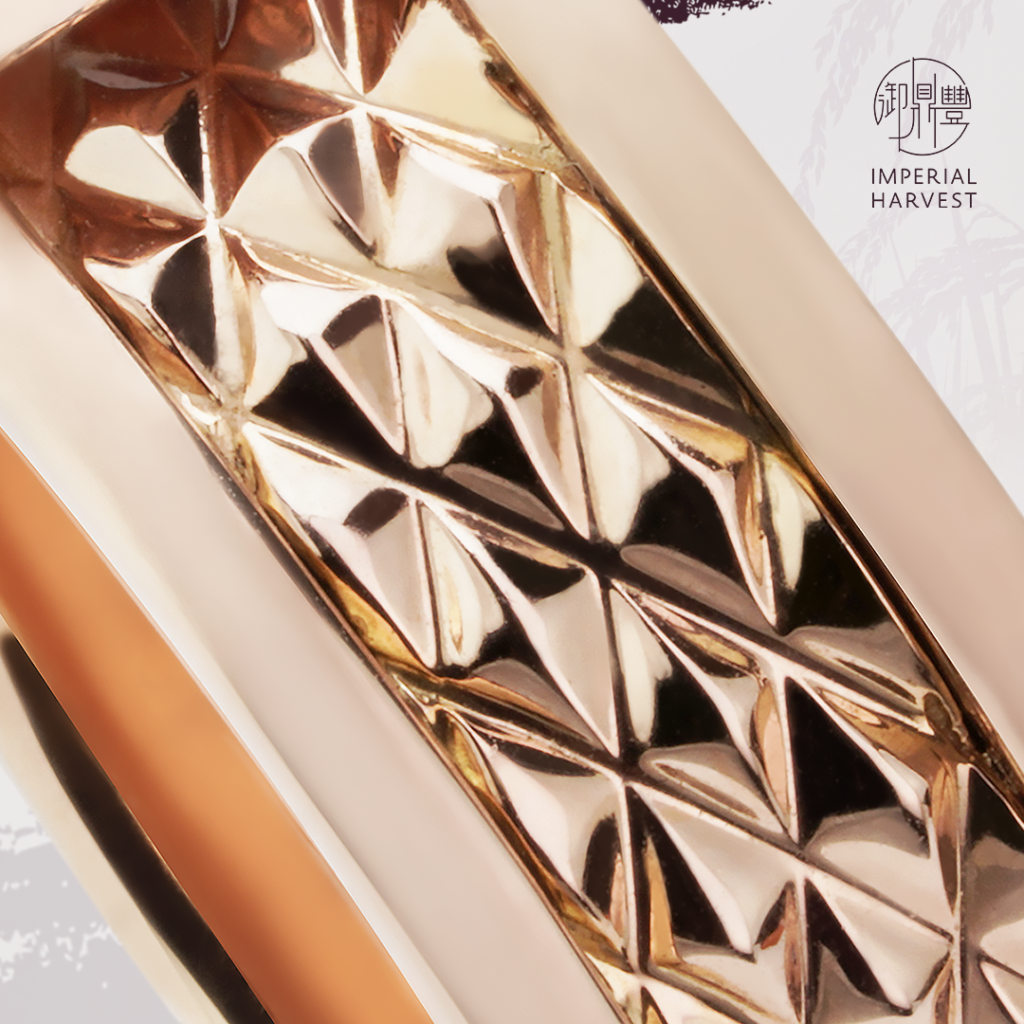 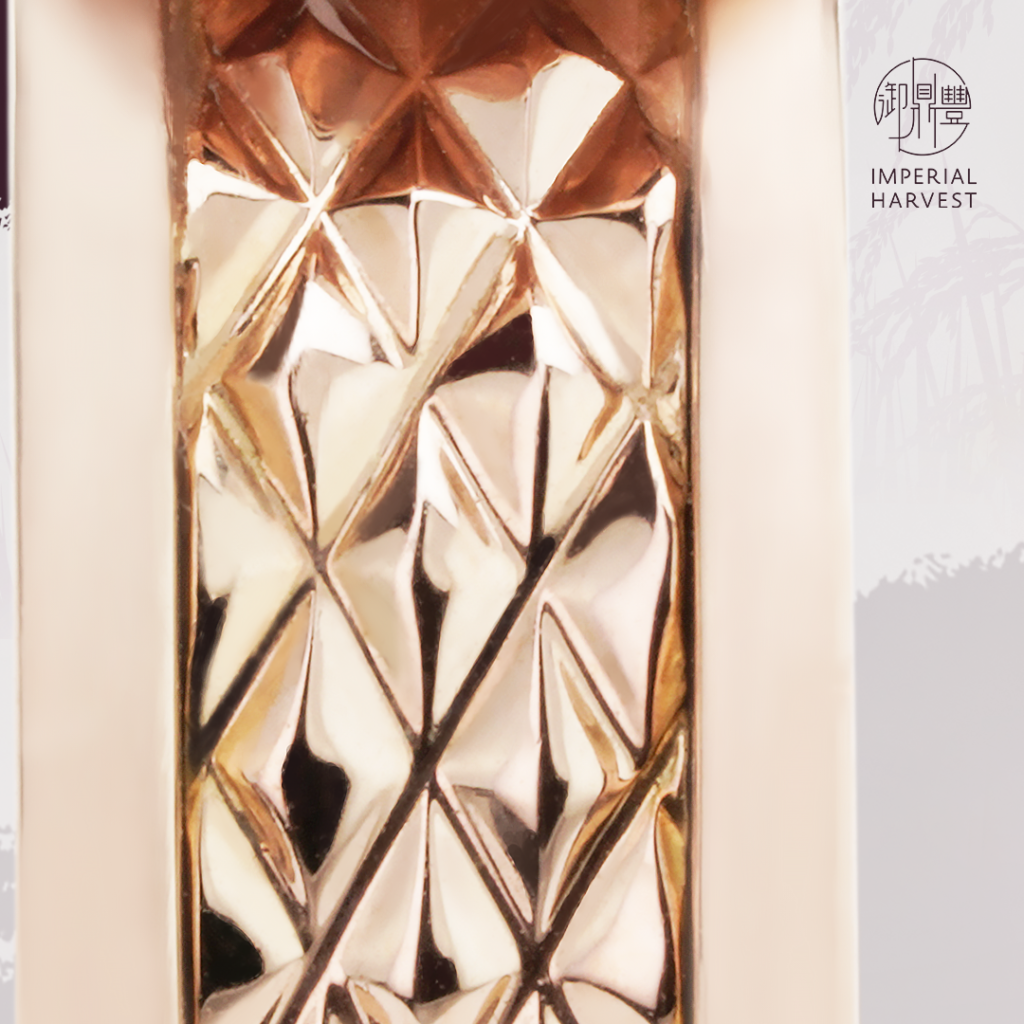 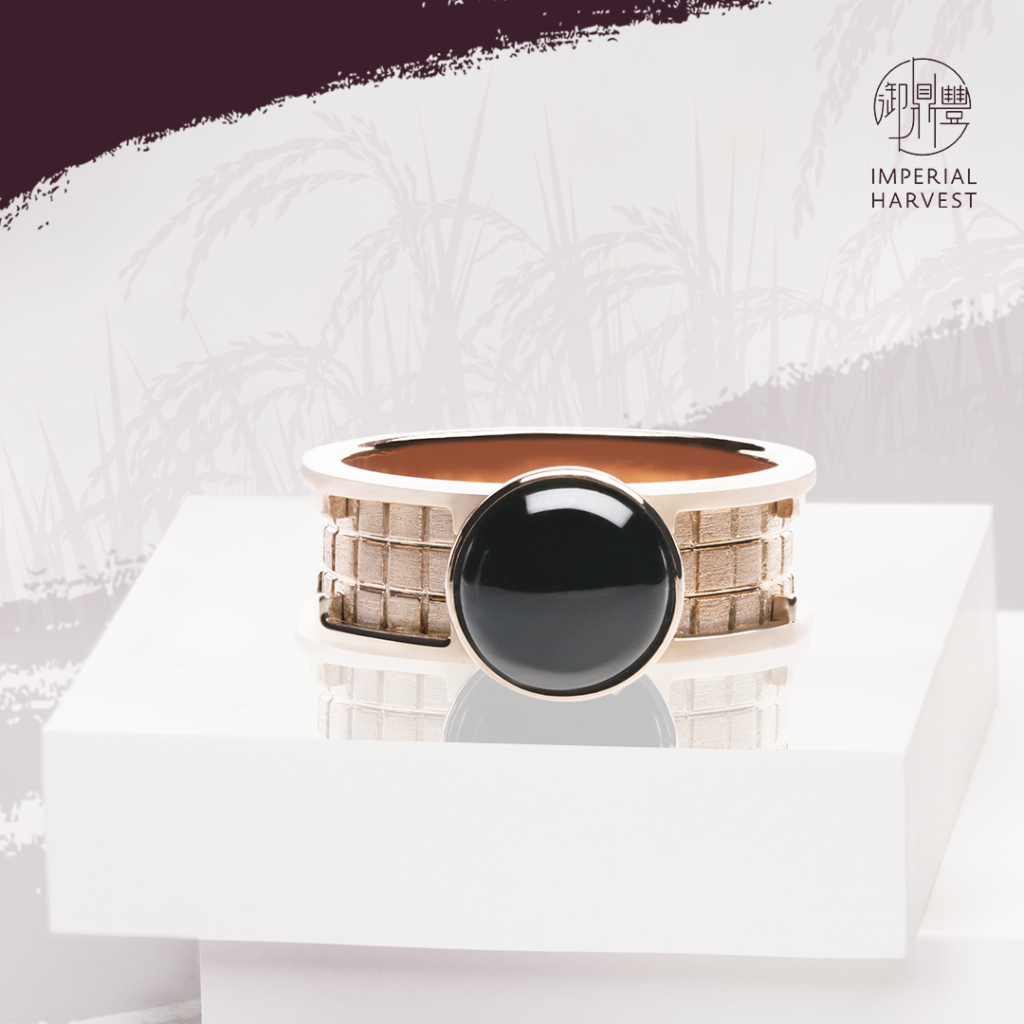 During the Ming and Qing Dynasties, The Temple of Earth was patronised yearly by the reigning emperor during the Summer Solstice. An elaborate worship ceremony with sacrificial offerings to the God of Earth was believed to bring about a year of bountiful harvests for the kingdom.

Inspired by rites and rituals during the Summer Solstice, the All-New Bliss of Harvest Square-Tiled Jadeite Cabochon Ring pays homage to the Temple of Earth as a sacred site of worship. Resonating deeply with the Chinese philosophy of “天圆地方” (literally translated into “Round Sky, Square Earth”), the ring features a smooth and luminous jadeite cabochon sitting as the centre-piece on the exquisitely square-tiled ring band.

To achieve the contrast between the ring band’s matte square-tiles and rim’s high-shine mirror finish, a skilled engraver carefully uses a burin to create the granular surface overlaying each individual square tile. The final result – a fine, granular finish in sharp distinction from the ring’s glossy rim – is achieved with a technique known as tremblant engraving. Attentively applying the burin in multiple different directions, an expert engraver is able to achieve a natural tile texture on the surface of the fine metal he is working with.

Additionally, the eight pairs of angular protrusions along the ring band are emblematic of the sturdy pillars supporting the Temple of Earth’s elaborate structure. With a high shine mirror finish, they epitomise with a modern flair the Temple of Earth’s strong and unyielding architectural formation. 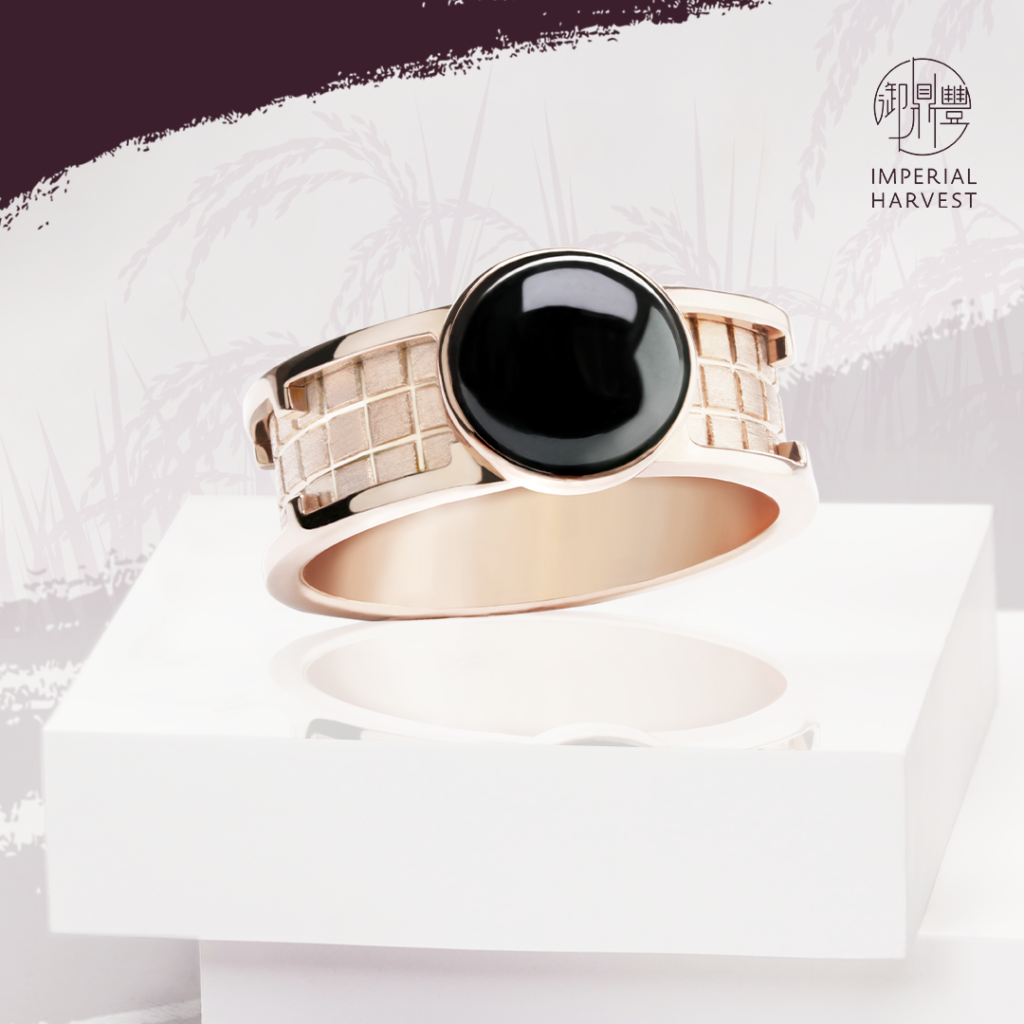 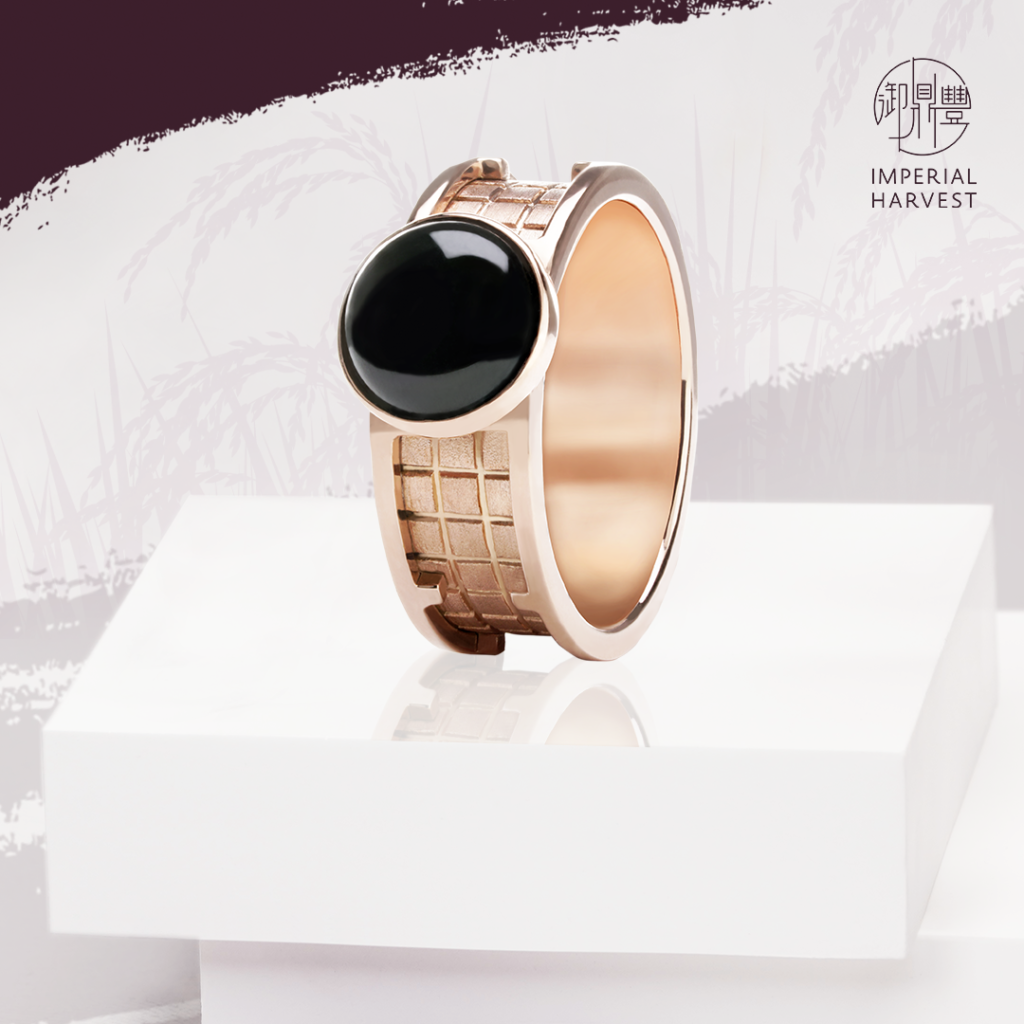 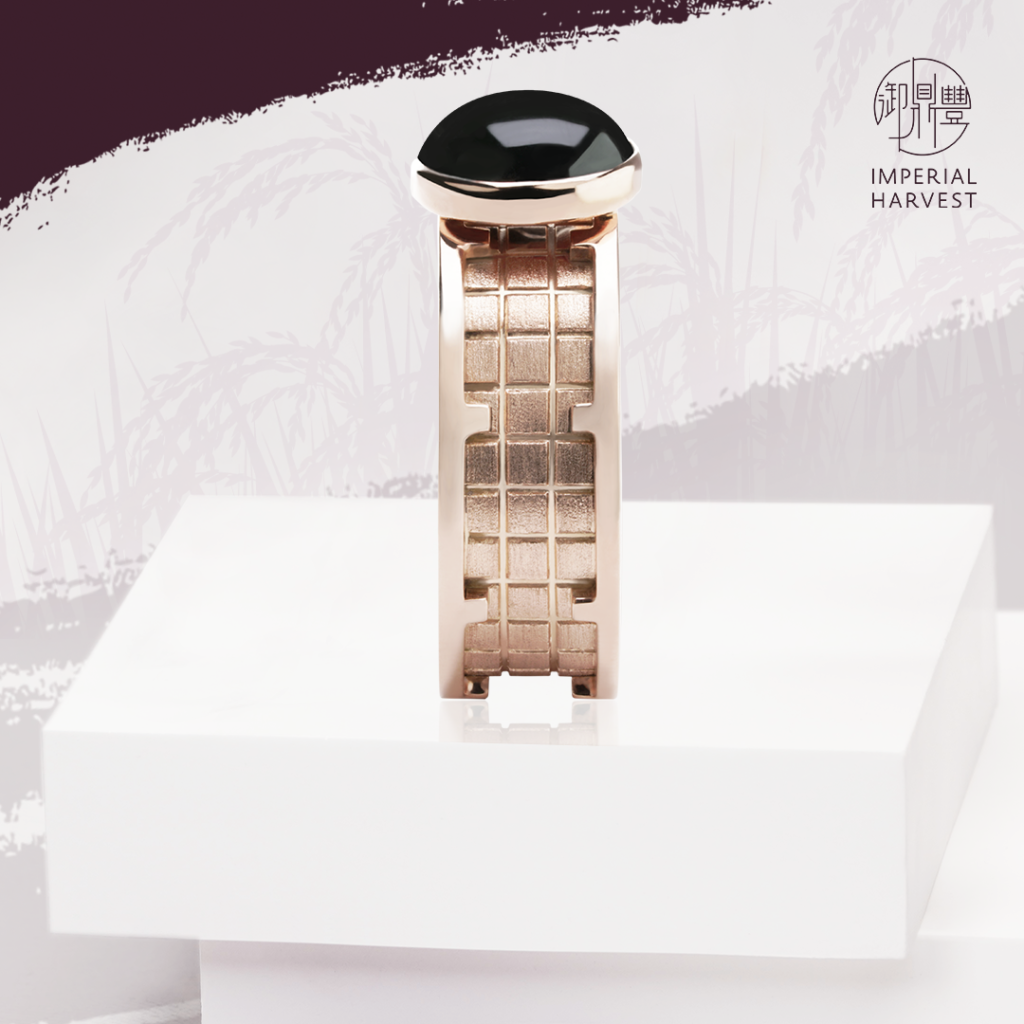 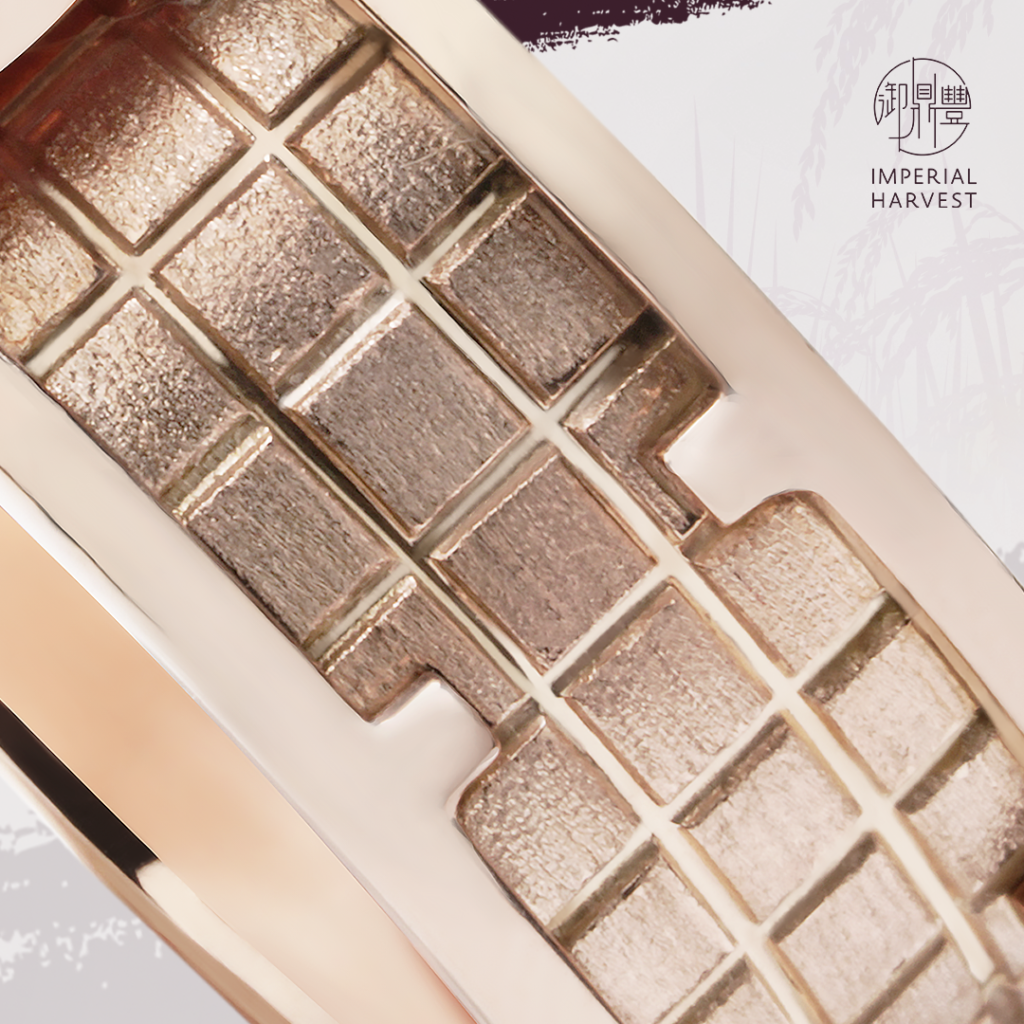 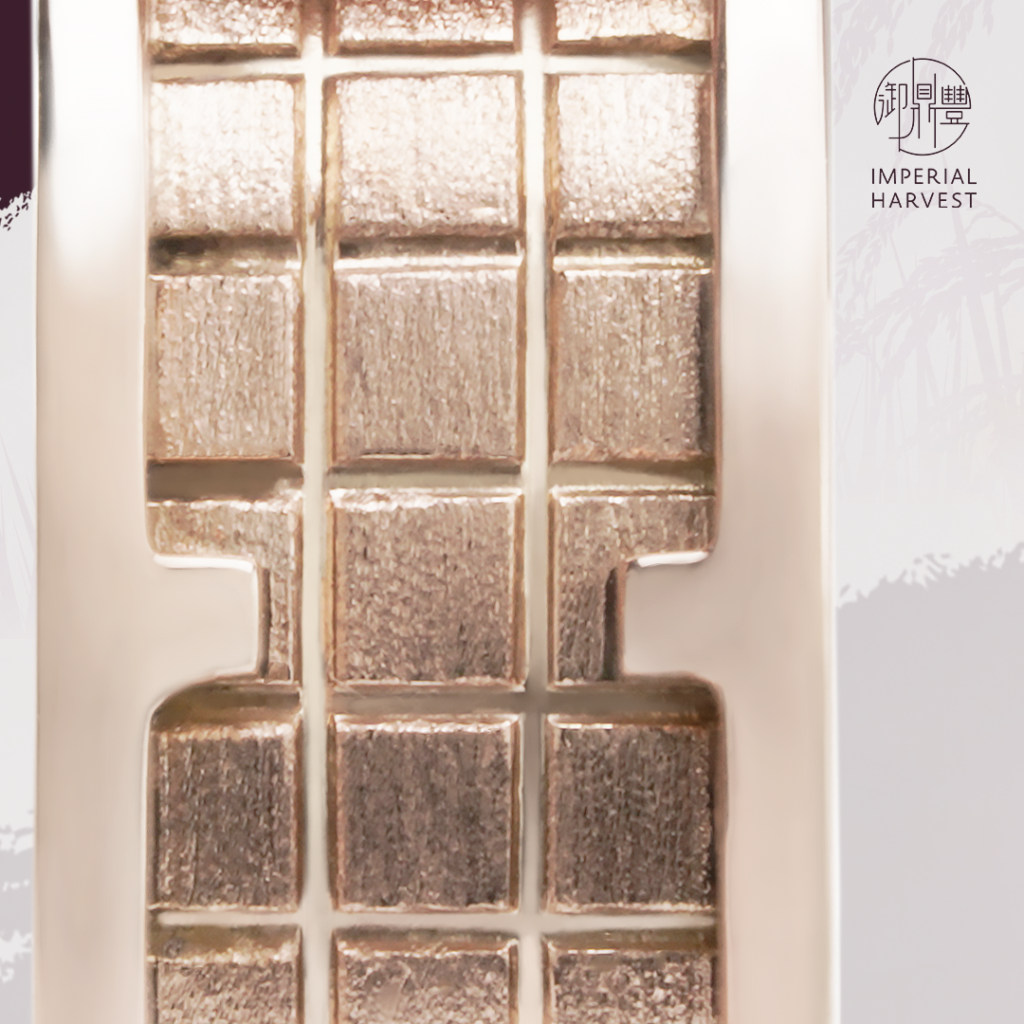