In the practice of Feng Shui, there are mainly two branches, Classical Feng Shui and Imperial Feng Shui.

Imperial Feng Shui, is a highly respected art traditionally reserved only for the Chinese nobility and forms the foundation of Imperial Harvest’s philosophy. On the other hand, Classical Feng Shui focuses on predictions and analysis. It guides individuals to follow through on their predestined Bazi charts.

In this article, we will debunk the top 3 personal Feng Shui myths and explain the authentic practice of Imperial Feng Shui.

Myth 1: You are unable to change your luck

If you are unable to change your luck, then the practice of Feng Shui would be completely redundant. Master David Goh, Singapore’s leading Imperial Feng Shui master, has a clear philosophy behind his practice of Imperial Feng Shui, working alongside his clients to successfully transform their luck and design their destinies.

Mr Chen was a struggling financial adviser earning S$2,000-3,000 a month for the past two years. He consulted two Classical Feng Shui masters and was dismissed as he was going through a bad luck cycle, which resulted in obstacles in his career. However, he soon discovered Imperial Harvest and met Master David. 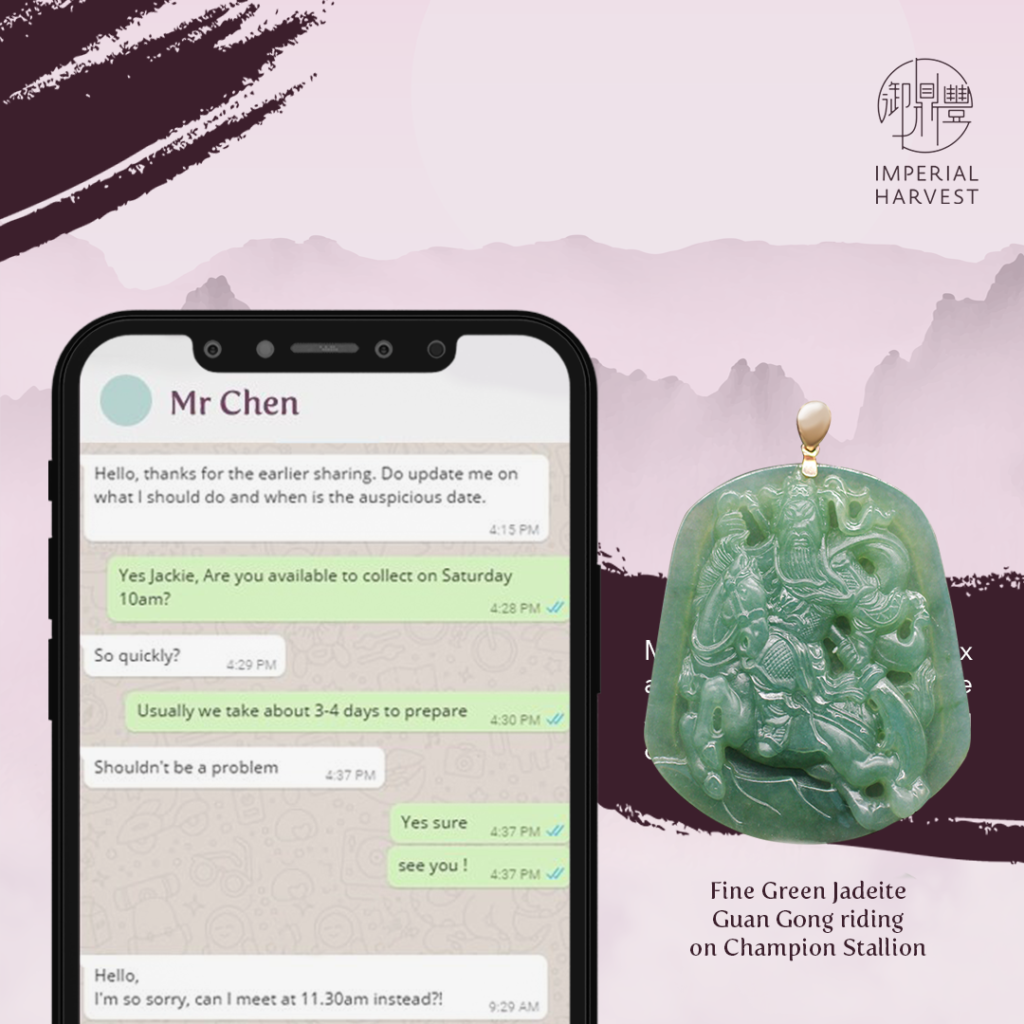 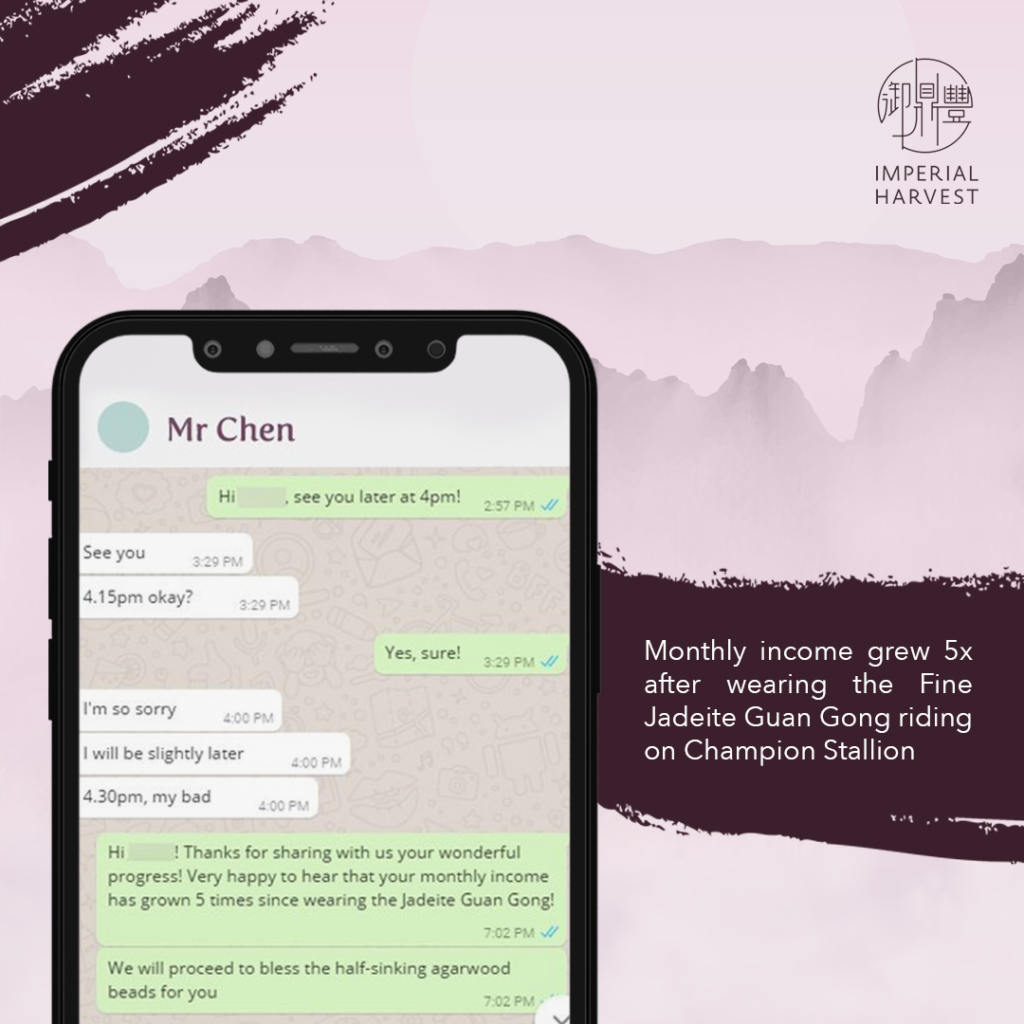 Several months later, Master David conducted a progress review with Mr Chen. During the span of 7 months, Mr Chen’s financial advisory business had thrived and prospered. His monthly commissions grew five folds to S$17,000 despite the weakening economy and the ominous predictions from the Classical Feng Shui masters he had previously consulted.

Myth 2: Personal Feng Shui is about predicting the future

Classical Feng Shui is all about destiny and future predictions which is unhelpful and does little to help us achieve our desired breakthrough success. They usually cause either complacency or powerlessness.

The practice of Imperial Feng Shui empowers the individual to achieve their goals in life.

Scenario 1: “You will have a good and prosperous life ahead of you”

Many people have fallen prey to such predictions and become self-satisfied and complacent. They turn their backs on hard work and give up on their goals. The end result is often a stagnant career with no opportunities of growth or success.

Scenario 2: “You will achieve nothing but failure in life”

On the other hand, Imperial Feng Shui empowers individuals to alter their life’s path to achieve their goals in life, like Miss Waine.

Miss Waine was an ex-engineer who had previously patronised a fortune teller. She was advised that she would be in a bad luck cycle for the next eight years and was dissuaded from pursuing a career in banking and finance.

One day, she chanced upon Imperial Harvest’s Facebook page and decided to book a Bazi consultation with Master David.

After Master David’s analysis of her Bazi chart, she was prescribed the Fine Jadeite Midas Touch to supercharge her career and help her emerge as one of the top bankers in her branch.

Sceptical, Miss Waine laughed it off saying, “I failed my qualifying examinations and have zero sales experience. It would be a miracle if I ever made it to the top. Furthermore, my previous master has said that I am in a bad luck cycle.” 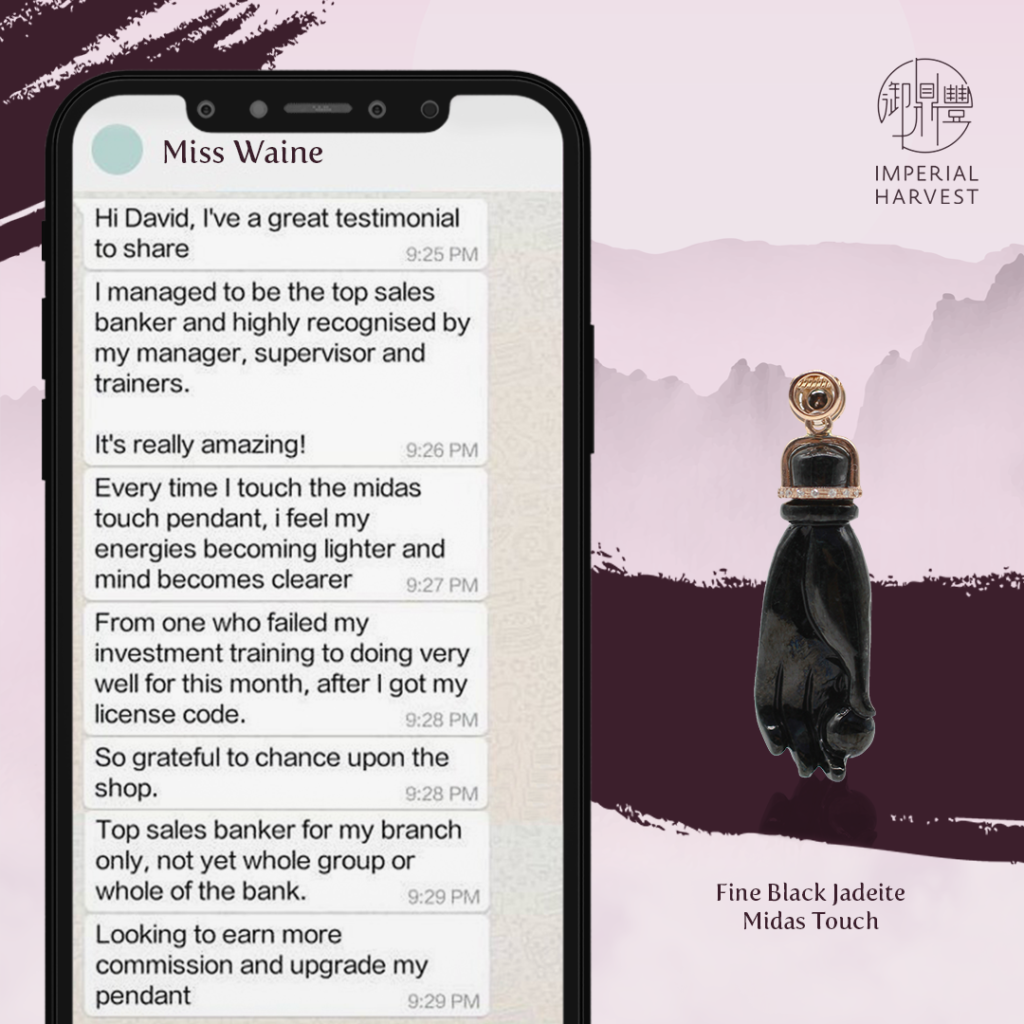 Three months later, Miss Waine had achieved the top sales banker in her branch. This was very much to her surprise given her initial disbelief and lack of confidence. The prescribed Fine Jadeite Midas Touch had unleashed her potential and turned her luck around. As a result, her manager, supervisor, and trainers were all blown away by her stellar performance.

Imperial Feng Shui masters were entrusted with the responsibility of enhancing the authority, power, and well-being of the Chinese emperors. The focus of Imperial Feng Shui is not on predictions and analysis but on shaping destinies. This branch of Feng Shui relies on generations of closely guarded knowledge and the best earthly treasures (Jadeites, Inkstones, Sandalwood, Agarwood, and Crystals).

Imperial Harvest only practises and championes Imperial Feng Shui, and have worked with more than 6,000 clients. Through Imperial Feng Shui, Master David has empowered many individuals to transform their destinies and fulfil their goals and ambitions.

Reviews from our clients 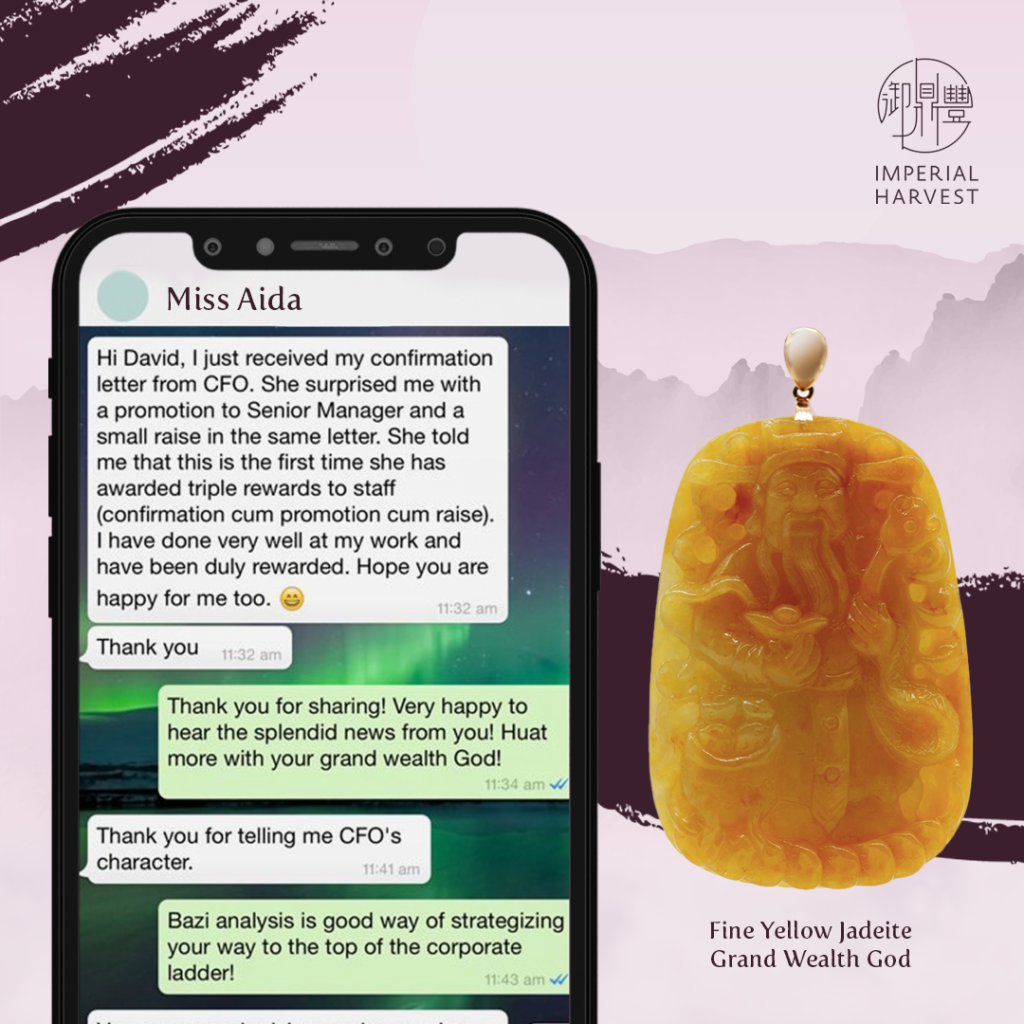 “After wearing the Fine Jadeite Grand Wealth God for 1 month, I secured my confirmation, promotion to senior manager and salary increment, all at once!” – Miss Aida 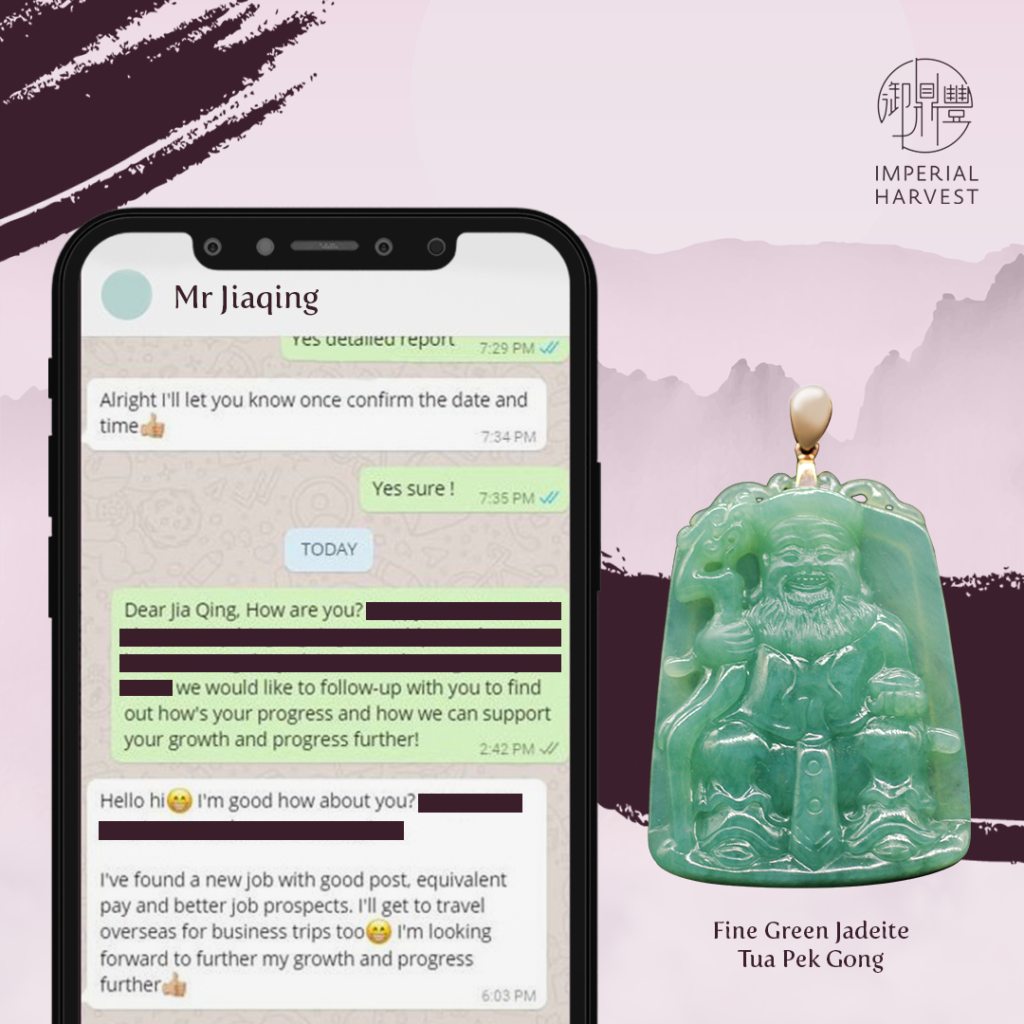 Decoding the science of getting rich – Part 2: Luck

Decoding the science of getting rich – Part 3: Path

Decoding the science of getting rich – Part 4: Authority Star