Posted by Imperial Harvest on 28 January 2021

The Year of the Metal Ox (辛丑) will be a year filled with opportunities, abundance and prosperity. If you are looking to secure a job promotion, attain massive growth and breakthroughs in your business or achieve consistently high returns from your investment portfolio, this will be an important year.

Significance of the Start of Spring (立春)

We will be welcoming the Year of the Metal Ox (辛丑) and bidding farewell to the Year of the Rat on 3 February 2021. The date is significant for a number of reasons, not the least because it marks the Start of Spring or Lichun (立春) – the exact midpoint between the Winter Solstice and the Spring Equinox.

For centuries, the emperors of ancient China would faithfully observe these festivals and the time-honoured rites and rituals of the Imperial Court. 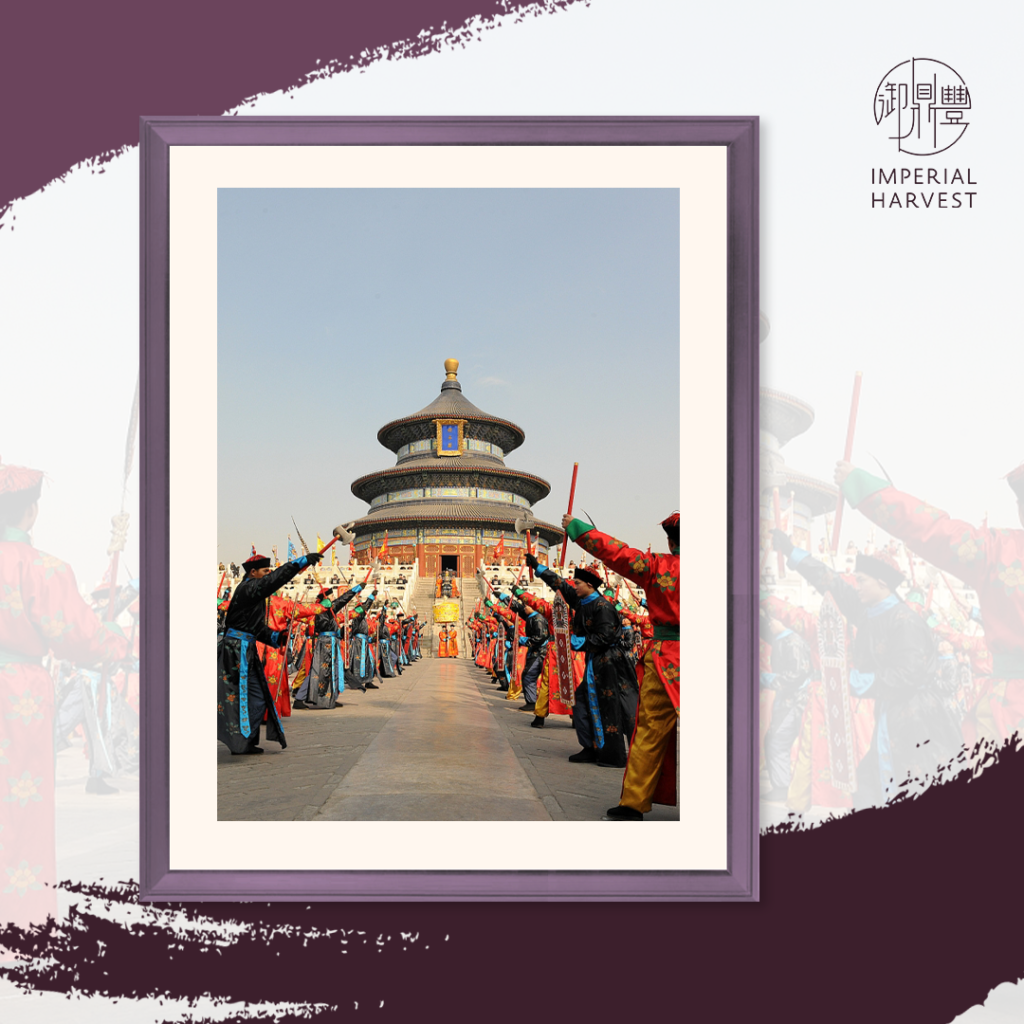 As part of his responsibilities, each emperor would conduct three ceremonies every year at the Temple of Heaven to pray for the prosperity of the people.

The first ceremony would commence on the first Xin day stem of the first lunar month (正月上辛日). Here, the emperor would pray for an abundant yield at the Hall of Prayer for Good Harvests in the Temple of Heaven.

The second ceremony would take place during the Summer Solstice. This time, the emperor would pray for rain at the Circular Mound Altar.

The final ceremony was the worship of Heaven, held during the Winter Solstice. This was to thank the Heaven for a good harvest that year. It was believed that even the smallest mistake could bring bad luck to the empire, so everything had to be perfect.

Among the three ceremonies that graced the Temple of Heaven every year, the first ceremony was the most important as it sowed the seed of prosperity. It was said that a good start is half the battle won.

In modern context, this will be the best time of the year to equip and empower yourself with Imperial Harvest treasures in order to achieve results and breakthroughs in your career, business, sales, investment, relationship and wealth.

In this article, Master David personally recommends the most emblematic and iconic Imperial Harvest collections. 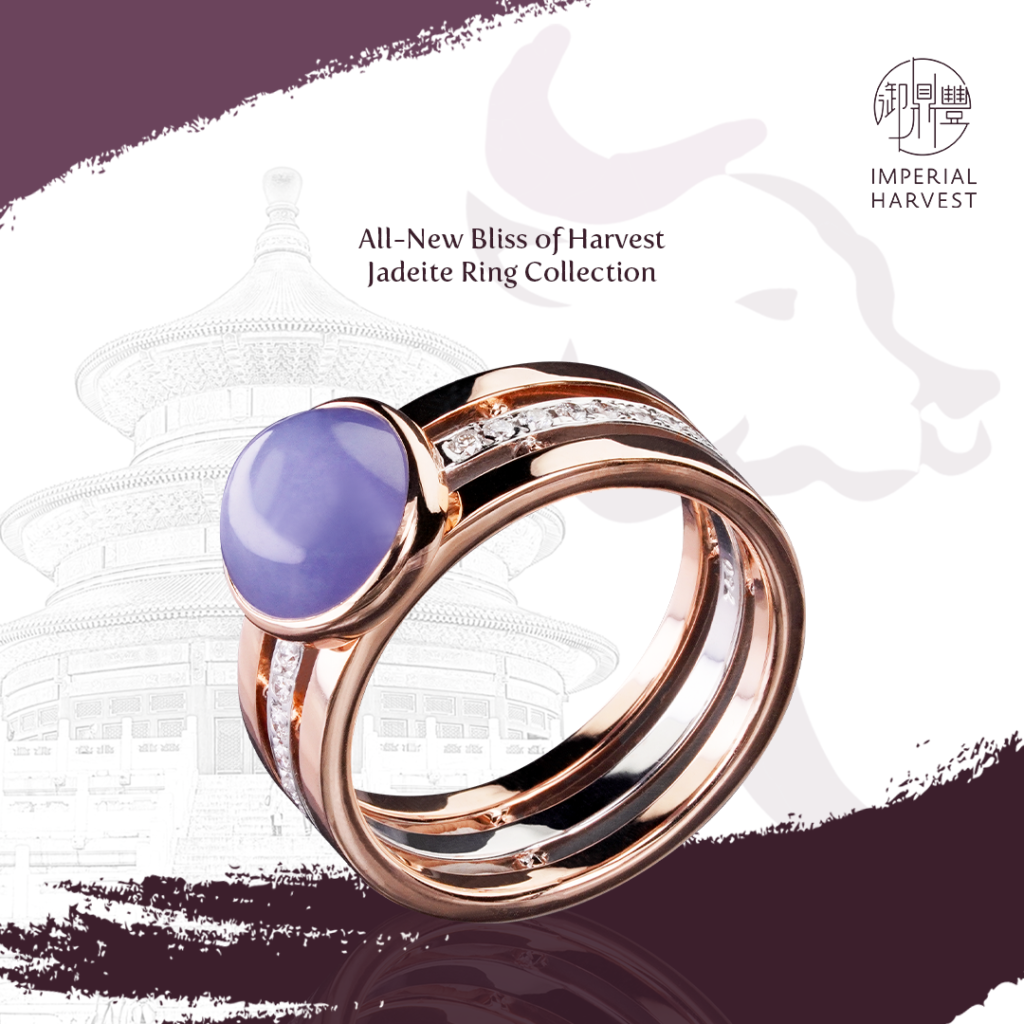 The newest generation of Bliss of Harvest rings pays homage to the famous Hall of Prayer for Good Harvests in the Temple of Heaven, commemorating 600 years since its completion.

These lustrous 18K solid rose gold rings are created from a proprietary blend of pure gold, copper and silver, symbolising heaven, earth and human elements respectively. They draw inspiration from the building’s three-tiered roof, which also represents the cosmic trinity of Heaven, Earth and Human luck. 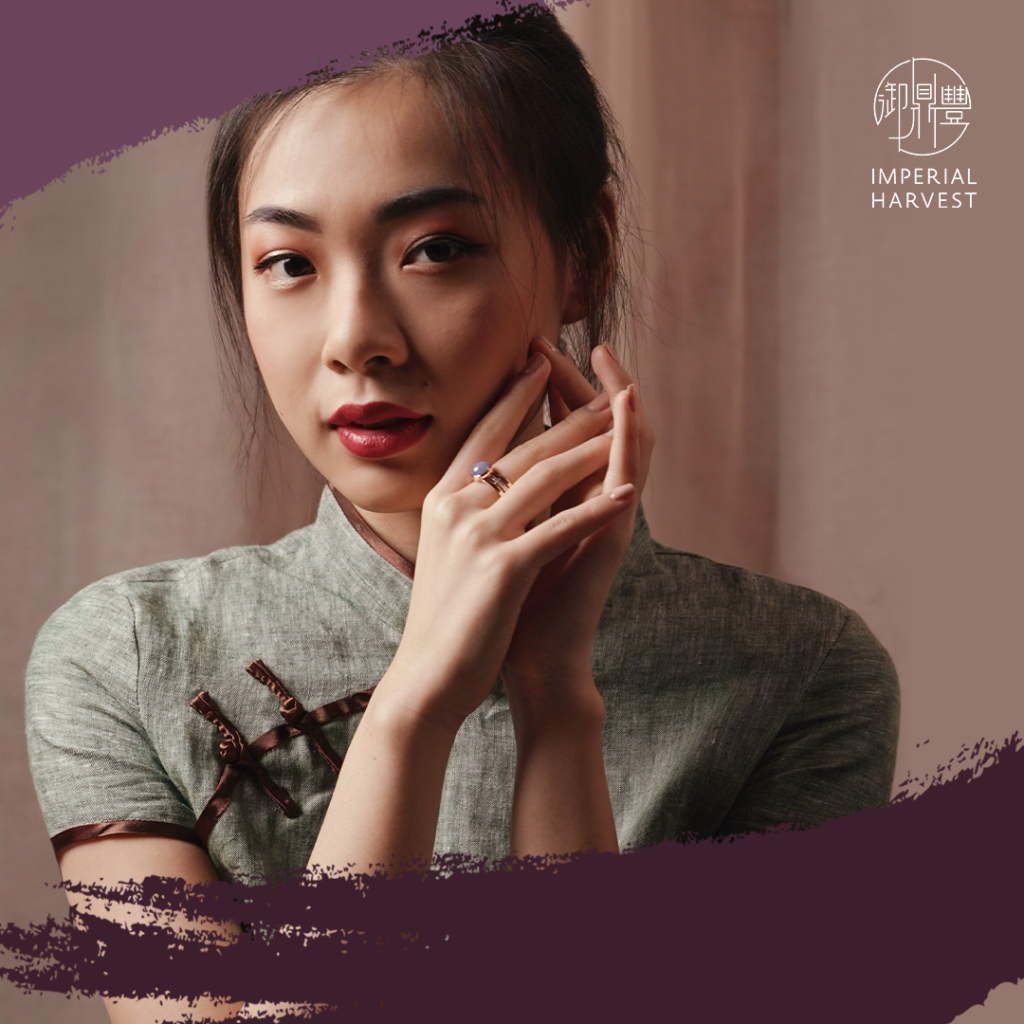 The beautiful hue intensifies with age and evokes the vibrant red found throughout the imperial temple – a colour deeply synonymous with prosperity and auspiciousness.

Each Bliss of Harvest ring is also embellished with a perfectly rounded and glistening jadeite cabochon, which resembles the gilded orb that crowns the Hall of Prayer. It takes hours of finely honed craftsmanship to harvest the cabochon from a jadeite boulder, shaping it to perfection and hand-polishing the gem to bring out its natural depth of colour. 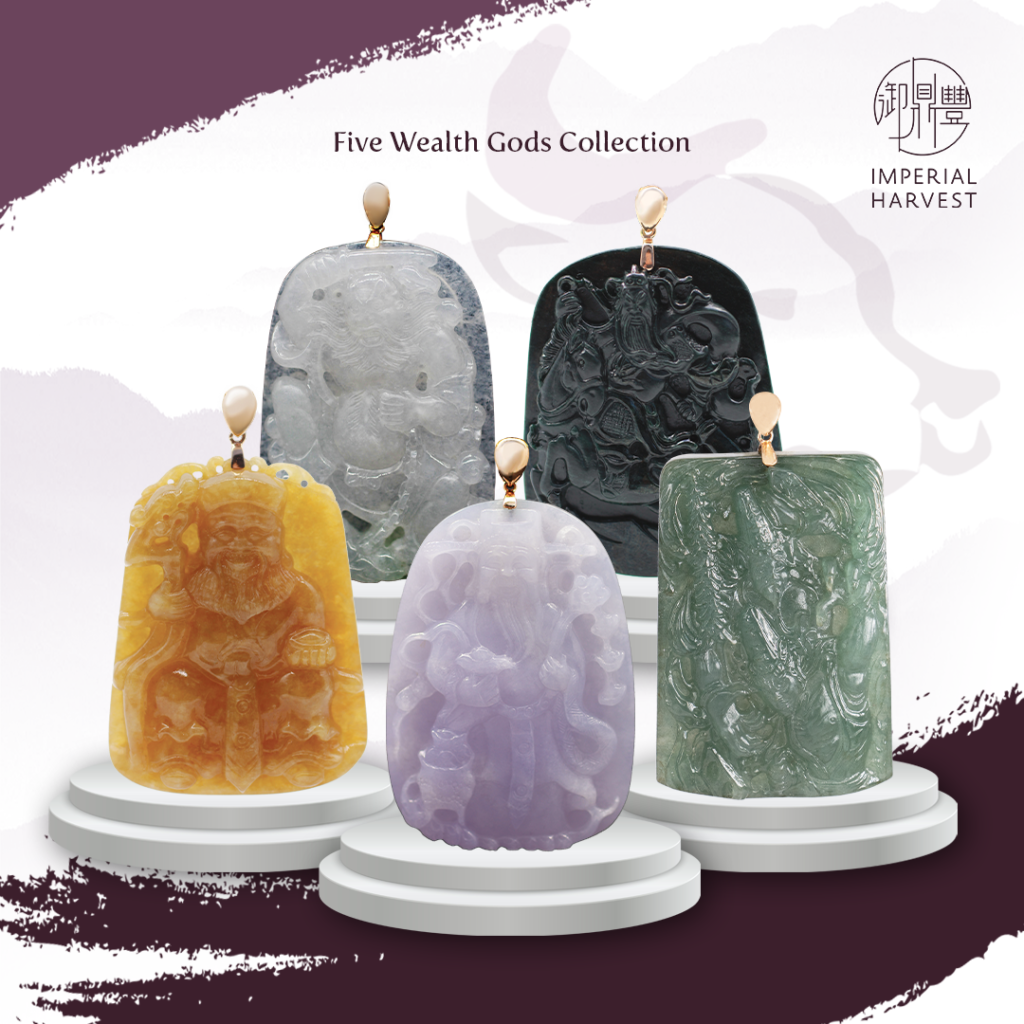 In Chinese history, there are Five Wealth Gods, each overseeing a specific arena of wealth: career, business, investment, trading and windfall.

Being the most powerful manifestations of auspicious luck in Chinese culture, the Five Wealth Gods are an essential collection for anyone looking for rapid success and breakthroughs in their lives. 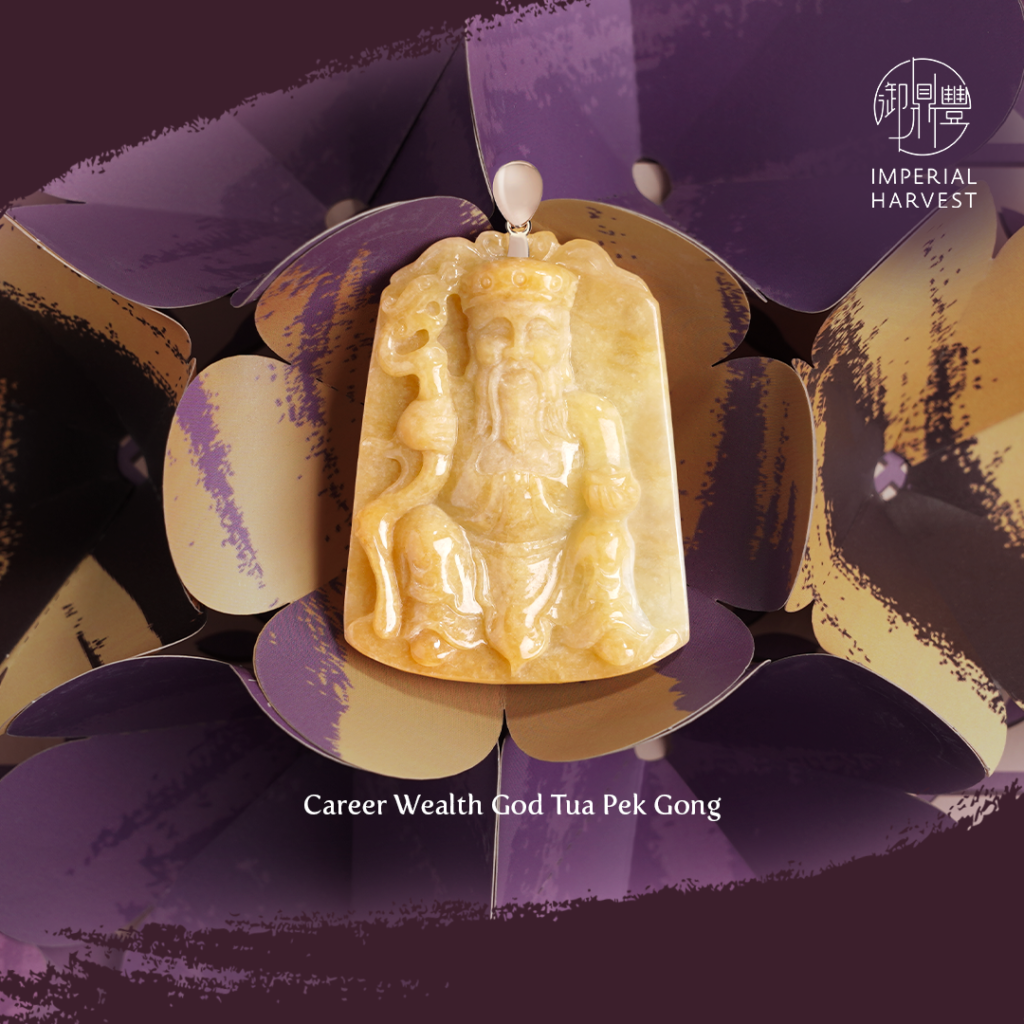 Tua Pek Gong is widely worshipped as the Career God of Wealth, otherwise known as 福德正神 (Fu De Zheng Shen). According to legend, Zhang Fu De was a top government official during the Zhou Dynasty. He was in charge of taxation, a position similar to the Minister of Finance in modern times.

Given his stature, he is never seen without his trusty dragon scepter (玉龙杖), which helps to eliminate corporate competitors and command the support of benefactors. In the other hand, he holds the gold ingot – a magnet for high-quality career opportunities and significant salary increments. He also wears a jade belt, symbolising power and authority. 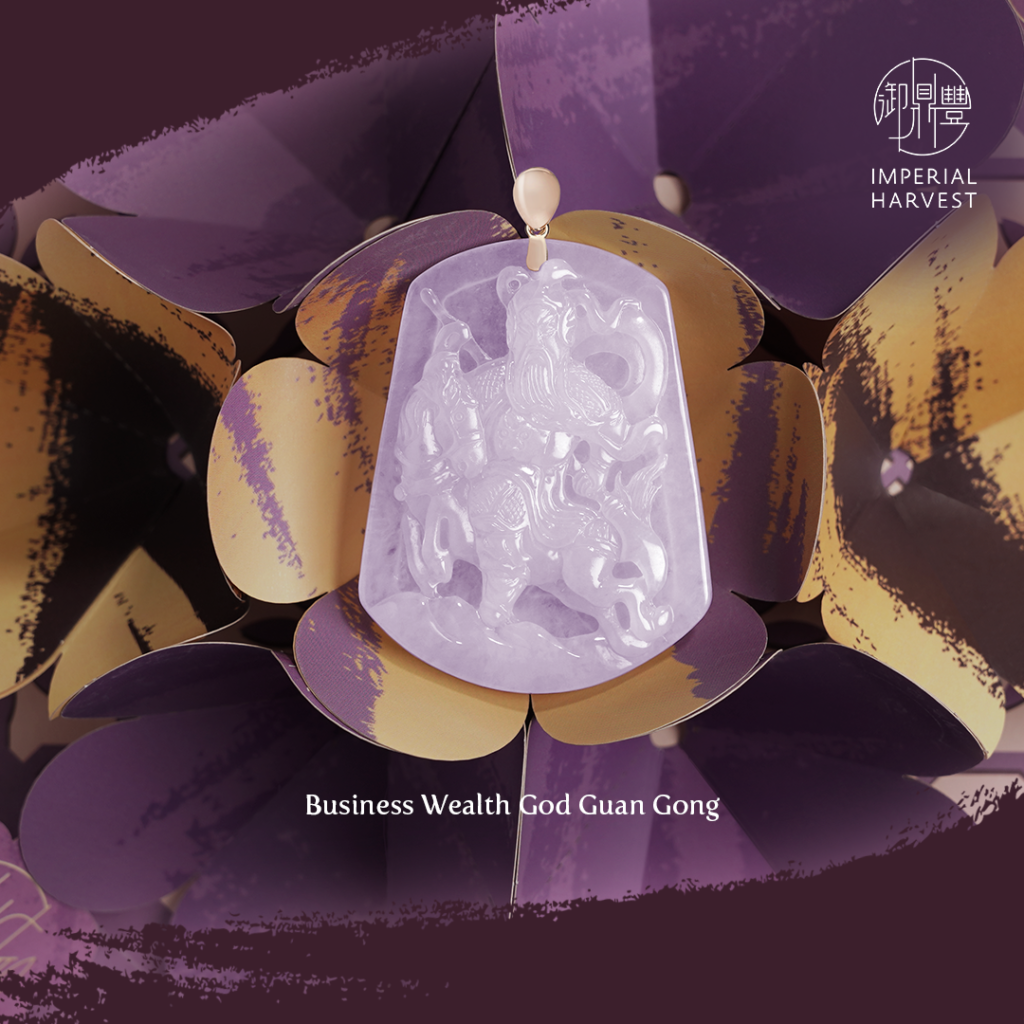 Guan Gong was a general serving under a famous warlord Liubei (劉備) towards the end of the Eastern Han Dynasty, known for his undying conviction to restore the glory of the Han Dynasty.

A symbol of unity and loyalty, Guan Gong has emboldened countless business owners to be charismatic leaders and inspired them to nurture their ventures. Sales professionals have also attested to its ability to help them build a closer relationship with their prospects and expand their professional networks.

The powers of Guan Gong are magnified by the Champion Stallion (千里马), which enables businesses and networks to grow by a thousand miles per day (一日千里).

Similarly, the Green Dragon Sabre (青龙偃月刀), which is the sword that Guan Gong wields, enables business owners and sales professionals to eliminate stiff competition and obstacles to emerge victorious in the closing of every sale. 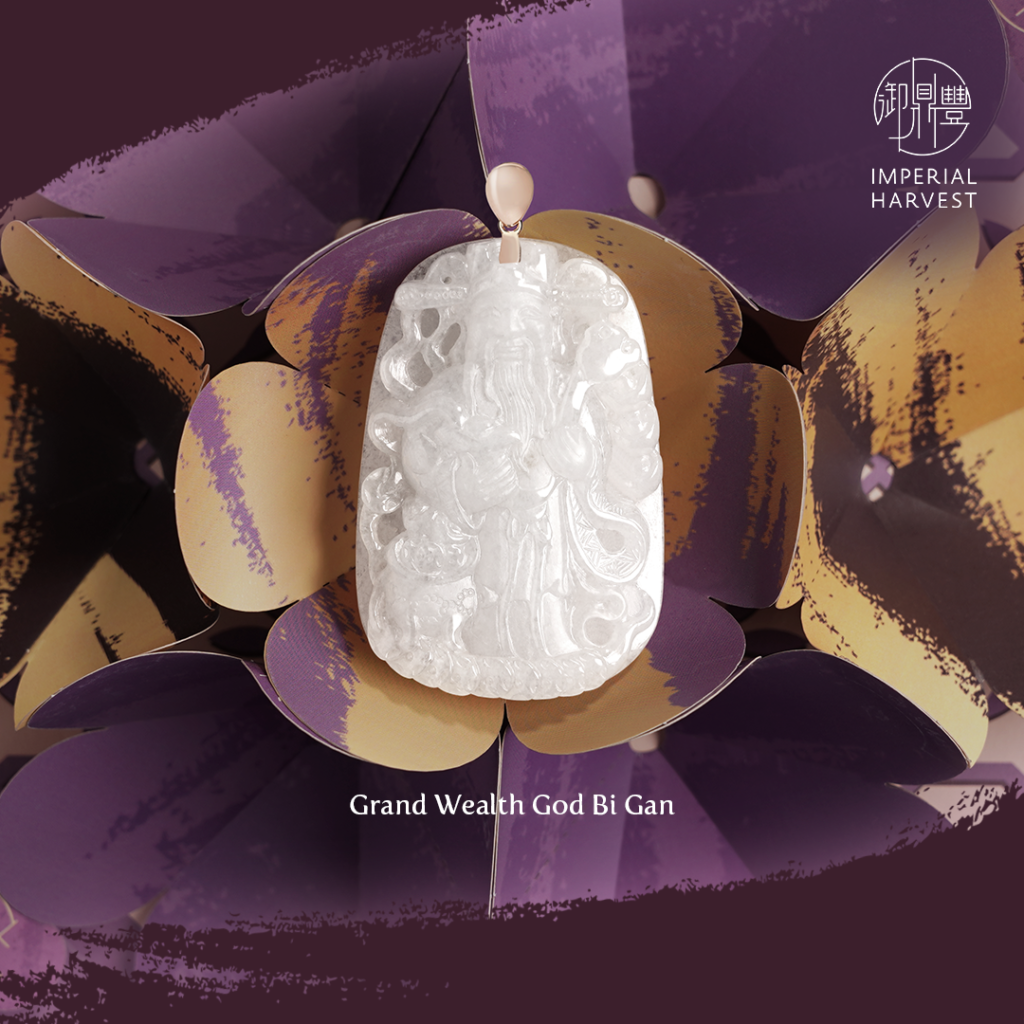 He is depicted here with the three most powerful weapons in the growth and accumulation of wealth: the ruyi scepter, the gold ingot and the treasure trove with gold ingots. Combined, they make Grand Wealth God the most supreme manifestation of all wealth gods.

Those who have the Grand Wealth God in possession can look forward to securing influential positions in their careers, reaching new heights in their salaries, earning record-breaking sales, scoring massive windfalls and achieving enviable returns on their financial portfolio. 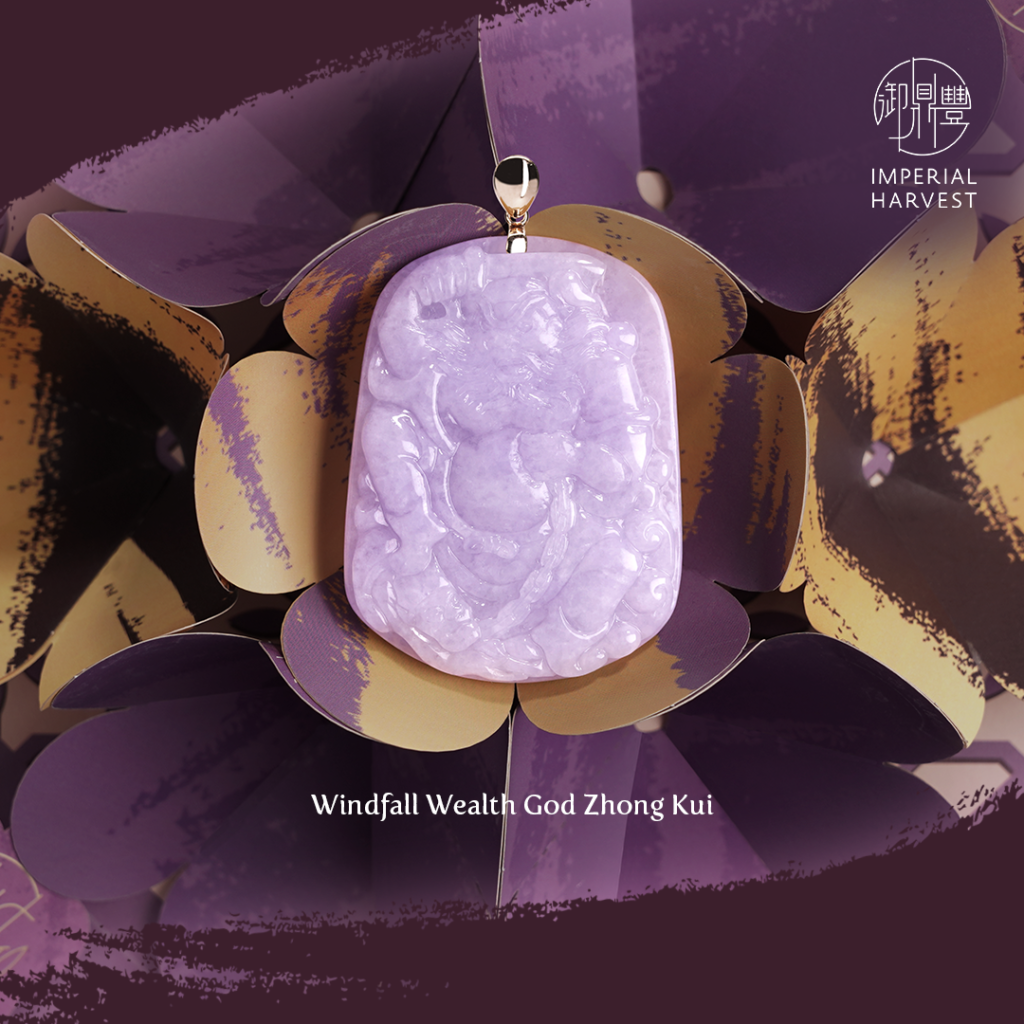 Zhong Kui is widely worshipped as the Windfall God of Wealth – ideal for those who are looking for massive breakthroughs in their financial portfolio, accumulation of financial assets and removal of malefactors.

The definition of windfall or indirect wealth (偏财) refers to an unexpected source of income. The windfall income is generally sizable and 10-100 times larger than your monthly income.

To make the aforementioned a reality, we have incorporated a number of powerful wealth-fetching features, namely the Five Wealth Goblins, the Wealth Commanding Sword and the Wealth Fetching Chain. 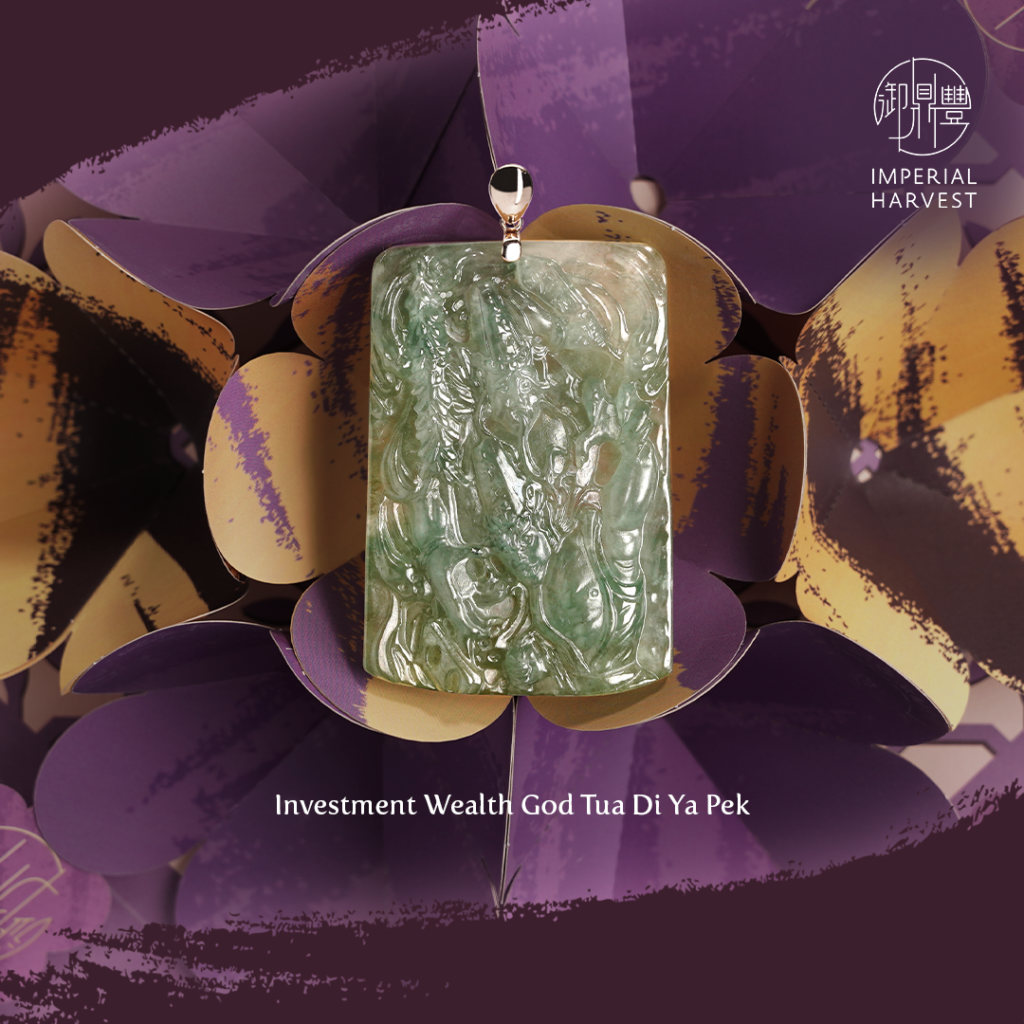 As its name suggests, the Investment Wealth God is used by our clients working in top proprietary trading companies and investment management companies and welcomed by those who are pursuing breakthroughs in their investments.

Tua Di Ya Pek actually consists of Di Ya Pek in the foreground and Tua Ya Pek in the background. The former empowers you to enjoy consistent and long-term growth of your financial portfolio, while the latter delivers short- to mid-term gains.

Direct wealth capacity is defined as the income potential we derive from our career, business, sales and other regular sources of income.

On the other hand, indirect wealth capacity refers to the income potential we derive from our investment, trading and other secondary sources of income. 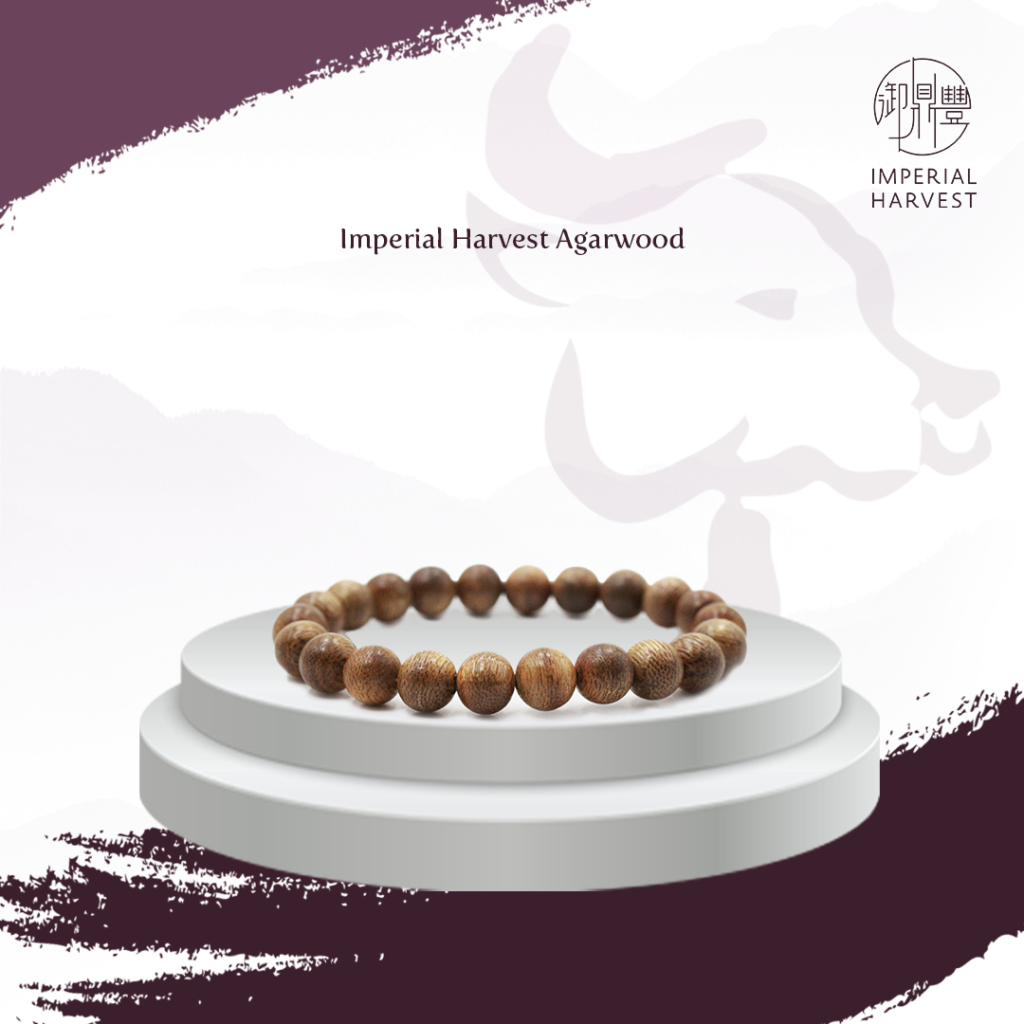 If you are looking to expand your direct wealth capacity, the Imperial Harvest Agarwood collection is a dependable choice. 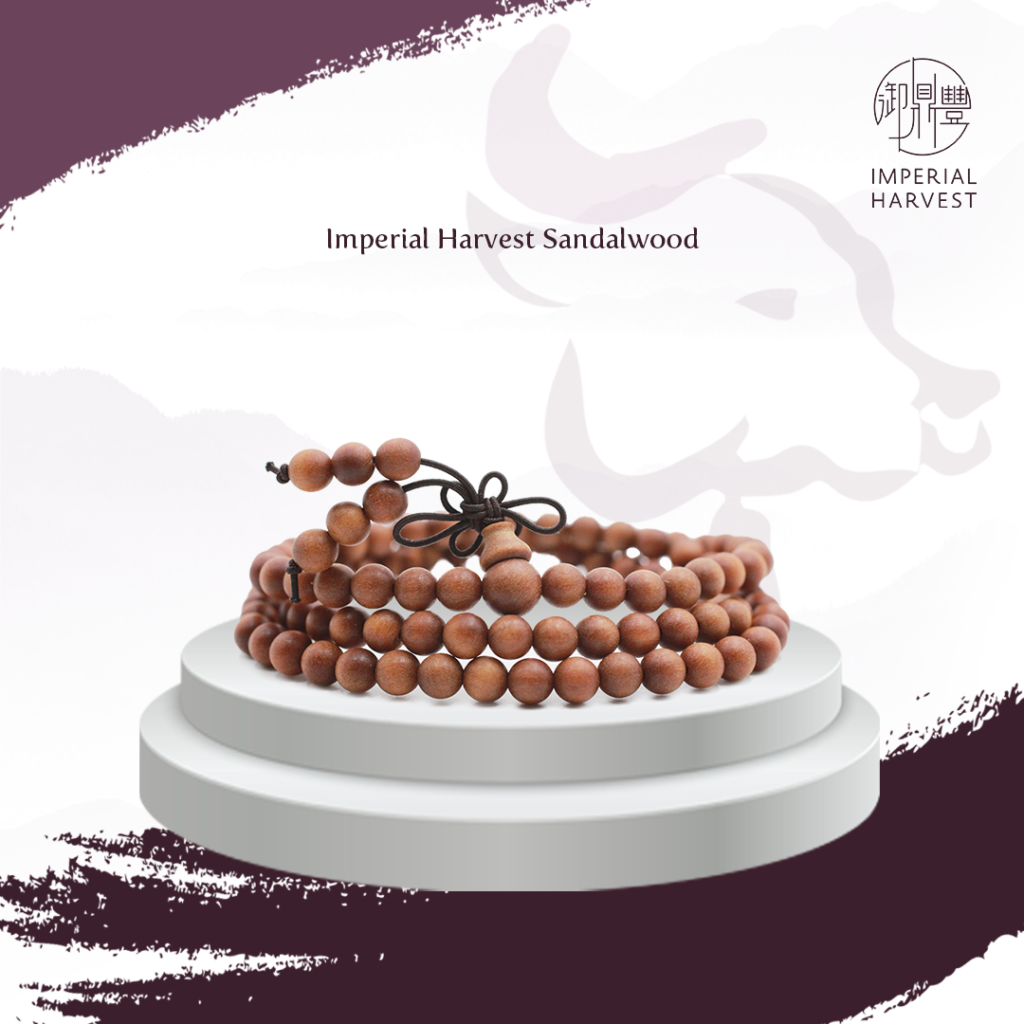 The Imperial Harvest Sandalwood collection, on the other hand, is ideal for those looking to boost their indirect wealth capacity – perfect if you are investing or trading on the side.