Posted by Imperial Harvest on 20 January 2023

Tua Di Ya Pek (大偏财神 or 大二爷伯) is a hugely popular deity in Chinese tradition, particularly among many Buddhists and Taoists. As an important indirect wealth god in Chinese folk religions, Tua Di Ya Pek is heavily sought after by adherents for supplementary sources of wealth, beyond their core occupation. Tua Di Ya Pek specialises in governing indirect wealth creation tools such as stocks and trading, and is therefore commonly referred to as the Investment Wealth God. In this capacity, Tua Di Ya Pek empowers devotees with inspired investment decisions to achieve the desires of their dreams.

The history behind Tua Di Ya Pek

Tua Di Ya Pek, in the form he is known today, is in fact an amalgamation of two distinct important figures in Chinese folk history — Tua Ya Pek and Di Ya Pek. They were constables in a yamen (衙门), or prison, in ancient China, routinely carrying out administrative tasks such as tending to prisoners and coordinating with court officials. 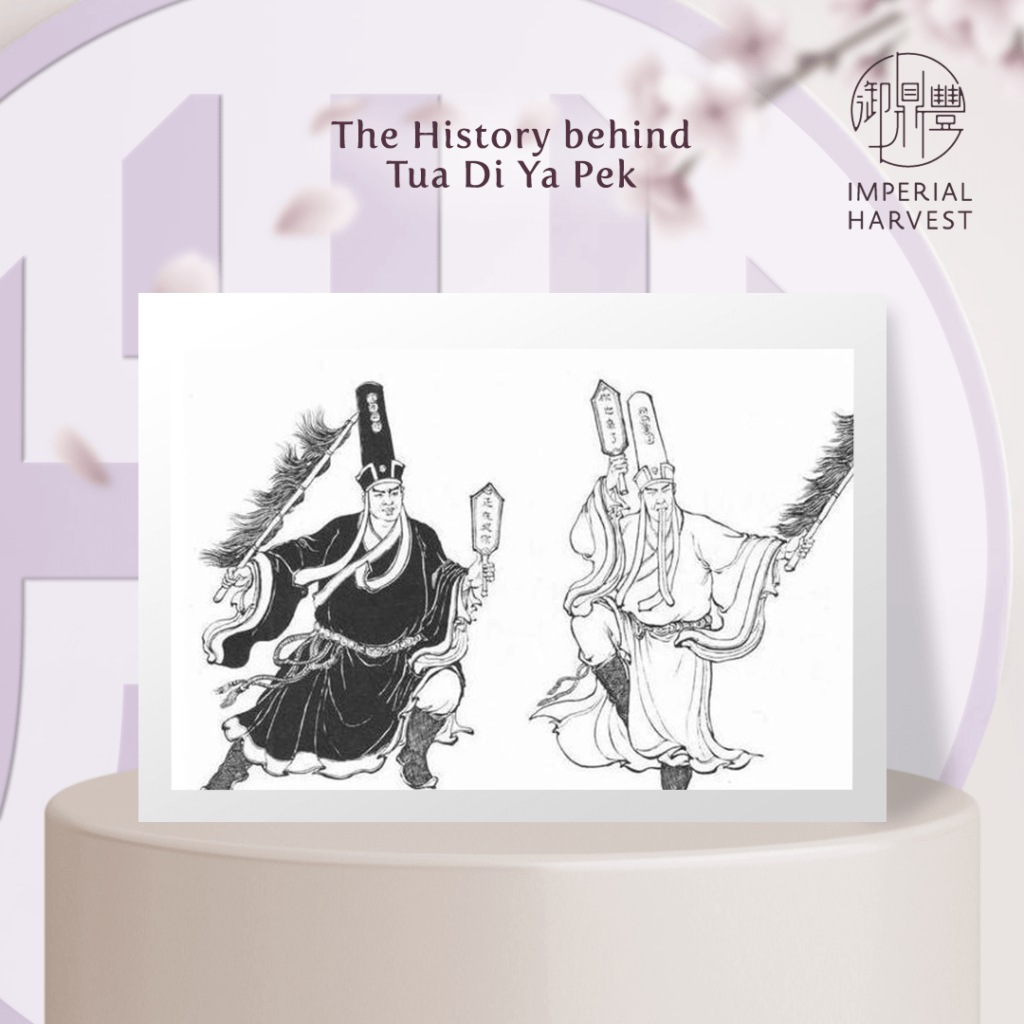 One fateful day, despite the constables’ meticulous work, a prisoner they were escorting escaped in transit. This was a serious lapse for Tua Ya Pek and Di Ya Pek, as they had always exercised the utmost care in carrying out their duties. Naturally, they were horrified by the thought of their actions causing a mishandled mission. Devising a plan to locate the prisoner and bring him back into custody, the two constables agreed to split up and gather later at a designated location under a bridge. With that, the search swiftly got underway.

Tragically, it was on this fateful mission that disaster struck. Soon after the commencement of the search, the surroundings were drenched in a torrential downpour. The ground quickly became slick and waterlogged, and visibility dropped dangerously low. Rivers and streams swelled beyond bursting point and discharged excess rainwater beyond their banks, contributing further to the treacherous flooding conditions. Indeed, the full fury of the heavens was unleashed squarely upon the area where Tua Ya Pek and Di Ya Pek were carrying out the manhunt.

Ordinarily, such hazardous conditions would have triggered the suspension of such outdoor missions, especially through thick vegetation and unfamiliar terrain. However, the two constables were desperate to locate and recapture the missing prisoner, especially as they felt directly responsible for his escape. As their sense of duty got the better of them, they decided to press on with the search — alas, in what was to be their final mission. Amidst the strong winds and overwhelming deluge, the constables struggled to see more than a few inches ahead of them, and became disoriented amidst the thick foliage. When they failed to report back to the yamen as slated, officials feared the worst — and indeed their bodies were discovered in a bloated river shortly after the passage of the storm.

In recognition of the constables’ admirable commitment to their cause, the Jade Emperor was determined to ensure that their noble sacrifice was not in vain. Just as they had toiled alongside each other as constables, they were reunited in the afterlife and deified collectively as Tua Di Ya Pek. Long after their physical passing on earth, Tua Ya Pek and Di Ya Pek live on in the hearts and minds of their devotees, continuing to play an active role in contemporary society.

Today, Tua Di Ya Pek empowers devotees with a keen eye for winning opportunities that generate explosive returns, along with auspicious indirect wealth luck in their pursuit of financial windfalls. Furthermore, in paying their respects to this powerful investment wealth god, devotees faithfully commemorate the very qualities that defined Tua Ya Pek and Di Ya Pek during their dedicated service on earth.

Within the Sangang Wuchang (三纲五常) framework so highly revered in Confucian doctrine, Tua Di Ya Pek firmly aligns with the virtue of righteousness (义). According to the Sangang Wuchang, which acts as a de facto code of conduct in many East Asian societies, righteousness guides one towards the unconditional rejection of immoral or otherwise questionable practices. A strong sense of righteousness, therefore, empowers one to faithfully espouse the values and practices one subscribes to, even in the face of strong resistance. 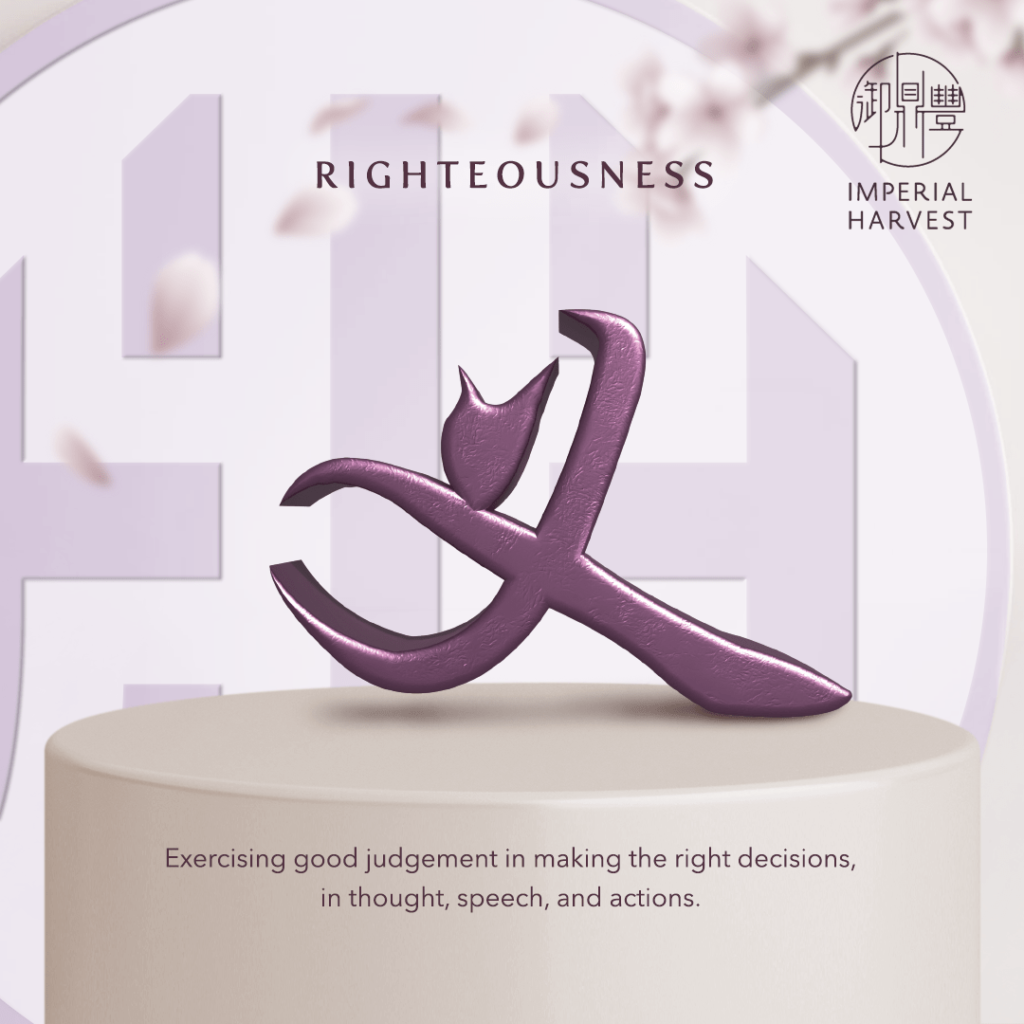 The value of righteousness also encompasses a clear distinction between right and wrong, guided by prevailing social norms. Living a life of righteousness entails being astutely perceptive of what actions are deemed acceptable or otherwise, and actively taking measures to steer clear of undesirable behaviour. To do so in spite of conflicting pressures requires a well-oiled moral compass, one which compels the steadfast pursuit of justice and morality. Particularly among the Chinese diaspora, righteousness is today, inextricably linked to such cherished values as loyalty, filial piety and integrity.

Indeed, the legend of Tua Ya Pek and Di Ya Pek exemplifies the notion of righteousness that was held in such high regard in society. In the midst of the gusty winds and the rain’s relentless assault, they would have been justified in calling off the search for the escaped prisoner and retreating to safety. Instead, driven by their devotion to the cause they had committed their lives to, the constables remained diligent in their assigned tasks, persisting with the search even at the greatest personal cost. Their actions manifest the deeply ingrained sense of duty that lives on today, cherished and passed down from generation to generation.

Resolutely guided by the legends of ancient Chinese history, Imperial Harvest has always been inspired by the heroism of figures such as Tua Ya Pek and Di Ya Pek. Manifesting in a myriad of earthly treasures across the Imperial Harvest collection, the deified Tua Di Ya Pek has accompanied scores of blessed clients through their endeavours, empowering them to leverage their unlimited human potential to grow from strength to strength. 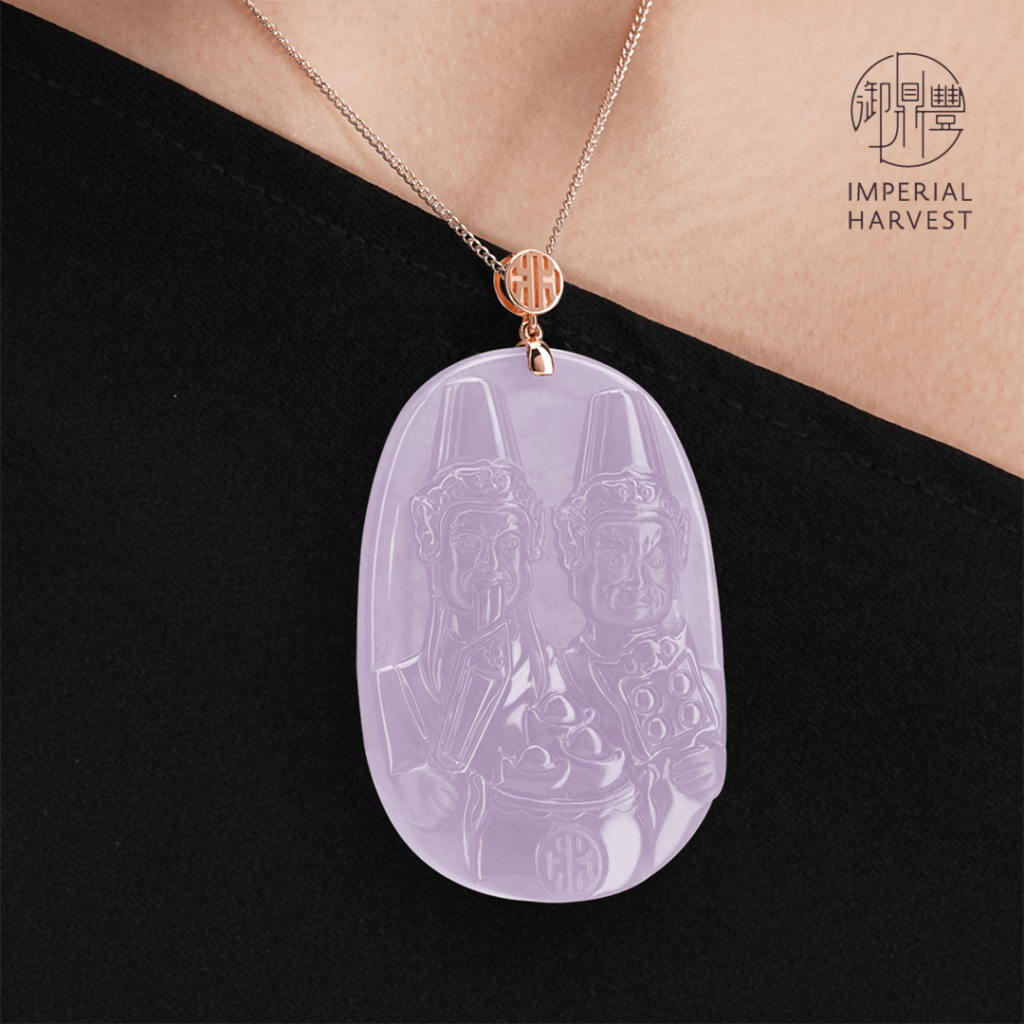 Conceptualised and designed by Master David, this latest iteration depicts Tua Di Ya Pek reprising his rightful role as one of the most revered wealth gods in the Chinese pantheon. Tua Ya Pek and Di Ya Pek each grasp a Ling Pai, or Chinese token of authority, in their hands. 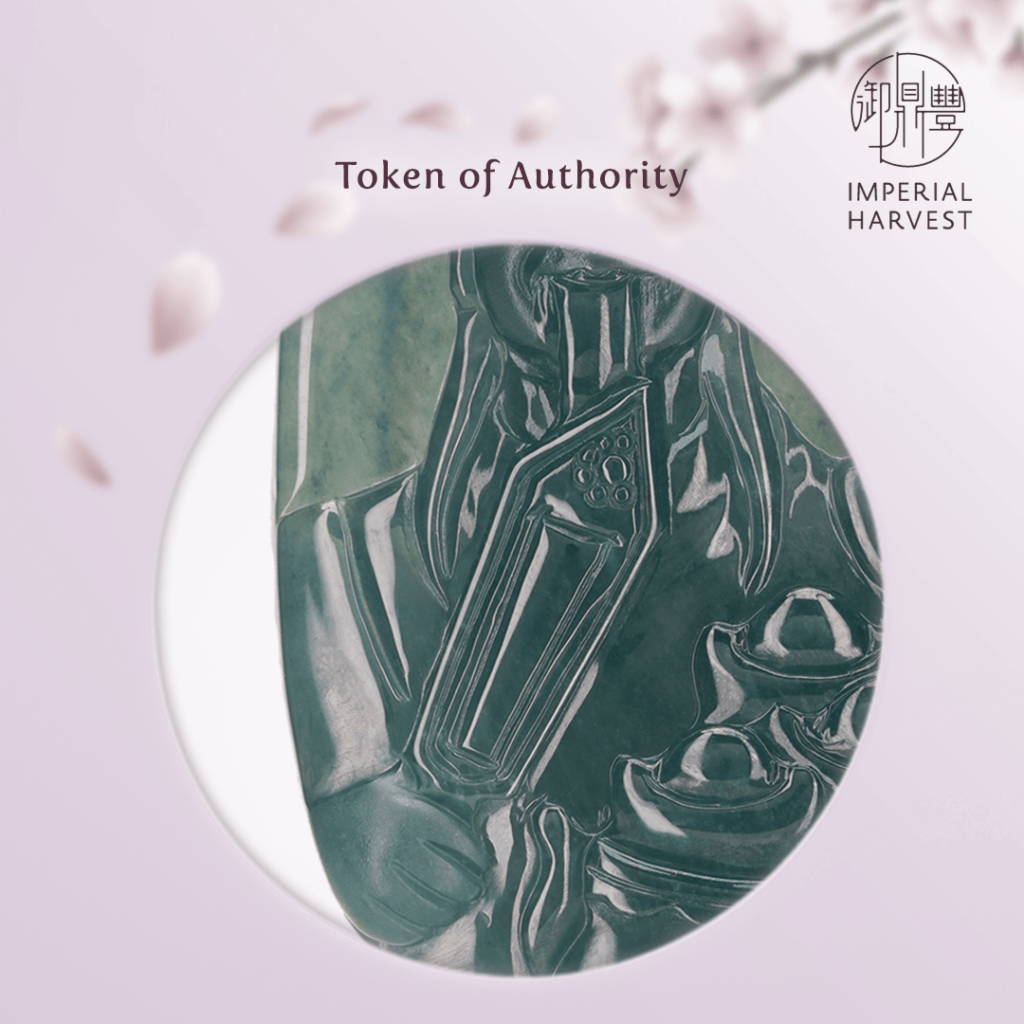 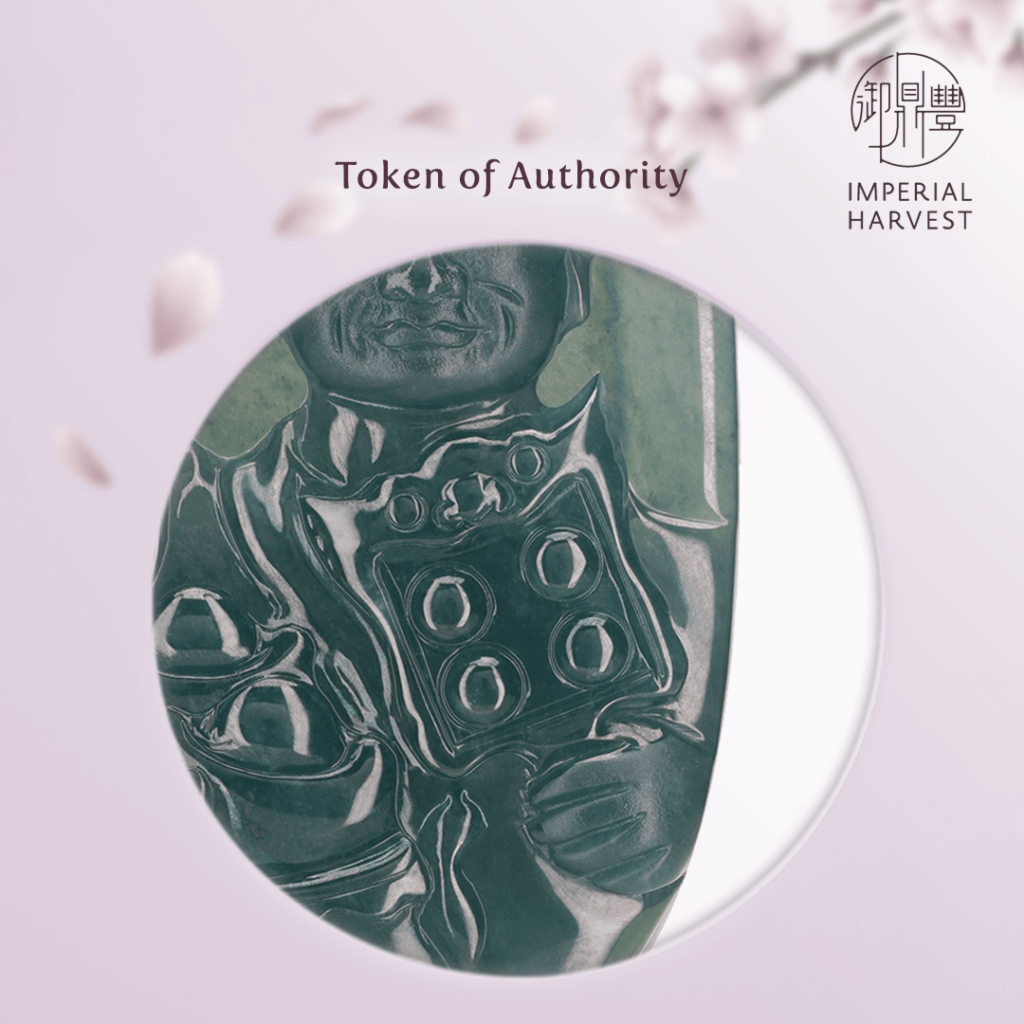 This acclaimed metaphysical tool facilitates the bridging of the mortal realm and the celestial domain which Tua Di Ya Pek inhabits. In aiding the strengthening of the bond between humans and the divine, these powerful accessories enable Tua Di Ya Pek to better perceive the needs and concerns of devotees. This facilitates the effective performance of his calling as Investment Wealth God — empowering the modern ambitious devotee with impeccable foresight and indirect wealth luck to command lucrative dividends in their investment endeavours.

Positioned directly in front of Tua Di Ya Pek, three gold ingots form the centrepiece of this fine Imperial Harvest jadeite treasure. Visually and ideologically, they epitomise the universal Chinese well-wishes of 招财进宝 (zhao cai jin bao), or an influx of prosperity. True to Tua Di Ya Pek’s status as a powerful indirect wealth god, such a bounty is likely to present to devotees as supplementary revenue, as they seek to expand their nest egg and pursue financial freedom in the long run. 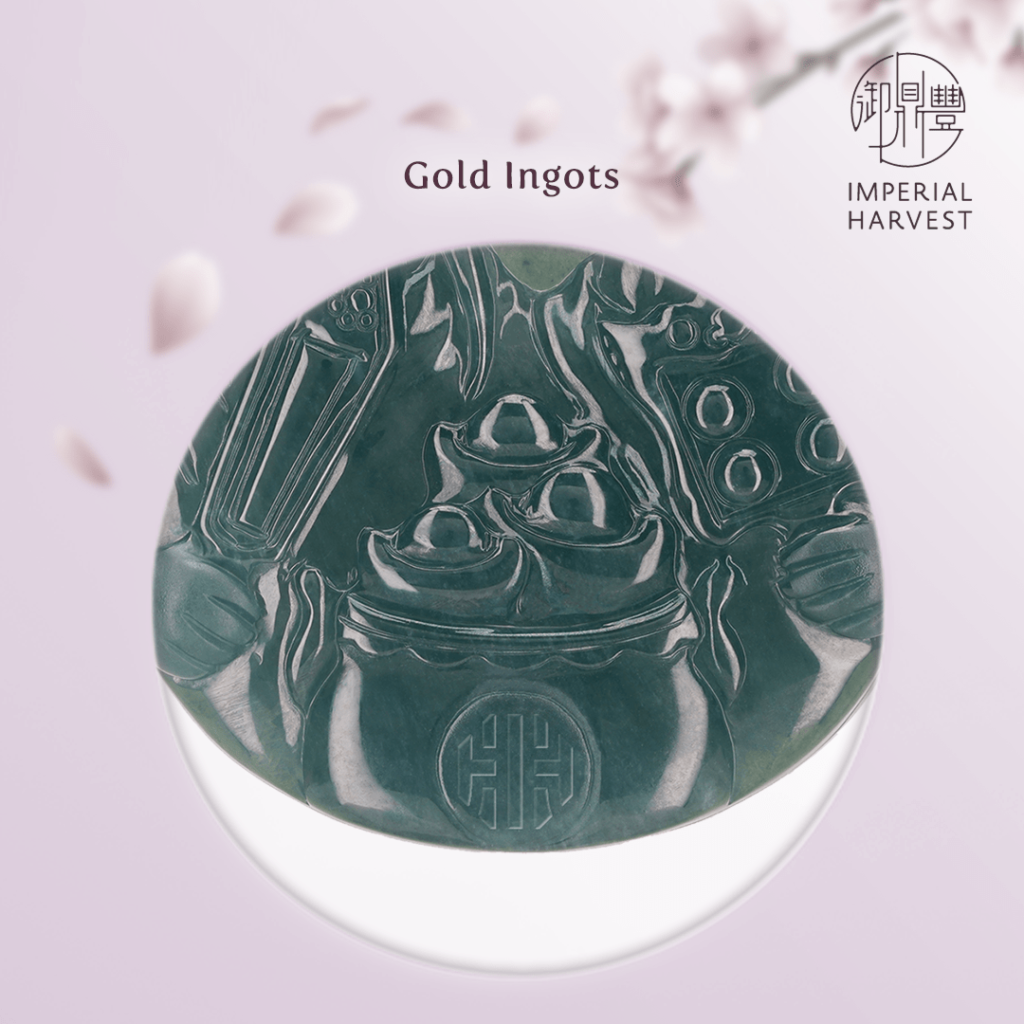 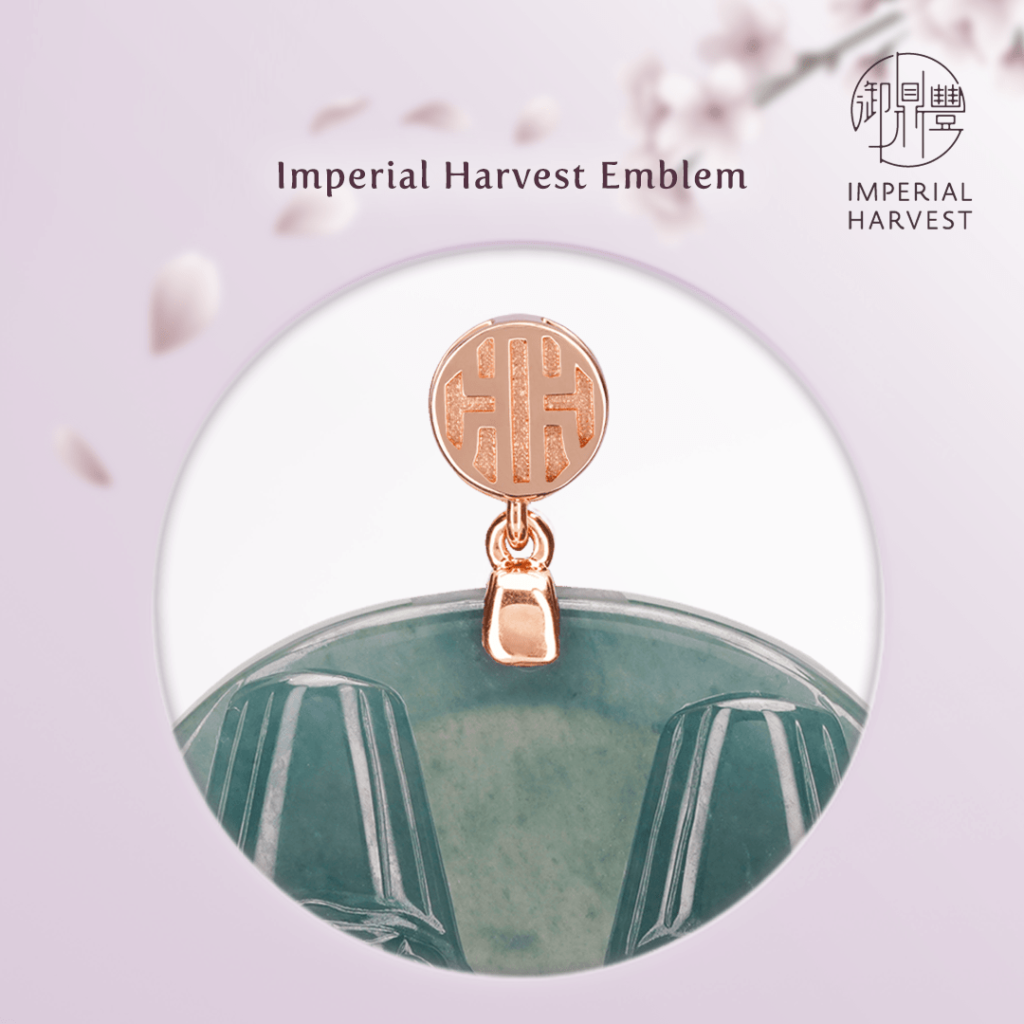 A culmination of rigorous research and design, the Imperial Harvest Fine Jadeite Tua Di Ya Pek pendant is crafted from months of Master David’s meticulous inquiry into the compelling legend of this highly feted deity. This all-new patented iteration is the foremost champion of the personal and social justice embodied by Tua Di Ya Pek, exhorting the blessed wearer to never shirk one’s obligations to pursue what is right, even in the face of strong opposition. It stands firm as a resolute emblem of righteousness – a visual and ideological representation of this timeless virtue. Indeed, in always upholding the values of righteousness, the destined owner may rightfully anticipate an ensuing abundance in material treasures for generations to come.

Usher in blessings of indirect wealth this festive period with the all-new Imperial Harvest Fine Jadeite Tua Di Ya Pek — the unrivalled and quintessential personal companion of righteousness in the 21st century. 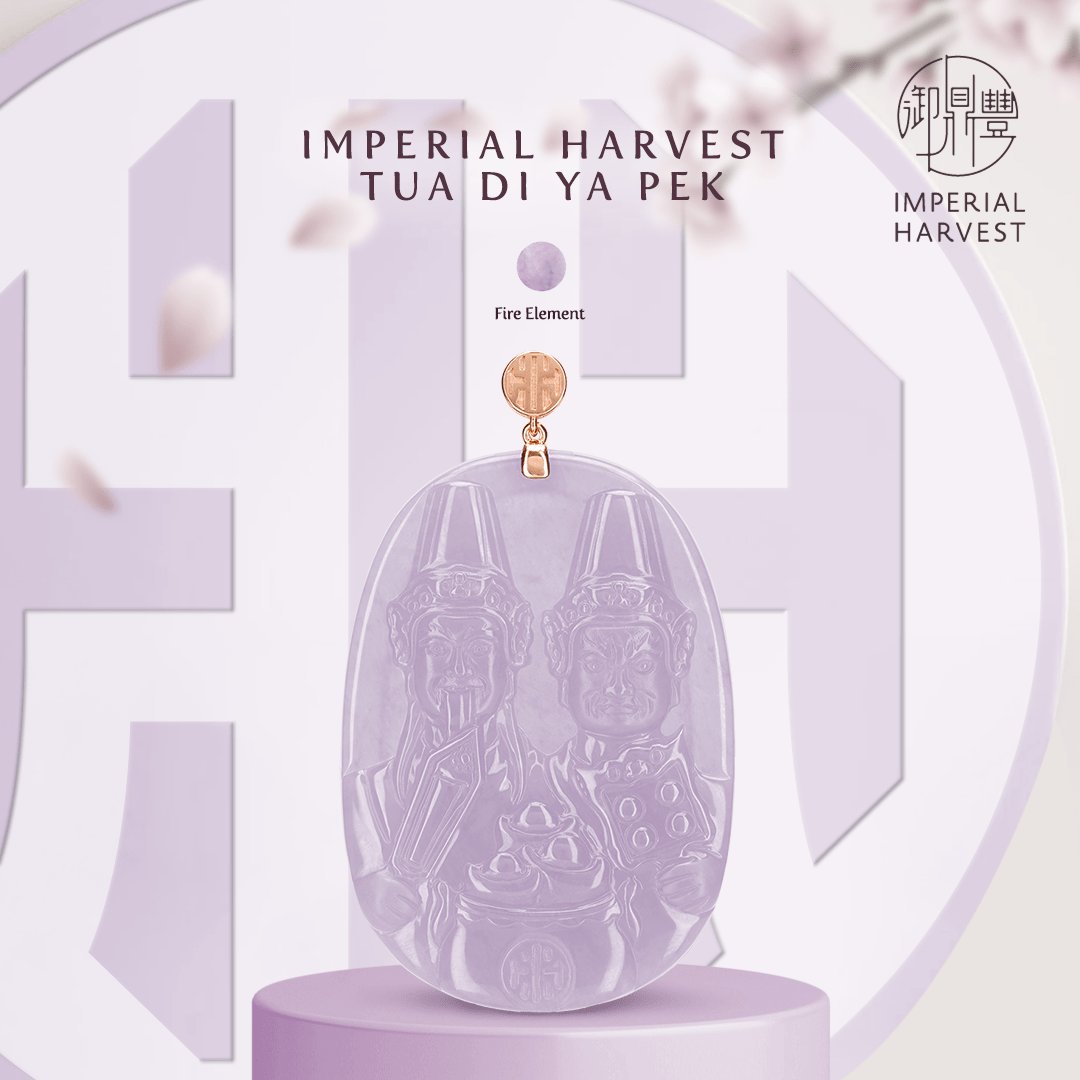 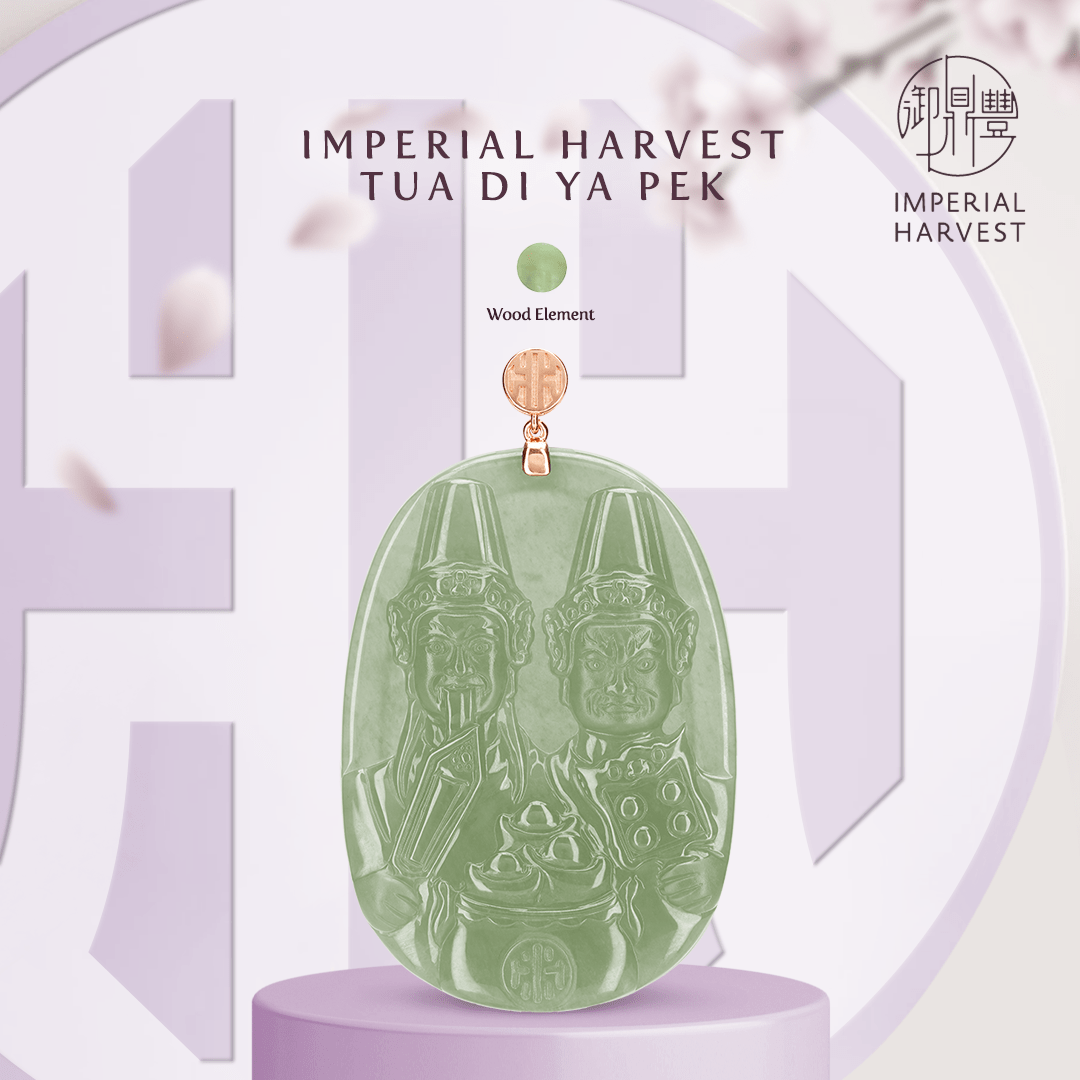 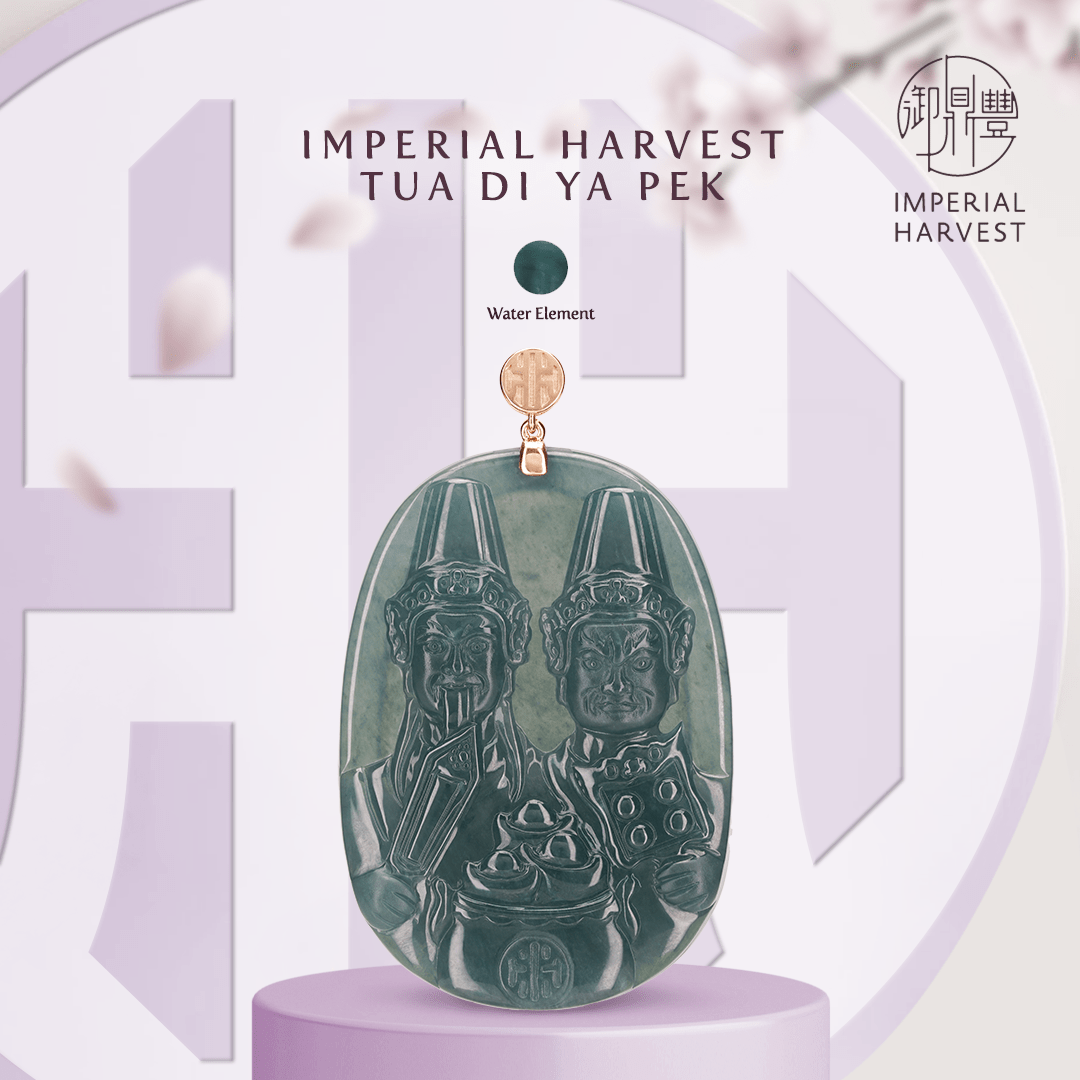 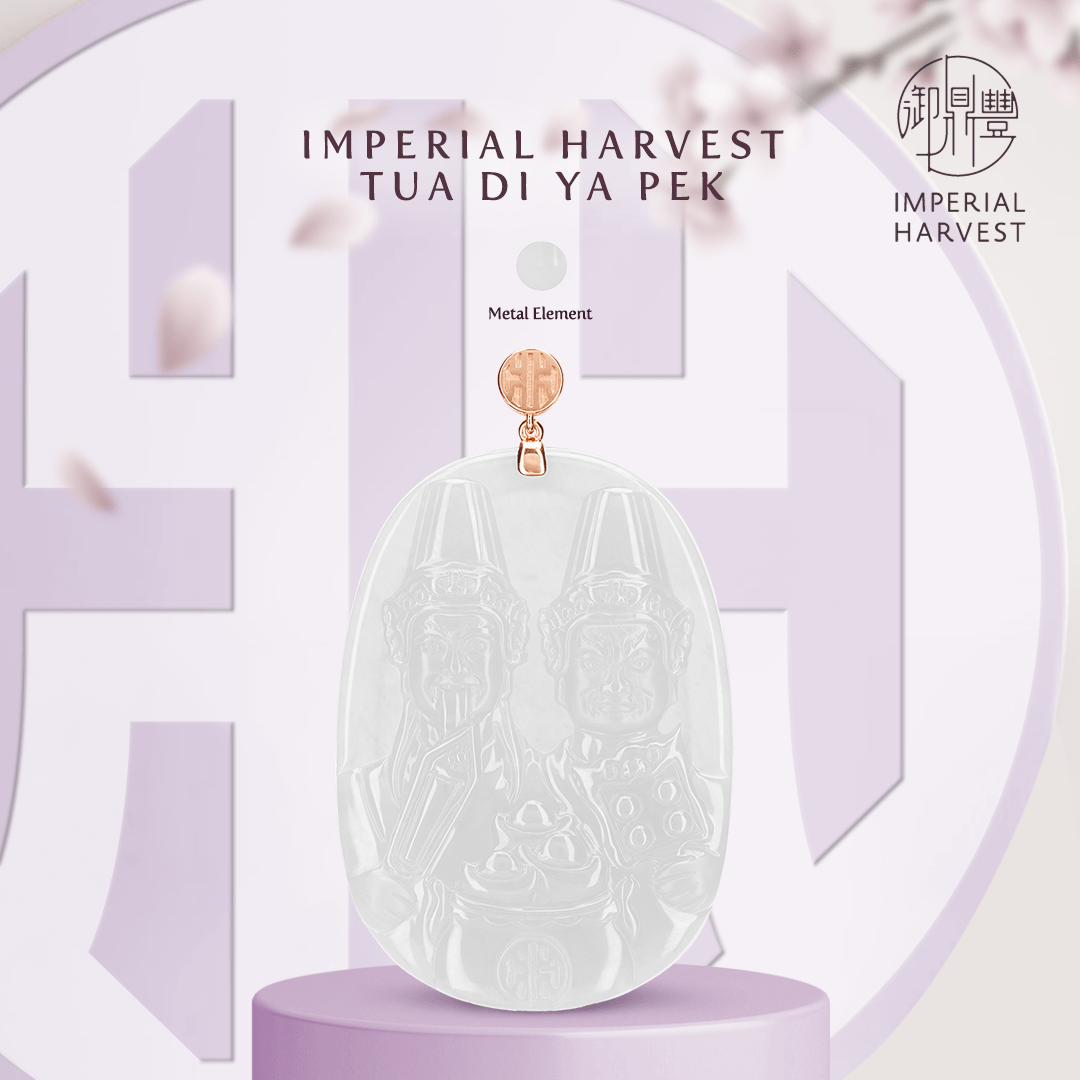 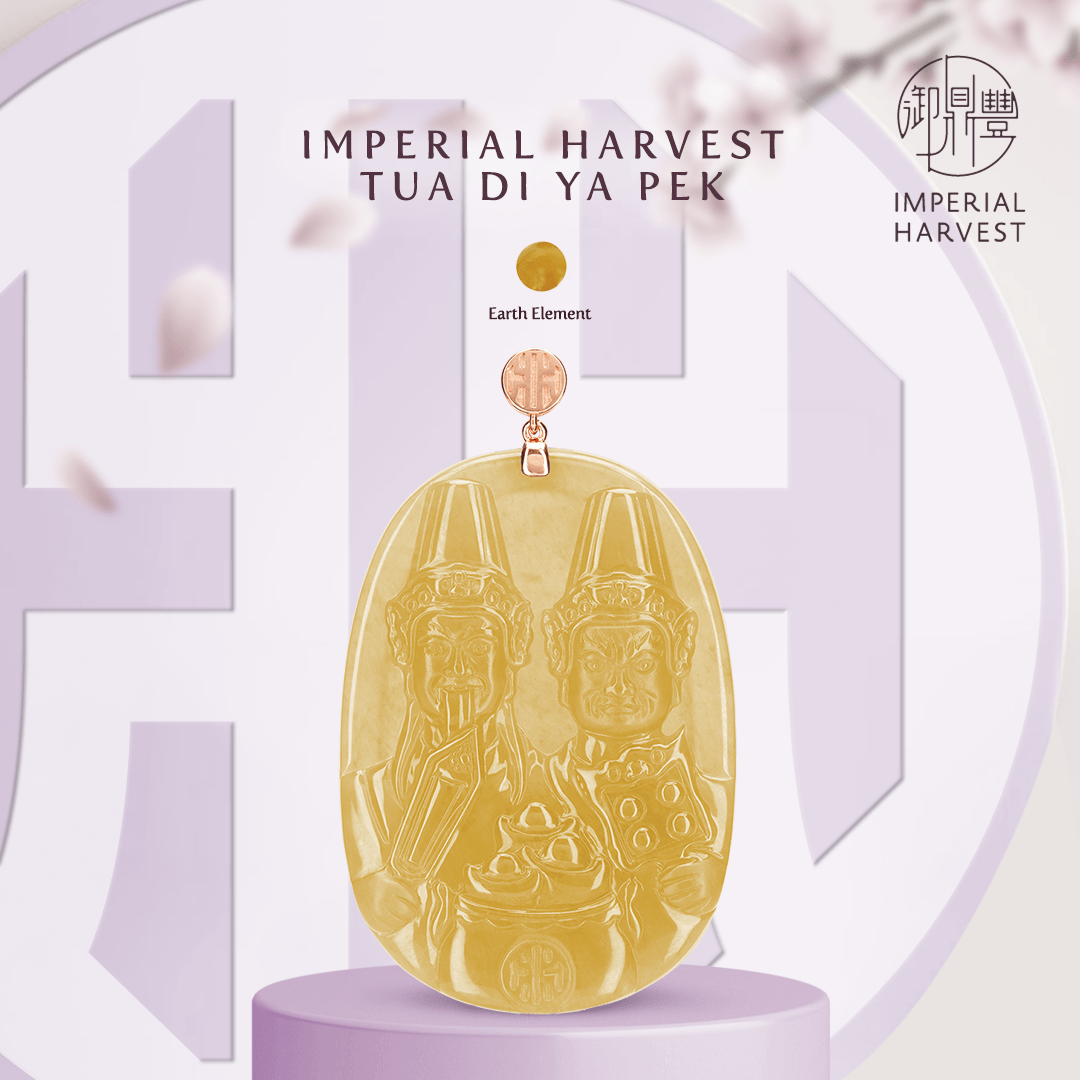