Most recently, he was engaged by Star Entertainment Group, which has a market capitalisation of $4Bn, to advise on their head office Feng Shui in Hong Kong.

In this series, Master David will reveal the secrets to a multi-millionaire home Feng Shui. This step-by-step guide aims to share how Master David helped his clients achieve multi-million success in a very short span of time despite their humble beginnings. 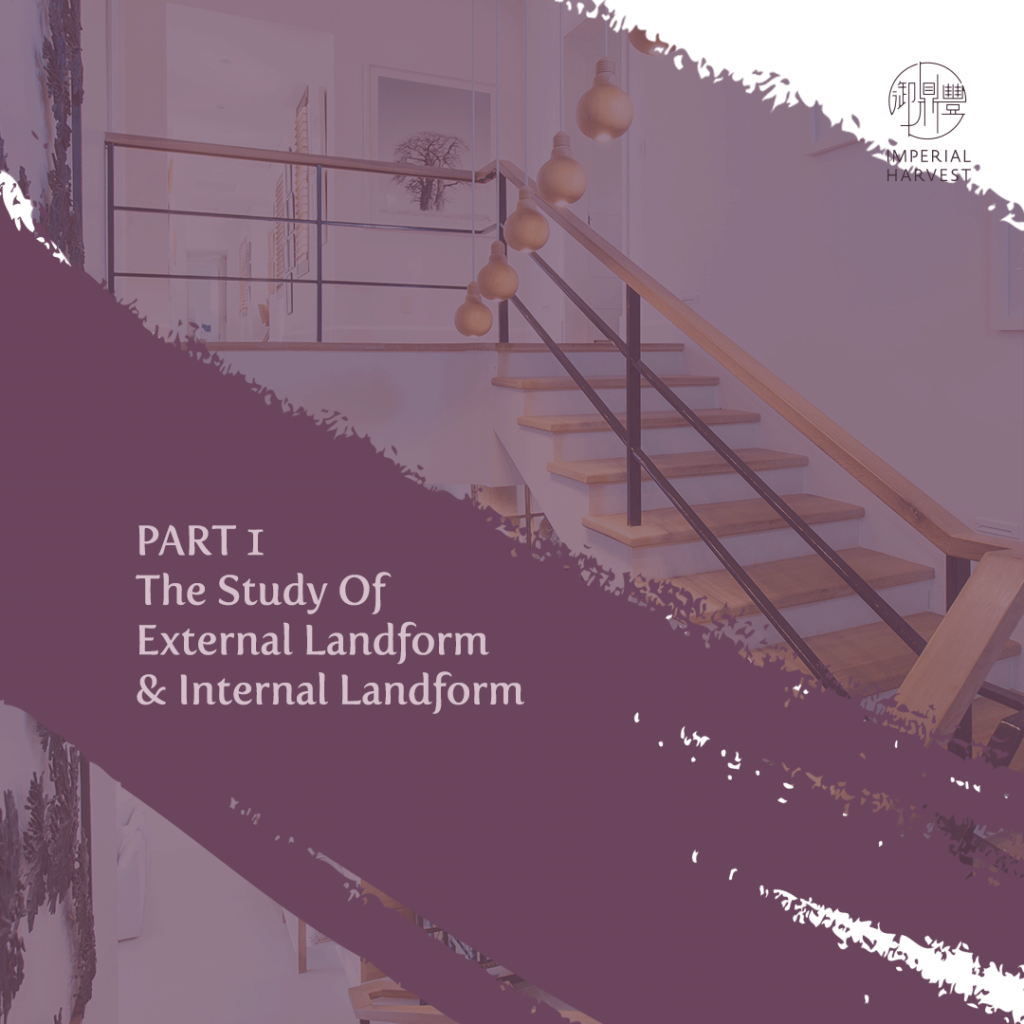 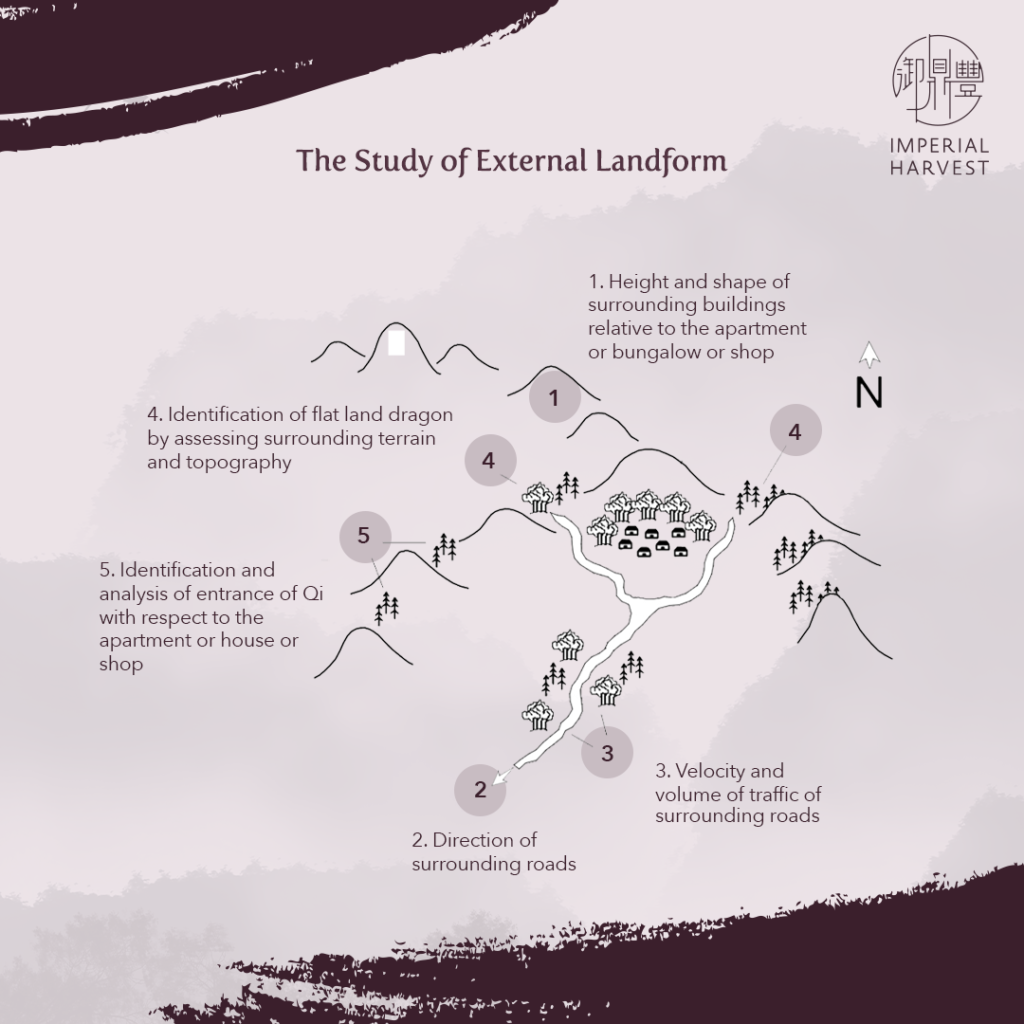 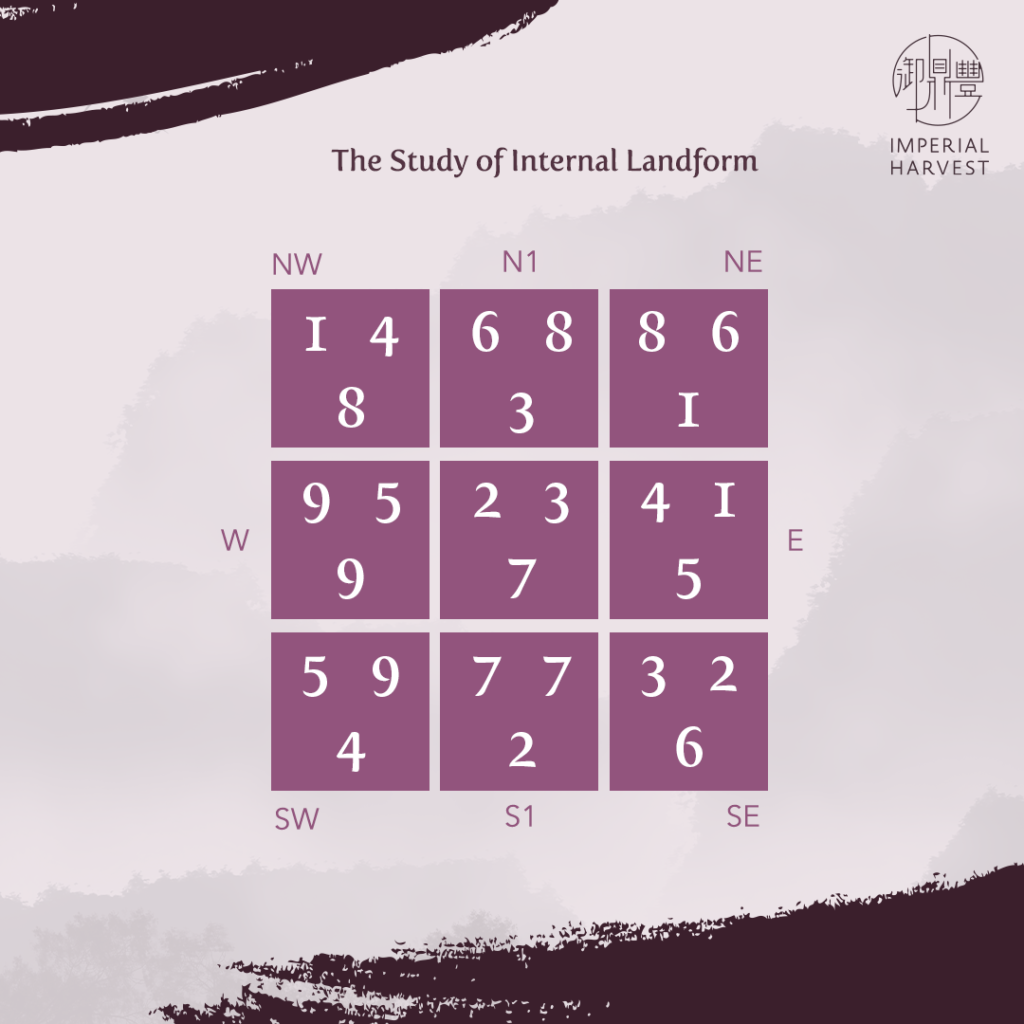 In this article, Master David reveals the little-known but powerful external landform checklists.

Based on the principles of Emperor Landform, the ideal shape of a piece of land is a square or rectangle. The term “Four Point of Gold” (四点金) was coined to describe the ideal piece of land with a regular shape. 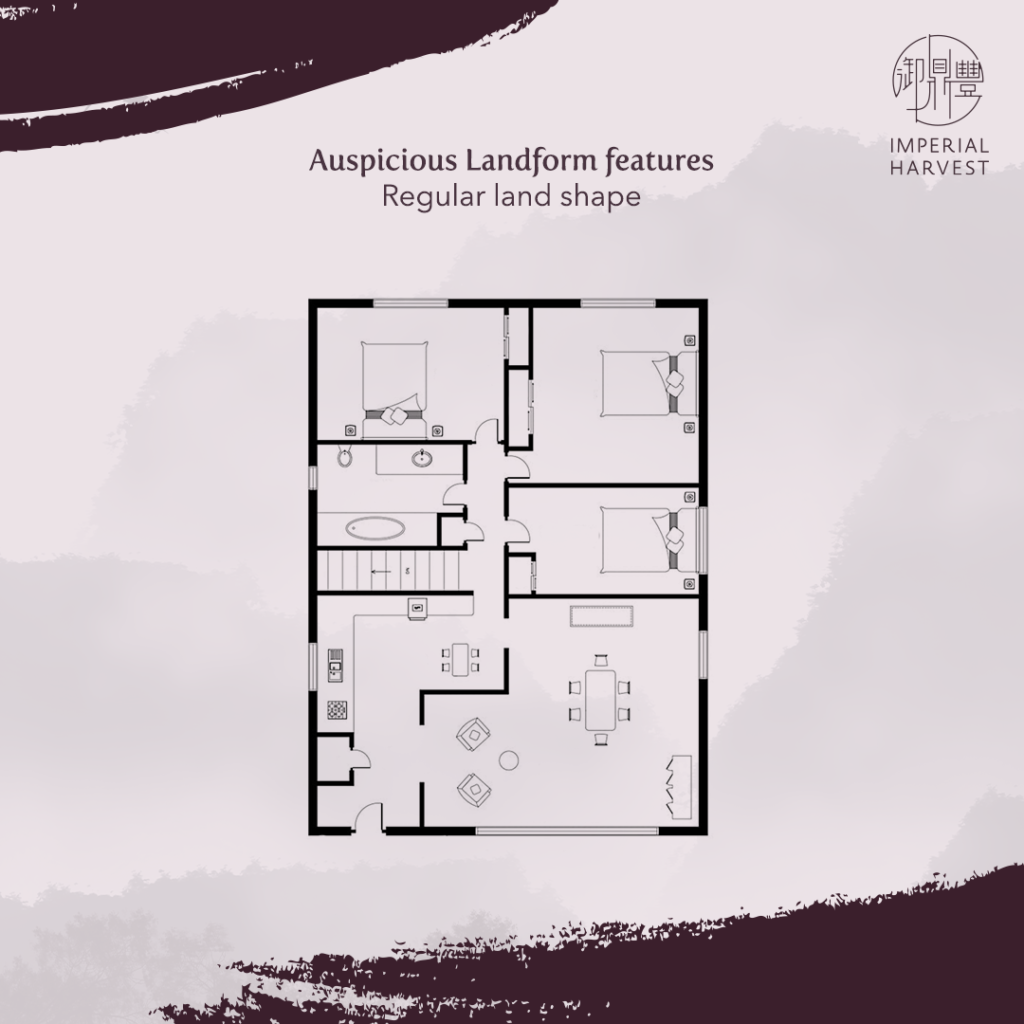 Mountain governs the benefactors, while water governs the wealth (山管人丁，水管财). The study of Imperial Landform places an important emphasis on the position of the mountain and the water with respect to the residence.

Mountains or rivers are hard to come by in urban environments such as Singapore. Hence, buildings are the mountains, while roads are the rivers.

The direction of the road (virtual water) and rivers (physical water) should ideally be flowing towards the entrance of your house or the facing direction of your building.

In the study of Imperial Feng Shui, this auspicious feature is known as 逆水朝堂 which can be translated as water flowing towards your entrance. 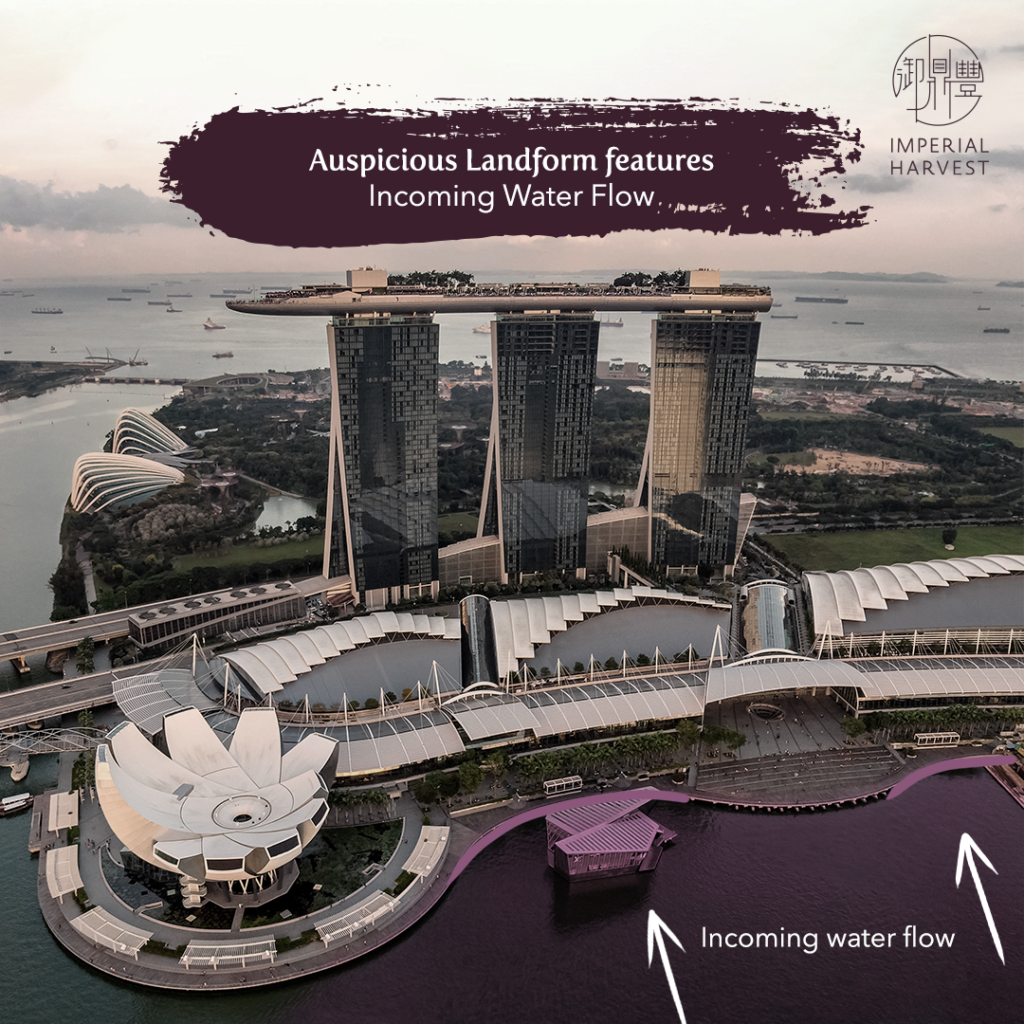 In ancient China, high-ranking government officials donned the jade belt. The term “Jade Belt” refers to a feature where the road surrounds the building, much like how the jade belt embraces the waist of the wealthy. 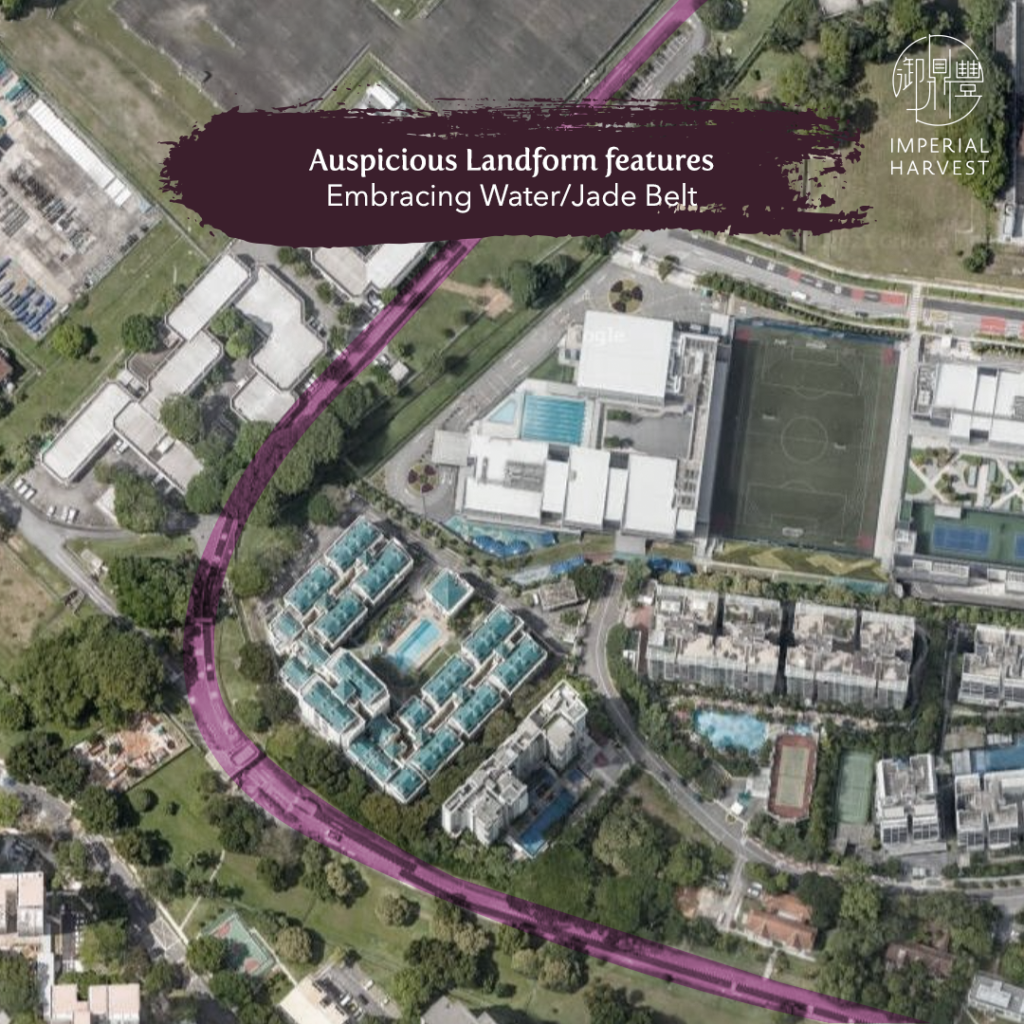 There are five elemental mountains in the study of Emperor Landform namely: Metal, Earth, Wood, Fire and Water. 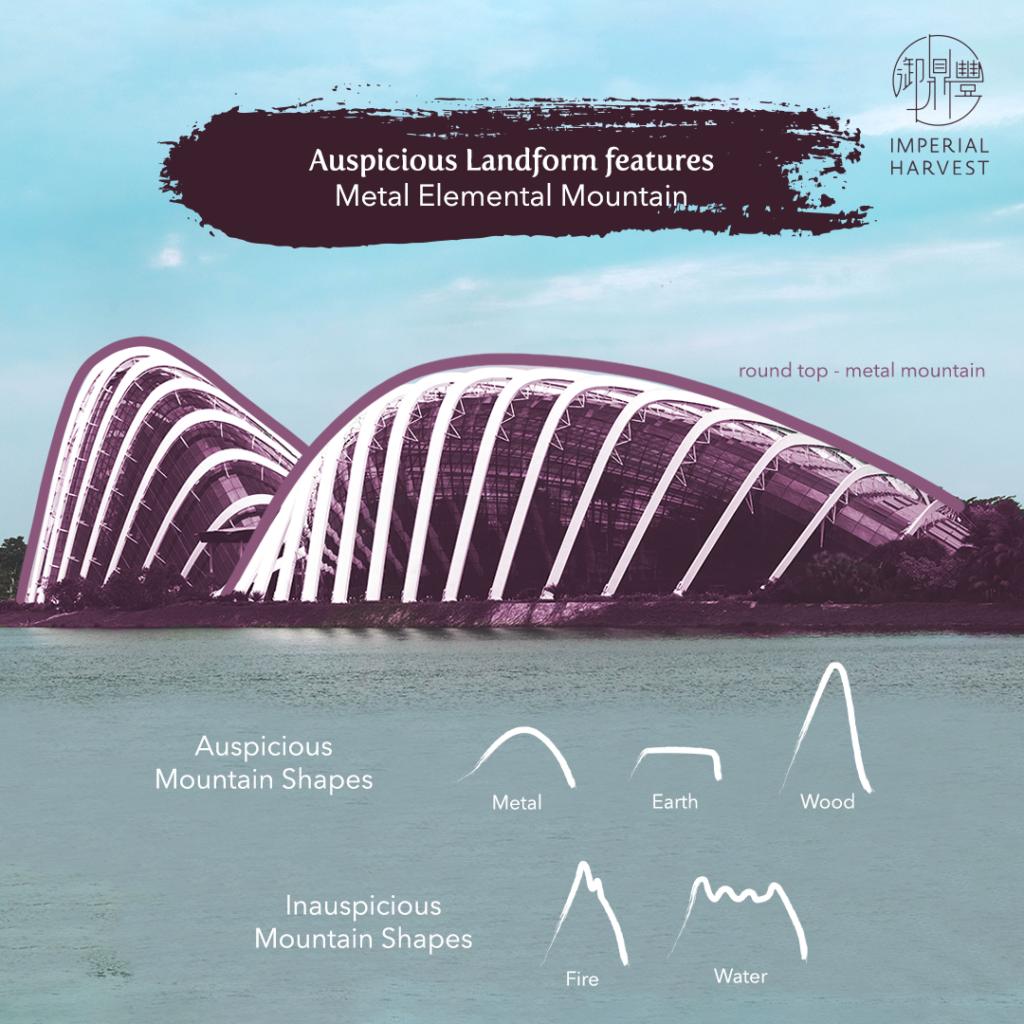 Metal mountain refers to a mountain with a round top, and is deemed as one of the most powerful wealth creation mountain features that can bring a tremendous amount of wealth and benefactor support.

Earth mountain refers to a mountain with a flat top. It has similar features as the metal mountain because, in the study of five elements, earth produces metal.

Wood mountain refers to a mountain with a conical top. In Chinese, it is known as 贪狼星 (Greedy Wolf Star). It is ideal for raising children with high scholastic achievements.

Water mountain refers to a mountain with a wavy top. It produces promiscuity and family disharmony.

In ancient China, the rich and powerful are buried at the auspicious Feng Shui positions near Metal Mountain, Earth Mountain or Wood Mountain. 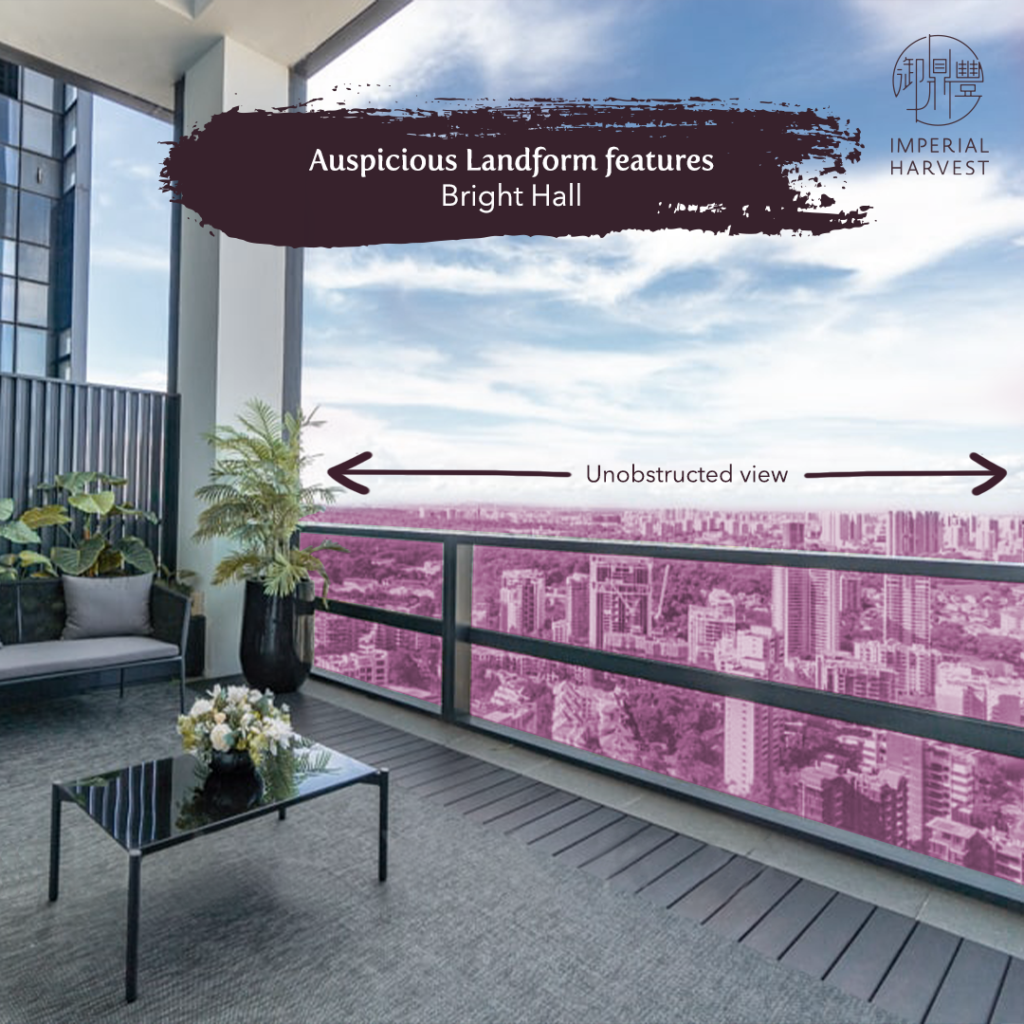 In the classics of Imperial Feng Shui, bright hall refers to the space in front of the house.

One of the golden verses in the classics of Imperial Landform states that “宅前无余地，子孙稀”. It suggests a correlation between the amount of space in front of a house and the number of descendants and offspring.

Having a spacious bright hall in front of your residence will bring wealth and prosperity for generations to come.

The powerful Imperial landform principles in house selection are widely applied to many of Hong Kong real estate and casino billionaires.

Having been appointed as the principal Feng Shui consultant to many successful entrepreneurs, Master David has worked with some of the wealthiest individuals in the world. 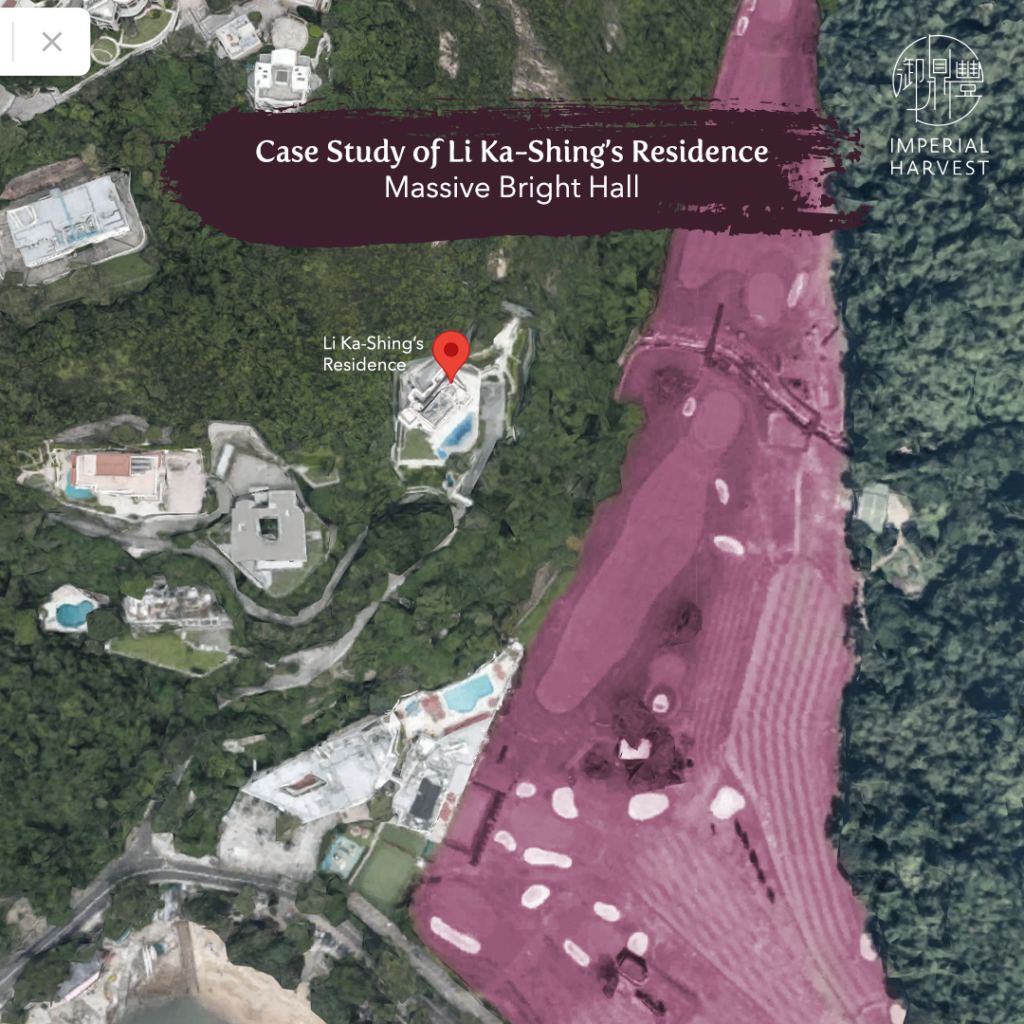 Ever wondered why Mr Li Ka-Shing’s children are both billionaires and extremely successful in their own right? The answer lies in the massive bright hall in front of his house.

The water at the deep water bay is calm and peaceful. The direction of water flow and the metal elemental mountain move in reverse direction giving rise to the extremely auspicious landform formation 逆水朝堂 incoming water flow.

Shouson Hill (150m) which is located at the back of Mr Li Ka-Shing’s residence is of the metal element because it has a round top. In the study of Imperial Landform, it is otherwise known as Gold Mountain 金山, loosely translated as a mountain of immense wealth and prosperity. 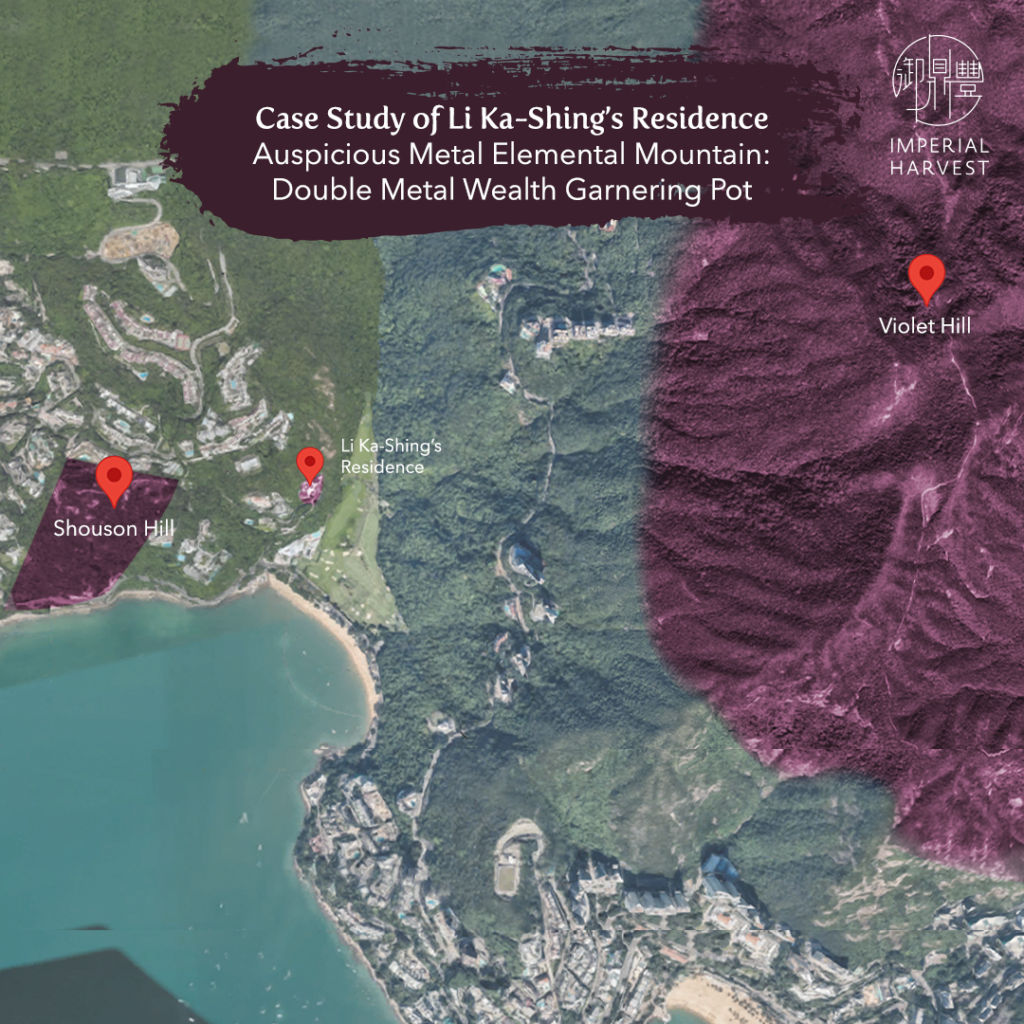 At this stage, many clients would have asked Master David: “What happens if I live in Singapore or countries where such auspicious landforms do not exist?”

Due to the lack of advanced infrastructure, Emperor Qian Long had difficulties building his palace near auspicious landforms like Metal elemental mountain.

Only the deceased royalties are buried at auspicious spots flanked by metal elemental mountains.

It is specially commissioned to create the auspicious landform within the Imperial Palace. 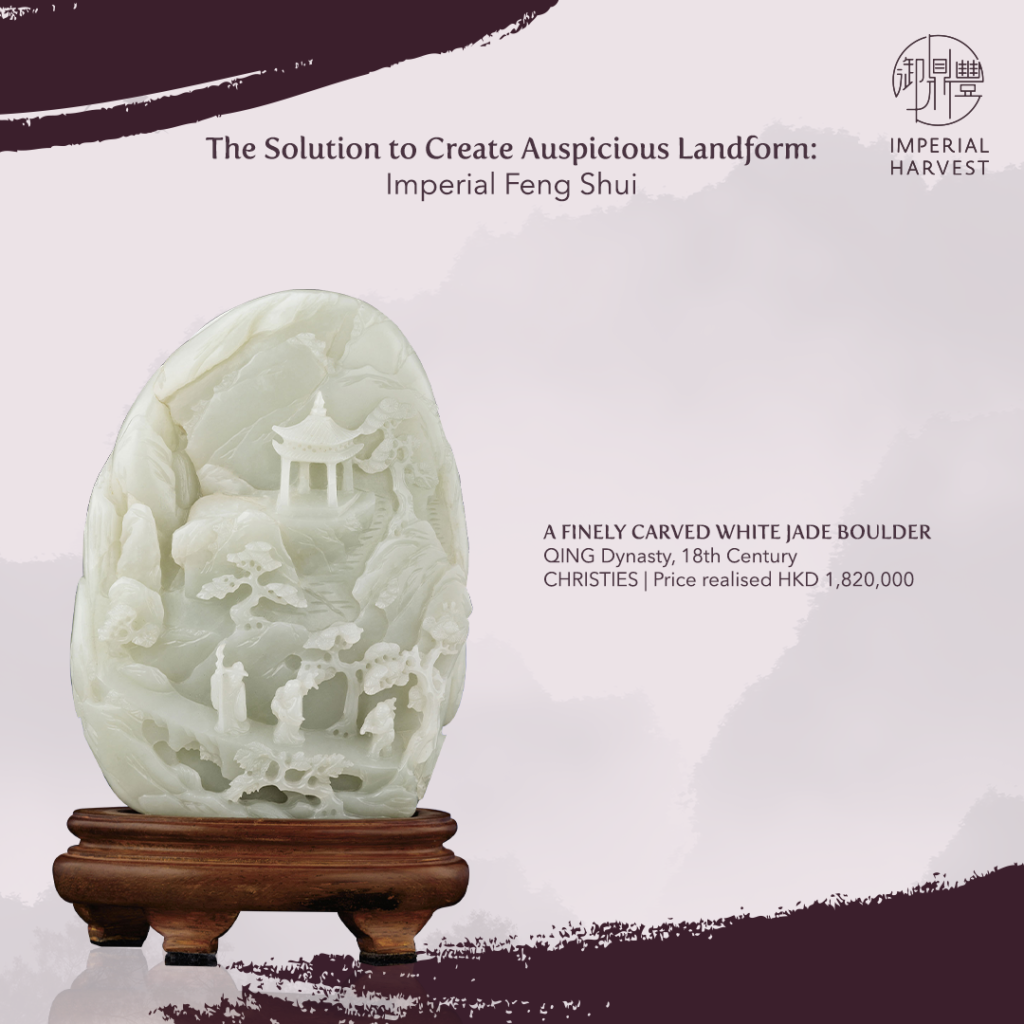 Master David leverages his tri-generational of Imperial Feng Shui wisdom to help his clients create the auspicious landform within their residence. 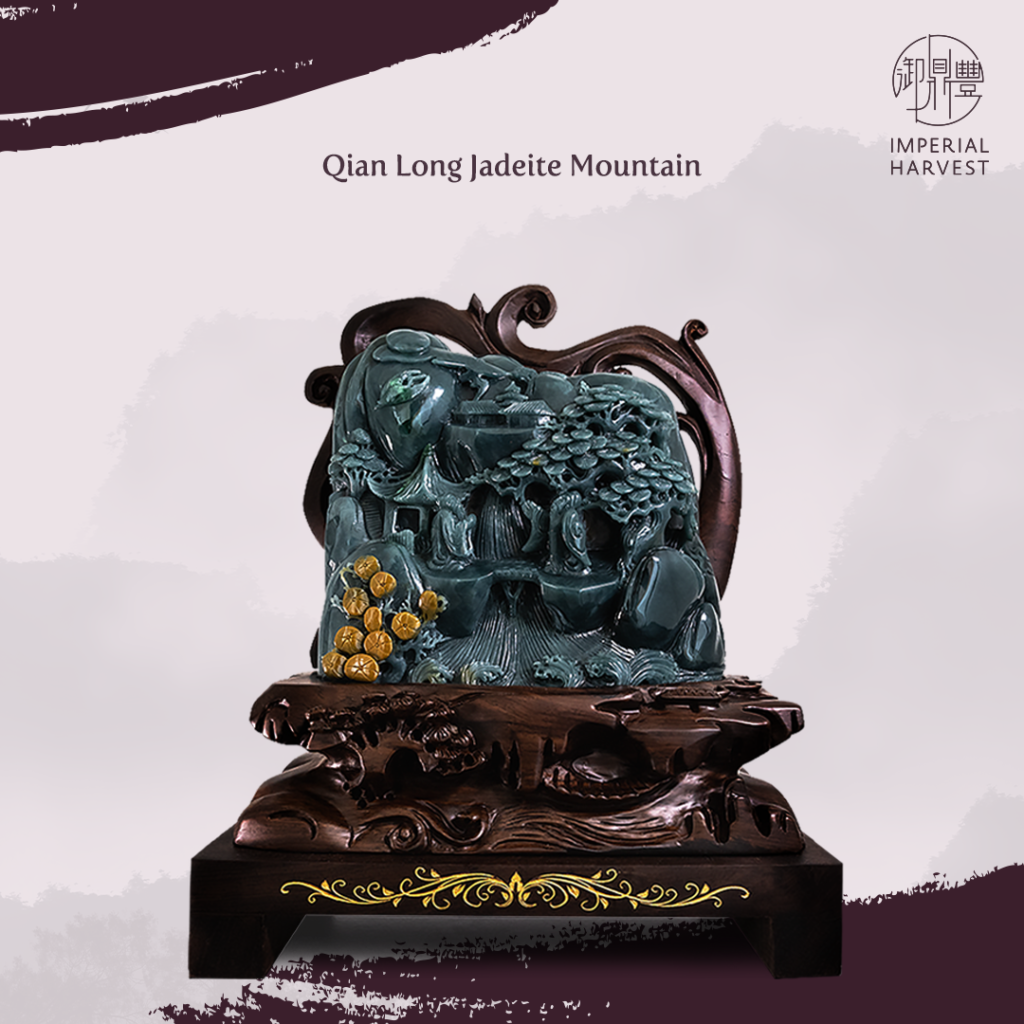 On 14 September 2018, Master David announced the launch of Imperial Harvest’s Qian Long Jadeite Mountain after 4 years of design, research and development and carving.

Click here to learn about the Qian Long Jadeite Mountain