Several VIP clients have waited 3 years for this exclusive and extremely rare collection.

Only Chinese Emperors of the past have exclusive and privileged access to this elusive and exclusive tier of Agarwood: Qinan (奇楠)

Qinan is the most elusive and exclusive tier of Agarwood. Since the Han Dynasty, Chinese Emperors have been offering Qinan to send their prayers to the heavens for blessings and prosperity.

This excerpt from Du Fu’s poem is loosely translated as “Sea shell is more valuable than the rental income earned from a mountain. A piece of Qinan is worth more than the value of a municipal ship.”

In the Han Dynasty, the price of a piece of Qinan was higher than a fully functioning municipal ship.

His reign was characterised by peace, prosperity, and progress in arts and culture which laid the foundation of a unified China, an incredible feat that no other rulers had come close to achieving. He lived a long, healthy, and fulfilling life.

Aside from being a brilliant natural leader, Emperor Qian Long intelligently identified that the ability to change the future was superior to knowing the future – an important principle of Imperial Feng Shui.

Imperial Feng Shui utilises the finest earthly treasures such as jadeite, sandalwood, agarwood and crystals – empowering individuals to succeed naturally in all aspects of their lives – careers, businesses, investments, health and relationships.

Emperor Qian Long owned an extensive collection of Imperial Feng Shui treasures from  Imperial Jadeites to Qinan Agarwood beads to enhance his personal luck and to expand his wealth capacity. This is the reason why his reign and rule were characterised by an unprecedented level of peace and prosperity.

White Qinan is the most important tier of Agarwood in the Imperial Harvest Agarwood collection. In ancient times, only Chinese Emperors have access to White Qinan.

White Qinan Agarwood is strictly for the king. It empowers the most ambitious to rise to the top of their game in their respective industry.

Resin Characteristics: The presence of active tissues in White Qinan creates a strong contrast between the active fibres (white-brownish patches) and dark & rich resins. A small incision of White Qinan will reveal a dark and rich Agarwood resin underneath its white exterior. Over time, the incised area will heal and return to the signature White Qinan exterior surface. 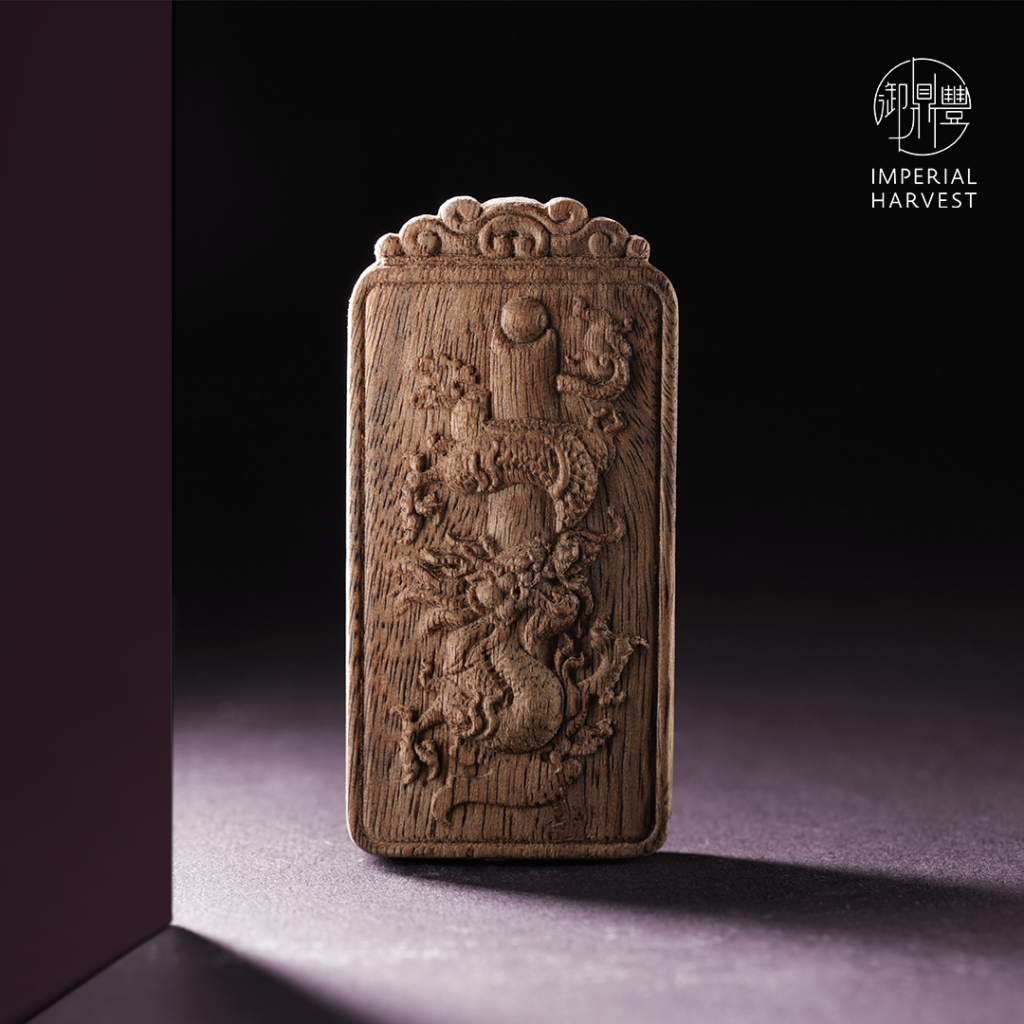 Fermentation: 3000 years and above 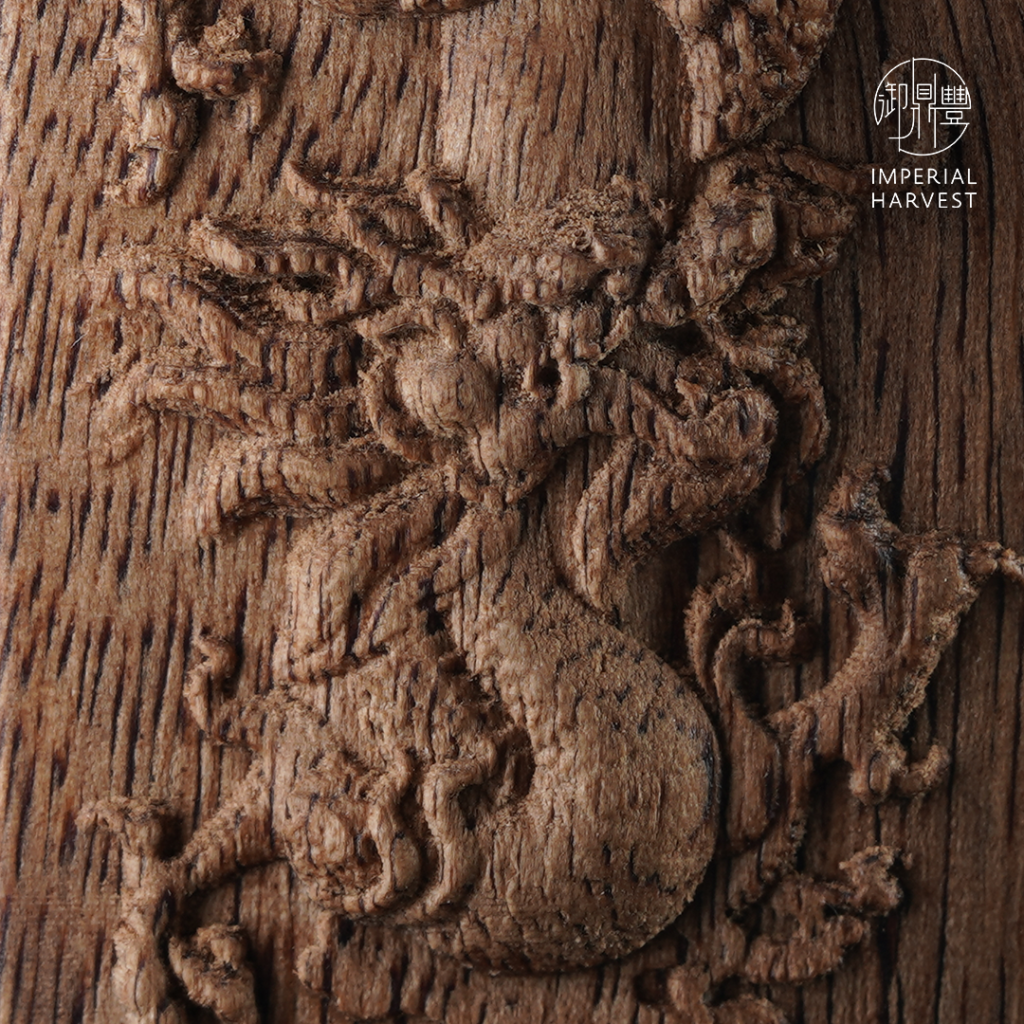 The dragon, a mythical animal arising from an ancestral imaginary world and indissociable from Oriental culture, has multiple meanings. Here, it is a symbol of perseverance and success as well as of the power and strength that makes it a master of the elements.

In ancient China, the Celestial dragon embodied a visual representation of the emperor and power, whereas today it is the ultimate symbol signifying success and happiness. A Sung Dynasty manuscript once described the dragon as having the head of an ox, muzzle of a donkey, eyes of a shrimp, horns of a deer, body of a serpent covered with fish scales and the feet of a phoenix. Invariably accompanied by thunder and rain, dragons move like lightning and whirlwinds – all powerful yet totally unpredictable. 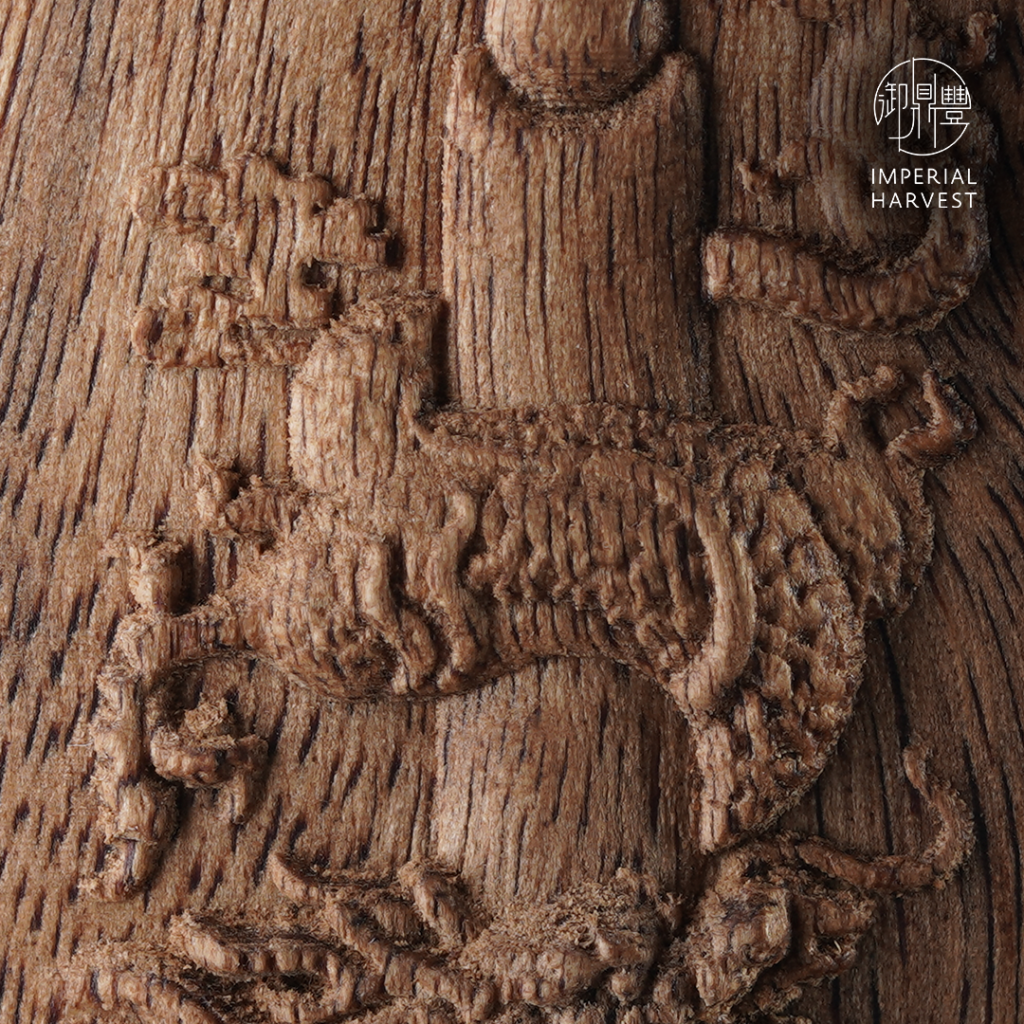