Posted by Imperial Harvest on 18 February 2022

San Yuan Xuan Kong Flying Star is a Feng Shui discipline that integrates the studies of the Five Elements, Eight Trigrams, Lo Shu Numbers, Planetary stars and 24 Mountains. This helps us understand the influence of planetary stars, direction, space and time on a house, office or shop. San Yuan Xuan Kong Flying Star practitioners’ work involves measuring the facing direction of a building and plotting its astrological chart based on the Feng Shui period it belongs to.

There are two time systems governing the studies of Xuan Kong Feng Shui:

What is a Feng Shui period?

A Feng Shui period (元运) is a multi-planetary calendar system that tracks the movement of major planets like Mercury, Venus, Mars, Jupiter and Saturn relative to Earth. 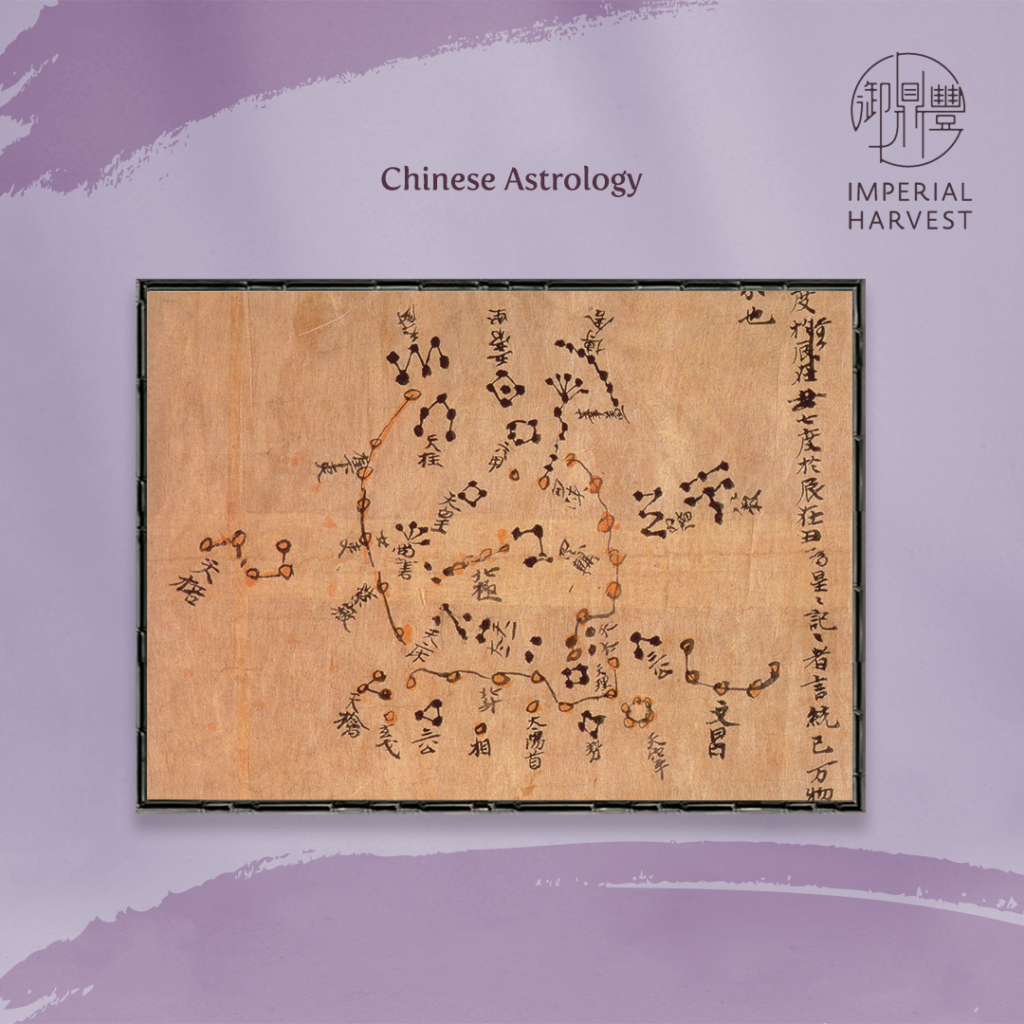 The ancient sages spent centuries studying the movement of planetary stars. This eventually gave birth to the two distinct calendar systems that study how the movements of the planetary stars affect the energies of our residences, offices and factories. 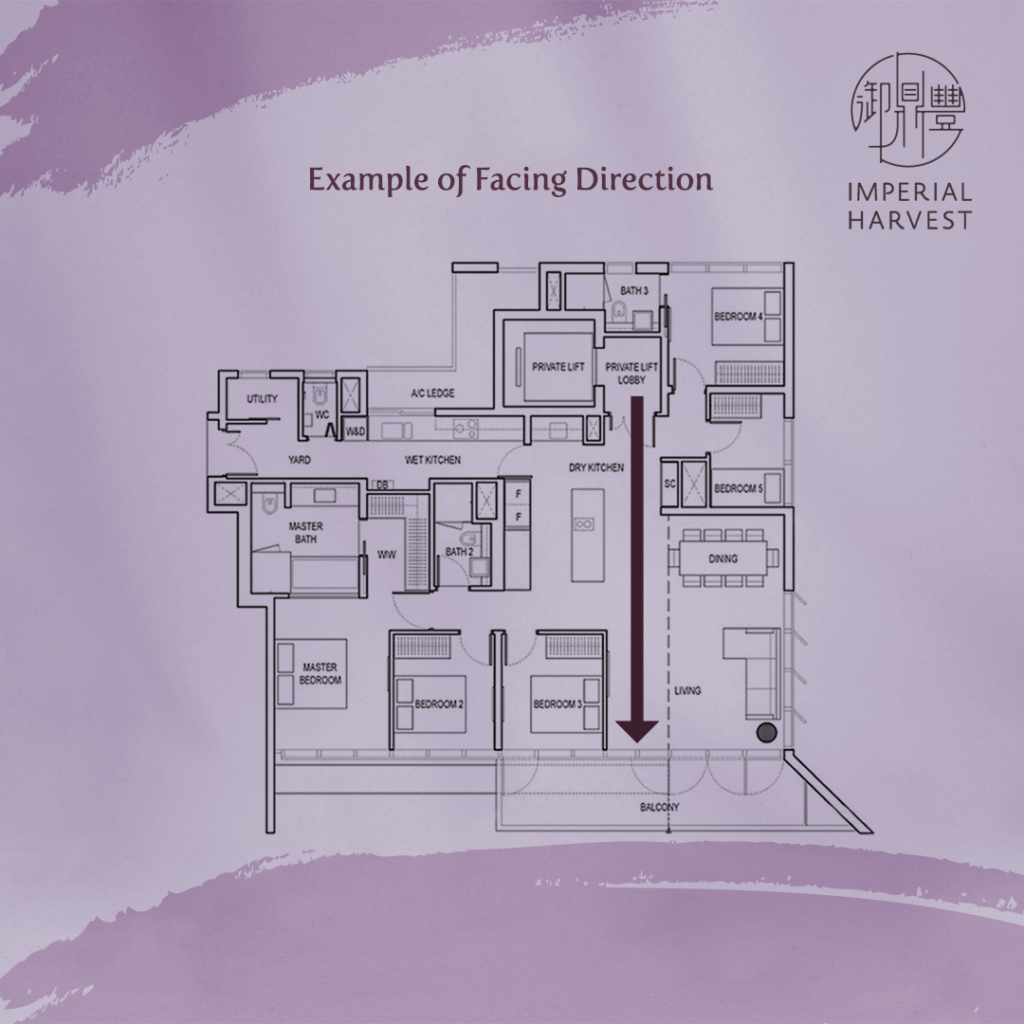 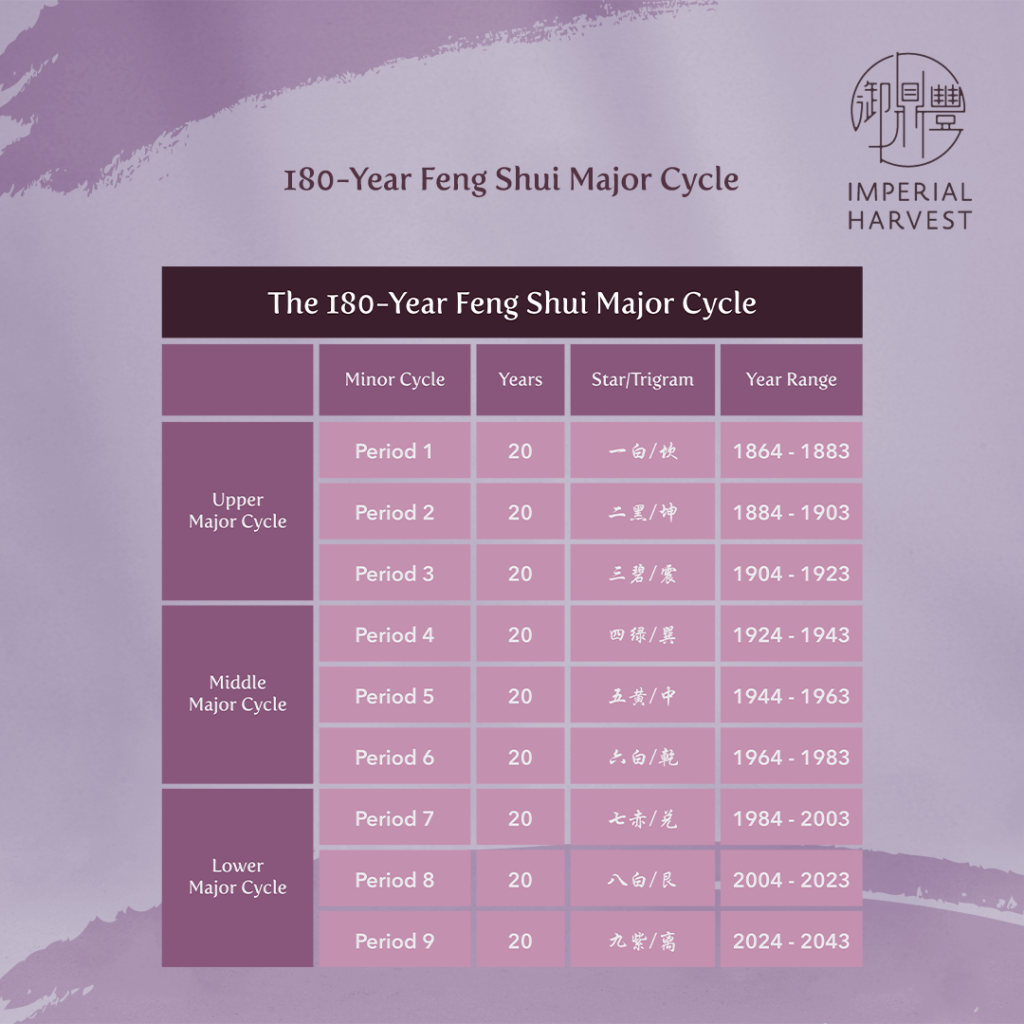 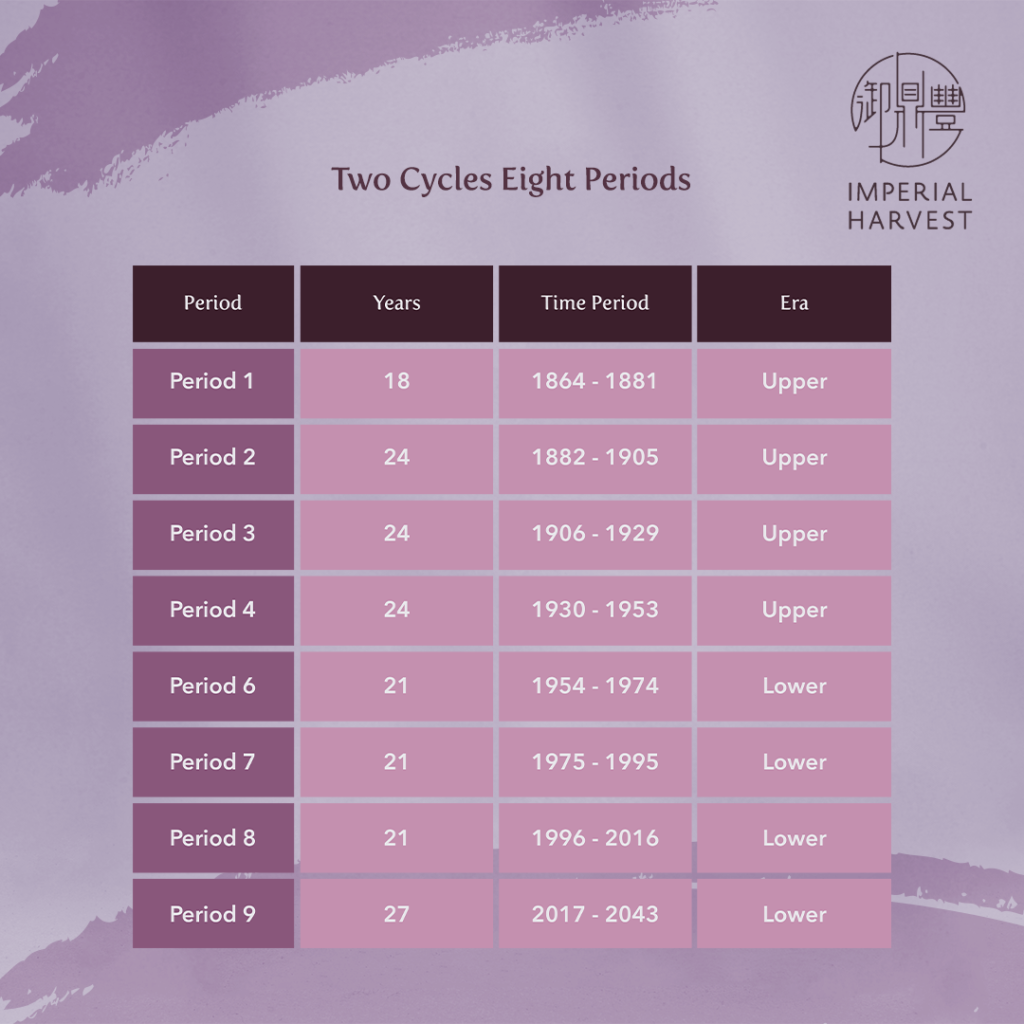 The methodology of calculating the number of years in each Feng Shui period is done by referencing the numbers on the Lo Shu squares and matching them with the trigram positions of the Early Heaven Ba Gua.

Ancient Chinese legends tell of Emperor Yu-Huang swimming in the mighty Yellow River (Huang-He). The Emperor sought solitude by the river’s edge and as he gazed into the water, he saw a turtle at his feet. He immediately recognised the turtle, realising that it bore a resemblance to the pattern of stars that he saw each night before he went to bed. Noticing that the turtle had a special pattern on its back, Emperor Yu-Huang realised that the creature was the Divine Turtle. The Lo Shu Square is a 3 by 3 grid pattern, with dots in the centre of the square, and 15 dots in each row. 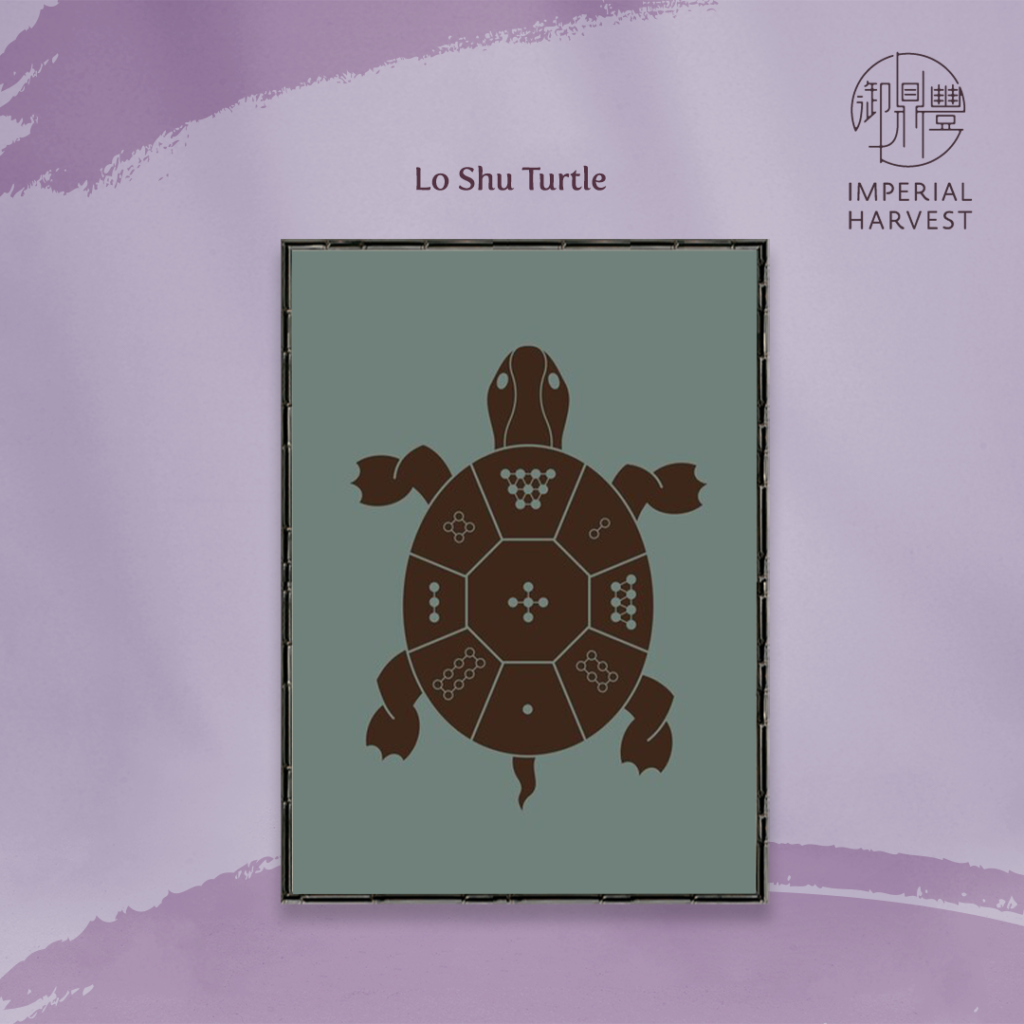 The Lo Shu Square was an important model for time, direction and space, serving as a basis for city planning, tomb design, and temple design. It was used to designate spaces of political and religious importance.

Each number in a Lo Shu Square represents a direction. For example, 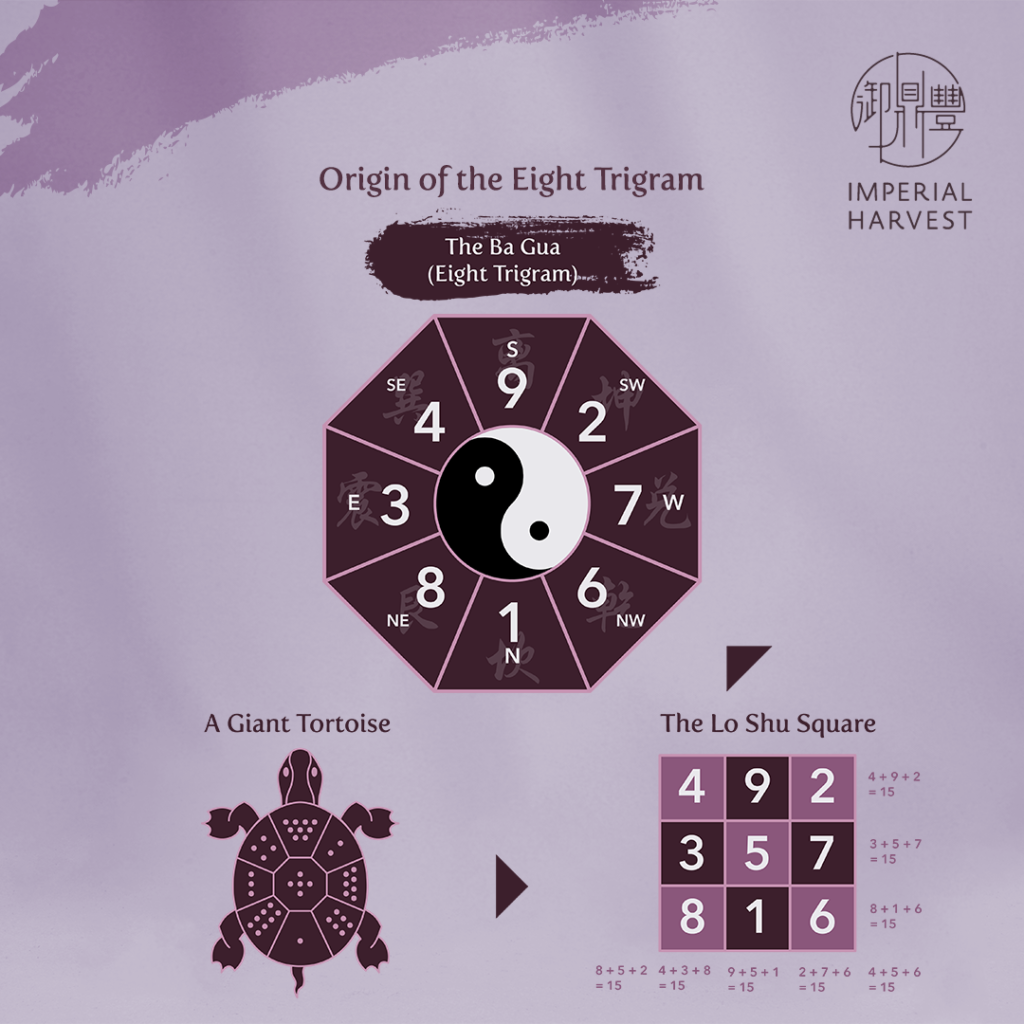 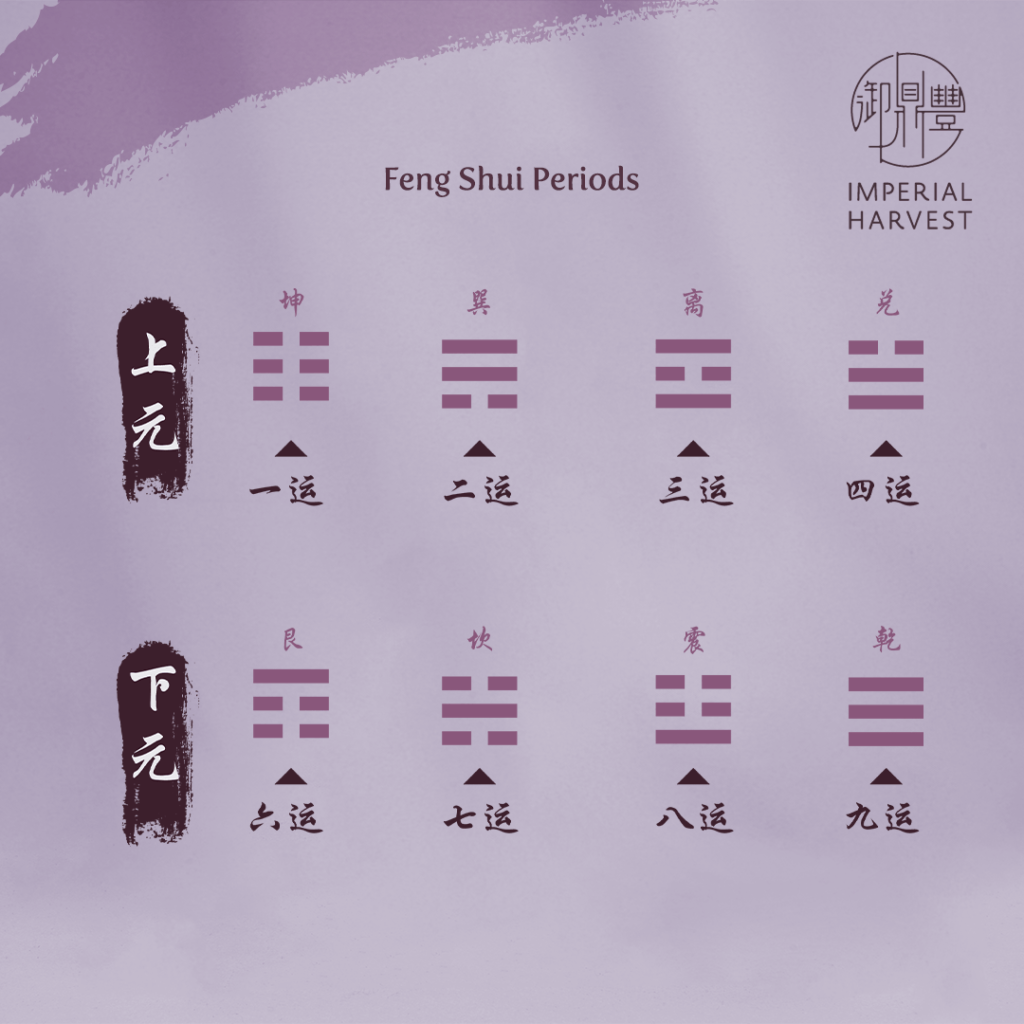 The Two Cycles Eight Periods system denotes two primary cycles: Upper Cycle and Lower Cycle. The Upper Cycle consists of Periods 1, 2,3 and 4 whereas the. Lower Cycle consists of Periods 6,7,8 and 9. The duration of each period is different, unlike the Three Cycles Nine Periods system where every period is a standardised 20 years.

A fundamental difference between the two different time systems would be the trigram that is used to represent each Feng Shui period.

The table below details the relationship between the Eight Trigrams and Feng Shui Period. 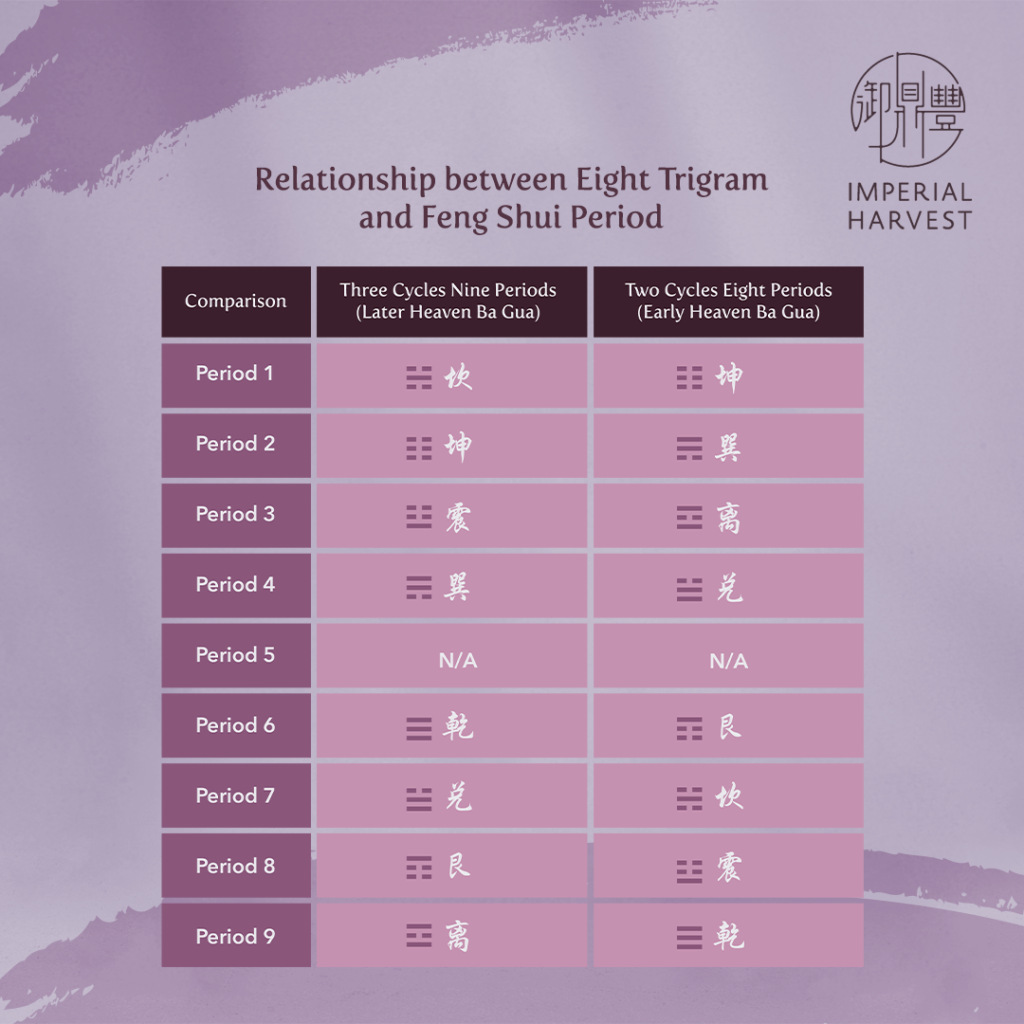 How do we calculate the number of years in a Feng Shui period in the Two Cycles Eight Periods system?

With the trigram identified, each yin yao (阴爻) line will be allocated the number 6, while yang yao (阳爻) lines are represented by the number 9. Adding up the total of the 3 numbers would generate the number of years. 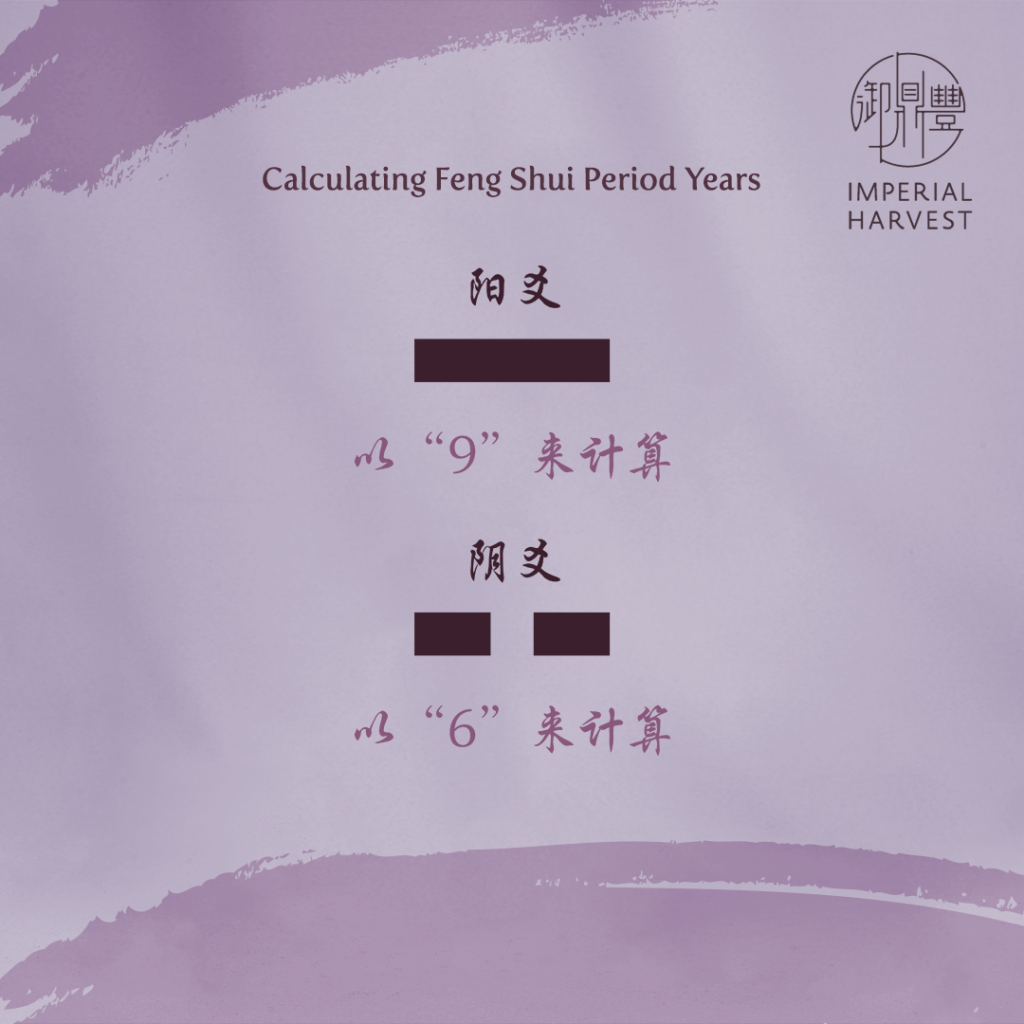 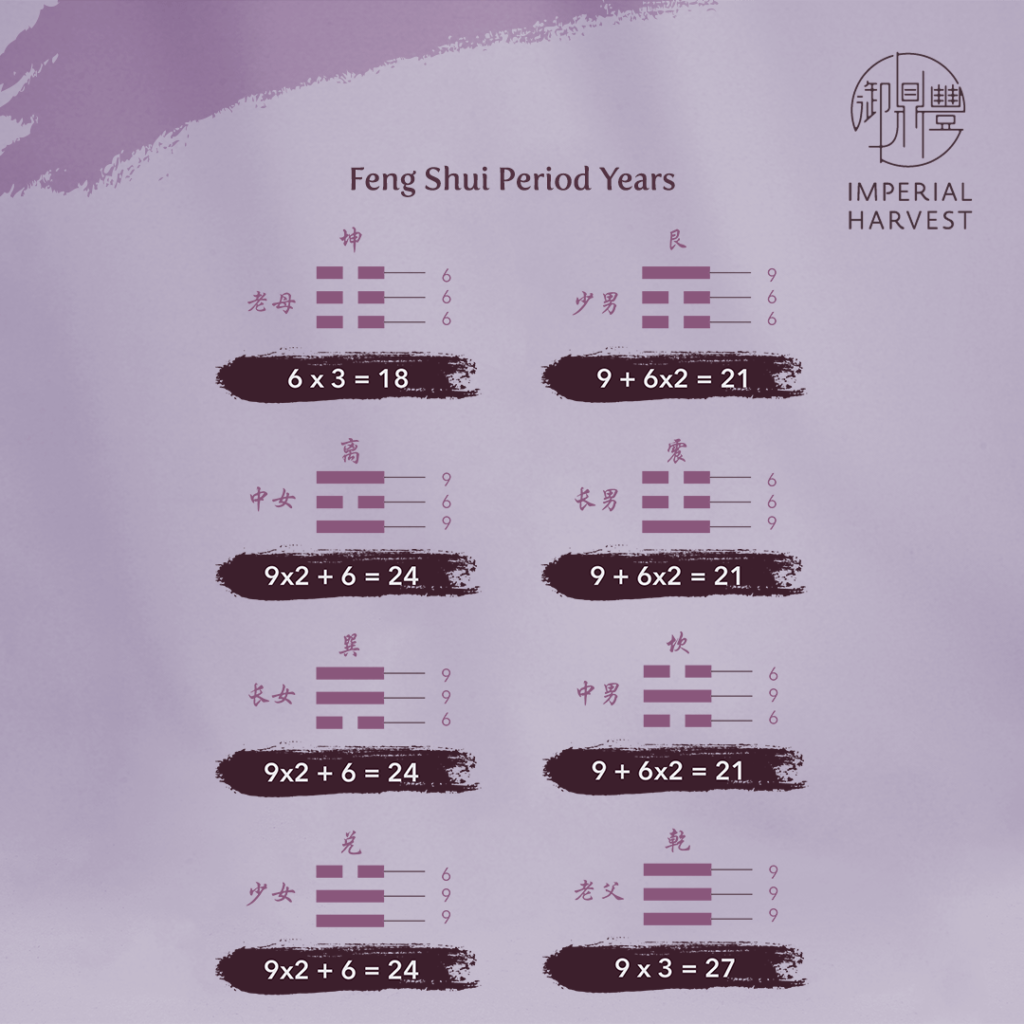 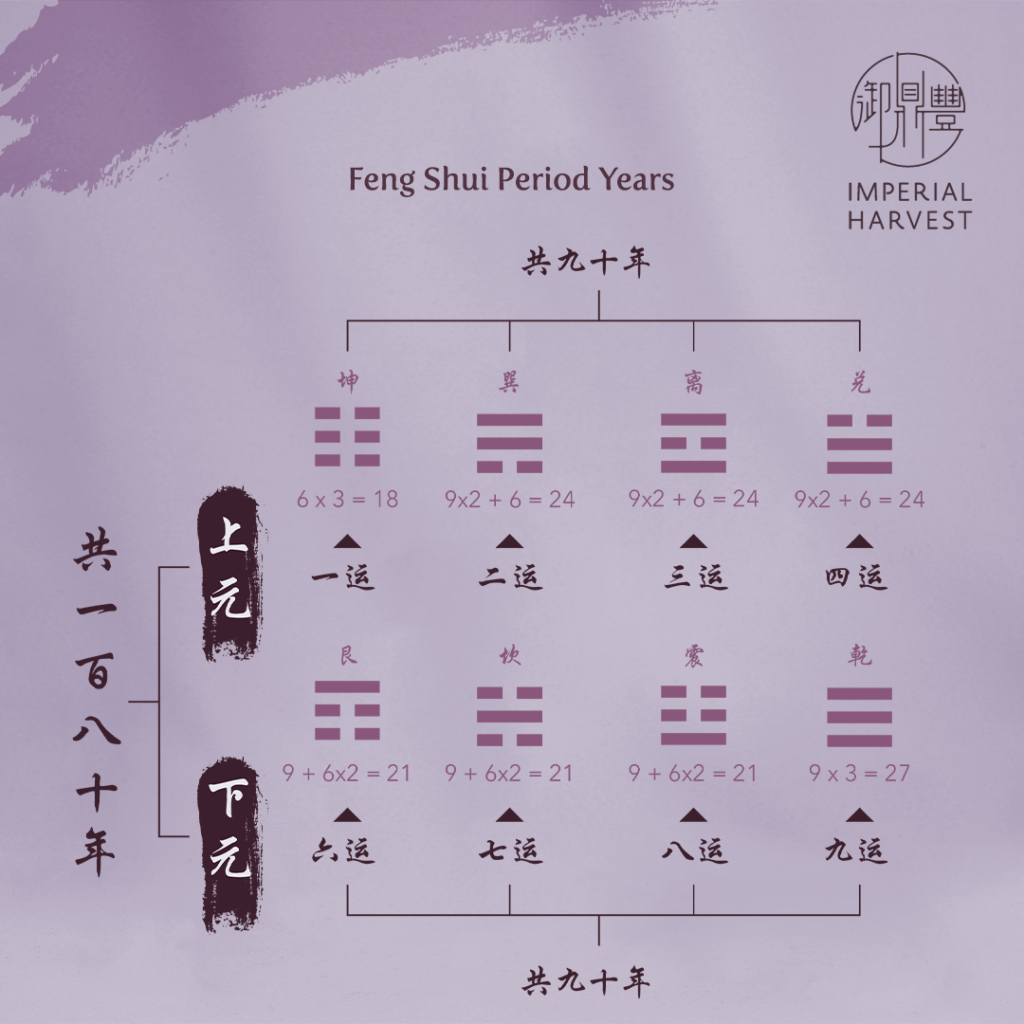 Under the Two Cycles Eight Periods system, there are two separate streams of Feng Shui periods: one that tracks the mountain luck (early heaven luck) and one that tracks the water luck (later heaven luck). At the same time, we should bear in mind that according to Imperial Feng Shui classics, Mountains governs benefactors, health and harmony,  while water governs wealth. (山管人丁，水管财) 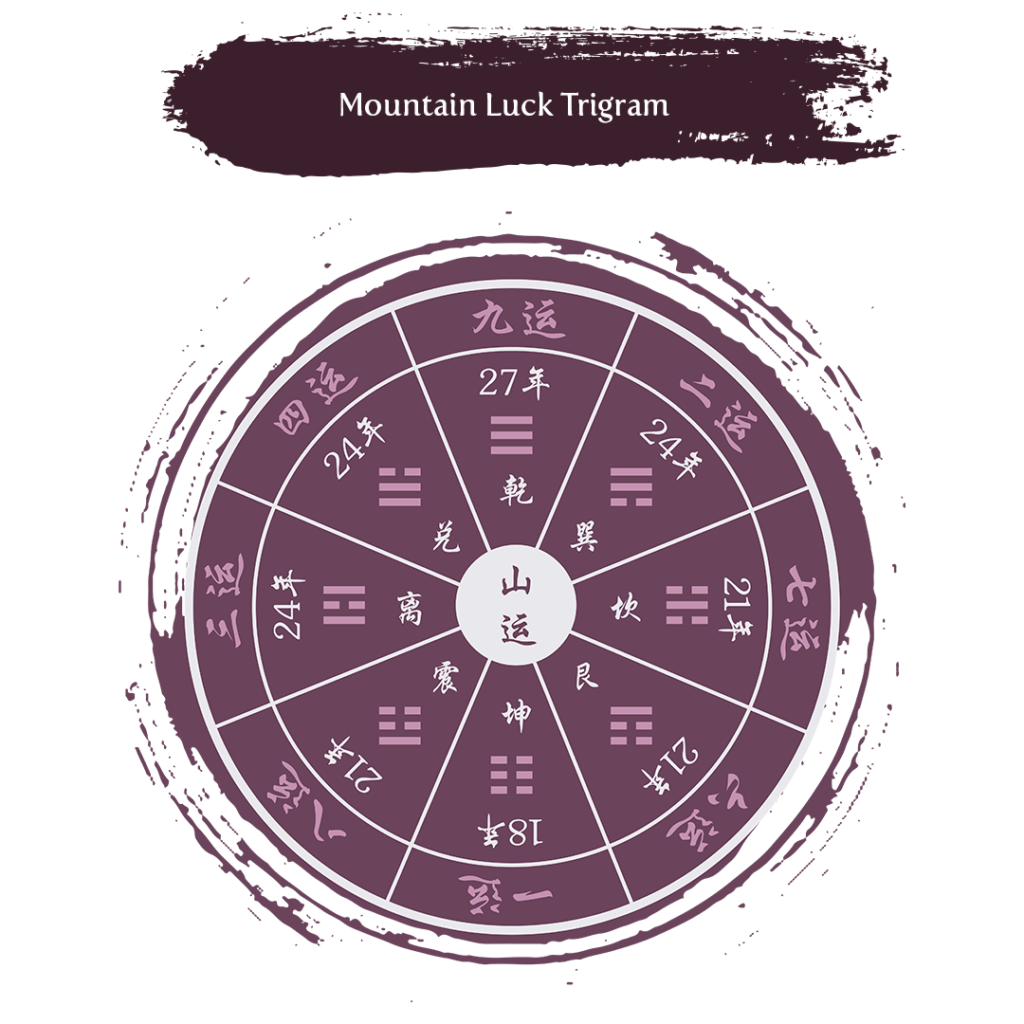 Mountain luck diagram illustrating the Early Heaven Ba Gua, the Feng Shui period and the number of years in each period. 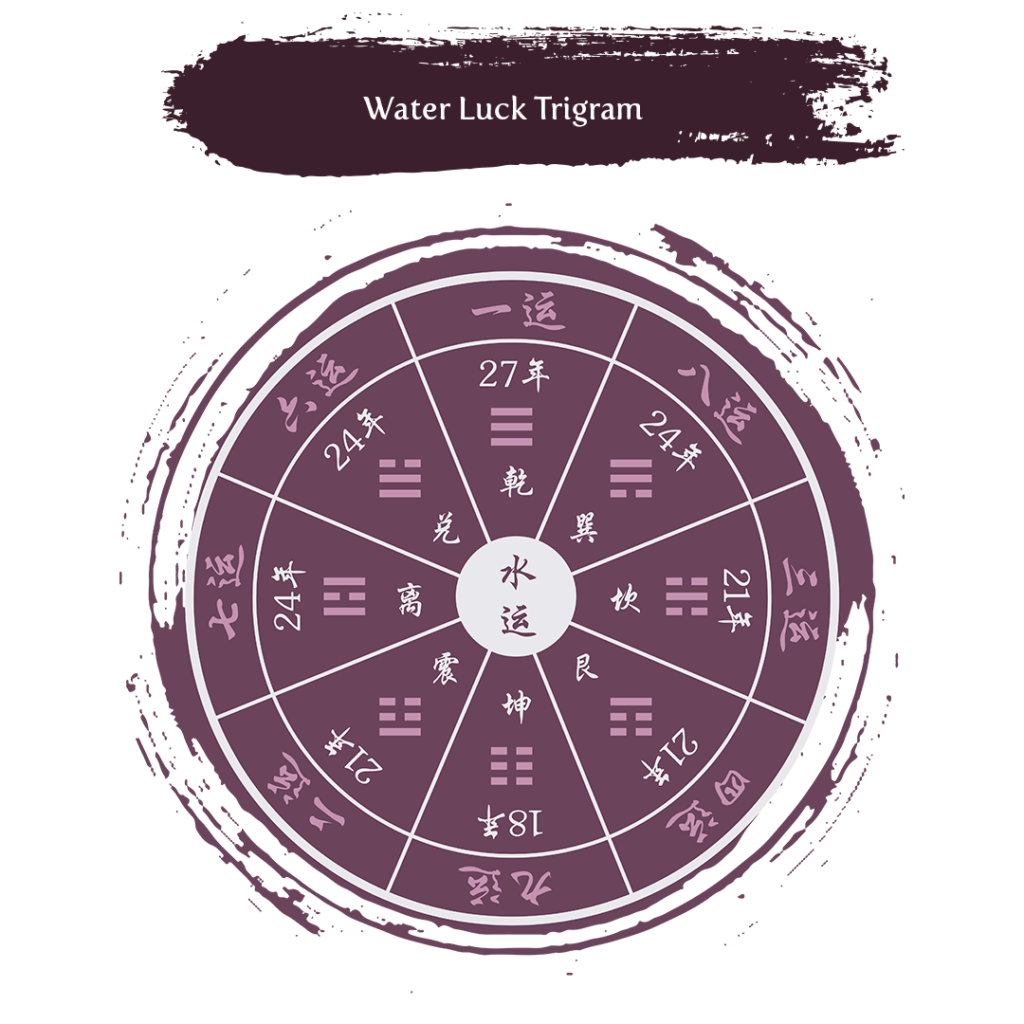 Water luck diagram illustrating the Early Heaven Ba Gua, the Feng Shui period and the number of years in each period.

This explains why Period 9 mountain luck (Early Heaven Luck) started back in 2017 and hence is under the influence of Period 9 flying stars.

We are now well into the Early Heaven Luck of Period 9, which has been in effect since 2017. Activating the Period 9 wealth star is of paramount importance in order to gain powerful benefactors, maximise wealth potential and thrive in the Period 9 economy.

In the 2022 Annual Flying Star Chart, Master David demonstrates that Star #9 (右弼) and Star #1 Greedy Wolf (贪狼) have flown to the South and North Sectors respectively.

To safeguard Master David’s family trade secrets, not all information will be revealed in our blog article. Exclusive insights will be reserved for clients who book a complimentary Period 9 Feng Shui consultation.