Posted by Imperial Harvest on 17 February 2022

In the annals of Chinese history, Tua Pek Gong was a top government official serving in the imperial court during the Zhou dynasty. In his duties to the court, he mainly oversaw taxation and other financial matters. His financial acumen, authority and undertaking of a myriad of economy-based duties was deeply respected by the people he served. Eventually, Tua Pek Gong came to be heavily associated with career success, leading to his deification as the Career Wealth God. 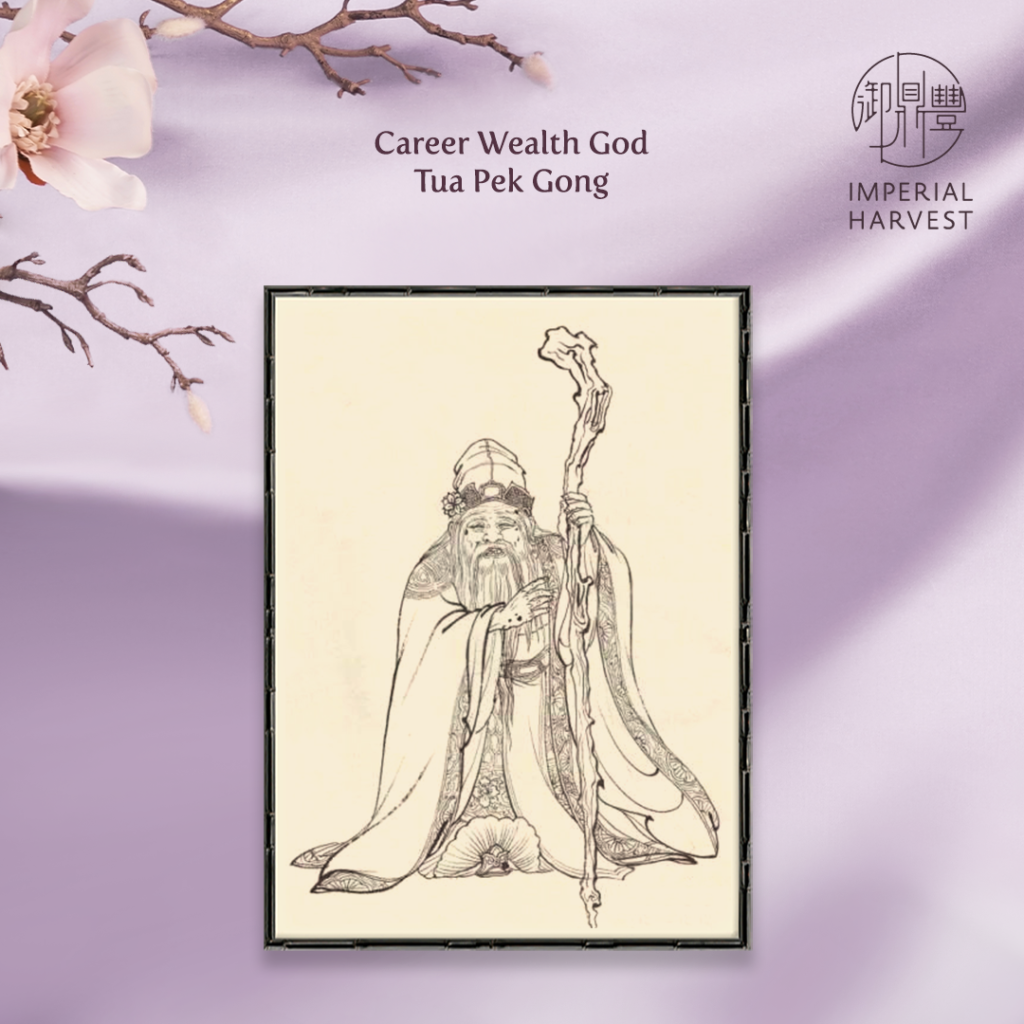 As one of the most formidable manifestations of auspicious luck and wealth in Chinese culture, the Career Wealth God Tua Pek Gong — alongside the Grand Wealth God Bi Gan and the Business Wealth God Guan Gong — make up the trio of deities especially sought after during major events in the Chinese calendar, such as the Lunar New Year.

The year of the Water Tiger presents a golden opportunity to jumpstart a prosperous year with the guidance and support of Tua Pek Gong. One of the most powerful direct wealth gods, Tua Pek Gong plays a big part during Lunar New Year celebrations, during which people pray to the deity to wish for good luck and prosperity for the new year.

Worshipped as the Career God of Wealth, his guidance is prudent for those working towards massive career breakthroughs. Attracting powerful benefactor support to his devotees, his influence empowers his devotees to climb to the top echelons of the corporate ladder. 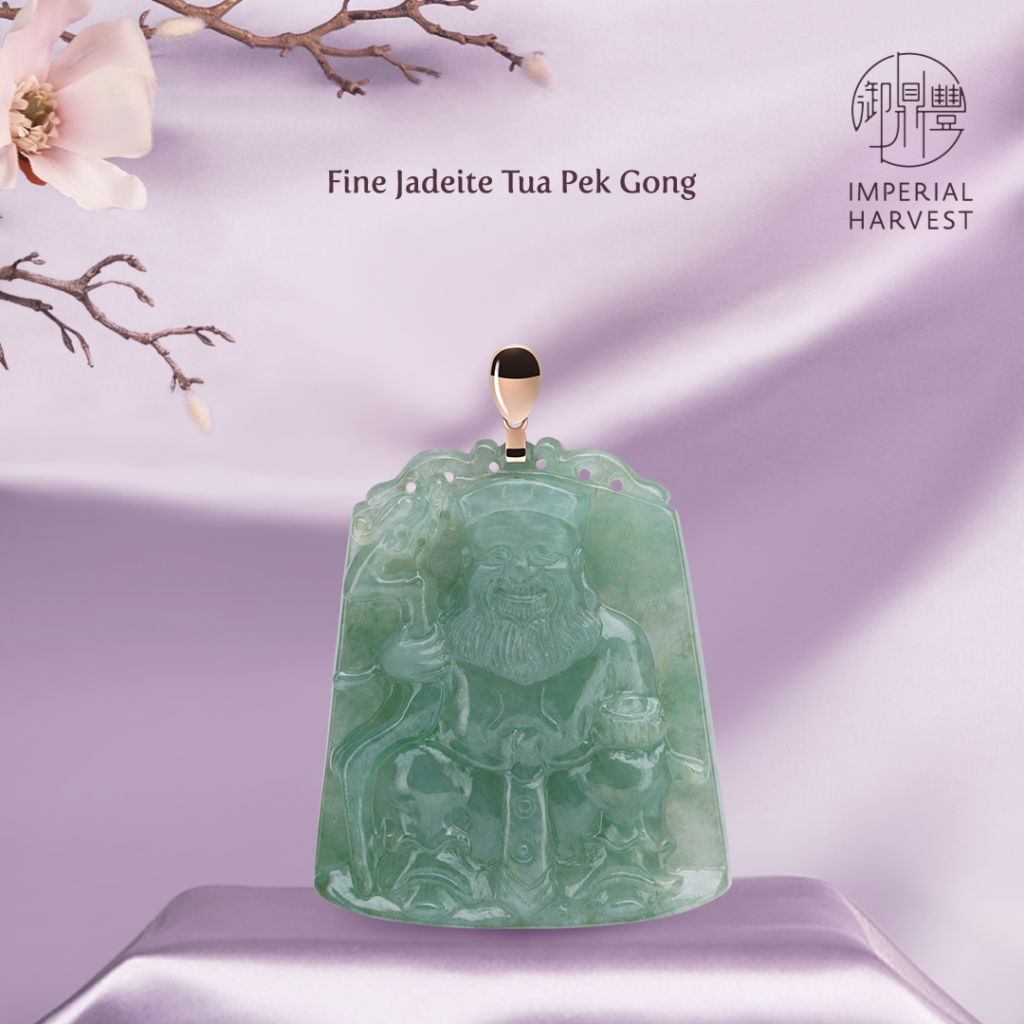 For those seeking a prosperous beginning to the year of the Water Tiger, the Fine Jadeite Tua Pek Gong is an exquisite addition to the Imperial Feng Shui treasures at your fingertips. Ideal for those looking for massive breakthroughs in their careers this year, it attracts benefactor and mentor support, strategic opportunities for career advancement and growth — ultimately aiding its destined wearer to rise to the top tiers of their fields and industries.

In conceptualising Imperial Harvest’s Fine Jadeite Tua Pek Gong, Master David designed a formidable depiction of Career Wealth God, with every feature specifically designed to powerfully usher in massive wealth and prosperity to its destined owner. The Fine Jadeite Tua Pek Gong also proves beneficial to those embarking on new careers, accelerating the realisation of their career aspirations, supplementing it with smooth progressions and glowing appraisals.

Imperial Harvest’s Fine Jadeite Career Wealth God is meticulously hand-finished by master artisans, each displaying a wealth of multi-generational technique and expertise in their craft. The intricacy that defines each Imperial Harvest treasure follows a series of precise design specifications established by Master David, allowing for the maintenance of the highest quality control standards. The meticulous application of jadeite cutting, carving and polishing techniques as exhibited by our team of artisanal masters allow each treasure to achieve the highest levels of craftsmanship. 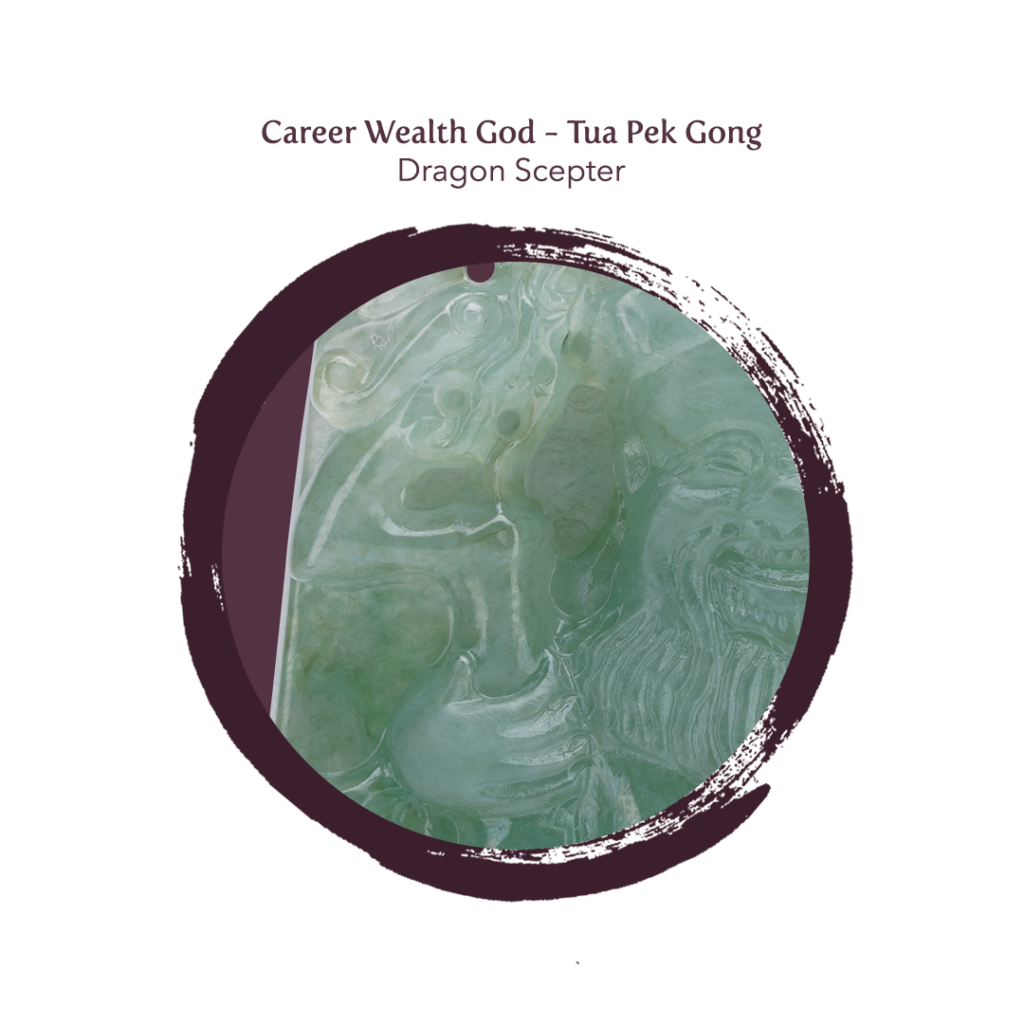 According to legend, the Dragon Scepter wielded by Tua Pek Gong was carved out of China’s most precious gemstones — Jadeite.

The image of the dragon is synonymous with the legendary, mythical creature that embodies the authority, power and wisdom of ancient Chinese emperors. Highly revered as an auspicious emblem, Chinese emperors had motifs of this heavenly creature embroidered on their robes, embossed on their thrones and in nearly every corner of the imperial palace.

Perched on the top of the Dragon Scepter, the dragon head breathes out its heavenly flames (三昧真火) to usher monumental career breakthroughs to its destined wearer. It eliminates their corporate competitors and obstacles standing in their paths towards prosperity and success while commanding the valuable support of benefactors to help achieve rapid breakthroughs and triumphs. 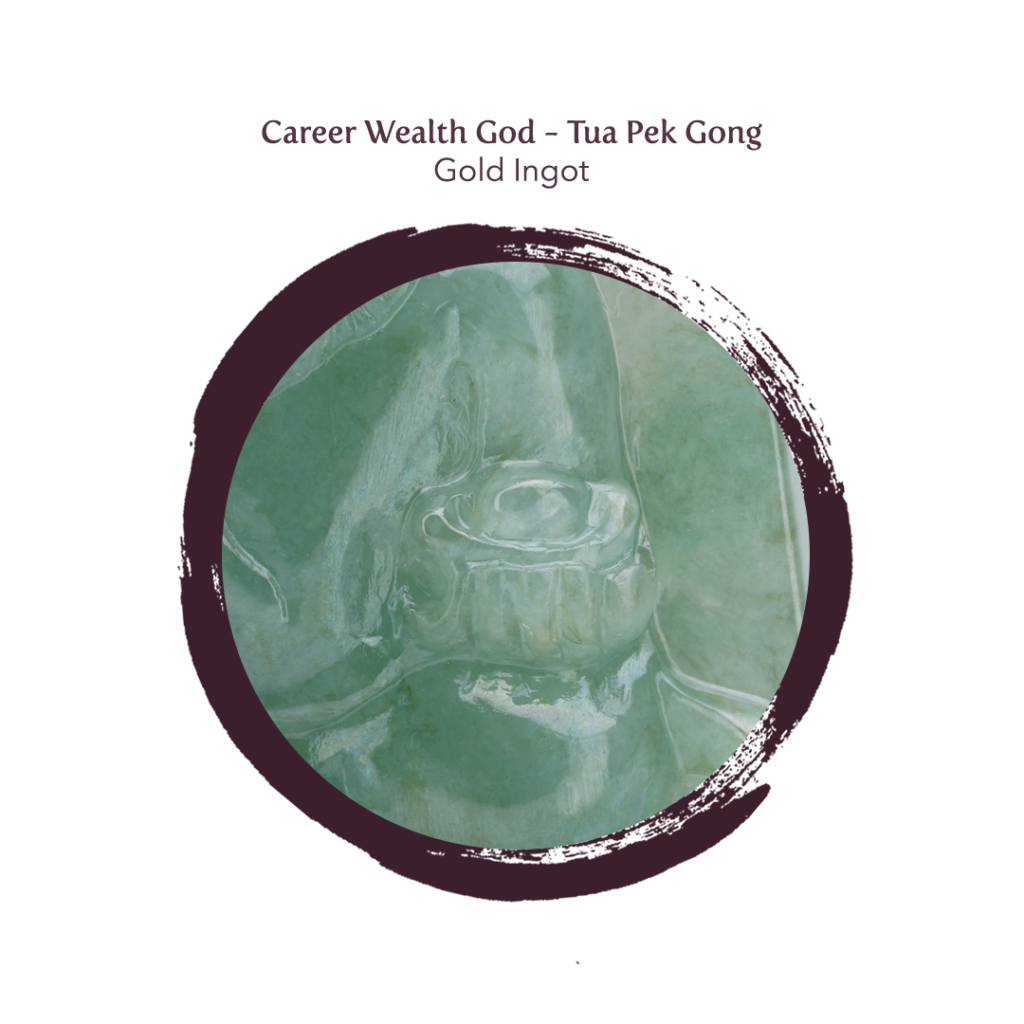 An image symbolic of material wealth, the abundance of gold and prosperity, the gold ingot is a powerful manifestation of never-ending abundance and wealth. A powerful wealth enabler, the gold ingot is the ultimate emblem to attract strategic career opportunities, benefactors and mentors within the workplace, as well as attractive salary increments.

For those who seek a prosperous career in the Year of the Water Tiger, the gold ingot empowers its destined wearers to fulfil and exceed their career goals and aspirations. 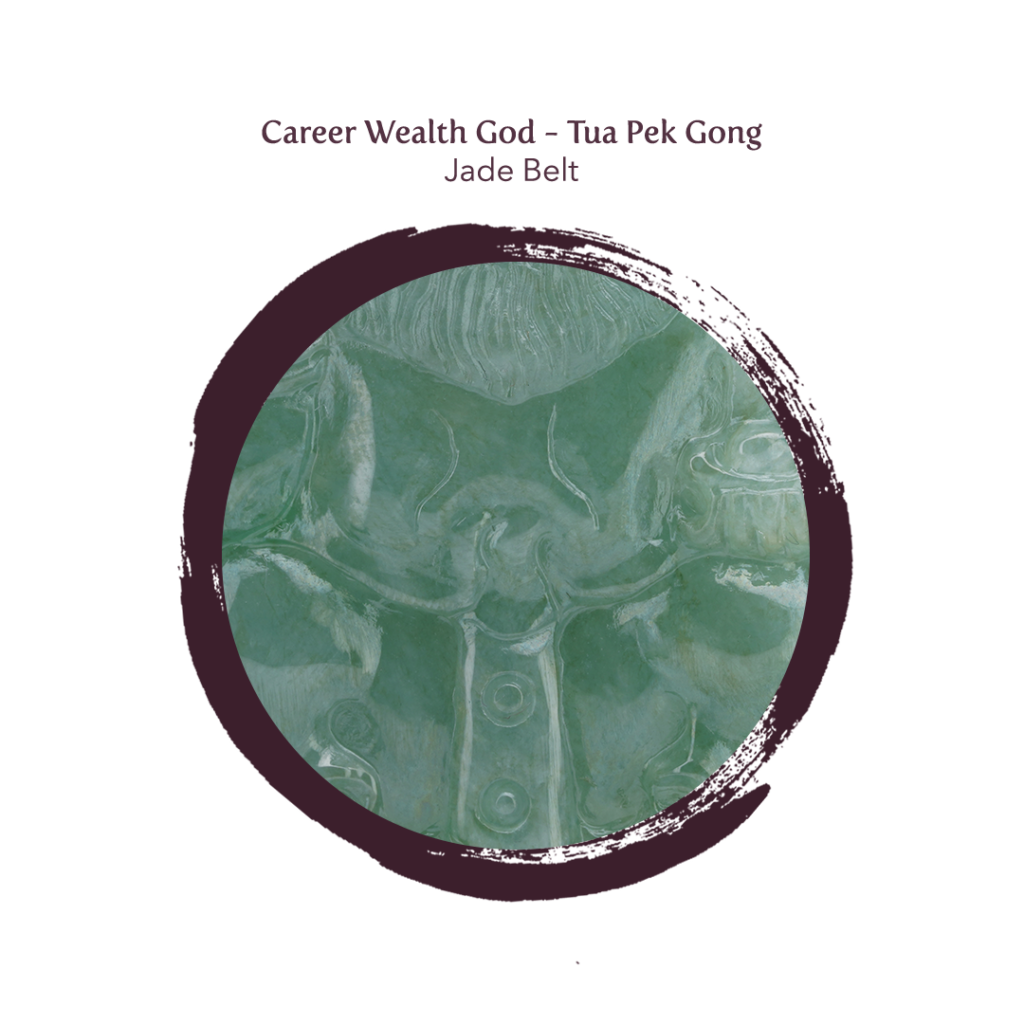 In the imperial courts of dynastic China, the jade belt was thought to be an important status symbol, indicative of authority and prestige, donned by the high-ranking government officials serving in the court.

Reflective of how the jade belt embraced the waists of the wealthy officials, this important wealth enabler commands power and authority for the blessed wearer. For its destined owner, the Jade Belt ushers excellent career progression opportunities, as well as power and authority within the workplace.

The year of the Water Tiger proves to be an especially promising one for Imperial Harvest’s family of blessed clients, with the Fine Jadeite Tua Pek Gong bringing phenomenal growth and career success.