Posted by Imperial Harvest on 11 September 2020

The Legendary Designs of The Imperial White Inkstone – Part 1

Fine art is an important pillar of Chinese culture, of all the art forms borne out of this rich and multifaceted cultural landscape, Chinese painting and calligraphy are considered to be the finest.

There are two broad categories of Chinese classical paintings; that of the scholar-officials and that of professional artists. The paintings of the literati or scholar-officials were often a reflection of their inner-thoughts, these paintings feature expressive brushwork, and are often complemented with an inscription.

Due to their influential position in society, literati paintings are highly revered and sought after by fine art collectors even in the modern day. 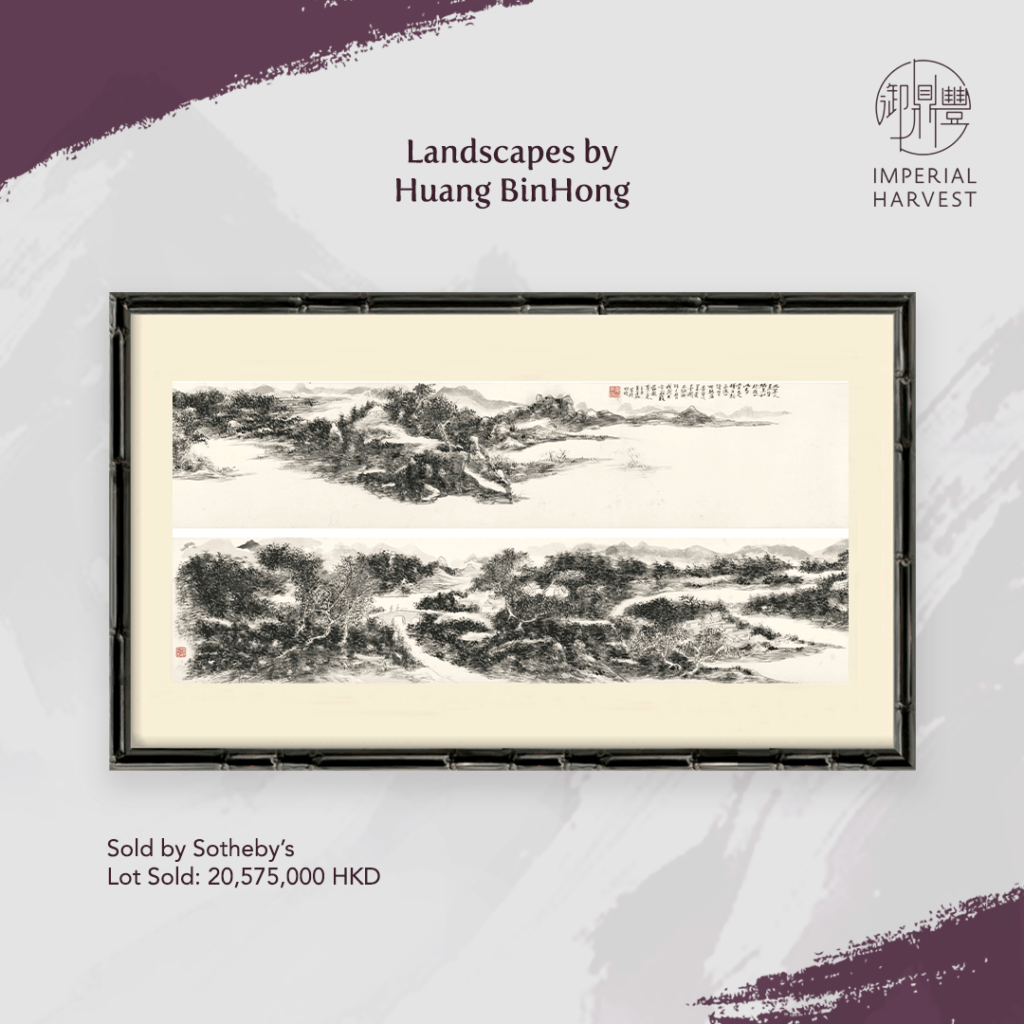 Imperial White Ink Stone is the emperor grade category of ink stones exclusively reserved for Chinese Emperors. White is the rarest colour found in the category of Duanxi Ink Stones as only 0.02% of the Ink Stones mined are white.

As an avid enthusiast of fine arts and Imperial Feng Shui, Emperor Qian Long commissioned and designed a variety of Ink Stones with ancient and classical styles with references from previous dynasties and inscriptions of his poetry.

To maintain the integrity of the precious ink stones, Imperial artisans applied the techniques of Chinese calligraphy and ink wash painting on ink stones using fine engraving methods, which became what is known as the Imperial standard for ink stones production.

Master David commissioned only the most experienced artisans to engrave his signature designs on the Imperial White Ink Stone using the Imperial standard. The designs are influenced by the paintings of famous Chinese artists and results in the perfect marriage between Chinese fine arts and Imperial Feng Shui heritage.

It is a time-consuming process as it can take more than a month, from designing to carving the Imperial White Ink Stone. Despite the tedious process, Master David is committed to present only the finest Imperial Feng Shui treasures to the world. 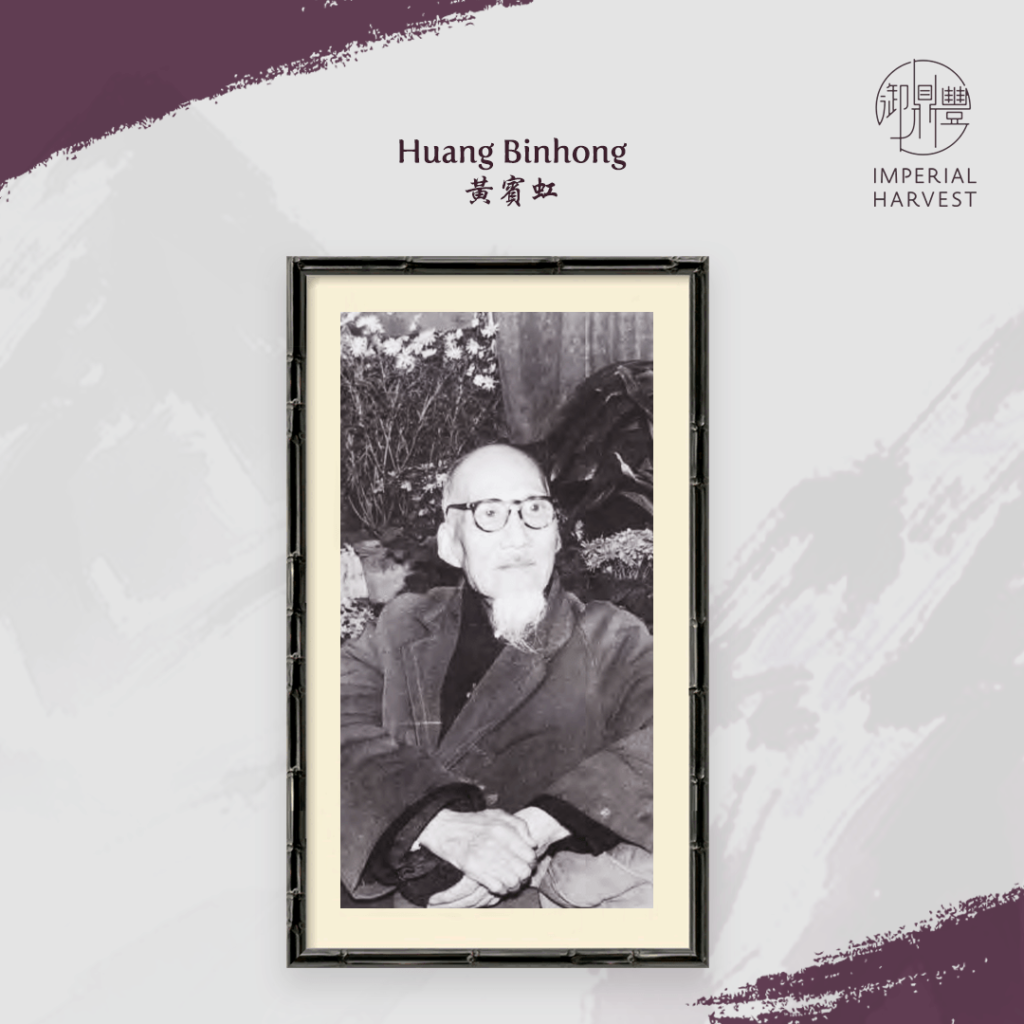 Huang Binhong (黃賓虹) was a Chinese literati painter and art historian born in Jinhua, Zhejiang province in 1865. He is considered as one of the last innovators in the literati style of painting and is widely acclaimed for his freehand landscapes.

Landscape is also known as Shan Shui (山水), where mountains, rivers and waterfalls are prominent in this art form.

Huang Binhong had exceptional skill in the manipulation of brush and ink as well as an understanding of positive and negative spaces that emphasised the abstract nature of brushwork and the internal beauty it created. 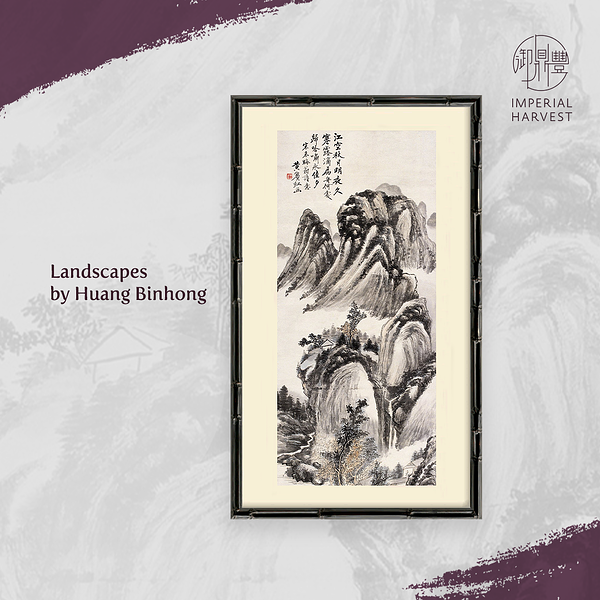 In his fifties, he sought to learn from the works of ancient masters and in the next decade he travelled widely throughout China to admire and study the splendour of nature. It is widely believed that Huang’s unique style only crystallised in his seventies. His landscapes bear tribute to the landscapes of the Northern Song dynasty.

Advocating ‘learning from past masters’, as well as from nature, Huang Bin Hong’s artworks captured the spirit and essences of nature at its very best. 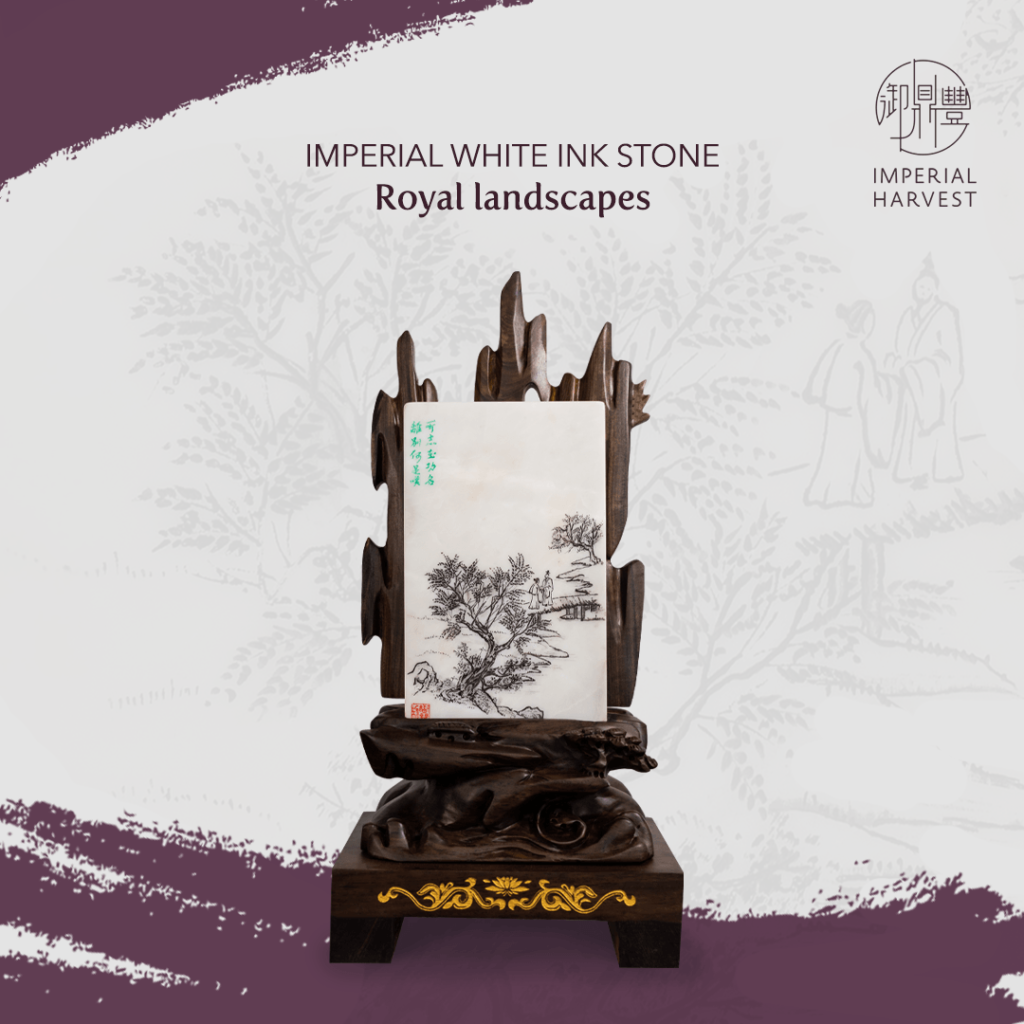 Landscape is widely known to be the highest form of Chinese painting and the epitome of Imperial Feng Shui art. Drawing inspiration from the legendary landscape painter, Master David’s style of landscape painting is the achievement of dense and cohesive structures and a balance of tonal variations in the mountains and trees.

Drawing references from Huang Binhong’s landscape paintings, the importance of the positive and negative space is replicated on the Imperial White Ink Stone. Precise and different angles of strokes were used in the paintings, portraying a painting of careful synthesis and sketch-like spontaneity, just as how Huang Binhong described paintings that played with dark and light shades – ‘the order of disorder’. 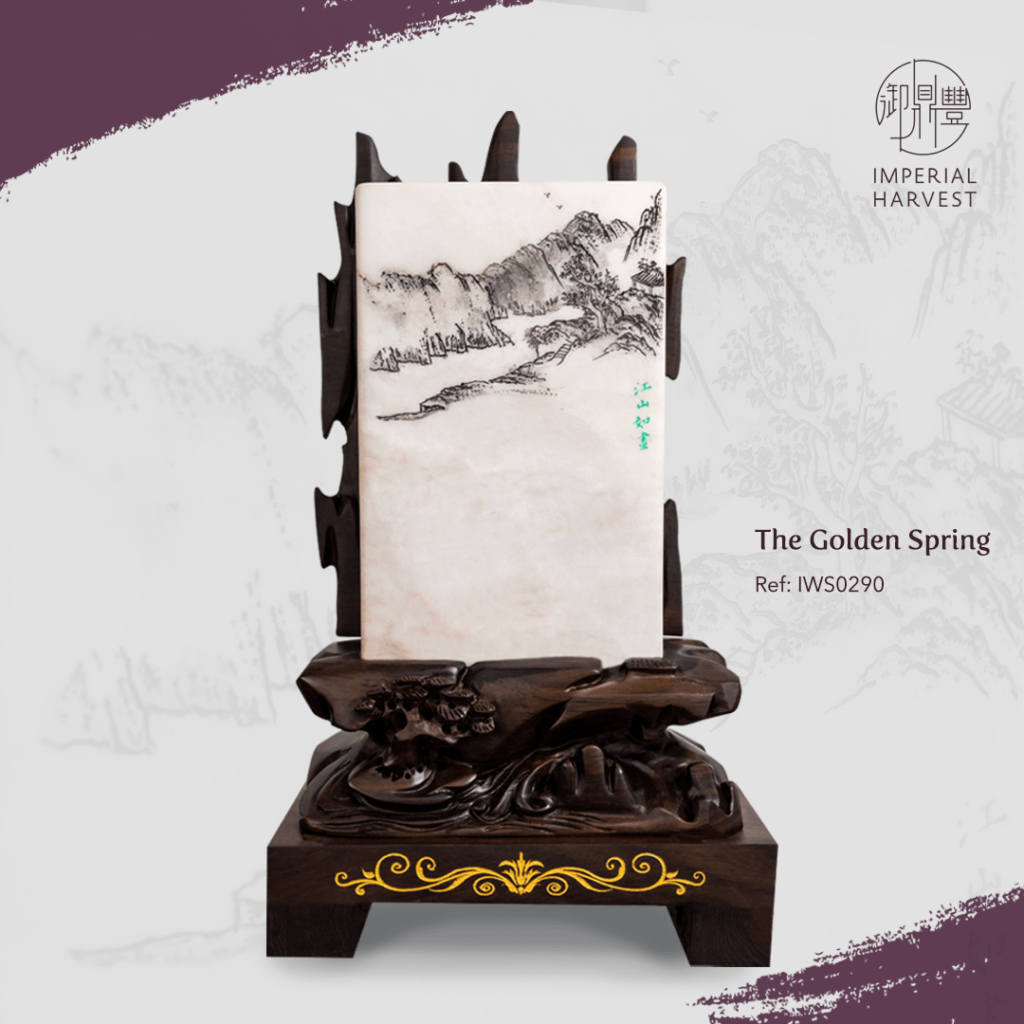 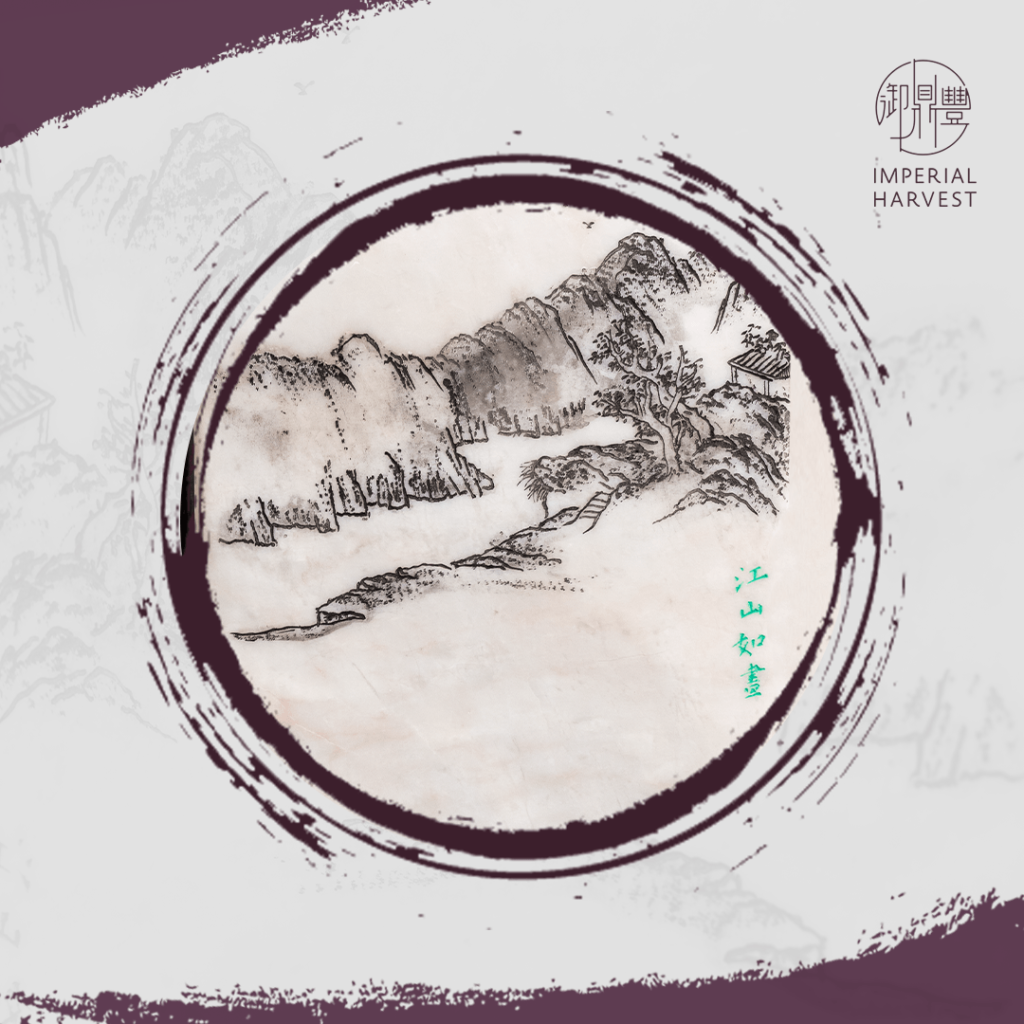 The painting depicts a setting of a lone, meandering channel running through sombre mountains, which evokes tranquility and a quiet afternoon in Spring. The Chinese idiom 江山如畫 means ‘Picturesque’, often used when describing a beautiful sierra in its most natural and purest state. 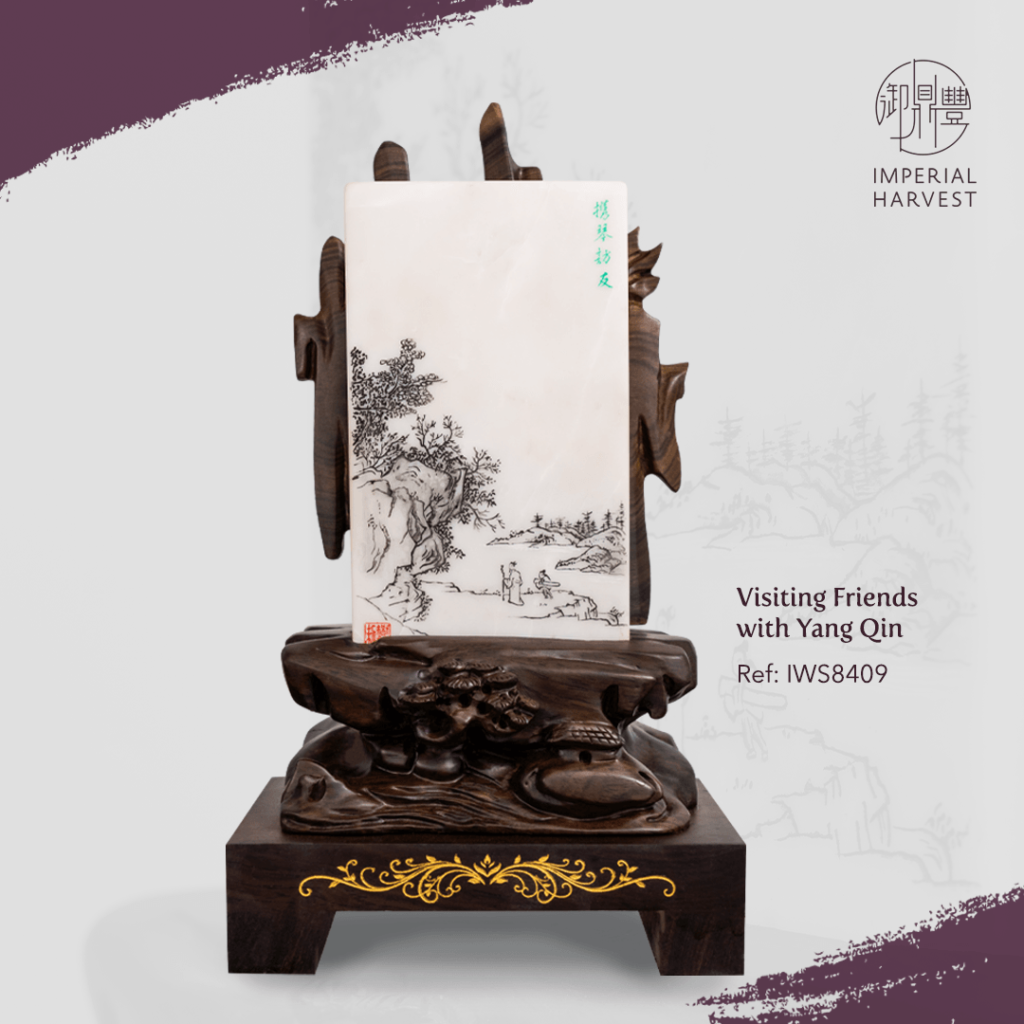 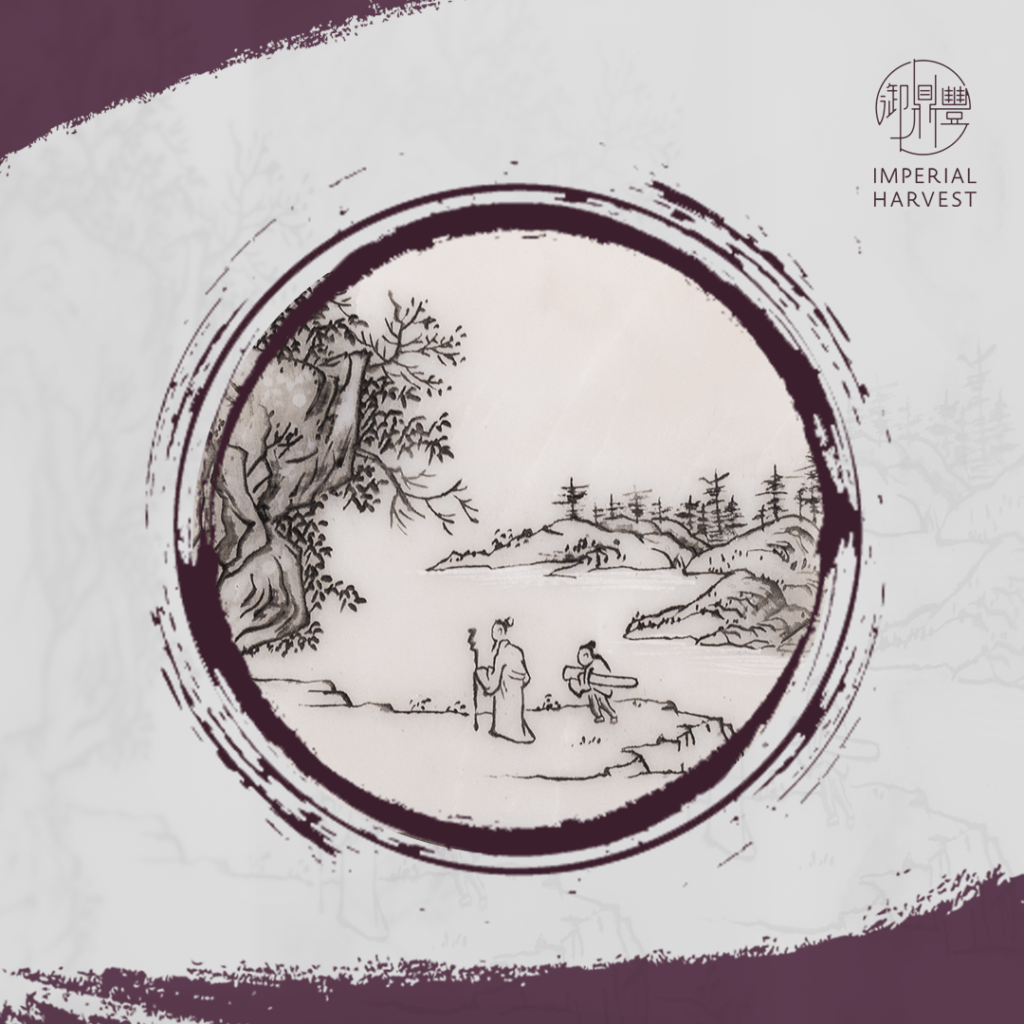 A popular painting, 携琴访友 from the 16th century is depicted on this Imperial White Ink Stone. The composition depicts an old man and a child carrying a Yang Qin (Chinese Hammered Dulcimer) alongside High Mountains and Flowing Water. 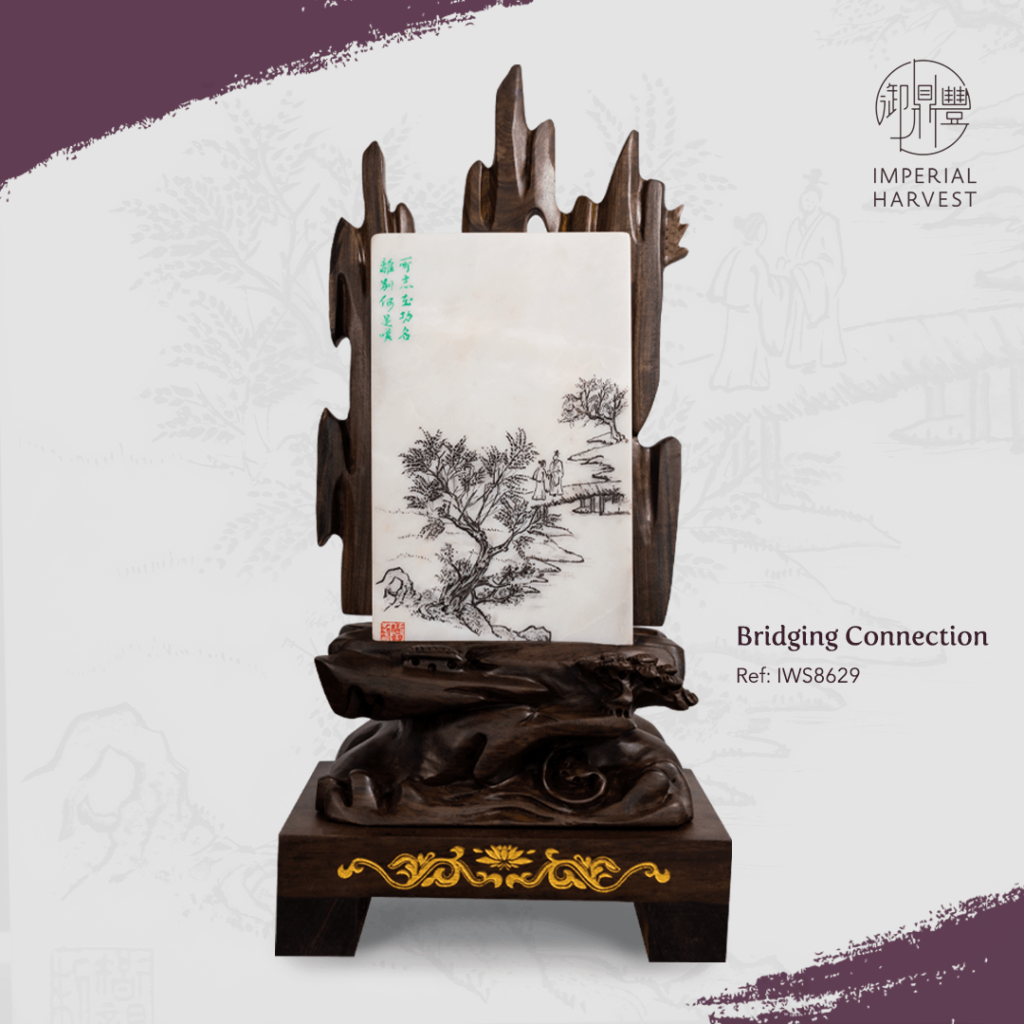 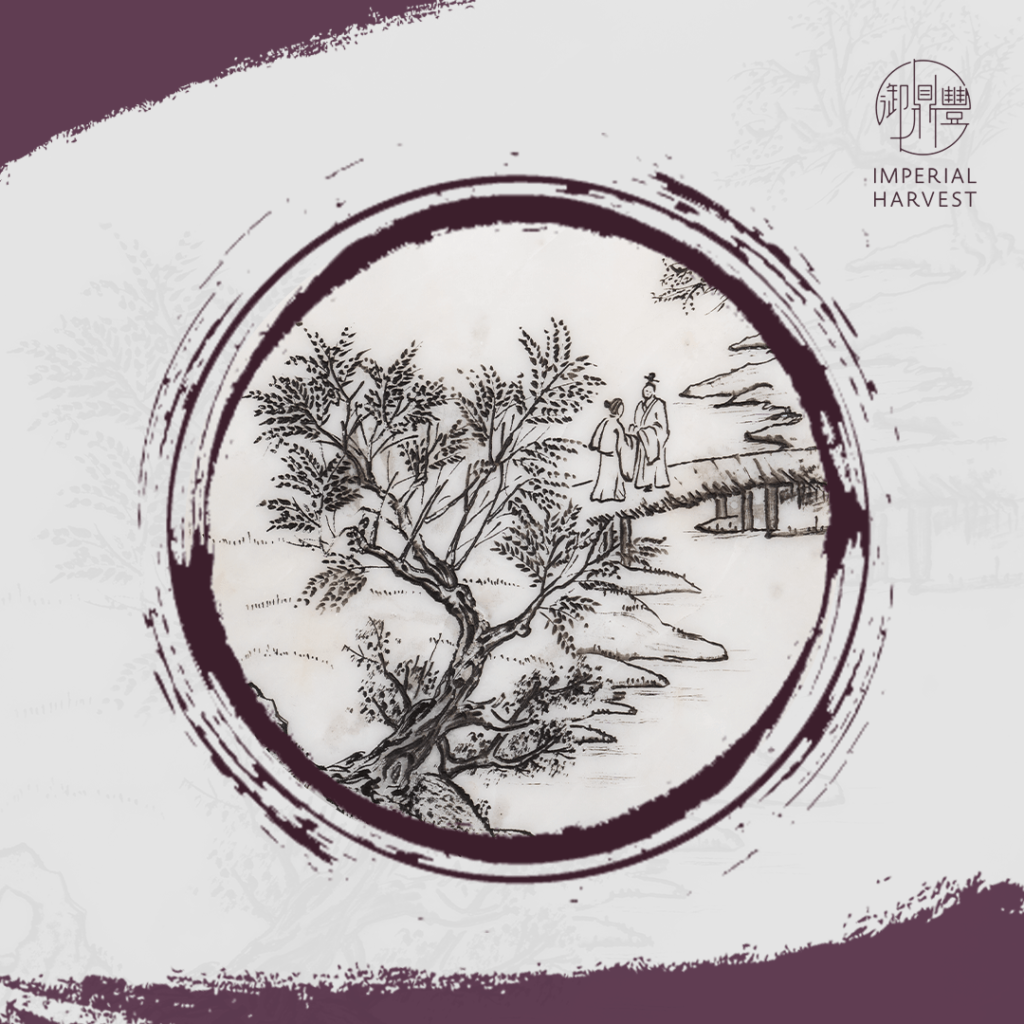 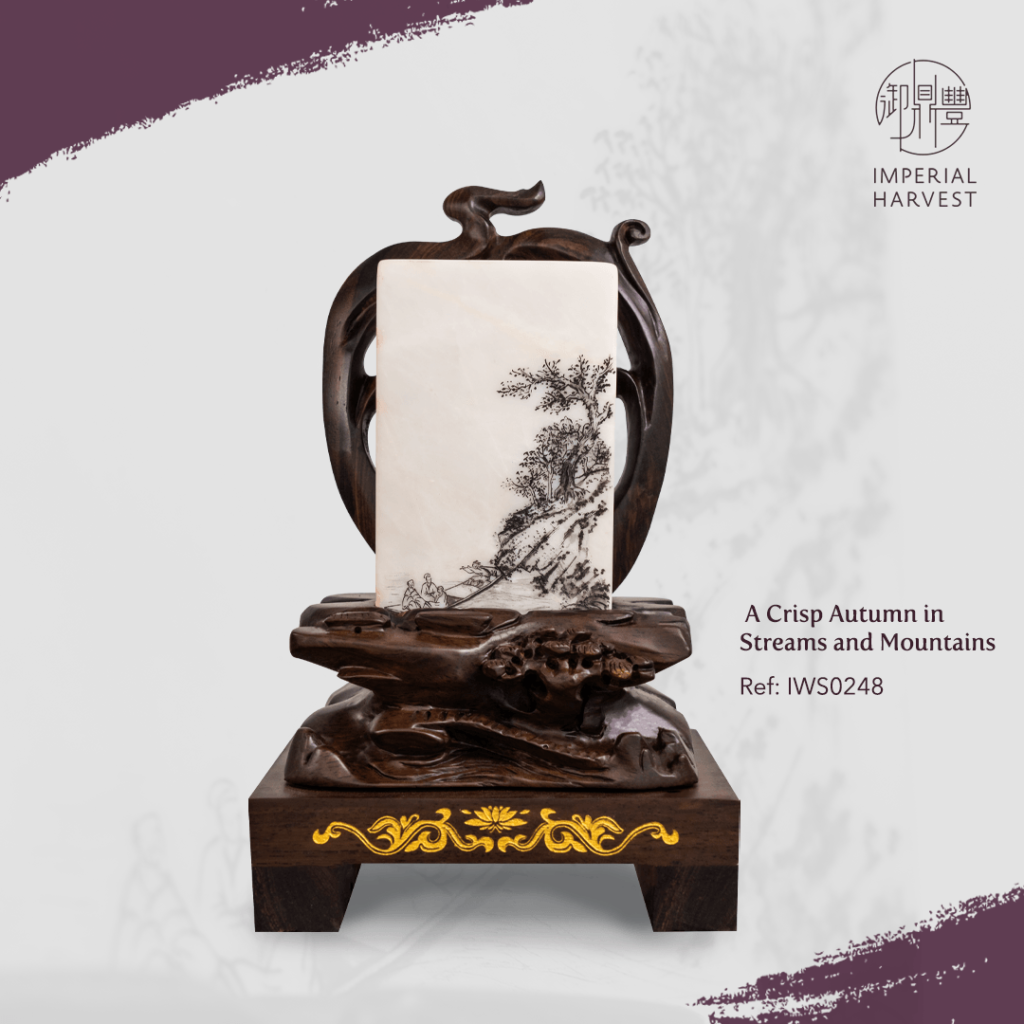 A Crisp Autumn in Streams and Mountains 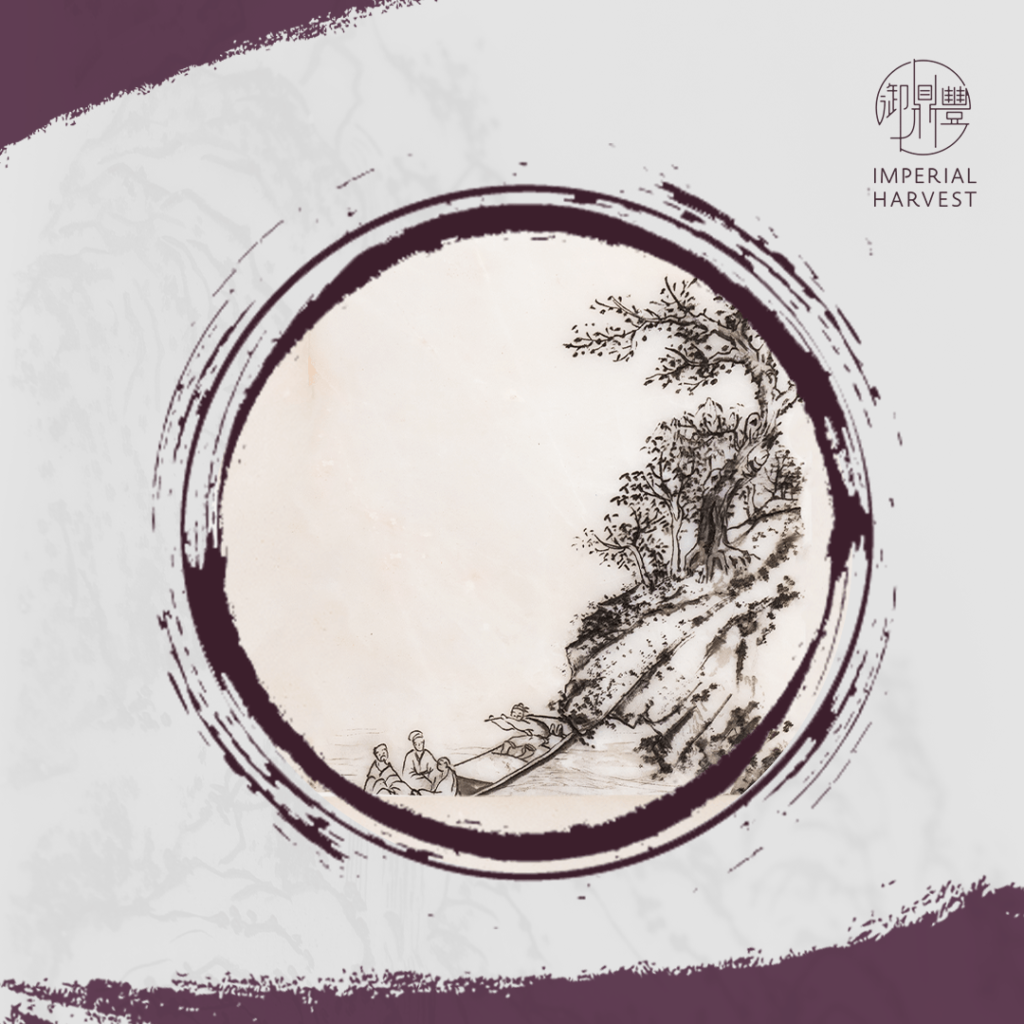 Autumn is one of the most beautiful seasons of the year. As leaves begin to fall from the trees, friends and families begin their journey to reunite before the yearly harvests. Berries emerge, embracing the autumnal air just as blooms entwine in the spring, as if nature begins to call out, and the trees can’t help but become towering blossoms of flamed foliage, dancing down from the skies. 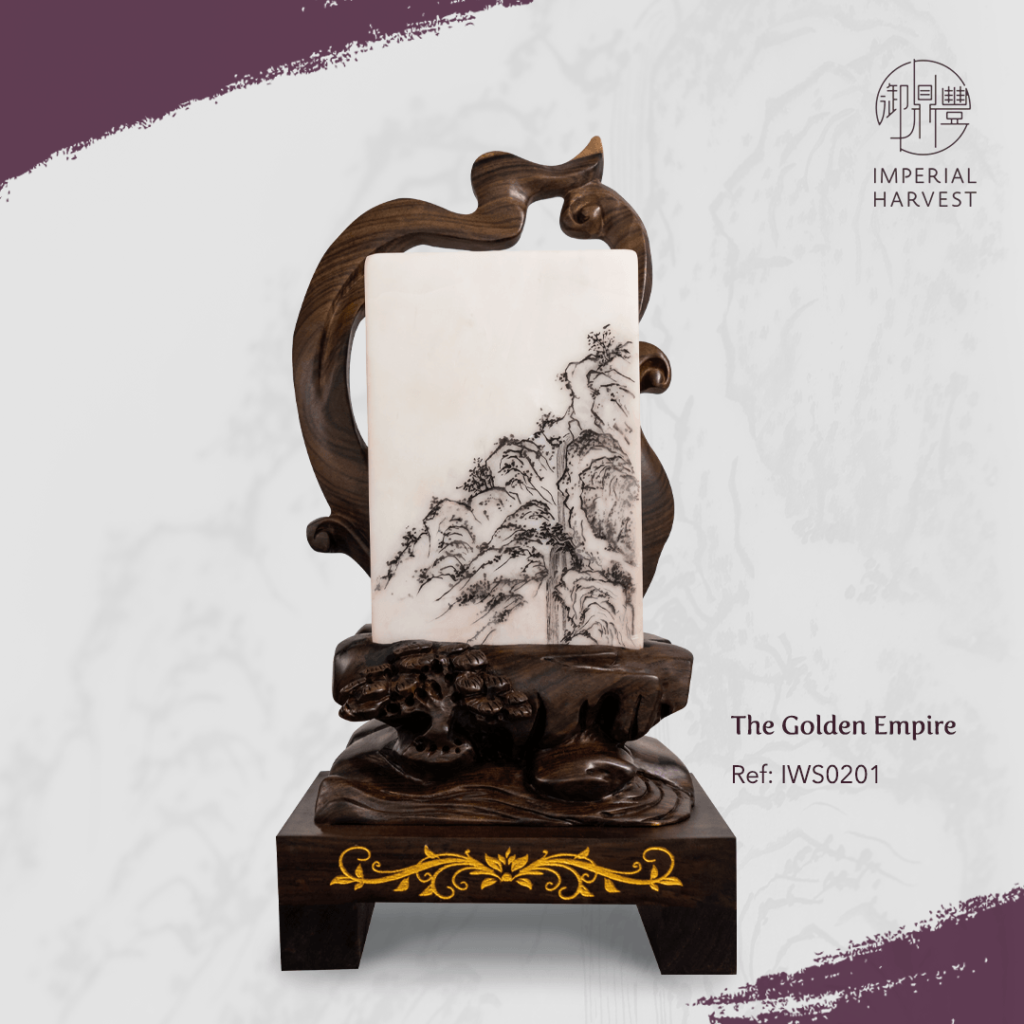 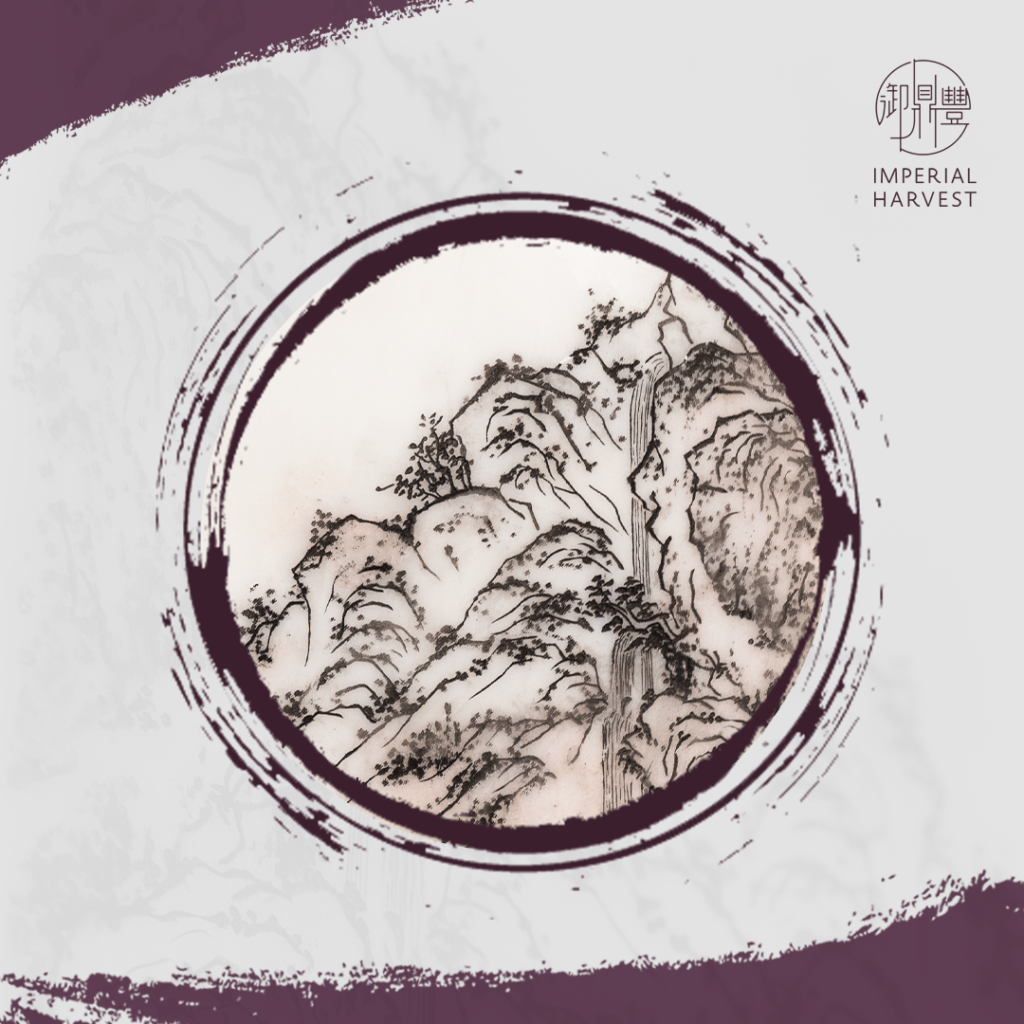 The Golden Empire depicts highland mountains in Northern China that are peaking out towards the skies, laid in a great line like the spine of the land, serving as the foundation for trees and shrubs, grass and ferns. Water from the heavens cascades down a series of rocky outcrops; a stream of slow-flowing liquid, descending gently, languid in pace.

The Legendary Designs of the Imperial White Ink Stone – Part 2

The Legendary Designs of the Imperial White Ink Stone – Part 3