Posted by Imperial Harvest on 07 January 2022

In 2022, Imperial Harvest is honoured to present the all-new Imperial White Inkstone and Qian Long Wishing Stone Collection for the year of Water Tiger.

The Imperial White Inkstone is among the most potent activators of the authority star. According to the findings of pioneering Imperial Feng Shui masters in dynastic Chinese history, they possess the potent ability of “一白遮三丑, 一旺挡三煞” which translated literally, means that they promote the auspicious energy of one sector while countering three inauspicious sectors.

This makes the Imperial White Inkstone one of the most versatile and multi-functional tools in the array of Imperial Feng Shui treasures. 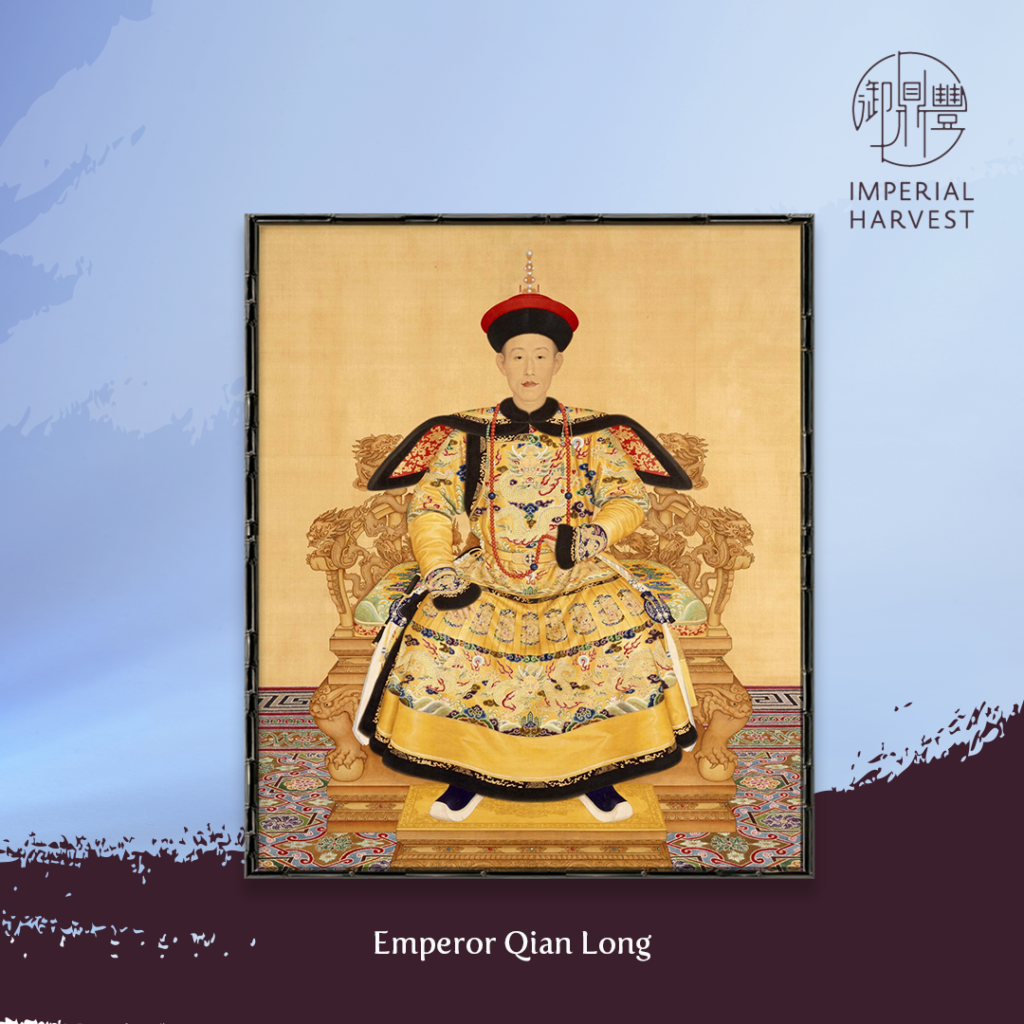 Today at Imperial Harvest, these fine Imperial Feng Shui treasures share the same grade and provenance as those embraced by Emperor Qian Long centuries ago, holding the key to unlocking wealth, power and authority of the homes and offices of blessed clients. 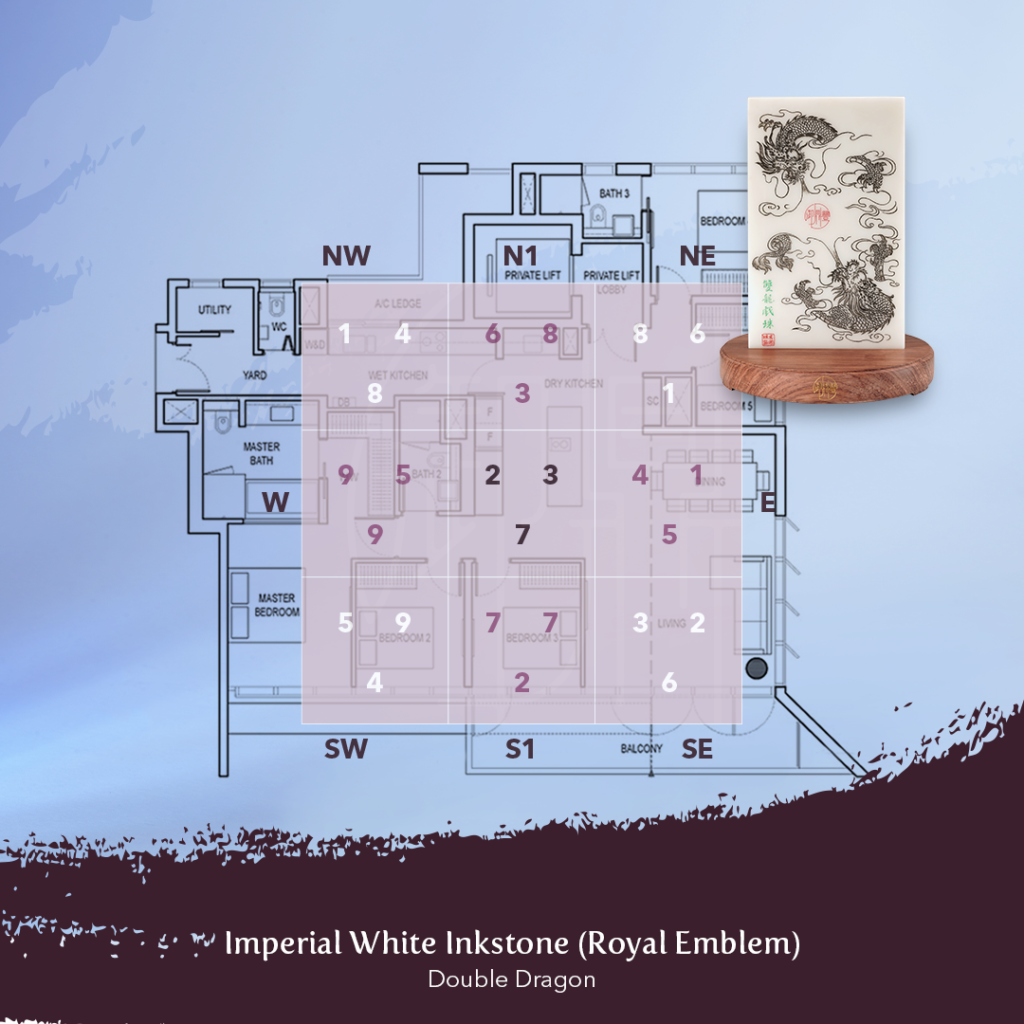 Designed to activate the natal authority star (Martial Arts 武曲星), the Imperial White Inkstone collection (Royal Emblem) consists of the most auspicious mythical and legendary creatures in the Chinese pantheon, hand-engraved by master artisans with multi-generational expertise and experience.

The intricate ink-like detailing consists of three distinct pairings of the most mythical and legendary creatures in the ancient Chinese pantheon, each stylised into a respectful, yet elaborate motif of auspiciousness. 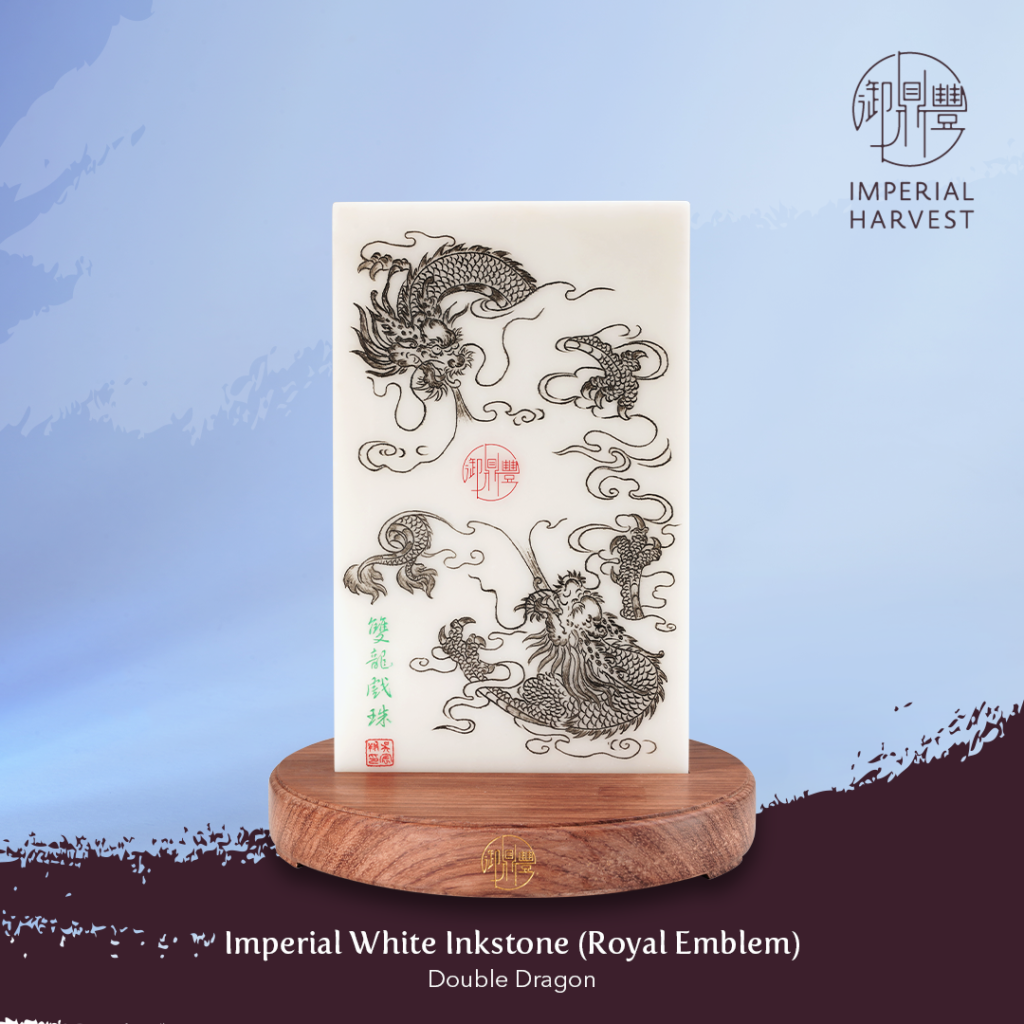 The first is a double-dragon design, which focuses on the legendary mythical creature that embodies the authority, power and wisdom of ancient Chinese emperors. 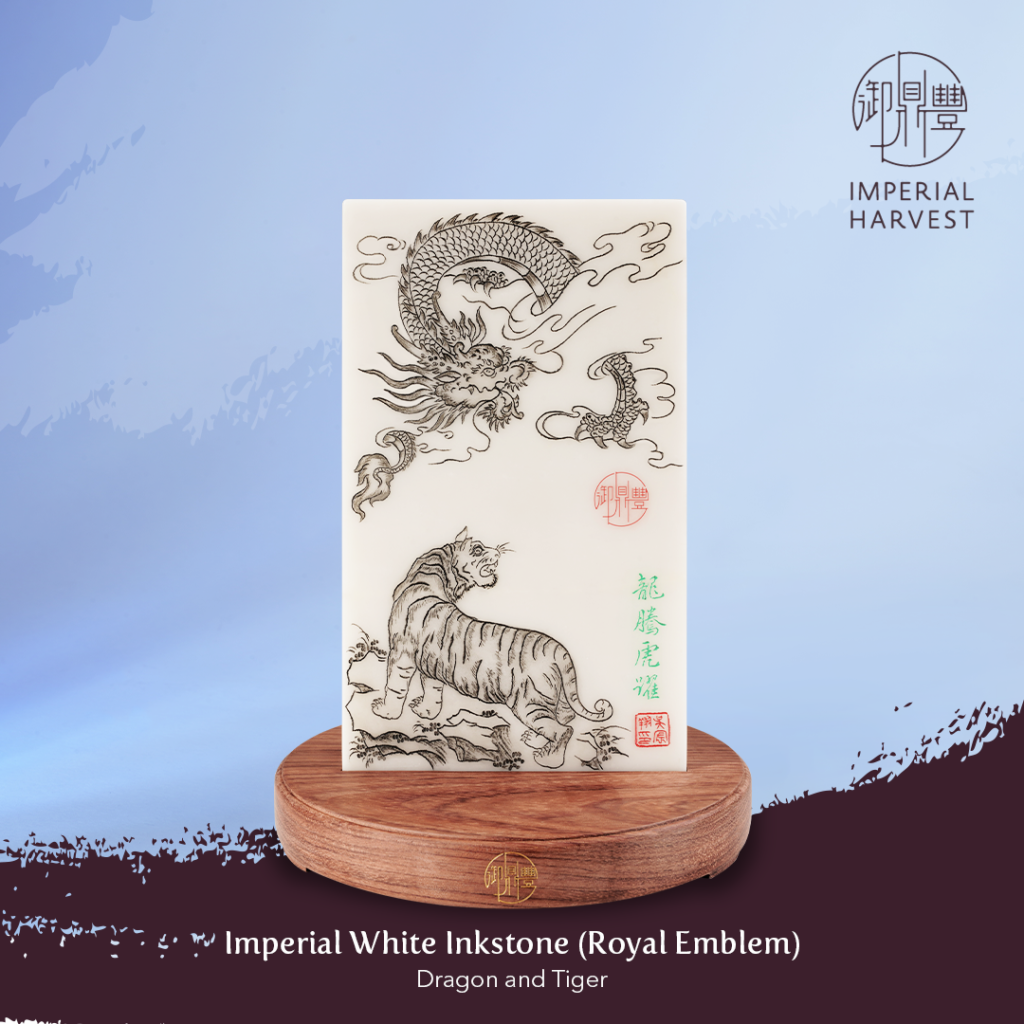 Next, the dragon and tiger series features the king of animals, as suggested by its distinctive forehead markings forming the outline of “王”, the Chinese character for “king”. In Chinese folklore, the tiger protects all that is upright and good, while granting protection from different disasters, such as fires or thieves. 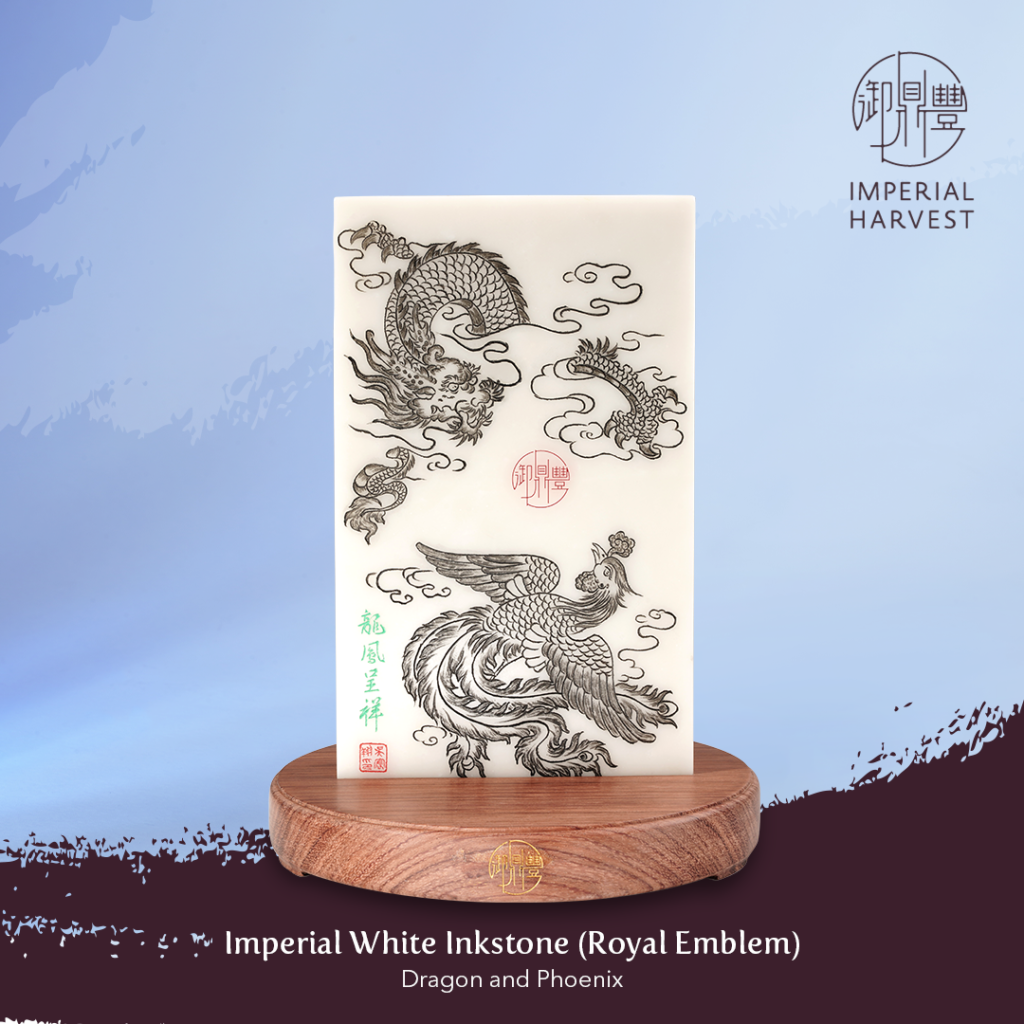 The last series features the dragon and phoenix, with these two mythical creatures naturally complementing each other. Culturally, the phoenix is closely associated with the empress whereas the dragon’s image is often related to the emperor. The phoenix’s presence alongside the dragon conveys a yin-yang representation of balance and completeness within the home of the destined owner.

These classic imperial symbols of power and prosperity were commonplace in the landscape of ancient China, meshing and melding seamlessly with both oriental and global art techniques such as pointillism, showcasing the diversity of detail on these truly inclusive canvases of art.

Upon finalisation of design sketches, Imperial Harvest’s team of experienced artisans cut, carve and mold the inkstones according to the most precise proportions and designs. Pairing unrivalled expertise with the most cutting-edge, specialised tools allows for the carving of the most minute details with meticulous precision and care.

The subsequent polishing of each Royal Emblem Imperial White Inkstone highlights its distinctive design elements and accentuates its unique proportions. This is done by hand using the free-floating technique which unfailingly produces a smooth, blemish-free surface. 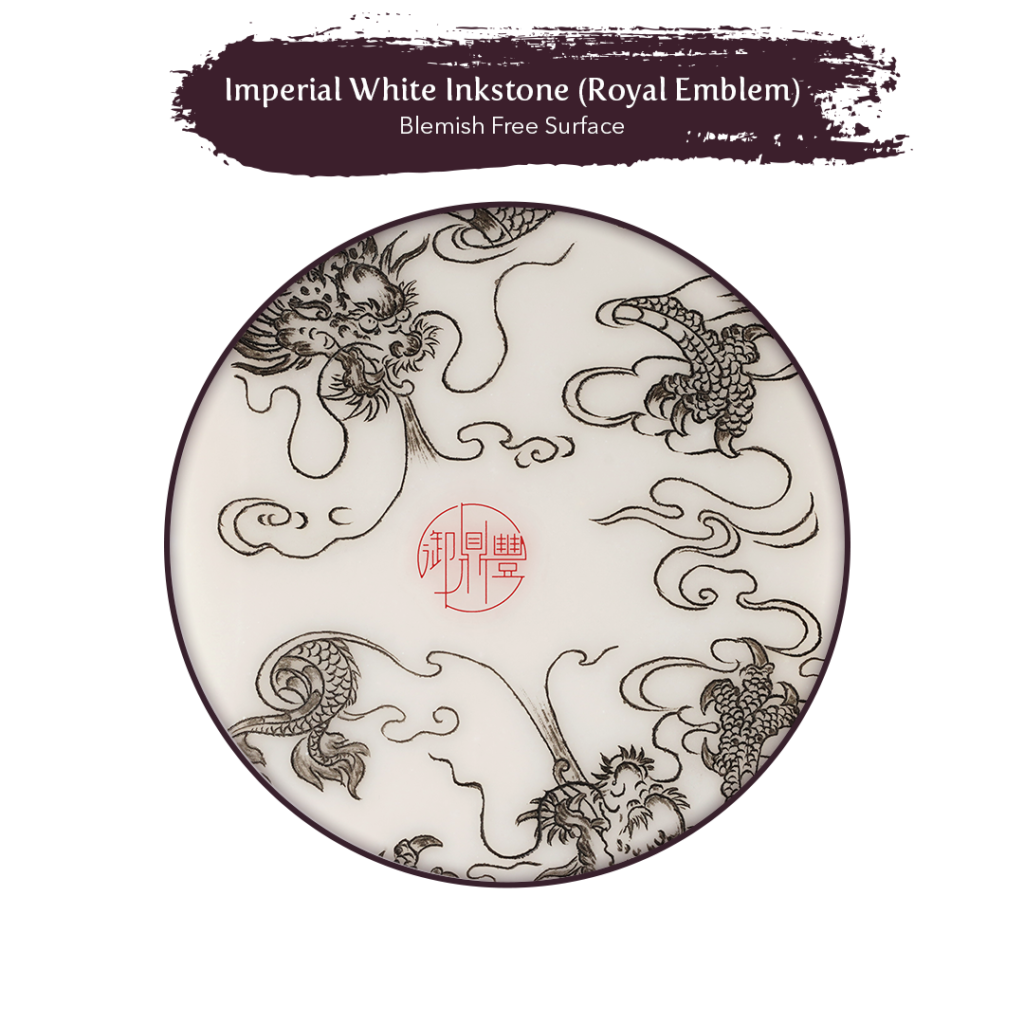 The result of these elaborate processes is a truly stunning collection that befits the Imperial Harvest brand. The Royal Emblem Imperial White Inkstone presents a flawless visual profile that accentuates its pristine pureness – a testament to our pursuit of excellence in quality and craftsmanship.

Underscoring the flawlessness and intricacy that details the Royal Emblem Imperial White Inkstones are the two vermilion seals branded onto them. Before the advent of personal signatures, watermarks or electronic document certifications, seals such as these were commonplace, particularly across East Asia. In dynastic Chinese history, such seals were used by the imperial court as a stamp of verification, bearing the affirmation of the certifying authority.

Today, many luxury timepieces bear the unique seal of their illustrious watch maisons as a testament to their centuries-long lineage. These seals also serve to authenticate the pieces as genuine works of art, commissioned and created by the watchmakers whose names they bear.

In the Royal Emblem Imperial White Inkstone collection, the spherical seal occupying centre stage is a stylized rendition of the Imperial Harvest mark, depicting the Imperial Harvest name in Chinese characters. It is a hallmark of Imperial Harvest’s superlative craftsmanship and embodies all that the brand stands for in its design and technical prowess, along with a relentless pursuit of perfection. 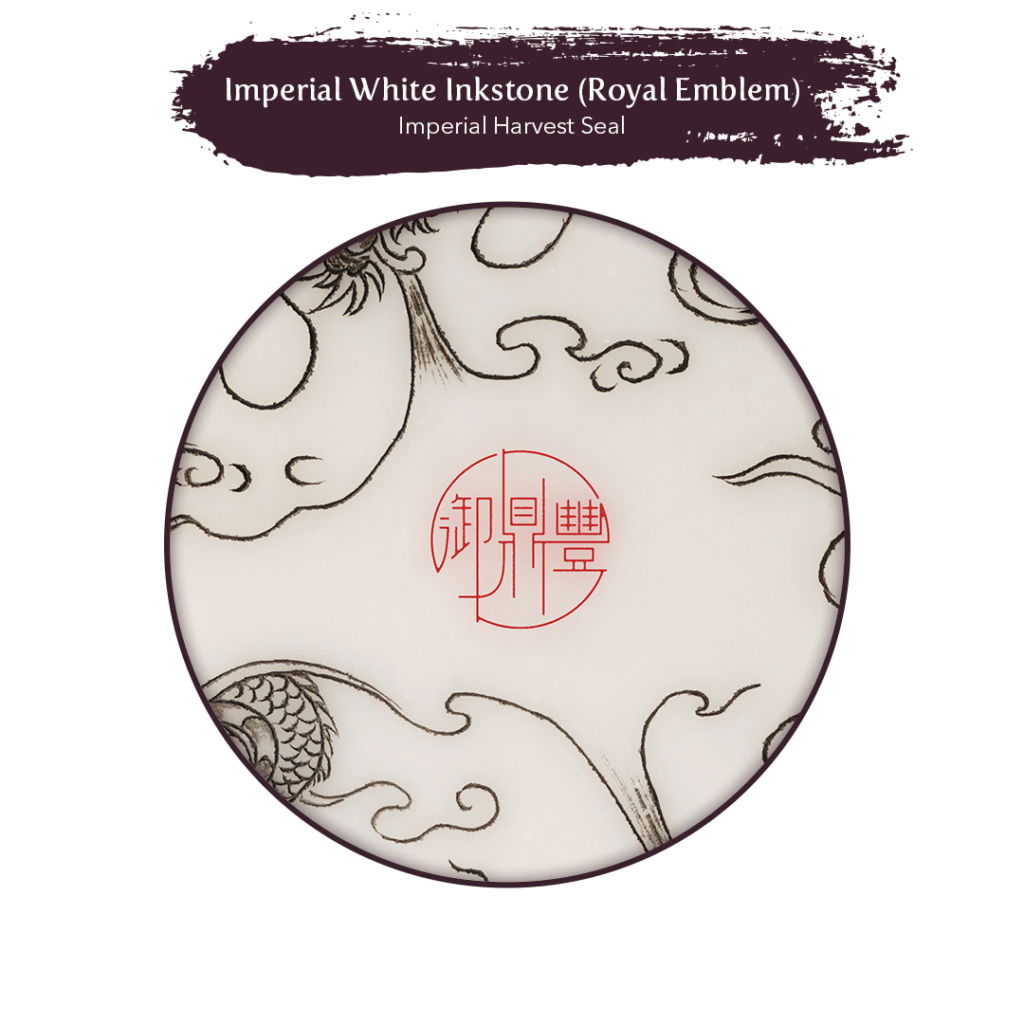 Imperial seals were also widely used by the emperor himself. In ancient China, many emperors possessed their personal, unique seals and used them to indicate their endorsement and approval. Emperor Qian Long, for instance, was known to mark documents with his seals before sending them to relevant officials to be processed. He was known to possess up to 20 different seals, each one bearing a specific inscription for use in a specific context. 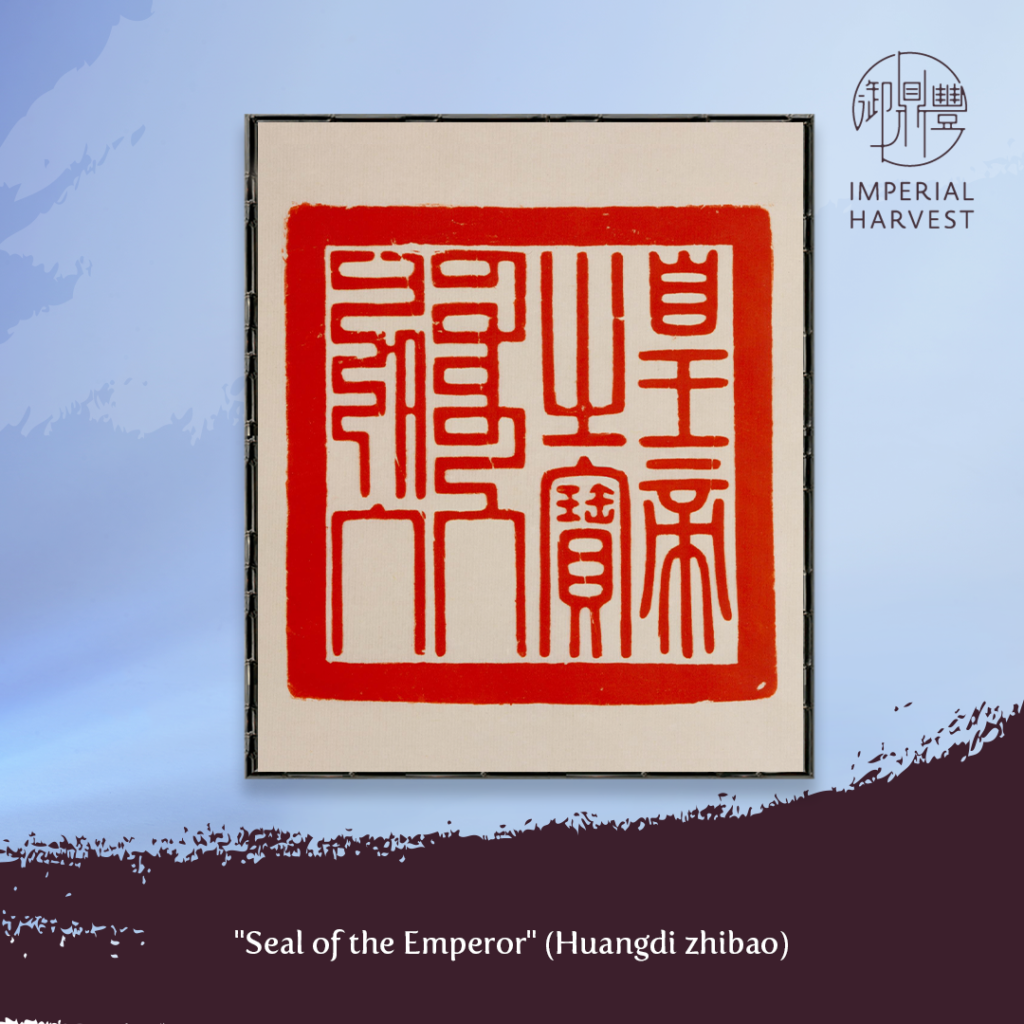 Being an avid writer and artist, Emperor Qian Long often affixed his seals onto his masterpiece creations to serve as a mark of originality, ascribing credit for the work to the Emperor himself.

Today at Imperial Harvest, the emperor’s imperial seal is reimagined as a mark of authenticity for the works of art conceptualised by Master David. In the Royal Emblem Collection, this second seal functions as his unique personal signature. It bears the Chinese characters “吴宸翔”, reflecting Master David’s name in Chinese, and highlighting his identity as a leading Imperial Feng Shui master.

Meanwhile, the character “玺” appended to Master David’s name takes reference from its ancient imperial application. In Chinese dynastic history, it was used by prominent and revered emperors as a bold proclamation of their mandate from heaven to rule. In a similar fashion, “玺”, as applied by Master David, represents his contemporary mandate to revitalize the ancient lost art of Imperial Feng Shui.

Collectively, the presence of this personal seal on the Royal Emblem Imperial White Inkstone represents an affirmation of its authenticity as an original work of art conceptualised and created by Master David himself. 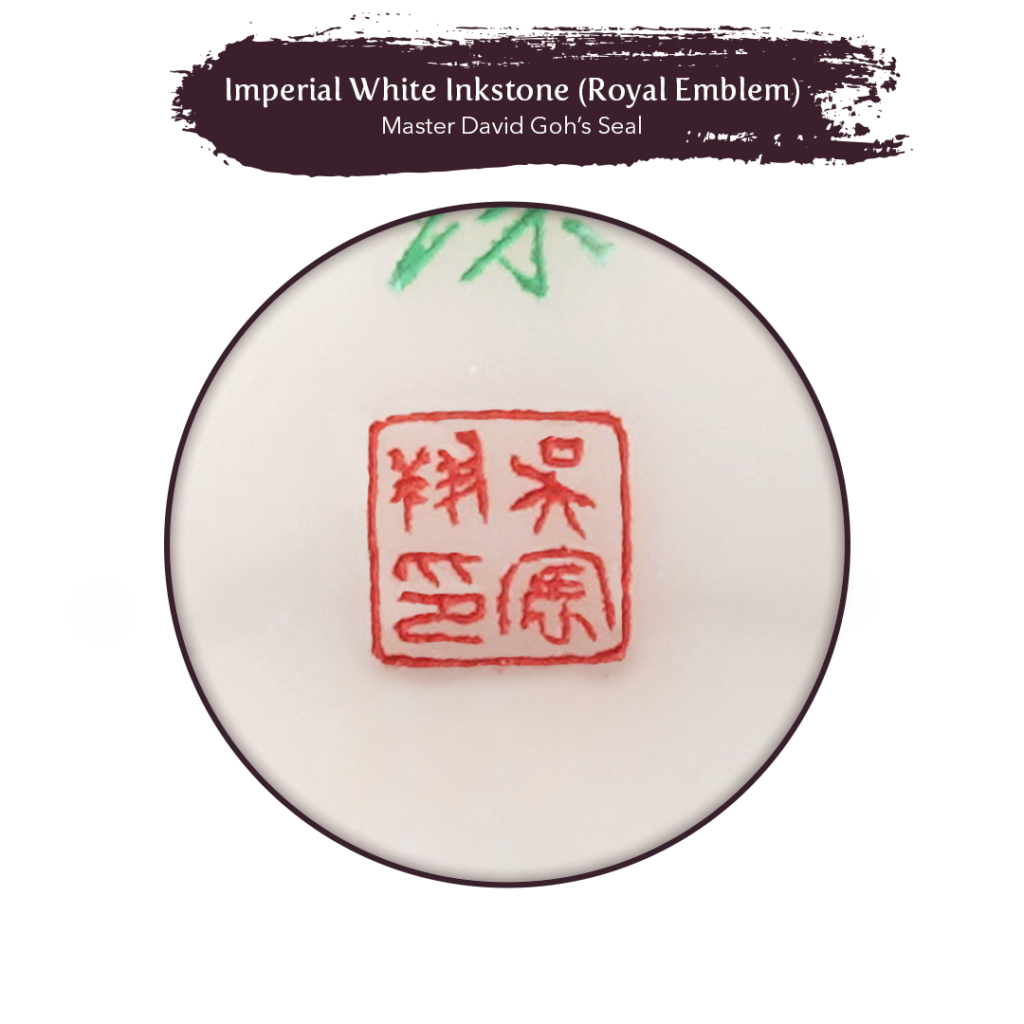 This personal mark of originality and endorsement bears the 古篆 font, mirroring one of the most popular typefaces favoured by generations of emperors to convey their inspired wisdom and undisputed authority. Parallel to the emperor’s imperial seal embodying their ruling mandate, Master David’s personal seal on the Royal Emblem Imperial White Inkstones represents his steadfast commitment to sharing the art of Imperial Feng Shui worldwide.

Together, the pair of seals represent the depth of Master David’s tri-generational lineage of Imperial Feng Shui inspiration, melded with Imperial Harvest’s cutting-edge expertise at the forefront of artisanal Imperial Feng Shui treasures. 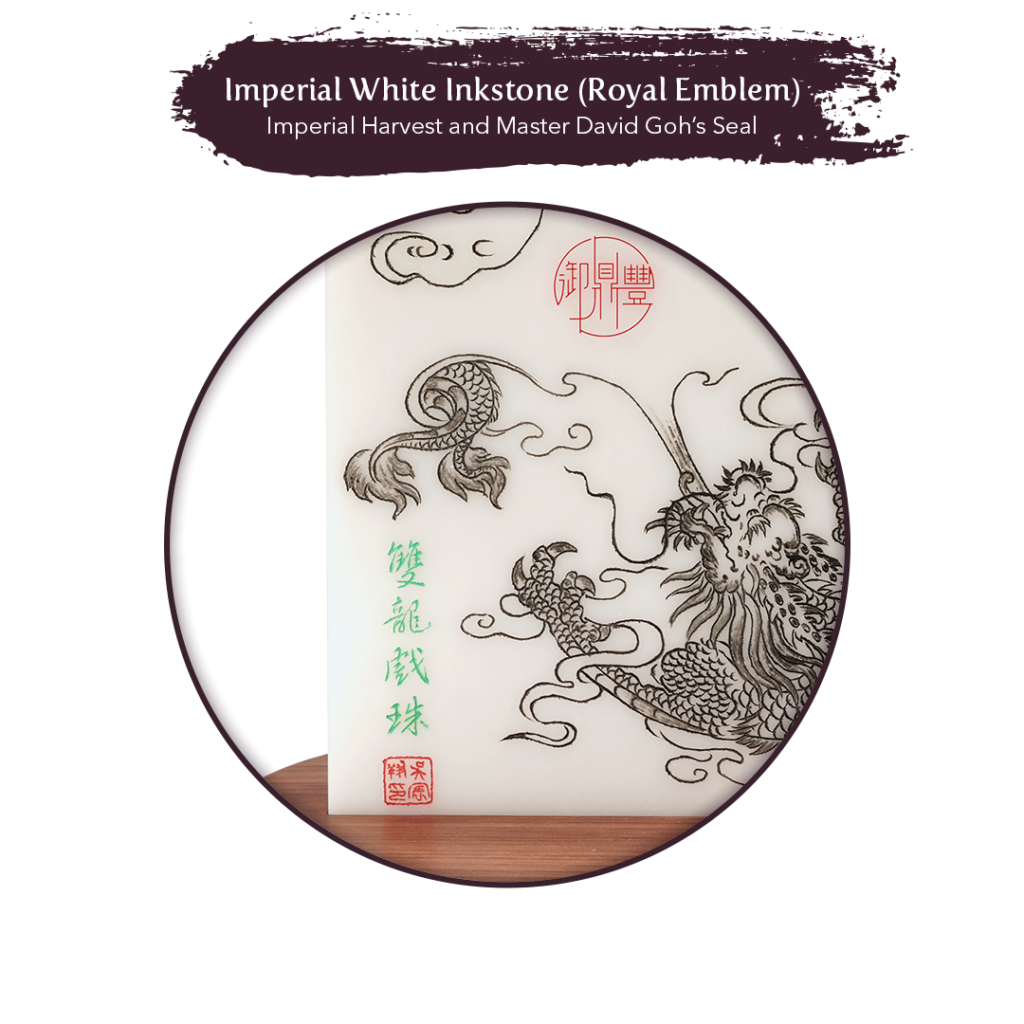 Alongside the natal authority star which governs one’s influence and leadership, a complementary scope of Imperial Feng Shui involves ushering in an abundance of benefactor support, wealth and health. This is where the Qian Long Wishing Stone plays a starring role. It is a close cousin of the Imperial White Inkstone, sharing with it several physical traits and qualities. 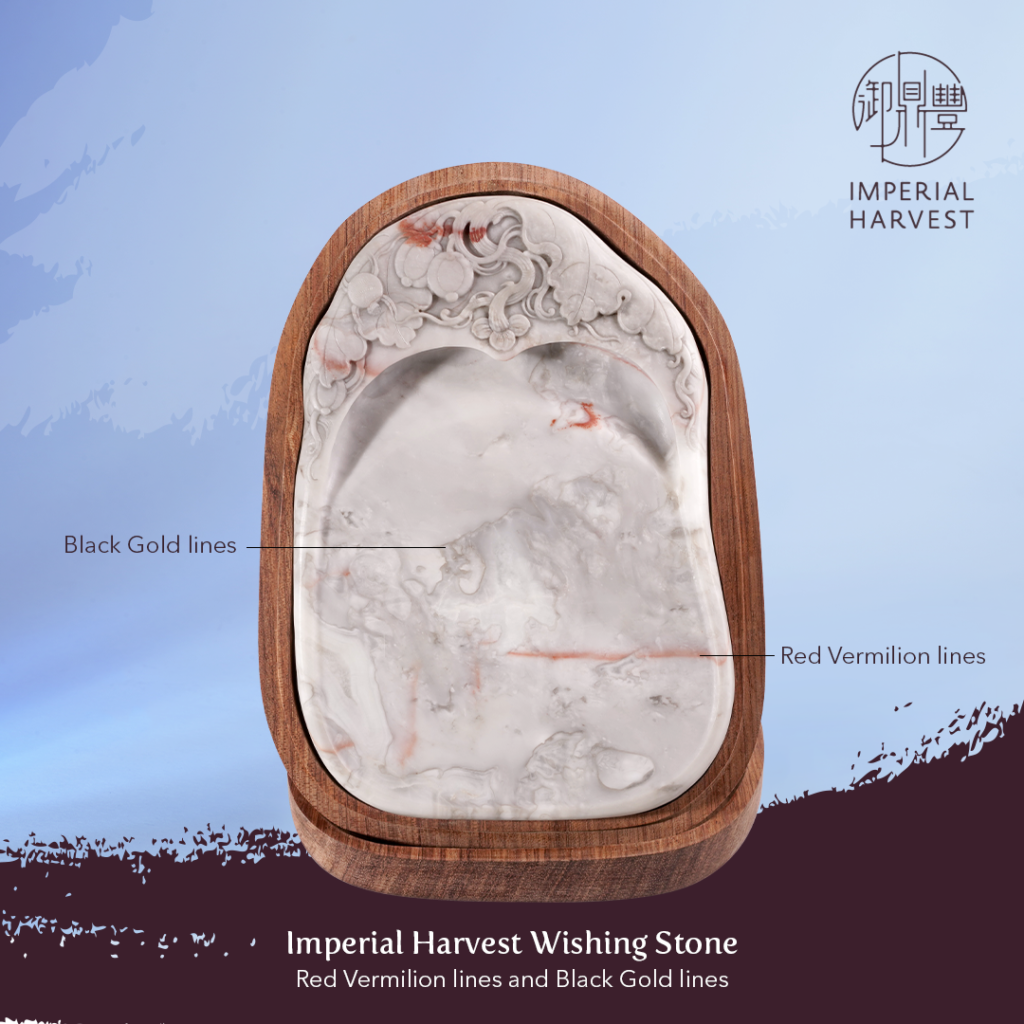 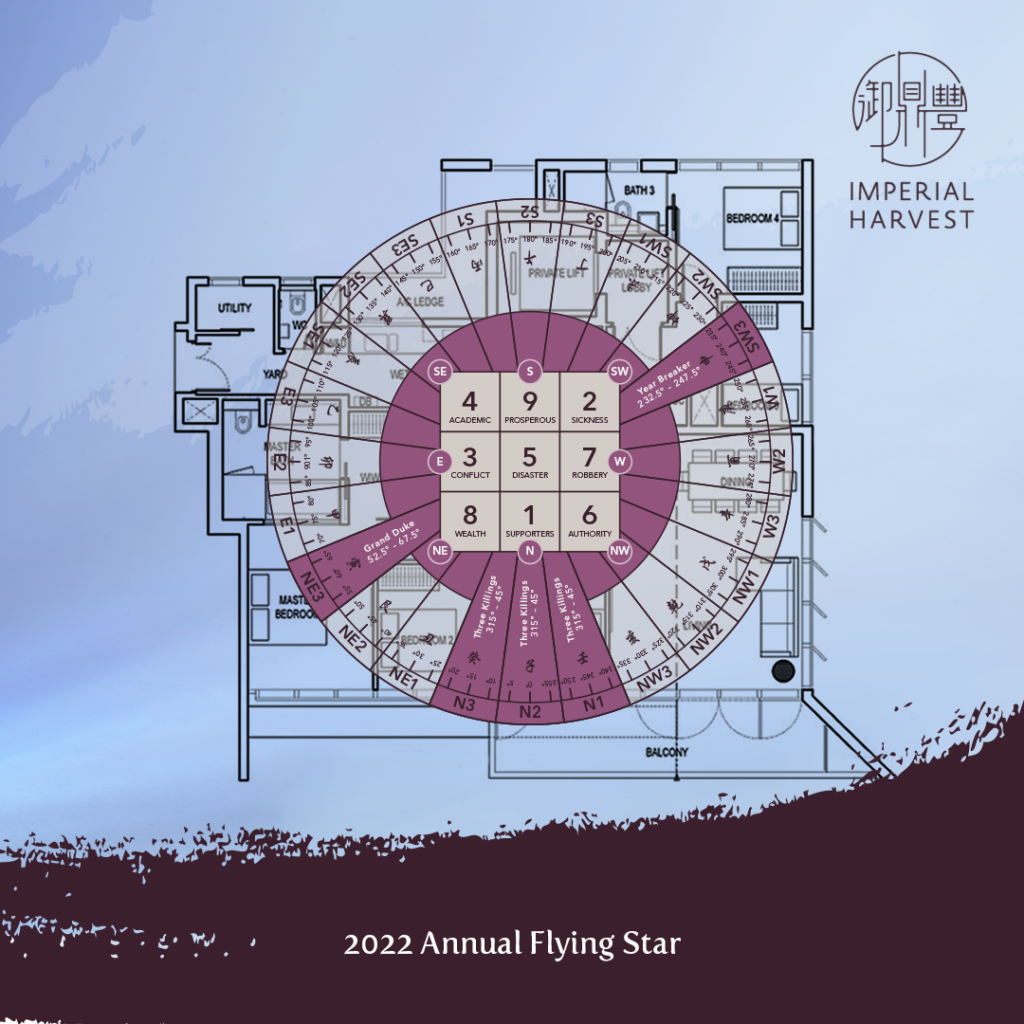 With Imperial Harvest’s Annual Wealth Star method, our team of consultants will advise our blessed clients on their annual wealth sectors. Thereafter, our blessed clients can grind the complimentary red vermillion ink sticks 36 times clockwise on the Qian Long Wishing Stone before making their wishes.

Based on the 2022 Annual Flying Star Chart, Master David would recommend grinding the Imperial White Inkstone 36 times clockwise at the following sectors: 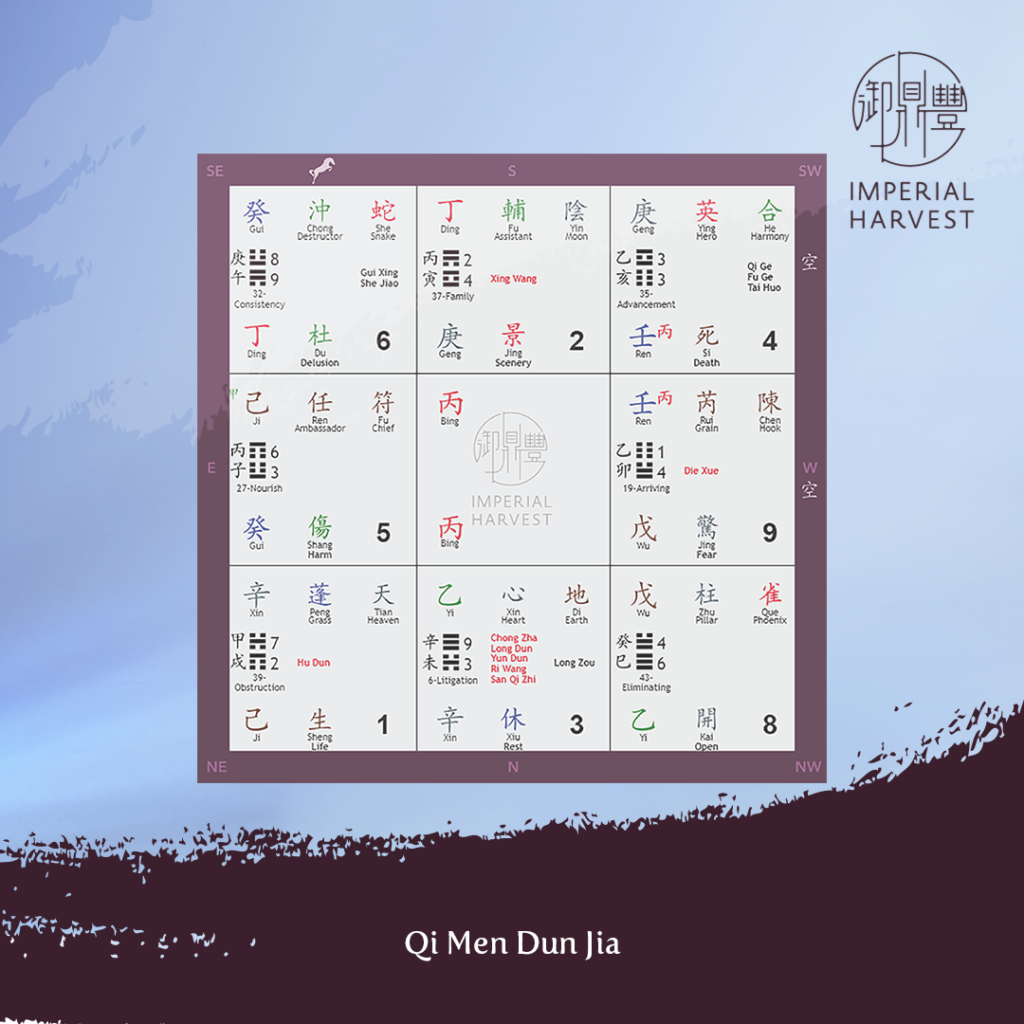 With the publication of our monthly Qi Men Dun Jia calendar indicating the specific favourable direction within a 2-hour time frame known as 时辰 – clients can grind their complimentary red vermillion ink sticks 36 times clockwise and meditate for their wishes to come true whilst facing the auspicious Qi Men Dun Jia direction. 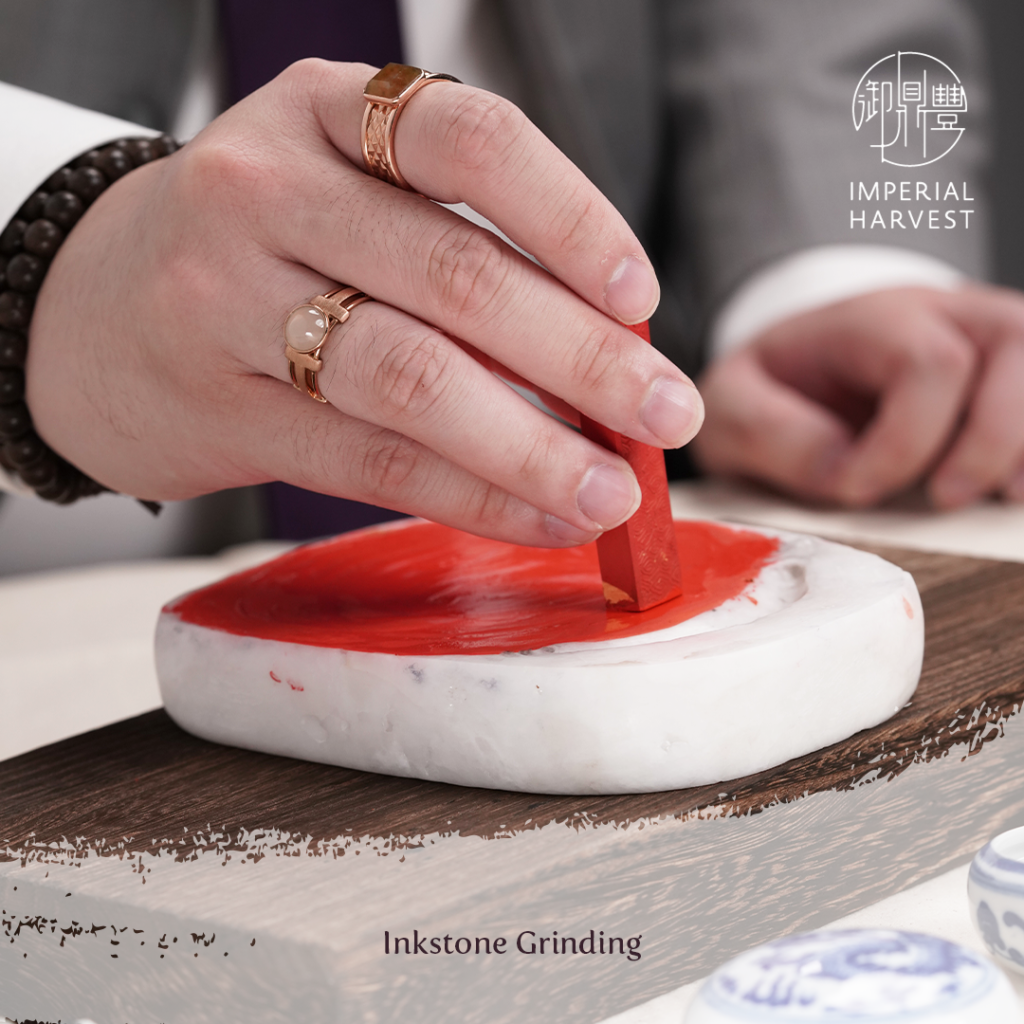 As the Qian Long Wishing Stone is versatile and compact, it is particularly useful for clients whose work is mobile or requires frequent travel. It can be conveniently transported and manoeuvred into place as required.

For example, while the Qian Long Wishing Stone may be installed in a home based on its annual wealth sectors, it can also be easily moved to a different space for meditative purposes. This can be especially useful when preparing for important deliverables or deal closings, as you may meditate with the Qian Long Wishing Stone for a favourable outcome.

Harnessing the Imperial Feng Shui properties of the Qian Long Wishing Stone, while meditating upon it, is a highly-ceremonial affair that can be traced back to how these Wishing Stones were traditionally employed by the imperial court in ancient China. 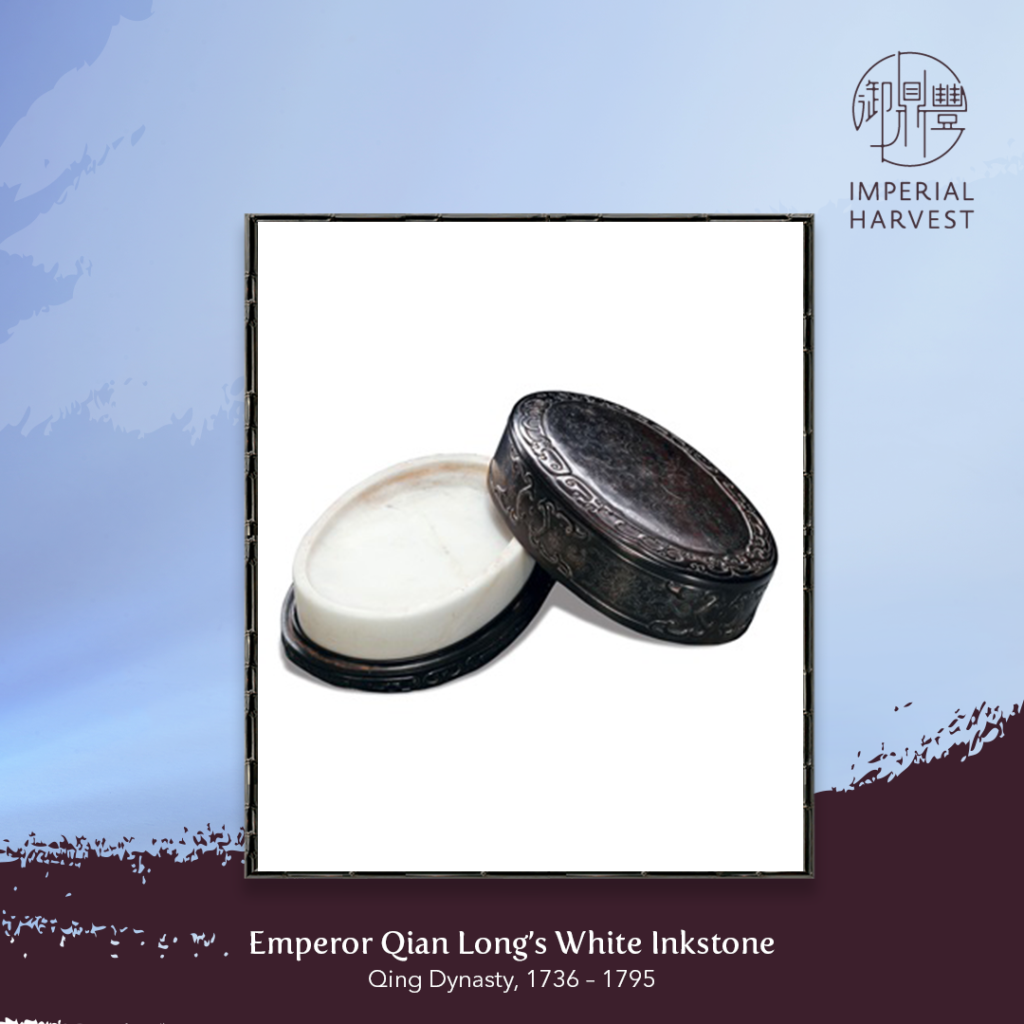 As part of their day-to-day role in overseeing the governance of the empire, emperors were heavily involved in making suites of important decisions. Emperor Qian Long was known to have had a penchant for using these specific types of stones to grind the specially-concocted vermilion cinnabar paste he used in his imperial seal while reviewing daily state affairs. It was thought that this aided in focusing his thoughts and deliberations on the most crucial and consequential information, empowering him to make inspired decisions for the continued success of the empire.

Over time, Emperor Qian Long’s habit caught on through successive generations of emperors, who similarly employed such stones in the grinding of the imperial vermilion cinnabar paste. These Wishing Stones came to be associated with their role in evoking a quiet and contemplative state of deliberation through this meditation.

Today, Imperial Harvest is committed to upholding this culturally-significant tradition passed down in royal circles centuries ago. Upon acquiring a Qian Long Wishing Stone, destined owners also receive a lifetime’s supply of Imperial Harvest’s special Imperial Vermilion Inksticks – the same powerful concoction used to bless every Imperial Harvest treasure. Following in the imperial traditions of ancient Chinese emperors, these Imperial Vermilion Inksticks can be ground with water against the Qian Long Wishing Stone to produce the striking bright imperial ink. Alternatively, agarwood and sandalwood oil may be used instead of water to incorporate their auspicious direct and indirect wealth properties.

Just like Emperor Qian Long and subsequent emperors, blessed clients are empowered to focus on key aspects and promptly arrive at inspired decisions, while mulling over important matters in day-to-day personal and professional endeavours.

As the Royal Emblem Imperial White Inkstone counters three types of negative energies – 口舌 (arguments), 官非 (lawsuits)  and 小人 (malefactors), it is imperative for it to be in pristine quality and condition. This sheds light on its unblemished whiteness and internal flawlessness, which collectively produce a visually-captivating profile.

Indeed, these immaculate treasures are both vital additions to any ambitious and goal-oriented household. Empowered by their qualities, blessed clients are well-placed to achieve their unlimited human potential in 2022. 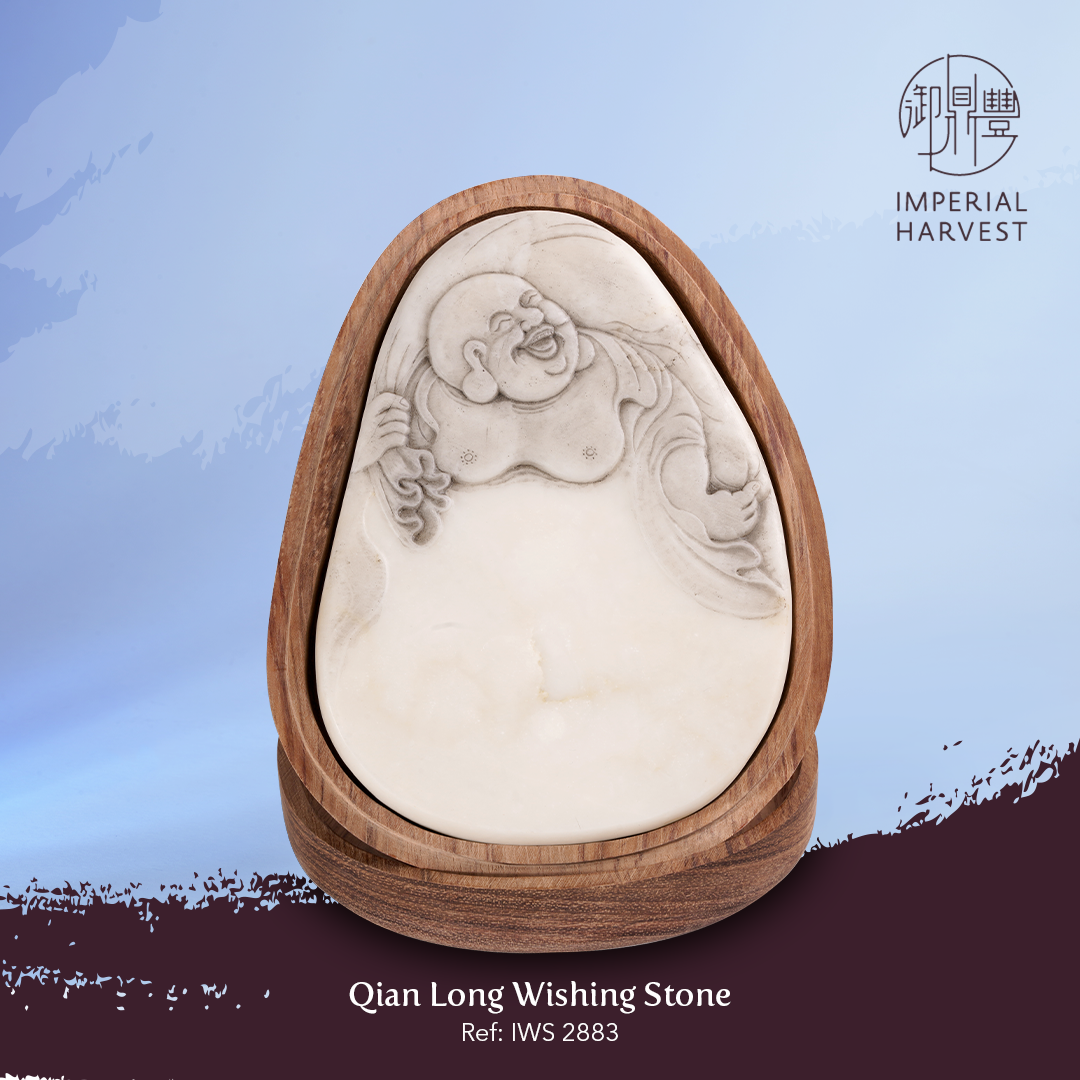 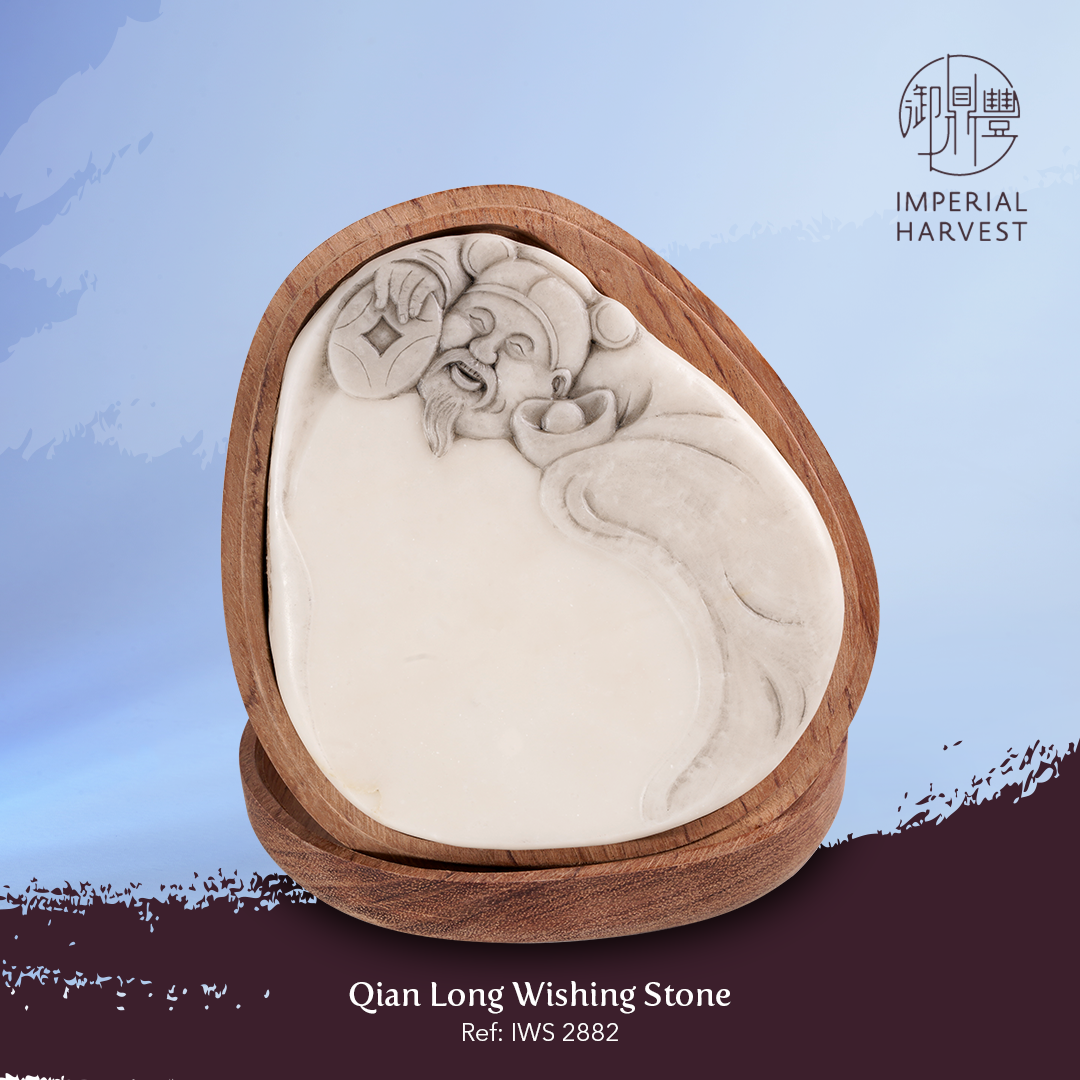 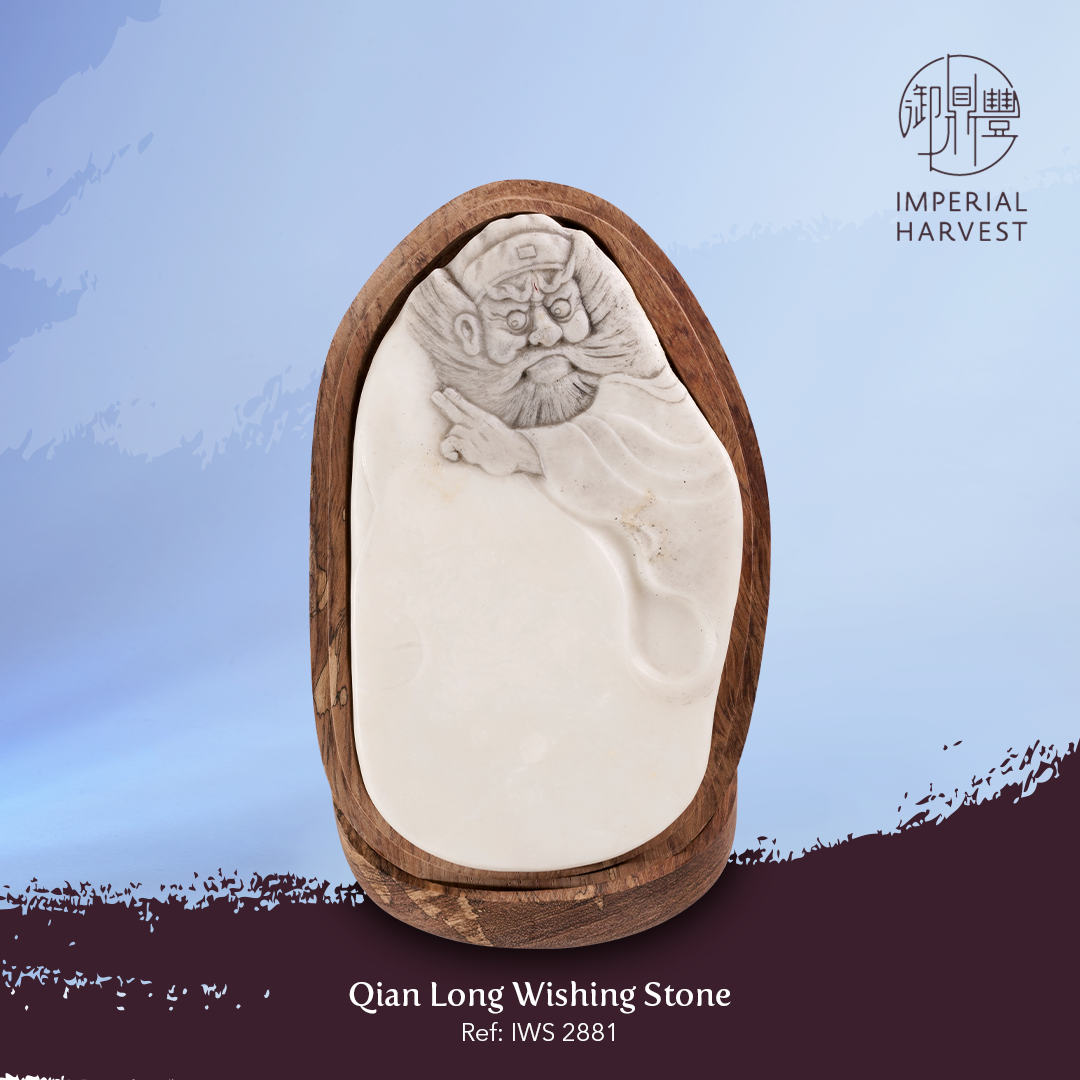 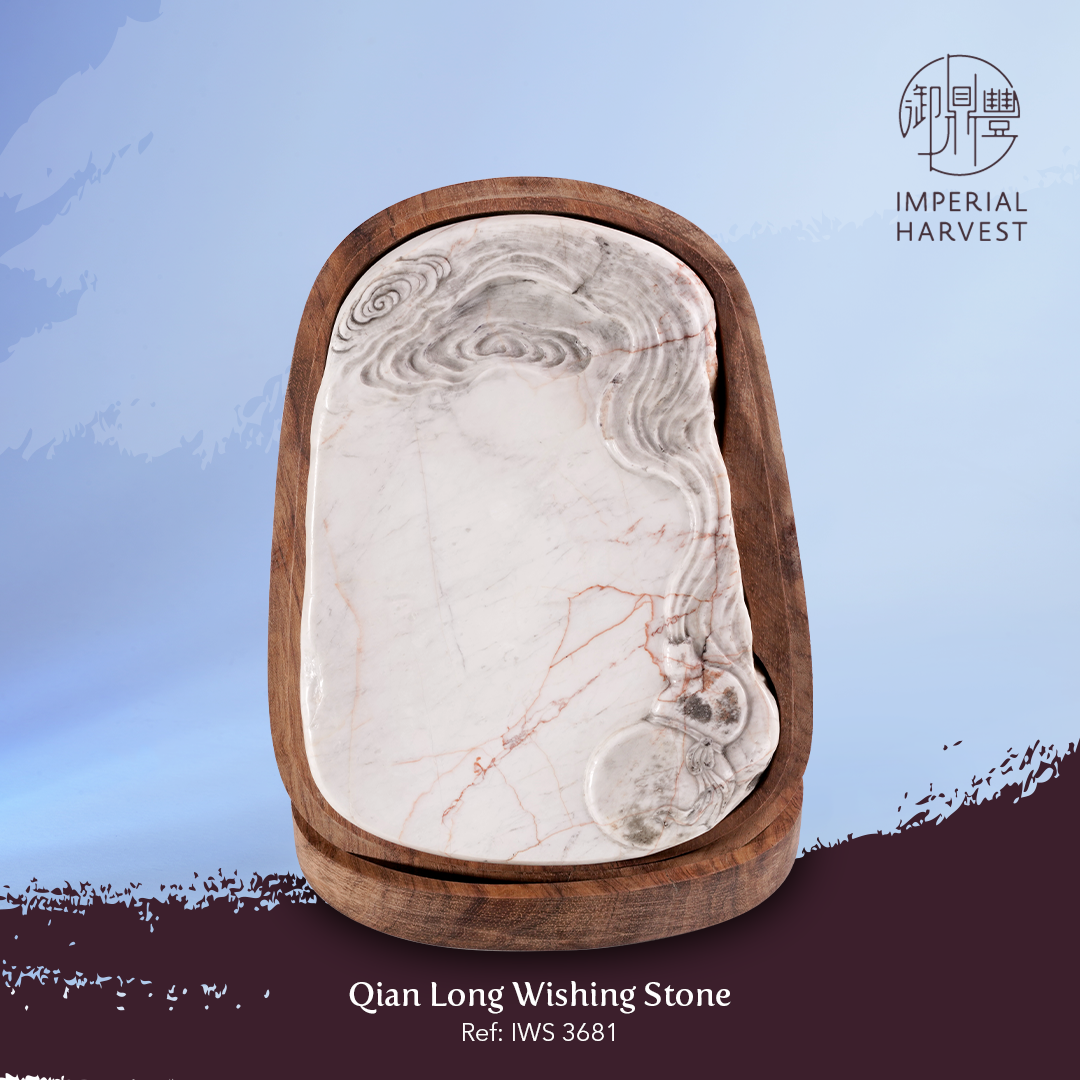 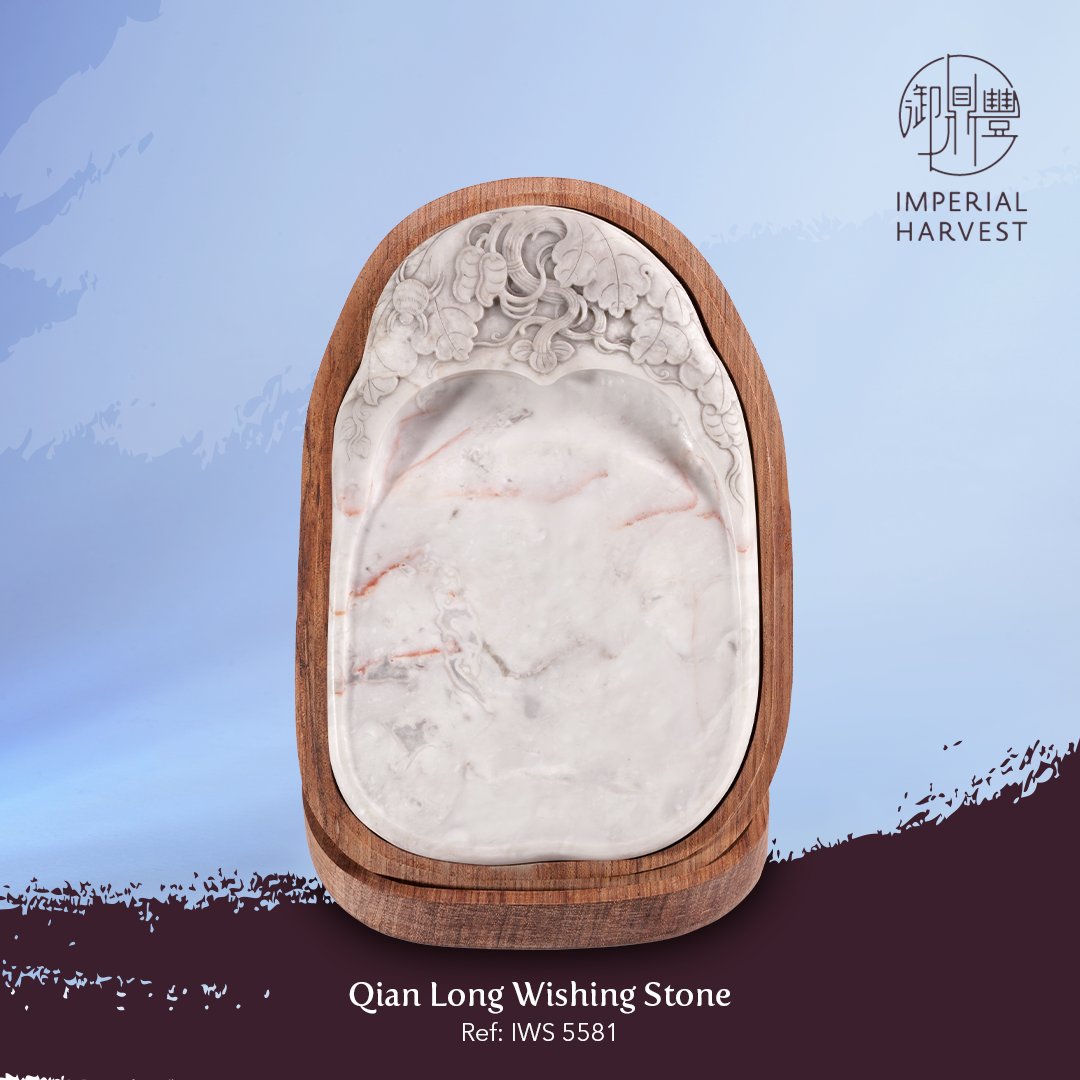 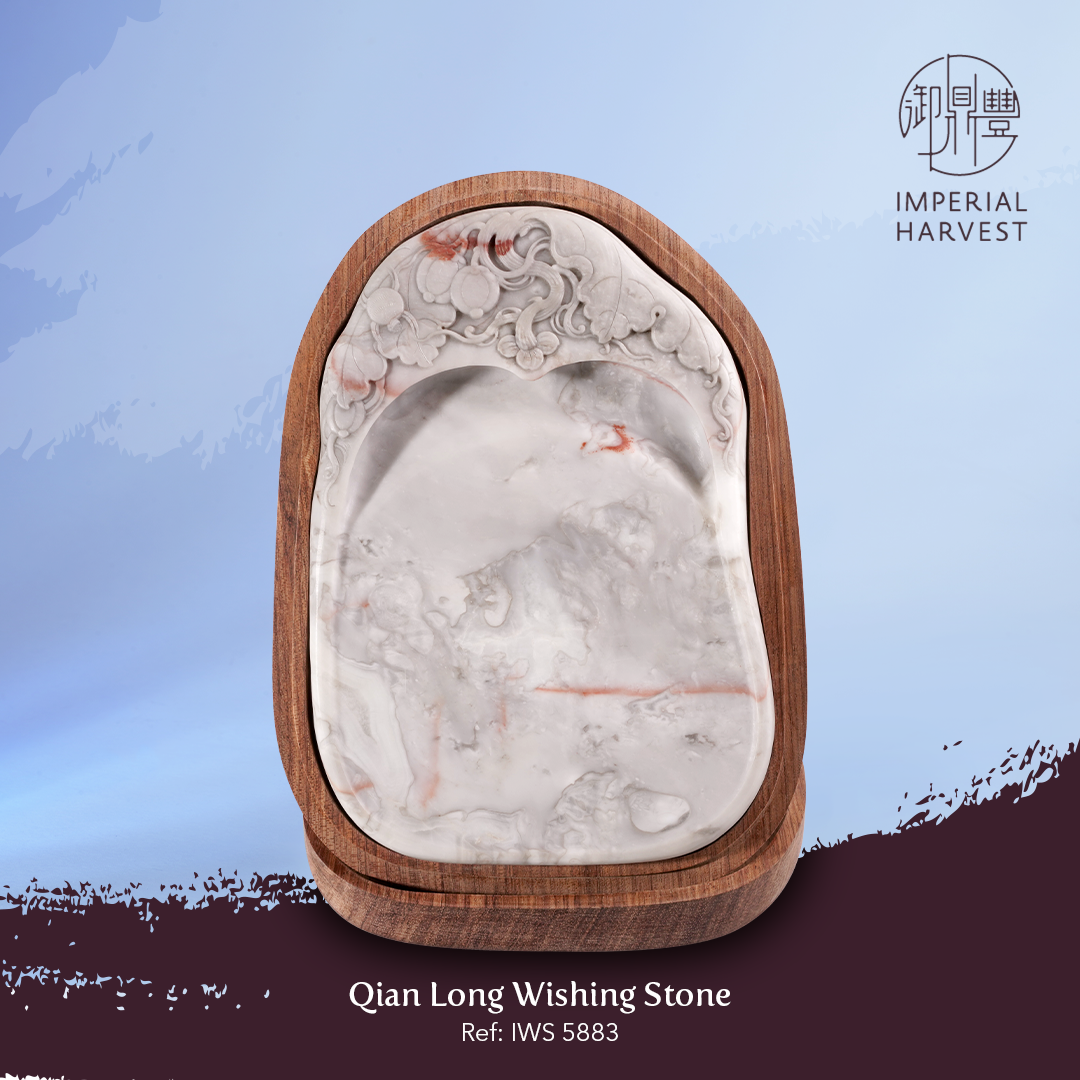