With its multifaceted fusion of a dragon’s head, a horse’s body and unicorn claws, the Pixiu (貔貅) never fails to command attention. This auspicious creature has been an ever-present staple in Chinese mythology since time immemorial, commanding both adoration and admiration.

The Pixiu’s bold lion-like silhouette and magnificent wingspan make it a visually striking spectacle to behold. With its undeniable grandeur, it comes as no surprise that it has long been seen as a creature to be feared and respected.

In dynastic China, the Pixiu was commonly displayed at prominent locations within palaces, such as hallways and grand entrances, to optimise the flow of Qi, or cosmic energies, within. Indeed, the Pixiu has long been revered for its ability to ward off inauspicious Qi (阴气) and harness auspicious Qi (生气) for the occupants in any given location. 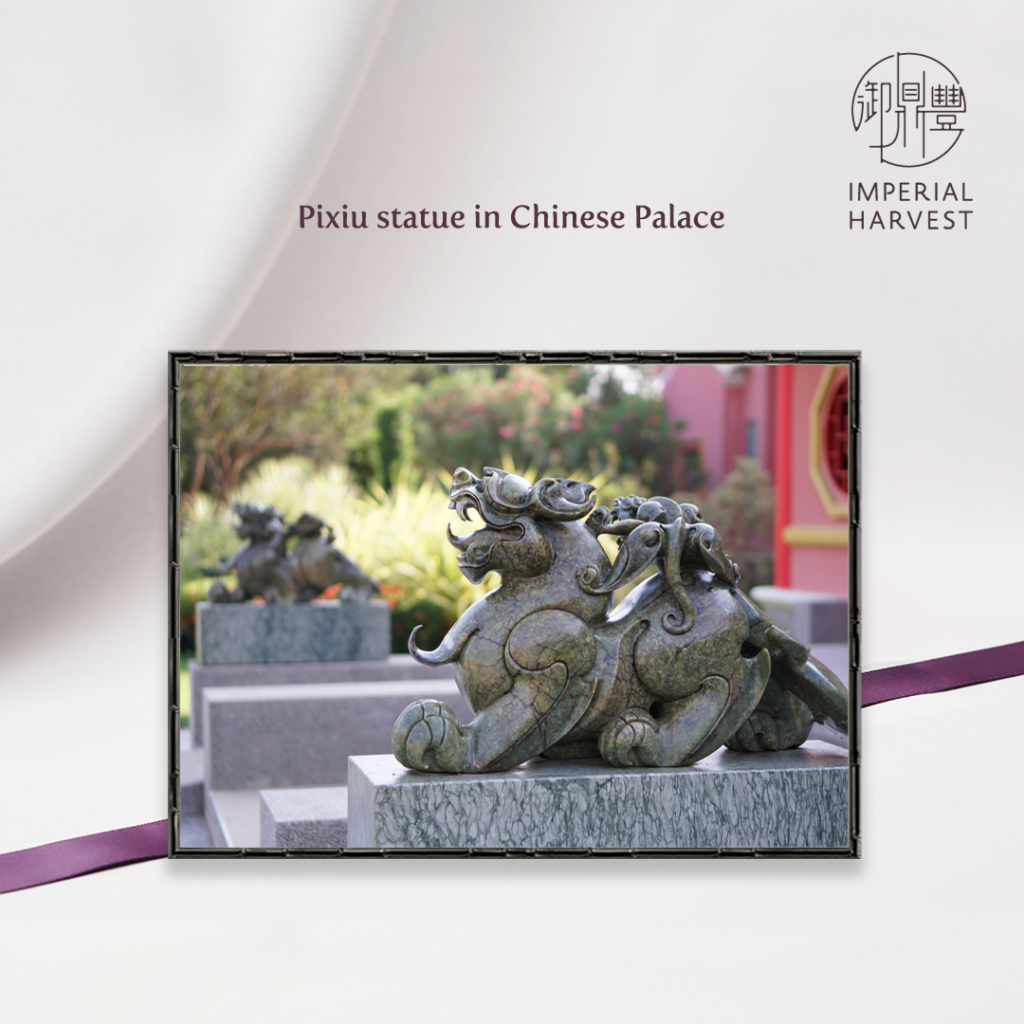 According to Chinese mythology, the Pixiu is fond of water, gold, silver and other precious jewels— consuming these symbols of wealth from all directions as sustenance. These treasures are said to remain within the Pixiu indefinitely, making the creature synonymous with the acquiring and retention of blessings and wealth. This, coupled with its insatiable appetite, helps its destined owner attract and rapidly accumulate assets and resources from direct channels, as well as unexpected windfalls. In Imperial Feng Shui, the Pixiu is unsurprisingly one of the strongest auspicious manifestations of luck, particularly when it is installed in the auspicious water star sector of one’s home or workplace. It also protects occupants from all dangers and calamities, making it an omnipresent trusted guardian angel. 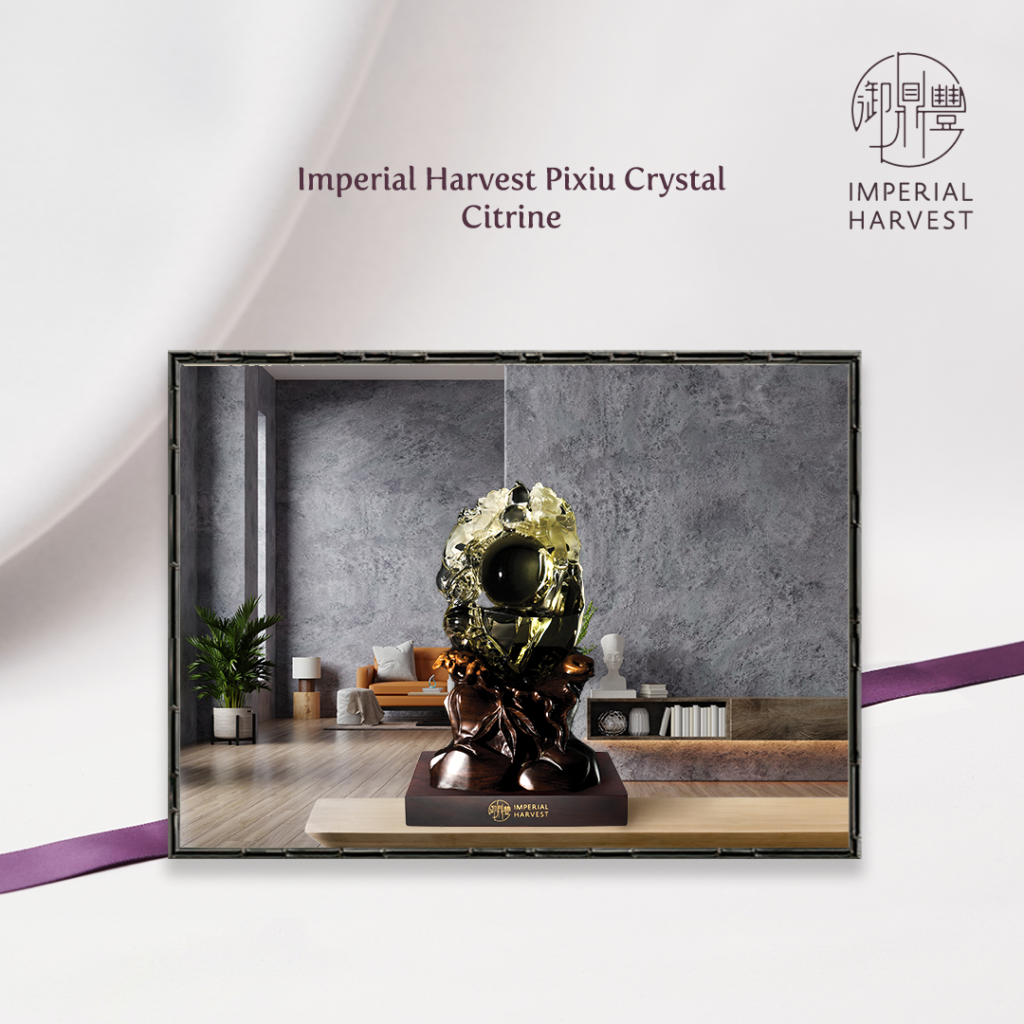 The Pixiu in Modern Times

The legend of the Pixiu persists to this day, with images and figurines of this magnificent creature commonly spotted at a wide variety of Feng Shui retailers. In gleaming contemporary malls and dingy street corners alike, one commonly chances upon all manner of such vendors, each carrying a suite of trinkets and ornaments purportedly guided by the principles of this ancient art. The adornments peddled may range from personal effects and wearable jewellery such as bracelets and charms, to imposing statues and elaborate home ornaments complete with water features, lighting and audio effects.

The nature of Feng Shui is evidently subject to great diversity in interpretation, across its numerous branches and schools of thought. Adherents of Classical Feng Shui, for example, subscribe firmly to the notion of a predestined life trajectory. This connotes an inability to change one’s predetermined luck, and instead encourages one to prepare for the misfortunes that will inevitably present themselves.

In contrast, Imperial Feng Shui subscribes to the notion that mankind is in full control of their own destiny, if only the correct tools are employed. It posits that given the appropriate circumstances, anyone is capable of creating the ideal conditions for one’s desired successes.

Such diverging interpretations extend to the use of Feng Shui treasures, leading to misguided or conflicting applications of prominent deities and mythical creatures. Alas, this includes the Pixiu, whose magnificent splendour and glory has, over generations of misinformation, been misappropriated by deviant understandings of the Feng Shui tradition.

Today, the Pixiu commonly makes its appearance on Pixiu-themed bracelets, which derive their distinctive features from Classical Feng Shui theories. For example, materials such as gold and black obsidian are often found in these bracelets, as these are hallmarks of Classical Feng Shui. While visually appealing, the use of many of these materials is not strongly supported by verifiable historical accounts in the long and illustrious practice of Feng Shui, leaving their selection primarily on aesthetic grounds.

As an internationally-acclaimed pioneer in Imperial Feng Shui, Imperial Harvest is, and has always been, faithful to the principles of this ancient art. This manifests in an unwavering adherence to the groundbreaking studies undertaken by the masters of the Chinese imperial court.

According to findings from their rigorous scholarly studies, fashioning raw jadeite into wearable pendants allows it to take on an unrivalled ability to balance the major yin – the cosmic phenomenon which governs luck. This augments the reception to jadeite – already universally popular for its visual allure and smoothness to the touch. Indeed, the unmatched potency of jadeite pendants in enhancing one’s personal luck positions them as some of the most sought-after treasures in the Imperial Feng Shui domain.

Guided by these eminent findings, personal wearable treasures featuring the revered Pixiu manifest as jadeite pendants at Imperial Harvest. Conceptualised from Master David’s visionary Imperial Feng Shui expertise, the Imperial Harvest Fine Jadeite Pixiu exudes the mystique and glory of this mythical creature to the fullest, making it an exceptional treasure in both form and function. In adherence to the highest quality control standards established by Master David, only the most exquisite raw jadeite boulders make the cut for the Imperial Harvest collection.

Indeed, the Pixiu is a star in its own right, taking centre stage in the lineup of Imperial Harvest Fine Jadeite Pixiu treasures. With this latest manifestation of Imperial Harvest’s unrivalled jadeite craftsmanship and design excellence, our family of blessed clients are able to leverage the auspicious prosperity, wealth and golden opportunities unlocked by this ancient mythical creature. 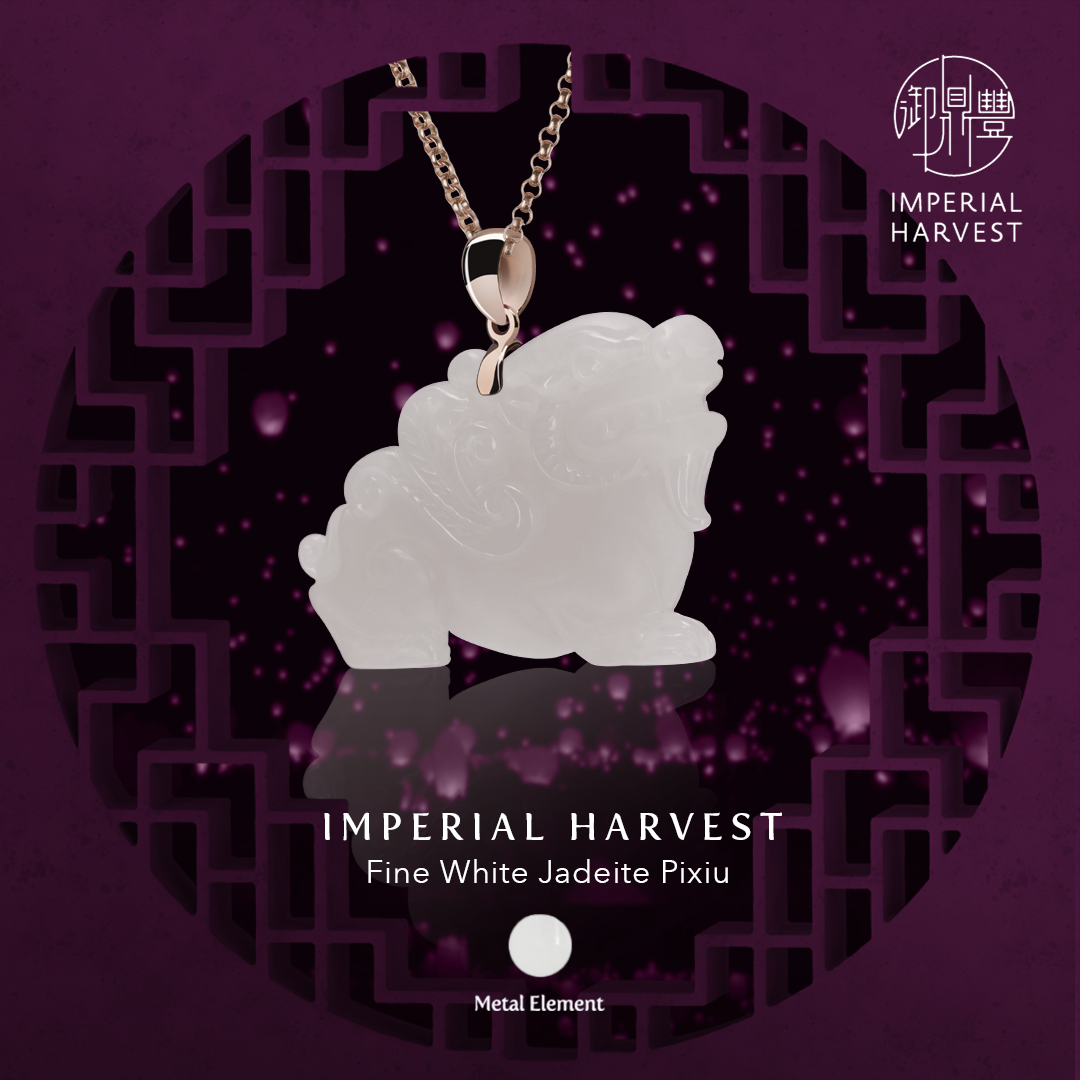 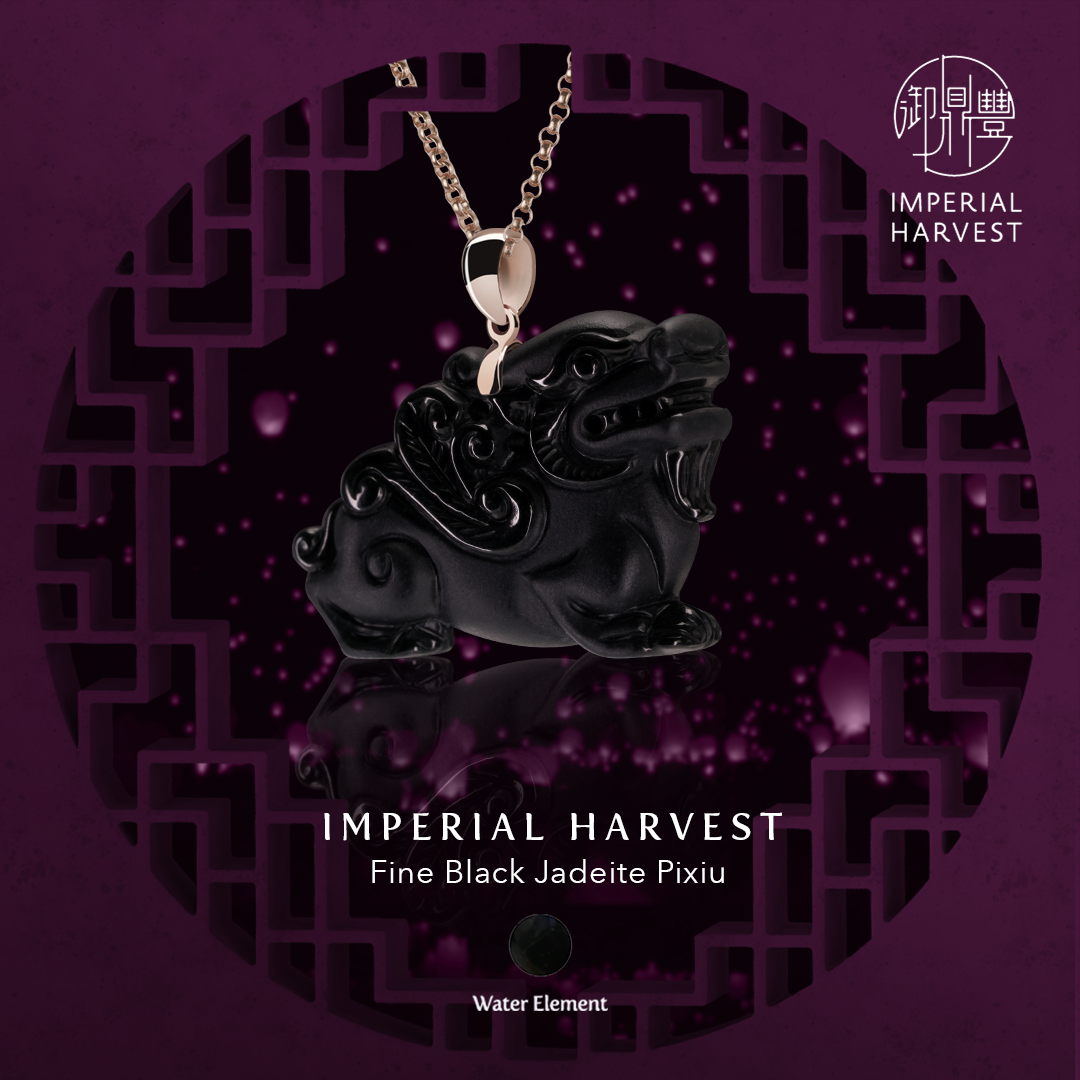 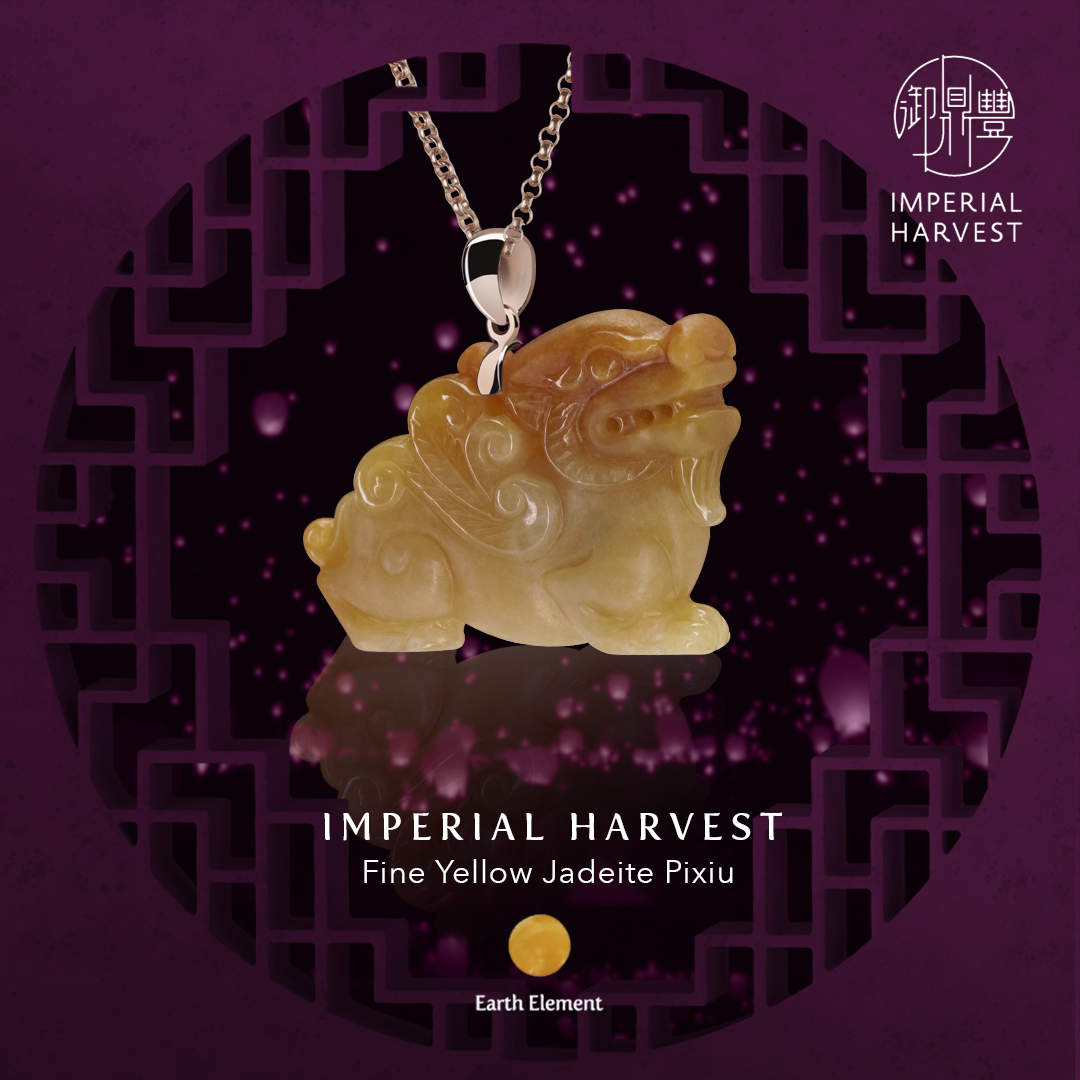 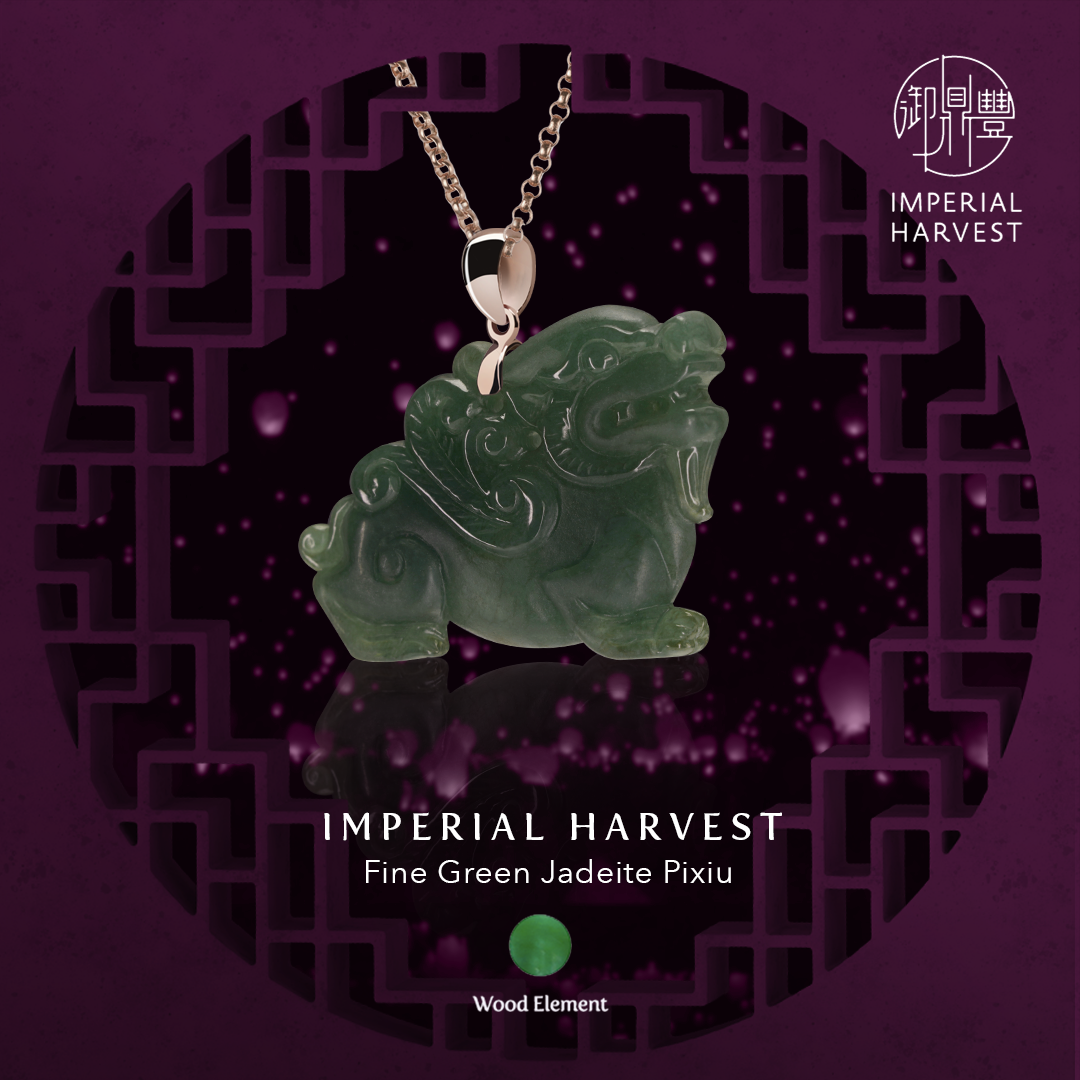 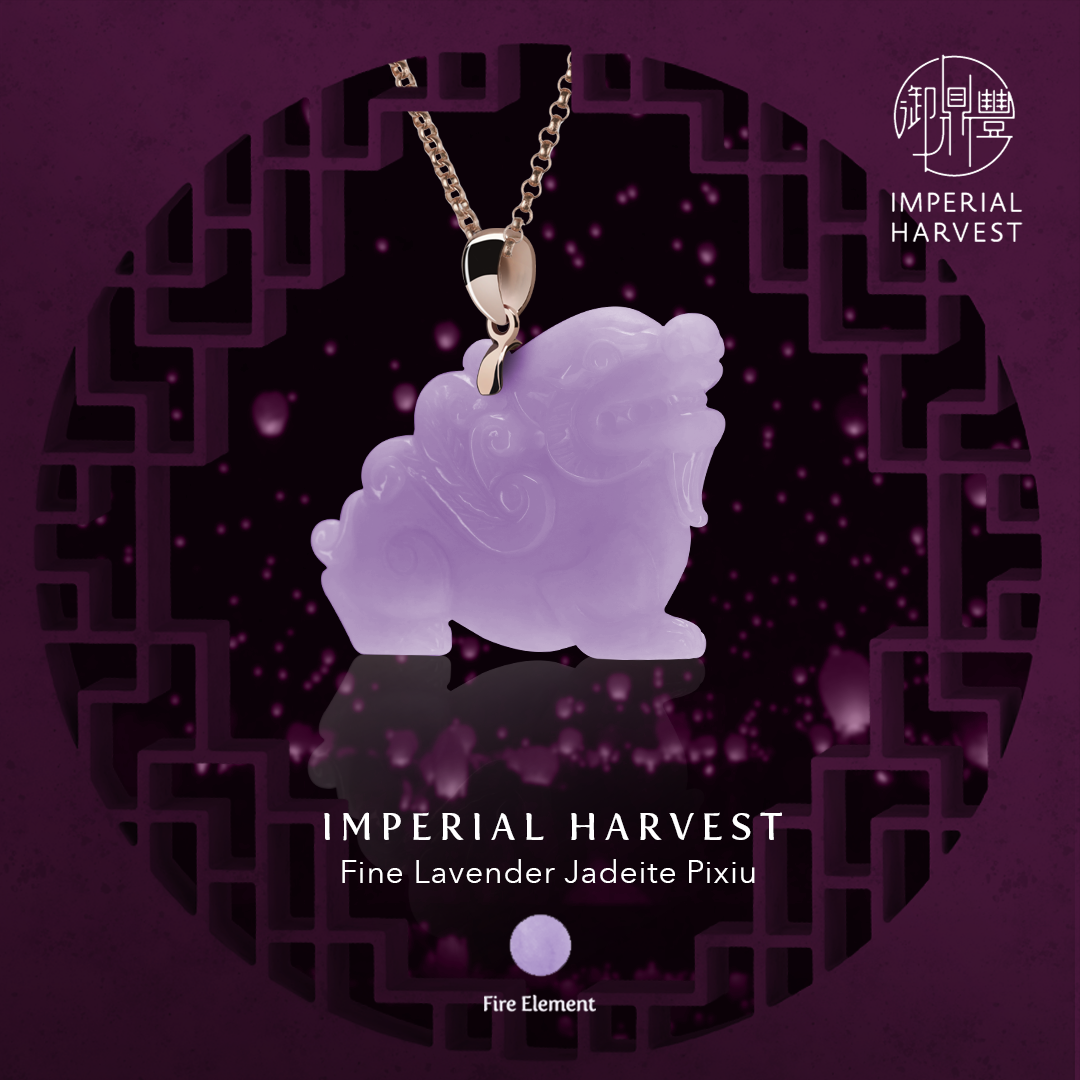