The Mythical Creatures crystal collection draws inspiration from the mythology of legendary creatures in ancient China. In Chinese mythology, they are iconic symbols, often associated with auspicious meanings such as good fortune, prosperity and wealth.

Master David has selected 4 of the most powerful mythical creatures for this collection, they are:

In this article, Master David will share the benefits of placing each of these Imperial Harvest-grade crystals in your home or workplace.

The Dragon Turtle is known as one of the most auspicious mythological creatures in Chinese history. It depicts a creation with the body of a turtle and the head of a dragon.

This auspicious symbol was mostly found in ancient Chinese palaces as it’s a representation of peace, stability and longevity of the emperor.

The dragon is one of the most powerful symbols in Imperial Feng Shui as it is associated with courage, auspiciousness, and good luck. On the other hand, the turtle which is often associated with the wisdom of the earth, brings the spirit of stability, longevity, and protection.

Combining the attributes of the dragon and the turtle, the mythical dragon turtle has the ability to grant everlasting wealth to whoever it comes across and also acts as a representation of protection and authority.

In Imperial Feng Shui, the dragon turtle is known to be a catalyst of stunning career and business luck – particularly in cutthroat or competitive industries. This is because of the grounded, consistent energy of the turtle and the powerful, wealth-bringing ambition of the dragon. Together, it transcends the ultimate symbol of continued stable success for generations to come, protected from adversity. 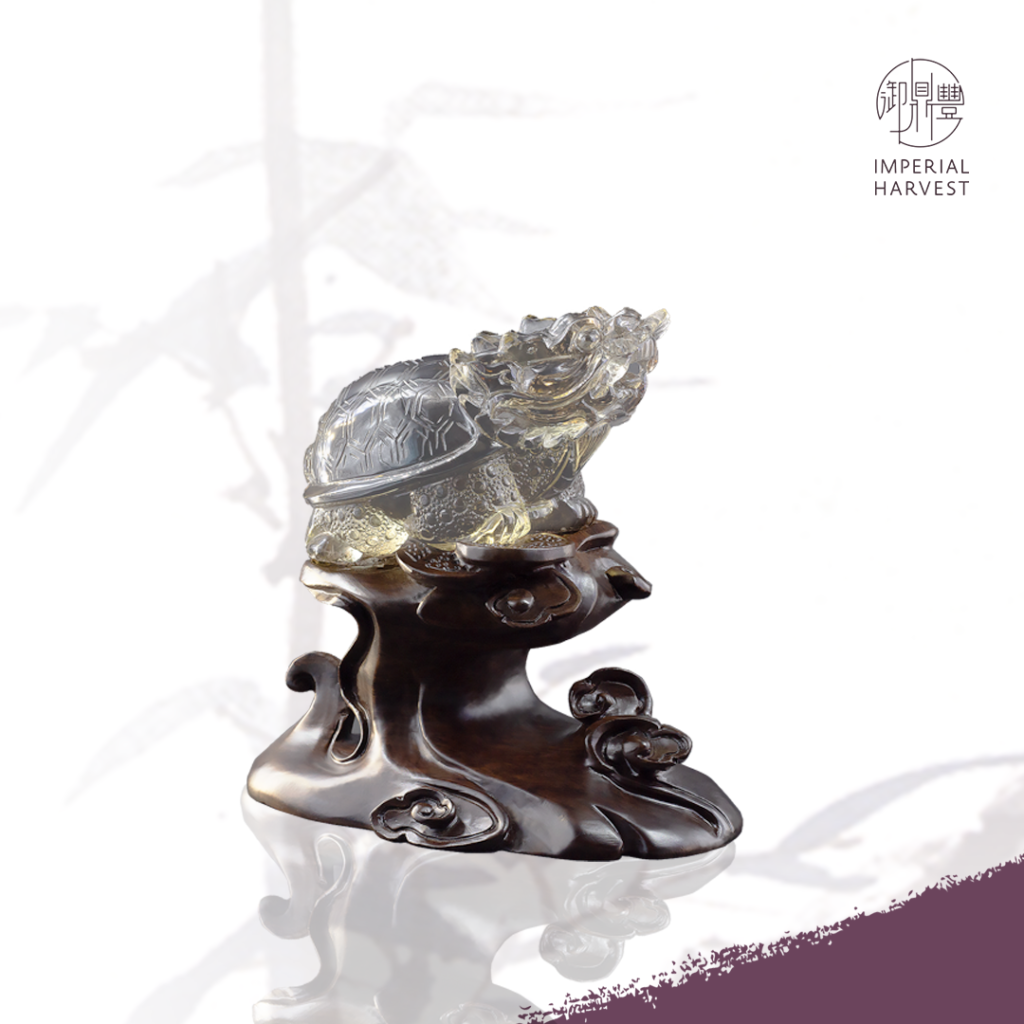 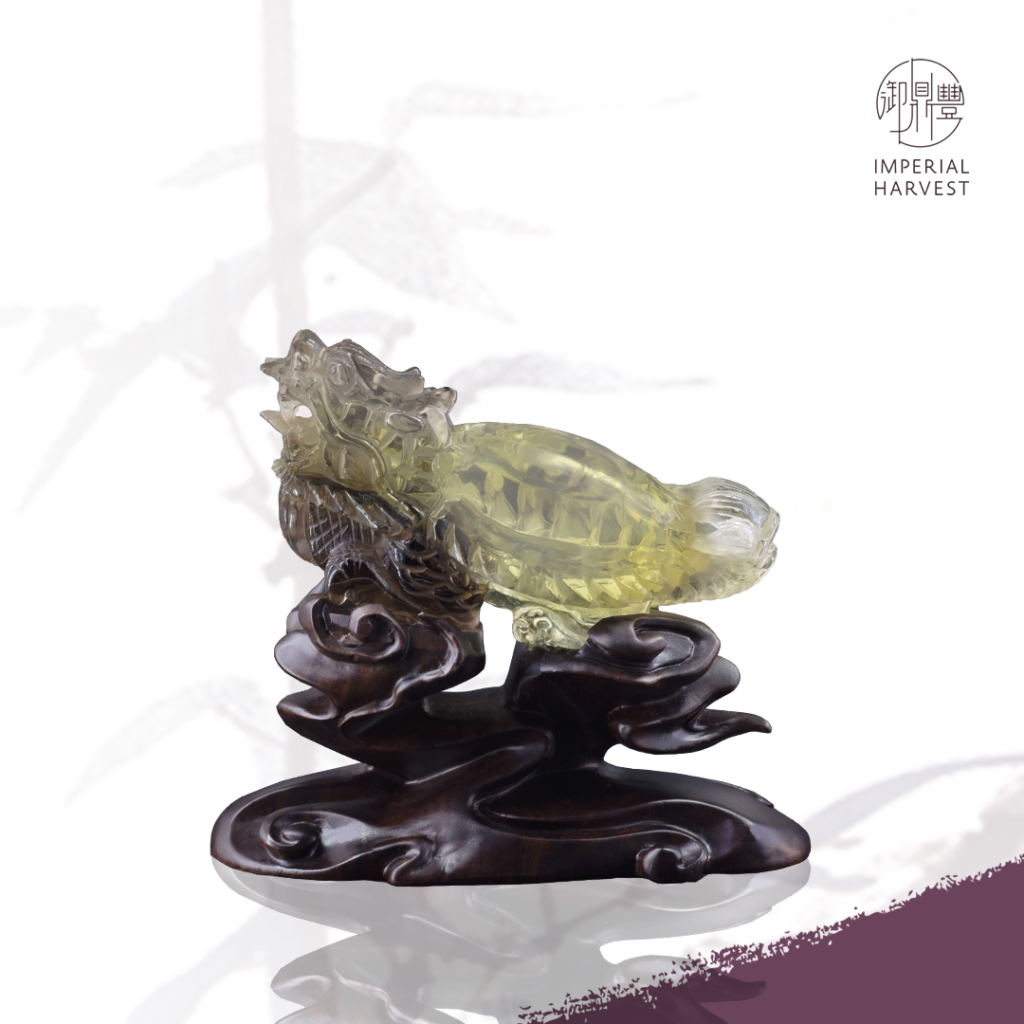 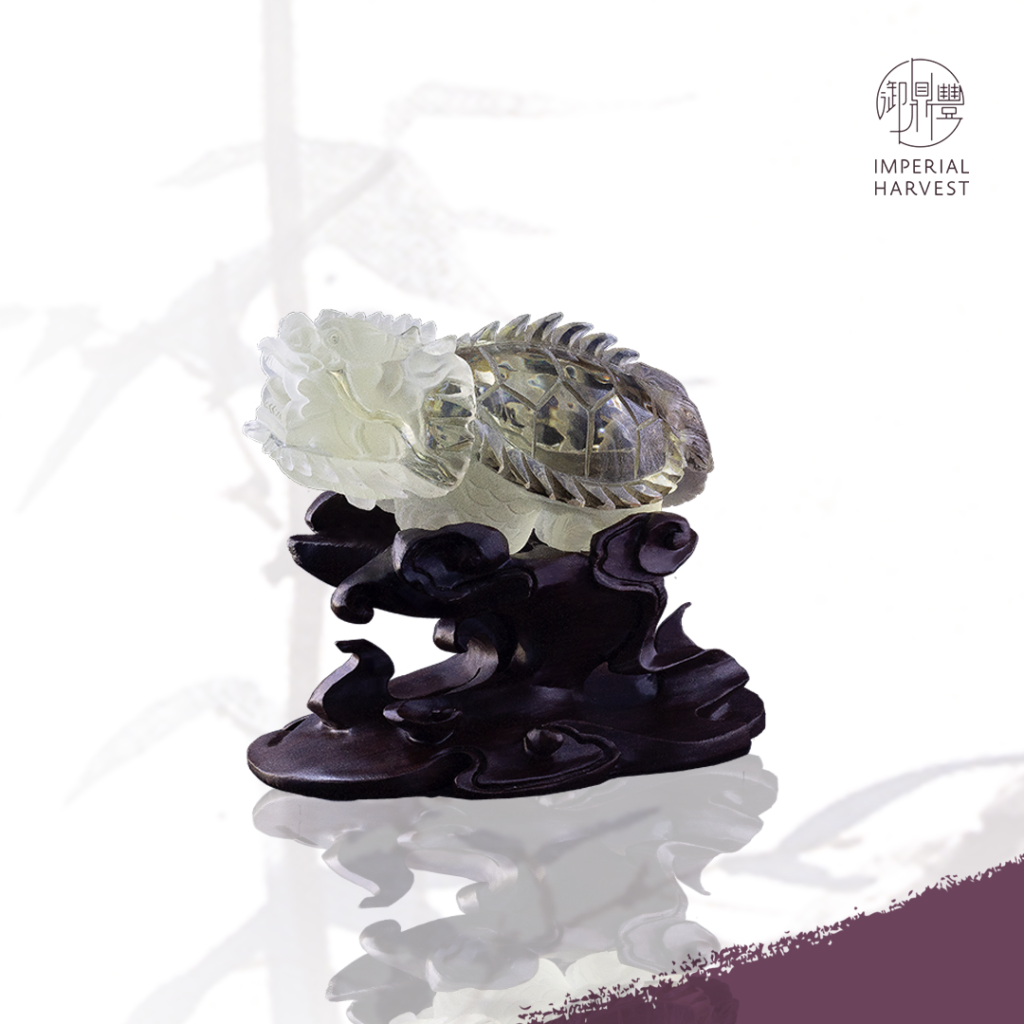 The three-legged wealth or money toad (金蟾), also known as Chan Chu (蟾蜍) is one of the most powerful mythical creatures that is known to enhance wealth luck.

Legend has it that this mythical creature emerges every full moon to bring with it wealth and good fortune. It is one of the most prominent symbols of prosperity as it ushers in a flood of wealth and abundance.

The Golden Toad not only attracts wealth but also serves the purpose of protecting your current wealth and bad luck. Placing the Imperial Harvest Golden Toad crystal can bring a constant flow of money and golden opportunities into your home or workplace.

In addition, the Golden Toad is also beneficial in enhancing descendant luck. It promises an excellent future for the young and improves the vitality of the old. 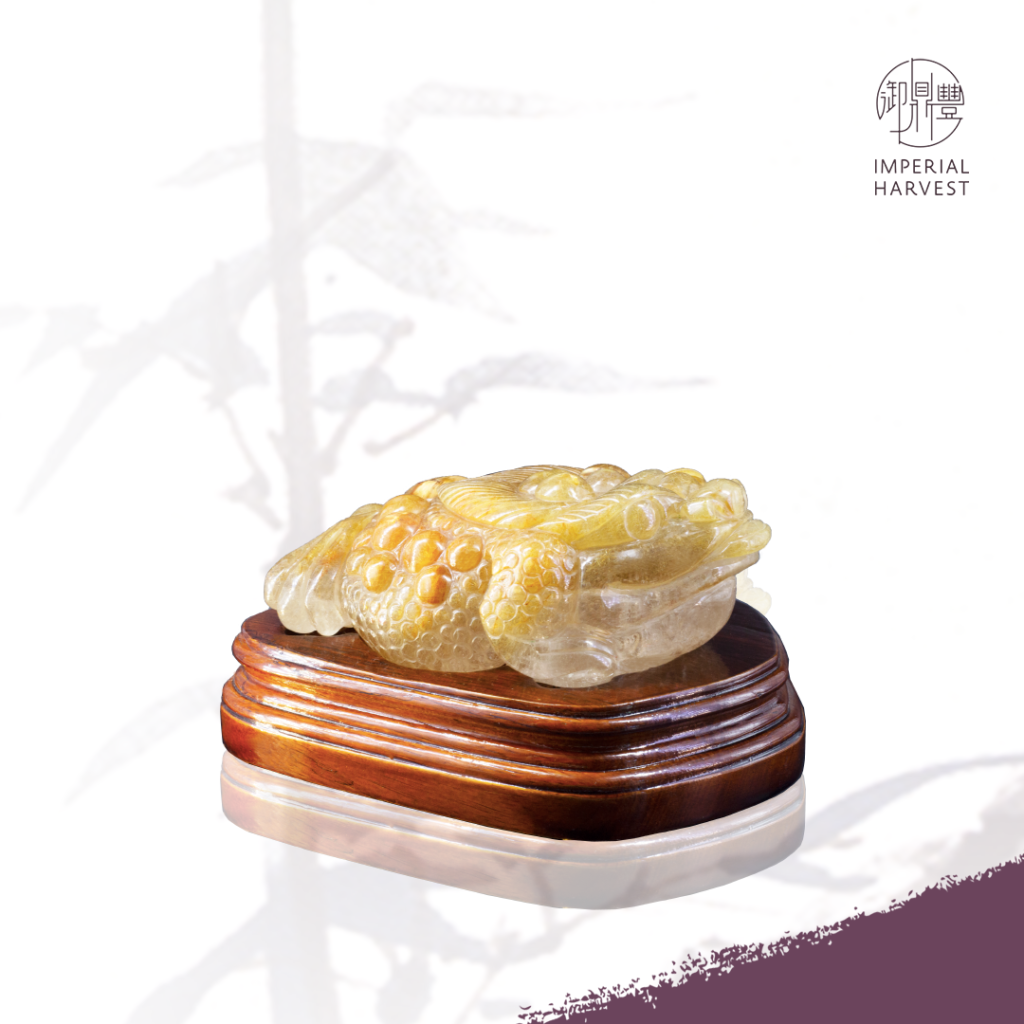 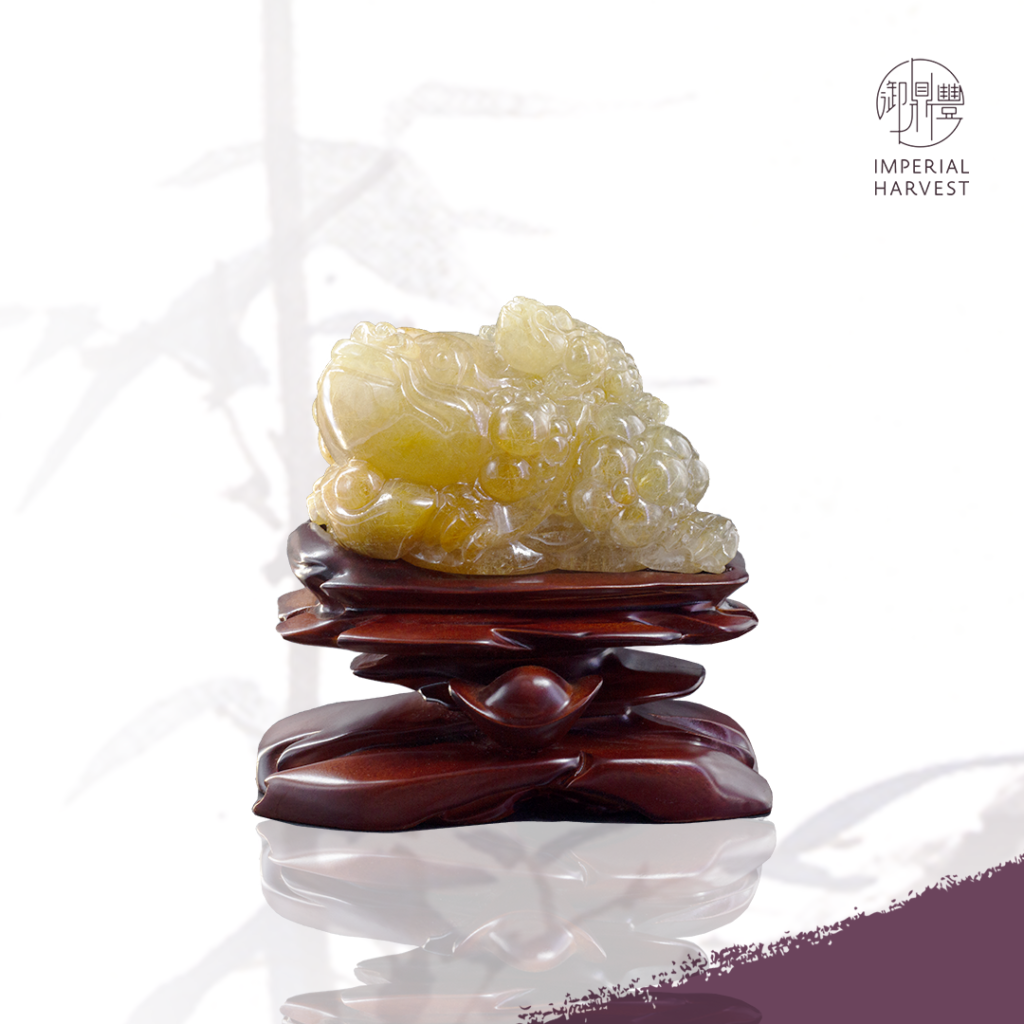 Pi Xiu is a Chinese mythical auspicious creature with the ferocious looking of a dragon head, horse body and unicorn claws; the winged animal’s bold body resembles that of a lion.

Legend has it that Pi Xiu is fond of water, gold, silver and jewels and takes wealth from all directions as sustenance but has no means of excreting it. Because of this, Pi Xiu has the meaning of bringing and retaining wealth and treasures.

Pixiu is also known as the heavenly variation of a particularly powerful and auspicious creature of good fortune.

In ancient China, Pixiu were commonly displayed in architectures such as palaces and halls to ward off inauspicious Qi (陰氣) and to harness auspicious Qi.

The Pixiu has the capability to draw wealth from all directions and prevents it from flowing out. In Imperial Feng Shui, the Pixiu is one of the strongest manifestations of raw auspicious luck, placing the Imperial Harvest-grade crystal in the auspicious water star sector of your home or workplace can help you attract and accumulate wealth. It also has the power to protect you from calamity and dangers.

As Pixiu possesses an insatiable appetite that seems to have no end; this makes it a symbol of extremely good fortune and prosperity as it helps its destined owner to quickly accumulate assets and resources from direct channels as well as unexpected windfalls. 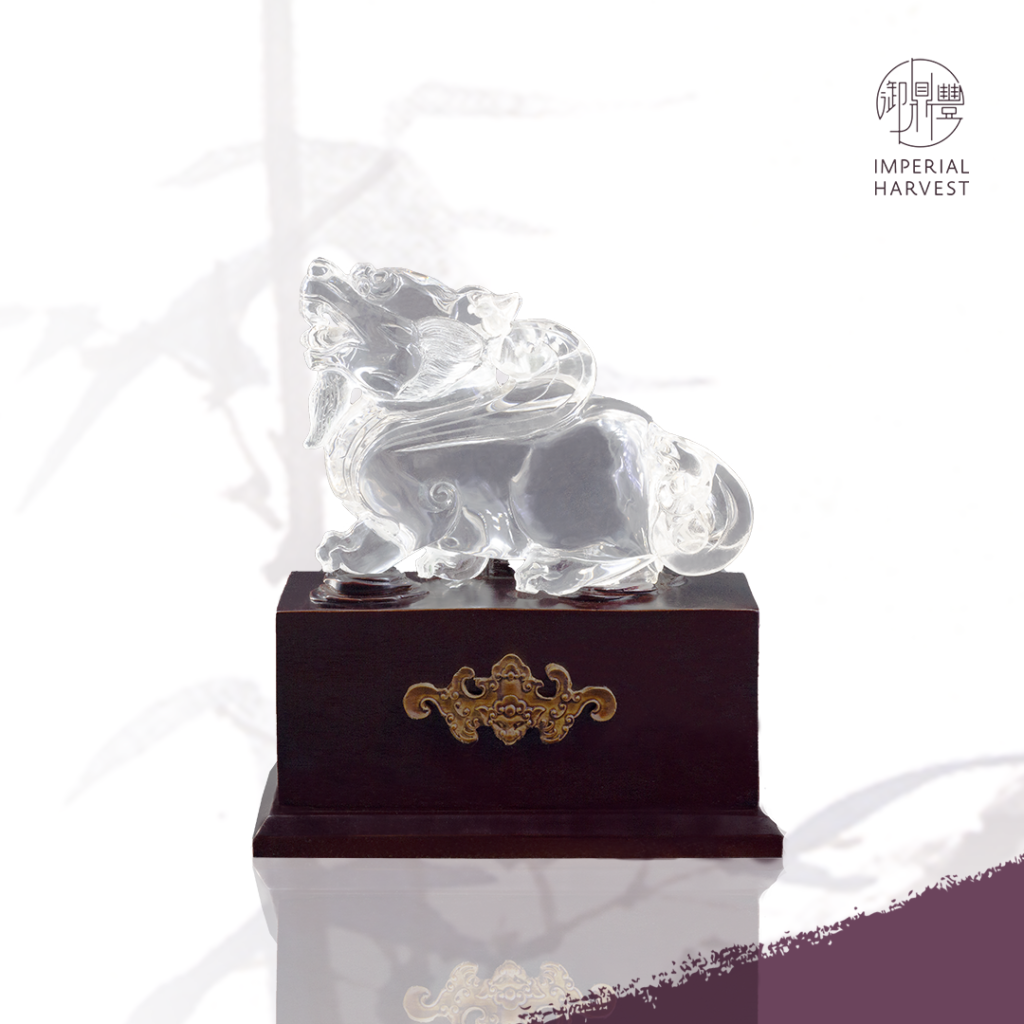 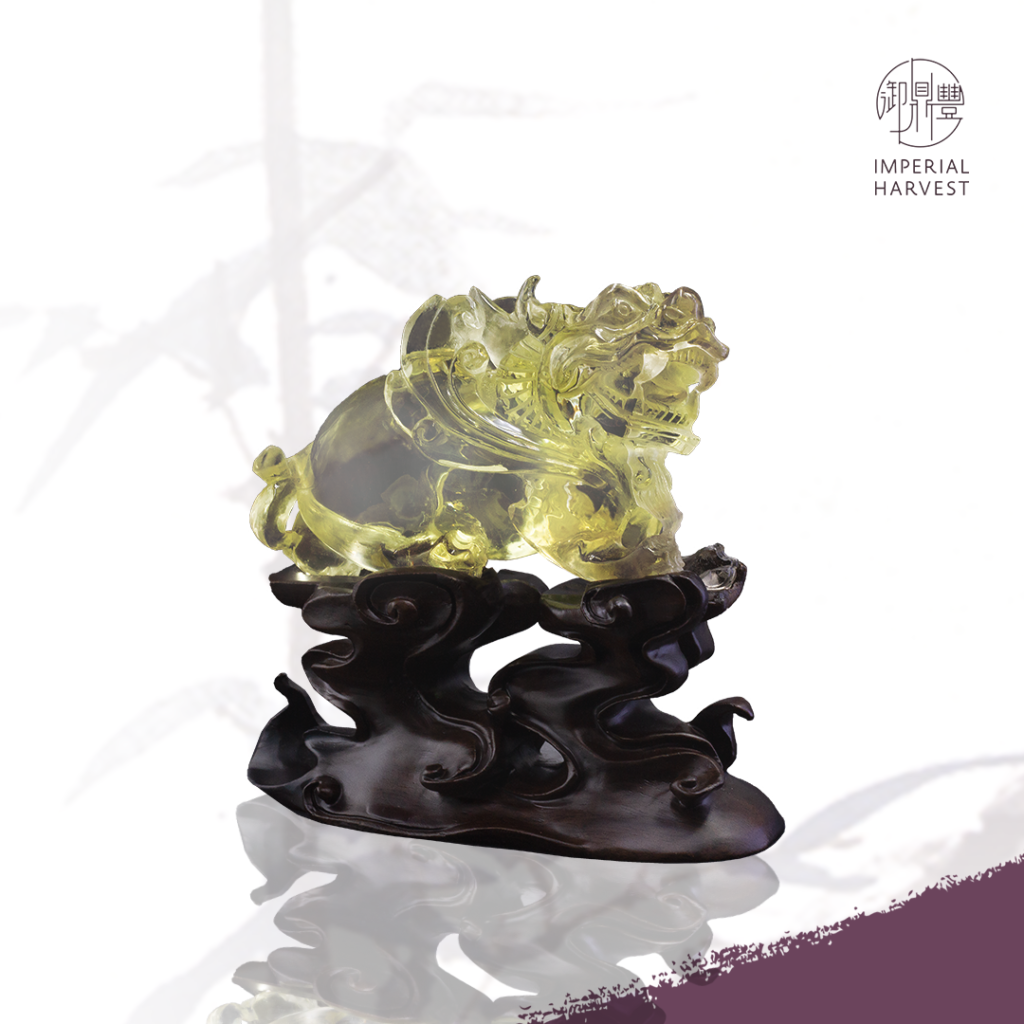 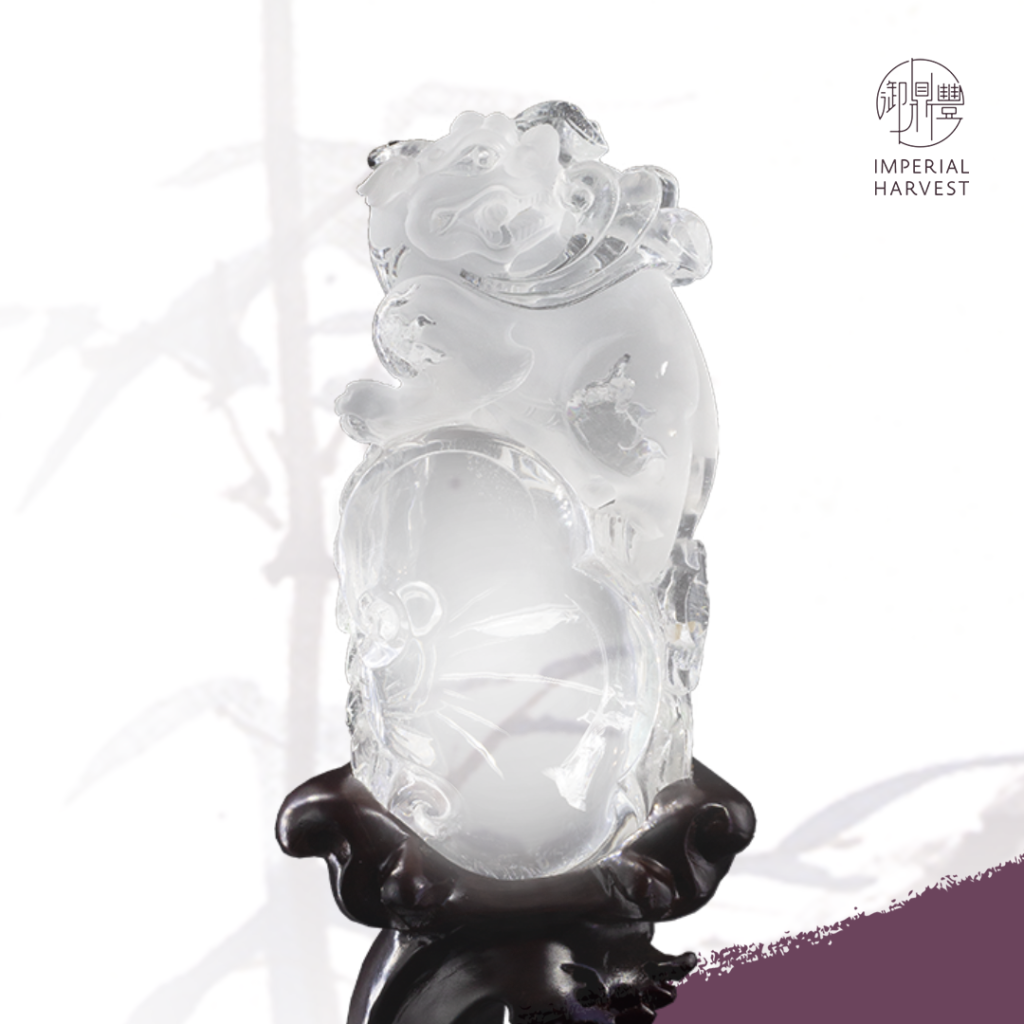 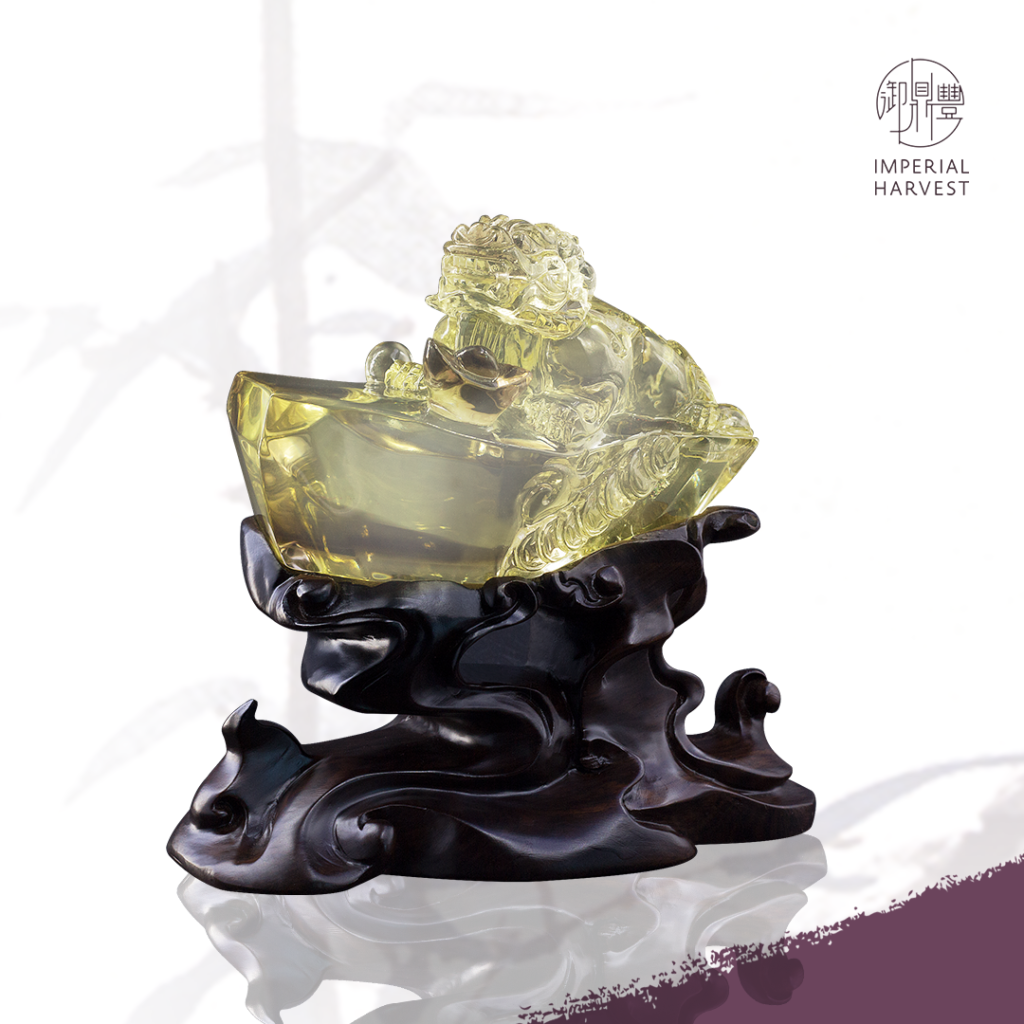 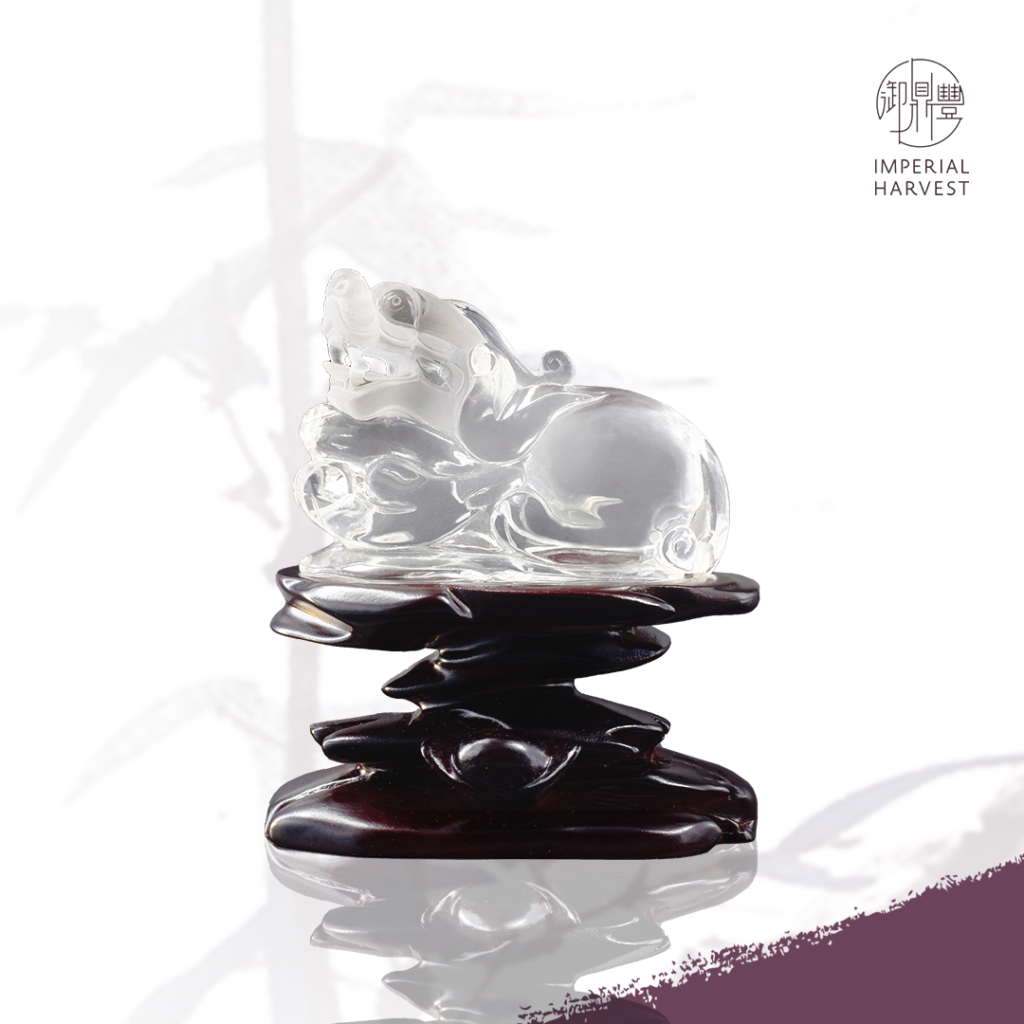 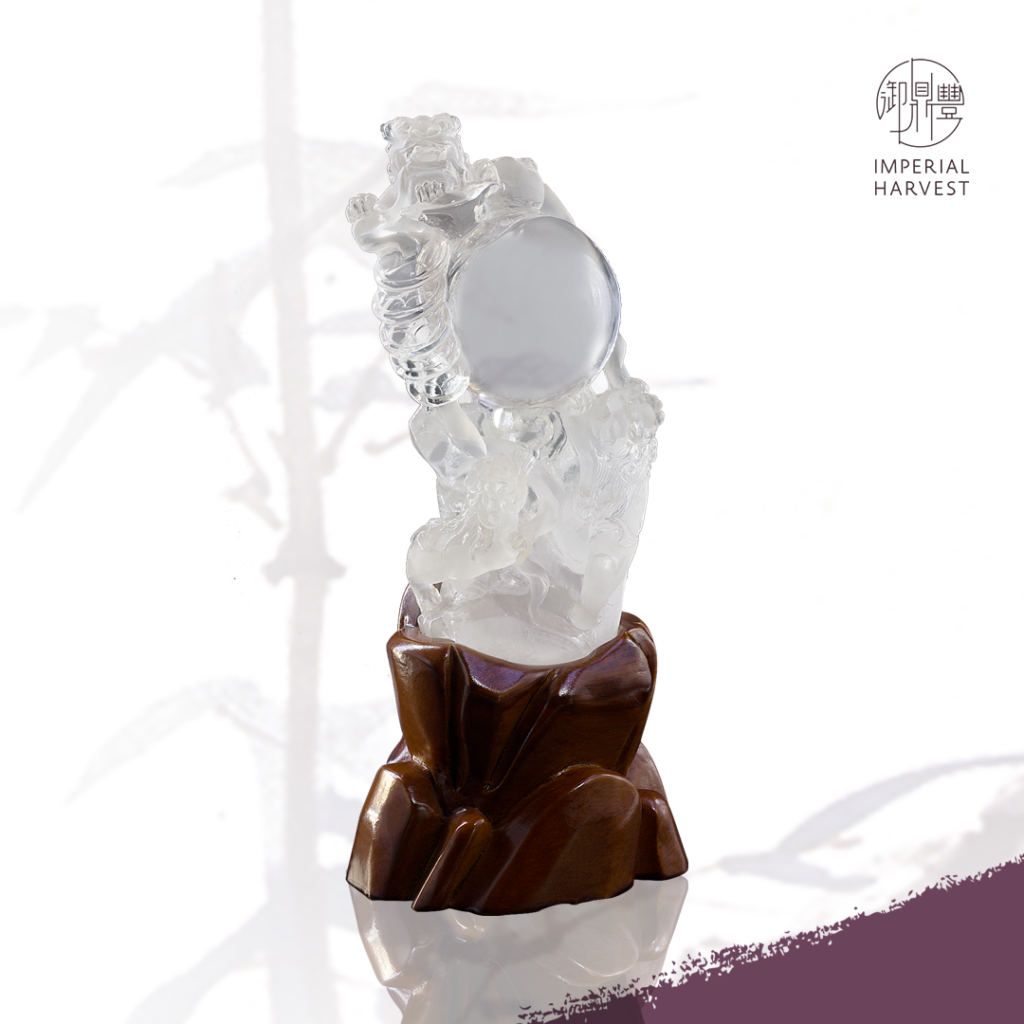 According to legend, Qi Lin is said to have been the guardians at the gates of heavens, preventing any evils from entering. In ancient China, the Qi Lin was highly favoured by the great emperors of China – crystal Qi Lin seals and stamps were even created for official usage in the Imperial Court.

Today, the Qi Lin is used in many large establishments (such as hotels and casinos) as a symbol for wealth security, to promote high status as well as usher in an abundance of customers.

With the head of a dragon and the body of a horse, it is a unique combination of the best qualities of both these auspicious creatures – some of the noble symbols it portrays are power, bravery, high aspirations, and determination.

The Qi Lin, due to its Dragon head, releases ‘sheng’ Qi (which summons success, ambitions and wisdom), and is fiercely loyal to its destined owner, due to its horse traits.

The carp scales on its back brings a plethora of wealth into your homes or businesses, as the carp is a symbol for abundance.

With these decisive traits, the Imperial Harvest Qi Lin crystal is the ultimate symbol of grandeur, wise administration and vigour, allowing its destined owner to sail smoothly throughout their life, achieving financial stability and contentment. 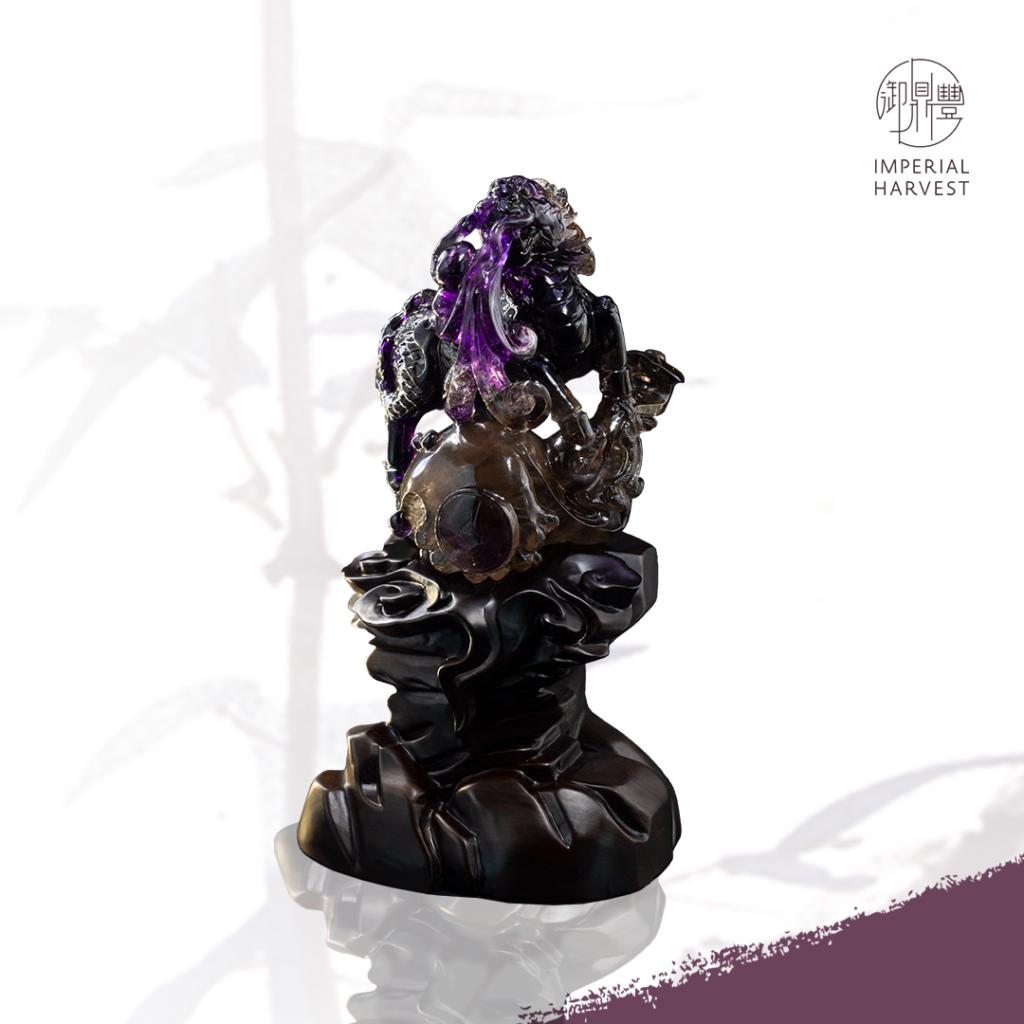 Based on Imperial Feng Shui principles, Imperial Harvest-grade crystal is the authentic method used to activate the auspicious water star position of your home or workplace to usher in wealth and prosperity.

The Imperial Harvest Crystal Collection plays a vital role in helping you adjust and enhance Qi in your home, empowering you and your family with auspicious Qi 24/7, ensuring harmony and relationship bliss.

Placing the Imperial Harvest crystal in the auspicious water star position of your workplace will empower you with inspiration and powerful benefactor support. For sales professionals and business owners, this means that you will be presented with multitude of opportunities that will bring your business to the next level as you achieve massive sales and team growth. 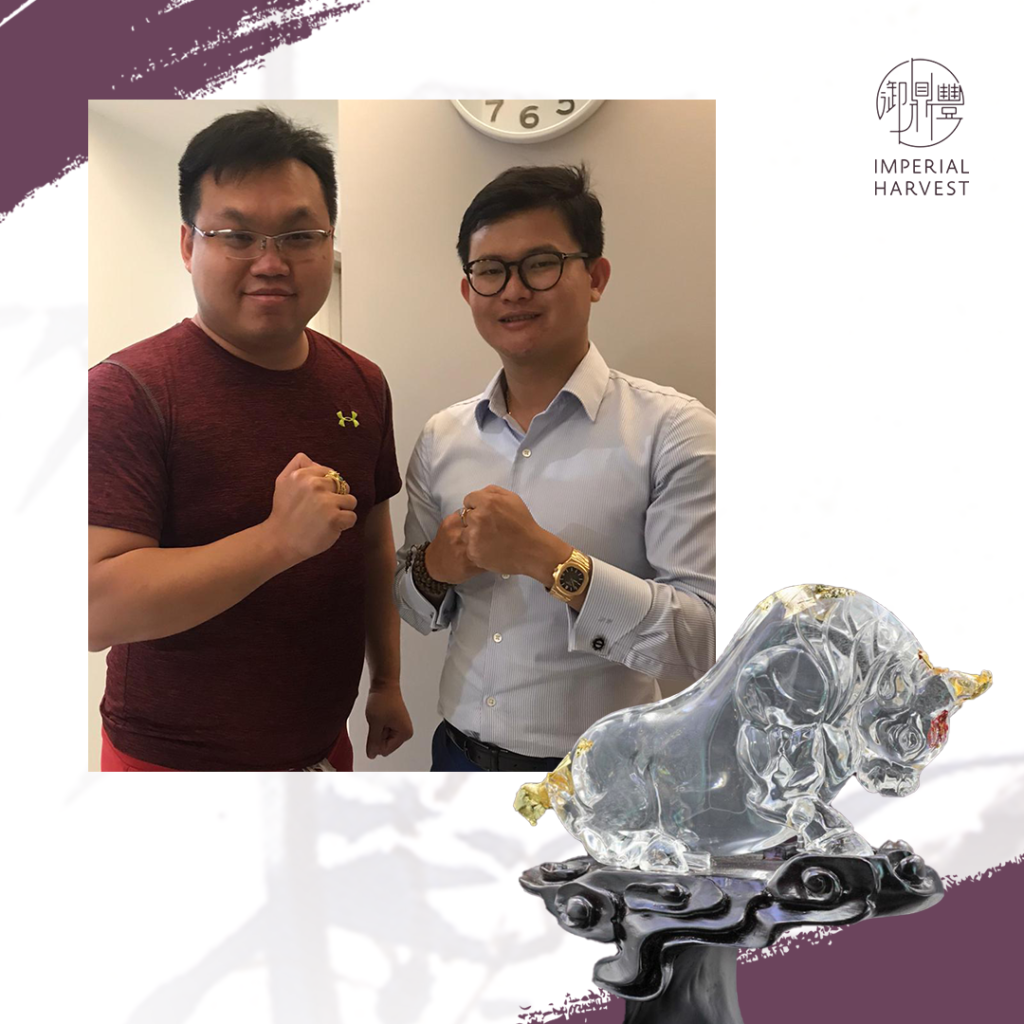 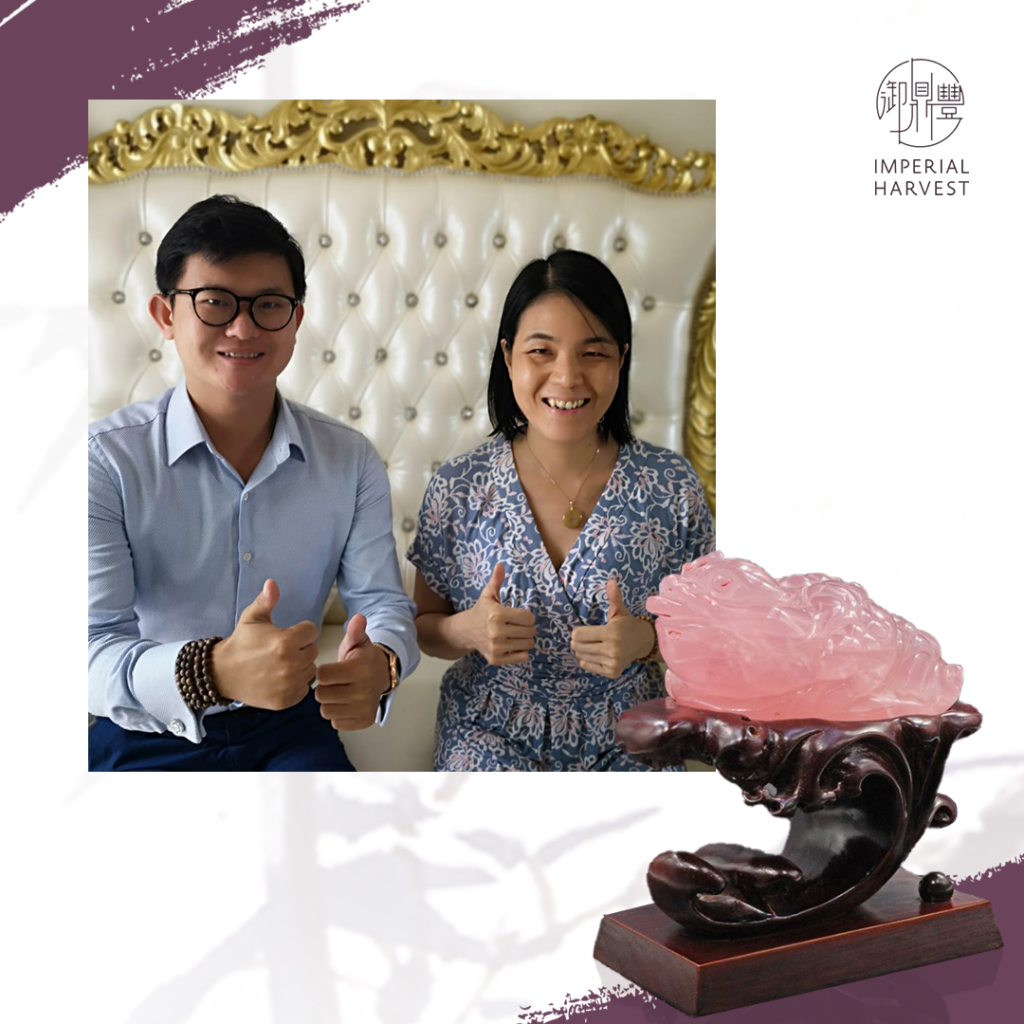 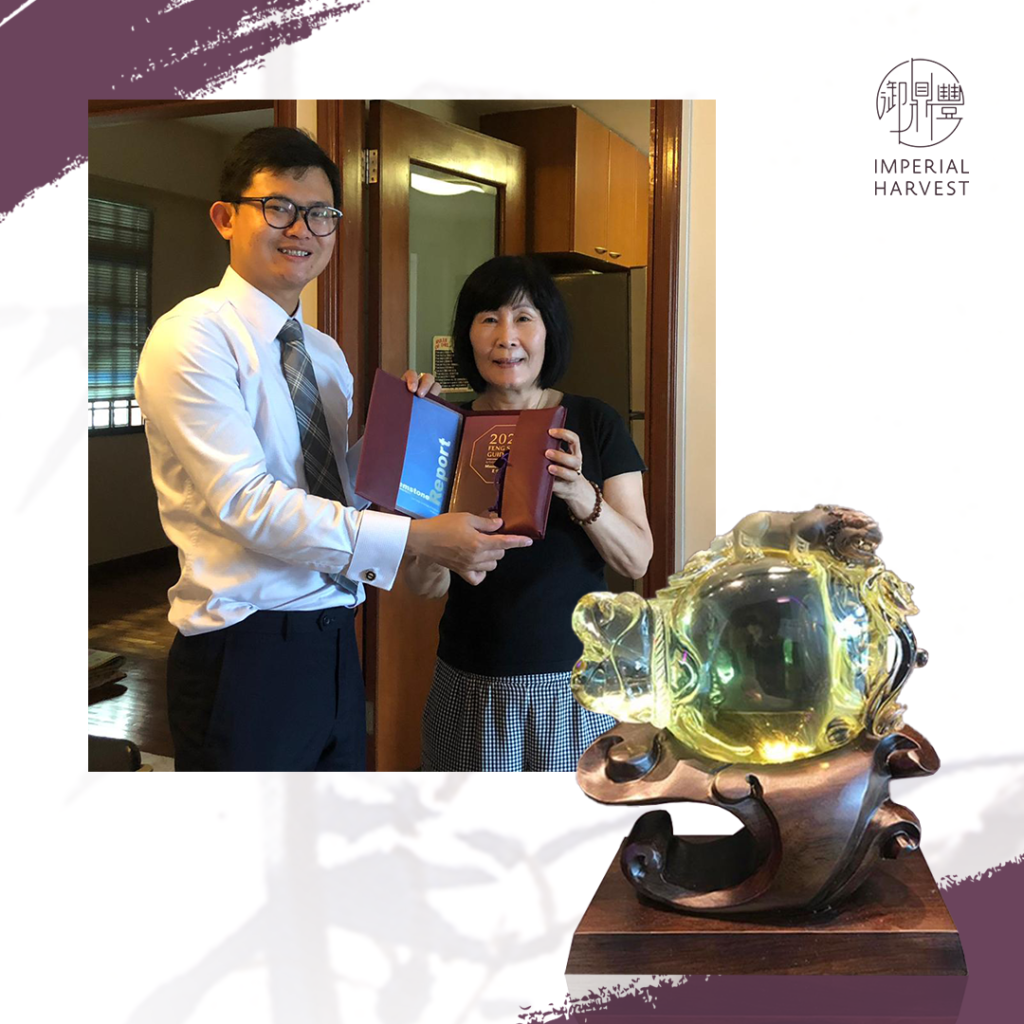 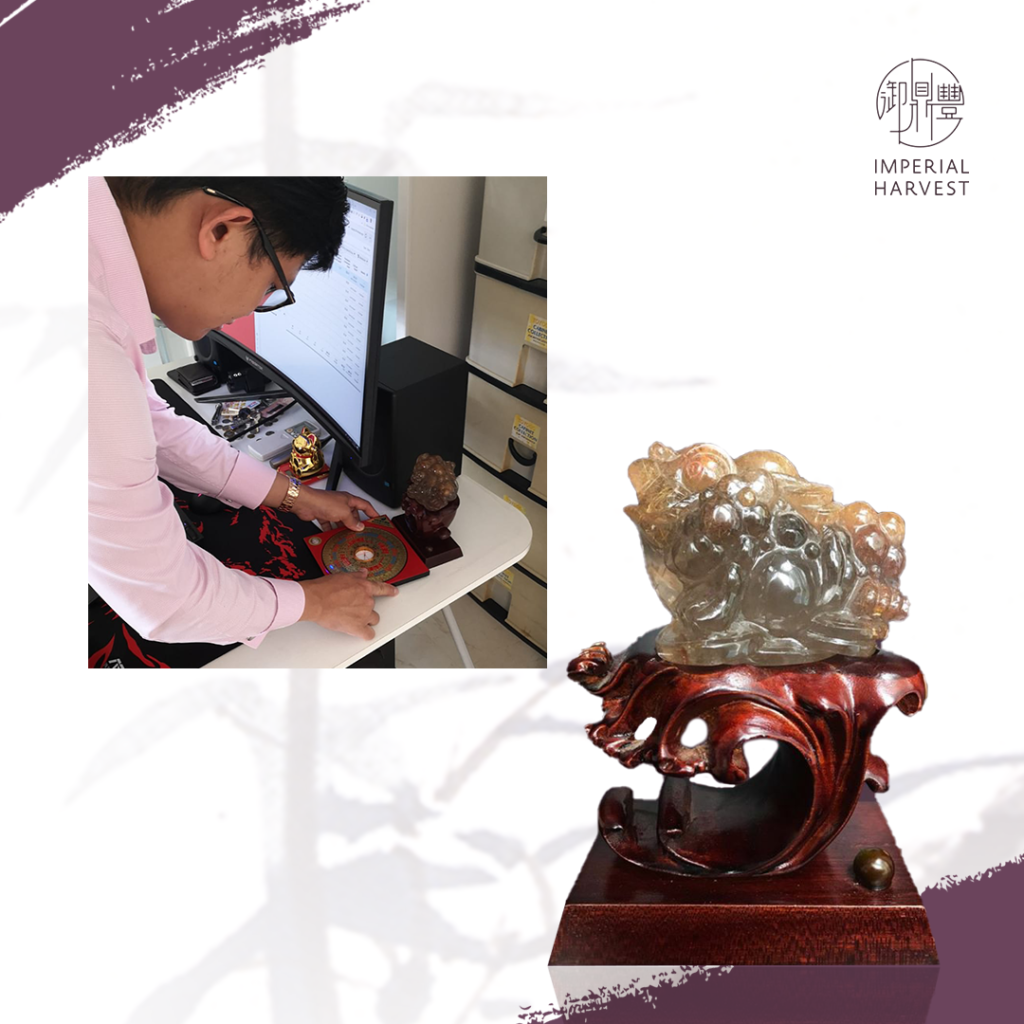 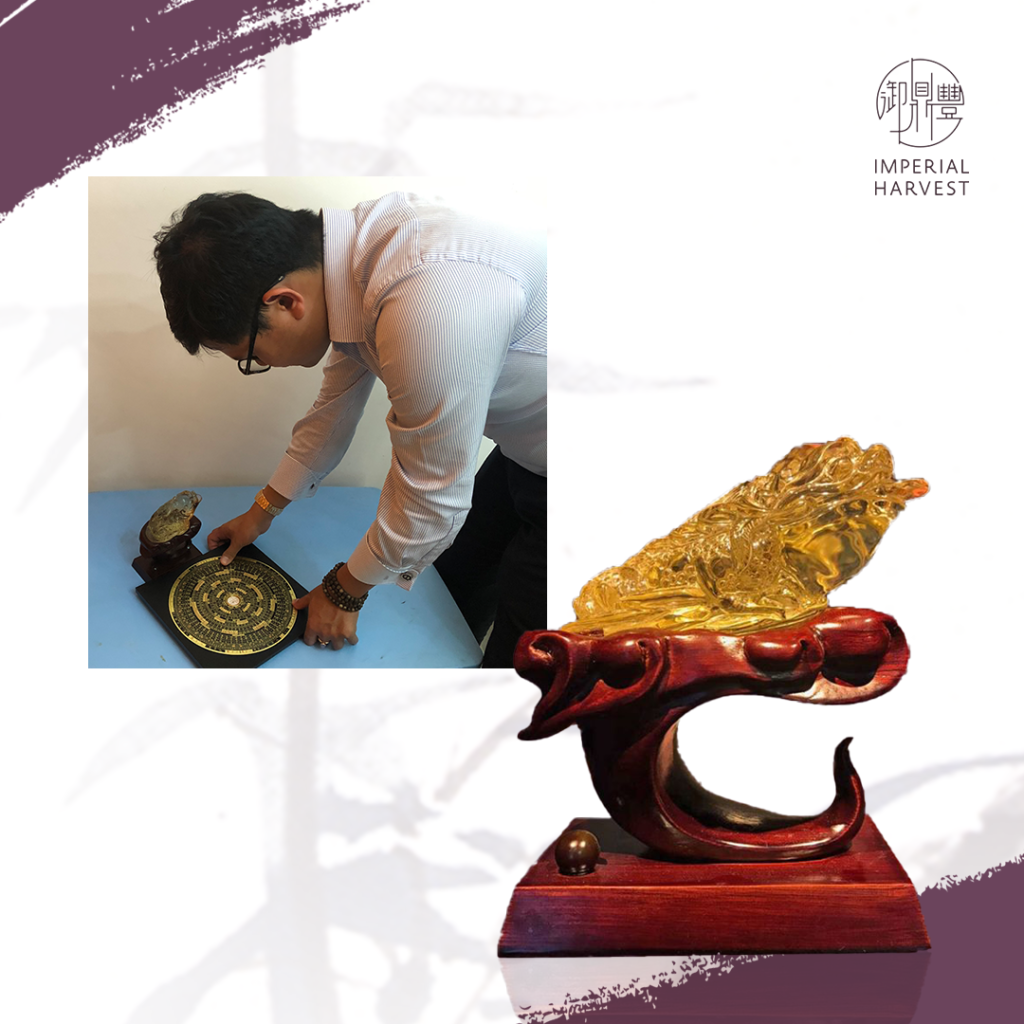 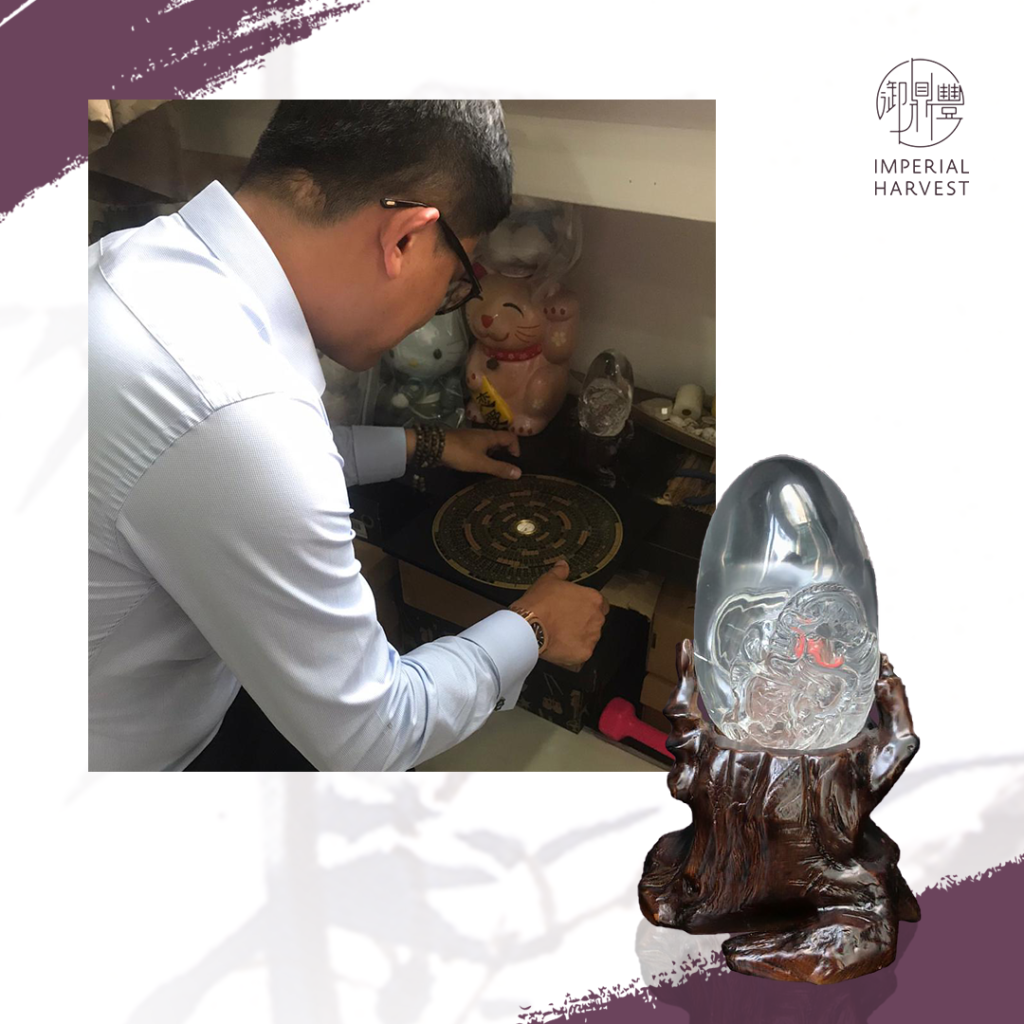 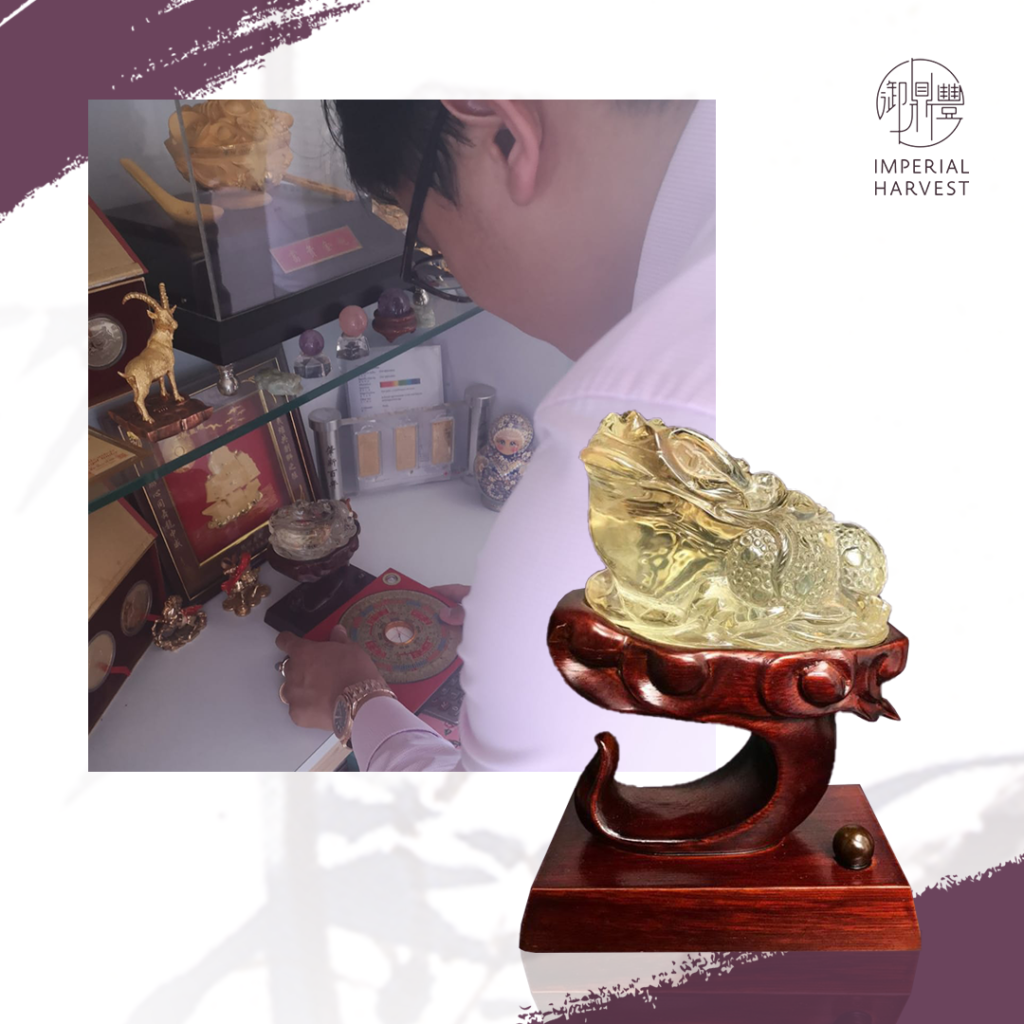