For centuries, jadeite has stood as a symbol of high prestige and supreme wealth. Across the annals of history, jadeite’s allure has inspired mythologies and cultural reverence in different communities around the world. The history of this exquisite stone can be traced to ancient Mesoamerica — with the Olmecs, Mayan and Aztec civilisations having fashioned ceremonial objects and jewellery out of jadeite for both religious and medicinal purposes.

Closer to home, jade has traditionally been the gemstone of choice in ancient China, playing a consequential role in China’s dynastic history. Prized in circles of high nobility, jade treasures were revered as a symbol of imperial spirituality, purity, status and health for over 9000 years. Reflecting its exalted status and unique features, jade treasures adorned Chinese royalty and members of the imperial court’s governing elite. Adding to its high regard is the fact that the Chinese character for “emperor”, “王” appears nearly identical to the character for “jade”, “玉”.

Throughout Chinese history, jadeite has been laboriously carved into all manner of objects, ranging from jewellery to desk ornaments to religious artefacts. Their historical significance has often been used to study the political and social progress and climates of ancient Chinese life.

Having established a distinction between nephrite jade and jadeite more than a century before their Western counterparts, the understated charm of jadeite has captivated Chinese collectors for centuries. While the term “jade” is frequently used interchangeably to describe nephrite and jadeite, both are distinct mineral species with different internal structures and properties. As such, nephrite and jadeite are highly prized for different purposes. With its unsurpassed beauty and uniquely lustrous quality, jadeite is undeniably the rarer of the two. 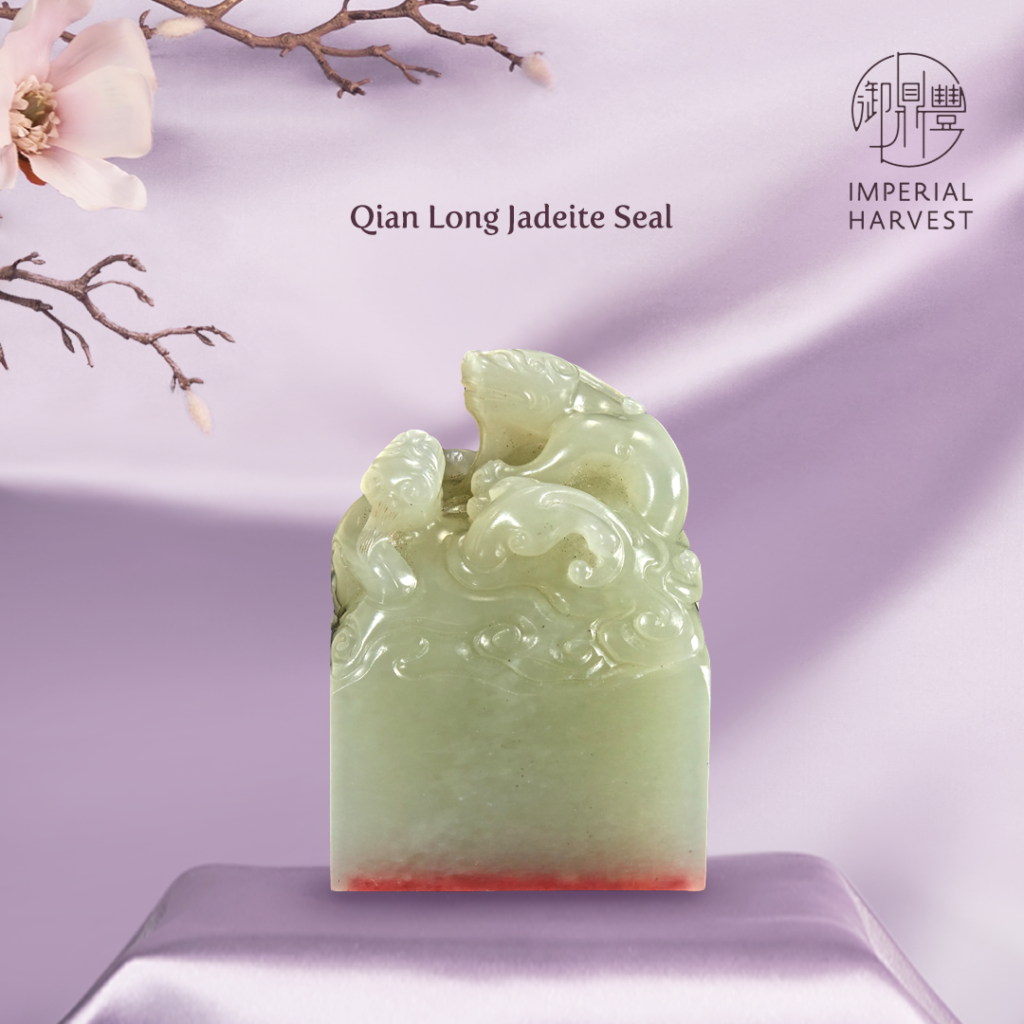 The deep admiration of jadeite is perhaps best exemplified by Emperor Qian Long, who highly favoured the gemstone’s rich hues and went to extraordinary lengths to obtain it. During the golden age of the Qing dynasty under Emperor Qian Long’s reign (from 1736-1796), the country of Burma (now Myanmar), had presented the Emperor with a rare and exquisite raw jadeite boulder in a show of solidarity with the Qing imperial court and tribute to his eminent reign. Subsequently, jadeite was met with an explosion of interest during the 18th century, with Emperor Qian Long signing a treaty with Burma in 1770 and resulting in the importation of top-quality jadeite into China.

Jadeite as an art form

Jadeite’s arrival in China saw it rise to prominence as an important artistic medium. Although the tradition of fashioning jadeite artefacts existed in other communities around the world, China’s millennia-long tradition of gemstone carving had prevailed. The masterful Chinese craftsmen of the late 17th to 19th centuries created masterpieces of jadeite that remain unsurpassed in concept, design and technical prowess. 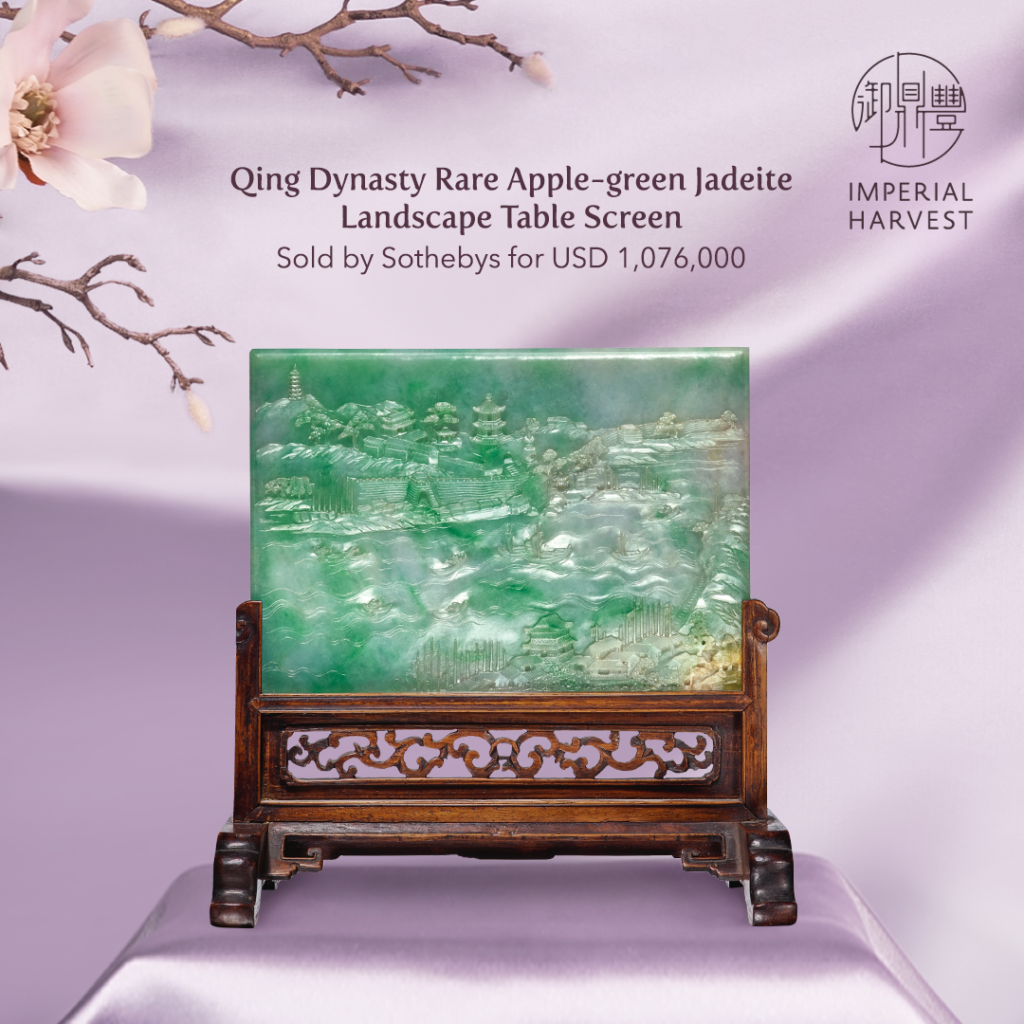 For artisans to assess the quality of jadeite, it is required that they cut through the rough boulder. In carving and crafting jewellery or ornamental pieces from jadeite, craftsmen require the usage of large pieces of precious stone. Transforming a raw jadeite boulder into a single treasure that features a uniform translucency, perfect colour distribution and vibrancy is viewed with high achievement due to the intricacies surrounding the crafting process. As such, longer strands of jadeite beads and larger jadeite cuts command extremely high premiums.

As a rare form of artistry and antiquity, jadeite carving calls for the highest echelons of craftsmanship, keen judgement and meticulous precision.

According to Imperial Feng Shui principles, jadeite is a key component in the myriad of earthly treasures used to empower an individual’s unlimited human potential. Given its prominence in the landscape of ancient Chinese empires, jadeite treasures garnered huge popularity and were widely found across the imperial court. During the Qing dynasty, Imperial Feng Shui masters serving Emperor Qian Long went through years of meticulous research and development, eventually unveiling that fine jadeite treasures held positive influences on many aspects of everyday life.

Drawing on the findings of Emperor Qian Long’s Imperial Feng Shui masters, it was discovered that fine and exquisite jadeite pendants balanced the Major Yin, blessing its destined owners with an abundance of good fortune in their endeavours. On the other hand, jadeite cabochons were unveiled to have perfectly balanced an individual’s minor yang, bestowing them with intuition critical in decision-making, and empowering them to seize first-mover advantages.

Amidst Emperor Qian Long’s varied collection of Imperial Feng Shui artefacts lies the Qian Long Jadeite Mountain, a crucial tool in empowering blessed clients towards their goals and aspirations. According to Imperial Feng Shui classics, “Mountains govern benefactors, authority and harmony while water governs wealth” (山管人丁，水管财), alluding to mountains being symbolic of power and benefactor support. Emperor Qian Long’s staunch advocacy of the use of the Jadeite Mountains gave rise to its prominence as an Imperial Feng Shui treasure, harnessing the auspicious mountain landforms to usher an abundance of wealth to those who effectively leverage their auspicious properties.

Each Imperial Harvest jadeite treasure is truly one-of-a-kind, undergoing stringent certifications and inspections for its quality and design before being endorsed by Master David. Both Fine and Exquisite jadeite collections at Imperial Harvest consist of only the finest Grade-A jadeites, albeit bearing several distinctions between both collections. 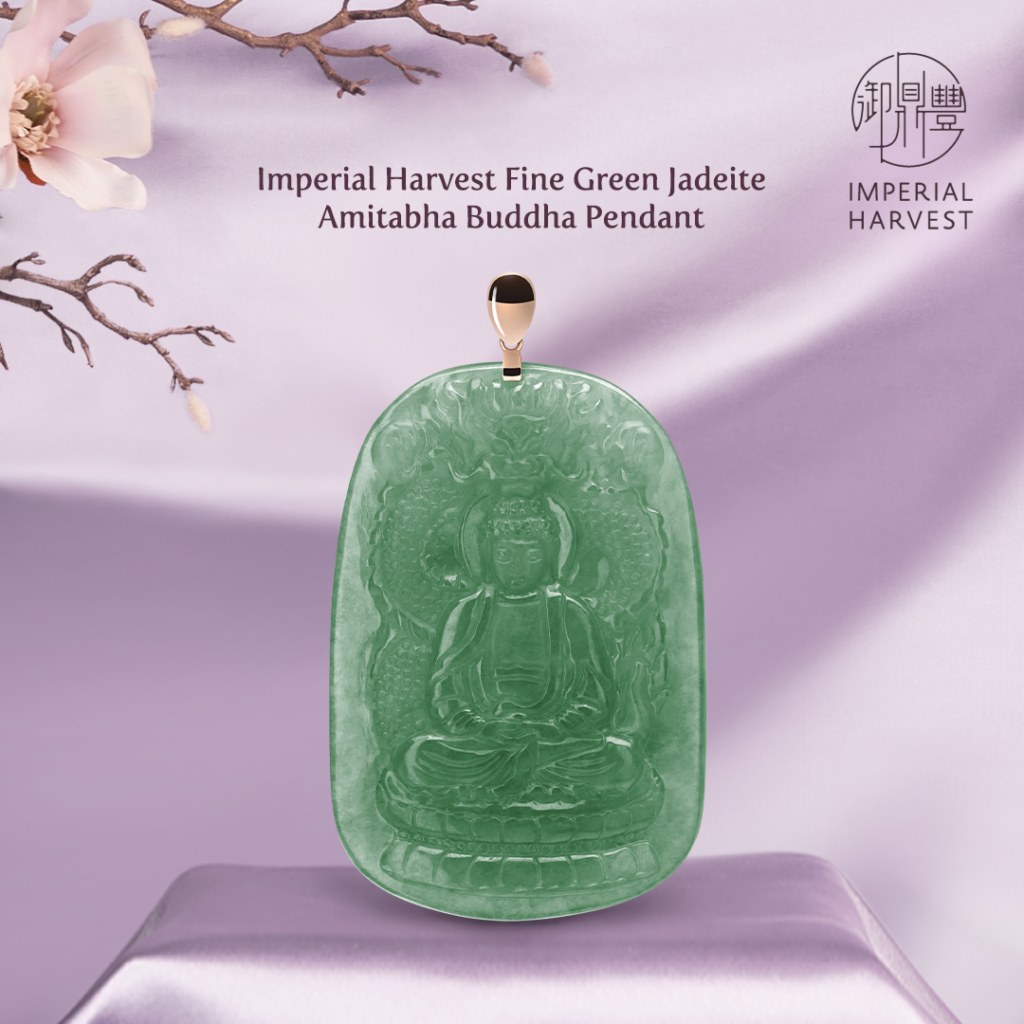 Both Fine and Exquisite jadeite collections undergo many rounds of meticulous refinement and revision in Imperial Harvest’s unyielding pursuit of perfection. Their detailed design elements and extremely detailed finishes are captured by our master artisans, who boast a multi-generational wealth of expertise in this intricate craft. Time-honoured craftsmanship techniques meld with hand-polishing and the introduction of cutting-edge tools, allowing for the incorporation of state-of-the-art techniques that achieve Master David’s inspired vision for Imperial Harvest’s jadeite treasures.

Hewn from the centres of the finest raw jadeite boulders, the Imperial Harvest Qian Long Jadeite Mountains harness the dense and intense Imperial Feng Shui energies from the cores of the jadeite boulders. Meticulously carved and manually polished by master artisans, their unrivalled quality and craftsmanship translate to an unparalleled lustre and smoothness to the touch. 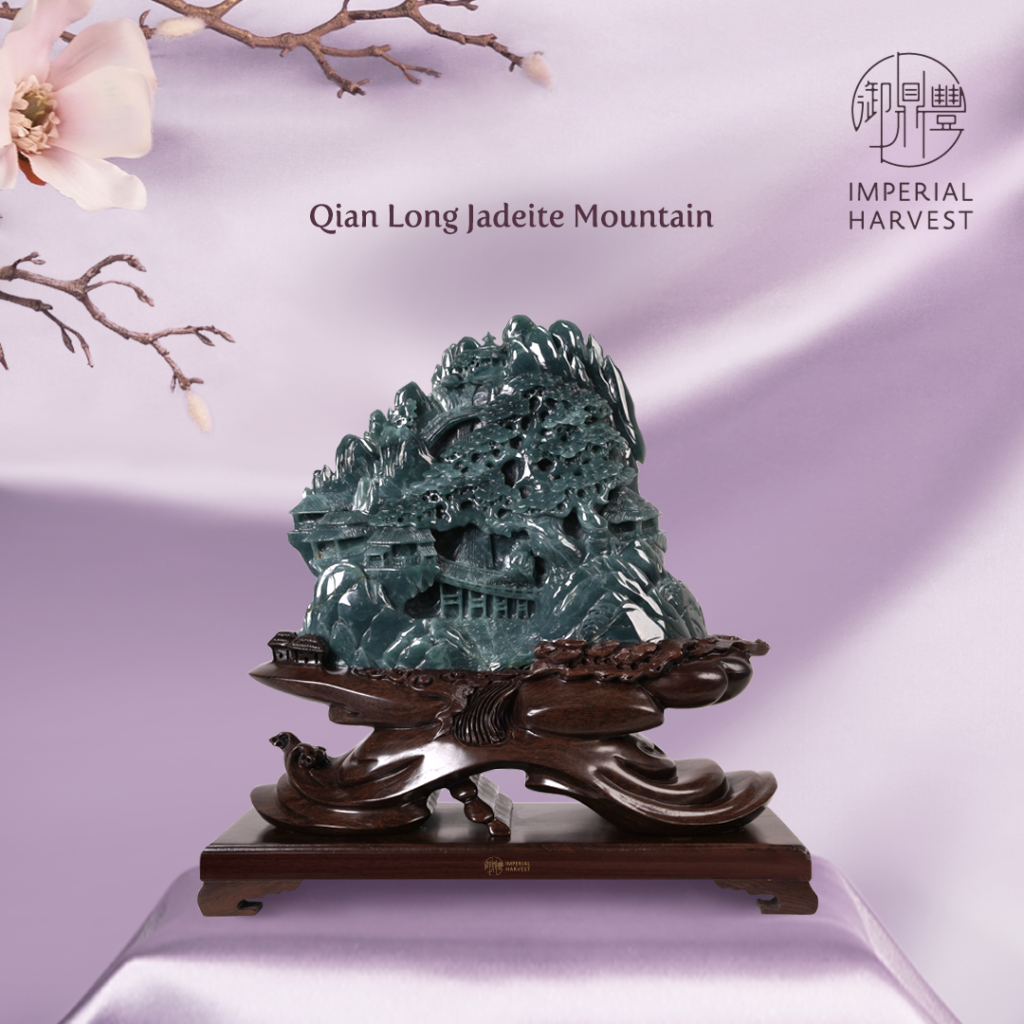 Initially conceptualised by Imperial Feng Shui masters of the Qing dynasty as a practical means of leveraging auspicious mountain landforms, the Qian Long Jadeite Mountain has come to be a celebrated symbol of innovative and masterful artistry of Emperor Qian Long’s Imperial Feng Shui artisans. Unlike other gemstones, jadeite production is a laborious process due to jadeite’s exceptional hardness. The Imperial Harvest Qian Long Jadeite Mountain collection bears witness to the meticulous processes undertaken centuries ago by Emperor Qian Long’s craftsmen, in which elegant and lifelike details are painstakingly rendered onto the jadeite in varying levels of relief, resulting in an exquisite depiction of various textures and scenes within the jadeite treasure.

Today, Imperial Harvest’s timeless reimagination of this classic Imperial Feng Shui masterpiece adorns the homes, offices and properties of numerous blessed clients, attracting influential career and business benefactors that aid them in the achievement of their goals. It amplifies the career success of its blessed owner, allowing them to secure powerful opportunities and positions while maintaining blissful relationship harmony and good health.

Unlike diamonds or emeralds, which possess highly reflective and crystalline properties, jadeite is of a more complex chemical composition. As such, many jadeite connoisseurs believe that cabochon cuts, and other smooth, rounded shapes best display the water-like, luminous qualities of jadeite. Superlative grades of jadeite possess a dense structure and high translucency, emphasising a soft radiance and depth that evokes a sense of tranquillity in the viewer. 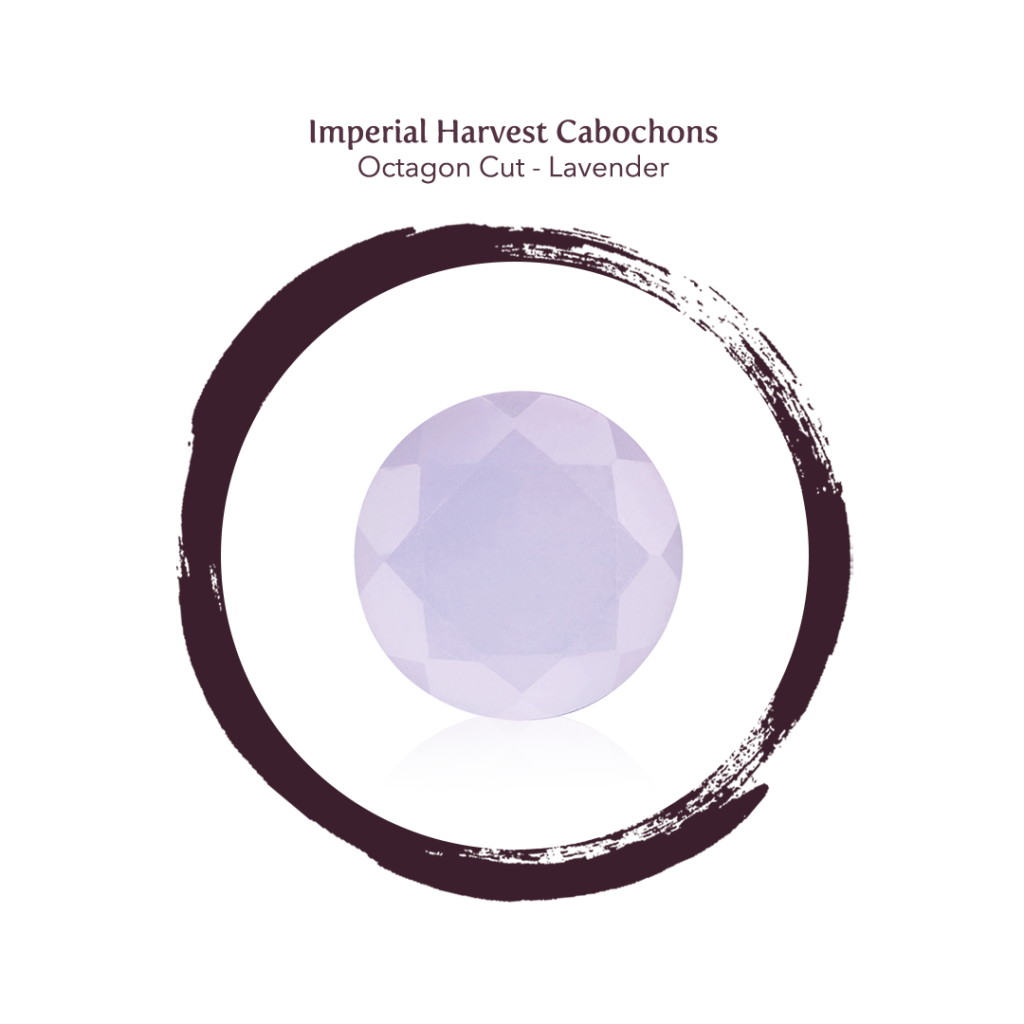 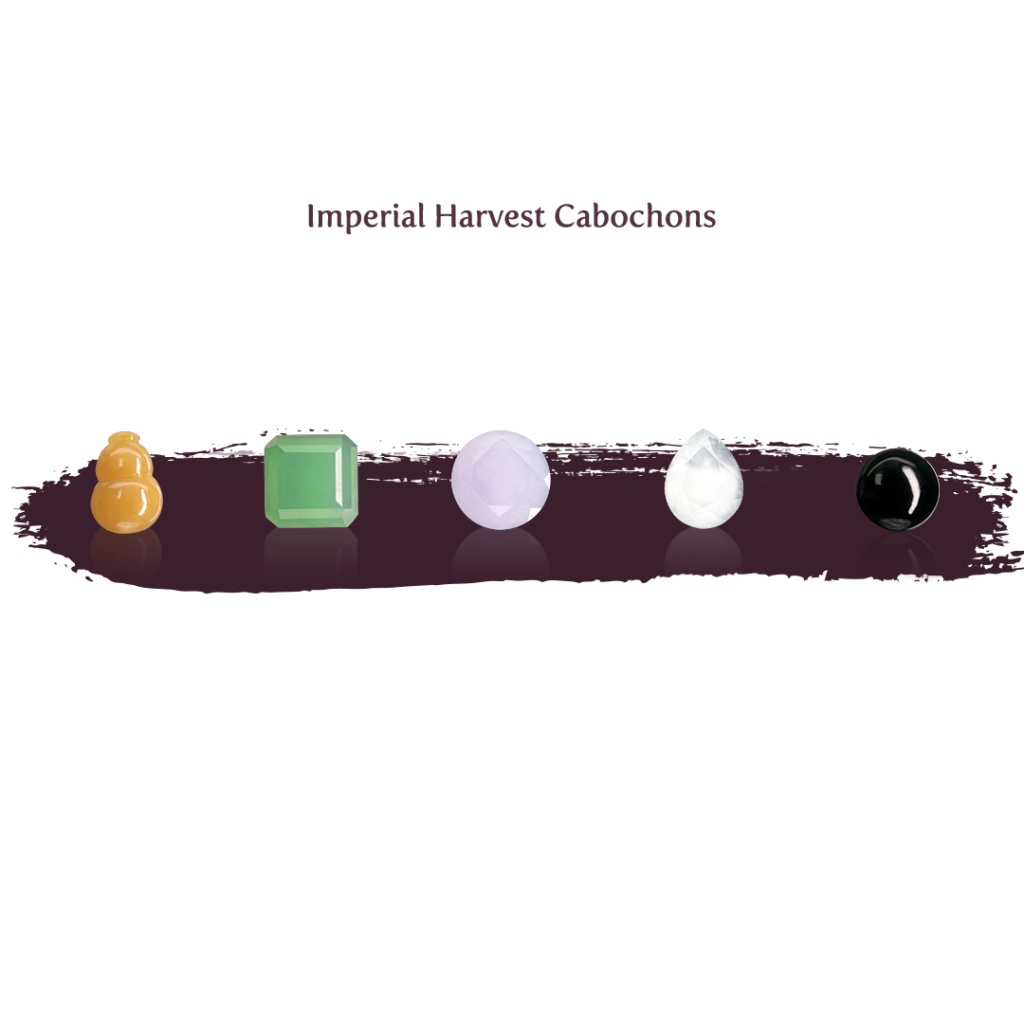 Based on the principles of Two Cycles Eight Periods (二元八运), Period 9 heralds a new chapter in Imperial Feng Shui, in which the Feng Shui cycle spans two periods of time:

Period 9 is represented by the Li Trigram (离卦) and signifies the element of fire. The arrival of Period 9 in 2017 brought an unparalleled rise of assets and industries that bear the traits of the Li Trigram. It also brought the rise of major key trends and opportunities — such as the Metaverse, the rise of digital entrepreneurship, appreciation of virtual assets like Bitcoin, autonomous driving and the growth of luxury assets. 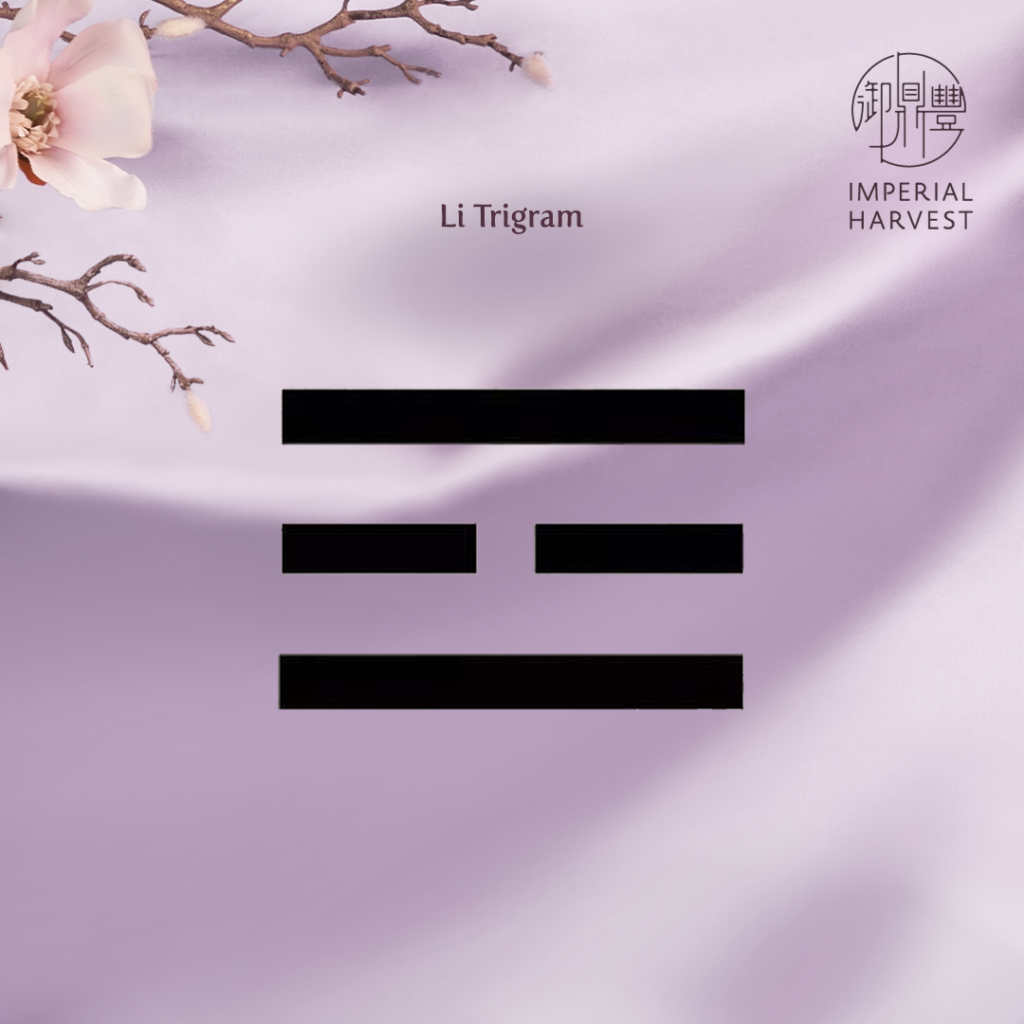 As we are underway into the Early Heaven Luck of Period 9, there is no better time to fully leverage the golden opportunities presented by this Feng Shui period. In harnessing Imperial Feng Shui techniques, our blessed clients can achieve a consistent state of good luck. Get in touch with your dedicated Imperial Harvest consultants to understand how you can thrive and prosper in the Period 9 economy.