A prominent and influential figure in Chinese culture and mythology, Zhong Kui is widely regarded as the Windfall God of Wealth.

As the Windfall God of Wealth, Zhong Kui aids his devotees to achieve monumental financial breakthroughs, guiding them in reaching their greatest goals and aspirations. With his influence, he removes malefactors and obstacles, in turn creating valuable opportunities for his devotees in their journeys towards financial success. 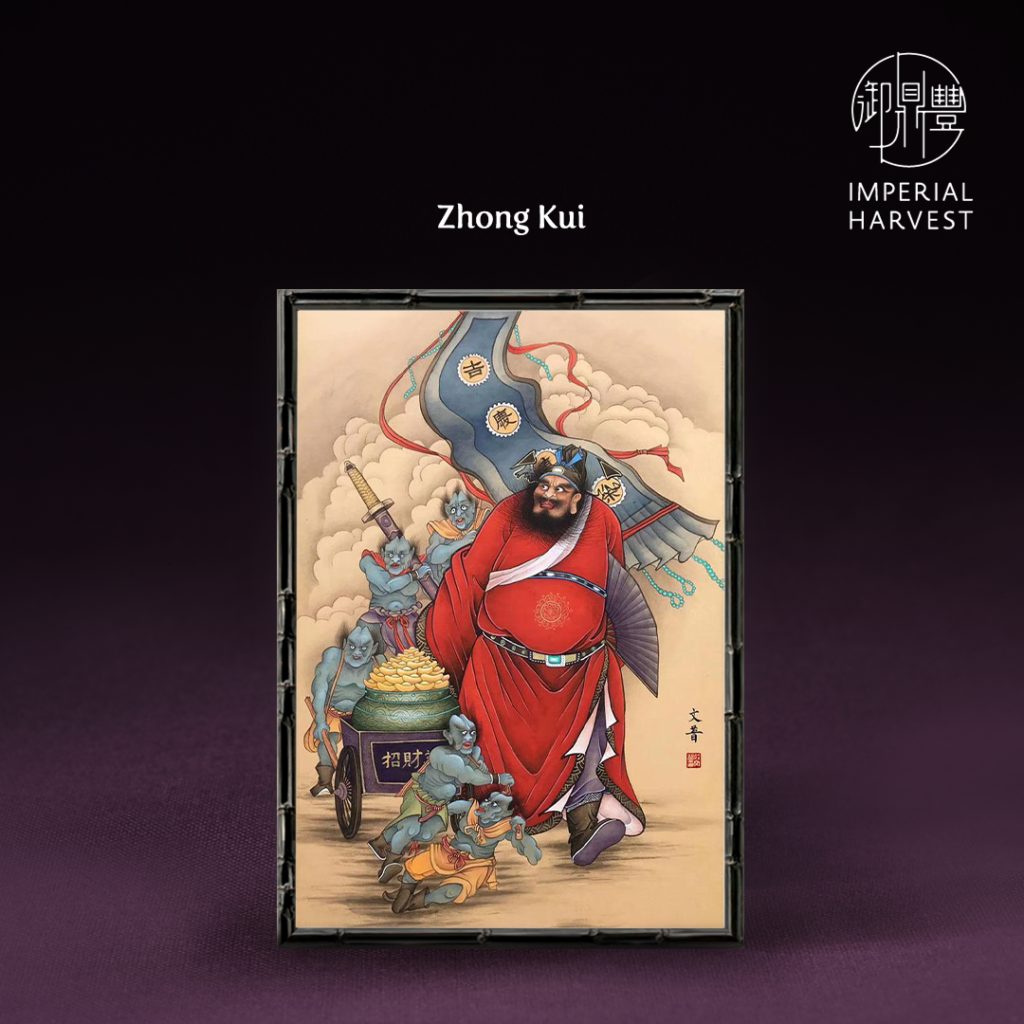 Indirect wealth capacity (偏财库), also referred to as windfall wealth, is the income that is derived from investments, trading portfolios and other infrequent sources of income. The sizeable, yet unexpected nature of windfall wealth often brings explosive returns, aiding Imperial Harvest’s blessed clients in accumulating their assets.

The Imperial Feng Shui masters serving the Qing imperial court had revealed that Imperial Harvest-grade Sandalwood balanced the minor yin (少阴), which governed an individual’s indirect wealth capacity. This seminal discovery was exemplified by the Chinese imperial families, who were known to don beads and pendants of sandalwood to positively influence their good fortune and indirect wealth capacities.

For the first time, Master David melds both powerful indirect wealth elements into a single Imperial Harvest treasure — making for a treasure that ushers countless prosperous blessings to its destined owner.

Each Sandalwood treasure that bears the Imperial Harvest name is derived from India Old Mountain Sandalwood trees at least 80 years of age. The logged Sandalwood is left to ferment, with the Black Meat variation of Sandalwood undergoing a lengthy fermentation period that stretches beyond 30 years. This rarity makes it the most prestigious and sought-after variation of sandalwood. It is dedicated to those who seek wealth and success in their financial portfolios.

Imperial Harvest’s team of master artisans bring this unique Imperial Feng Shui treasure to life, rendering the most intricate details in varying levels of relief. Each artisan wields a wealth of multi-generational expertise in their craft, and remains committed to achieving the highest echelons of craftsmanship. Meticulously hand-crafting and manually polishing each piece of Sandalwood to perfection, the likeness of Zhong Kui is immortalised in exquisite Sandalwood, fully unleashing its formidable properties. 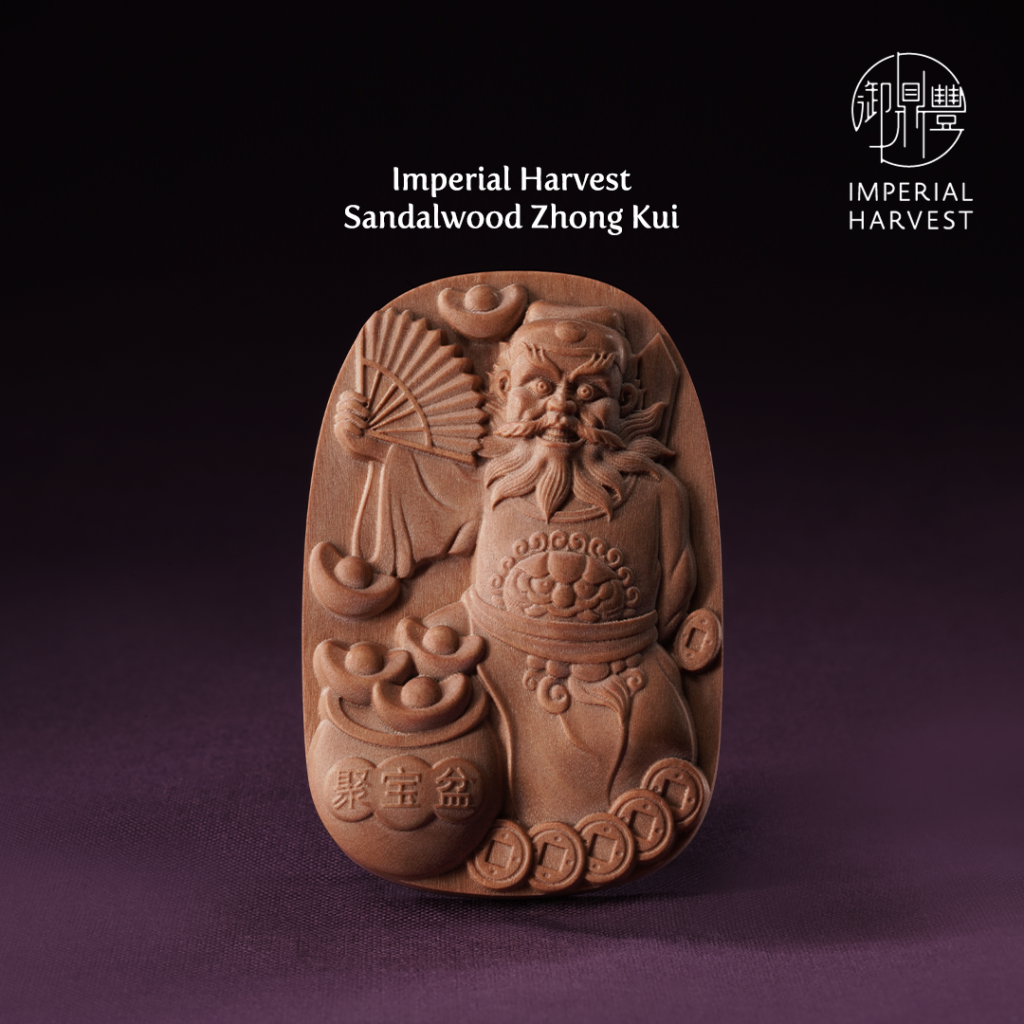 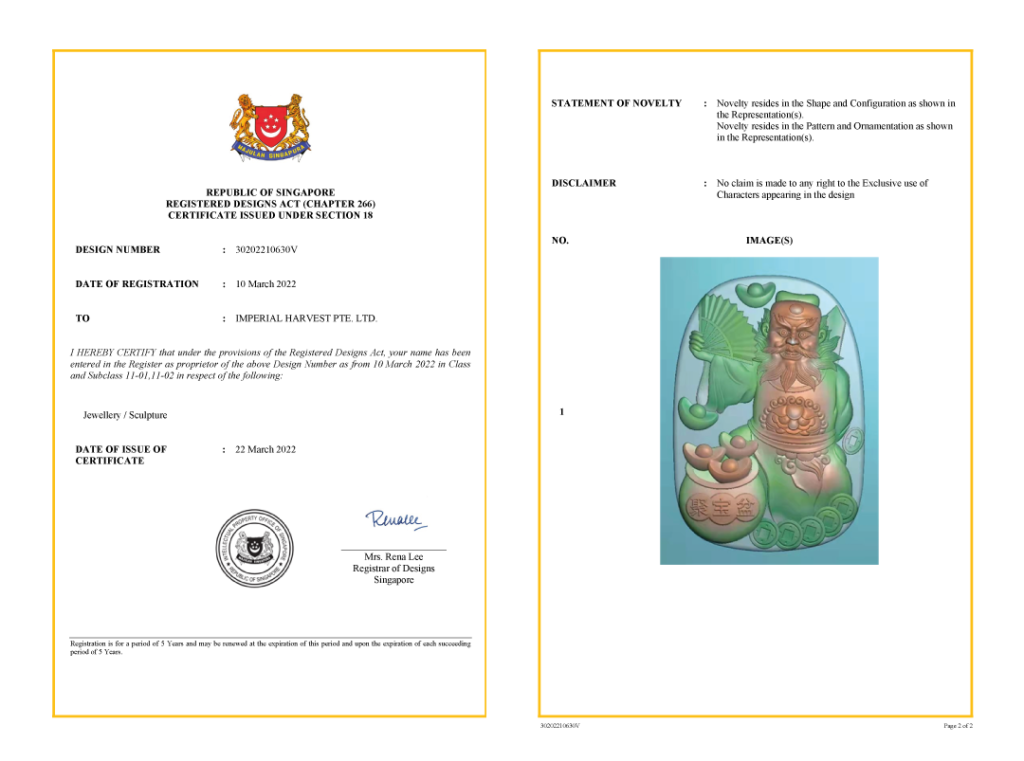 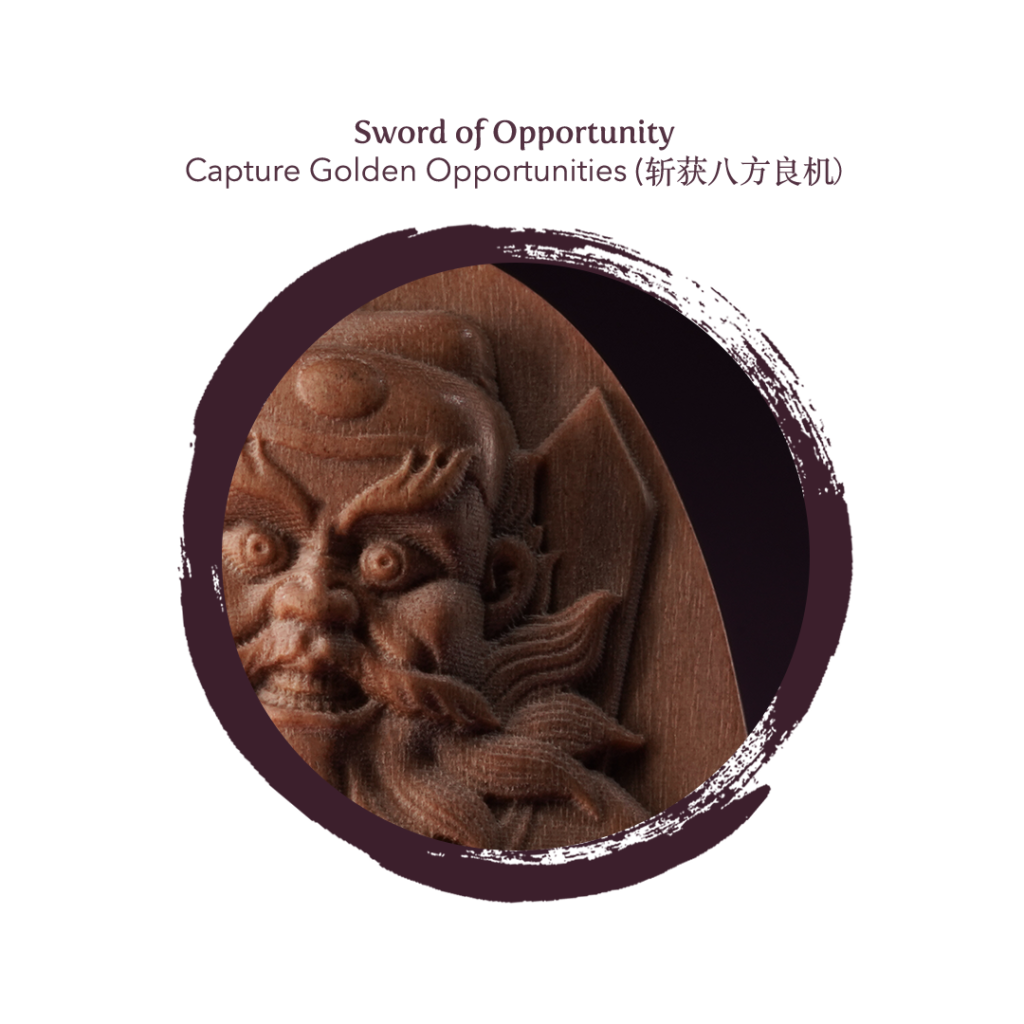 An unparalleled weapon of prosperity in the hands of Zhong Kui, the Sword of Opportunity commands massive influence for its destined owner, capturing transformational life opportunities and pivotal milestones in their journeys.

Zhong Kui is depicted wielding the Sword of Opportunity, expunging unwanted malefactors from his devotees’ paths to success. Through this, the Windfall God of Wealth creates golden opportunities for his devotees, as well as guides them on their journeys towards their ultimate goals and aspirations. 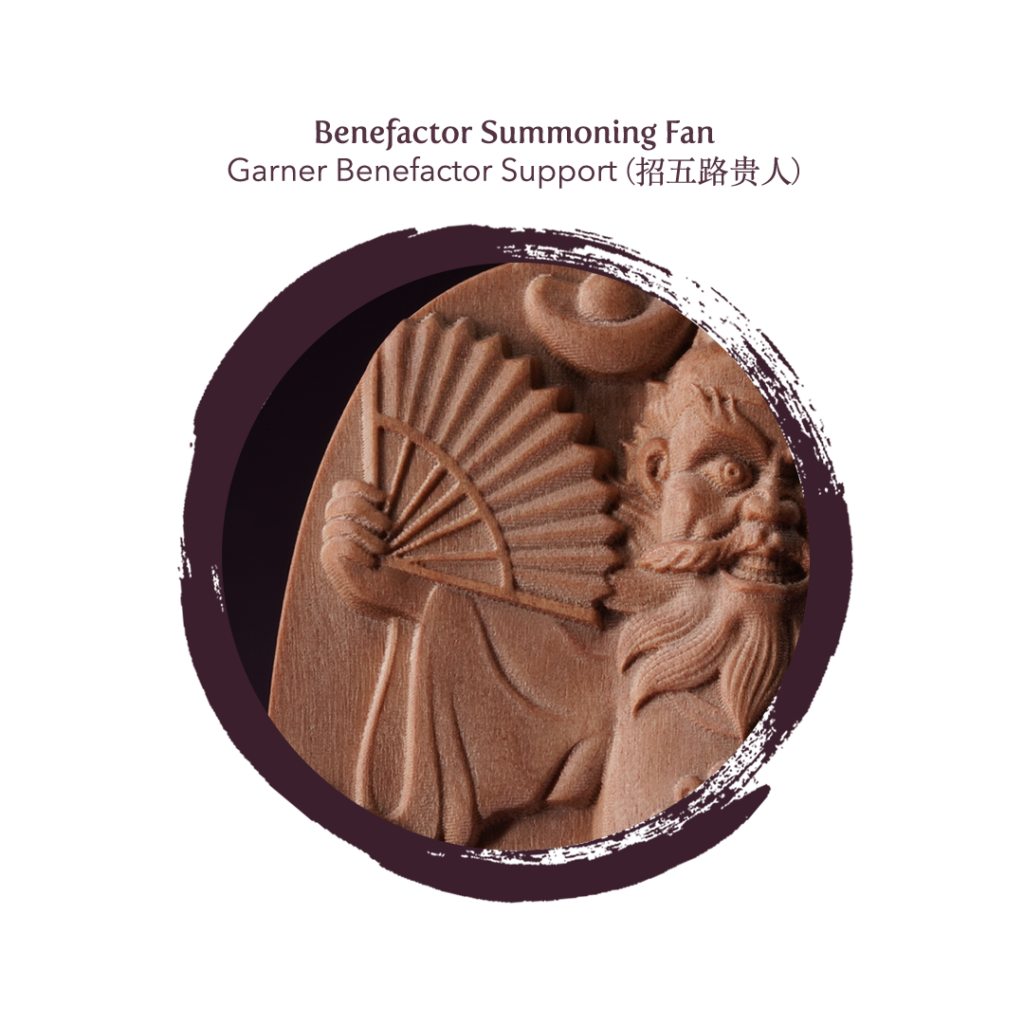 The history of the Chinese fan dates back to over 3000 years ago, around the Shang dynasty (1600 – 1046 BCE), and became symbols of wealth, authority and wisdom.

The Benefactor Summoning Fan that Zhong Kui wields is designed to summon benefactor support from all trades and industries, expanding on its destined owner’s strategic networks. It expands on their strategic networks, fostering the development of new opportunities and sources of income. This valuable benefactor support guides the destined owner upwards on the corporate ladder, and towards resounding success. 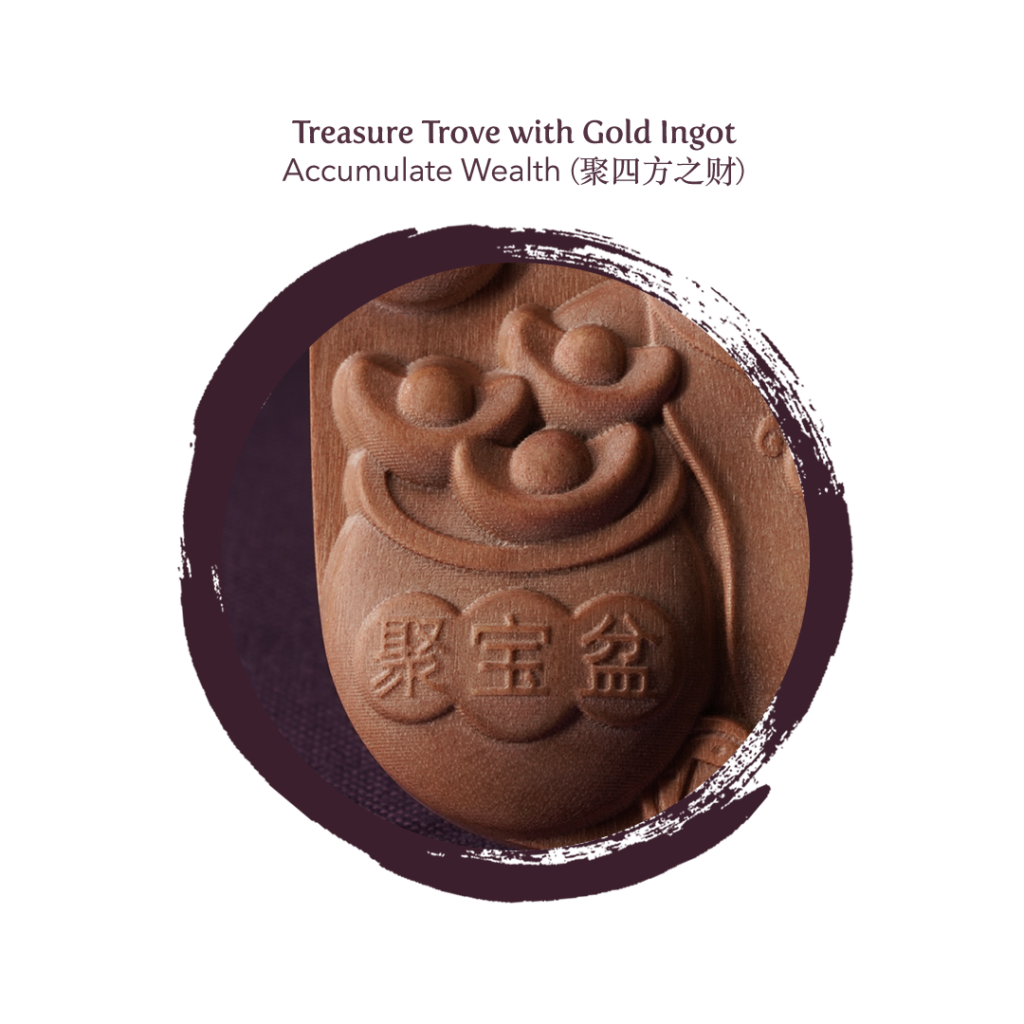 A treasure in ancient Chinese folklore, the Wealth Garnering Pot (聚宝盆) is a prominent symbol of prosperity in Chinese culture. As a potent wealth amplifier, the Treasure Trove not only retains its destined owners’ wealth, but grows and accumulates it — allowing them to maximise their greatest potential.
According to legend, the Treasure Trove was a mythical pot discovered by Shen Wan San (沈万三), one of the wealthiest and most successful businessmen in the Ming dynasty. By multiplying his wealth and success, Shen Wan San’s success solidified the legacy of the Treasure Trove as a figure of prosperity.

Overflowing with wealth, the Treasure Trove holds numerous gold ingots — synonymous with wealth and prosperity. Fostering the entrepreneurs’ intuitive sense, the gold ingots inspire them to discern and identify the right trends and act decisively on opportunities that present themselves. It attracts powerful benefactors and mentors, propelling its destined owners to reach new heights and breakthroughs.