Posted by Imperial Harvest on 01 December 2021 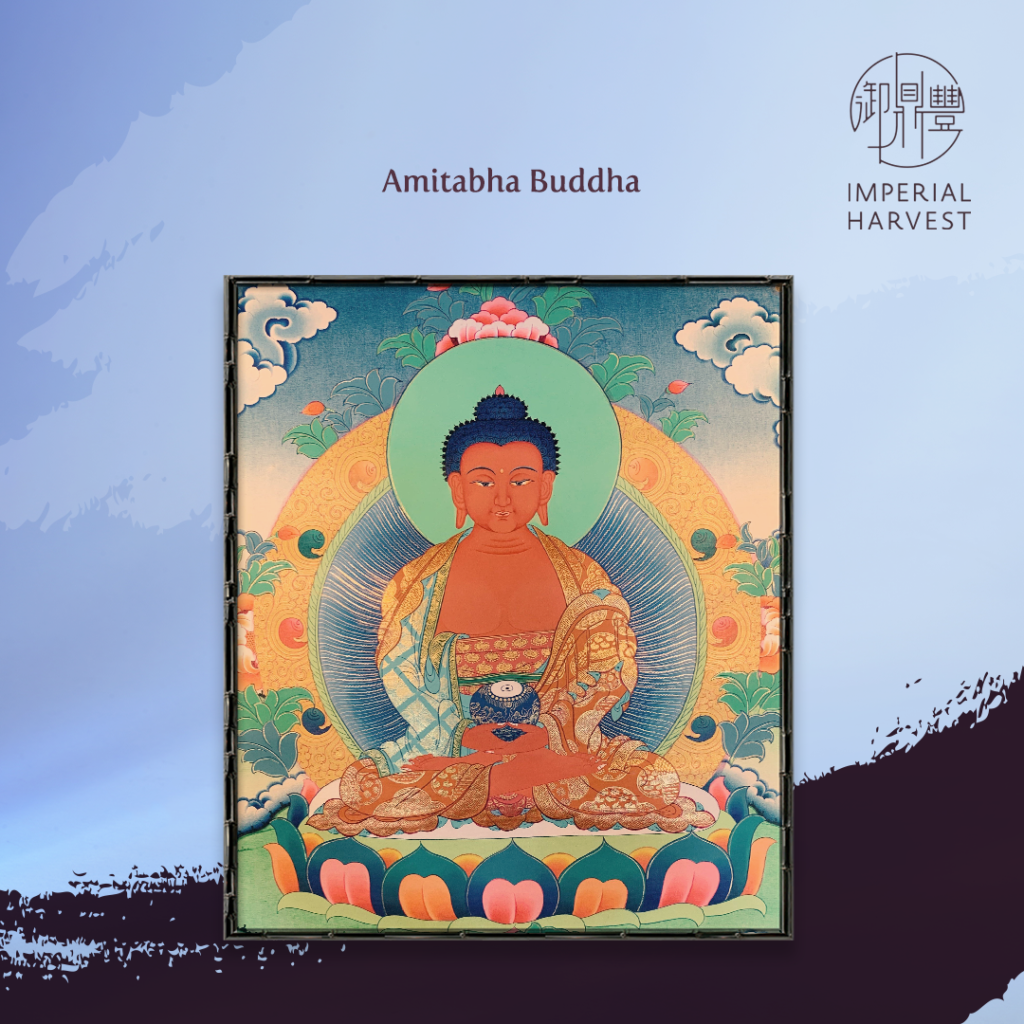 Many Buddhists have a strong affinity with Amitabha, with many schools worldwide being based upon Amitabha Buddha’s teachings and practice. Known for his most important enlightenment technique of “visualisation”, Amitabha empowers his devotees with blessings to visualise and manifest their goals and aspirations, transforming their destinies into reality.

All-knowing and boundless, Amitabha is often regarded as the most powerful Buddha representing immeasurable light and life. Symbolising compassion, wisdom and kindness, Amitabha devotes his life to the enlightenment of all sentient beings, making it his mission to illuminate their paths of growth, success and prosperity. 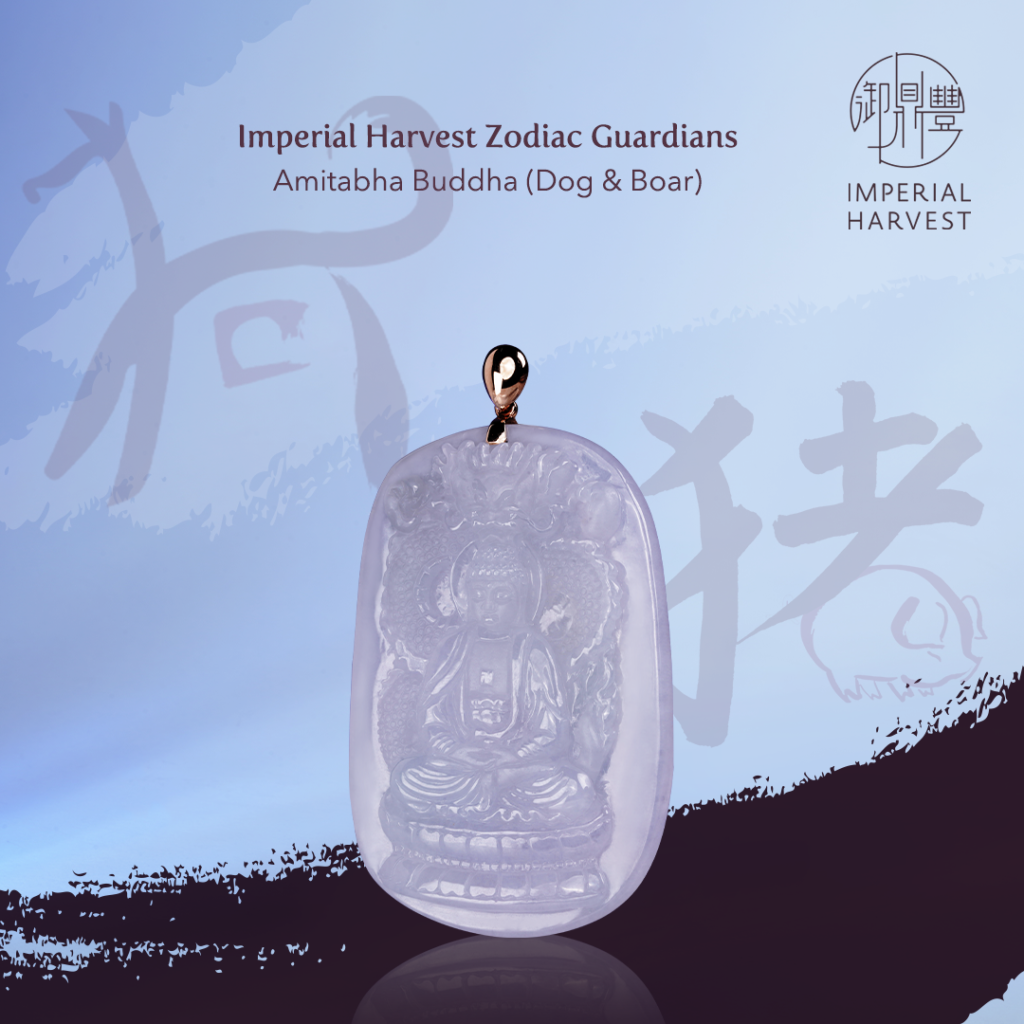 Amitabha Buddha’s immeasurable light illuminates the paths of those under his patronage, enlightening the prudent, determined and open-minded individuals born in the years of the Dog and the Boar to excel in their personal and professional ventures.

Masterfully designed with auspicious emblems representing wealth, authority, abundance and wisdom, Imperial Harvest’s Amitabha Buddha empowers those born in the years of the Dog and the Boar with the wisdom and foresight to achieve their goals and turn their dreams into reality.

Mudra of the Dharma Realm 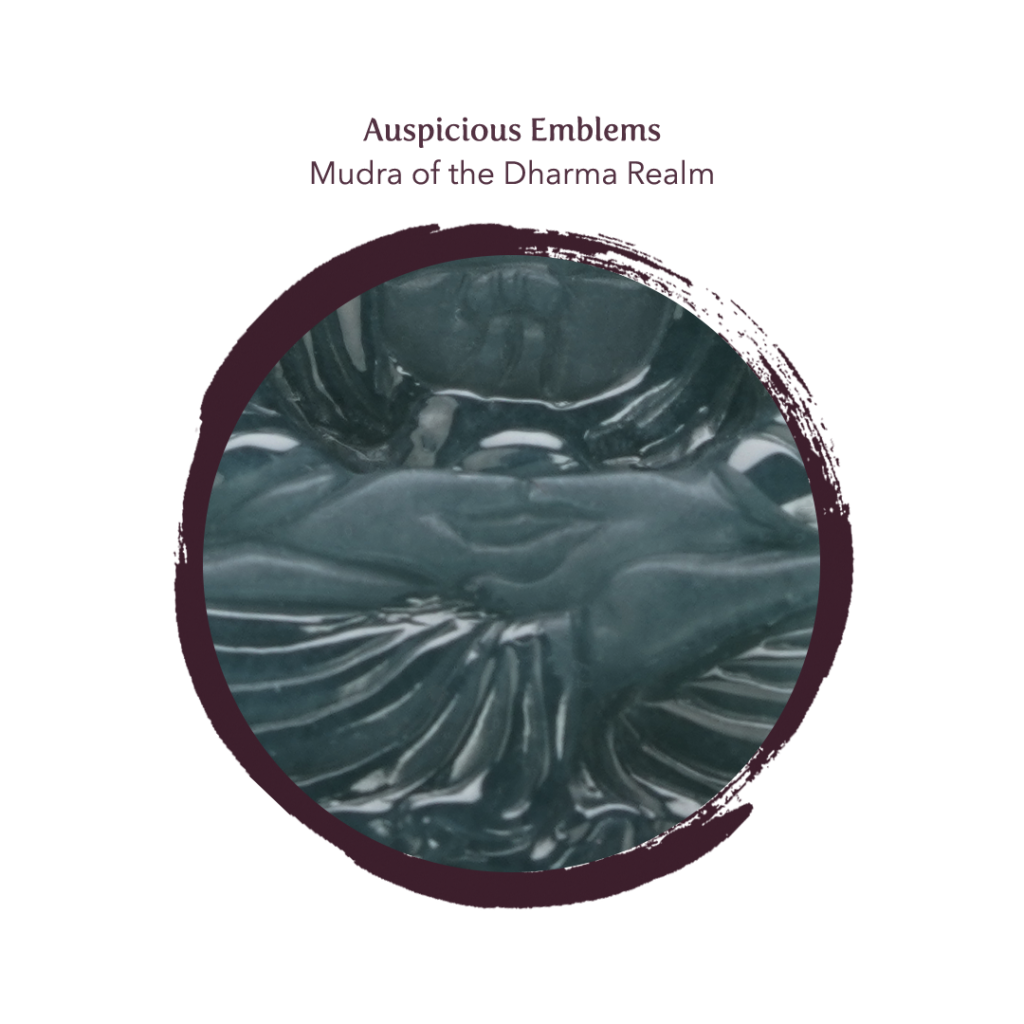 During the innovation process of this exquisite Imperial Harvest treasure, Master David fully immersed himself in his extensive research of Buddhist literature, studying various Buddhist mudras to decide on the most appropriate gesture to incorporate into his designs for the Eight Zodiac Guardians collection. In Buddhist studies, mudras refer to symbolic hand gestures or poses invoked during rites, rituals and meditations to achieve intended states of mind.

The Mudra of the Dharma Realm, otherwise known as the meditation mudra, is achieved by placing both hands on the lap, with the right hand situated on top of the left. The palms are turned upwards, and the thumbs touch to form a circle – thus symbolising the Amitabha Buddha in a state of meditation and profound wisdom.

This mudra empowers Amitabha’s destined devotees with powerful intuition and foresight, illuminating their paths towards prosperity by aiding them to secure high-paying jobs with bright career prospects, along with opportunities to scale their skills and businesses. 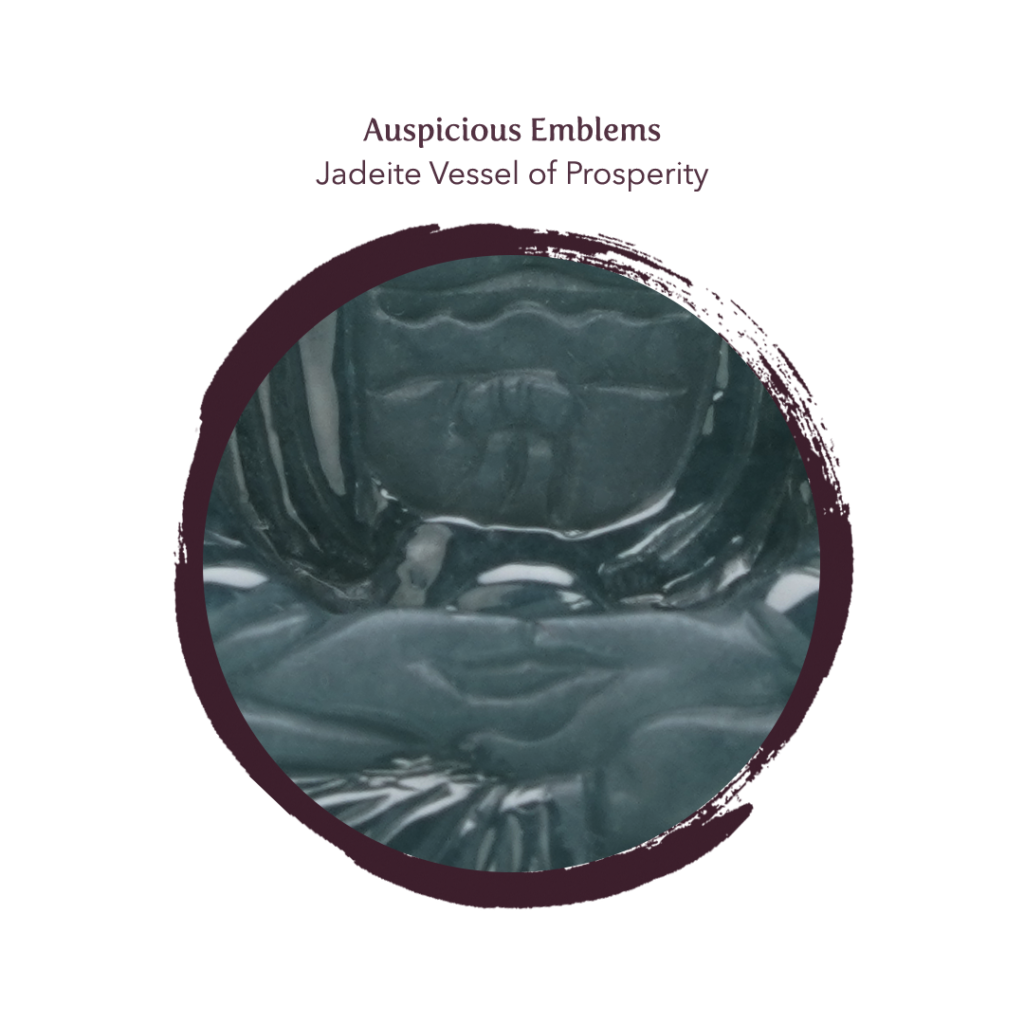 In Buddhist traditions, the Jadeite Vessel of Prosperity is an important artefact containing the divine nectar of immortality, which was used to induct those who had attained Buddhahood into the Land of Pure Bliss, thereby signifying the fulfilment of spiritual wishes.

The Jadeite Vessel of Prosperity rests in the palms of Amitabha Buddha, who uses this vessel to bless his destined devotees with auspicious luck in times of need so that they may immediately address any challenges or obstacles that hinder their paths to success. 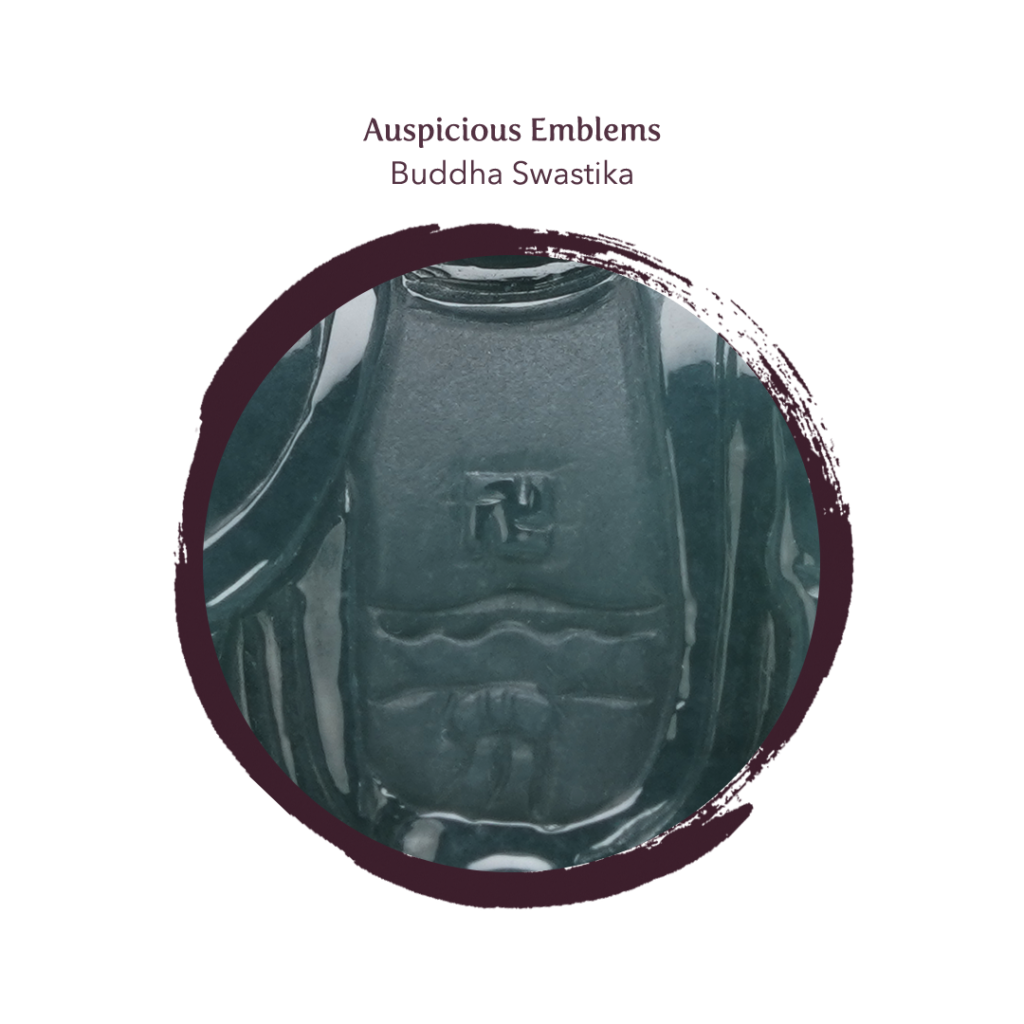 In Asia, the swastika symbol first appears in the archaeological record around 3000 B.C. Often imprinted on the chest, the feet or the palms of depictions of Buddha, the left-facing swastika is symbolic of the auspicious footprints made by Buddha, and his powers of omnipresence.

The Buddha Swastika represents Amitabha Buddha’s infinite power and wisdom, which he bestows as diving blessings onto the individuals born in the year of the Dog and the Boar. This auspicious symbol brings an abundance of wealth, success and benefactor support – preventing regression and ensuring progress in an individual’s personal and professional ventures. 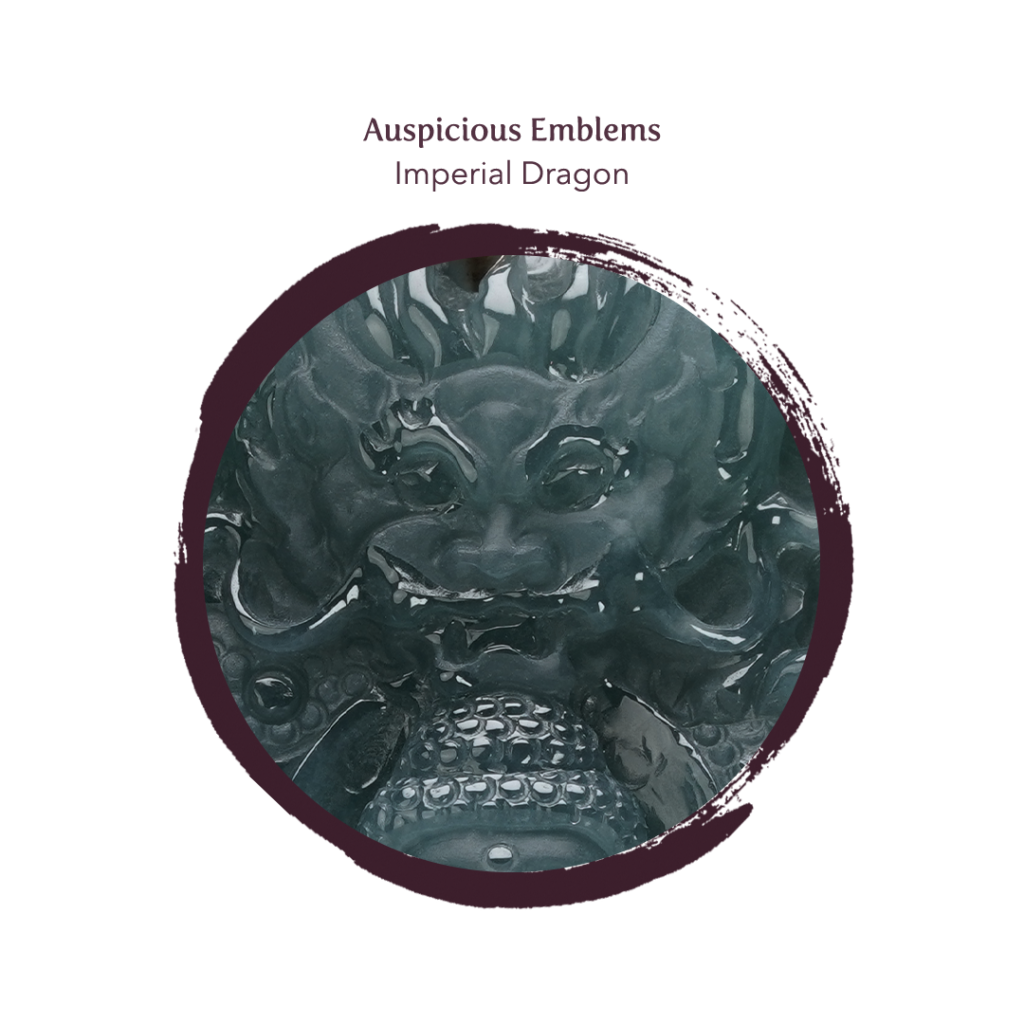 The legendary Imperial Dragon is a traditional Chinese symbol of power and prosperity. This divine mythical creature is highly revered as one of the greatest celestial forces of earth, being held as synonymous to the Chinese emperors of dynastic China. Situated overlooking the Amitabha Buddha, the Imperial dragon is symbolic of eternal and ultimate authority over all, bringing supreme luck, wealth, leadership strength, fortune and prosperity to those it presents itself to.

Holding the power to command the five elements, the Imperial Dragon ensures smooth passages on the road towards success, allowing Amitabha Buddha’s destined devotees to achieve accelerated, momentous breakthroughs in their lives and careers. The dragon empowers the individuals born in the year of the Dog and the Boar, fostering the spirit of personal development and insight, leading them to overcome their adversities in achieving impressive breakthroughs.

In paying homage to one of the most recognisable and influential figures in Buddhism, Imperial Harvest’s Amitabha Buddha is expertly hand-finished by a team of master artisans, each boasting a wealth of knowledge, multi-generational techniques and experience in their craft.

The signature lustre and intricacy that details each Imperial Harvest Eight Zodiac Guardians treasure has been derived from the artful application of intricate jadeite cutting, carving and polishing techniques. Following a series of precise design specifications and maintaining the highest quality control standards established by Master David, each treasure in the Eight Zodiac Guardians collection achieves the highest echelons of craftsmanship.

Imperial Harvest’s Fine Jadeite Amitabha Buddha empowers those born in the years of the Dog and the Boar with the wisdom and intuition to identify favourable opportunities as they scale upwards on the ladder of success to unprecedented heights. 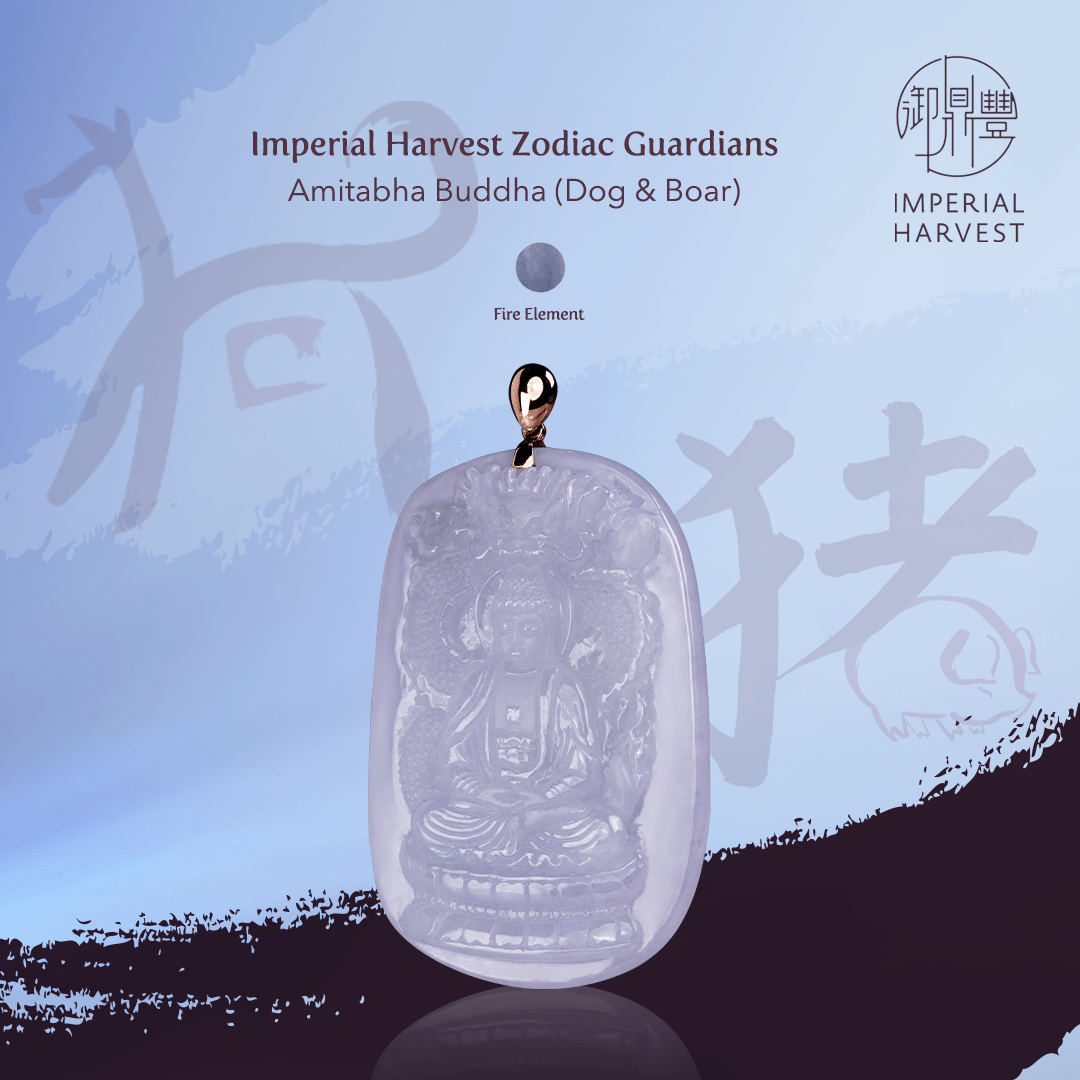 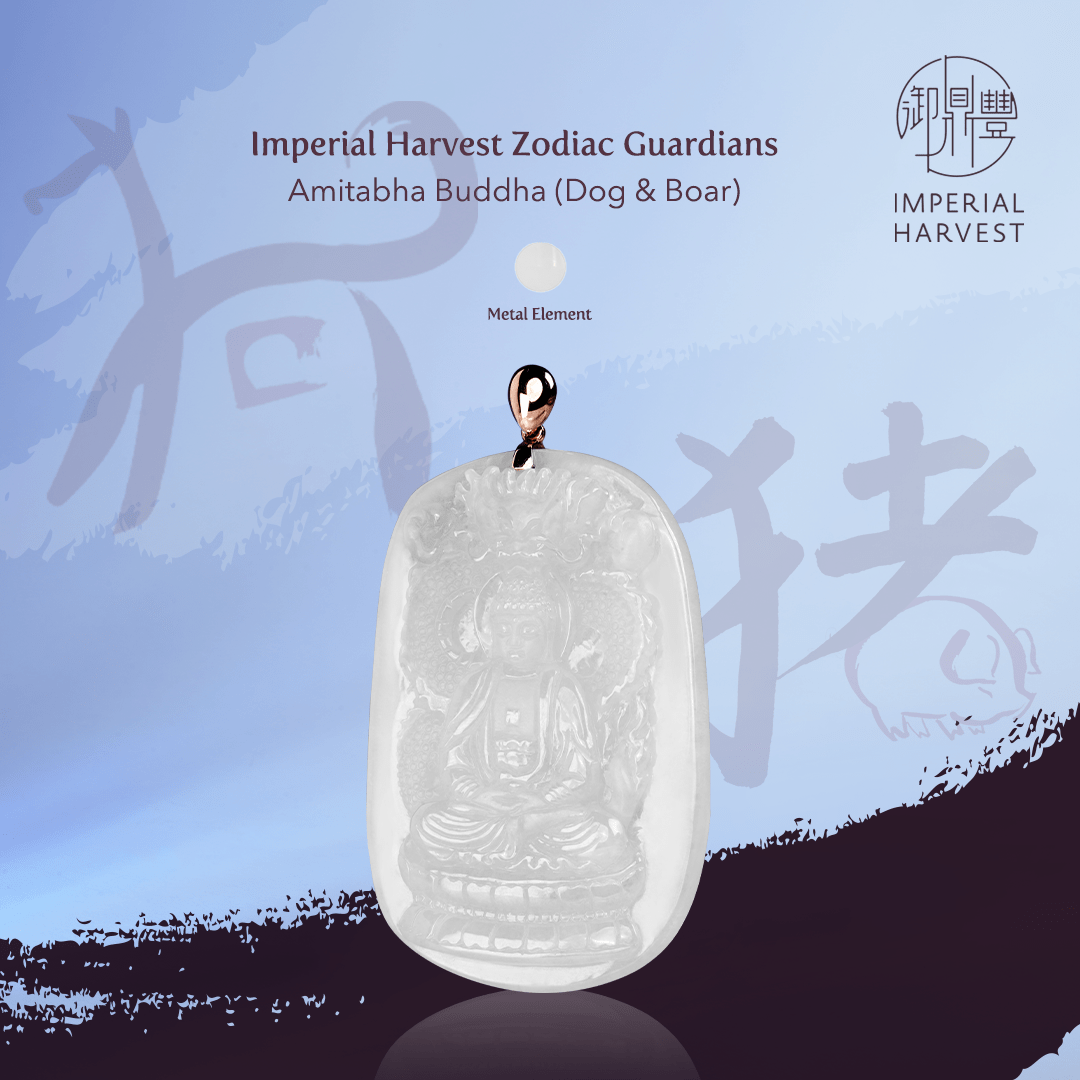 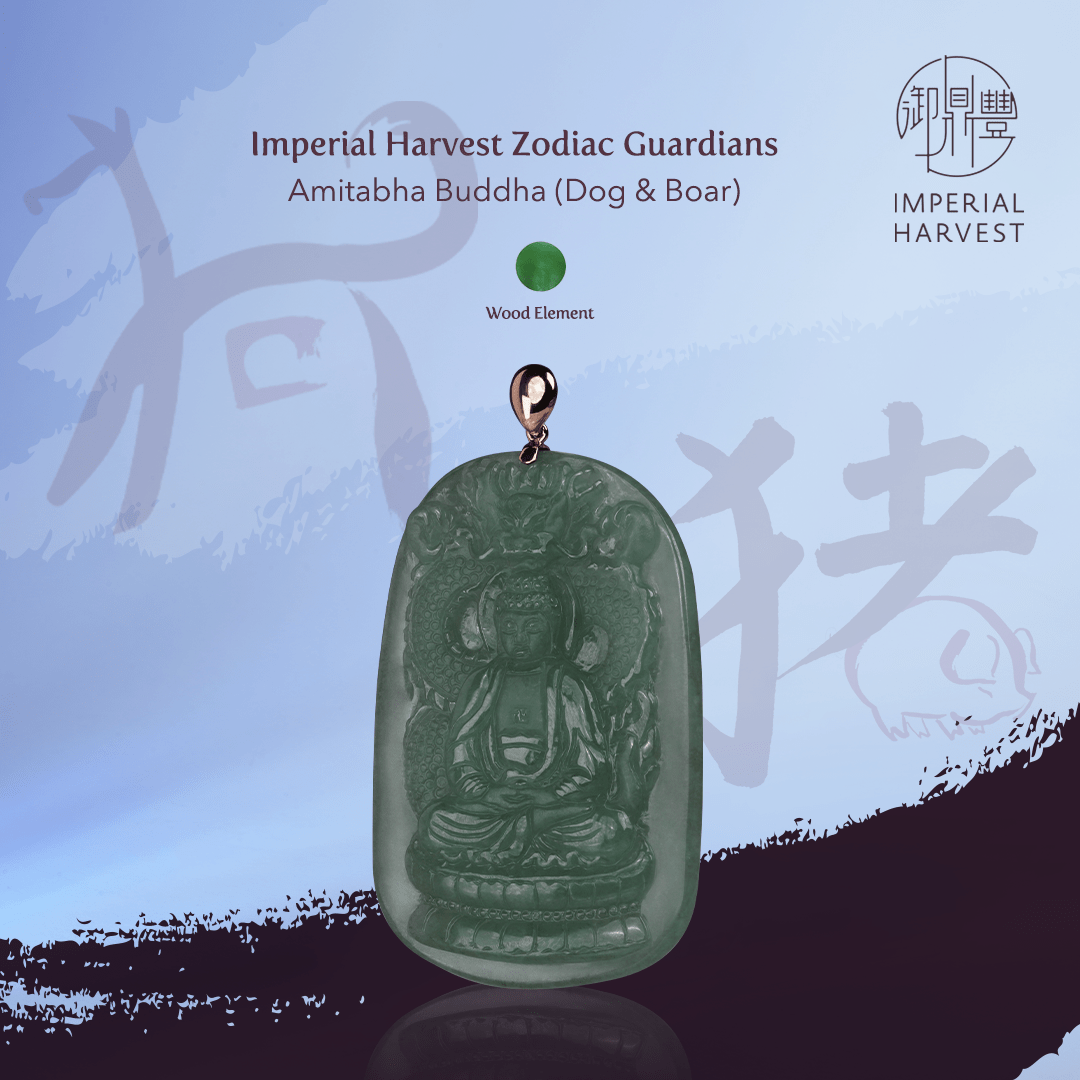 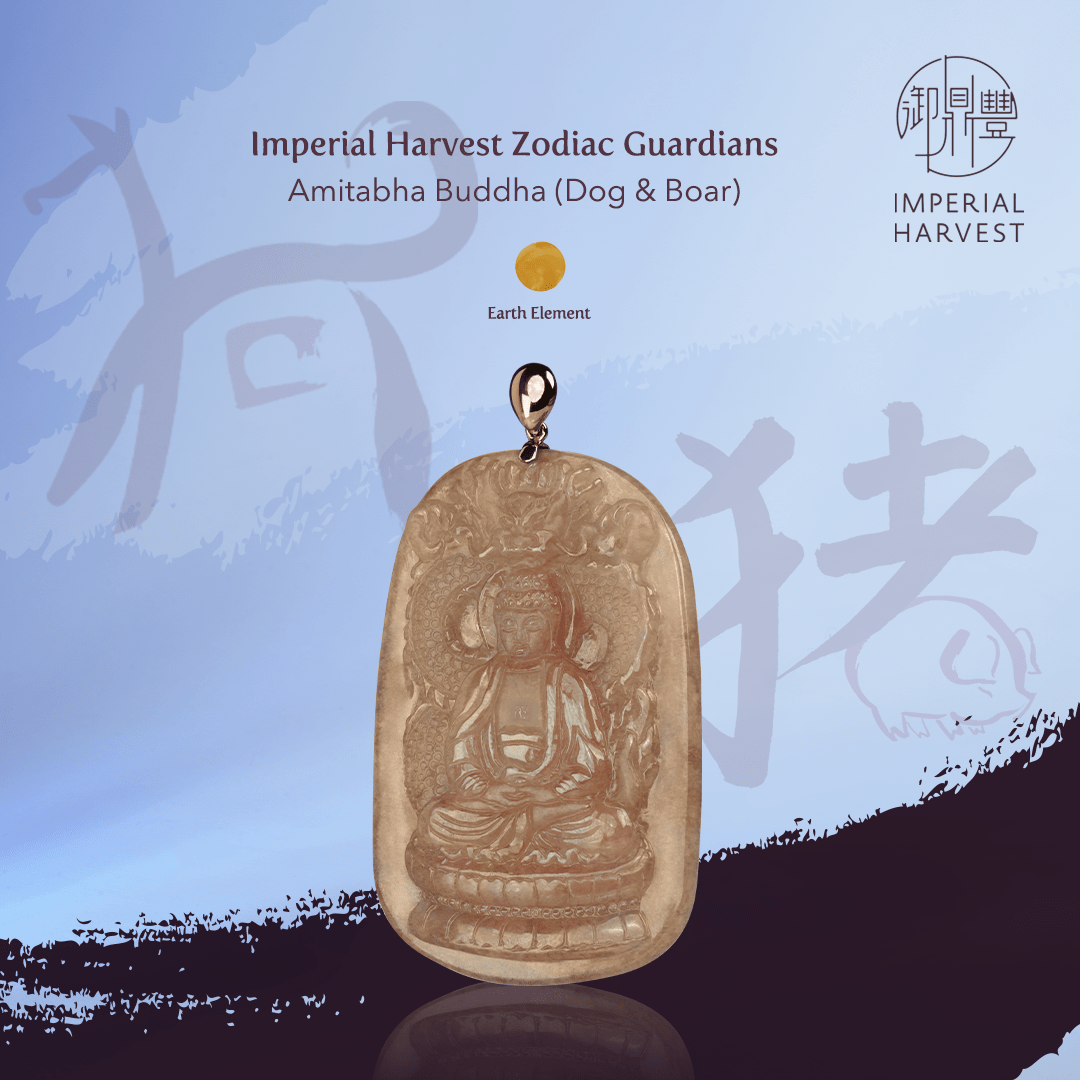 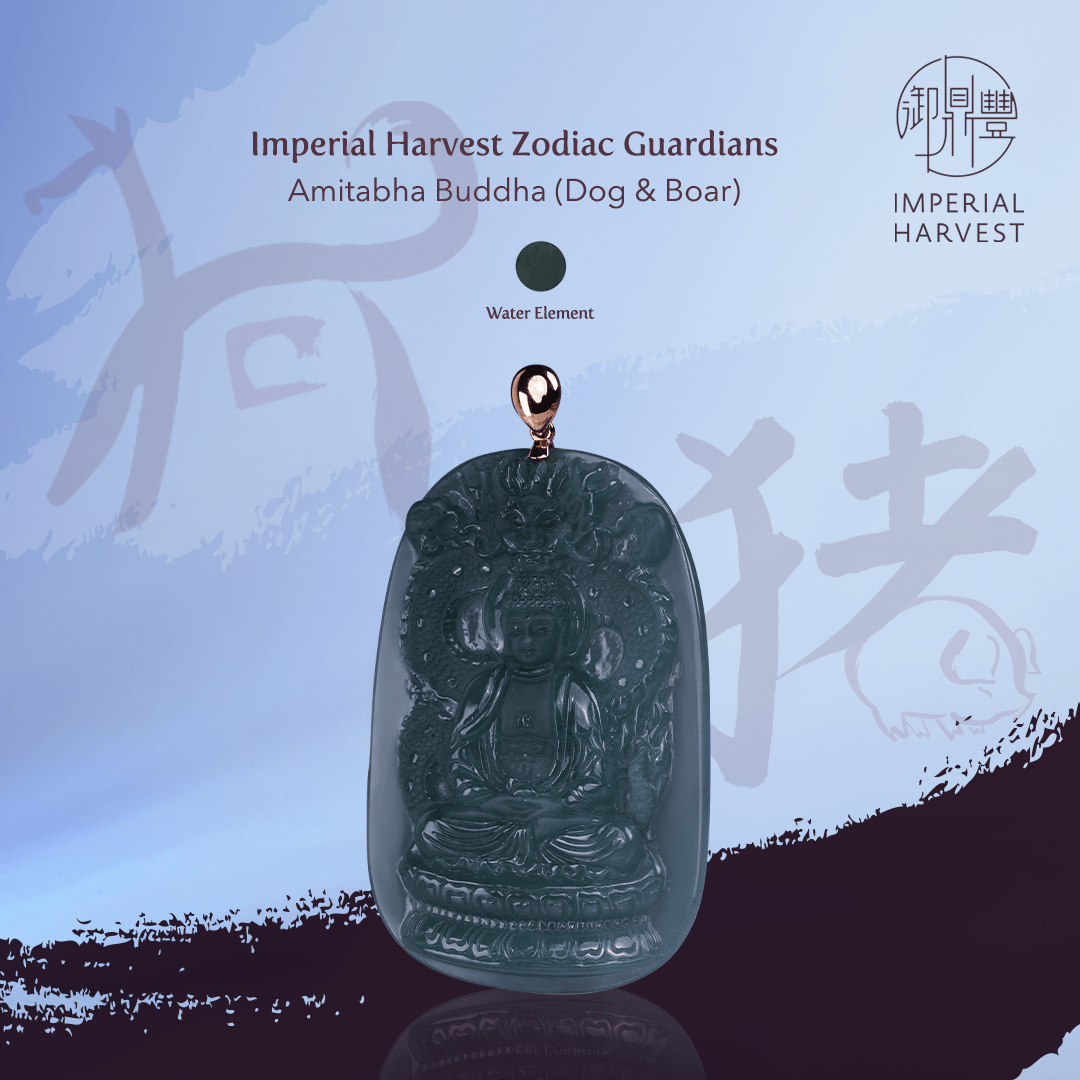