Posted by Imperial Harvest on 21 October 2021

Three Collections of the Goddess of Mercy

The Goddess of Mercy, otherwise known as Guan Yin, is widely beloved in various Buddhist traditions. Often seen as a figure of eternal benevolence, she is celebrated as the spiritual embodiment of wisdom, compassion and mercy. 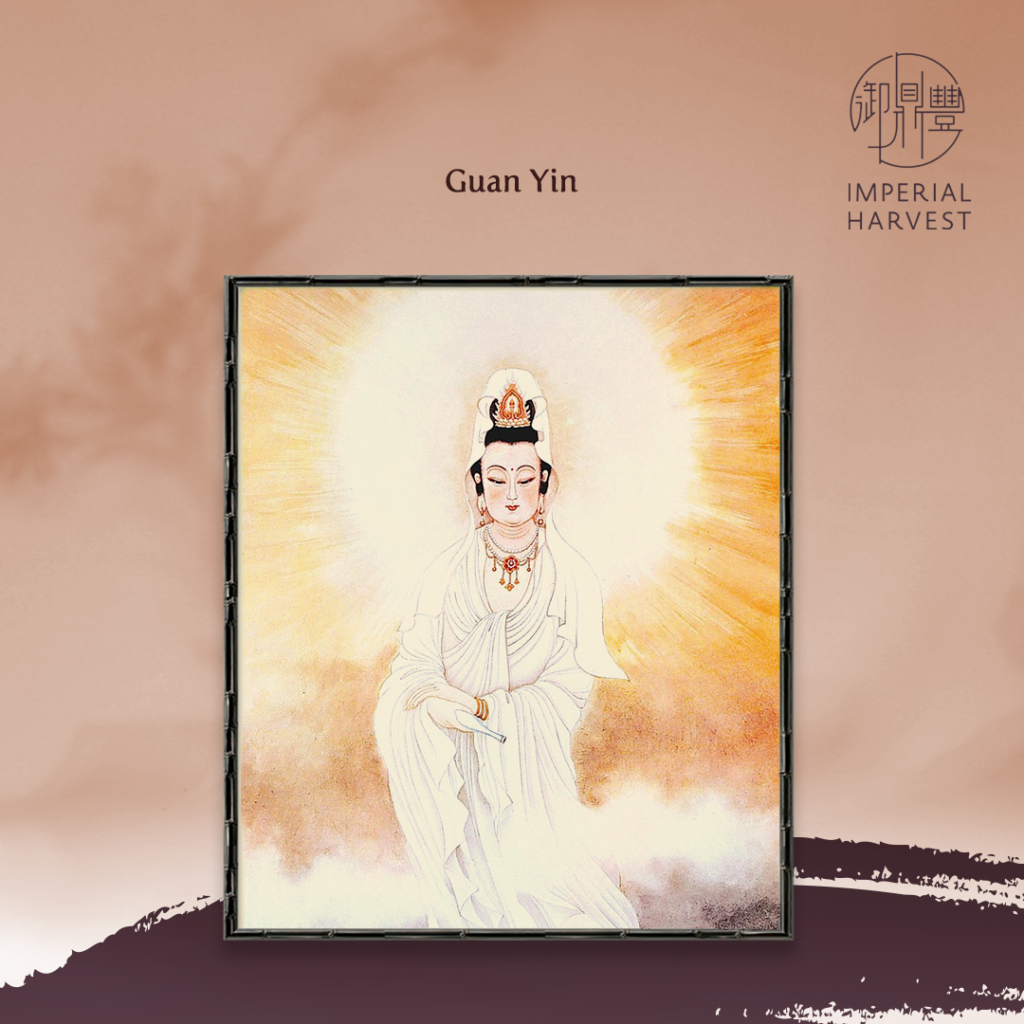 Each year, Buddhist communities around the world gather to celebrate three important milestones in Guan Yin’s path to attaining enlightenment along with her deification as the Goddess of Mercy.

These key milestones are recognised as the three birthdays of Guan Yin:

With the arrival of Guan Yin’s third birthday this lunar month, Imperial Harvest commemorates her enduring spirit and devotion to the betterment of humanity. In particular, these three key collections embody the values endorsed by Guan Yin and manifest in her multifold blessings.

These collections are especially inspired by Guan Yin’s dedication to achieving greatness and her unyielding passion for helping humanity realize its limitless potential. Bestowing upon destined owners bountiful luck and groundbreaking growth, these exquisite treasures empower them with breakthroughs and successes in their personal and professional ventures.

Guan Yin assumes thirty-three different manifestations, some of which are designated guardians of the twelve zodiac signs. In paying homage to Guan Yin, Master David conceptualised and designed eight different zodiac guardians to cater to our clients’ range of zodiac signs. 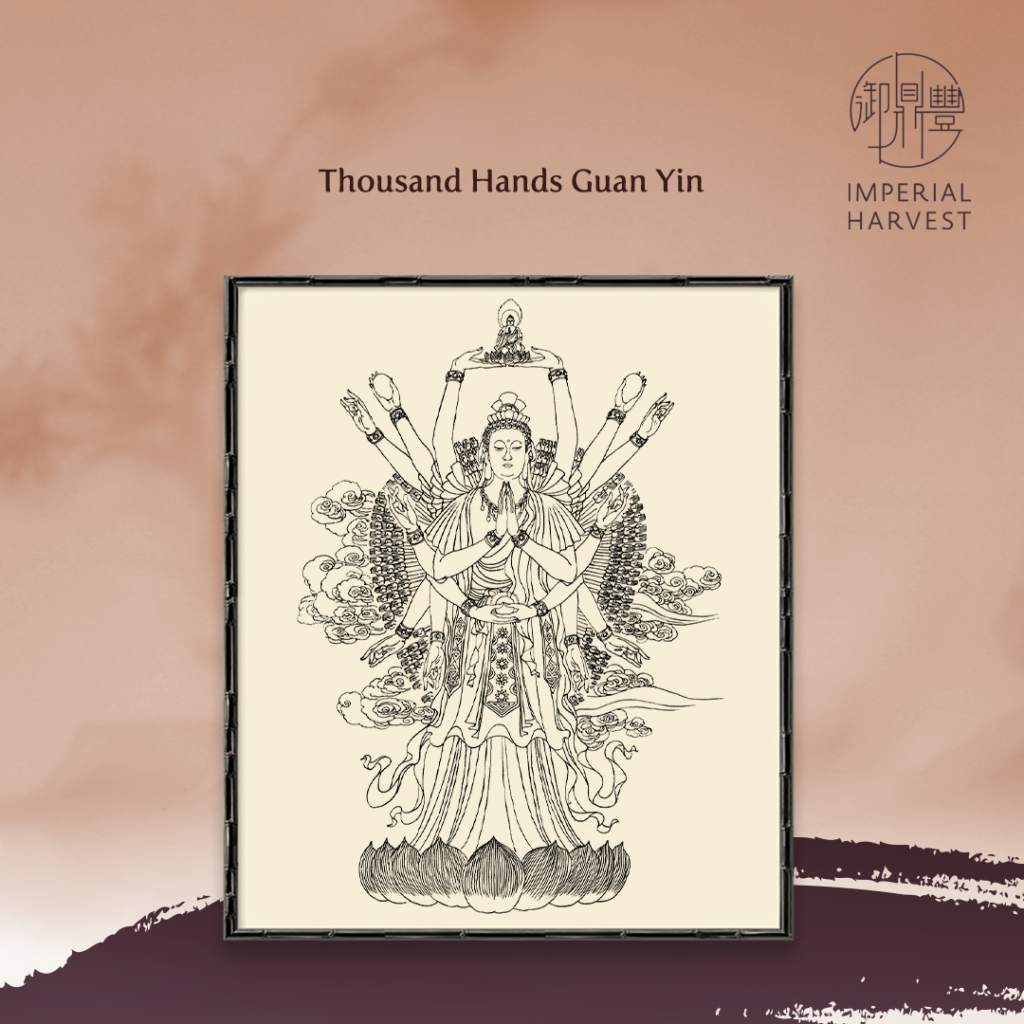 The Thousand Hands Guan Yin is the guardian for those born in the year of the rat (1960, 1972, 1984, 1996) and is widely perceived to be the most influential and recognisable of Guan Yin’s manifestations.

One account of this formidable manifestation originates from a 16th century Ming dynasty novel, Complete Tale of Guanyin and the Southern Seas (南海觀音全撰) highlights Guan Yin’s vow to never rest until she had freed all beings from the cycle of rebirth. To aid Guan Yin on her noble mission to help humanity, Amitabha Buddha granted her eleven heads and a thousand arms, giving her the abilities required to bless those in need. Today, Guan Yin’s wisdom and intelligence empower countless devotees in overcoming their adversities and achieving their unlimited human potential. 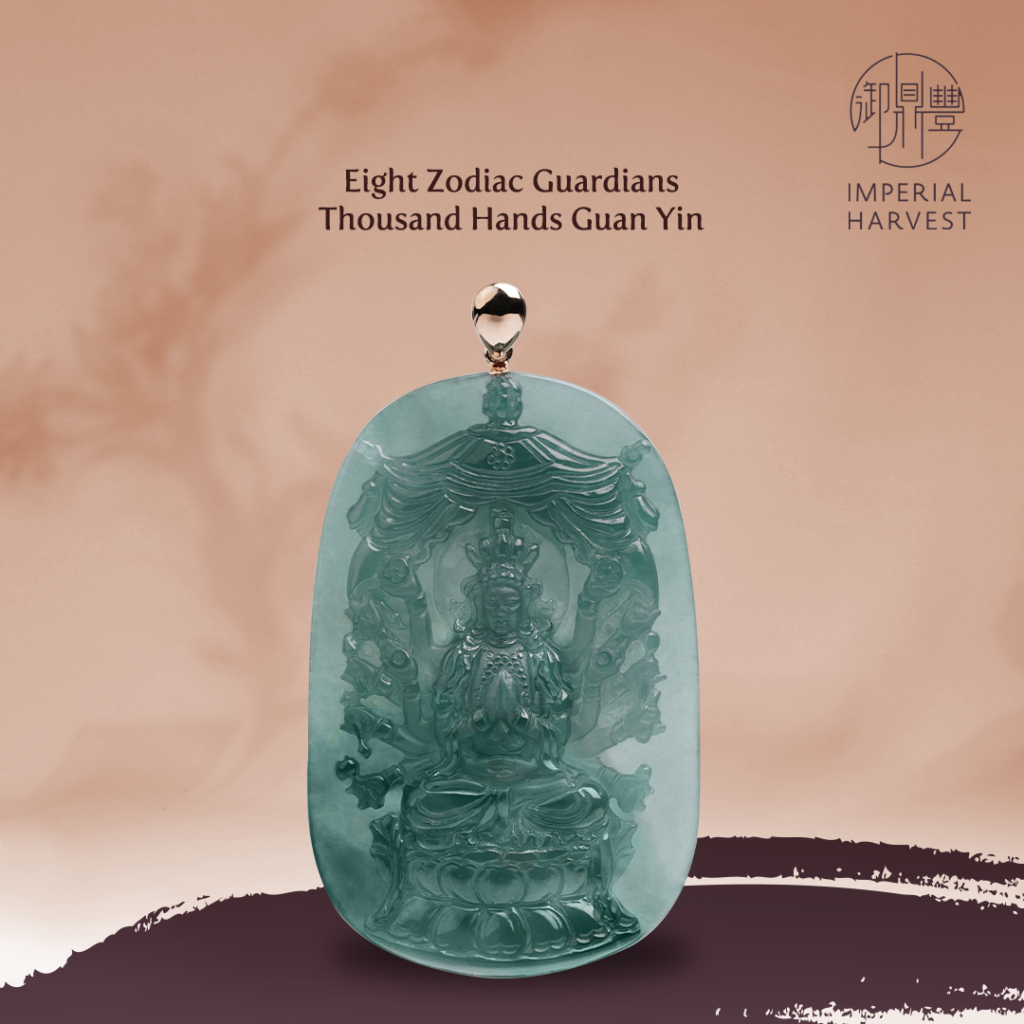 Featuring eleven heads, Guan Yin is depicted in a meditative seated position atop a blossoming lotus flower, which is symbolic of her wisdom and enlightenment. She wields twelve intricately carved symbols of prosperity, representing the myriad of prosperous blessings bestowed upon the destined owner. 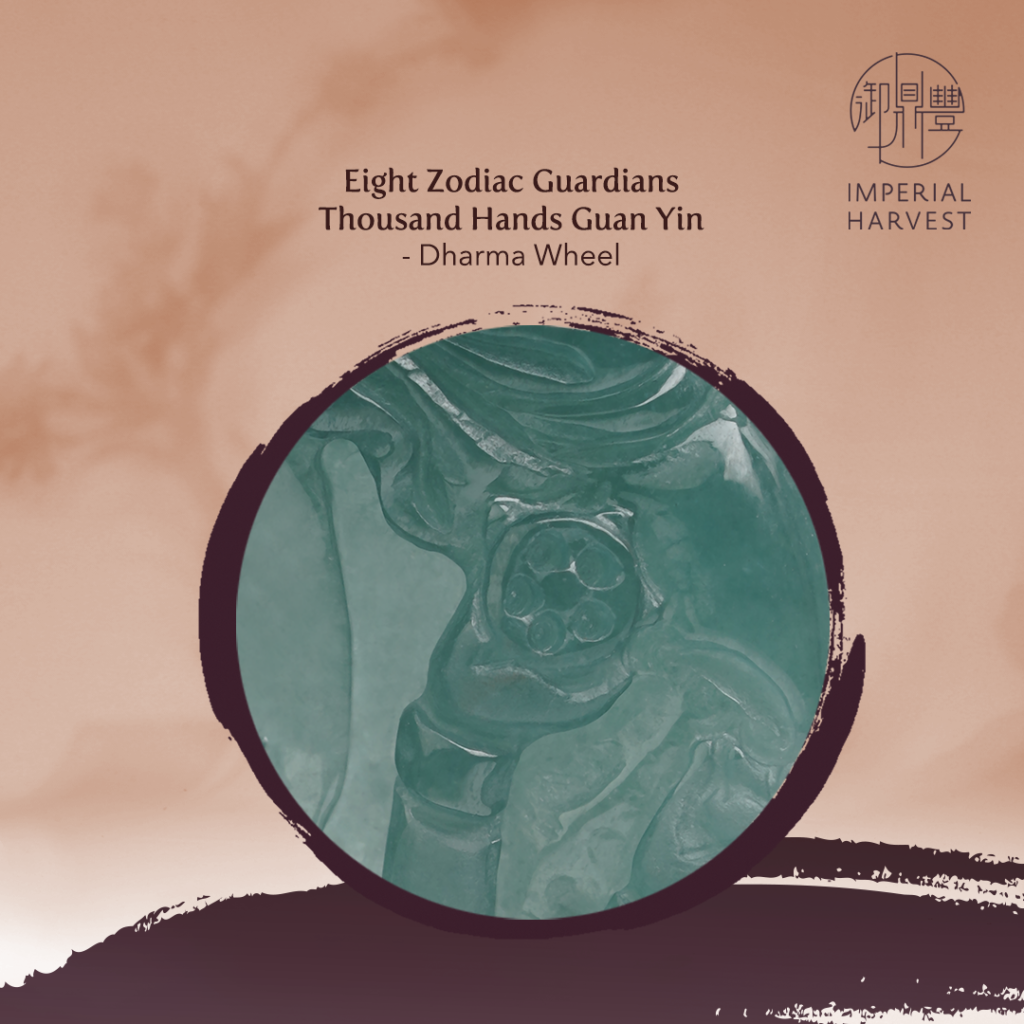 Imperial Harvest’s Fine Jadeite Thousand Hands Guan Yin is hand-finished by master craftsmen, each boasting a wealth of multi-generational techniques and lineage in this venerable art. The signature lustrous appearance and intricate detailing within each piece are derived from the meticulous application of jadeite cutting, carving and polishing techniques. 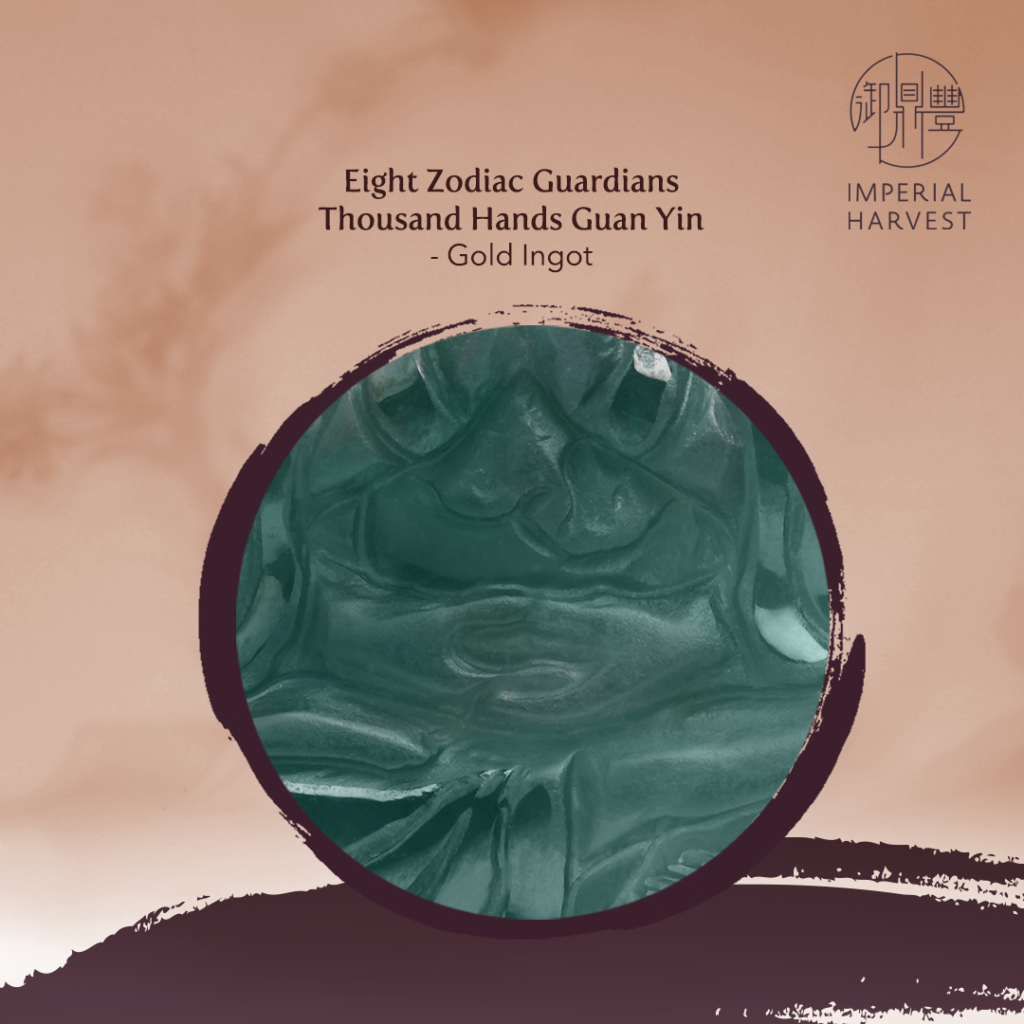 The intricate design is carved according to precise specifications and held to strict quality control standards established by Master David. The use of traditional hand-carving techniques instead of automated machinery gives rise to unrivalled precision and detailing, allowing Imperial Harvest treasures to occupy the highest echelons of craftsmanship.

The Thousand Hands Guan Yin empowers those born in the year of the rat with accelerated breakthroughs and advancements in their endeavours. Armed with Guan Yin’s abundant blessings, destined owners find themselves overcoming challenges in their careers, businesses, investment ventures and relationships.

Across history, numerous accounts of Guan Yin have featured her with a necklace or rosary of agarwood beads draped around her neck. She is said to have used these beads during her meditations while praying for her devotees, or even in invoking divine powers to aid her noble efforts towards the betterment of mankind. 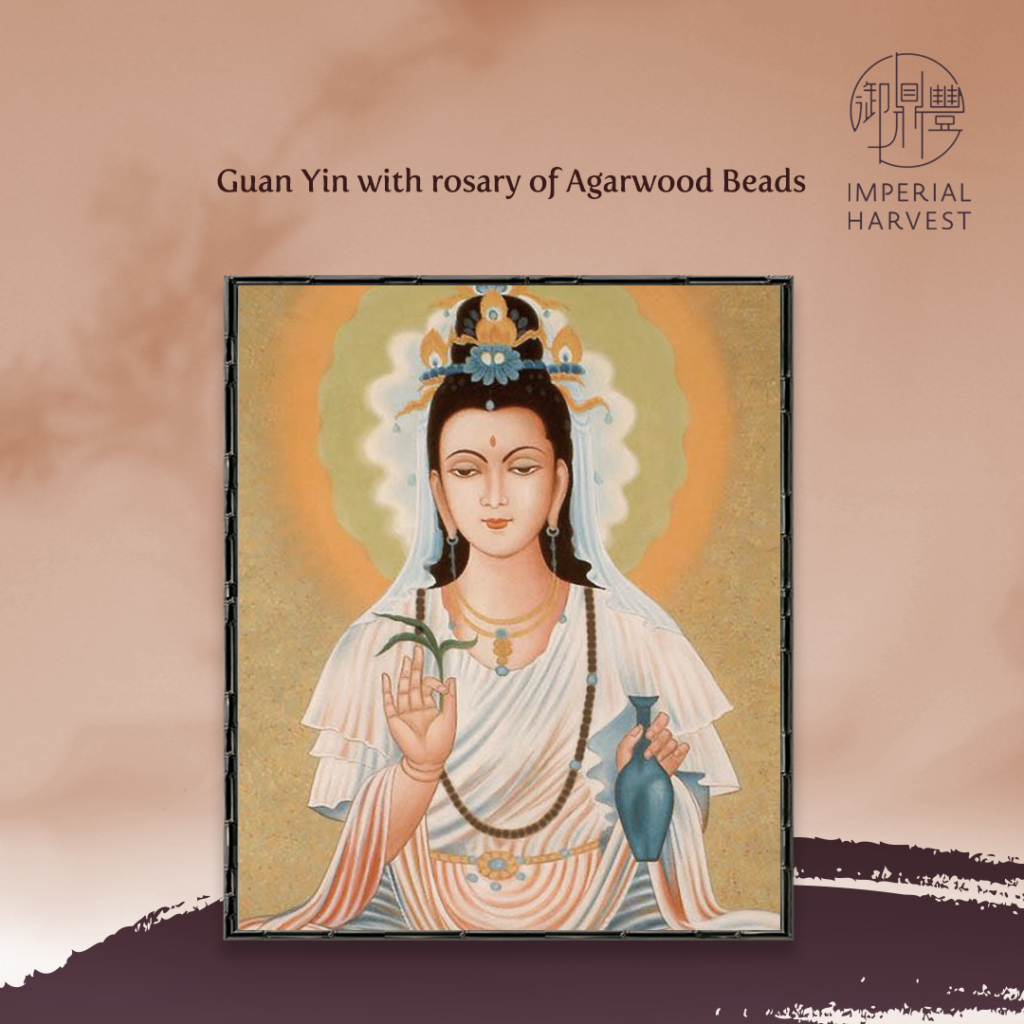 Agarwood is a fragrant, dark resinous wood formed from Aquilaria trees. Due to the rarity of natural Agarwood trees, Imperial Harvest-grade Agarwood has become one most sought-after commodities in the world, with a value that surpasses that of gold. 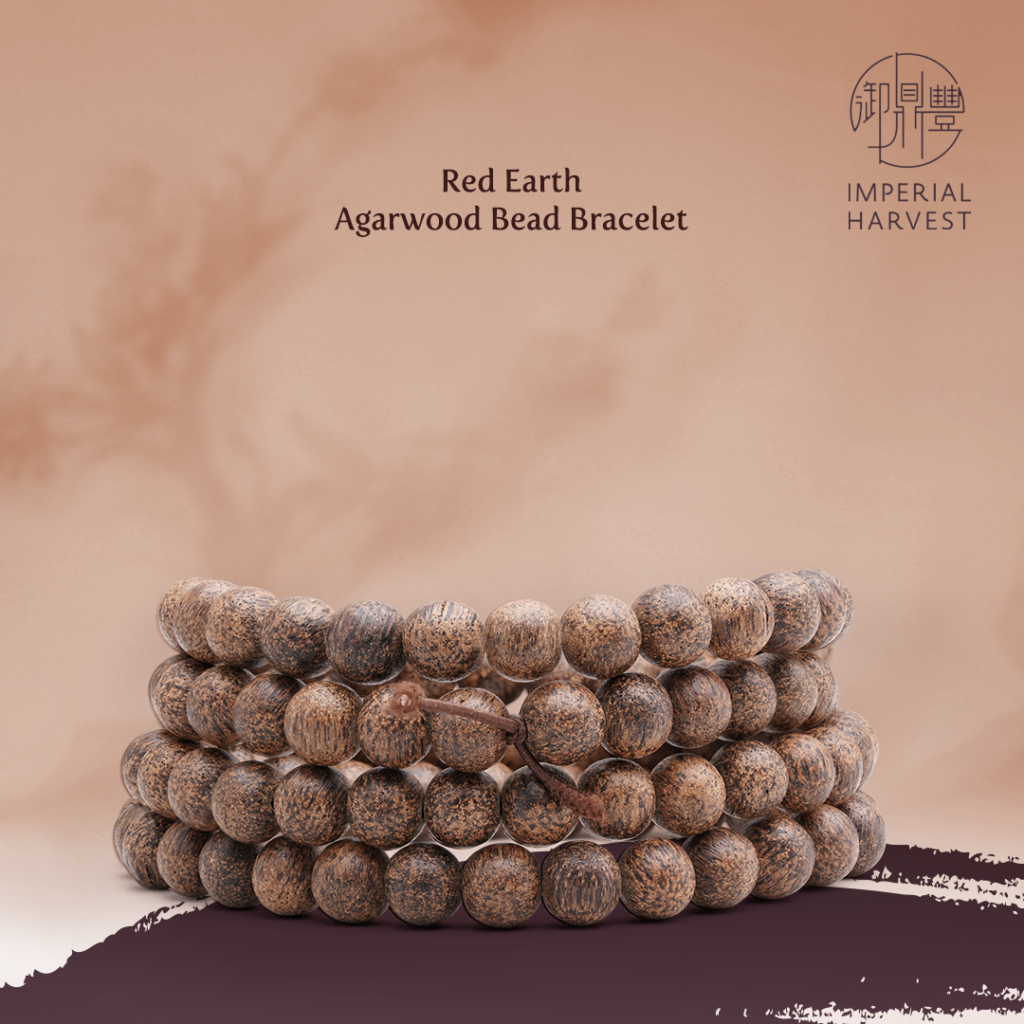 Imperial Harvest sources all-natural Agarwood from forests deep in the mountains of South Asia, with the wood being free of man-made chemicals, fragrances or fertilisers. Agarwood is prized not only for its elegant fragrance and appearance, but also for its Imperial Feng Shui qualities. Meticulously hand-crafted and polished by Imperial Harvest’s master craftsmen, the Agarwood Collection empowers the destined owner with a life of spiritual and financial abundance. 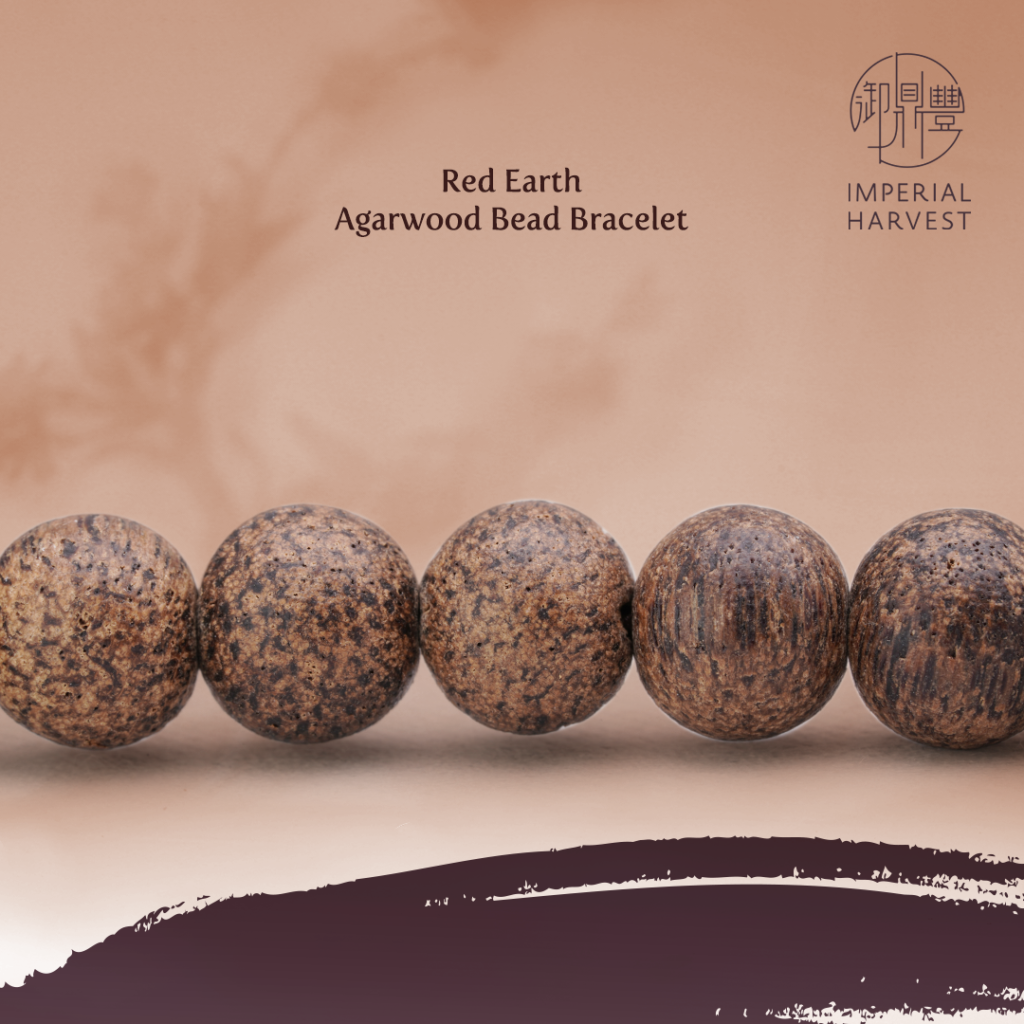 Representing the values upheld by Guan Yin, the Imperial Harvest Agarwood Collection symbolises our clients’ capacities to forge their desired destinies and fulfil their fullest potential. With Guan Yin’s wisdom, the Agarwood Collection guides our blessed clients’ to develop new perspectives and ventures, empowering them to achieve astounding breakthroughs in their endeavours.

The Guan Yin Crystal Collection is impeccably designed by Master David and carved based on Imperial Harvest’s fundamental belief in humanity’s boundless aptitudes, and in the merits of perseverance. 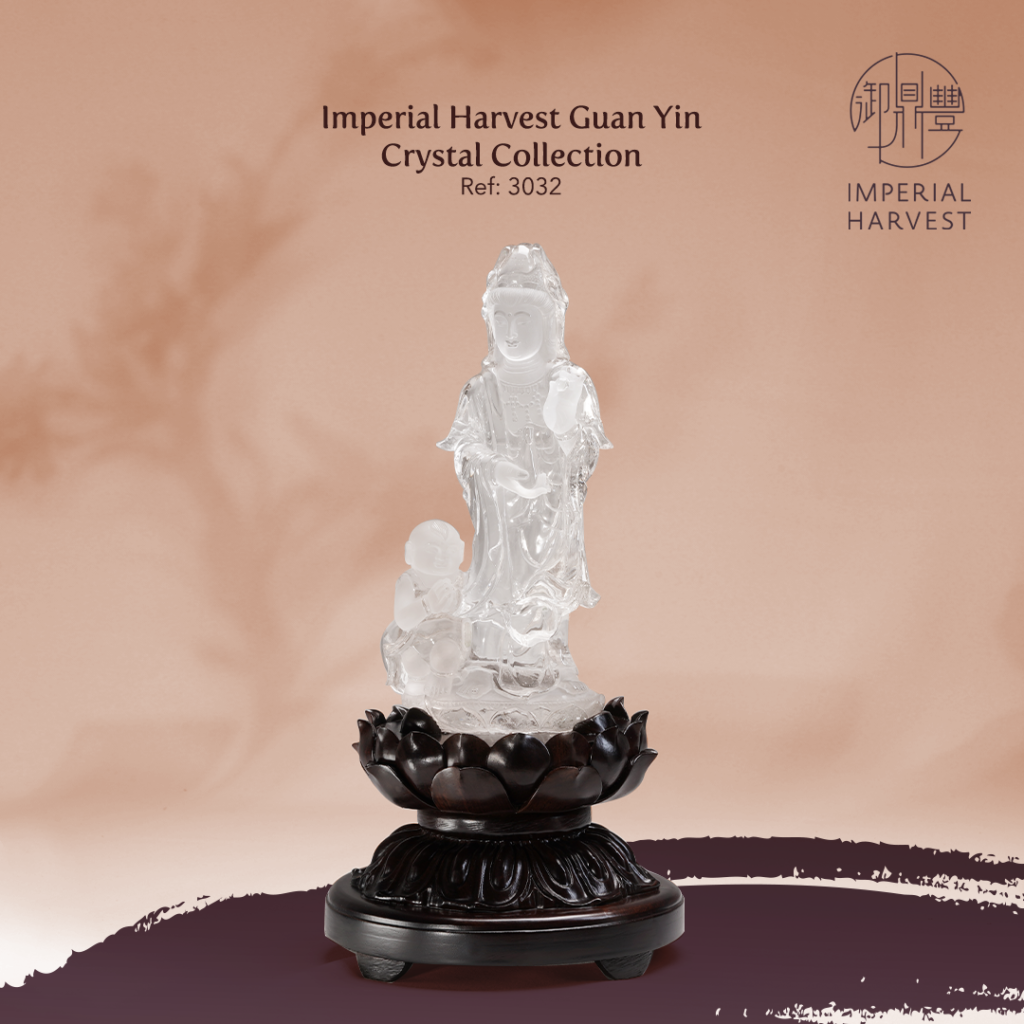 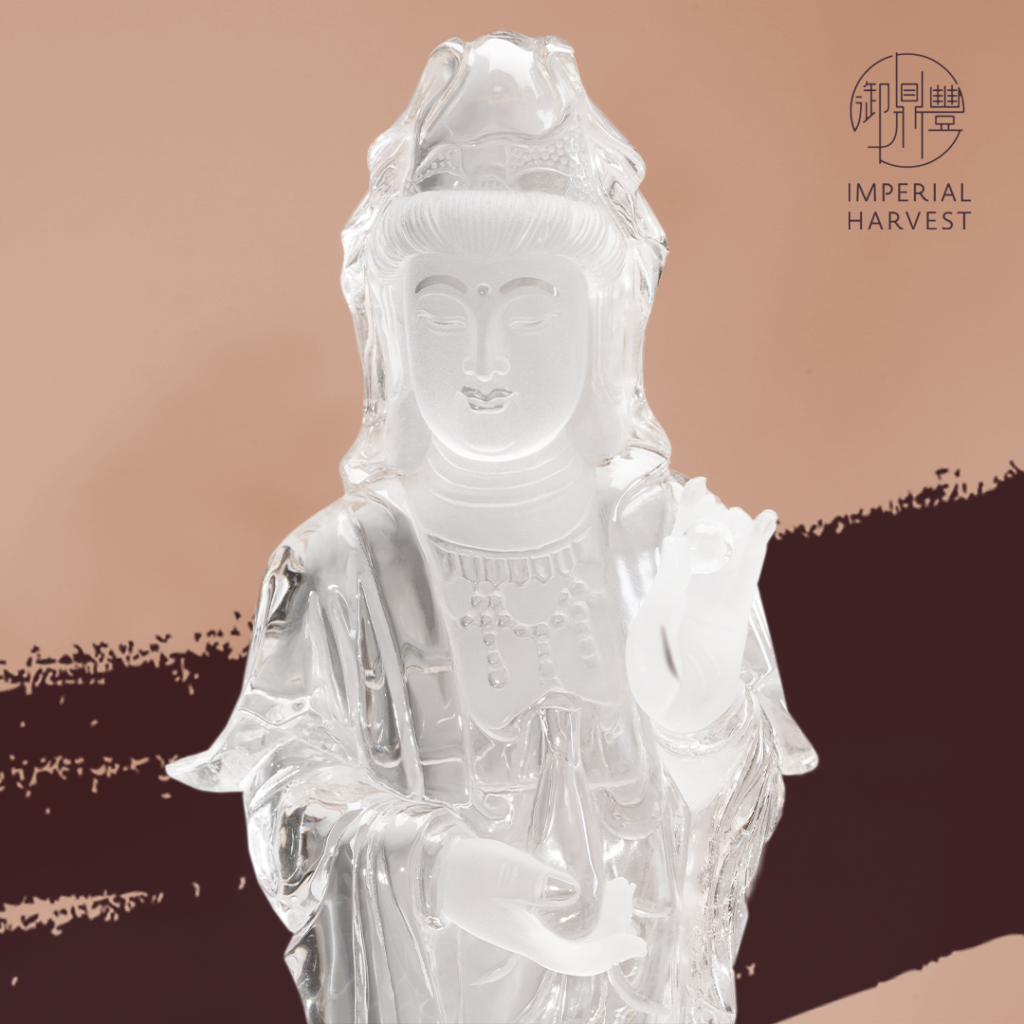 The use of all-natural crystals activates the auspicious water star, which is present in our living and working environments. It plays an important role within the art of Imperial Feng Shui, governing intuition, wealth and opportunities. When installed in its destined owners’ properties, the water star catalyses the flow of prosperous energies, showering them with wealth, benefactor support and a myriad of boundless opportunities. 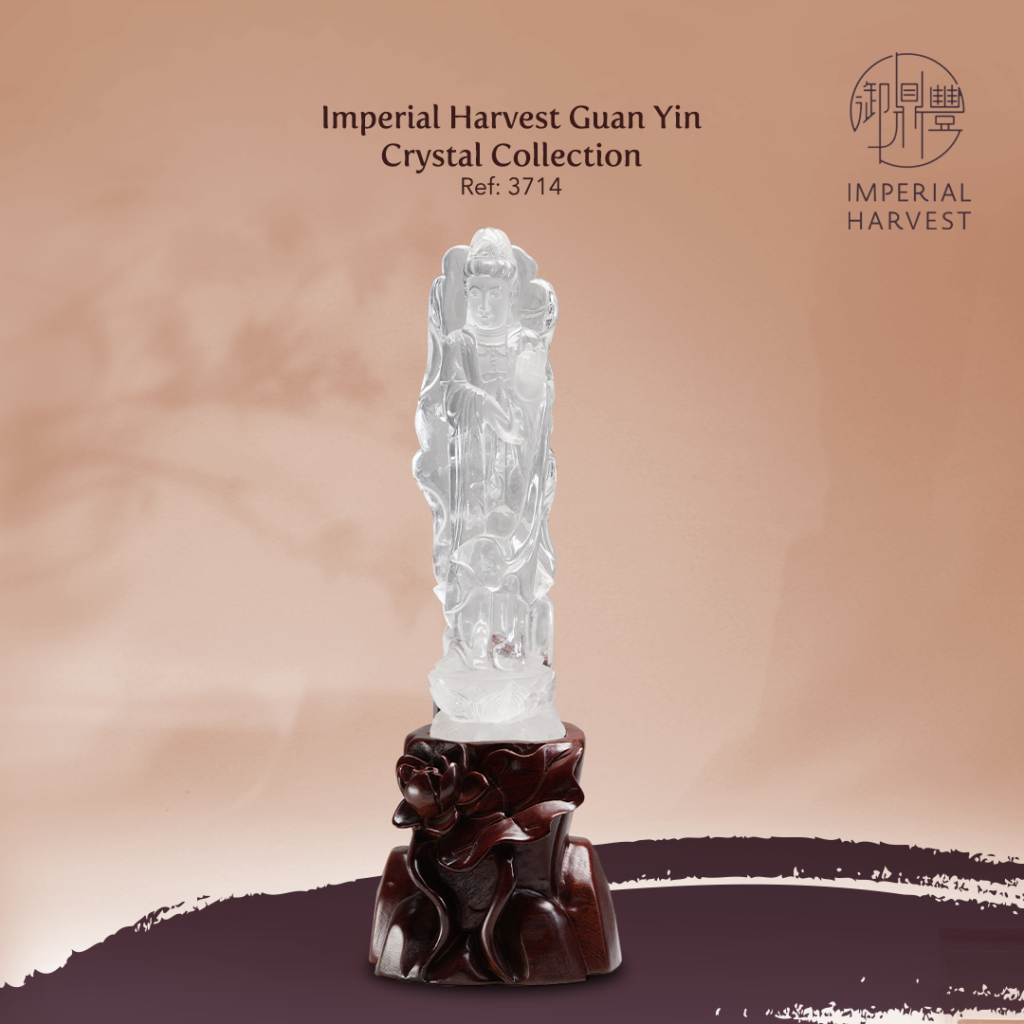 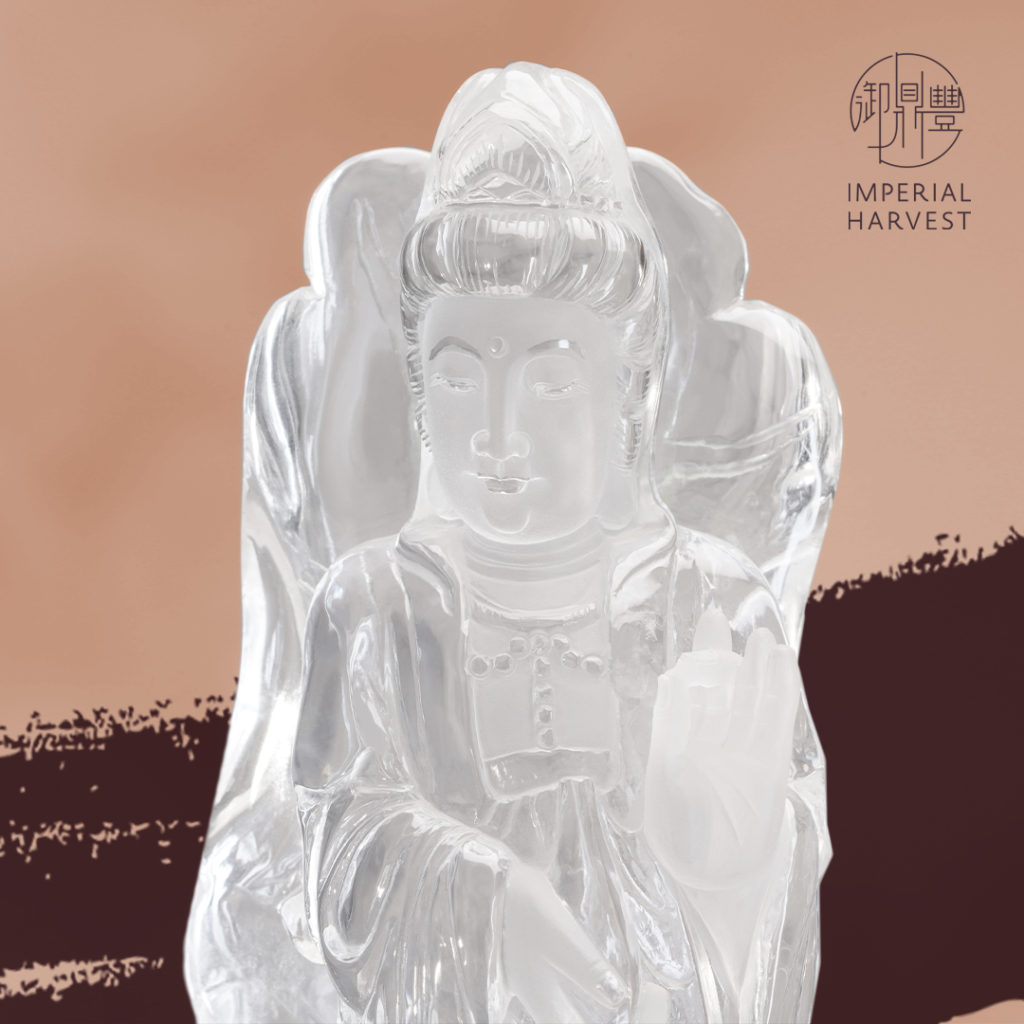 Each Imperial Harvest-grade crystal is emblematic of Guan Yin’s virtuous and unclouded qualities, with her likeness immortalised in immaculate, clear quartz crystal. The collection is characterised by its tasteful artistry and impeccable craftsmanship — hallmarks of the Imperial Harvest brand. In guiding destined owners to leverage the support of influential benefactors, the collection empowers them to carve out new opportunities in the pursuit of financial abundance, prosperity and stability. 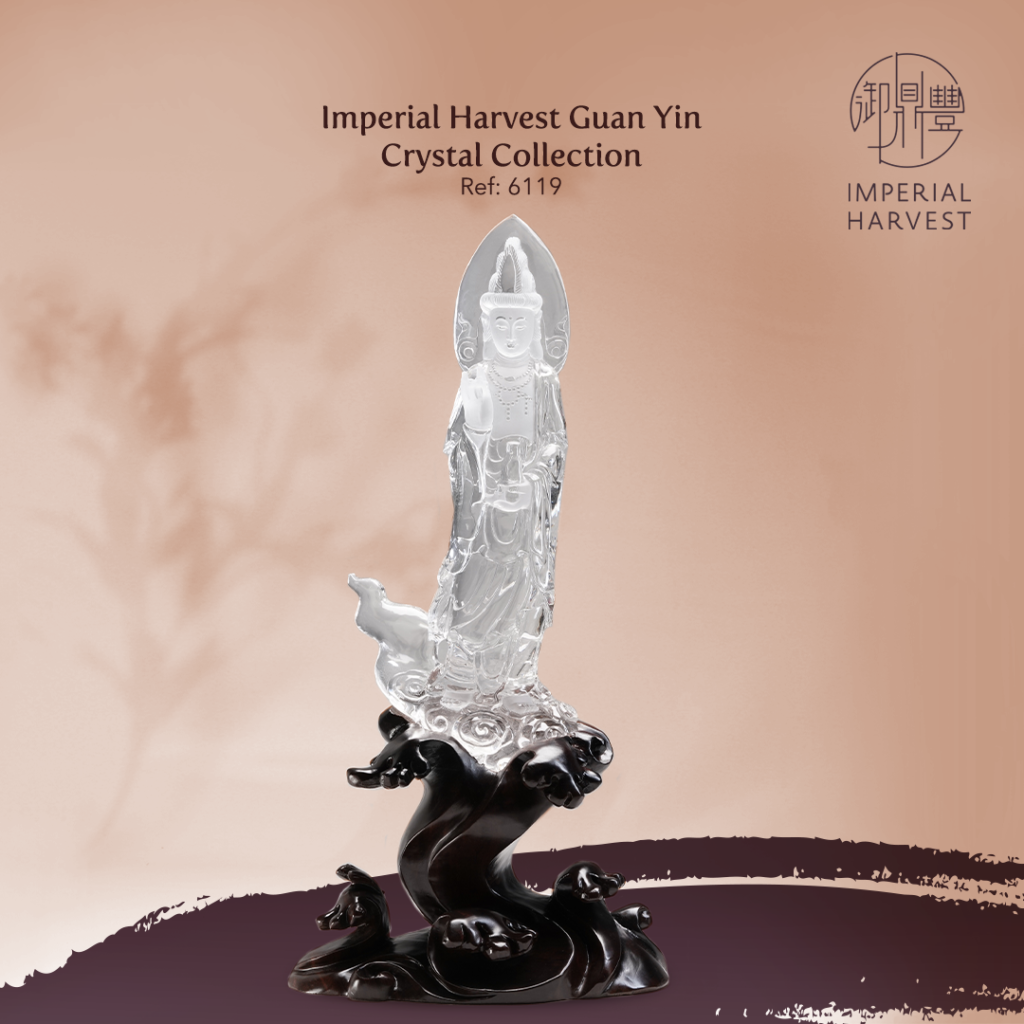 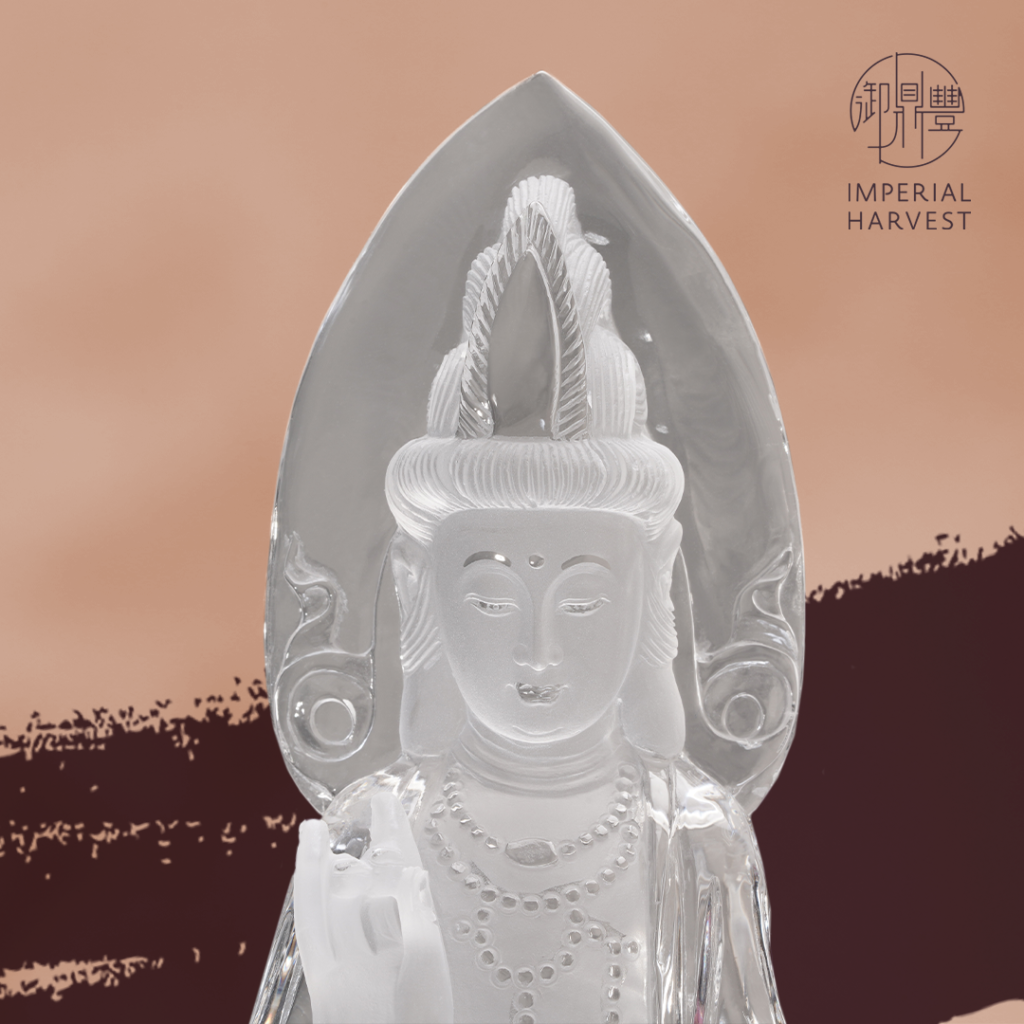 Guan Yin’s act of renunciation saw her taking a leap of faith to give up her worldly habits, leaving the comforts of the status quo as a privileged princess. In assuming nunhood, Guan Yin demonstrated vision, courage and faith. It resonates with our ability to forge our own destinies — to free ourselves of our mental shackles and find the courage to leave the comforts of the shore in search of new and unknown horizons.

At Imperial Harvest, we are inspired by the merits and values of Guan Yin, and strive to uphold the philosophies that she advocates. Guan Yin’s values resonate with our own, emphasising Imperial Harvest’s mission to guide our blessed clients with insights into achieving their fullest potential and turning their goals into realities.