Posted by Imperial Harvest on 23 August 2021

Indirect Wealth Sectors in the Home and Office

The indirect wealth sectors in our homes and offices hold the key to ushering in prosperity from secondary streams of income. These supplementary income streams could include sources such as financial investment portfolios, unanticipated windfalls and various inheritances.

This year, the seventh lunar month runs from 8 August to 6 September of the Gregorian calendar. Being the birthday month of Di Guan Da Di (地官大帝), the Supreme Ruler who oversees indirect wealth (偏财库), it is an ideal period to reap the auspicious indirect wealth blessings he bestows.

Based on rigorous studies and research, Imperial Feng Shui masters of the Qing dynasty found that indirect wealth sectors within each property could be activated with the proper installation of fine natural crystals. The correct activation of these sectors, according to Imperial Feng Shui principles, empowers the occupants with robust and rewarding streams of indirect wealth.

Staying true to the wisdom of Emperor Qian Long’s Imperial Feng Shui masters, Imperial Harvest today empowers thousands of blessed clients with the finest earthly treasures to realize their personal and professional pursuits. Just as the Qing dynasty flourished with Emperor Qian Long’s fervent patronage of Imperial Feng Shui, Imperial Harvest’s esteemed clients have gone on to become leaders and pioneers in their own right, with the blessings of their earthly treasures.

This auspicious seventh lunar month, Imperial Harvest celebrates the birthday of Di Guan Da Di with exquisite crystals designed to activate the indirect wealth sectors in your home or office.

The Imperial Harvest Crystal collection is meticulously designed by Master David, incorporating the wealth-garnering features of auspicious deities and creatures to endow the destined owner with abundance and prosperity. Imperial Harvest works directly with mine owners in Brazil to curate the finest raw crystals available. 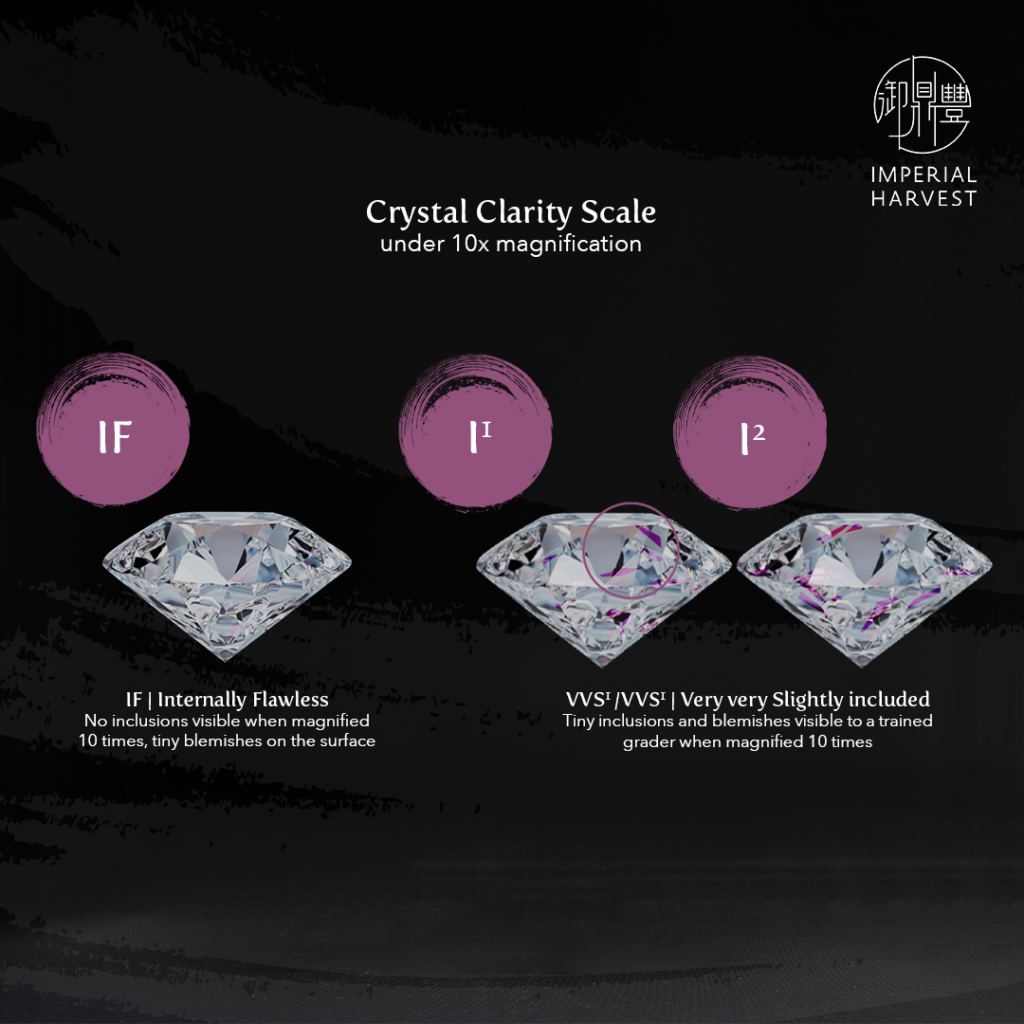 As crystals are formed deep within the earth, under extreme heat and pressure, virtually all contain “birthmarks”, or small imperfections. The clarity of a crystal refers to the degree to which these imperfections are present. Depending on the size, location and darkness of these imperfections, they can interfere with light as it passes through the crystal. Imperial Harvest’s crystals are invariably of impeccable clarity – they are of similar clarity as the crystals used to carve Emperor Qian Long’s extensive crystal collection 300 years ago.

Imperial Harvest’s crystals are those that achieve only the most stringent gemological standards. In Imperial Feng Shui, the clarity of a crystal is directly correlated with the speed at which prosperity is achieved.

Imperial Harvest’s Crystal collection consists of only the world’s finest naturally-coloured crystals. This means they have never been artificially treated to remove, add or alter any colours.

Spanning a range of colours, some of Imperial Harvest’s crystals are completely colourless, while others sport faint natural hues of brown, yellow or pink. 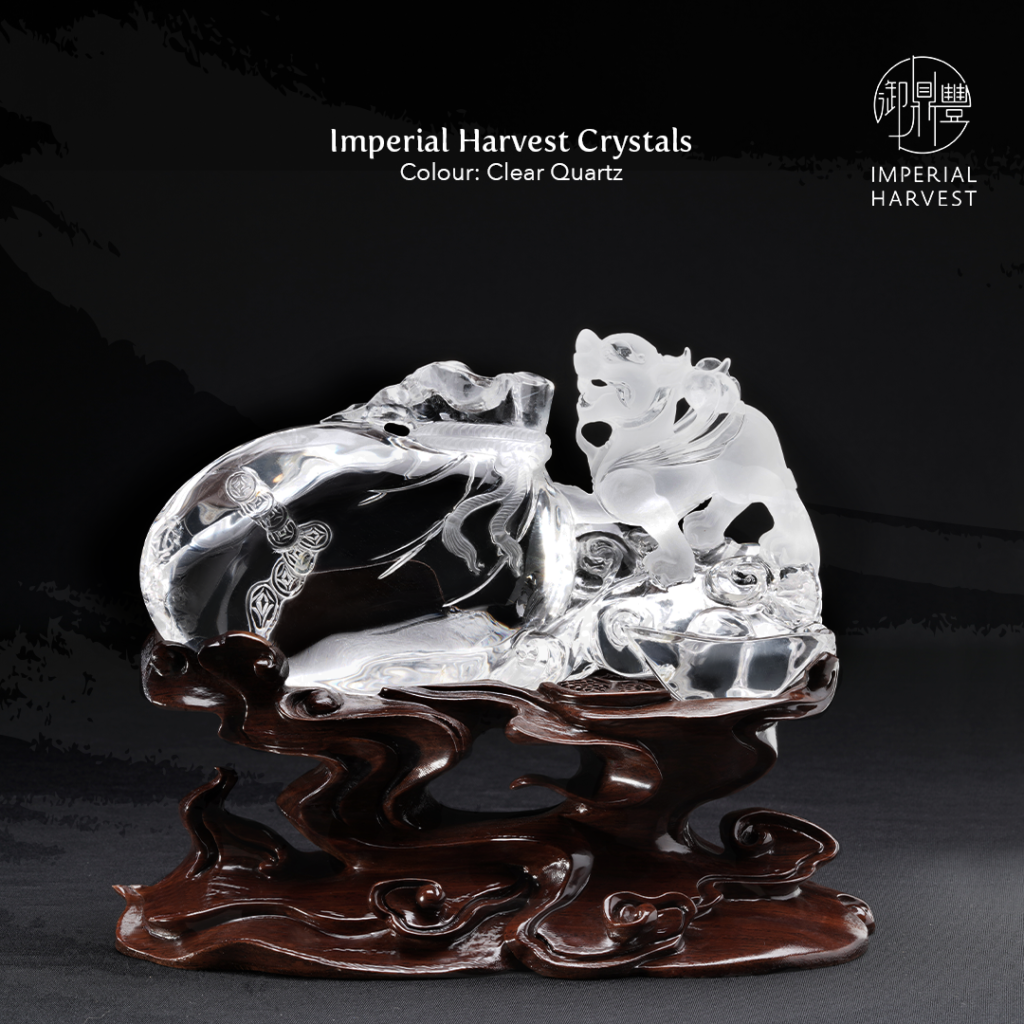 Clear Quartz is colourless and transparent, a result of the crystals growing with very little or no contact with their host rock. 99% of clear quartz in the market is tainted with impurities and hues of faint colours, having been treated with heat or gamma irradiation to induce colour. Imperial Harvest clear quartz crystals are derived only from the remaining top 1%. 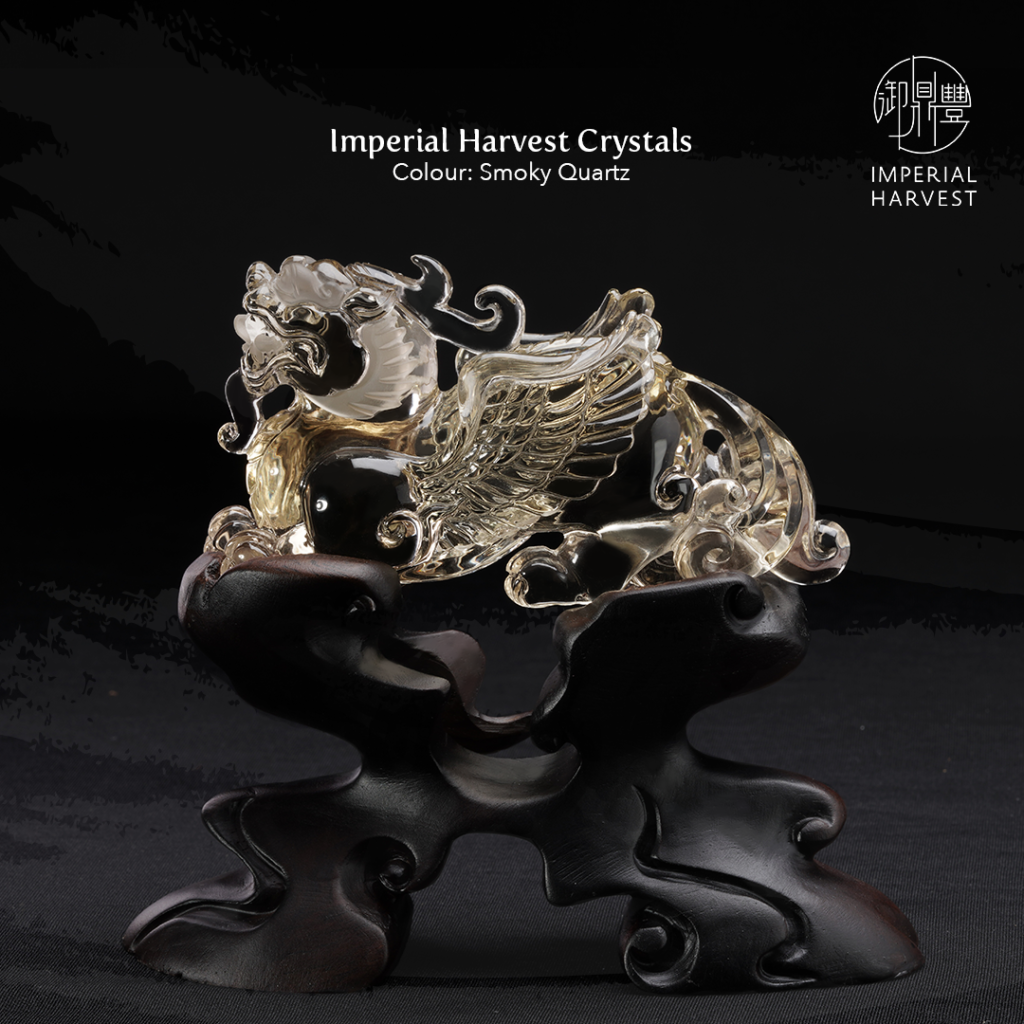 Smoky Quartz derives its smoky brown colour from the natural irradiation of silicon dioxide that creates the free silicon. Imperial Harvest’s highly-translucent smoky quartz crystals are extremely rare, making up just 0.5% of all smoky quartz in the market. The remaining 99.5% is either opaque or partially translucent. 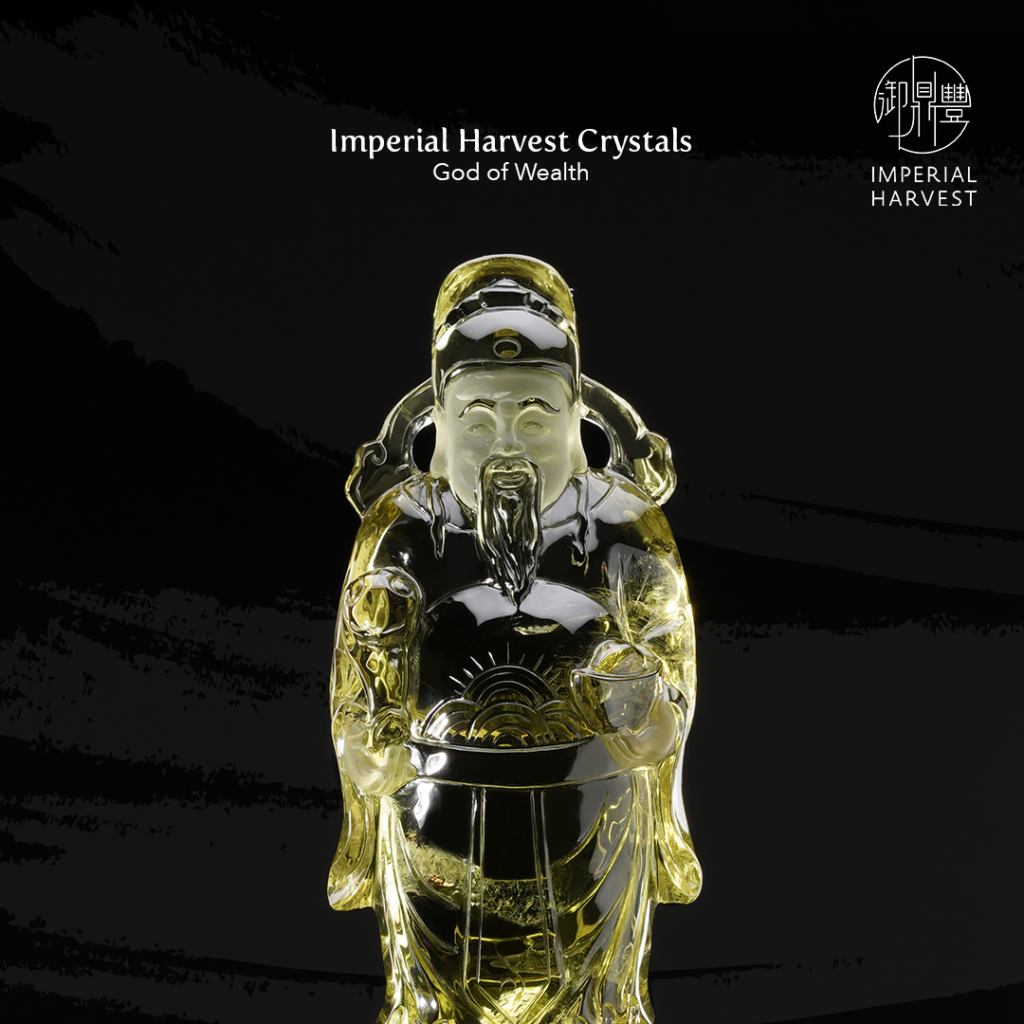 Citrine is one of the rarest crystals in the world. 97% of citrines available in the market are heat-treated amethysts or smoky quartz. In contrast, Imperial Harvest’s all-natural citrine crystals obtain their brilliant fancy yellow colour from natural ferric minerals present in quartz. 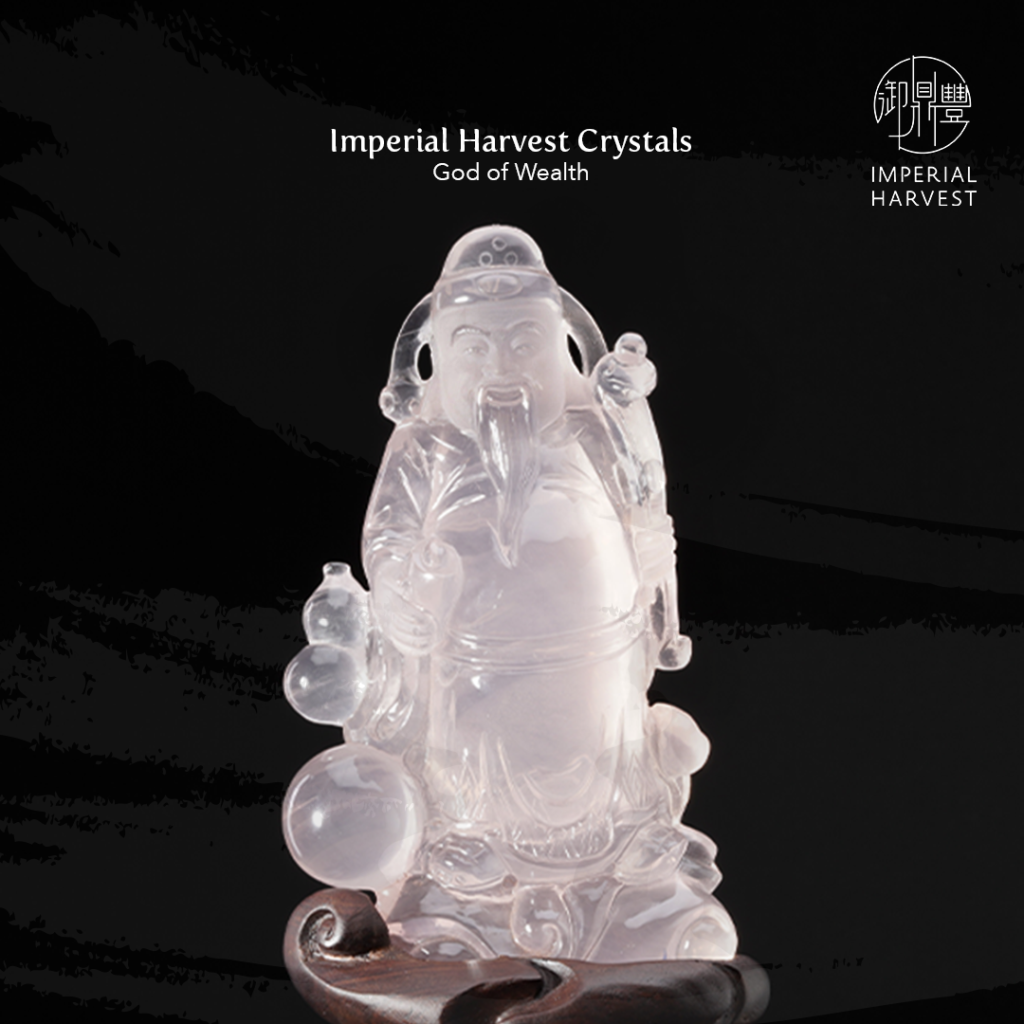 Rose quartz is one of the world’s most highly-prized crystals. Trace amounts of titanium, iron and manganese give rise to its pinkish hue. Only less than 5% of crystals in the Imperial Harvest collection is rose quartz. 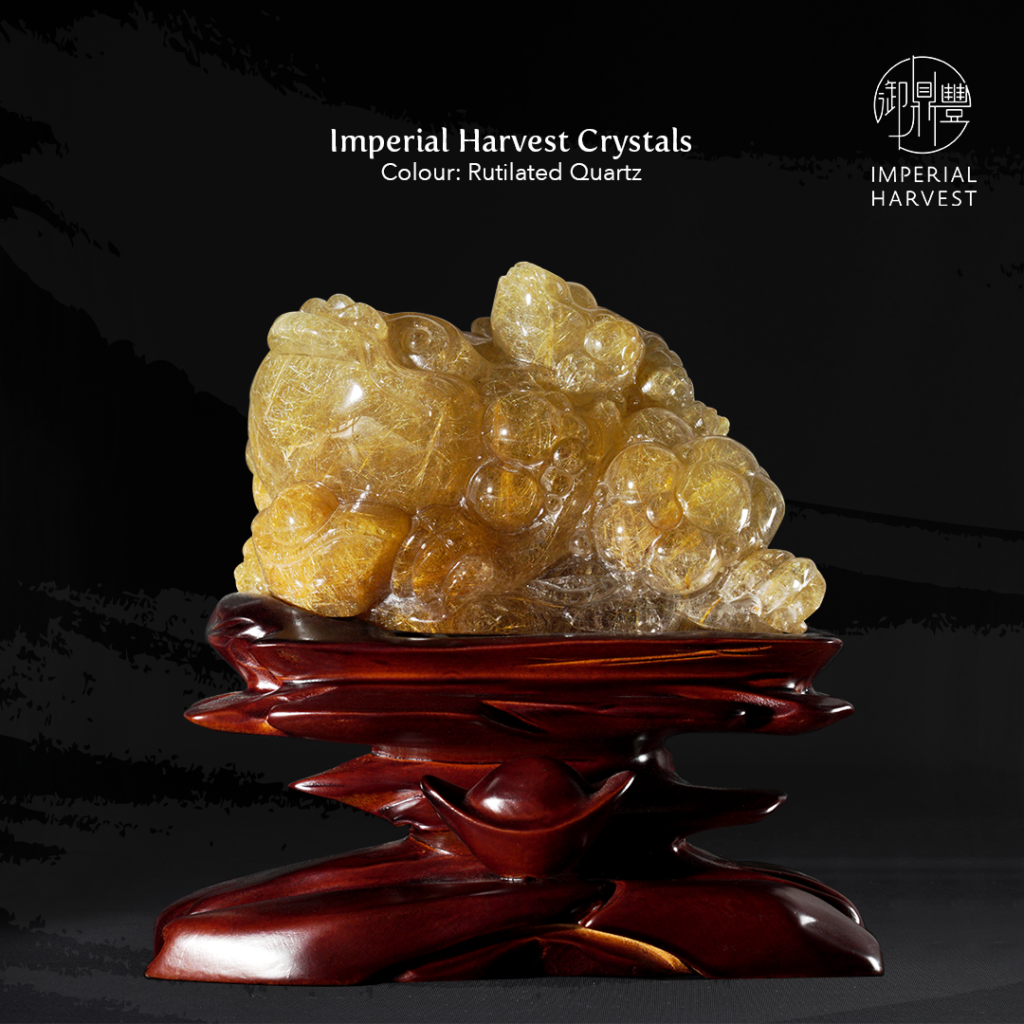 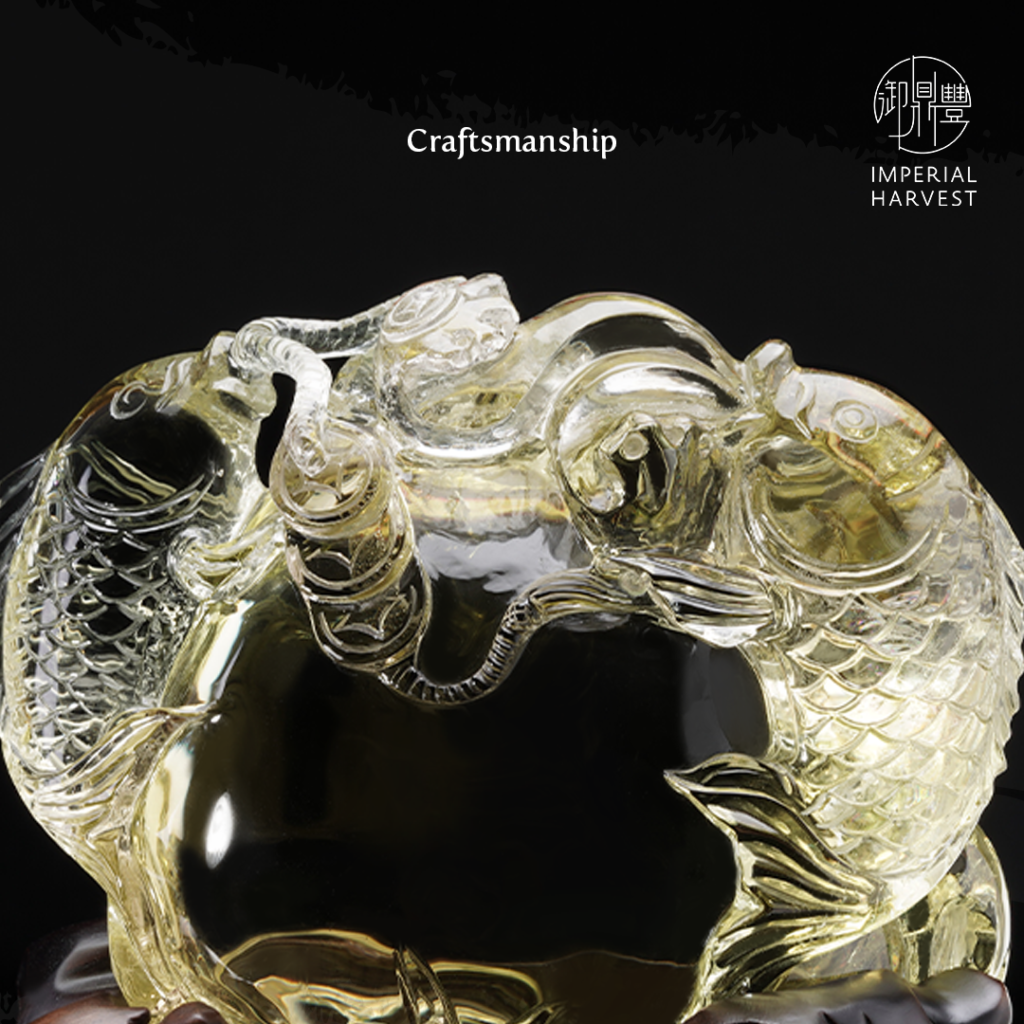 While a raw crystal owes much of its beauty to nature, its manipulation in the hands of a master craftsman allows it to truly shine as a work of art. Imperial Harvest honours the world’s finest crystals with the most impeccable craftsmanship available. From conceptualization to completion, each Imperial Harvest crystal undergoes extensive designing and hand-carving before the finishing touches are applied by the most skillful artisans of our time.

Every Imperial Harvest crystal begins life in Master David’s design sketchbook. After meticulous work to determine and finalize the sketches, they are sent to our state-of-the-art workshops, where our master craftsmen cut and carve according to Master David’s enlightened vision.

This process is carried out entirely by hand, by a dedicated artisan, with skills acquired from generations of master artisans before him. This imbues each Imperial Harvest crystal with impeccable detailed elements which no machine on Earth could ever replicate.

Drawing on Imperial Feng Shui principles, crystals must be deftly created to maximize the amount of light reflected from their surfaces. This allows them to redirect earthly energies to the fullest extent, thereby channeling the greatest amounts of auspicious energies to the occupants. At Imperial Harvest, all of our crystals are hand-fashioned with a technique that accounts for their unique refraction index and reflective properties. 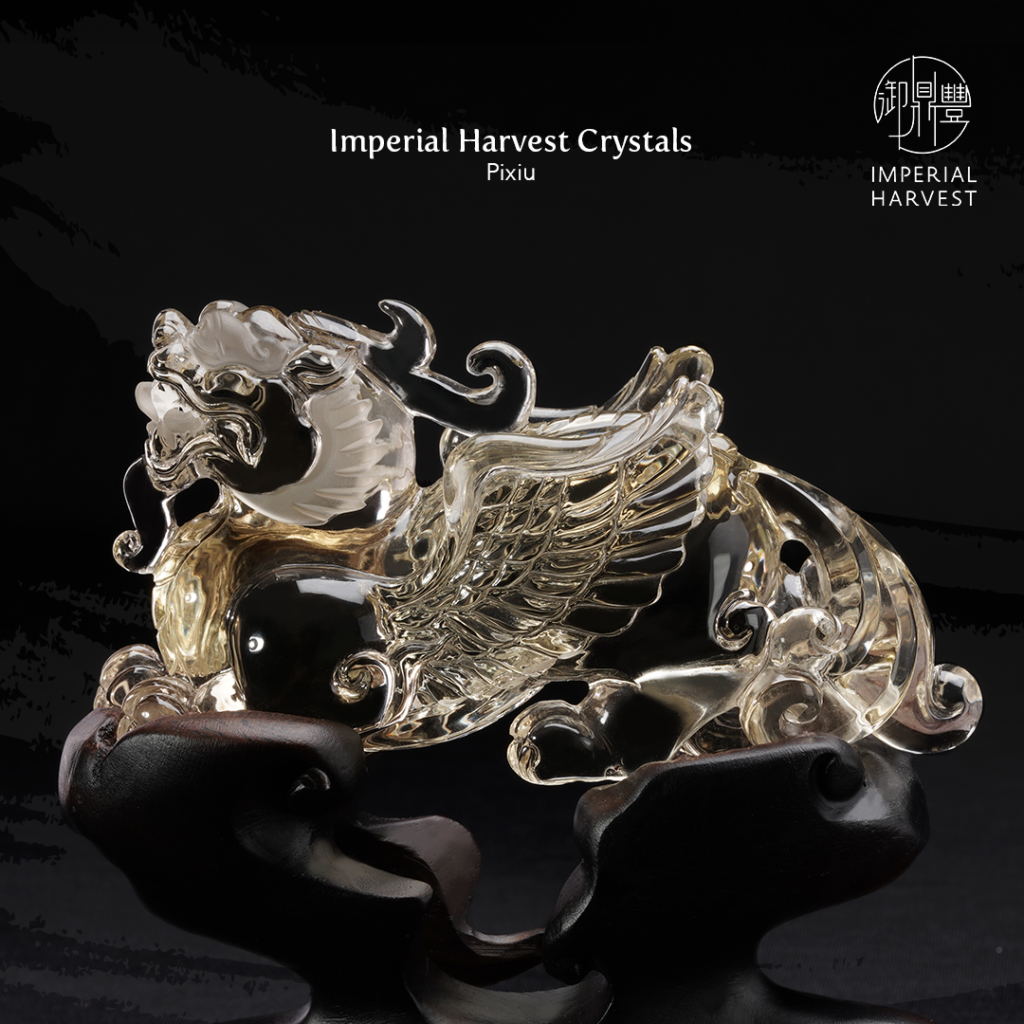 The Pixiu is one of the most iconic mythical creatures in the Imperial Harvest collection. It is a ferocious-looking fusion of a dragon’s head, a horse’s body and unicorn claws. The winged animal’s bold silhouette resembles that of a lion. 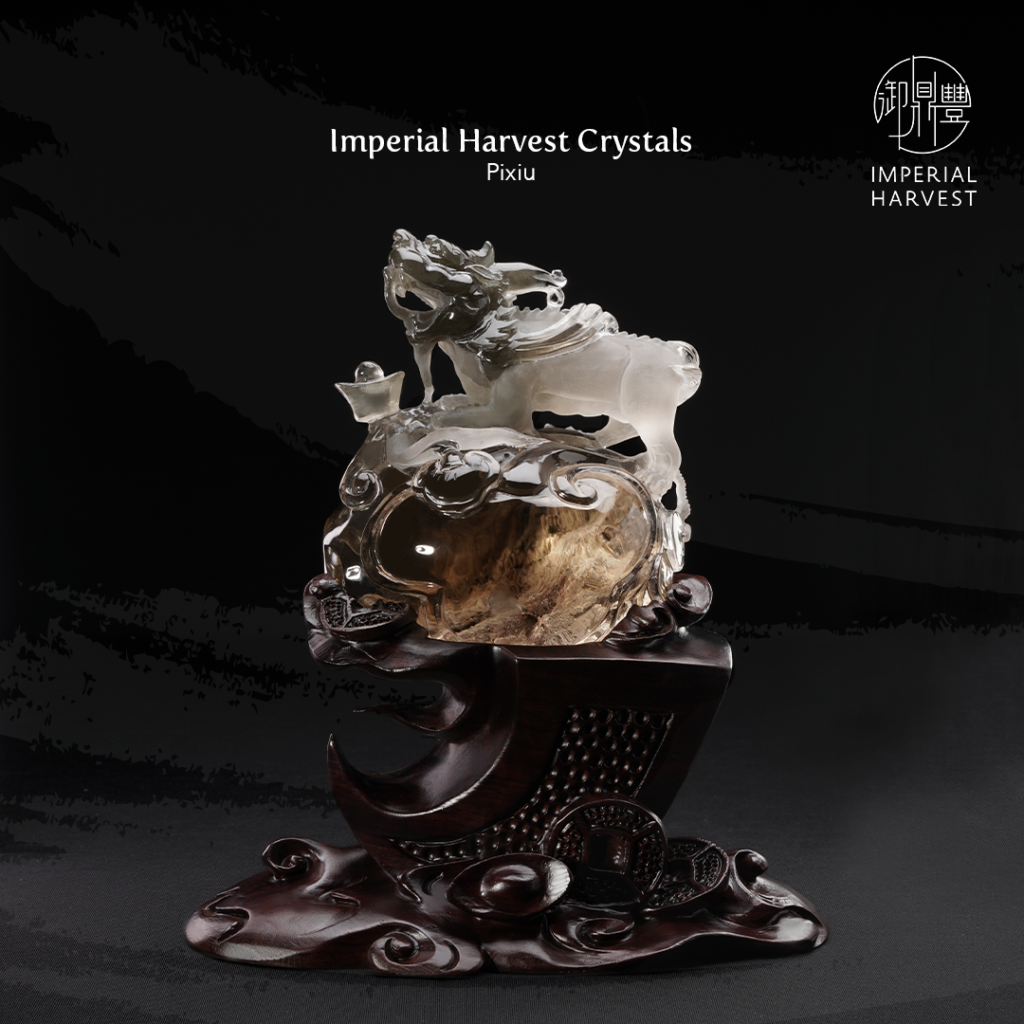 Legend has it that the Pixiu regularly consumes large amounts of precious elements such as gold and silver, but does not excrete any of it. This gives it the unique ability to draw wealth from all directions while preventing it from flowing out. As the Pixiu possesses an insatiable appetite, it is a symbol of a constant inflow of extremely good fortune and prosperity. This helps its destined owner rapidly accumulate assets and resources from a range of investment and windfall sources. 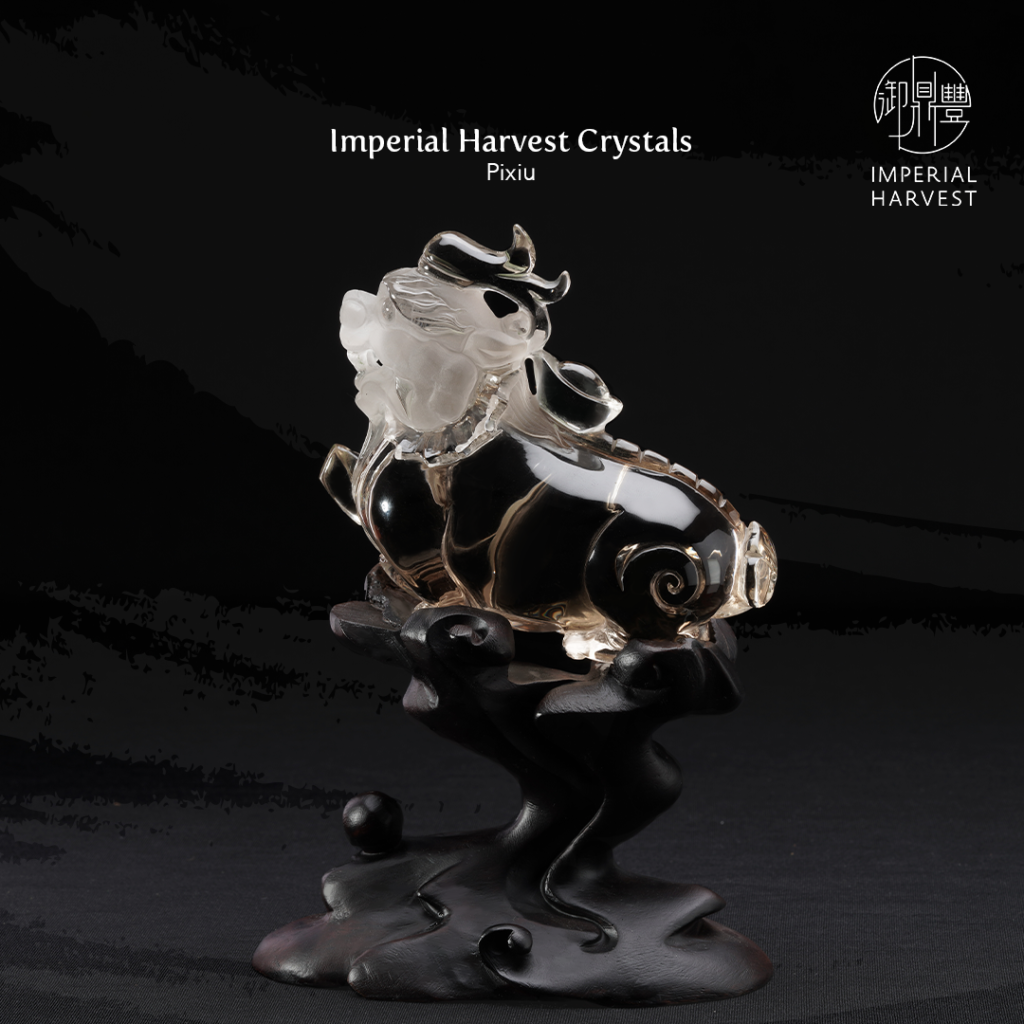 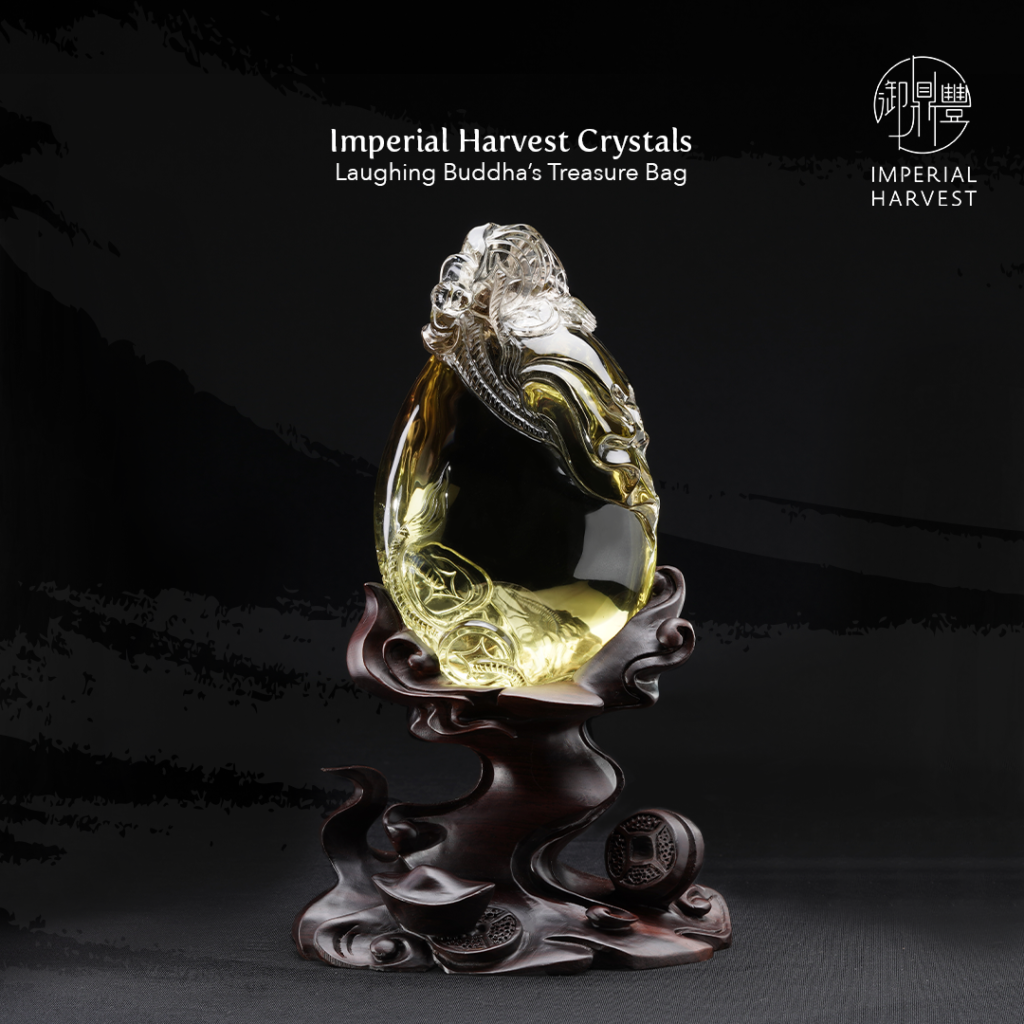 The Imperial Harvest Laughing Buddha Crystal Collection is a tribute to the Laughing Buddha’s joyous outlook. He is almost always depicted with his treasure bag that is filled with rare jewels, gold ingots and elixirs, making it a prominent symbol of perennial auspicious luck and prosperity. This evokes the notion of amassing a large fortune and achieving financial contentment in life.

The Laughing Buddha’s Treasure Bag Crystal is the ultimate representation of abundance and prosperity, and the destined owner is blessed with a life of contentment. 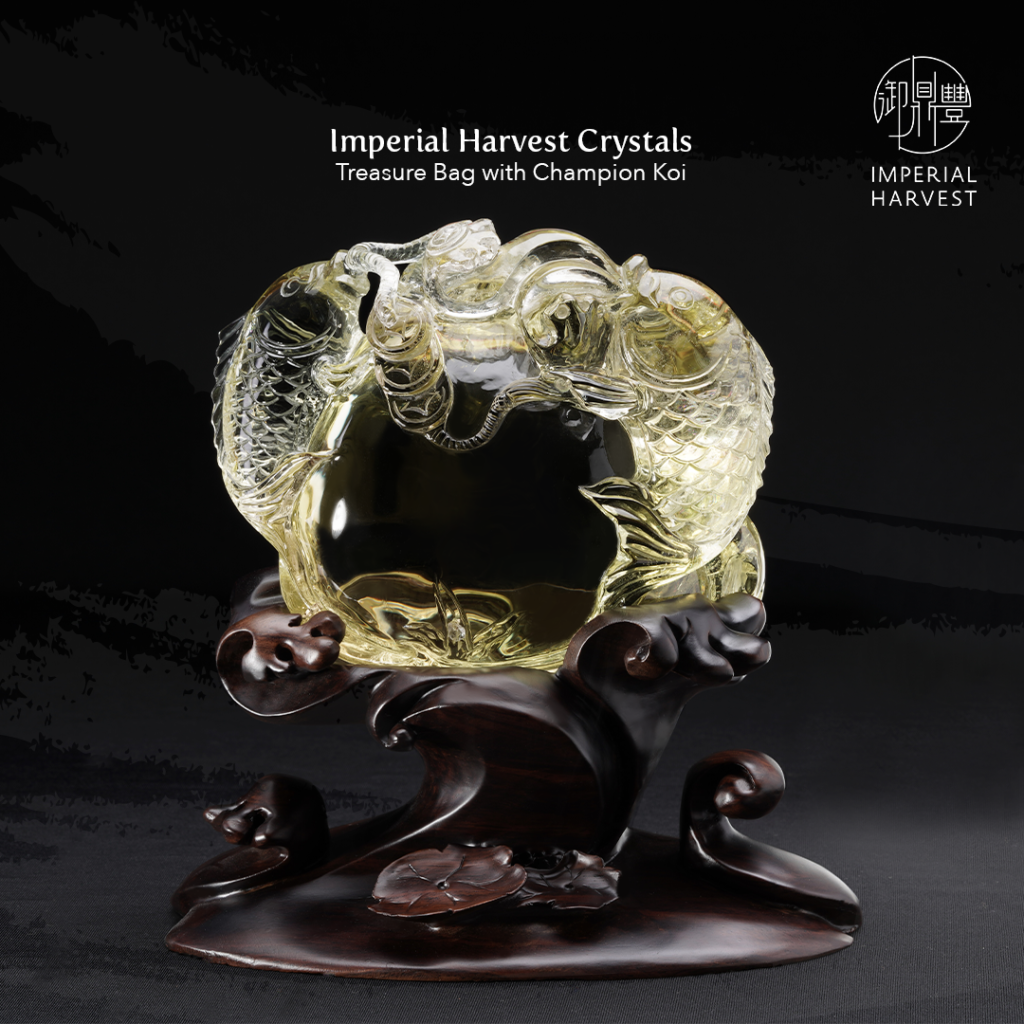 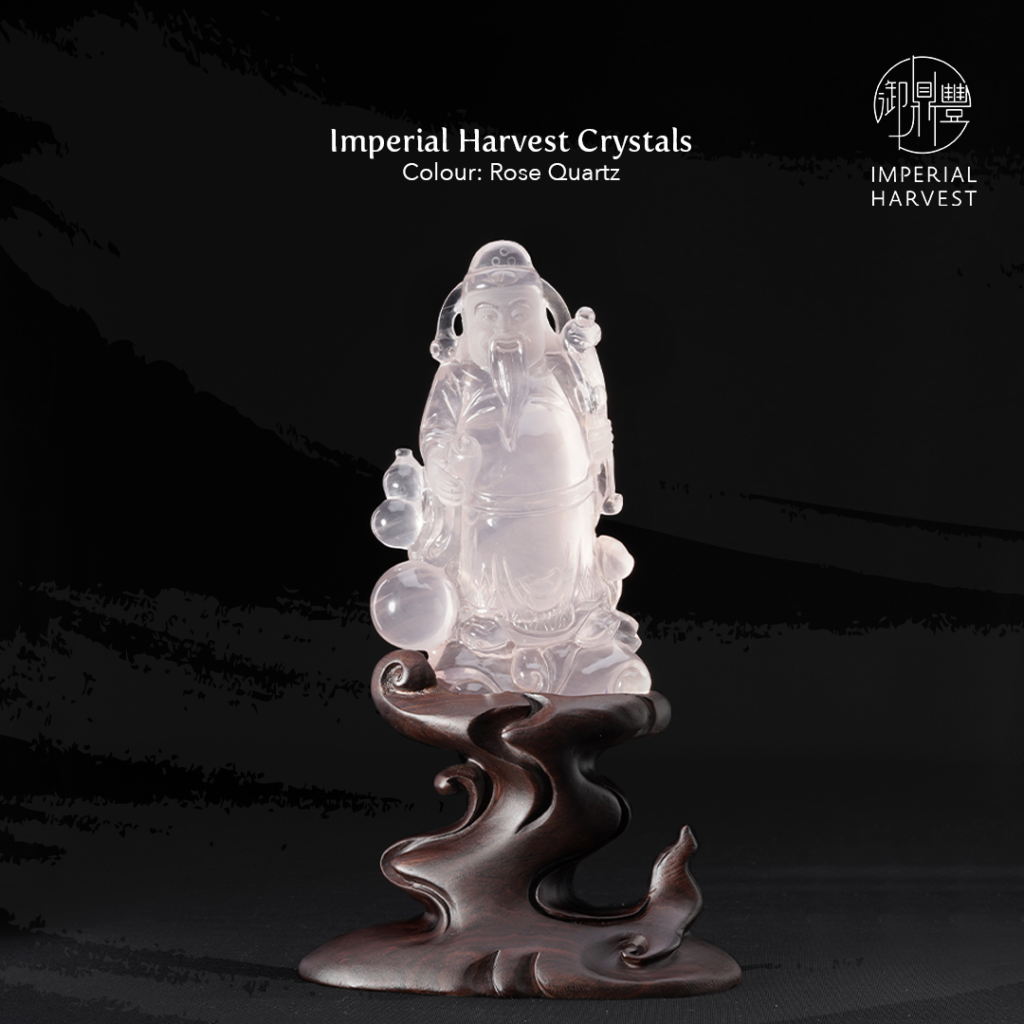 The God of Wealth is widely worshipped for his governance of fortunes. The Imperial Harvest God of Wealth crystal depicts him holding an auspicious scroll with the Chinese words “招财进宝”, proclaiming the arrival of wealth. In his other hand is the Ruyi Scepter, a symbol of authority and respect that confers exceptional luck upon those seeking power and leadership. It also represents a smooth-sailing life for its destined owner. 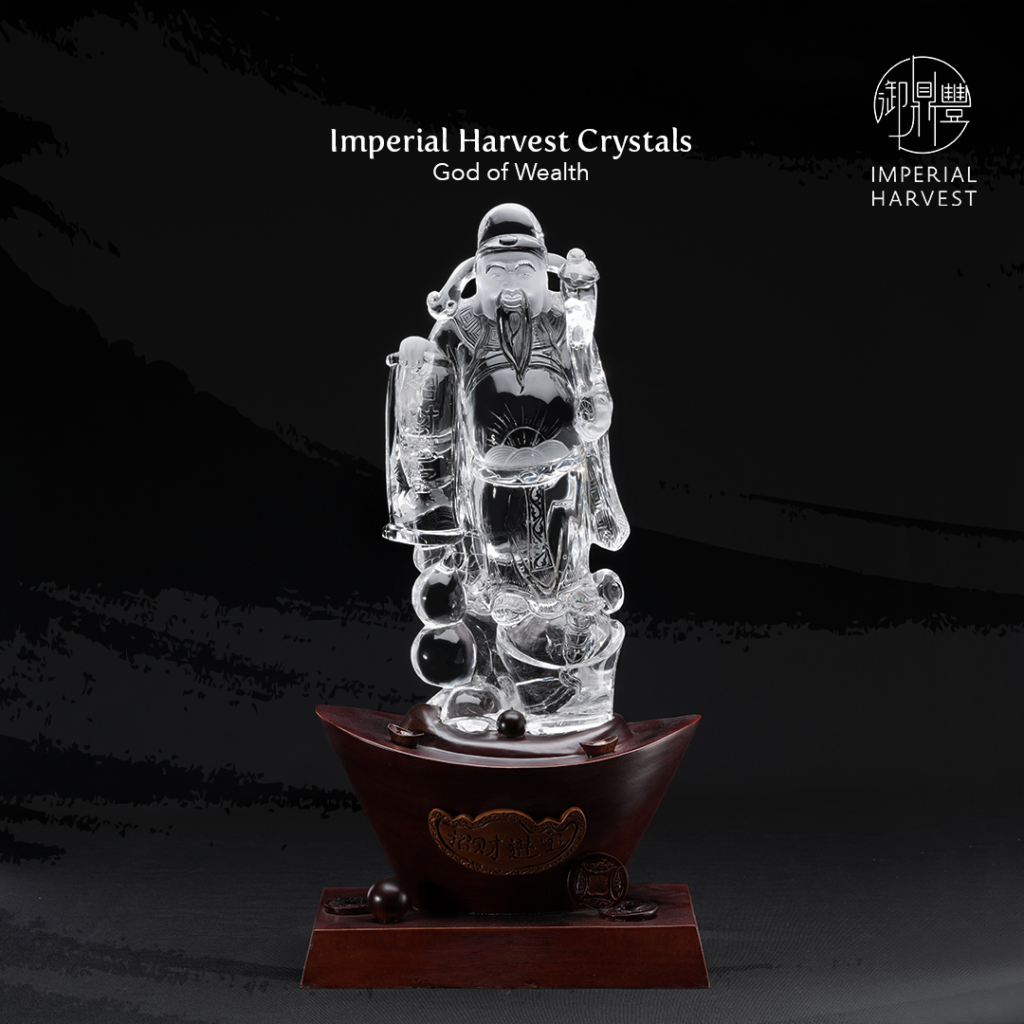 Bringing a torrent of auspicious luck, the Imperial Harvest God of Wealth ushers good fortune into destined owners’ homes and workplaces, and helps them secure prosperous and fulfilling lives with secure, high-paying and respectable careers. 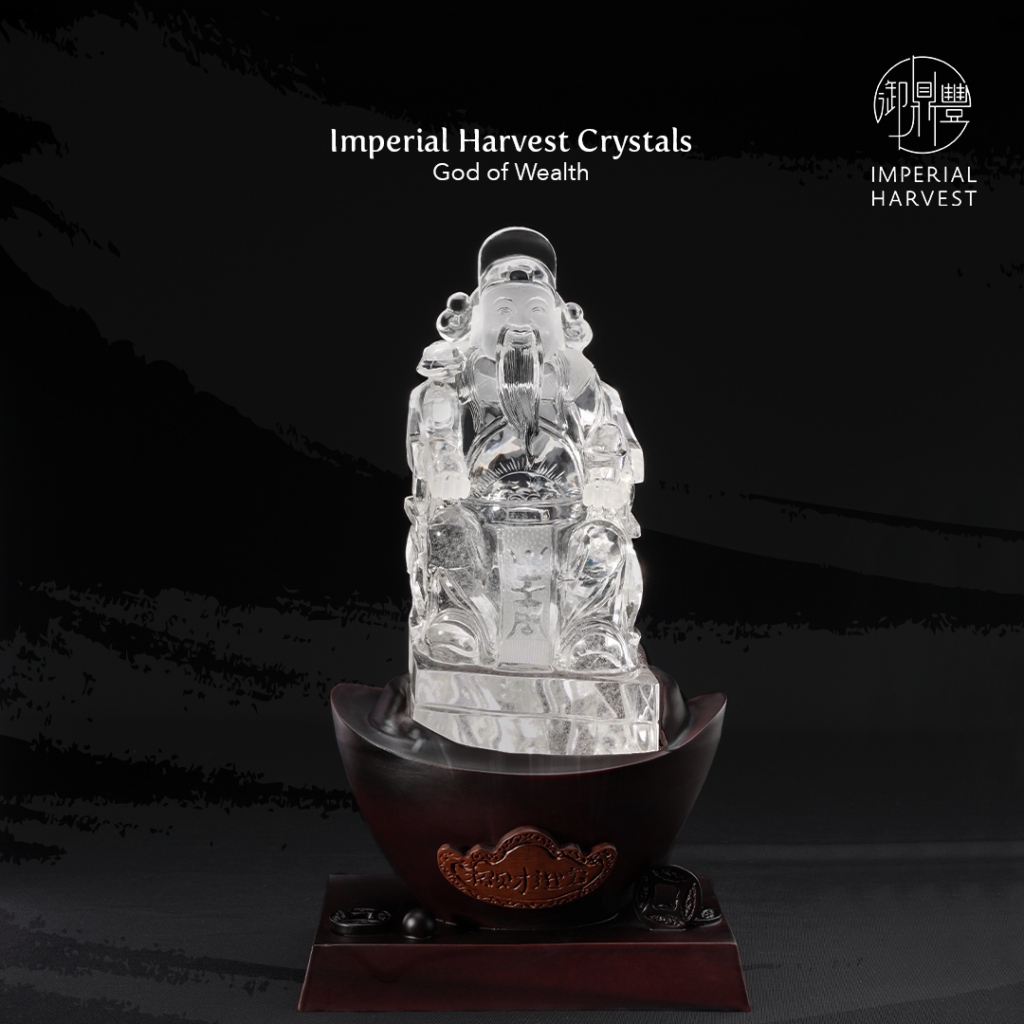 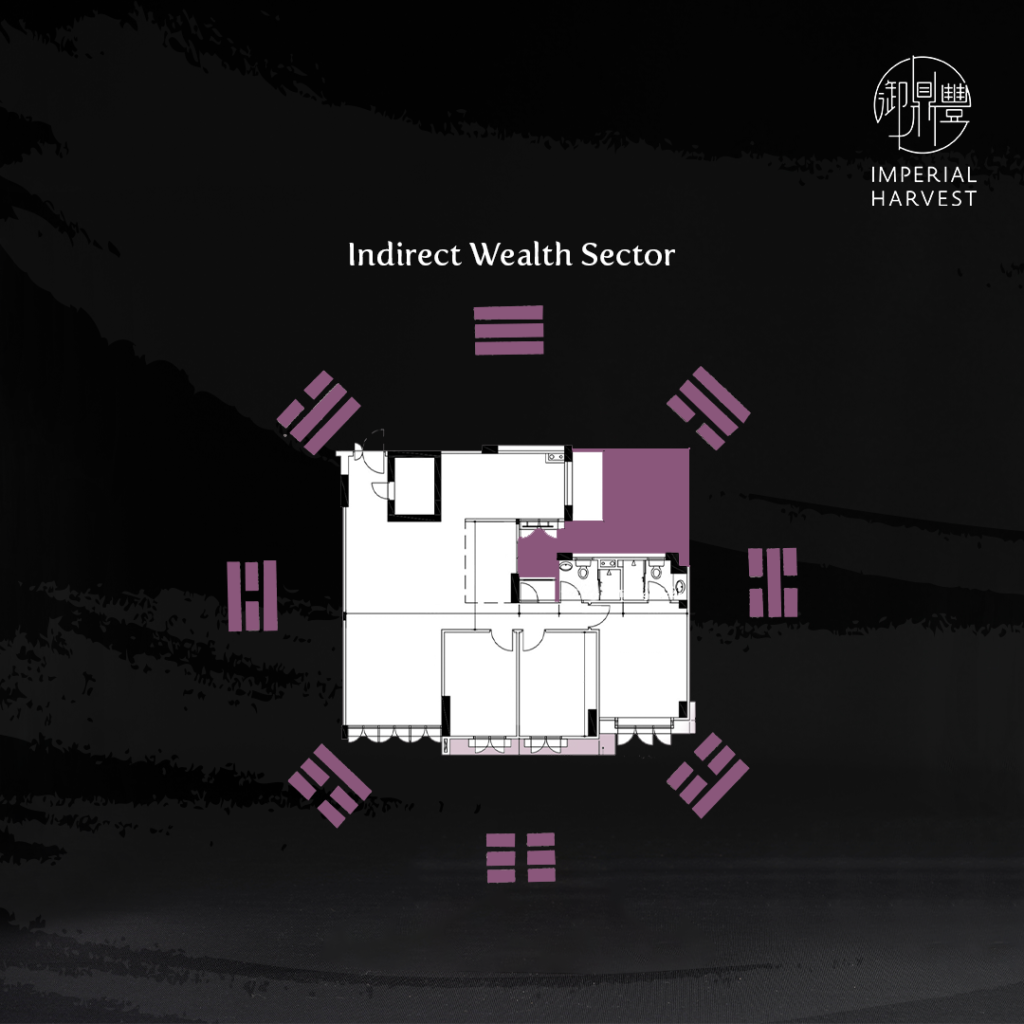 While Imperial Harvest crystals are effective in activating the indirect wealth sectors within the property, these sectors may sometimes be missing.

In ancient China, the presence of important sectors was ensured by constructing properties in “regular” shapes, most commonly squares or rectangles. Unfortunately, modern-day considerations, competing priorities and architectural techniques often gloss over the importance of such “regularity”, resulting in missing sectors and negatively affecting the occupants.

The Imperial White Inkstone negates the noxious energies resulting from the missing sectors, and restores the optimal balance of energy within the property. At the same time, it empowers occupants with benefactors, power and authority. 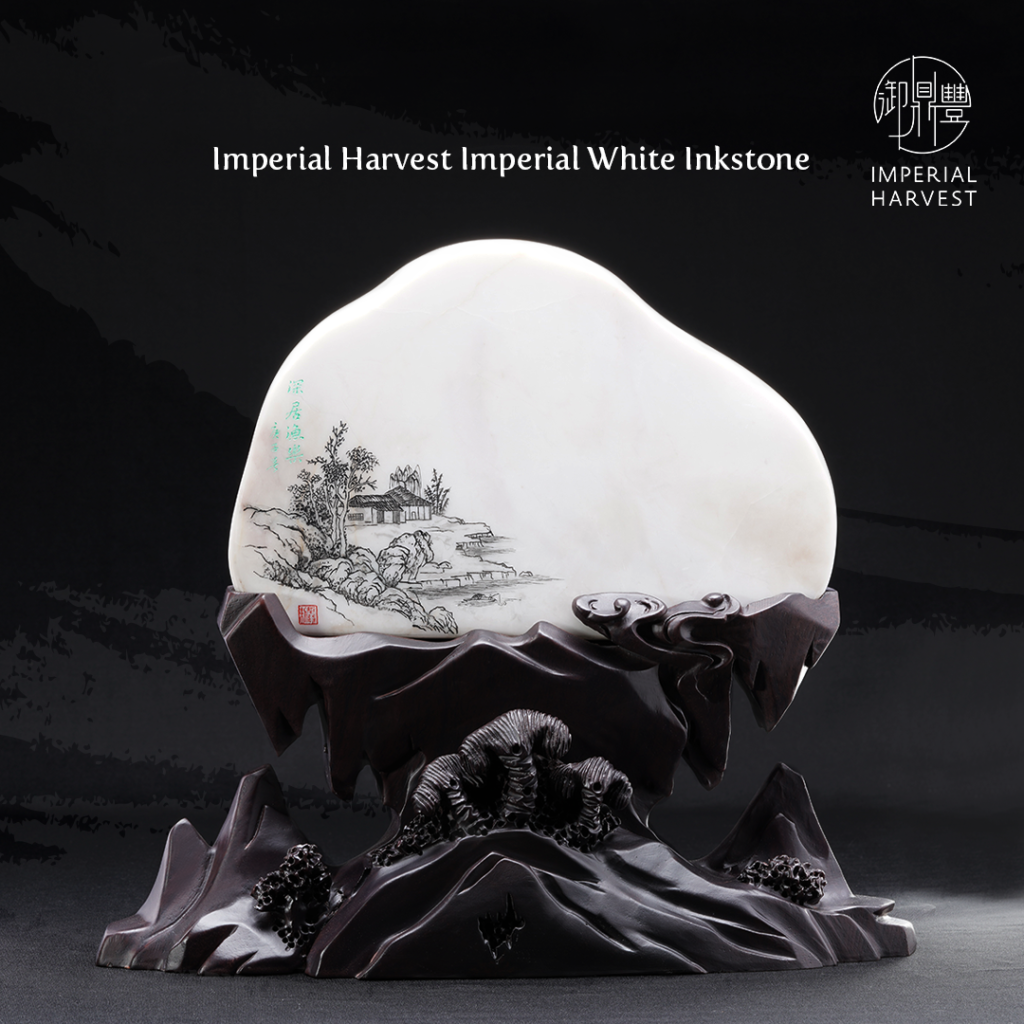 The Imperial White Inkstone’s versatility and range of applications was recognized by Emperor Qian Long. He amassed an impressive collection which he used on a daily basis to grind his specially-concocted red vermilion, while reviewing daily state affairs at the Imperial Court.

According to Imperial Feng Shui principles, this meditative grinding of the vermillion empowered Emperor Qian Long with intuition, benefactors and luck to make important state decisions.

This steadfast adherence to Imperial Feng Shui fuelled the success of the Qing Dynasty, propelling it to a long and prosperous reign of 268 years.