Posted by Imperial Harvest on 22 January 2021

A Diamond is forever but a Jadeite is eternal.

The Imperial Harvest’s Exquisite Jadeite Painting is a timeless, eternal and treasured family heirloom that is designed to be carefully safeguarded for the next generation.

It is also the world’s first jadeite painting collection – the result of Master David’s groundbreaking reimagination of the traditional jadeite table screens.

During the Qing dynasty, Emperor Qian Long’s team of Imperial Feng Shui masters had deployed these jadeite table screens around the imperial palace, especially in the emperor’s room and the studios of government officials, to activate the auspicious wealth sector (Water Star) in each space.

The Irreplaceable Skill of Hand-carving, Polishing and Finishing 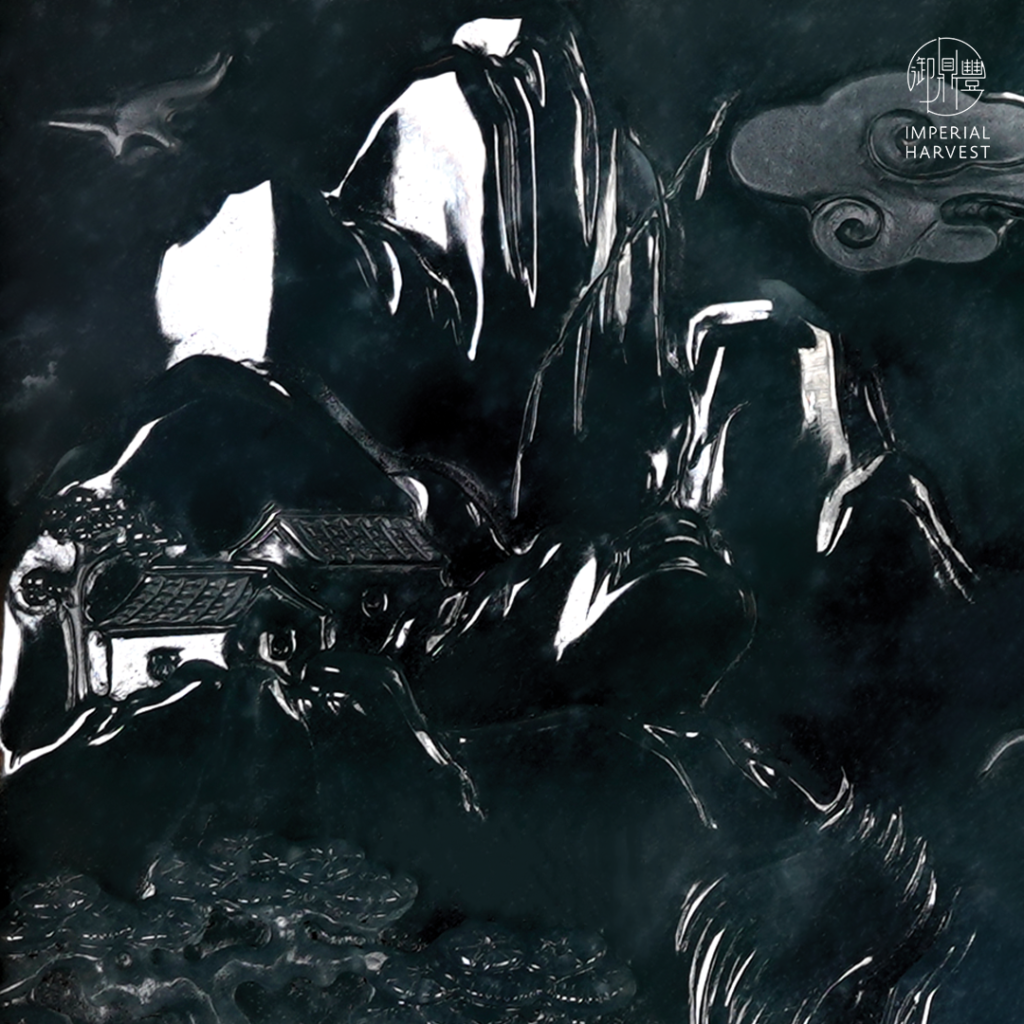 The jewel in the crown of an Imperial Harvest treasure is the fact that it has been hand-carved, manually polished and hand-finished by a dedicated, trained jadeite artisan with skills passed down through generations.

Each painting starts with a flat base, which our artisan fashions to varying levels of relief. This allows the painting to manipulate the reflection of light and boast a sense of depth. To execute this effect flawlessly, only the most translucent jadeite must be chosen to be the canvas. 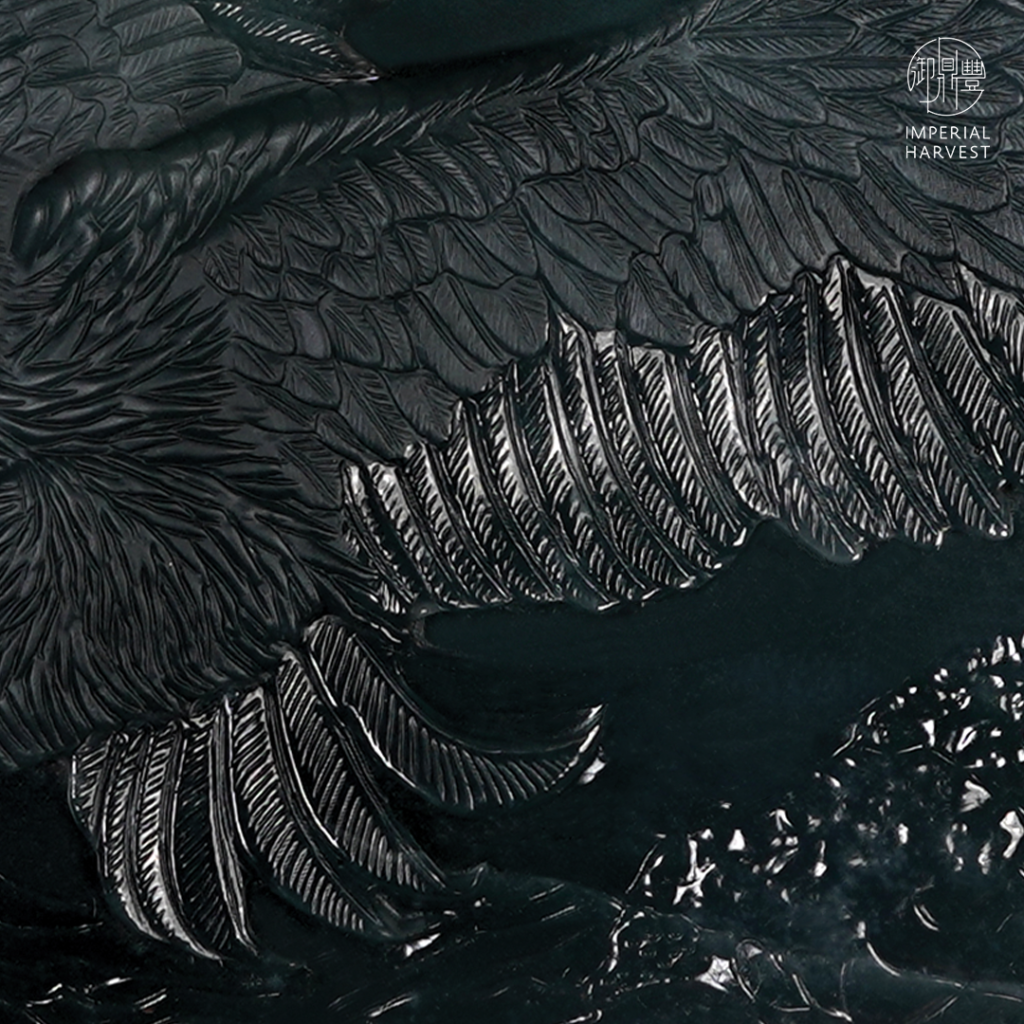 The result is a nuanced and masterful depiction of various textures such as the life-like scales of a dragon, the graceful petals of a flower and the rippling waves of a river. Many of these textures can be admired in the three collections of Imperial Harvest’s Exquisite Jadeite Paintings.

In this article, we share the inspiration behind each collection and the benefits of adorning your house or office with each of these Imperial Harvest’s Exquisite Jadeite Paintings.

The Celestial Deities jadeite paintings are the crown of the collection as they embody omnipresent beings with immeasurable powers. Throughout history, devotees and followers alike have prayed conscientiously and earnestly to these deities, wishing for good luck and prosperity for themselves and their families.

With this in mind, Master David has immortalised them onto the jadeite paintings for blessed clients to reap their auspicious energies. Under the auspices of Master David, no effort was spared in replicating every detail, regardless of how minute it is, and bringing to life the most formidable manifestations of these celestial deities. 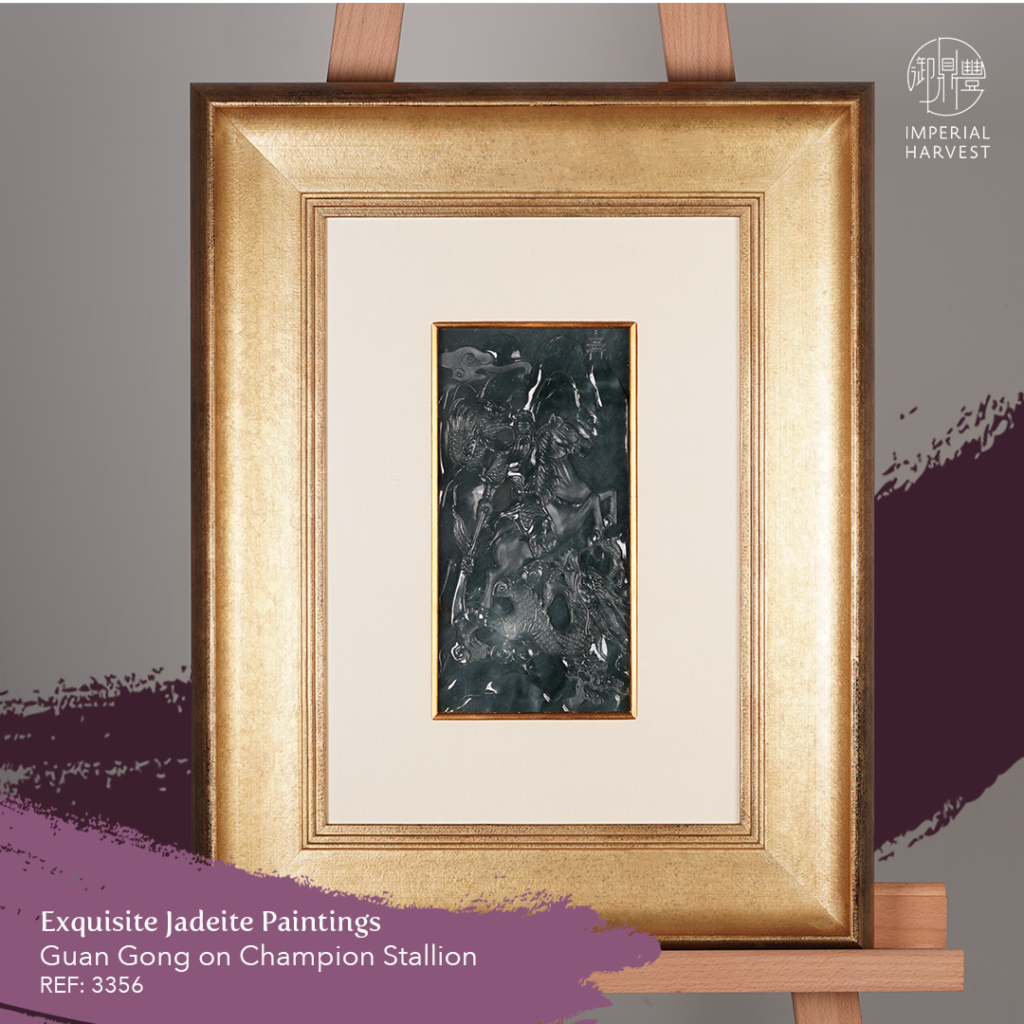 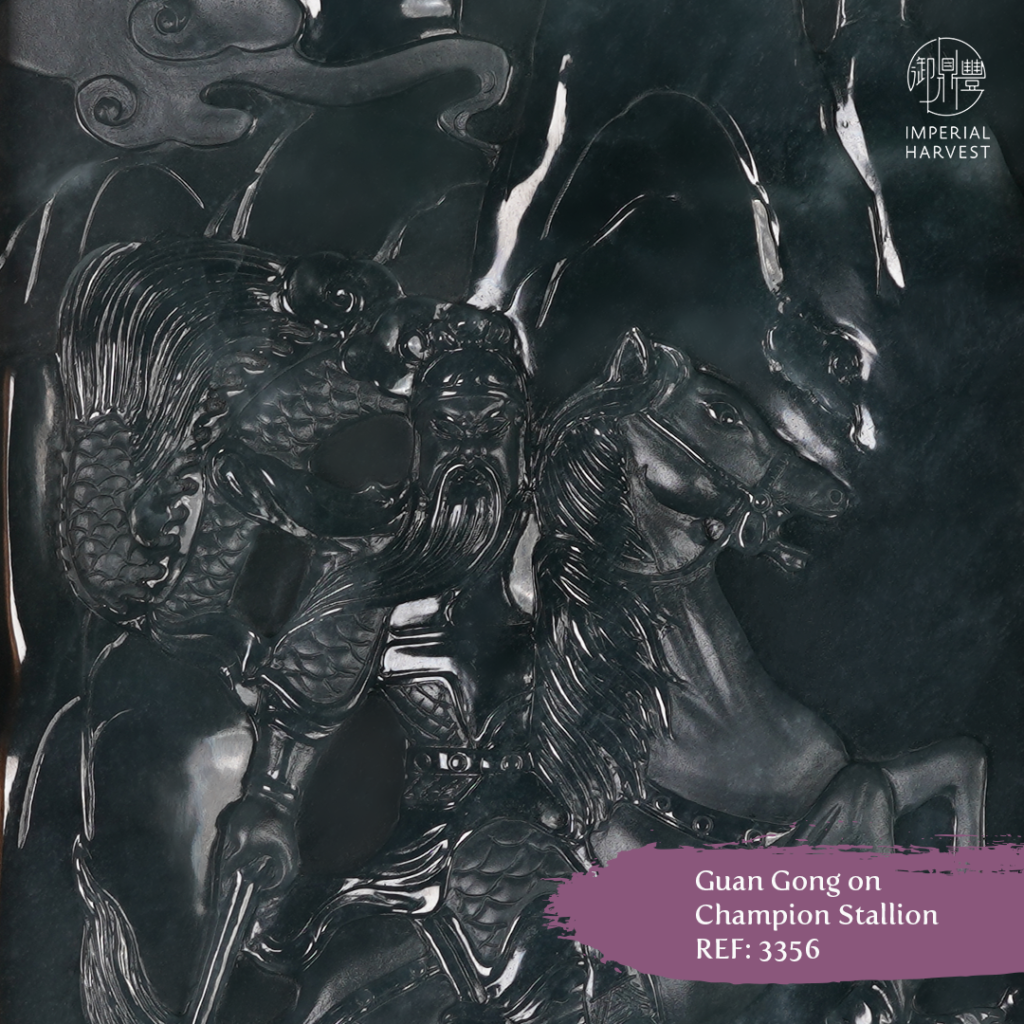 Guan Gong is widely known and worshipped as the Business God of Wealth, commonly seeked out by those looking for a massive sales breakthrough in their business and career.

Since his introduction in Imperial Harvest treasures, Guan Gong has helped countless business owners, realtors and insurance agents to attract and close million-dollar sales opportunities and gain powerful referrals from benefactors, guiding them to become top producers in their respective fields.

He is also equipped with the Green Dragon Sabre (青龙偃月刀). Weighing in at 42 kg, it is the heaviest weapon ever wielded by an army general. This is the same sabre responsible for helping Guan Gong to cut through the five most challenging city defences and kill the six most powerful generals of their times (过五关，斩六将).

In modern context, the sabre enables business and sales professionals to eliminate stiff competition, obstacles and challenges and emerge victorious in the closing of every sale.

The Mythical Creatures jadeite paintings draw inspiration from the mythology of legendary creatures in ancient China. In Chinese mythology, these creatures are iconic symbols responsible for ushering in good fortune, prosperity and wealth.

Their splendour transcends life in Imperial Harvest’s Exquisite Jadeite Paintings, where every feather and every scale is conveyed with a deft hand and a remarkable attention to detail. 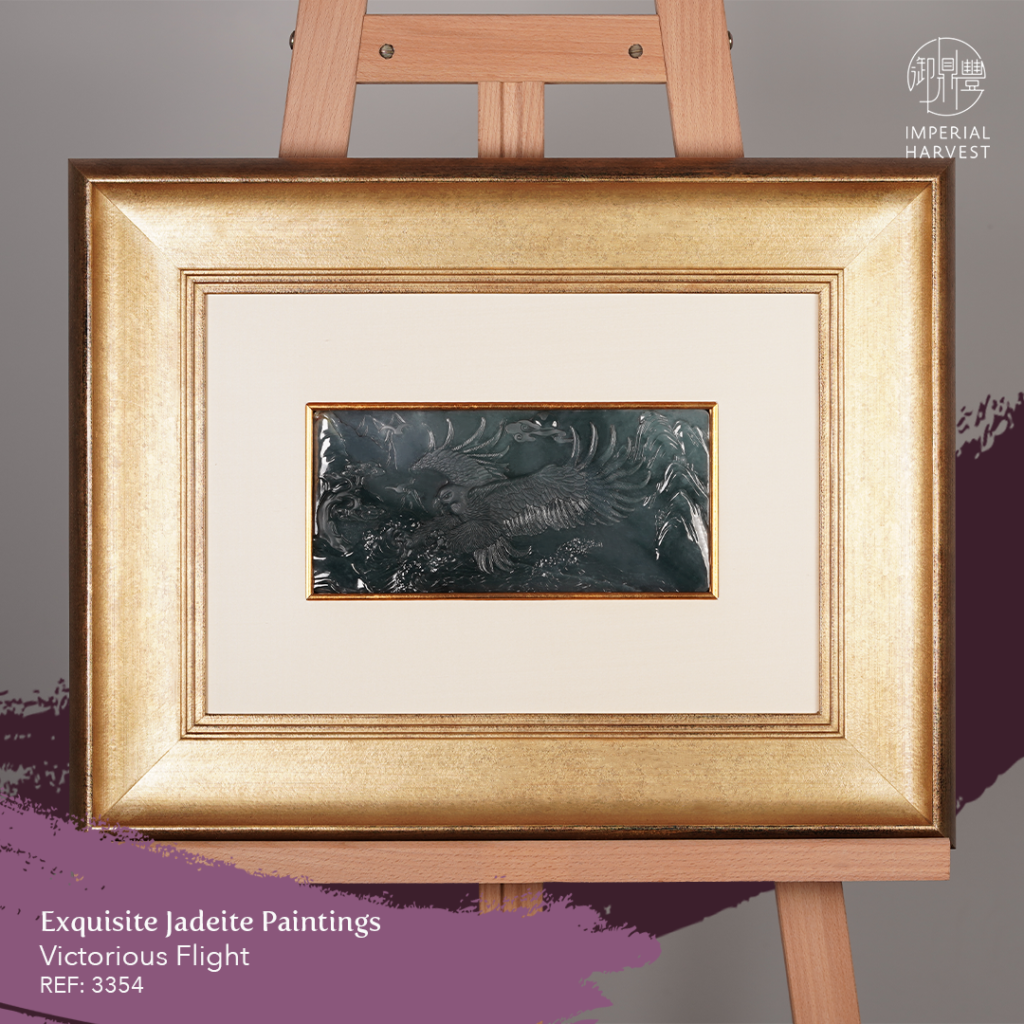 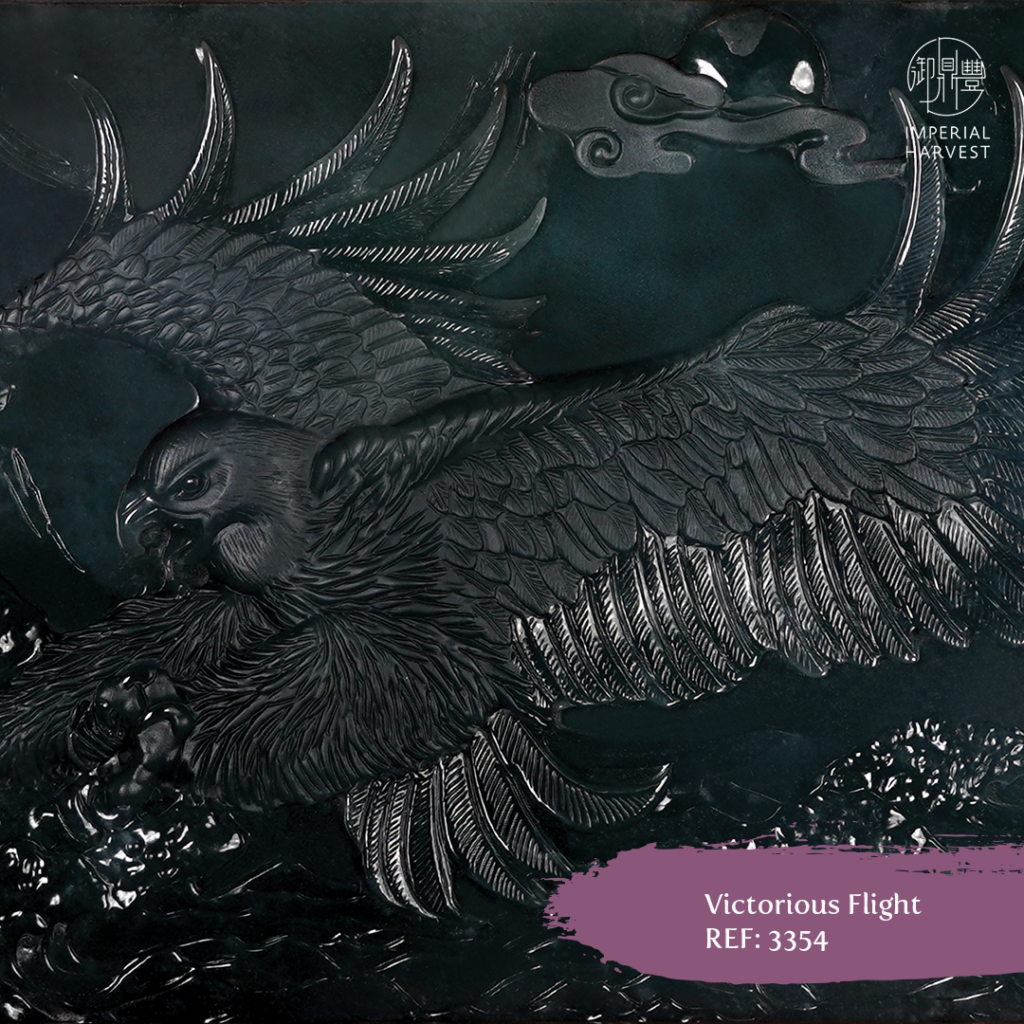 As the king of the sky, the eagle is revered as a symbol of strength and courage. Its most recognisable feature is its wings, which it spreads far and wide to quickly slice through the air at a moment’s notice. For those seeking to seize every opportunity in their business and sales, this decisiveness is indispensable.

The eagle is also armed with extraordinary eyesight. On one hand, its binocular vision allows it to spot its prey from more than a kilometre away. On the other, it has an uncanny ability to see both forward and to the side at the same time, giving it a shrewd awareness of its surroundings.

So relentless is the eagle in pursuit of its goal that it is the very representation of a proficient business person or sales executive at the top of his game – ferocious in his appetite for million-dollar opportunities and ready to leverage any advantage that presents itself. Honing such strategic acumen is the key to achieving business and sales breakthroughs. 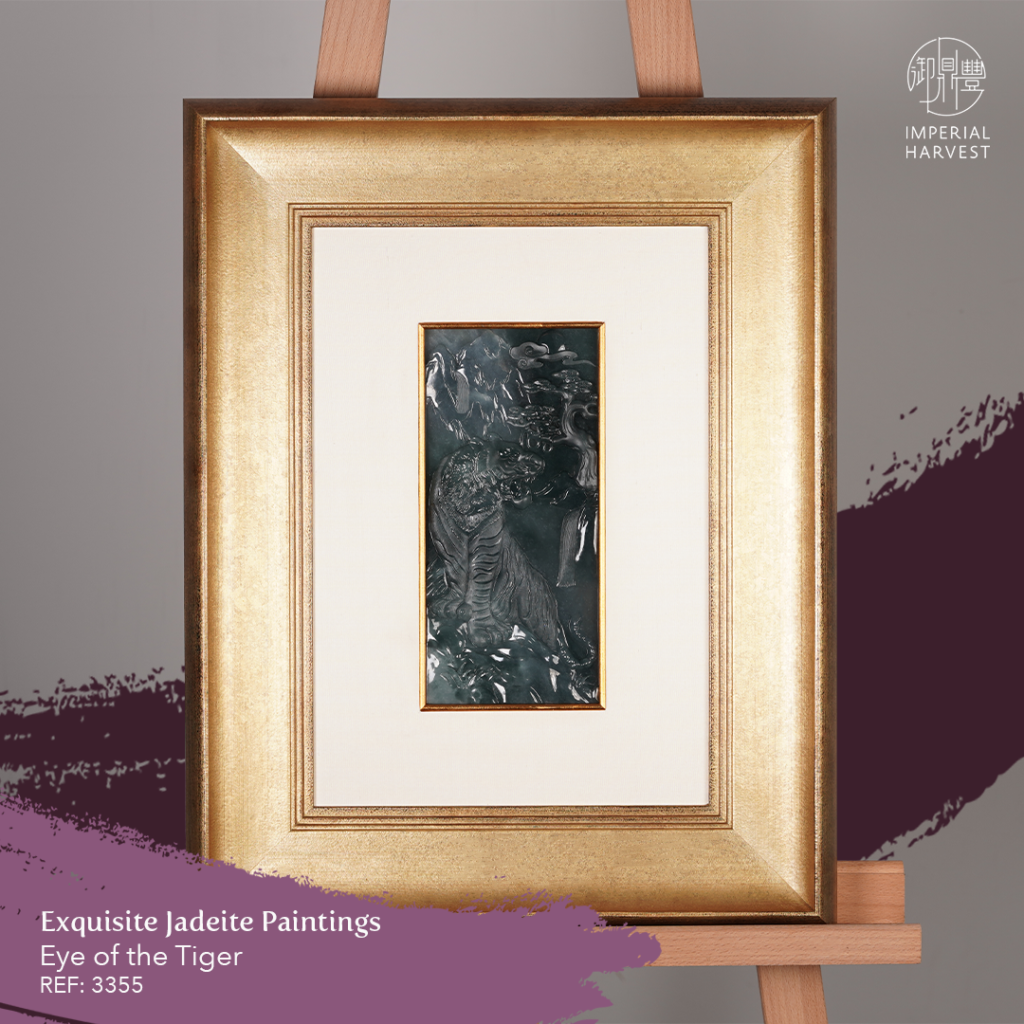 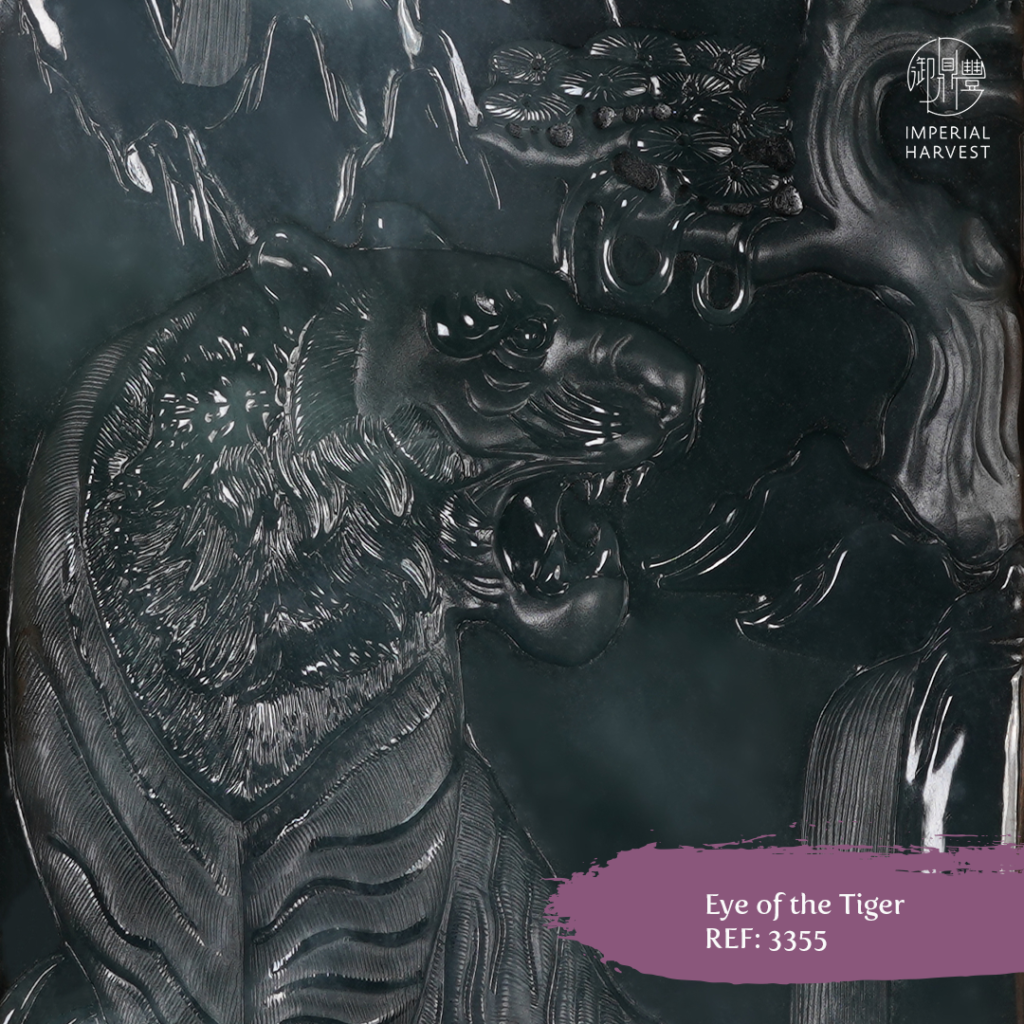 The tiger occupies a special place in Imperial Feng Shui. This is because the stripes on a tiger’s forehead make up a pattern that looks like the Chinese character 王, or king. As such, the tiger is commonly regarded as a natural-born leader.

This is reflected in its hunting style. Known to hunt only once every week, a tiger must ensure its kill is substantial enough to sustain itself for the whole week. It does not tackle its challenging prey head-on, instead taking its time to stalk its reward before pouncing on it at the most opportune time.

Similarly, the most effective leaders in the corporate world possess these attributes. They understand the importance of planning ahead and investing the time to constantly study the competition. As a result, their decisions are backed by data and systematic analysis as opposed to intuition, and their work delivers meaningful impact for their companies.

A mastery of these skills helps career professionals to command the respect of their peers and become leading authorities in their respective fields – both crucial drivers for steady career progression, leading to job promotions and salary increments. 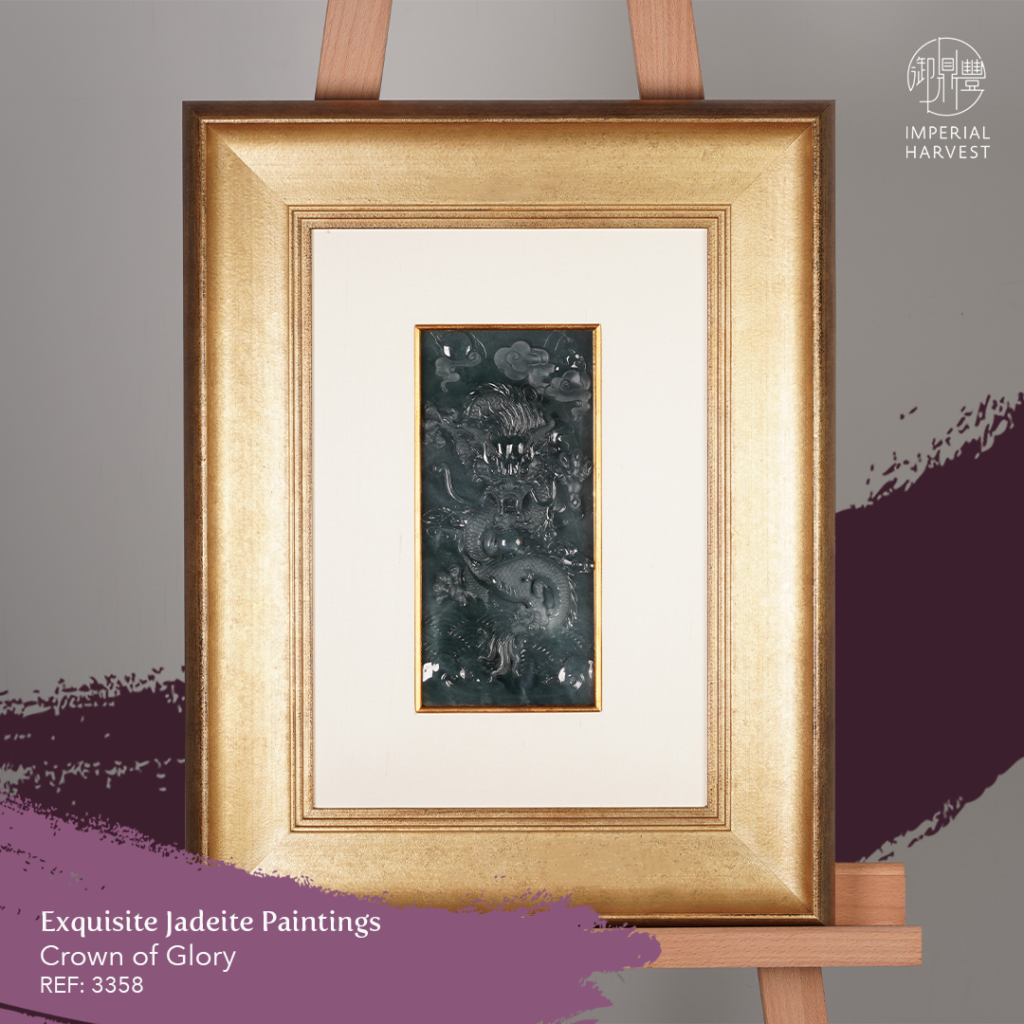 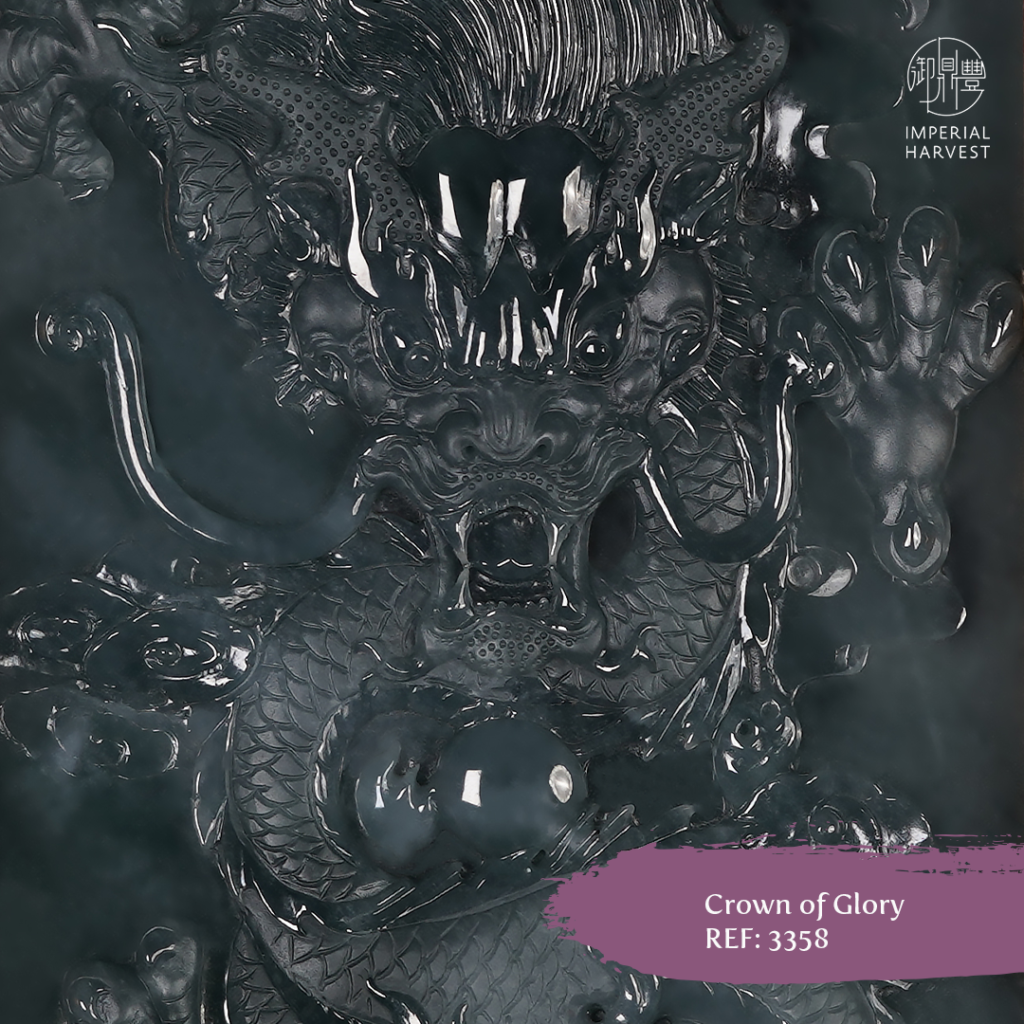 Since ancient China, the Imperial Dragon has been highly revered and regarded as the most auspicious emblem of wealth, power and authority. This is because it is endowed with five claws on each foot. In Chinese culture, a dragon with five claws belongs to the highest tier of dragons.

Hence, it is synonymous with the Chinese emperors, who would fervently order motifs of the Imperial Dragon to be embossed on their robes, thrones and nearly every inch of the imperial palace. During the later years of the Qing Dynasty, the Imperial Dragon was even adopted as the national flag.

The Imperial Dragon is said to emit a special form of Qi known as ‘Sheng Qi’ or ‘Celestial Breath’. This essence of life is a magnet for good fortune, abundance and success. In fact, the mythical creature’s jurisdiction over all five elements in Imperial Feng Shui – namely Earth, Fire, Wood, Metal and Water – blesses its owner with supreme luck. 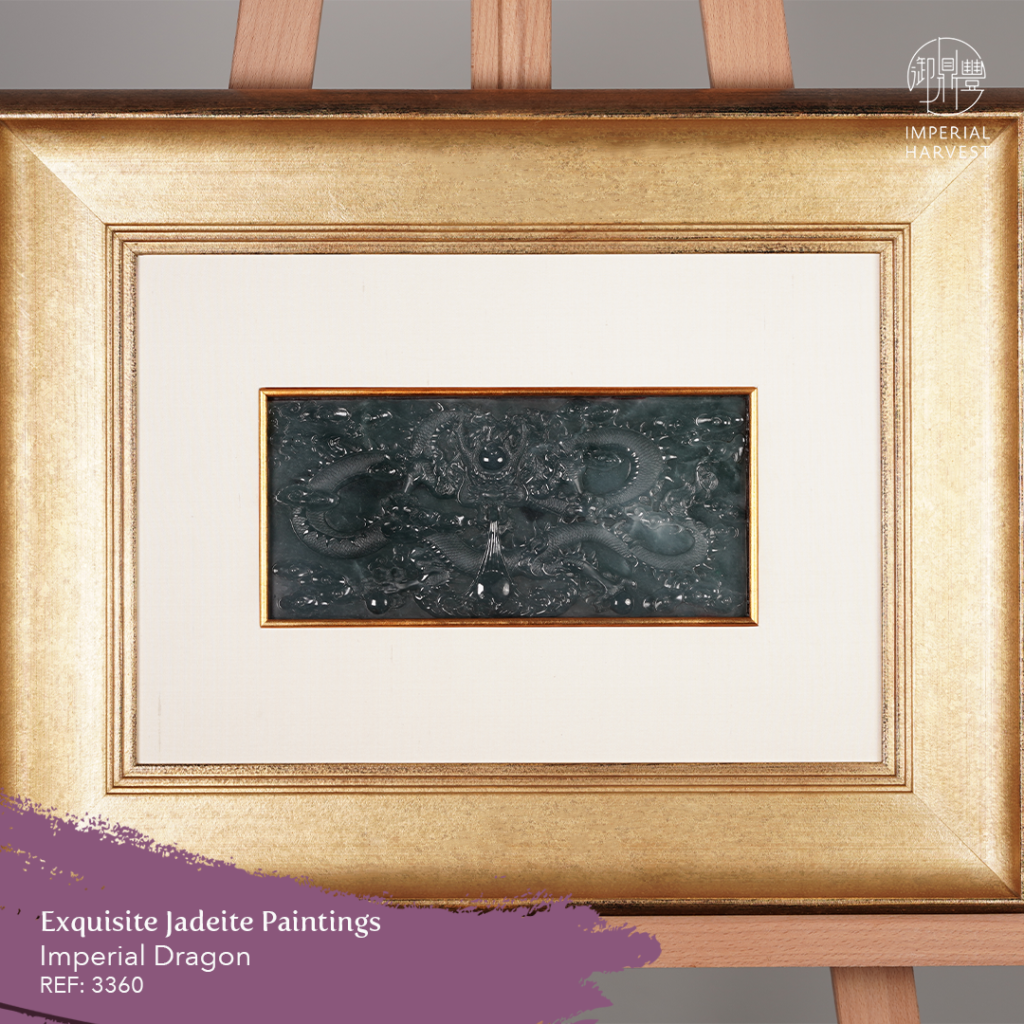 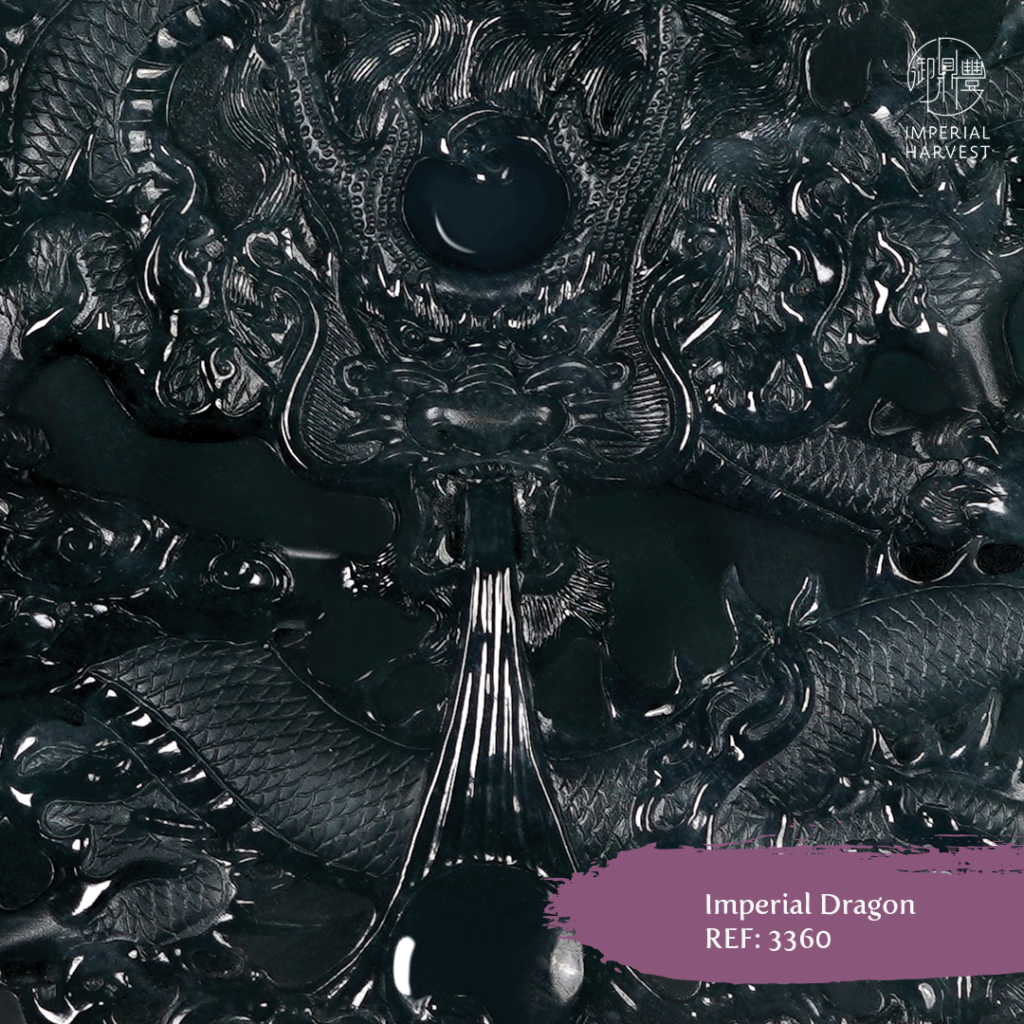 If you are an ambitious professional pursuing swift advancements in your career, the Imperial Dragon will help you attract recognition from your superiors and multiple job offers with significant pay increments.

Likewise, the Imperial Dragon has been a trusted partner to sales professionals throughout the years. Many of our blessed clients in the sales line can attest to the dragon’s ability to attract numerous organic referrals and uplift their charisma for the successful closing of high-ticket deals.

The Imperial Dragon’s powers in the human realm continue to manifest themselves for business owners, who will make short work of adding world-class talents to their teams. They will in turn help the company to generate multi-figure revenues, break a million-dollar valuation and accelerate business growth.

If you are an investor, the Imperial Dragon will help you earn a consistent return on your investments and allow you to expand your portfolio with confidence even in the most challenging of times. 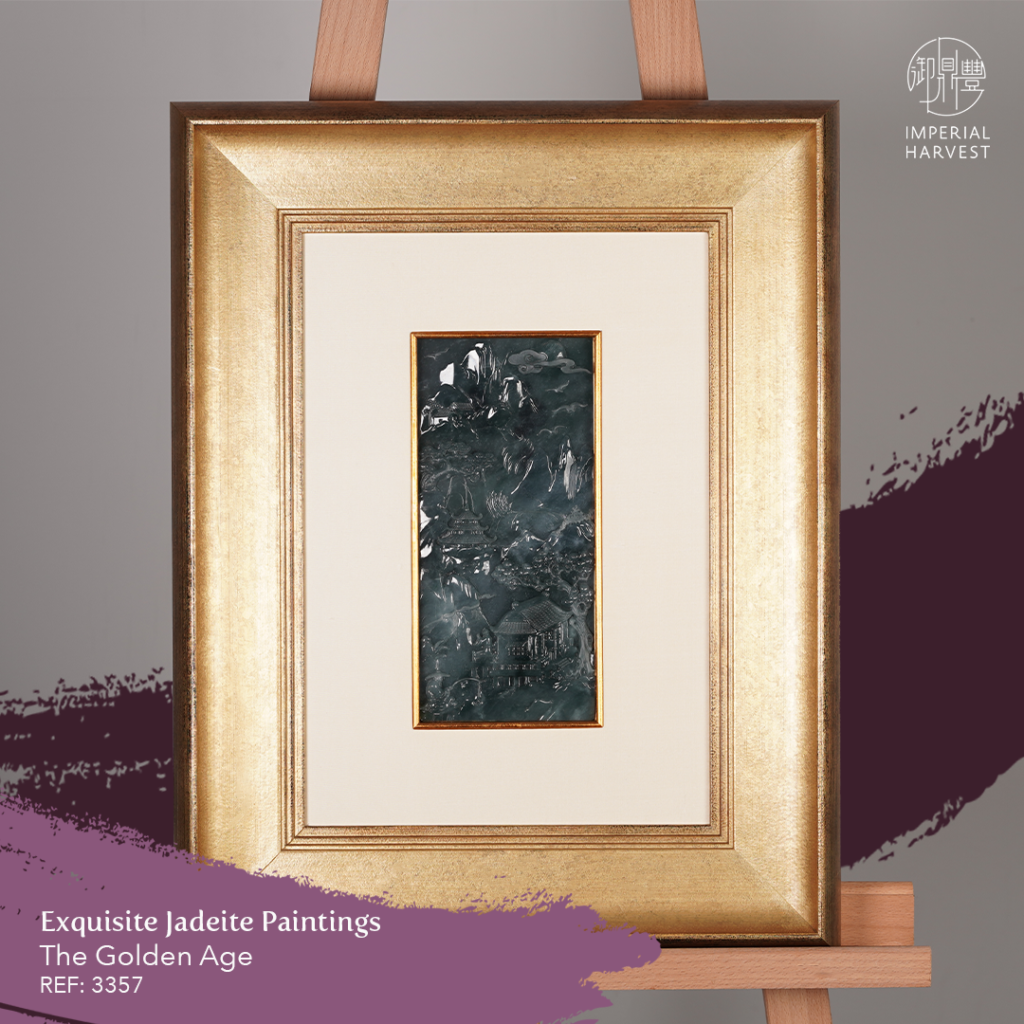 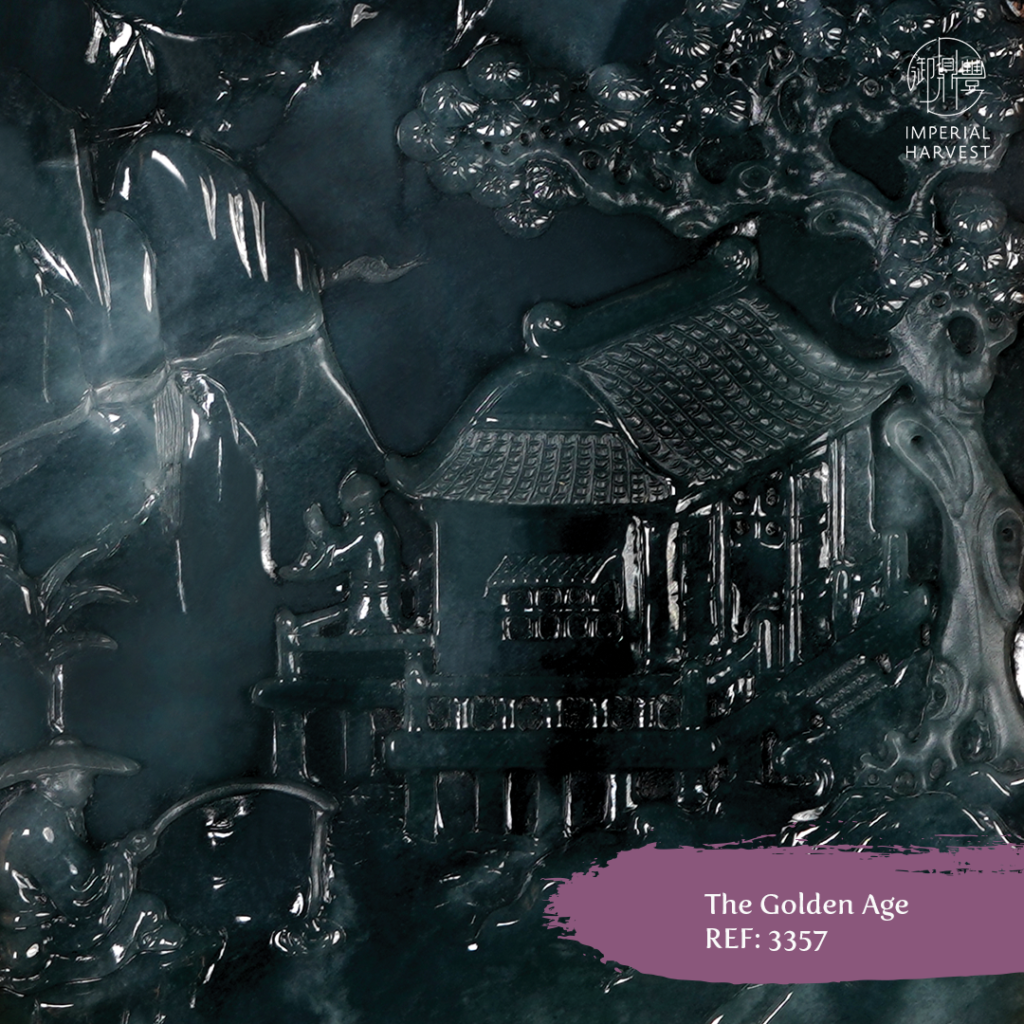 In Chinese, landscape is known as Shan Shui (山水), which literally translates to ‘mountain and water’. The former teems with resources and wildlife, while the latter is the artery of the ecosystem.

Seen as nature’s most important features, they co-exist harmoniously and offer balance to life. This concept is referenced in the Imperial Feng Shui principle “山管人丁，水管财” (“Mountains govern benefactors, authority and harmony, while Water governs wealth”).

Beyond conveying this notion, the Landscapes jadeite paintings are a window into the idyllic countryside of ancient China. Such striking sceneries, however, were highly unusual in ancient China as their innate complexity made them a challenging undertaking for even the most skilled artisans.

Those who were lucky enough to own it, like Emperor Qian Long and his scholars, used the sceneries not just as an auspicious balance to life, but also as an escape from the toils of daily routine. 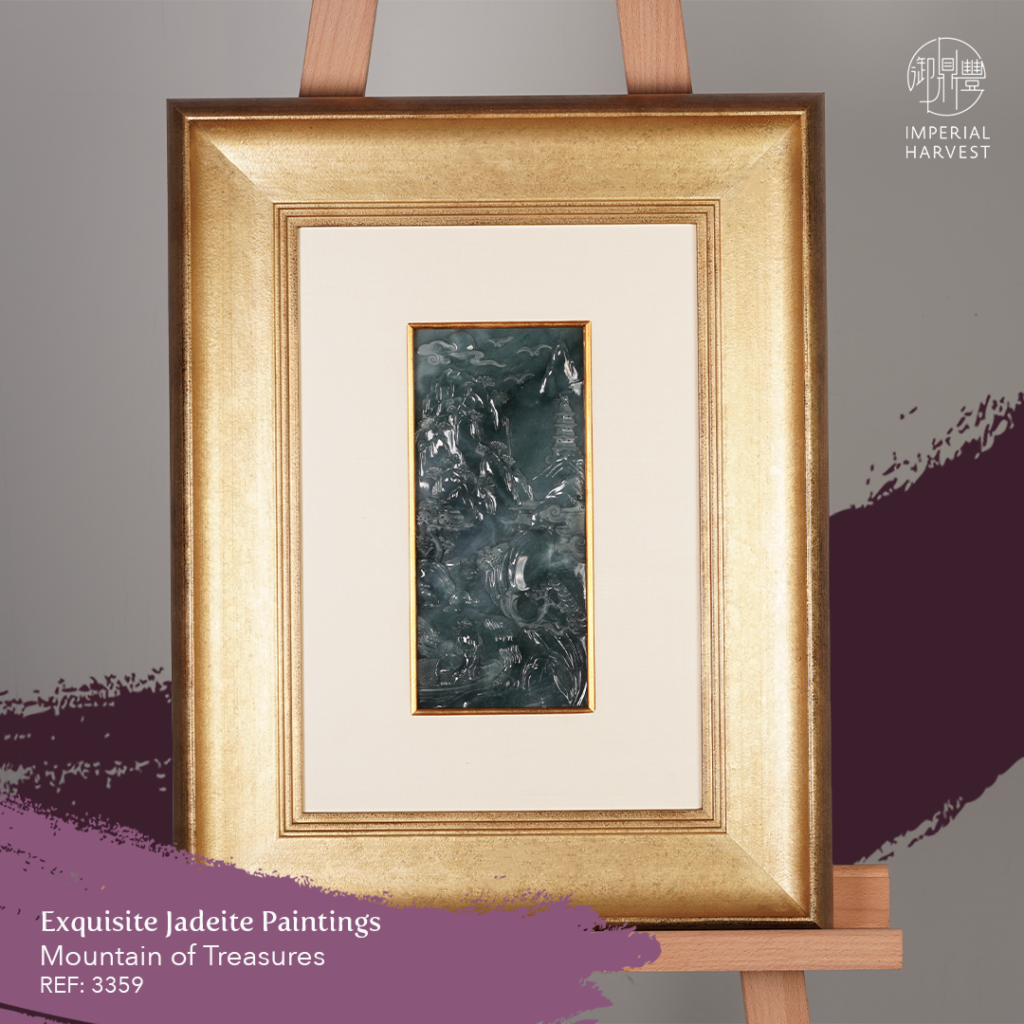 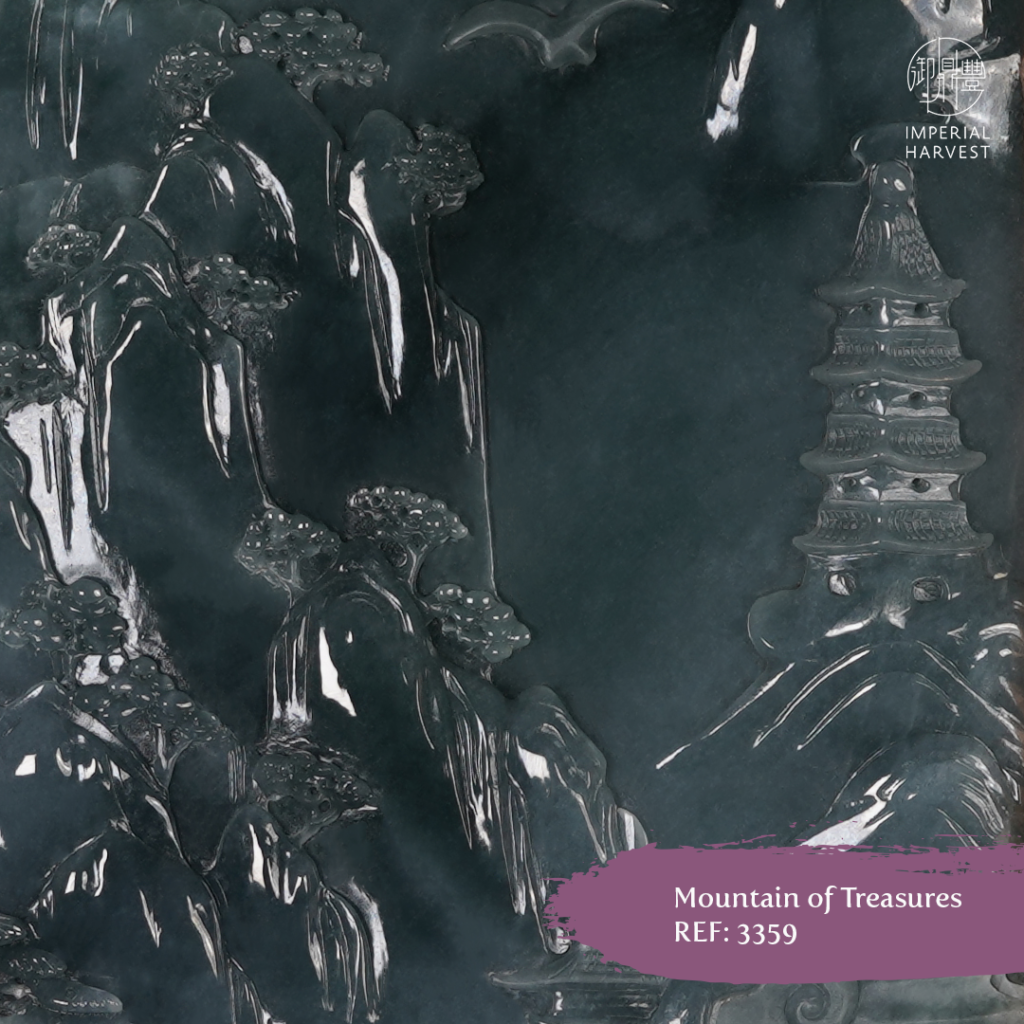 A pagoda is the destination in this vivid depiction of the journey of a city dweller. In Imperial Feng Shui, a pagoda is known as the ‘Education Tower’. Its conical roof is also characteristic of a wood mountain, one of the three auspicious elemental mountains – ideal for those seeking literary luck. For this reason, the pagoda was commonly patronised by officials who were about to sit for imperial tests.

Today, the pagoda is a symbol of scholastic success, enhancing concentration and mental capabilities for a better memory and higher accomplishments in examinations. It also brings extra vigilance and intelligence to the working mind, empowering professionals to advance in their careers and boosting their ability to later on create a fortune.

To get to the pagoda, however, the city dweller has to navigate a river that cuts through the foothills. In the study of Imperial Feng Shui, this auspicious feature is known as ‘逆水朝堂’, which translates to ‘water flowing towards your entrance’. This harmonious relationship between the mountain and the water is responsible for ushering in wealth, abundance and prosperity.