According to the theory of Yin and Yang, everything that exists is composed of two opposing forces; neither can live without the other, so attaining a balance between the two is the key to achieving prosperity, success and harmony.

Likewise, there are two groups of stars in Imperial Feng Shui, namely Mountain Star and Water Star. “山管人丁，水管财” (“Mountains govern benefactors, authority and harmony while Water governs wealth, opportunities and intuition.”) is one of the most important verses in the classics of Imperial Feng Shui which echoes this principle.

Learn more about the Importance of the Mountain Star here

In this article, we will explain the importance of the Water Star in Imperial Feng Shui.

In the context of Yin Feng Shui, Imperial Feng Shui masters tapped on the auspicious benefactor energy from the mountains to safeguard the authority and well-being of the future generations of the royal family.

In the application of Yang Feng Shui, many ancient empires built their civilisations near auspicious river formations to usher in wealth and prosperity. However, these solutions have proven impractical in many circumstances as ancient rulers found themselves defenseless against the brute force and unpredictability of Mother Nature.

As one of the most prominent advocates of Imperial Feng Shui, Emperor Qian Long’s relentless pursuit of Imperial Feng Shui development has led to several groundbreaking solutions to overcome the aforementioned challenges. These include the Qian Long Jadeite Mountain and Imperial Harvest-grade Crystals.

The Water Star is present in our living and working environments and plays a pivotal role in governing wealth, opportunities and intuition. As a capable ruler, Emperor Qian Long understood the importance of activating the Water Star. Hence, he advocated the use of Imperial Harvest-grade Crystals to catalyse the growth of wealth and prosperity. As a result, the Qing dynasty was able to achieve robust economic development, consistent agricultural yield, social peace and stability.

In short, when you incorporate Imperial Feng Shui solutions into your living or work space, you are laying the foundation for your financial success.

The Imperial Harvest Crystal collection is the continuation of the Imperial Feng Shui tradition from the Qing Dynasty, where internally flawless and impeccably designed crystals are deployed to activate the auspicious Water Stars.

The Bamboo of Successive Blossom is a brand-new collection envisioned and conceptualised by Master David Goh to promote career advancement, rapid growth and breakthroughs, strength and resilience to overcome challenges. 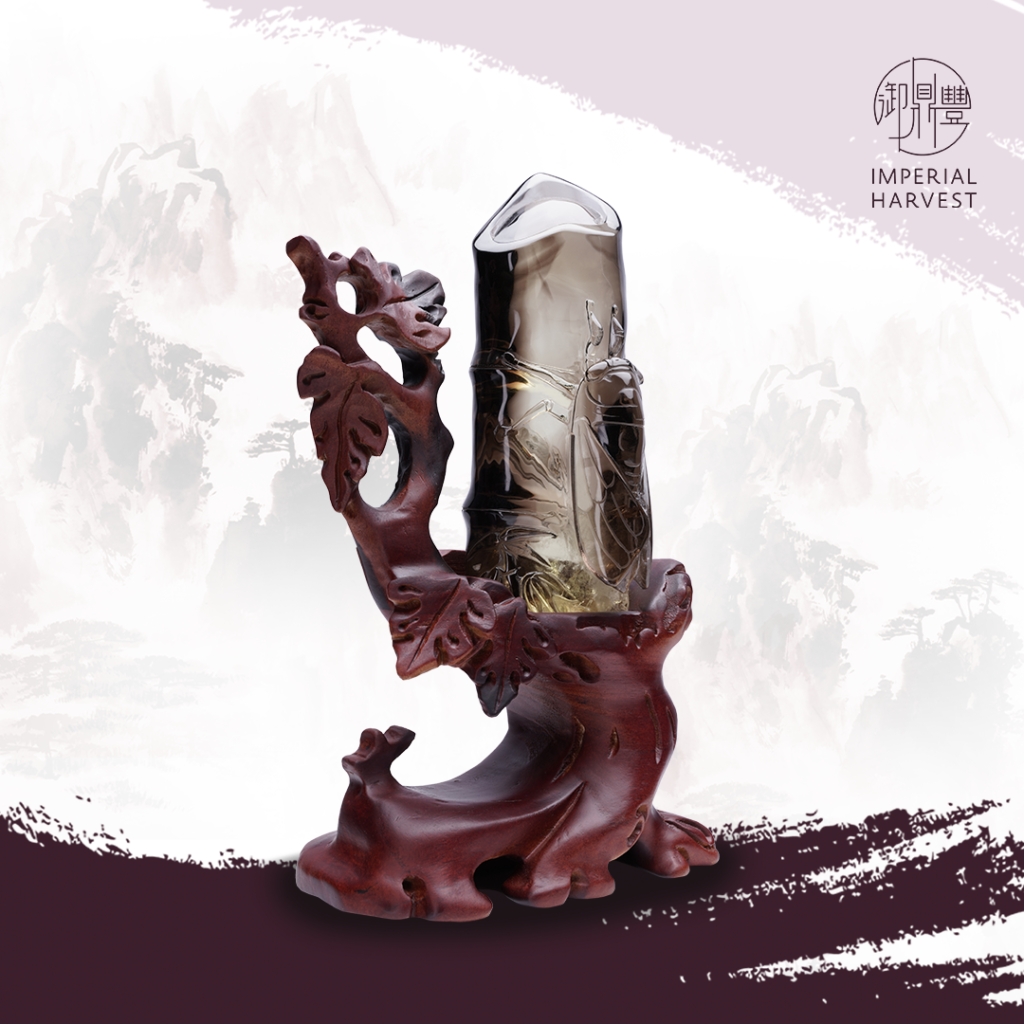 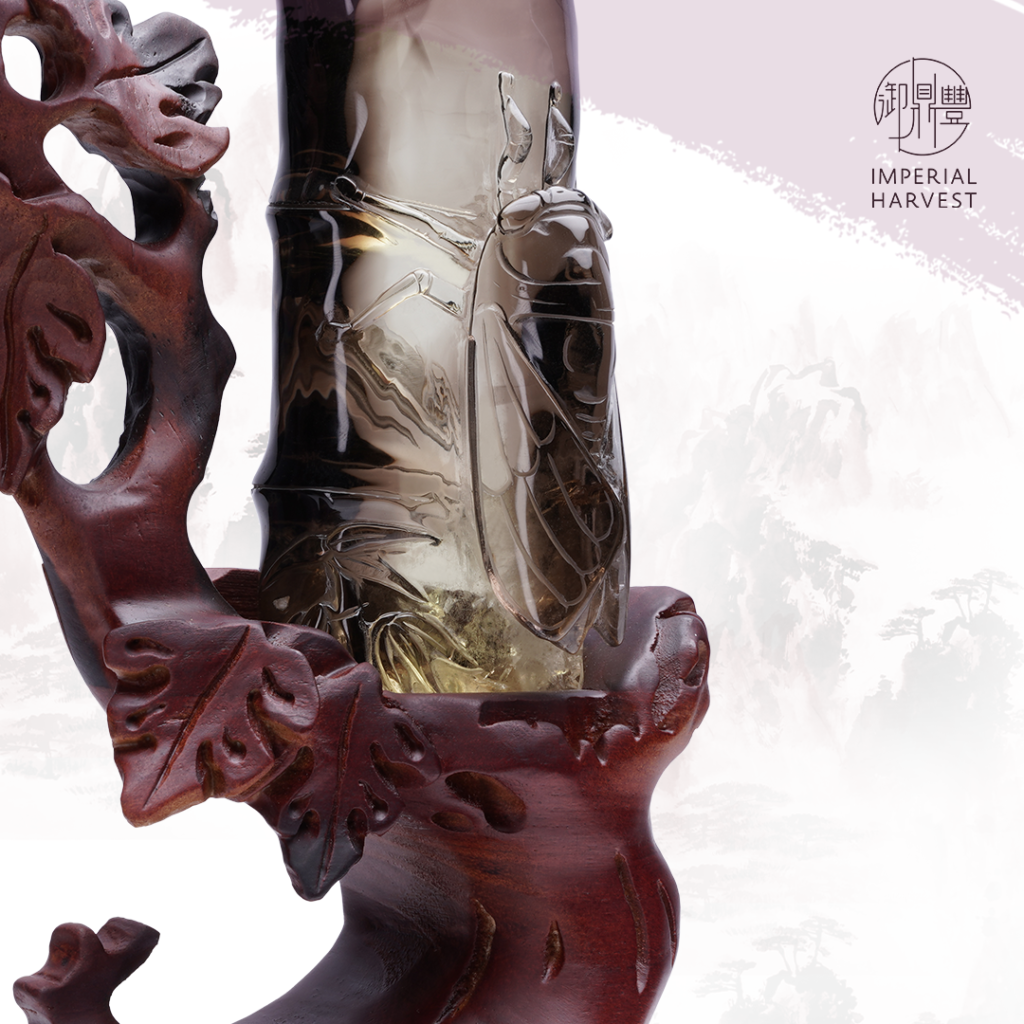 Master David Goh summarised the merits of bamboo according to its characteristics: its deep root denotes solid foundation of success, successive stems represents lasting victories, its interior modesty, and its clean exterior exemplifies honour and reputation. 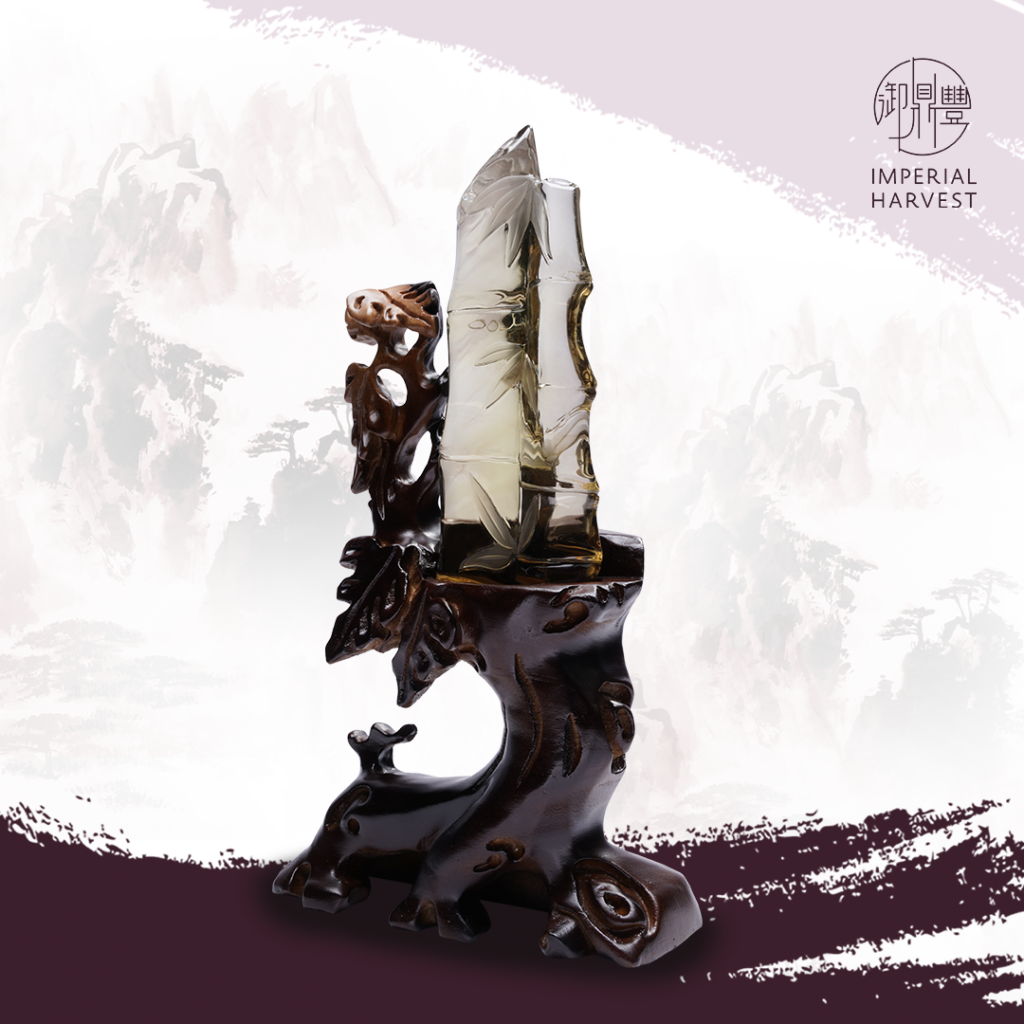 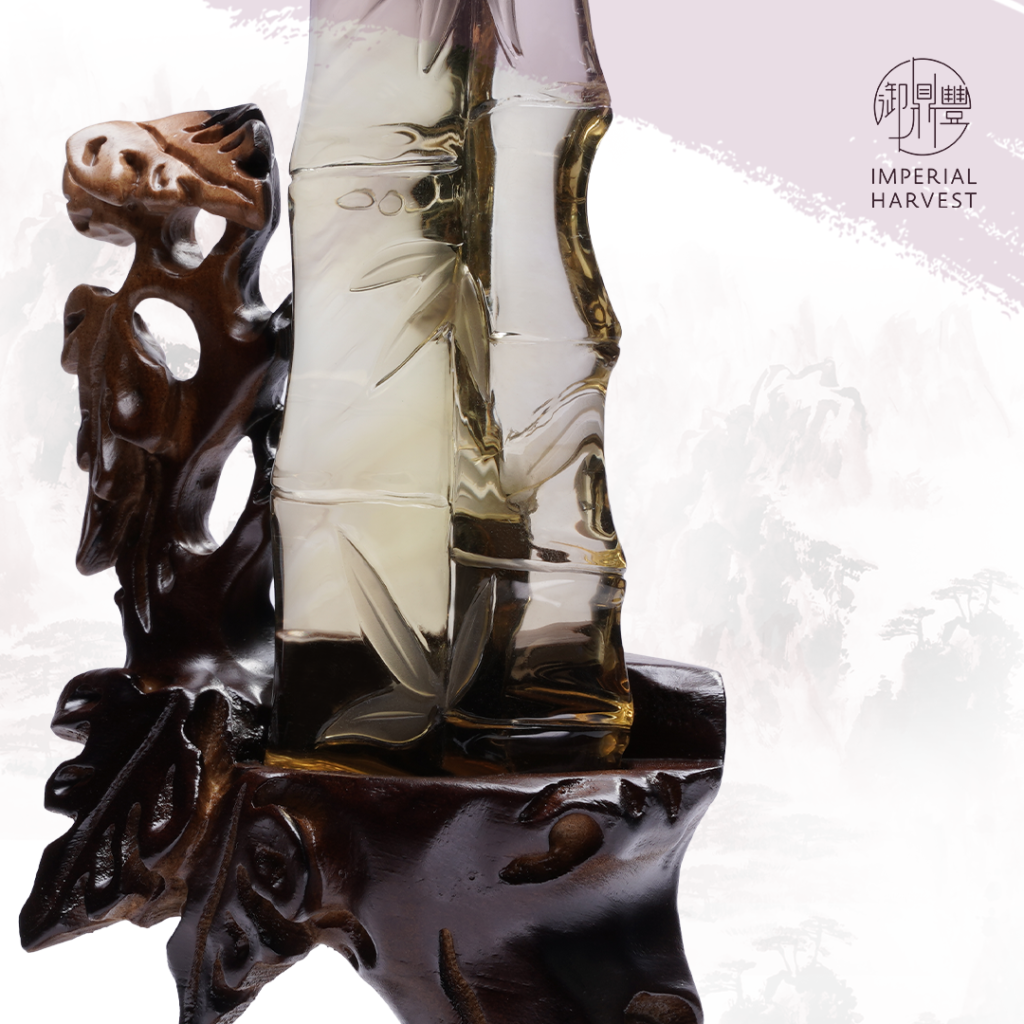 The Bamboo of Successive Blossom collection plays an influential role in encouraging people to thrive and succeed regardless of economic climates and circumstances.

Known for his cheerful disposition, Laughing Buddha is the bearer of good luck, benefactor and happiness. 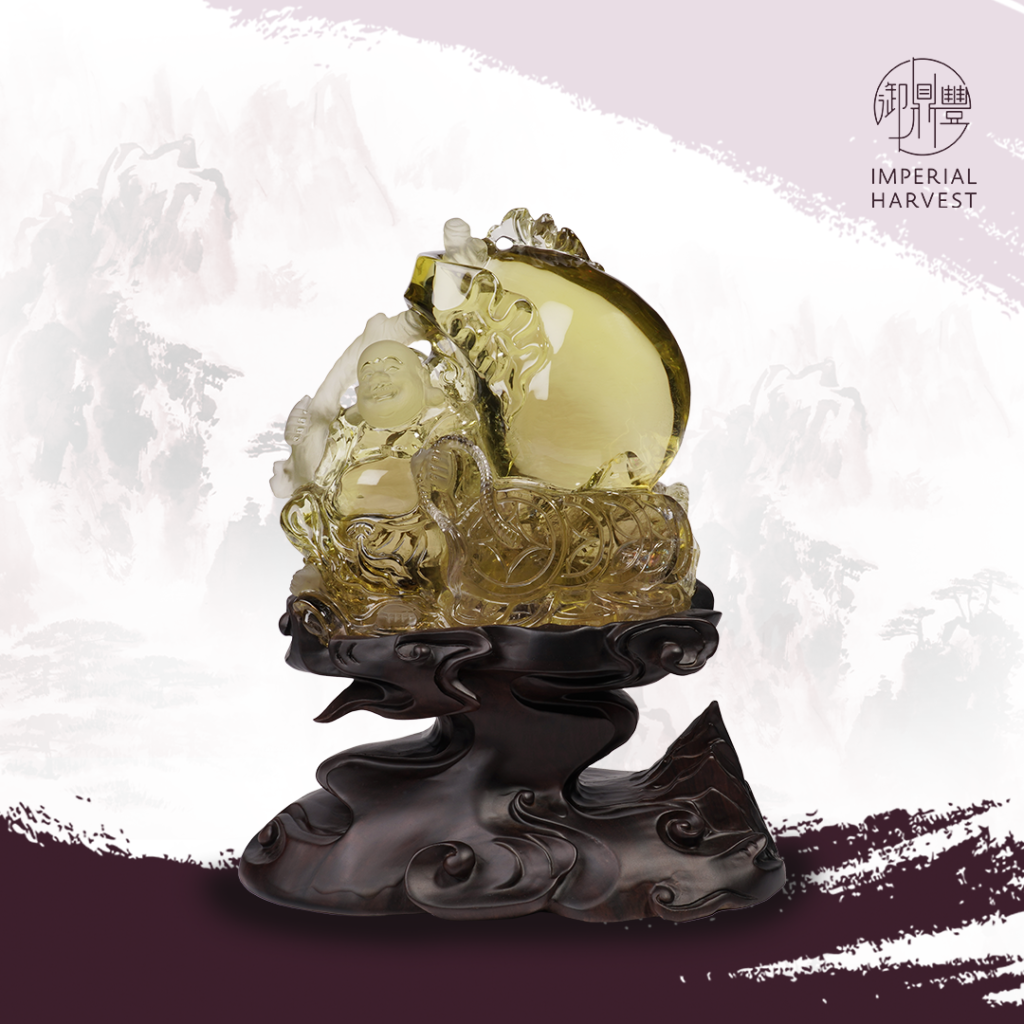 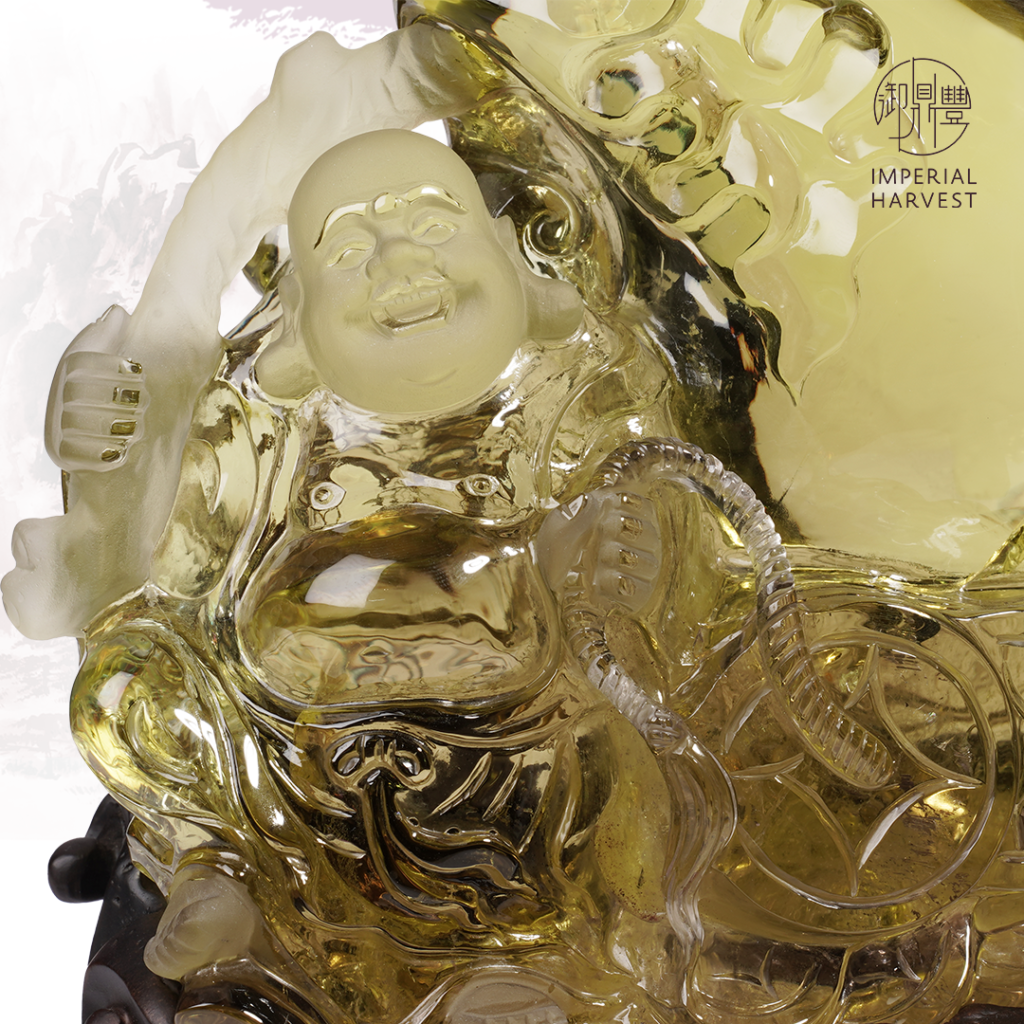 Each Imperial Harvest Crystal Laughing Buddha is designed with a plethora of auspicious emblems: gold ingot, ruyi scepter, treasure bag and calabash to unlock and unleash the unlimited potential of our blessed clients. 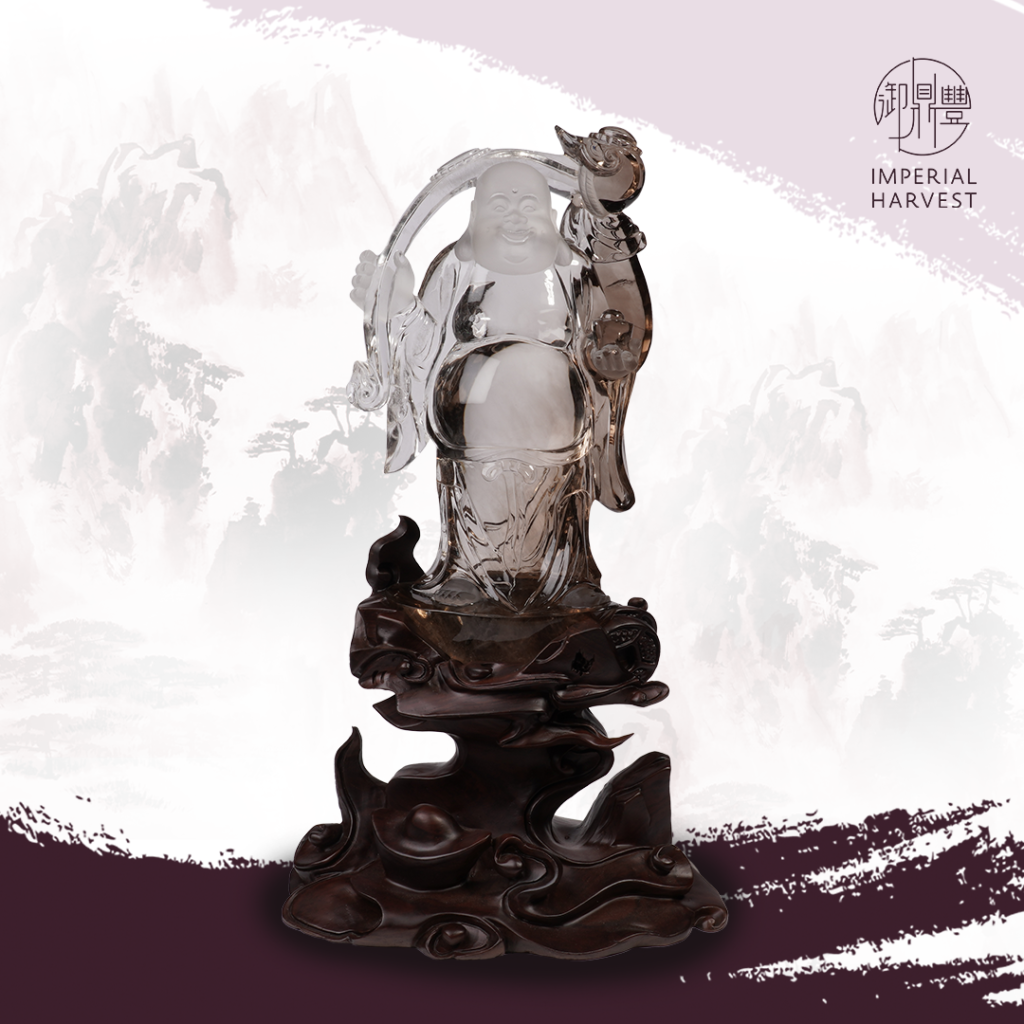 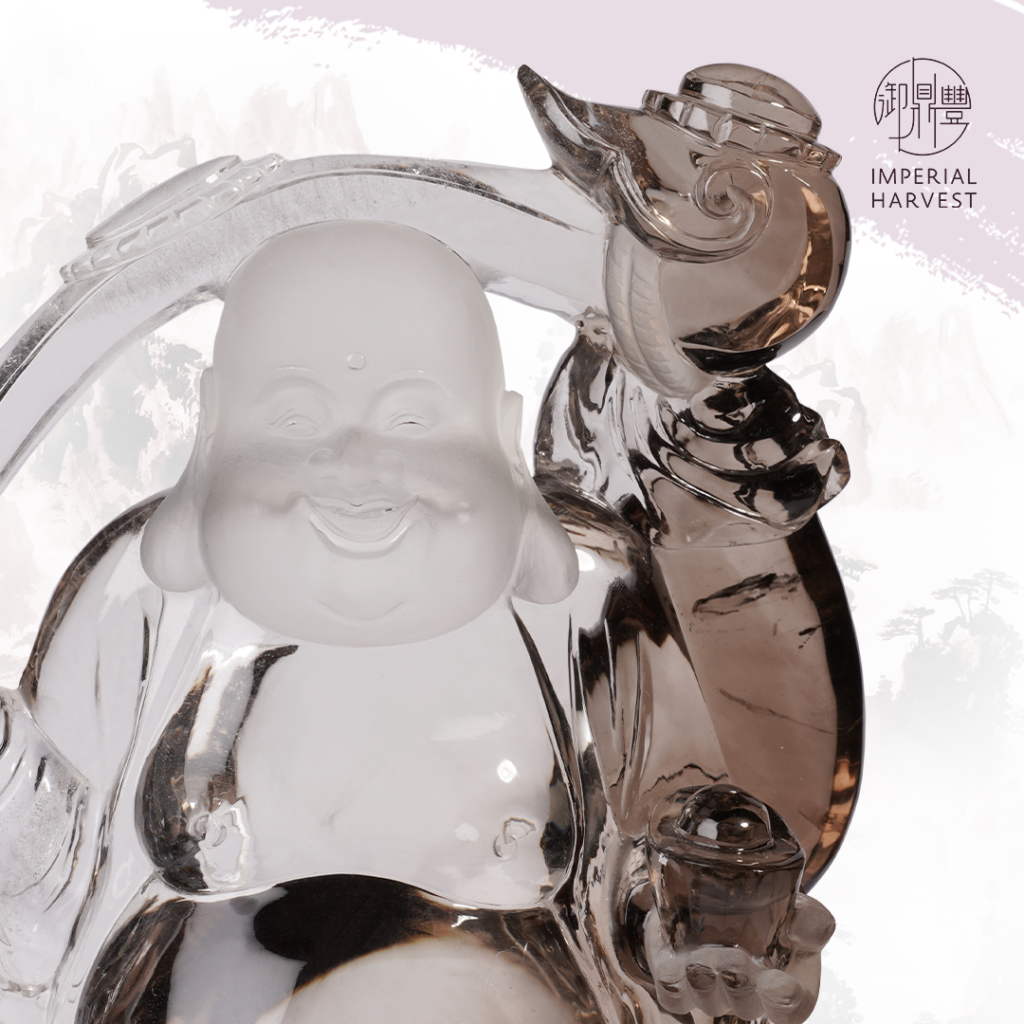 Since its inception, the collection has been a firm favourite among many Imperial Harvest clients. 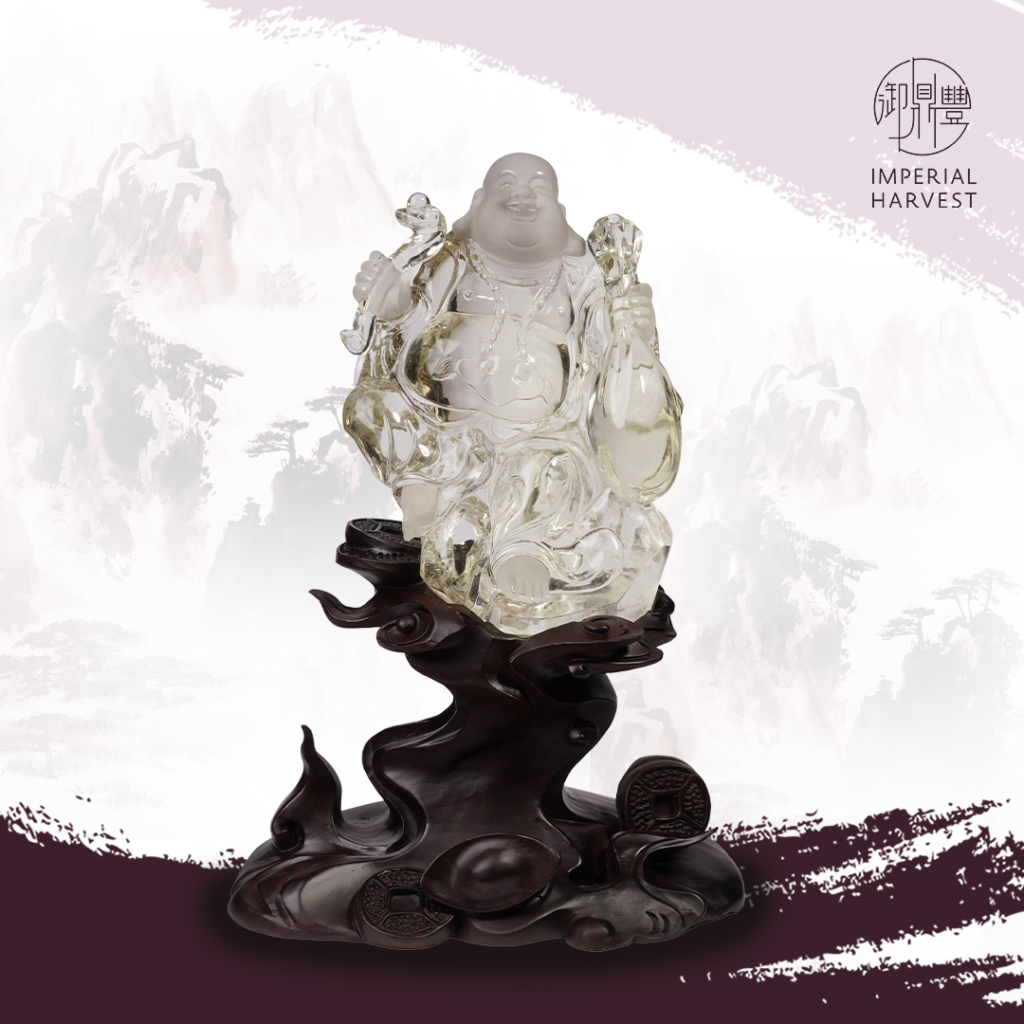 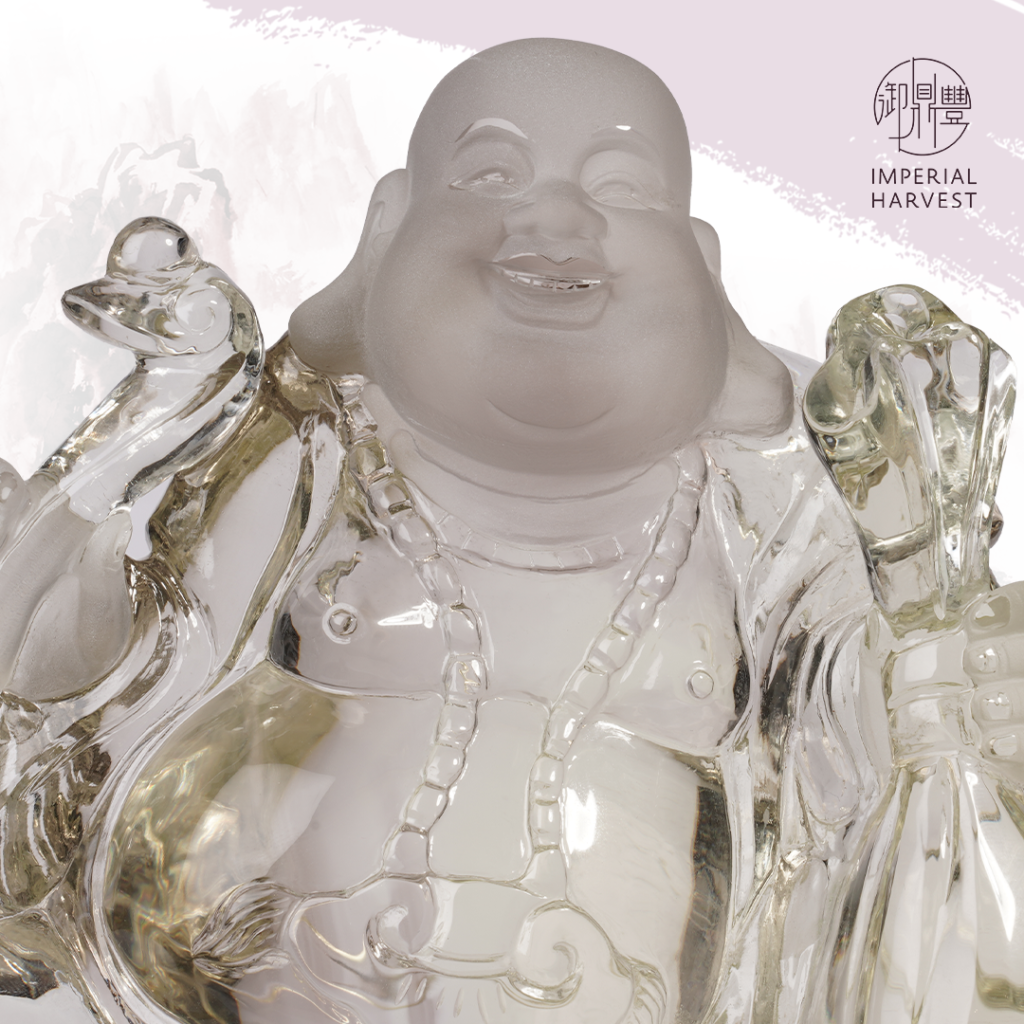 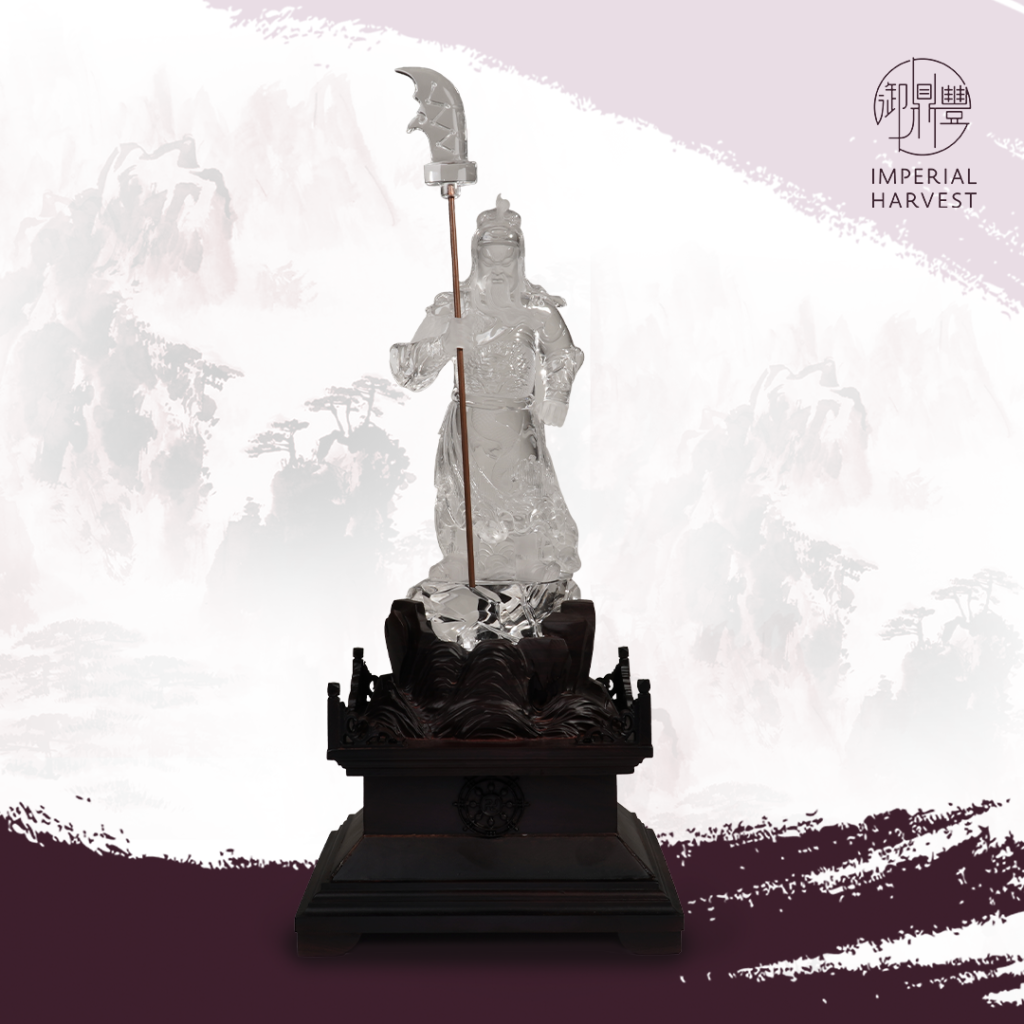 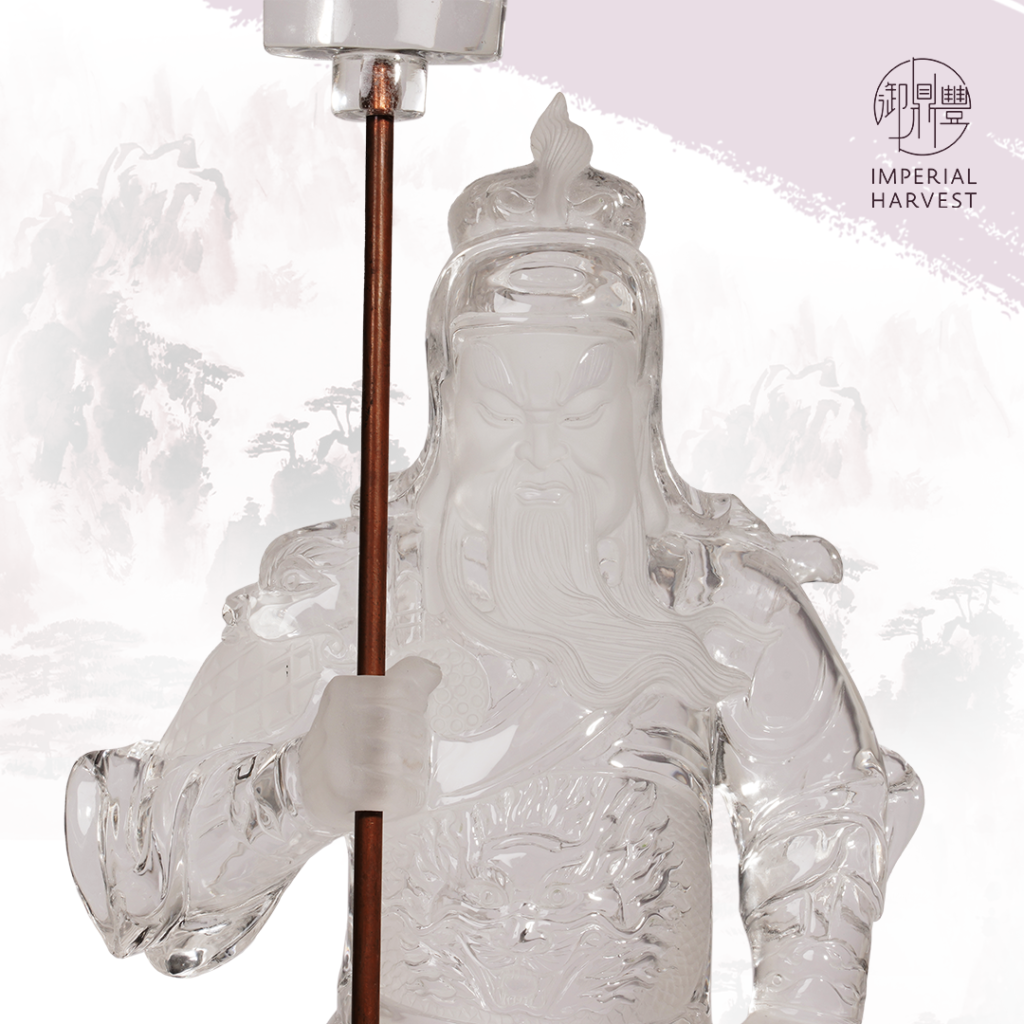 A champion in religious diversity, Master David Goh draws design inspiration from his decade-long study of Buddhism, Hinduism and Taoism, culminating in the most iconic and emblematic crystal collection. 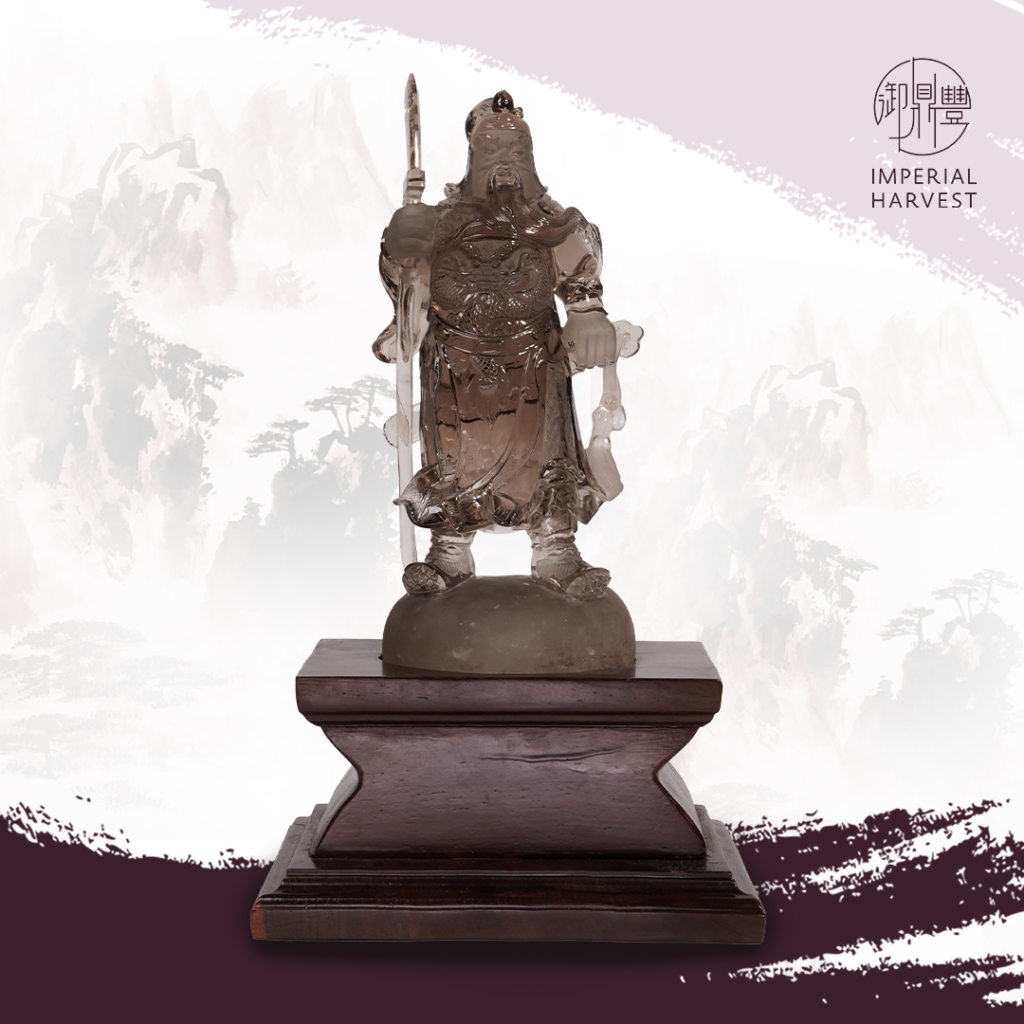 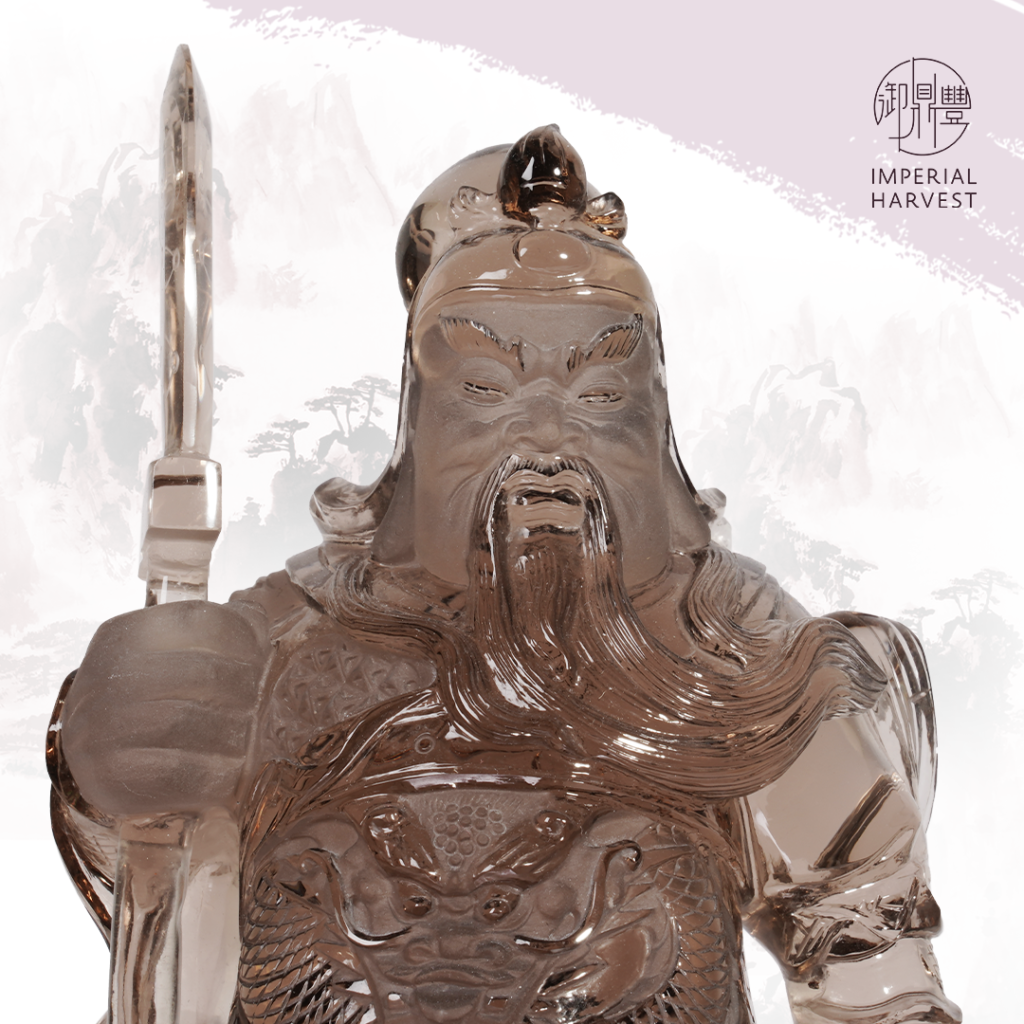 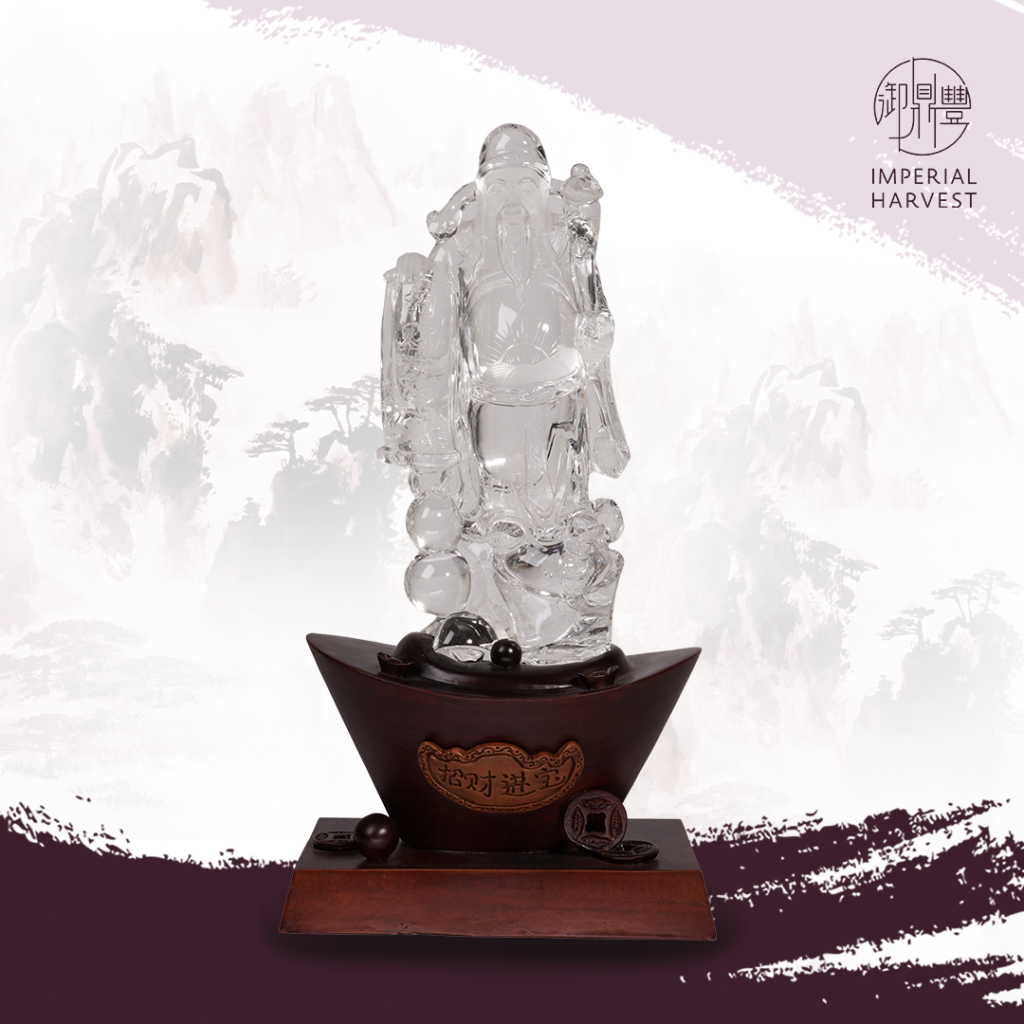 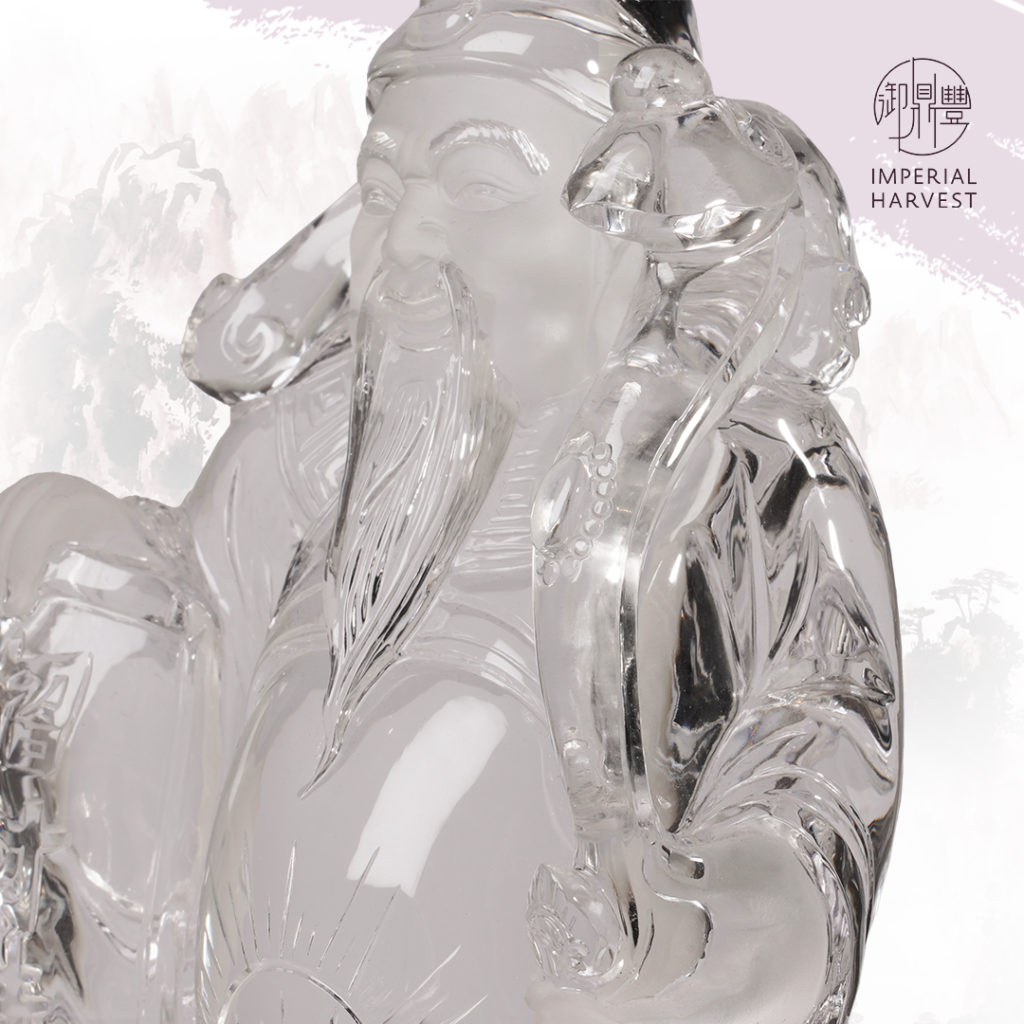 Legendary Creatures features some of the most iconic creatures from the Oriental culture. 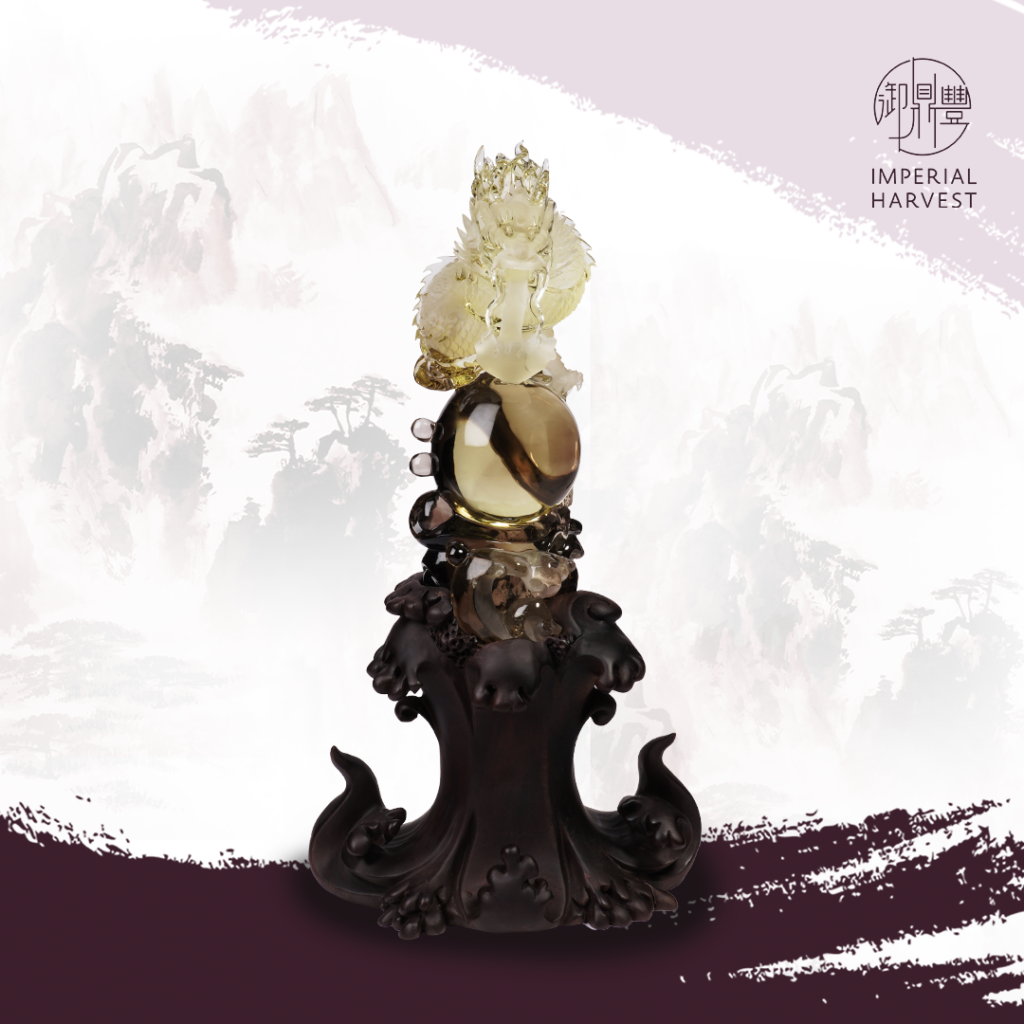 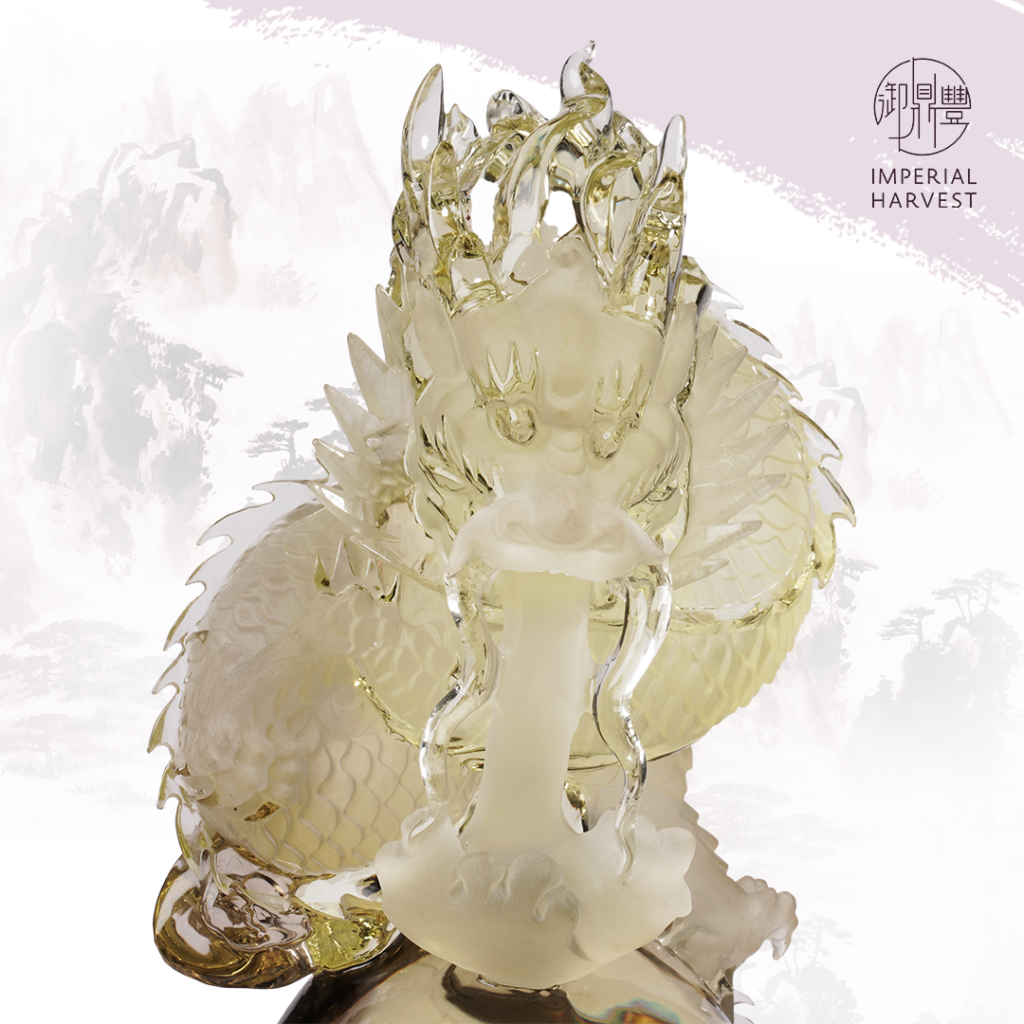 Imperial Dragon is a symbol of dominance, success and prosperity.

Hand-carved out of a single block of rare citrine quartz, the Imperial Dragon crystal requires one year of hand-carving, fine hand-finishing and multi-facet polishing to meet the uncompromising standards laid out by Master David Goh. 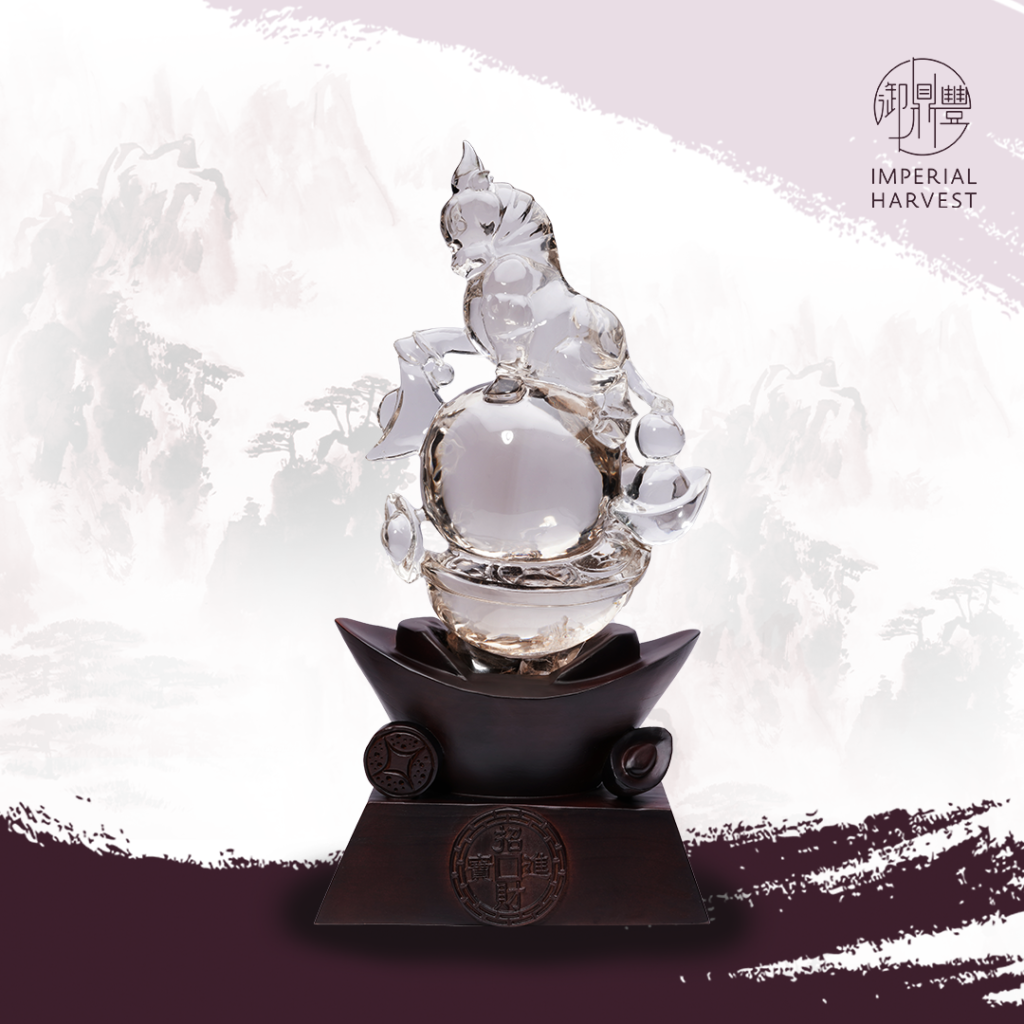 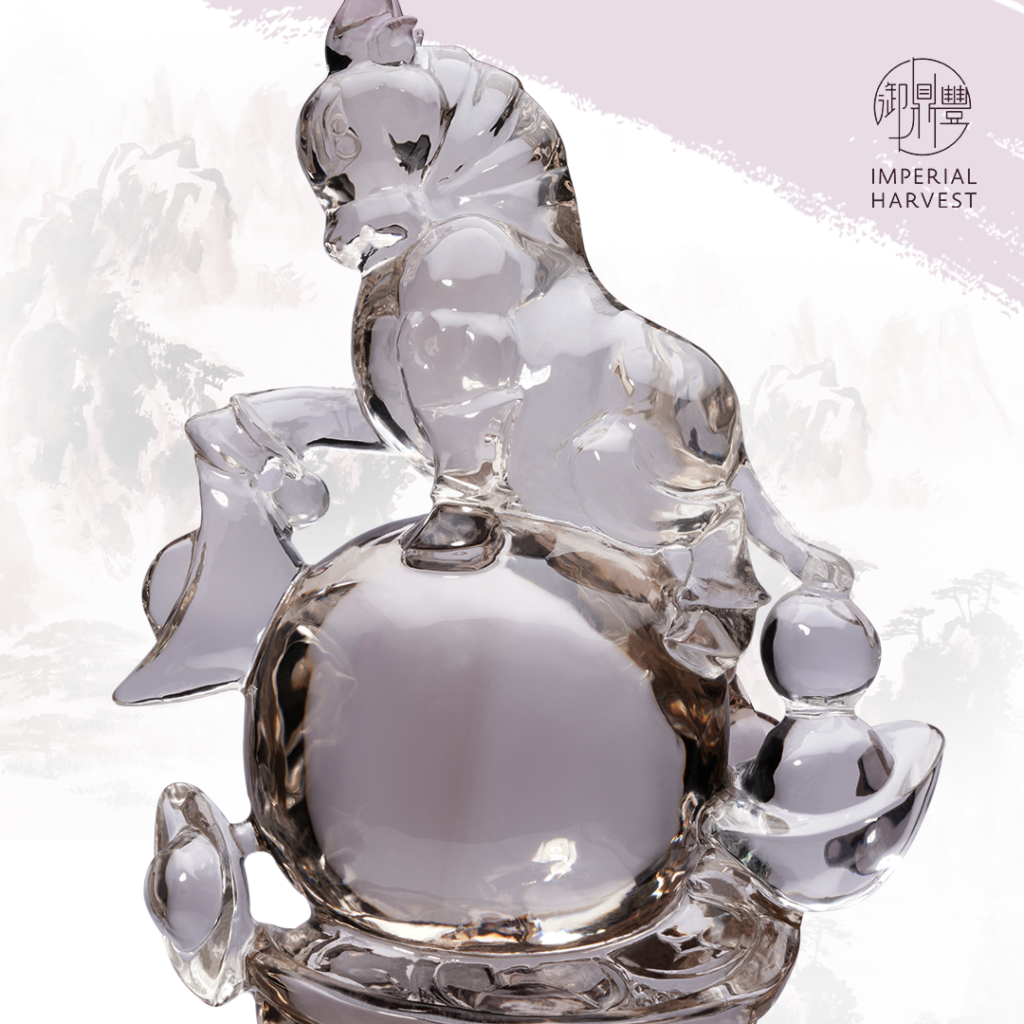 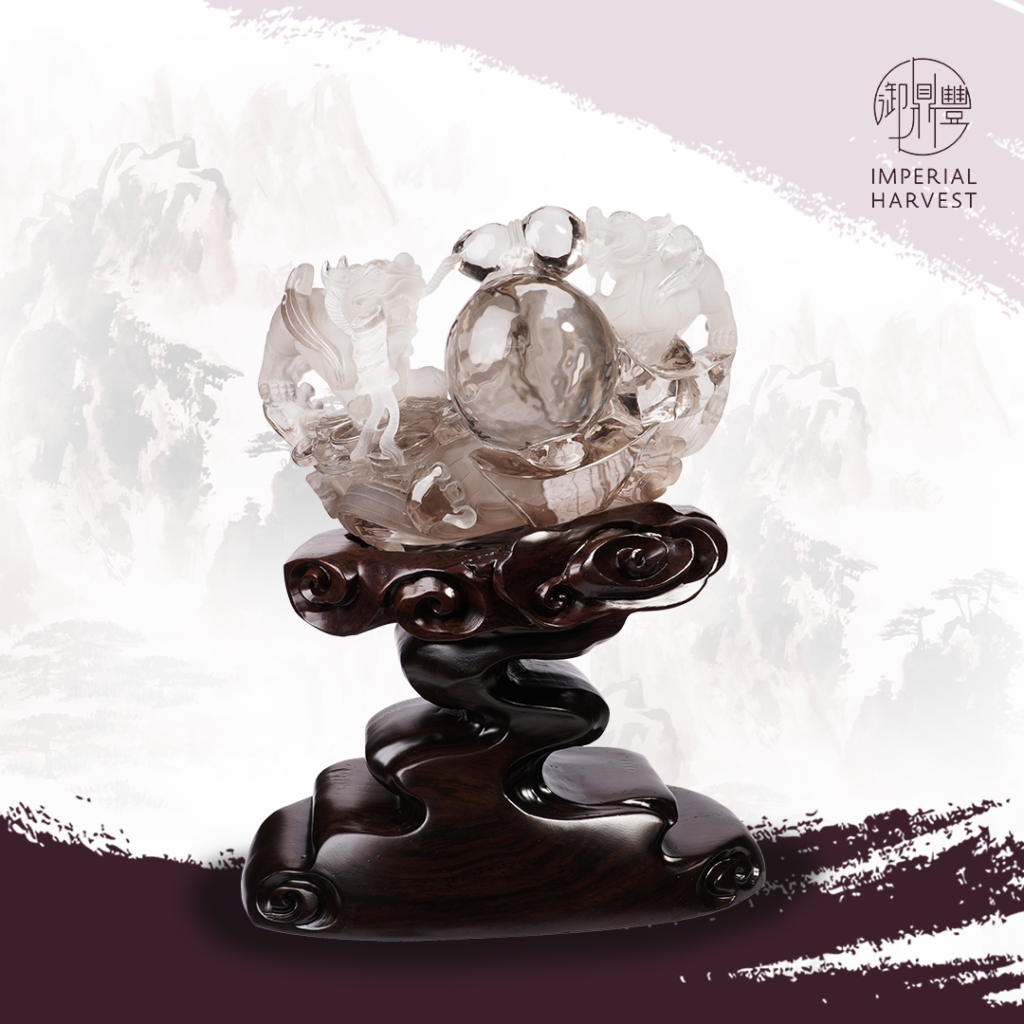 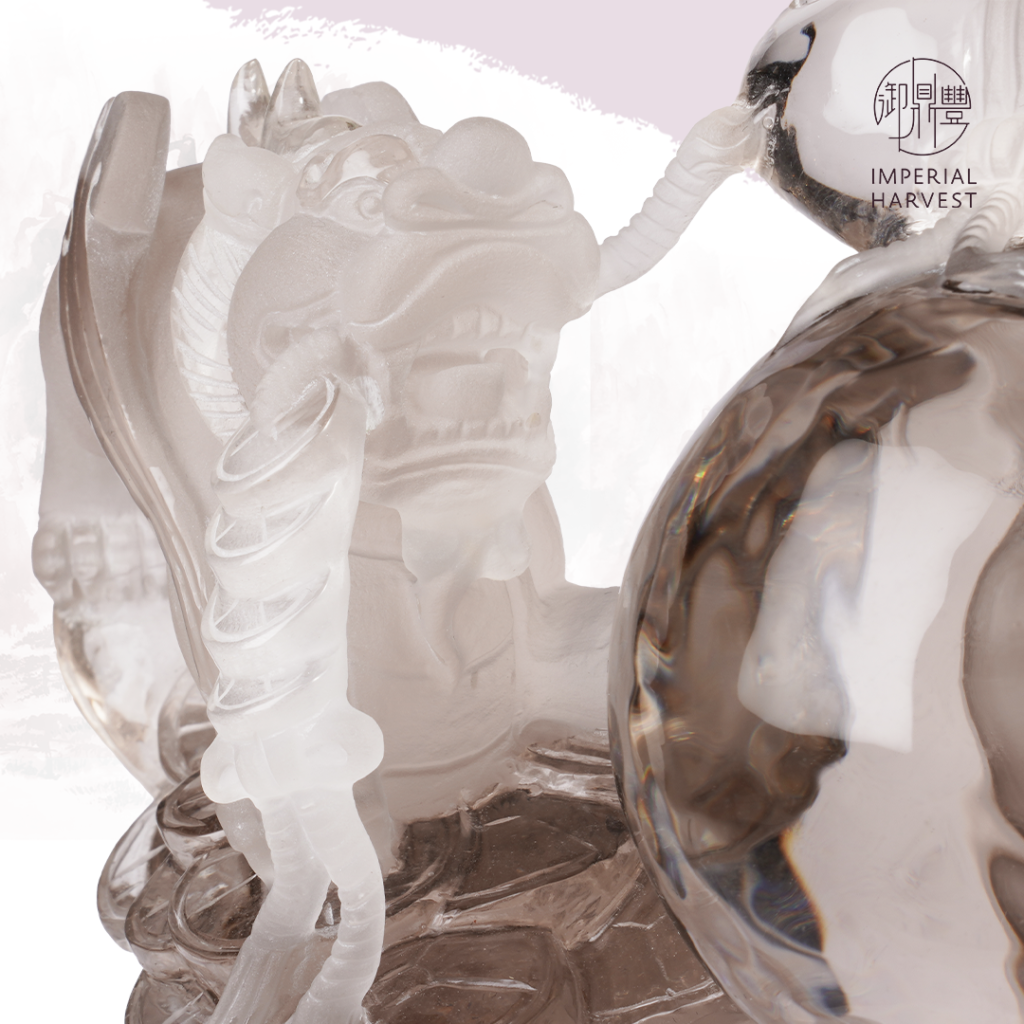 Our Promise of Quality 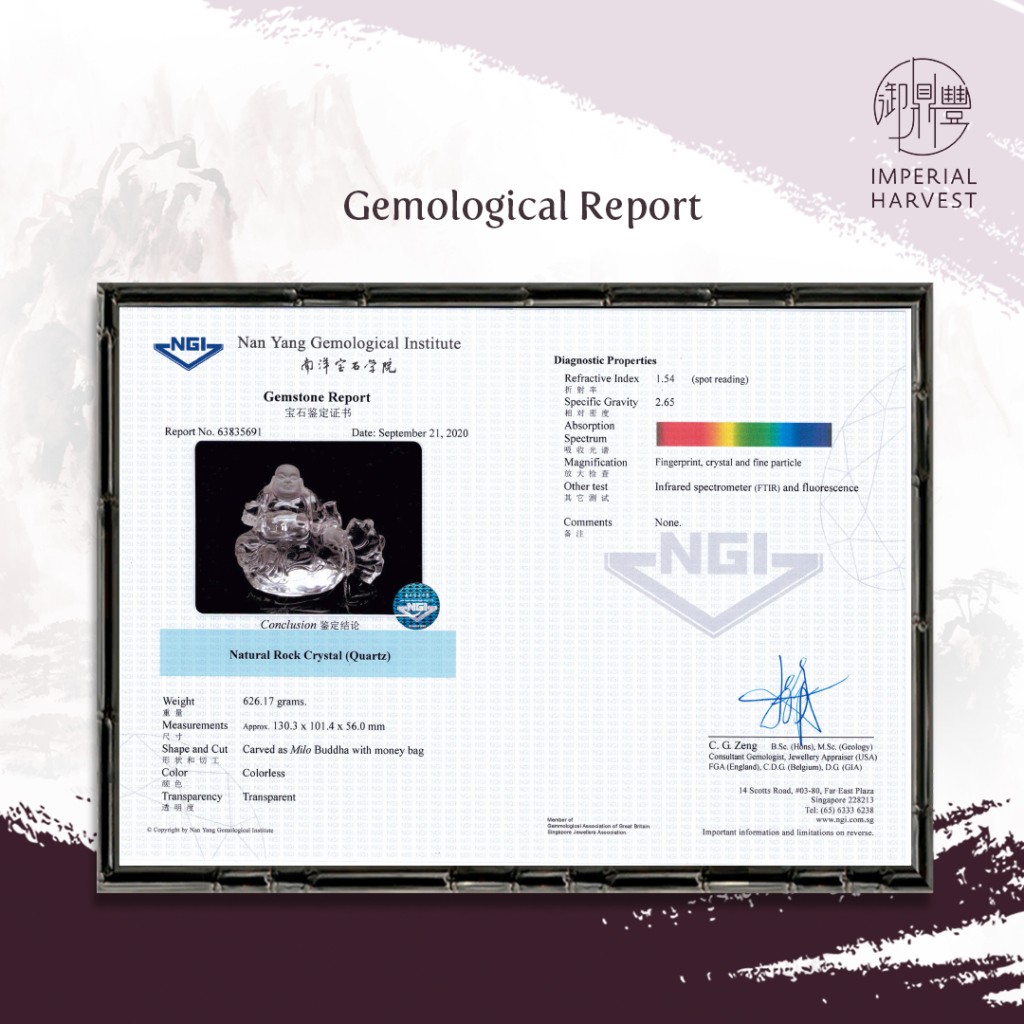 Every Imperial Harvest crystal comes with an independent gemstone certification issued by the Nanyang Gemological Institute based in Singapore.