Posted by Imperial Harvest on 12 August 2022

Marking a period of great significance in Imperial Feng Shui, the seventh lunar month ushers in an auspicious season of indirect wealth.

This season brings auspicious opportunities to supercharge your indirect wealth — the sphere of wealth that encompasses the income individuals are able to attain from their stock investments, trading profiles and other supplementary sources of income. For example, a full-time property agent who also invests in stocks would derive their indirect wealth from their investments.

Building a strong and diverse financial portfolio is paramount, particularly during a turbulent and ever-changing economy. As such, a common source of indirect wealth is financial investments. With enhanced indirect wealth luck, individuals can achieve consistent growth in their portfolios and accumulation of wealth, despite unstable financial conditions.

Indirect wealth could also stem from windfalls. This refers to the unanticipated or infrequent wealth acquired from an inheritance or timely trading decisions. These windfalls enable individuals to effectively leverage up-and-coming opportunities to best benefit themselves, making this factor an essential one in attracting and manifesting wealth across a myriad of financial endeavours.

Activating the indirect wealth sector in homes and offices is paramount for its occupants to maximise their wealth capacities, empowering them in their financial pursuits and fostering abundance and prosperity.

The water star — also known as the wealth star — is present in our living and working environments, playing a prominent role in governing an individual’s wealth, opportunities and intuition. Based on rigorous research conducted by the eminent Imperial Feng Shui masters appointed by Emperor Qian Long, it was unveiled that indirect wealth sectors within any home or workspace could be activated with the proper installation of fine, natural Imperial Harvest-grade crystals. 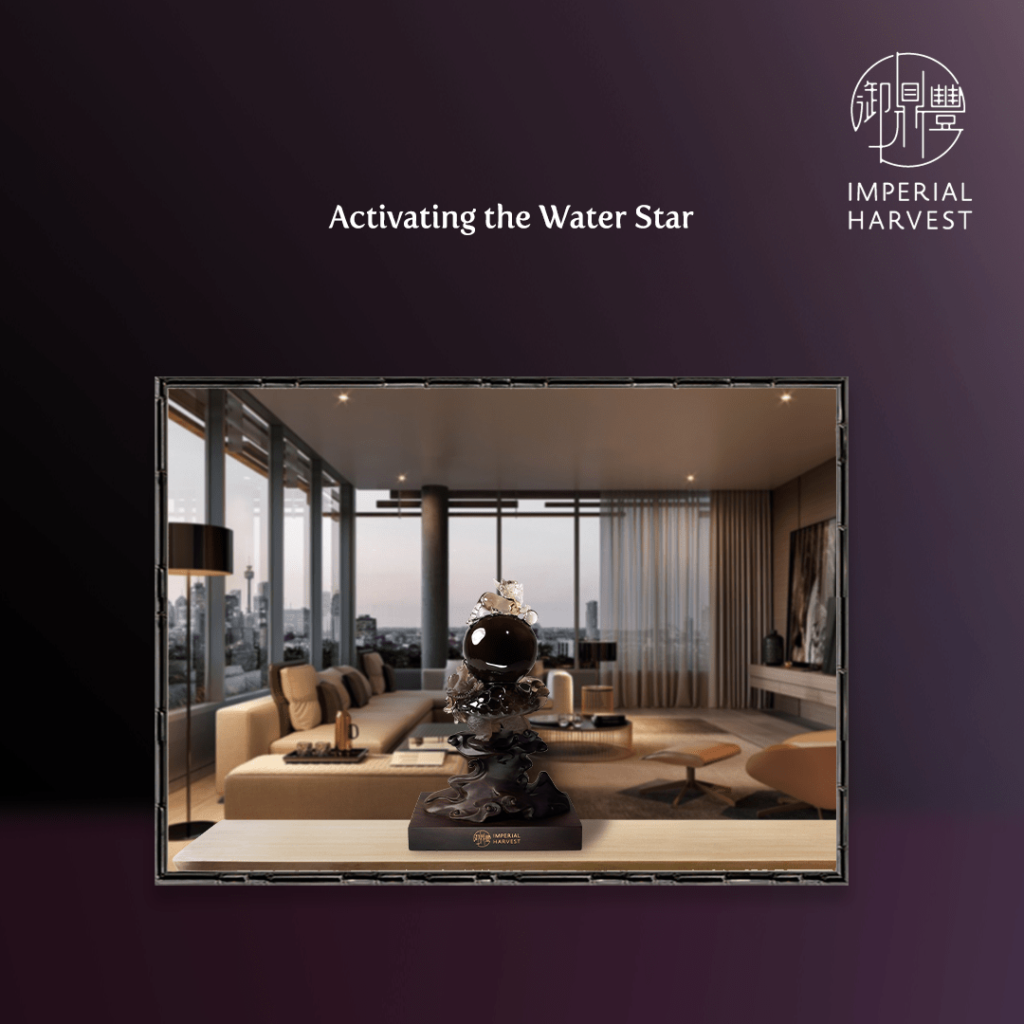 Based on Imperial Feng Shui principles, Imperial Harvest’s blessed clients are able to activate the water star in their living or work spaces with the world’s finest crystals – the same grade of crystals used by Emperor Qian Long himself. The Imperial Harvest Crystal collection is a contemporary embodiment of the Imperial Feng Shui tradition that flourished in the Qing Dynasty. It empowers our blessed clients to attain their financial goals and destinies, by ushering boundless wealth and prosperity into their homes and offices.

Meticulously designed by Master David, the Imperial Harvest Crystal Collection incorporates wealth-enhancing features of auspicious deities and creatures to bring its destined owner an abundance of wealth and prosperity. Imperial Harvest works directly with only the most reputable mines to curate the finest natural crystals for our blessed clients. 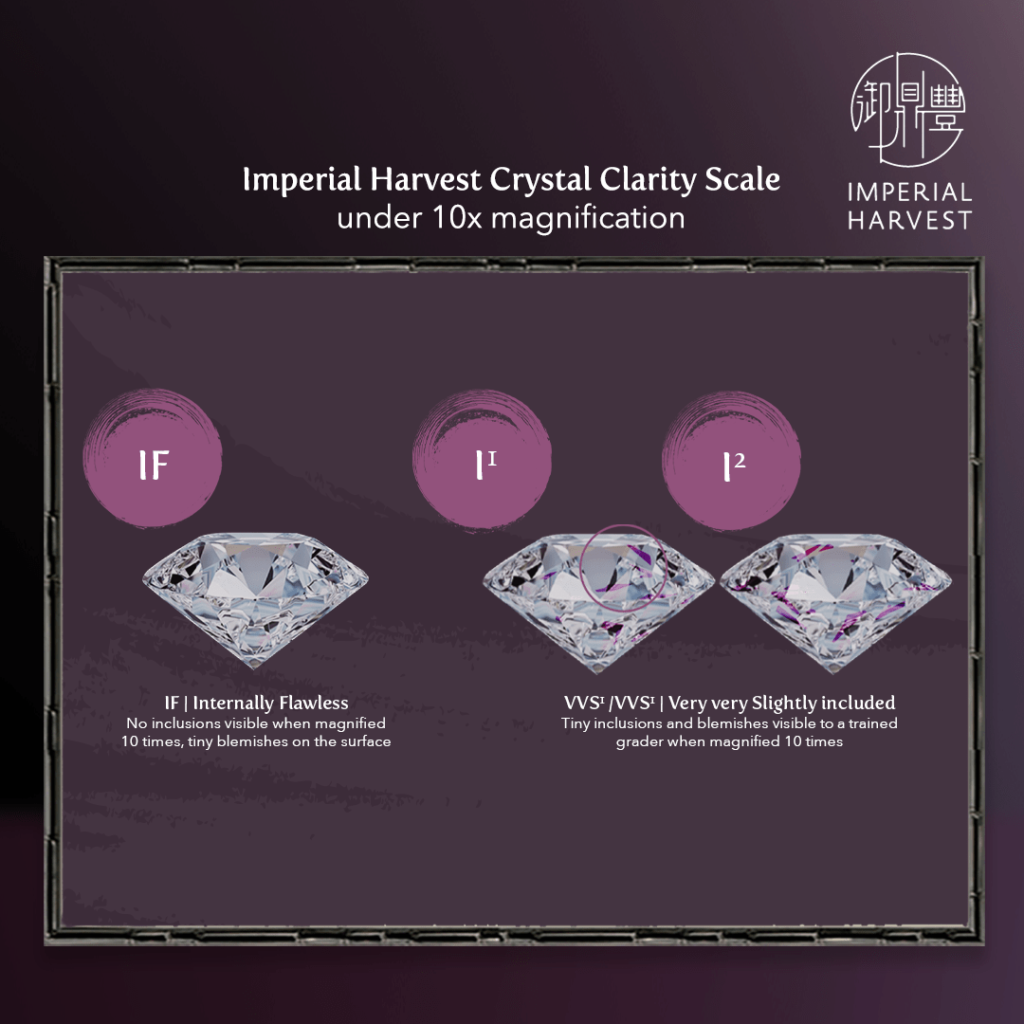 Imperial Harvest-grade crystals are of impeccable quality, possessing a similar clarity and quality as those that once composed Emperor Qian Long’s extensive collection. In Imperial Feng Shui, the clarity of the crystal has a direct impact on the speed at which prosperity is achieved, and wealth grows.

Consisting of only the world’s finest natural crystals, the Imperial Harvest Crystal collection is free from artificial heat or colour treatments. Spanning a range of colours, some Imperial Harvest crystals are completely colourless, while others sport natural hues of yellow, pink or brown. 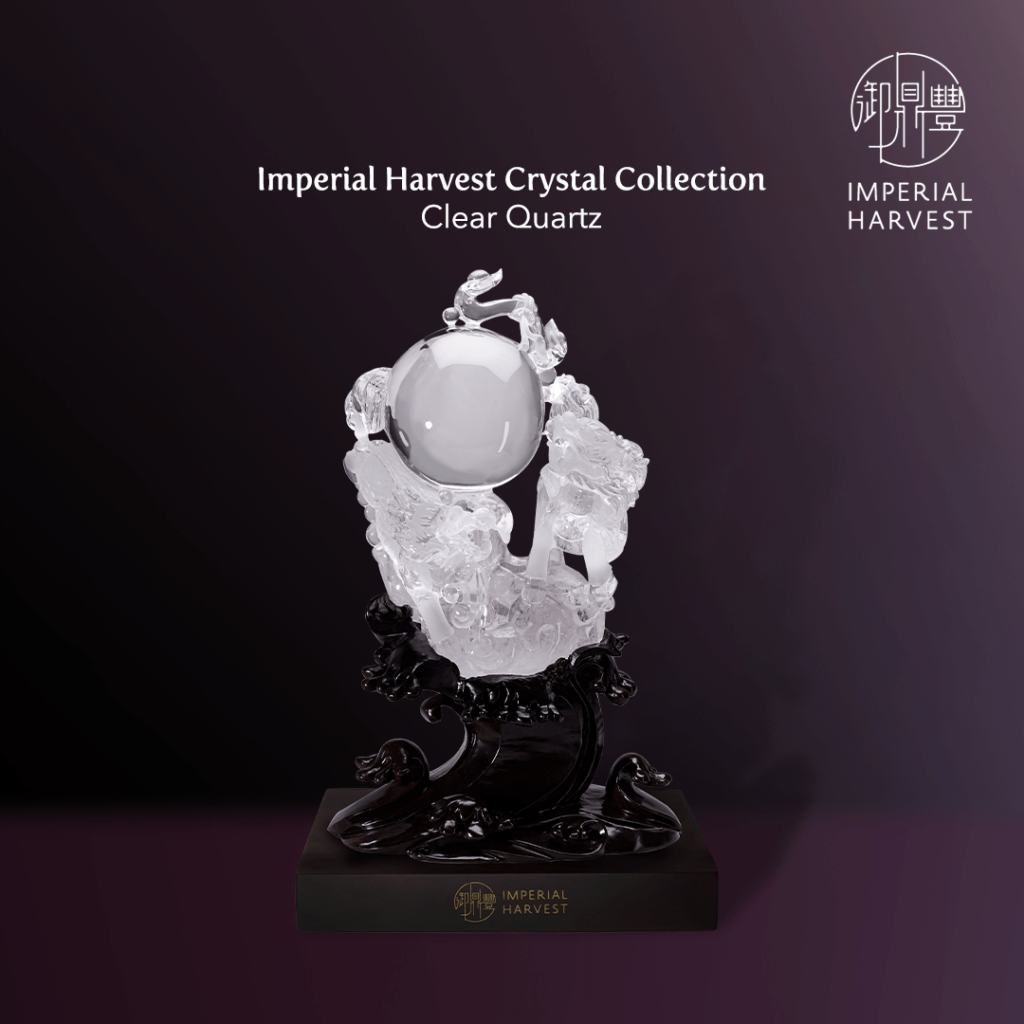 Clear Quartz is colourless and transparent — the result of a crystal growing with little or no contact with its host rock. The majority of clear quartz crystals available in the commercial space are tainted with impurities and faint hues of colour, having been artificially treated to induce colour within the crystal. Imperial Harvest’s curated collection of crystals features clear quartz derived from only the top 1% of crystals — ensuring the natural beauty of the crystal, along with its clarity. 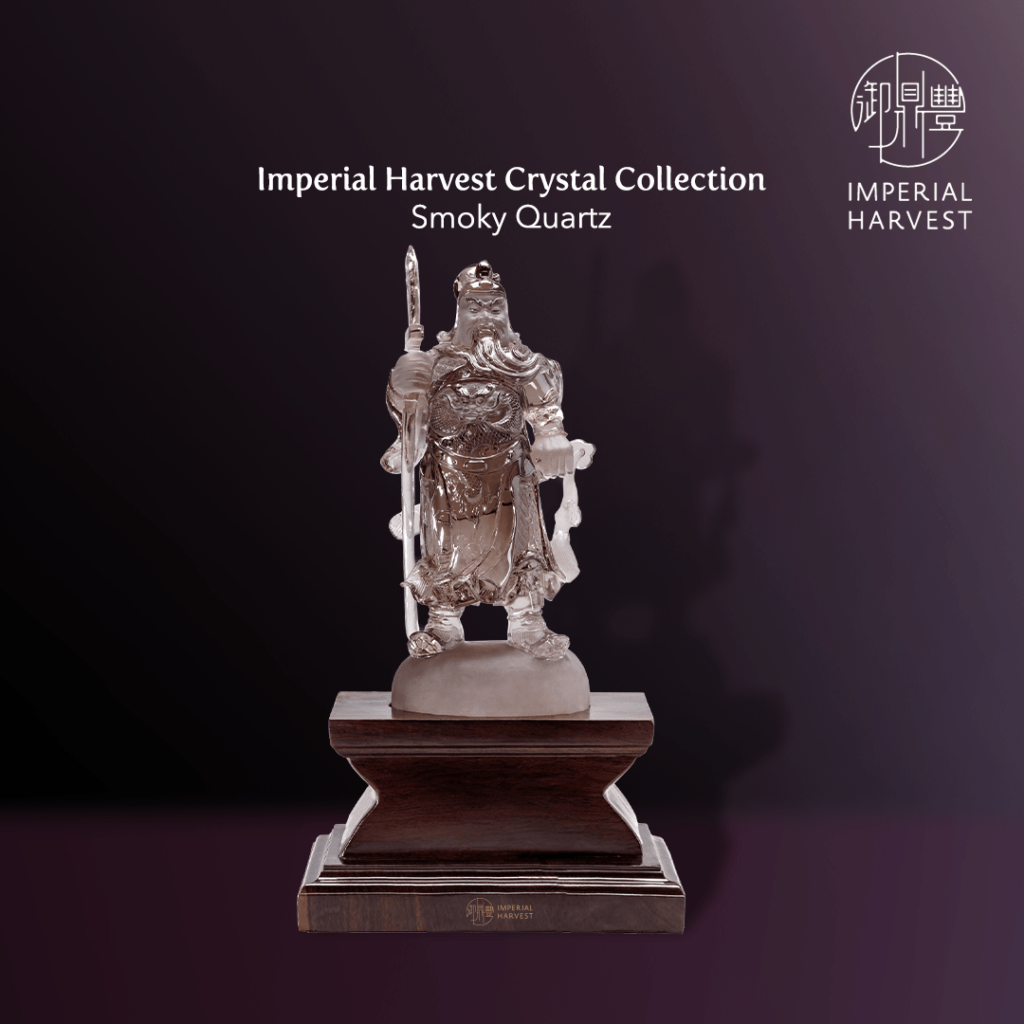 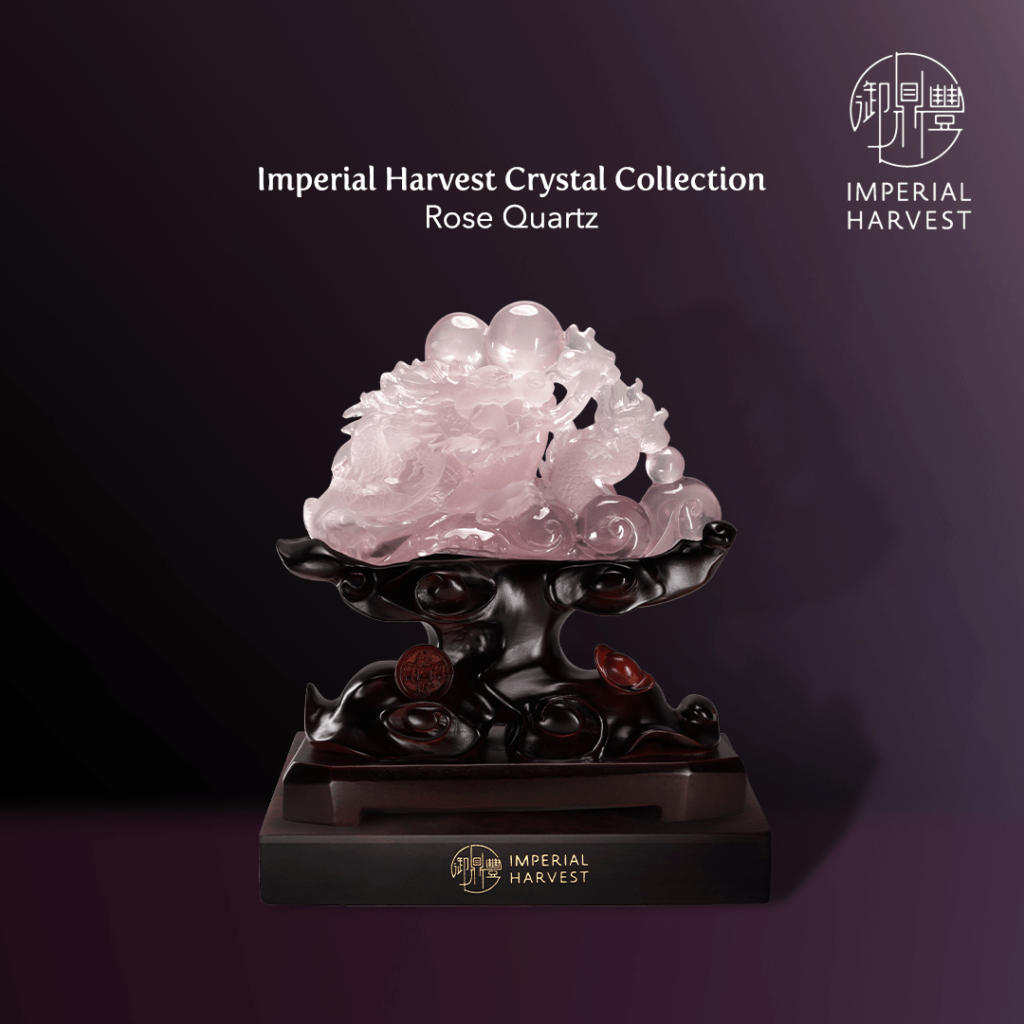 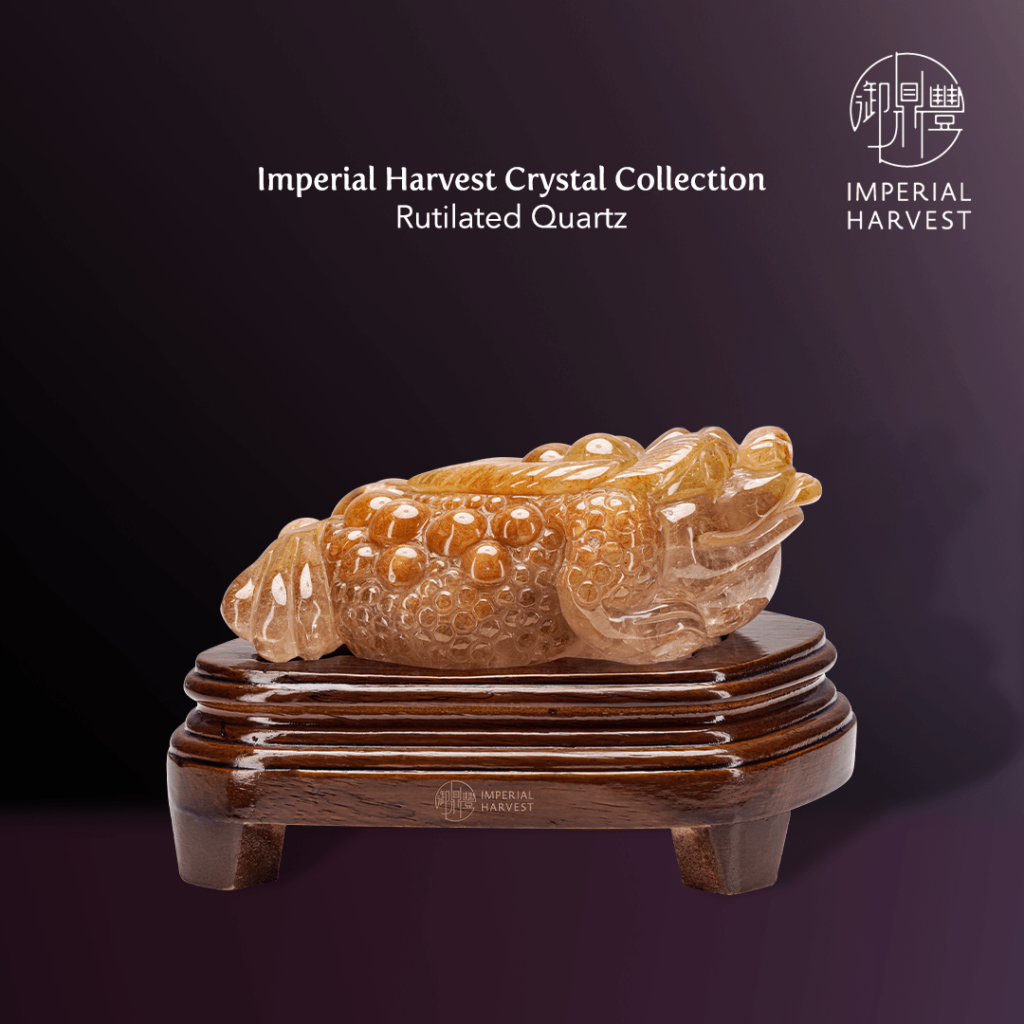 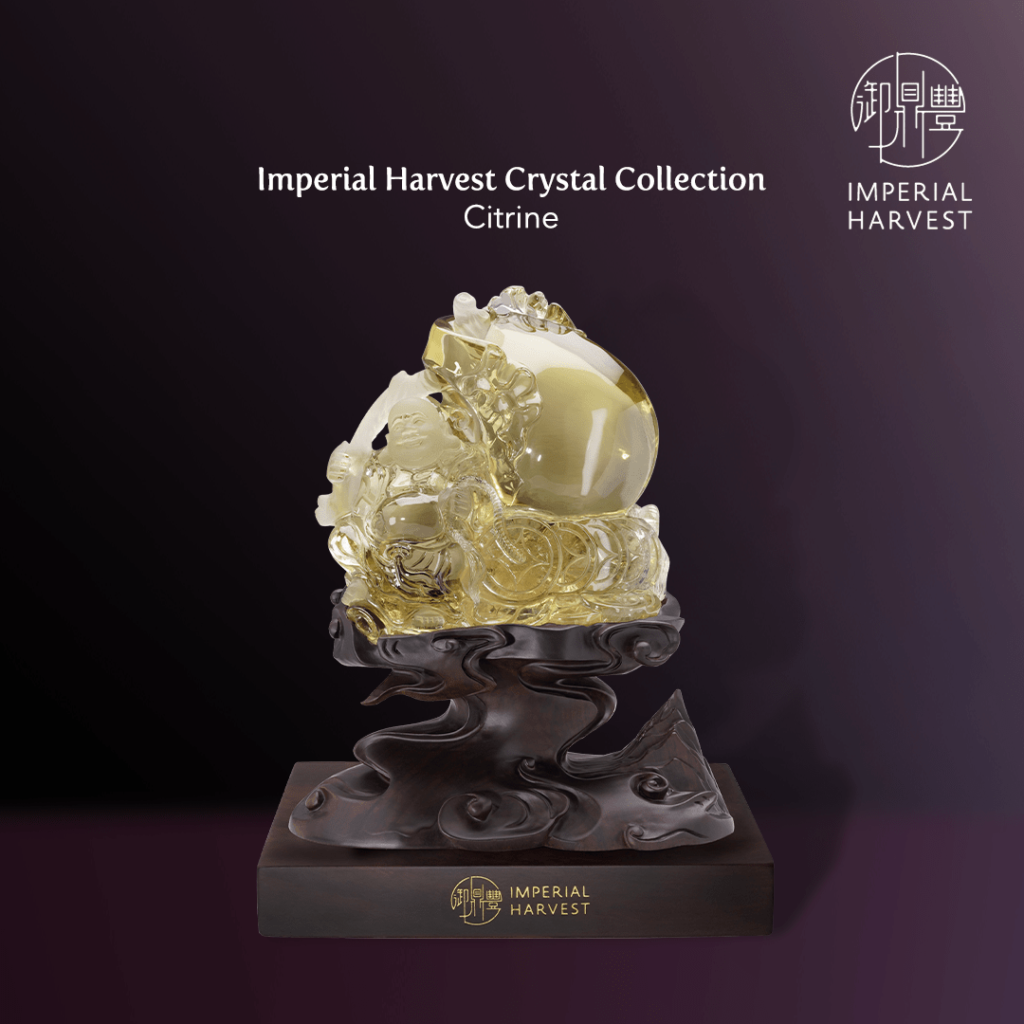 One of the rarest crystals, citrine is found naturally in only a few countries around the world. Studies have shown that 97% of citrine crystals available are heat or colour treated, whereas Imperial Harvest’s collection of all-natural citrine crystals derives its brilliant yellow colour from the natural ferric minerals present in the quartz crystals. 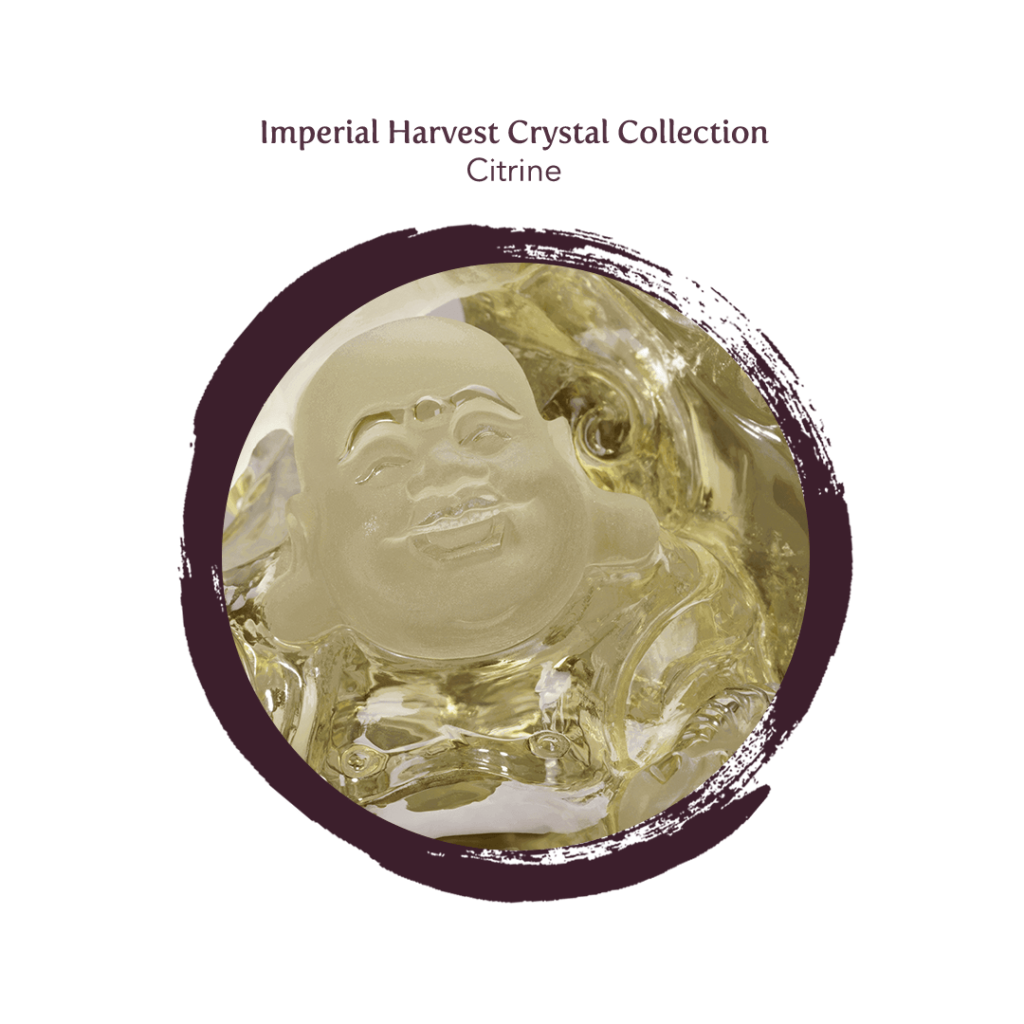 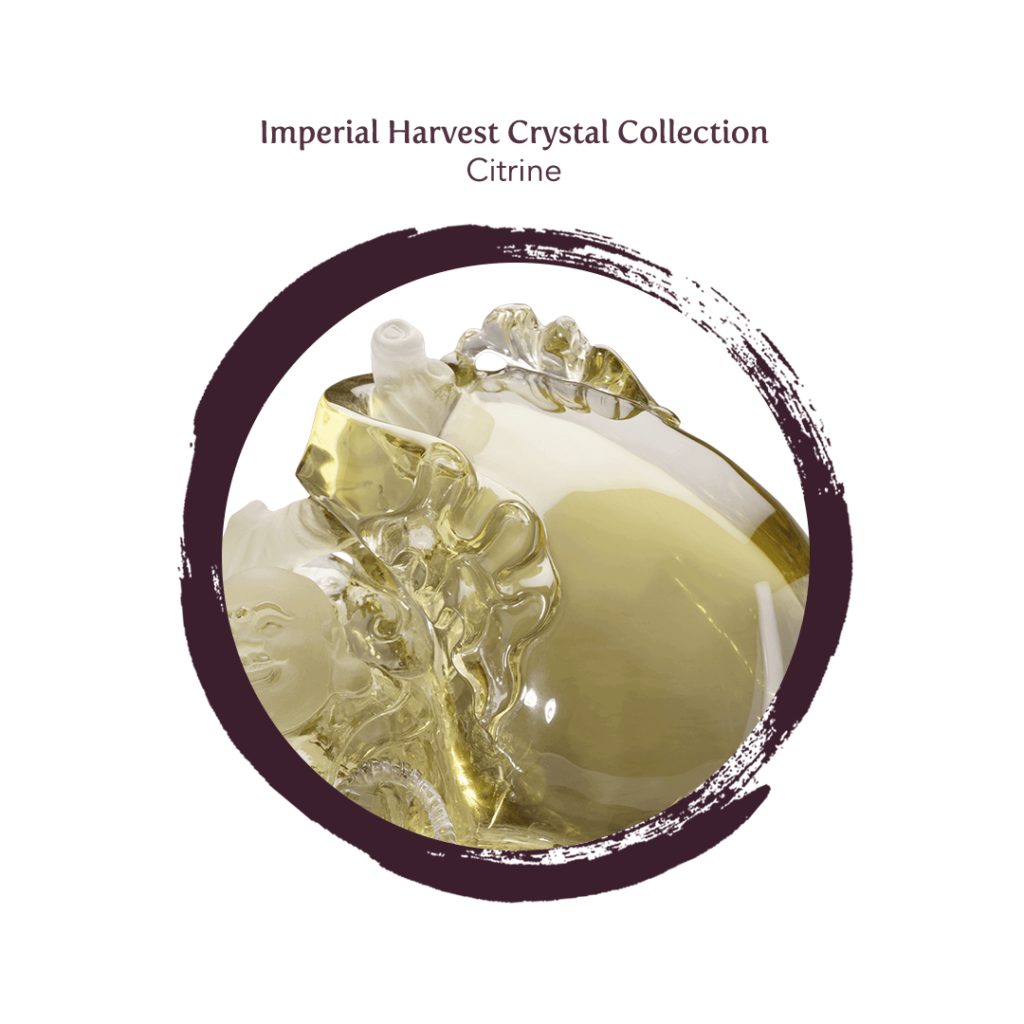 While raw crystals owe much of their inherent beauty to the forces of nature, their manipulation at the hands of Imperial Harvest’s master artisans allows them to truly shine. Imperial Harvest honours these fine crystals with impeccable craftsmanship, bringing them to life with a fully organic approach — without any harsh chemicals or abrasive carving techniques. 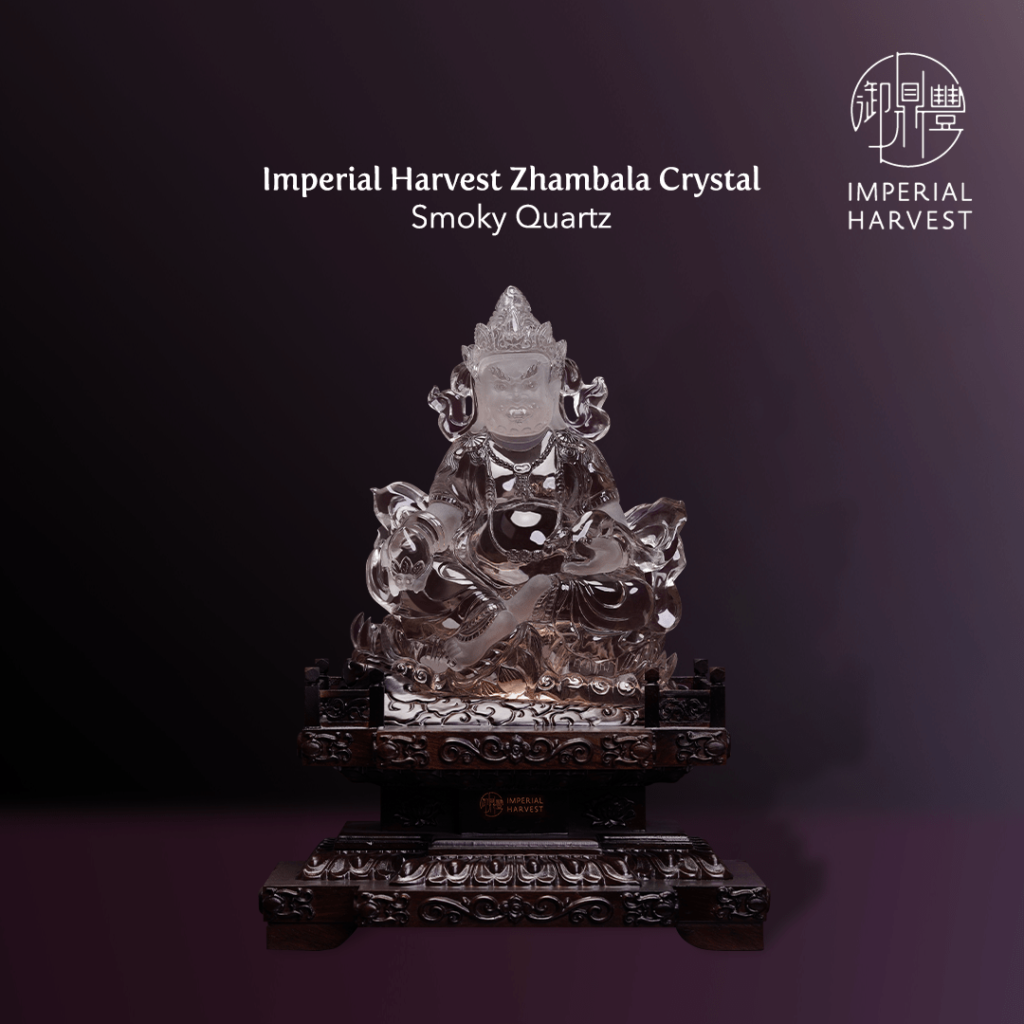 Zhambala is a Tibetan god of wealth and the essence of generosity. Aiding individuals in attaining their financial goals, Zhambala bestows upon them wisdom in attaining their goals. The Imperial Harvest Zhambala Crystal aids its destined owner in removing obstacles in the way of success, leading to unexpected windfalls, generating immense wealth luck and boundless prosperity. 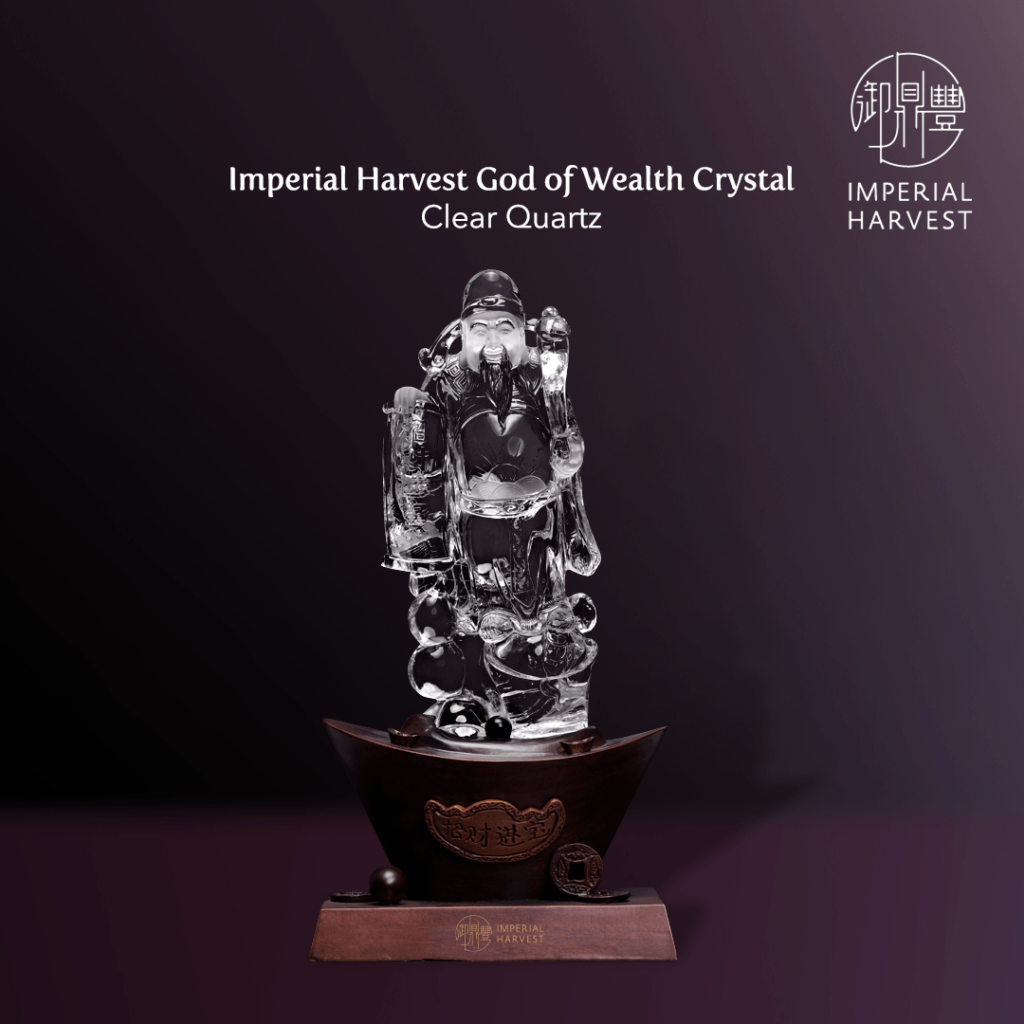 The God of Wealth, also known as Cai Shen (财神), is one of the most prominent symbols of prosperity, wealth and good fortune. The Imperial Harvest God of Wealth Crystal ushers in an abundance of auspicious luck into your homes or offices, bringing with it a prosperous future rife with good fortune. 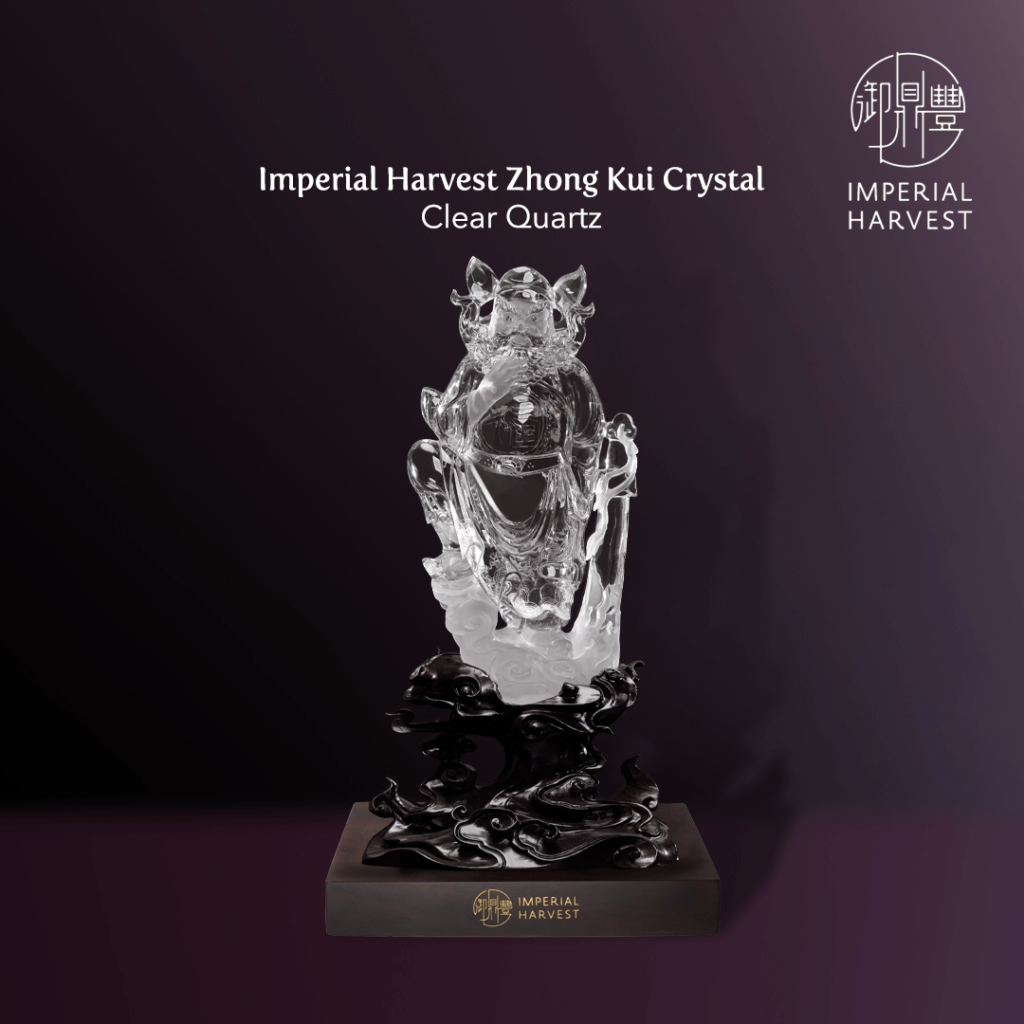 As the Windfall God of Wealth, Zhong Kui aids individuals to achieve monumental financial breakthroughs, guiding them in reaching their greatest aspirations. Imperial Harvest honours Zhong Kui’s intelligence and wisdom with the Imperial Harvest Zhong Kui crystal — propelling its destined owners to reach new heights and breakthroughs in their wealth and careers.

What You Need To Know About the Season of Indirect Wealth