Qinan is the most elusive tier of Agarwood. Many Agarwood connoisseurs often believe that an individual can only experience the heavenly scent of Qinan after three lifetimes of meritorious deeds.

Its rarity and value have been highly prized since the Han Dynasty, when Du Fu, one of the most famous poets of the era wrote “山租输海贝，市舶贱迦楠”. This means “Like a sea shell outweighing the rental income from a mountain, a single piece of Qinan Agarwood is worth more than a municipal ship.”

Each precious piece of Qinan Agarwood is meticulously hand carved with auspicious designs to enhance its natural beauty and power.

Resin pattern: When sliced open, distinct streaks of black resin reveal themselves on the Black Qinan Agarwood’s surface. Glistening and glimmering, they resemble the elegant glamour of a tranquil night sky.

Aging and Maturation: More than 1250 years 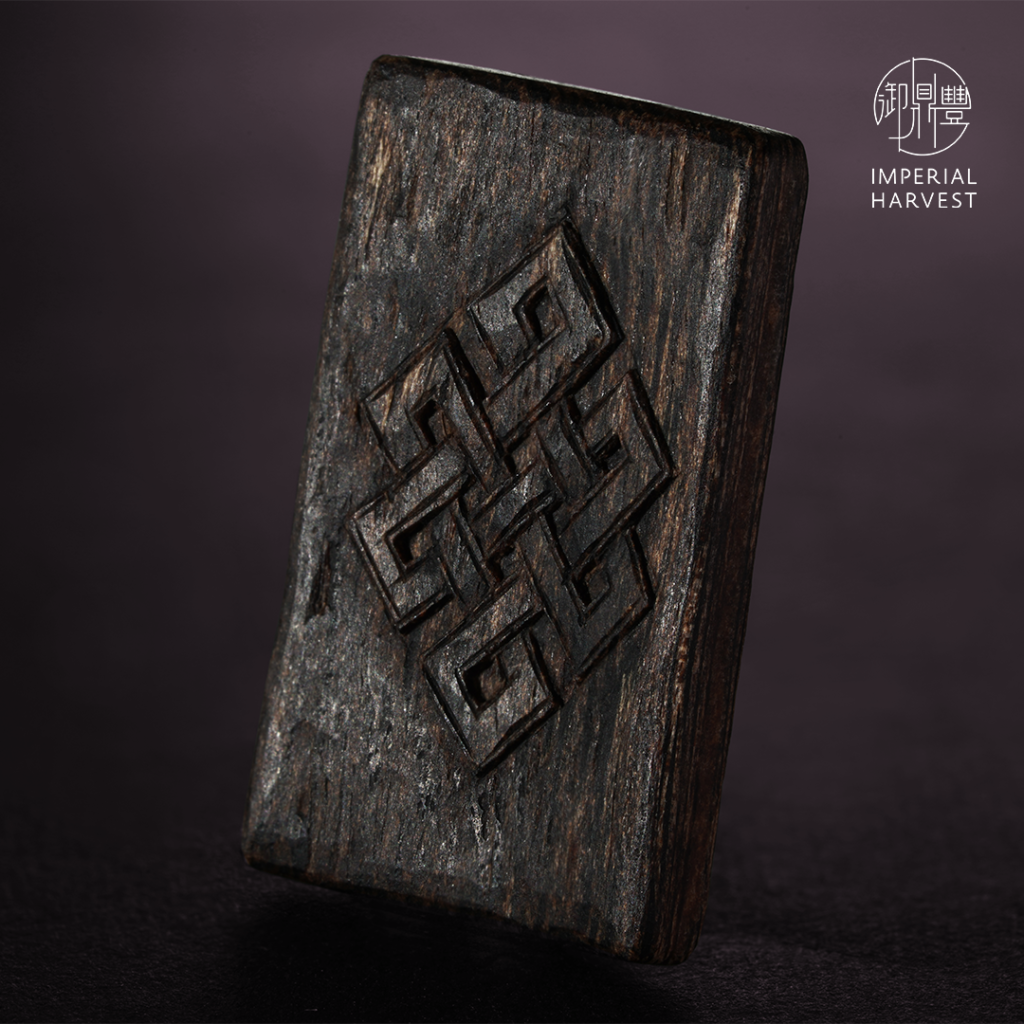 The mystic knot is the sixth of eight auspicious symbols in Buddhism. Religious scholars have proposed that the mystic knot was presented to Buddha when he first attained enlightenment. Indeed, the mystic knot is found engraved on the sole of Gautama Buddha’s feet, as well as on the chest of the supreme hindu deity, Vishnu.

Also found inscribed on clay seals from the Indus Valley Civilisation (circa 2500 B.C.E.), the mystic knot symbolises the powerful ability to overcome adversities. Since ancient times, peoples across the Asian region have regaled it as an emblem of prosperity and fortune. Today, Imperial Harvest Feng Shui, alongside Buddhists, Jainists, Hindus and even the Celtics, regularly feature the mystic knot in our blessed Treasures. 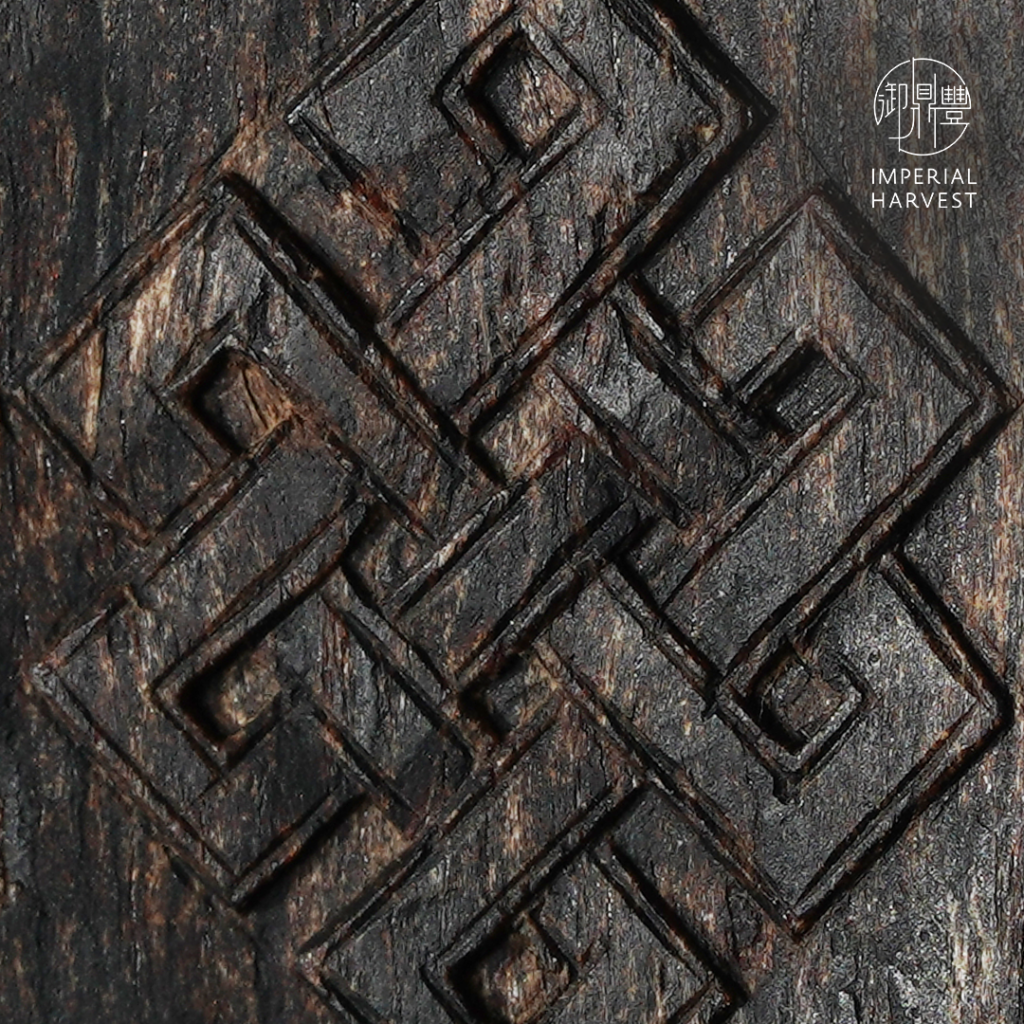 Coupled with the auspiciousness of Black Qinan Agarwood, the mystic knot manifests opportunities for its ambitious wearers. Adorners of the Imperial Harvest Black Qinan Mystic Knot are blessed with abundant auspicious luck and mental clarity. Their sharpened intuition empowers their career progression. Simultaneously, it shields and protects them from setbacks and adversities.

Resin pattern: When revered in all of its grandeur, the Yellow Qinan Agarwood reveals a full-bodied honey-coloured resin lining which resembles luscious golden silk.

Scent characteristics: The Yellow Qinan Agarwood boasts a sophisticated fragrance. Its top note resembles that of amber with hints of cinnamon. Its middle note is full-bodied yet tender, with a calming floral scent. Finally, the bottom note concludes with an alluringly aromatic spice and smokiness reminiscent of well-aged cognac.

Aging and Maturation: More than 1500 years 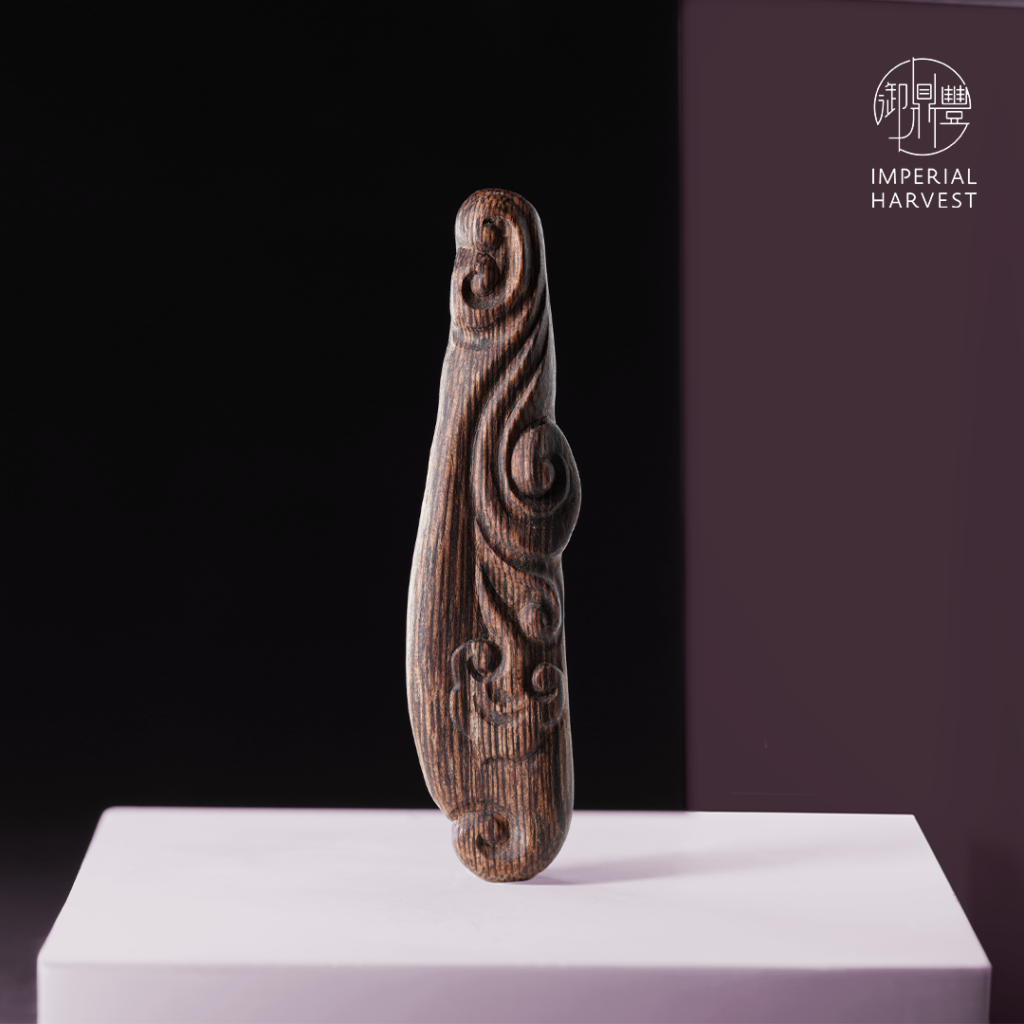 Lingzhi is one of the most auspicious motifs in Imperial Feng Shui. As the fungi’s shape resembles the head of ruyi sceptres, it is associated with the ruyi and its meaning of ‘everything as you wish it’.

In ancient China, it was widely believed that Lingzhi would be discovered when a virtuous ruler was guarding the throne. It was a highly coveted and welcome sign that an empire would be peaceful and prosperous.

Needless to say, this rendered the Lingzhi highly popular with Chinese emperors. When the Lingzhi was discovered during Emperor Wudi’s reign of the Western Han dynasty, he wrote poems in its praise, declared an amnesty for all prisoners, and donated food and wine to a hundred households.

The Lingzhi’s association with prosperity was also borne out during the Han Emperor Wudi’s 54 year reign, since it is one of the longest in imperial history. 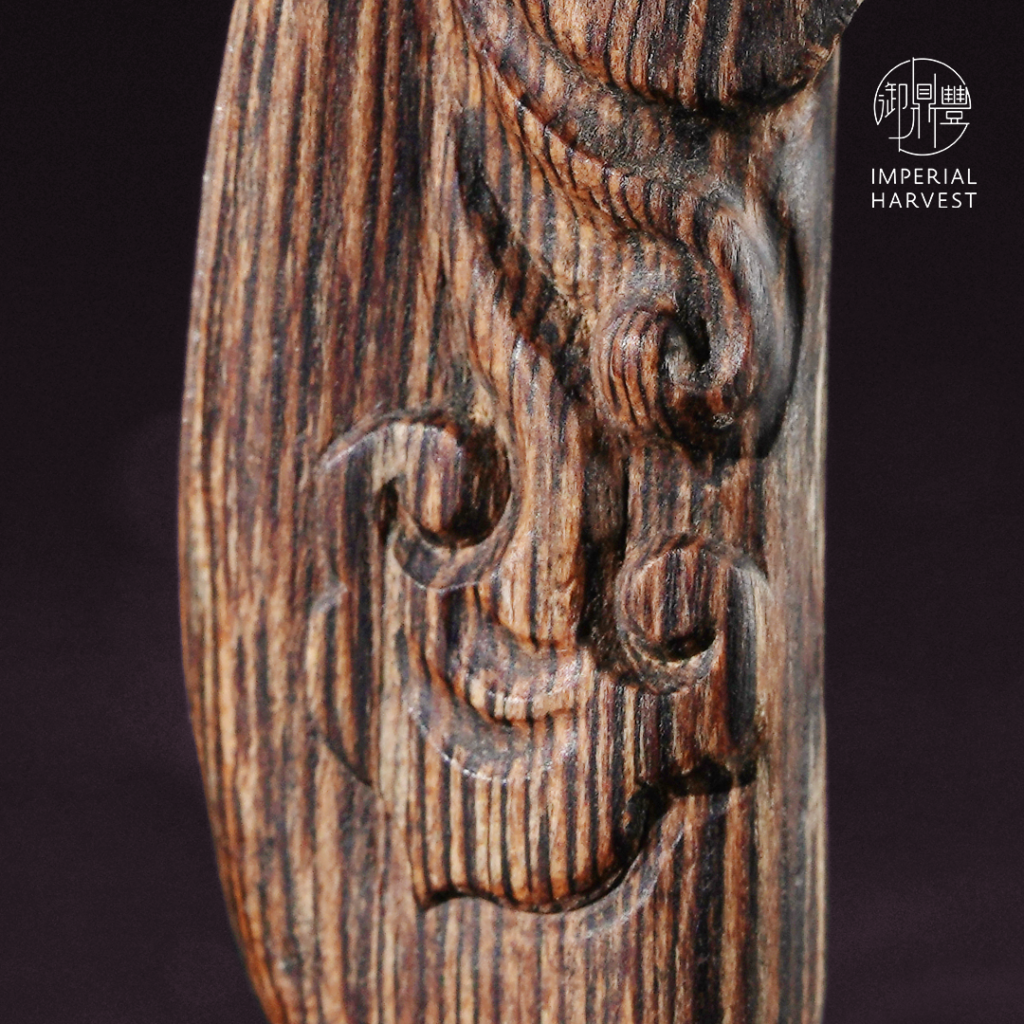 Similar to how the discovery of Lingzhi symbolised blessings from the heaven for the Chinese rulers, Imperial Harvest Yellow Qinan Ling Zhi (金丝结黄奇楠灵芝) blesses the wearer with long-lasting success, opportunities and benefactors at every stage of their business, career, investment and trading ventures.

Resin pattern: A slice through the Purple Qinan Agarwood reveals a reddish-purple resin that meanders elegantly and intricately throughout its entire body.

Scent characteristics: The Purple Qinan Agarwood touts a robust aroma. Its top note emanates a smooth and subtle floral scent which makes for a delightful first impression. This lighter scent develops and matures into a graceful almond-like mastic aroma.

Aging and Maturation: More than 2000 years 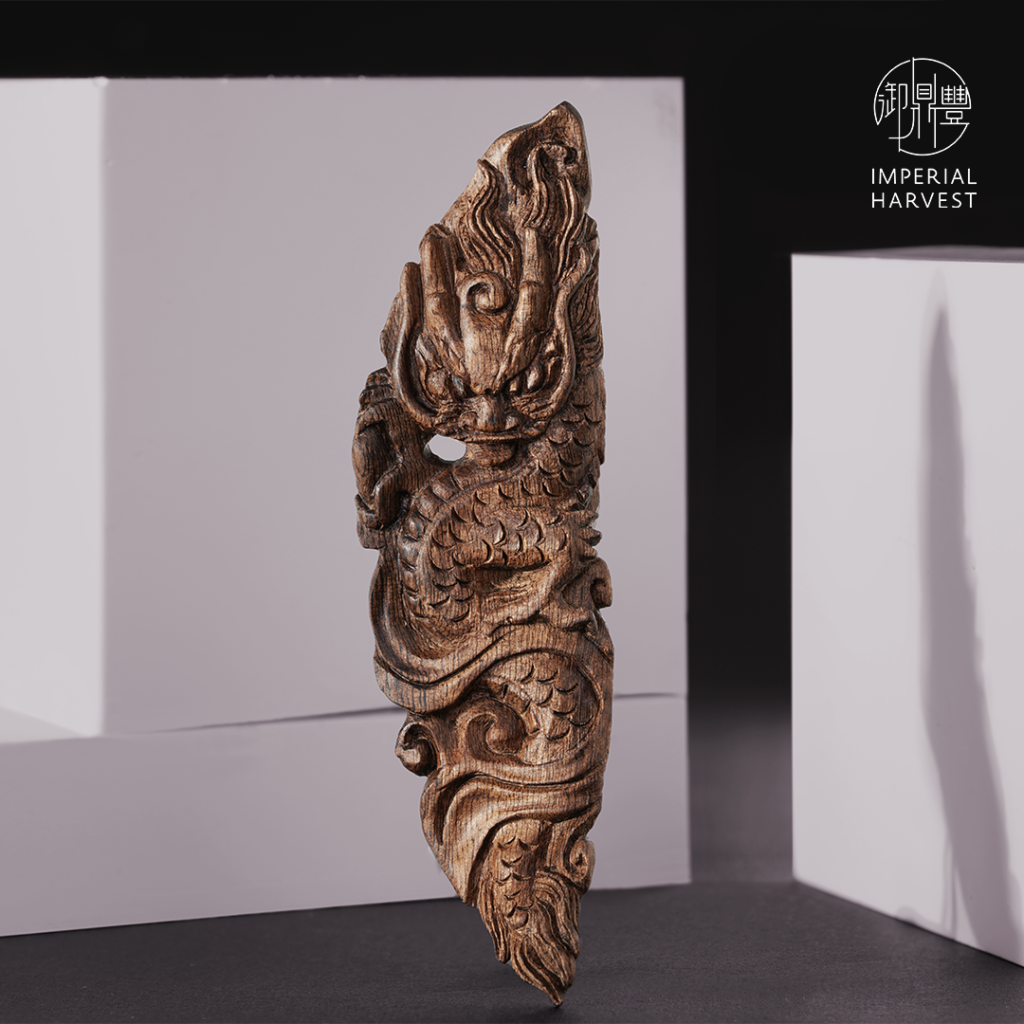 According to ancient Chinese legends, the powerful and well-respected Yellow Emperor (黄帝) achieved immortalisation as a dragon at the end of his reign. This enabled and facilitated his honourable ascent to heaven.

In line with the famous myth, Chinese emperors were often referred to as the glorious “descendants of the dragon” as they venerated the Yellow Emperor as their distinguished ancestor. This accounts for the presence of the dragon motifs on the Emperor’s robe, throne and throughout the imperial palace. 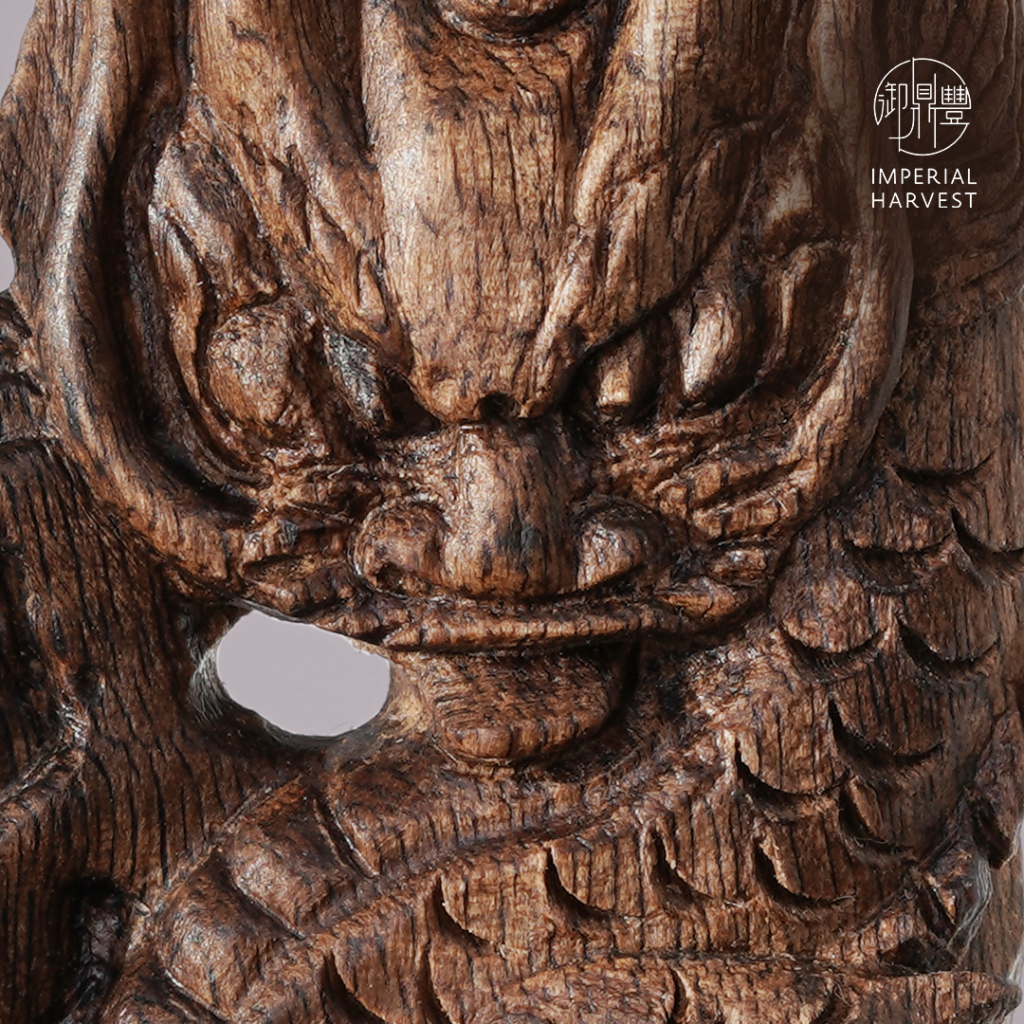 Resin pattern: The surface of Green Qinan Agarwood is a dark blueish green. This is a result of its rich and dense resin being infused with agarwood fibre. The interior cross-section of the Green Qinan Agarwood, when sliced open, features a tasteful blend of yellow-green Qinan resin.

Aging and Maturation: 2500 years and above 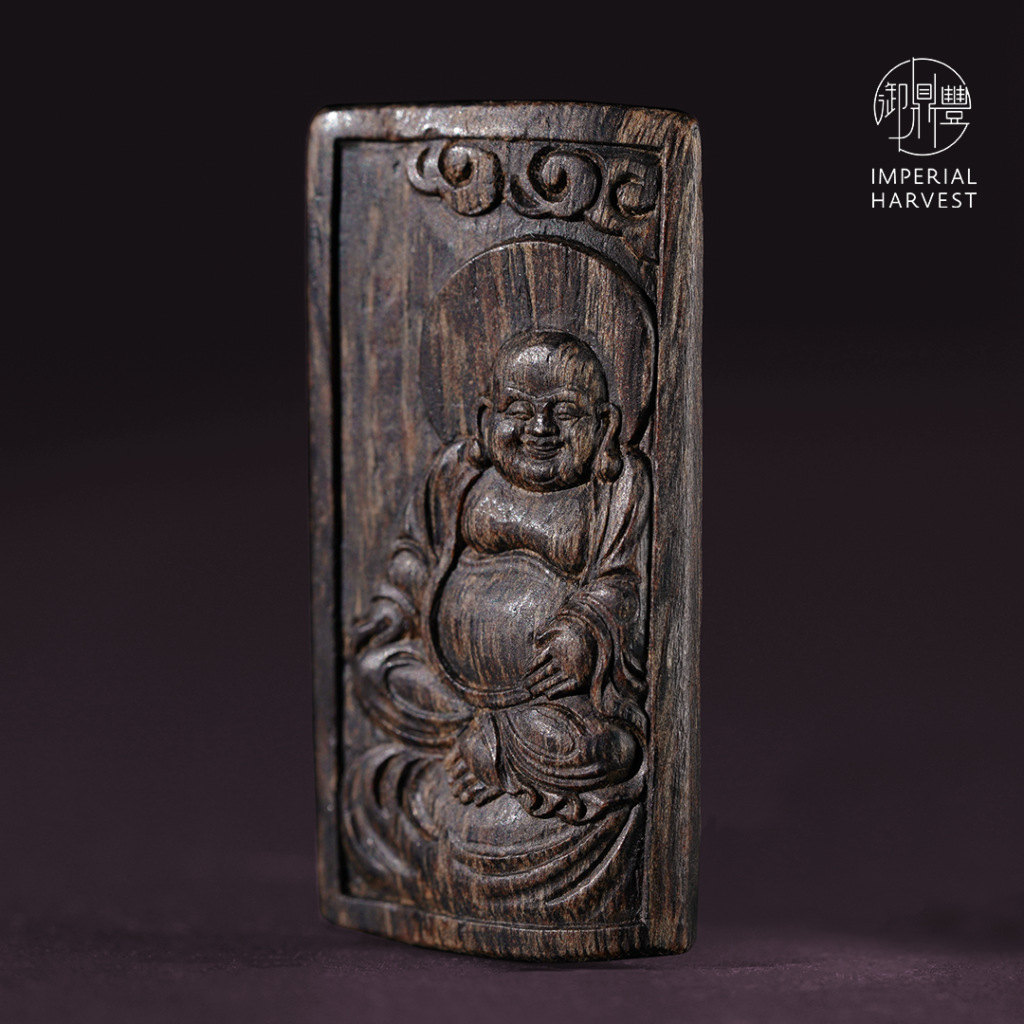 The Laughing Buddha with a big belly is a symbol of the future Buddha, referred to as Bodhisattva Maitreya. Etymologically, “Maitreya” is derived from the Sanskrit word maitri, which means benevolence, amity, goodwill and kindness. With a widespread influence across the Asia Pacific region, from Vietnam and Japan to India and China, the Laughing Buddha’s image of limitless compassion is a powerful symbol. It is emblematic of everlasting joviality, abundance and auspiciousness.

Described as in a state of constant meditation, the Laughing Buddha is a figure of Nirvana. In Nirvana, deemed the final goal of Buddhism, suffering ceases to exist. Mind, heart, body and soul are unified in peace and tranquility, with the individual released from all cycles of suffering. Liberated and enlightened, an individual who has attained Nirvana is in an eternally idyllic and abundant state. 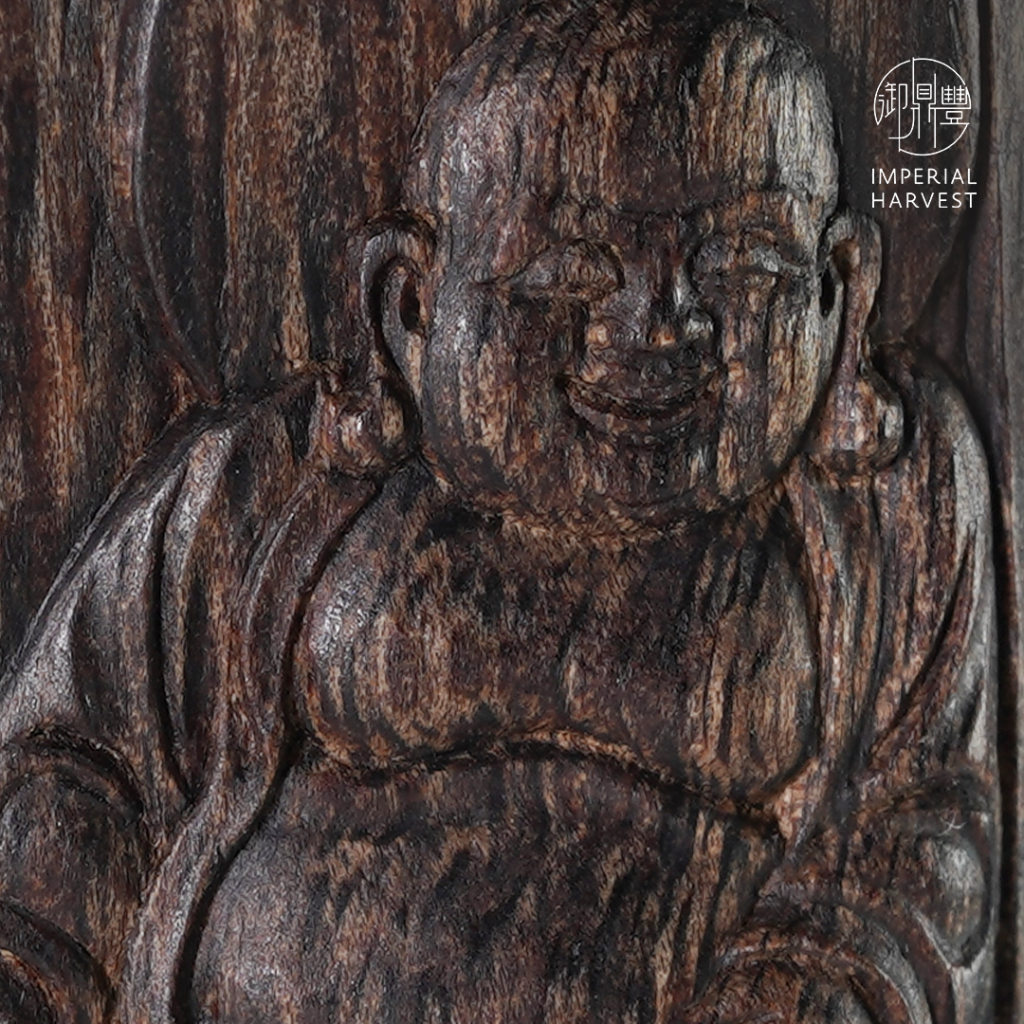 The Imperial Harvest Green Qinan Laughing Buddha, an elegant infusion of culture and Imperial Feng Shui, blesses its wearer with the eternal joy and prosperity of the Laughing Buddha. It attracts and manifests opportunities sought after by the wearer, bestowing them with fortune and happiness. Furthermore, it also inspires the sustenance of a positive and groundbreaking mentality.

Scent characteristics: The White Qinan Agarwood possesses five heavenly tiers of fragrance. Its aroma develops from cooling to honey-like, thereafter taking on a mastic note. It eventually exudes a refreshing floral and fruity scent. Each fragrance tier is distinctive, diffusive and strong without being overbearing.

Aging and Maturation: 3000 years and above 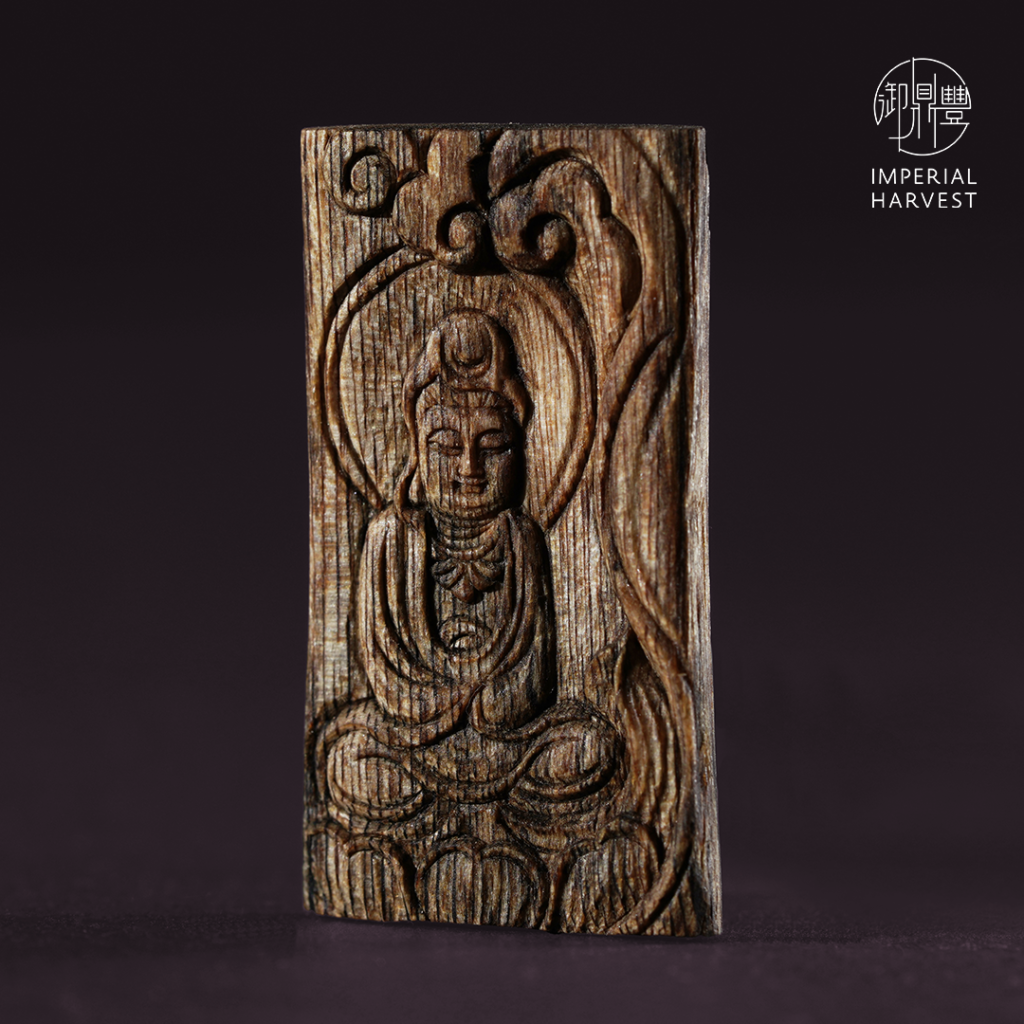 In East Asian tradition, the Bodhisattva Avalokitesvara is more commonly known as Guan Yin (Goddess of Mercy). Instead of being a male figure, she is the female spiritual embodiment of compassion and mercy.

The 33 manifestations of Guan Yin are known to bestow her devotees with bountiful luck and groundbreaking growth. They promote and elevate success in multiple endeavours, regardless of their nature.

Naturally, it is for this very reason that East Asia is scattered with a countless number of temples dedicated to Guan Yin. Kiyomizu-dera in Kyoto, Mount Putuo in Zhejiang and Kwan Im Thong Hood Cho Temple in Singapore are frequented as cultural icons by tourists, and as sanctified sites of worship by a massive number of devotees.

The Heart Sutra, attributed largely to Guan Yin, was developed by Master Xuanzang (602-664 A.D.), a Chinese scholar and monk with ministerial ancestors during the Eastern Han Dynasty. Erudite and deeply introspective, he recognised the merits of Guan Yin as a powerful source of strength and transformation. 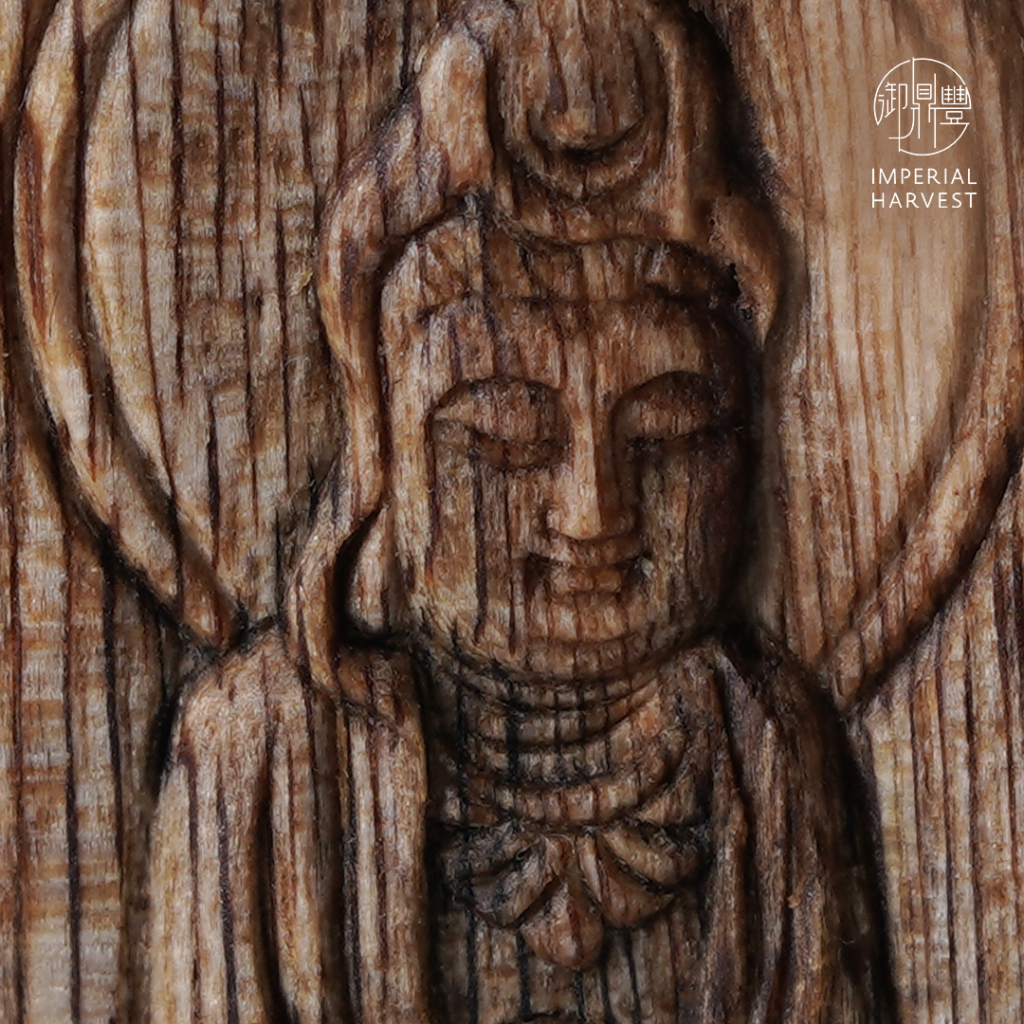 At Imperial Harvest, we similarly recognise the wisdom, kindness and power of Guan Yin in effecting positive changes of fate. The Imperial Harvest White Qinan Guan Yin endows its wearer with the capacity to forge their desired destinies.