Posted by Imperial Harvest on 17 September 2021

With their able and committed leadership, eminent Qing dynasty emperors such as Kang Xi and Qian Long steered the empire through a golden age in its illustrious history. Under their stewardship, the Qing dynasty prospered economically, militarily, and also in its cultural and artistic pursuits.

Well-known as an avid cultural connoisseur, Emperor Qian Long amassed extensive collections of fine art over the course of his reign. Paintings, sculptures and numerous other works were painstakingly researched and acquired by his team of art and culture aides. These precious artefacts firmly entrenched Emperor Qian Long’s legendary status as an ardent patron of fine art. Some of these pieces have withstood the test of time, providing precious insights into the richness and diversity of the Qing dynasty’s cultural scene.

The plurality of Qing dynasty art and culture is exemplified by its incorporation of foreign elements. Emperor Qian Long’s penchant for exotic artistic styles led to the invitation of Giuseppe Castiglione, a Jesuit missionary and painter, to produce artwork and design structures within the Forbidden City. Throughout his service to the imperial court, his fusion of Western artistic techniques with Oriental cultural symbols imbued the palace with a distinctive East-meets-West aesthetic.

Amidst Emperor Qian Long’s varied collections lies an important artefact commonly known today as the Qian Long Jadeite Mountain. This is of particular interest to contemporary practitioners of Imperial Feng Shui, given its immense significance to this ancient art. 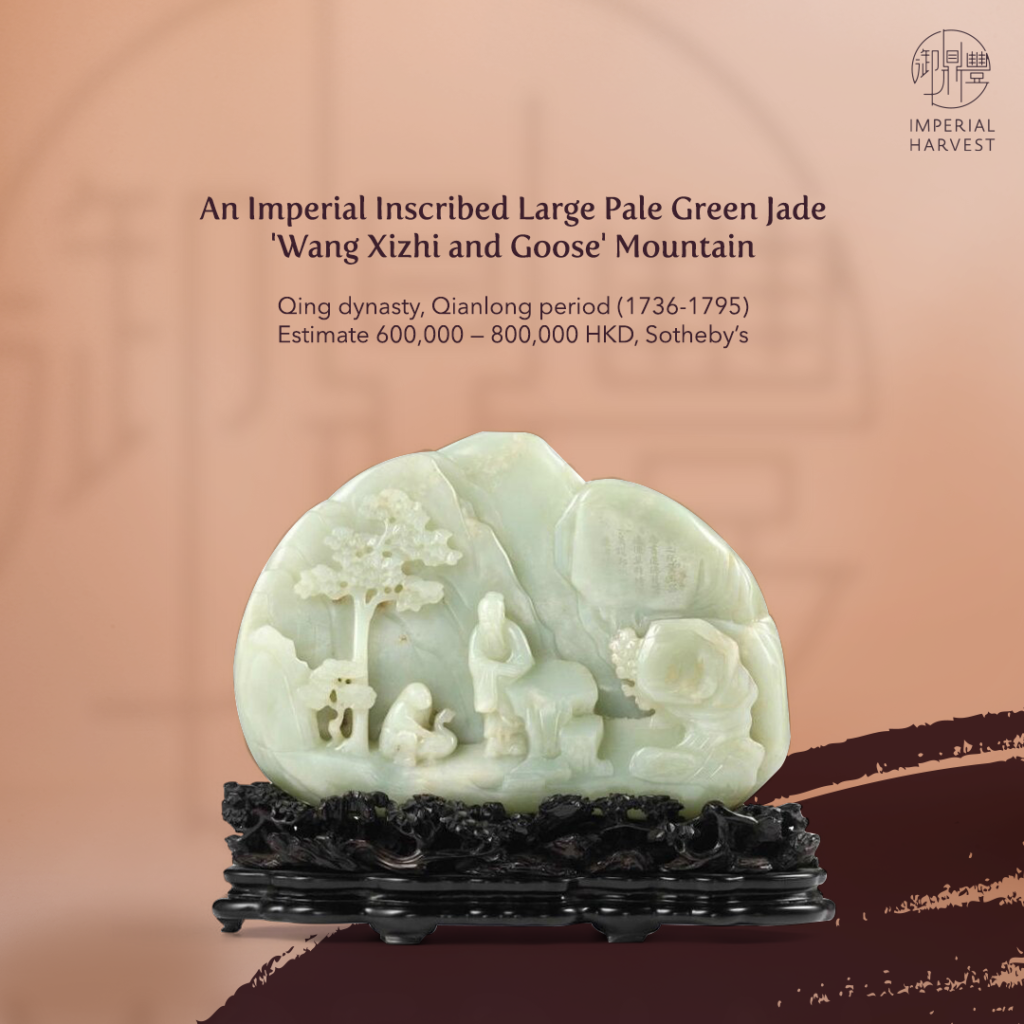 Click here for an insight into the benefactor sector within homes and offices, and how the Qian Long Jadeite Mountain activates it to usher in support from influential benefactors. Such powerful support may be harnessed in a variety of ways to facilitate the furtherance of one’s personal and professional pursuits.

The Celebration of Abundance in Autumn

In ancient China, the season of autumn was eagerly anticipated, as it was when many crops matured and bore fruit. This resulted in autumn becoming inextricably associated with a season of harvest. 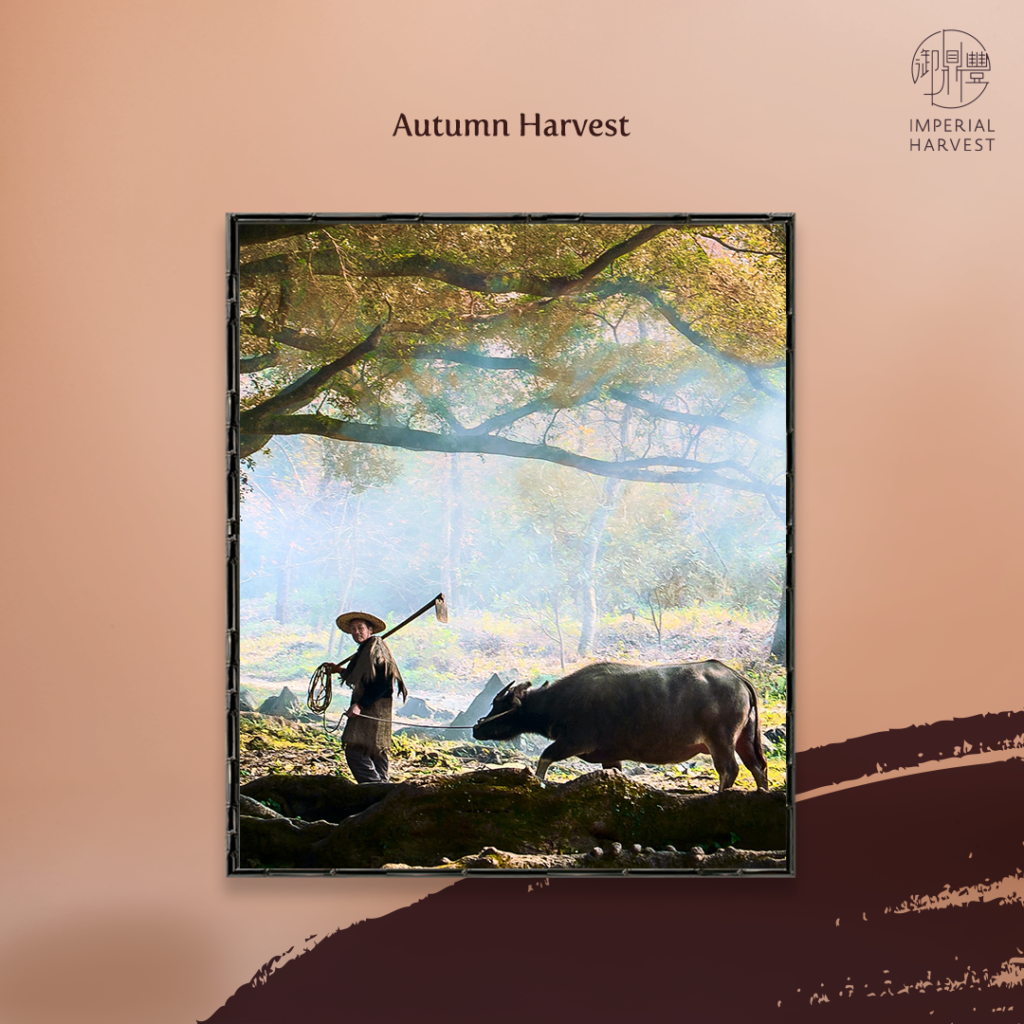 The abundance of the autumn harvest was a cause for celebration. It was when friends, family and even acquaintances gathered to partake in communal feasts and other activities. Apart from prayers to give thanks for the bountiful harvest, many participated in special autumn fairs and festivals that emerged during this time. The rich cultural festivities and abundance of this period transformed it into a time of thanksgiving and conviviality.

The immense significance of autumn was also not lost on the imperial court. During this period, the emperor led court officials in a series of elaborate imperial rites and rituals. As the majority of imperial court revenue was derived from agriculture, this season of harvest was marked by ancestral worship and livestock sacrifices to express gratitude for the abundant yield. Other imperial practices included ceremonies for various deities, as well as the emperor’s sampling and endorsement of the first harvests.

Autumn and the Metal Element in Imperial Feng Shui

In the study of landforms in Imperial Feng Shui, there are five mountain formations that correspond to the five elements of metal, earth, wood, fire and water. Each of these bears a unique distinguishing shape or structure. 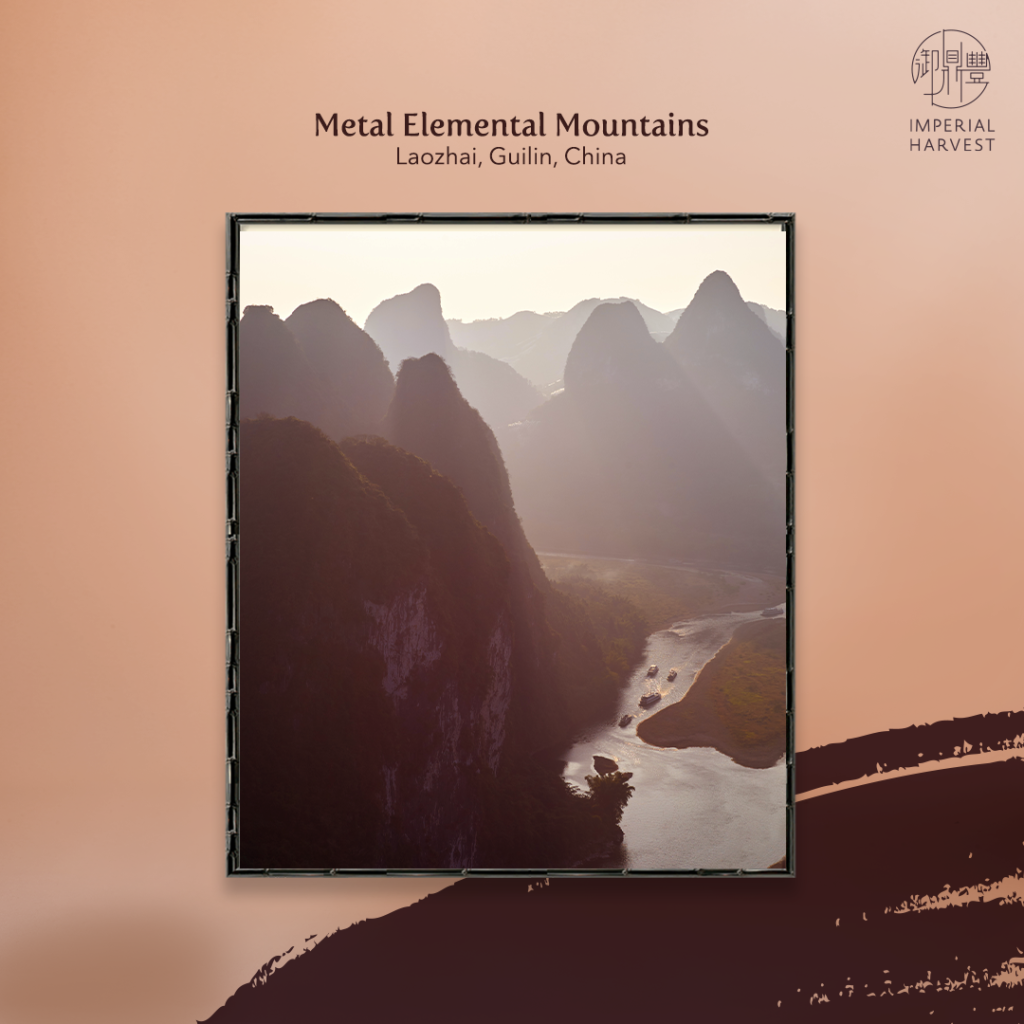 According to Imperial Feng Shui principles, autumn corresponds to the metal element. In a tribute to the season of metal, the Imperial Harvest Autumn 2021 Qian Long Jadeite Mountain collection consists of metal elemental mountains, which possess a smooth rounded top. They are widely feted as powerful wealth-creating structures, bringing multiple large streams of wealth to those who effectively leverage their auspicious properties.

This sprawling garden complex was commissioned by Emperor Qian Long as a luxurious retirement abode, and was completed in the late 18th century. Kept largely intact over the years, it today offers unique insights into the golden age of his reign. 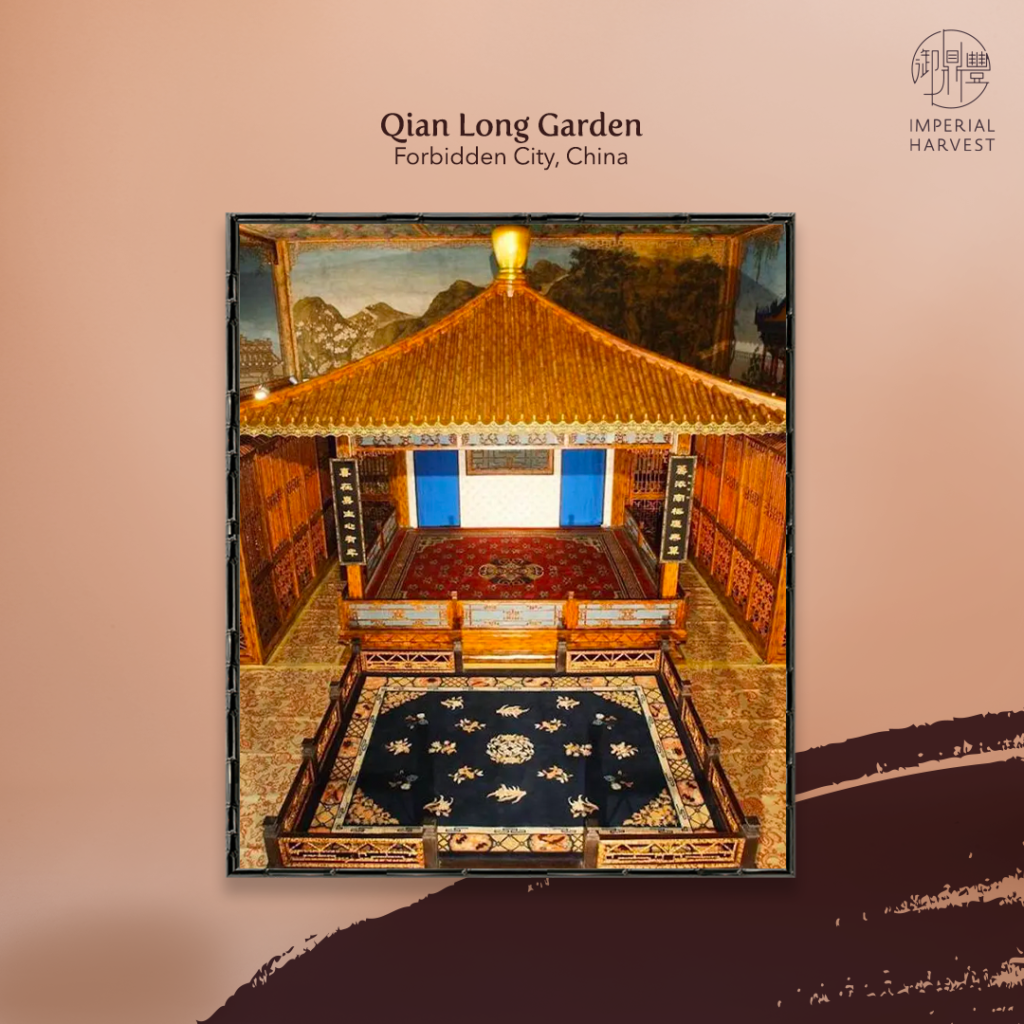 The Qian Long Garden was built to reflect its namesake’s embracement of cross-cultural exchange and interaction. Its extensive incorporation of European cultural and artistic elements is a testament to the influence of Castiglione, the Jesuit imperial court designer invited from Italy by Emperor Qian Long.

One of these is the trompe l’oeil technique, which was commonly employed in European paintings to achieve three-dimensional depictions of objects. Borrowing from this artistic technique, many prevailing buildings and structures deftly manipulated human visual perception to generate optical illusions of their design elements. This gave rise to a novel genre of “forced perspective”, which allowed designers to create desired perceptions or “perspectives” of their work. 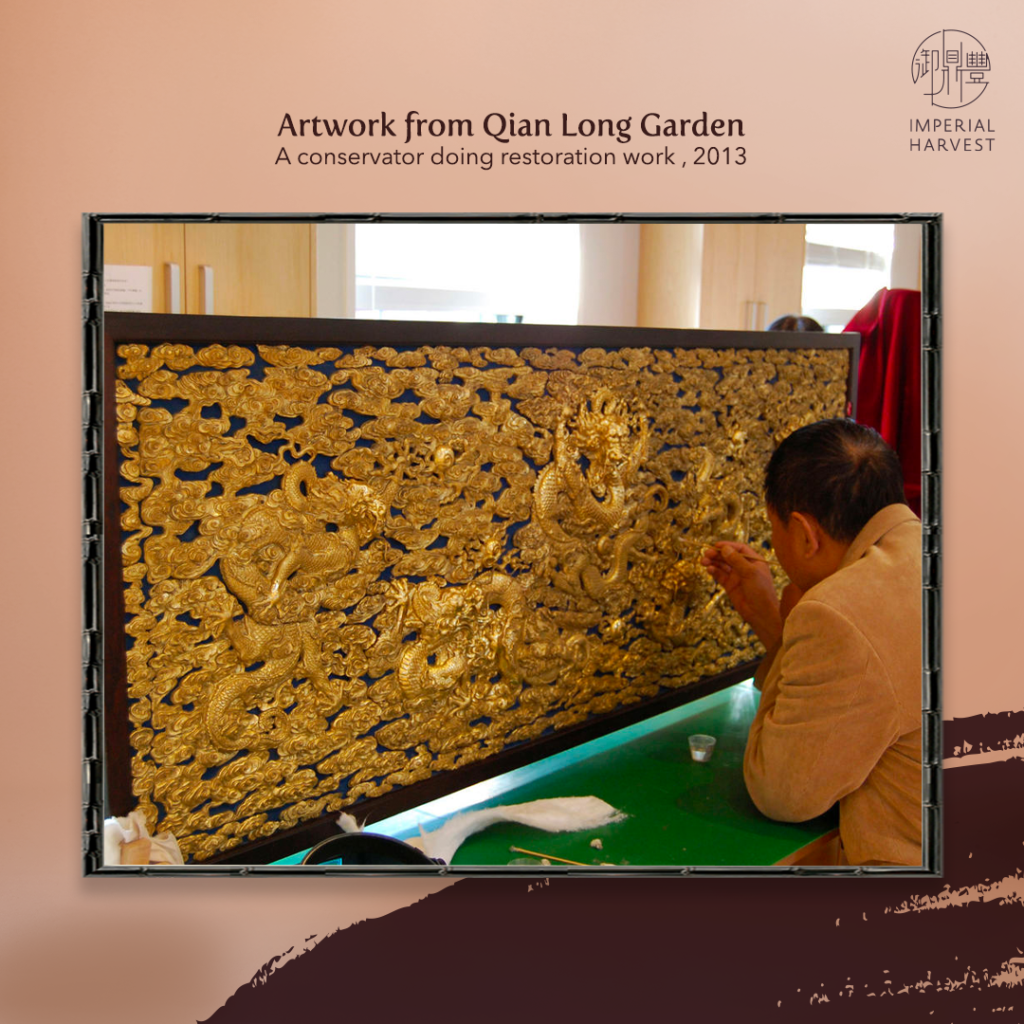 Within the Qian Long Garden, a wall of trompe l’oeil silk paintings deploys this European technique on a canvas material highly favoured by Chinese nobility. An assortment of elaborate murals throughout the garden extensively employs chiaroscuro techniques, harnessing the interplay of darkness and light to accentuate contrasts and shadows. These were applied to common Oriental materials such as bamboo carvings and jade pieces. Such novel architectural language gave rise to a unique fusion of diverse cultures within the garden compound.

Just like the Qian Long Garden, the Imperial Harvest Autumn 2021 Qian Long Jadeite Mountain Collection weaves into its construction the bold and innovative styles of Western art introduced by Castiglione. It repurposes these Western techniques to accentuate the exquisite design of each masterpiece. Forced perspectives of each jadeite mountain are achieved by manipulating visual perception to direct the viewer’s gaze towards the strategically-placed auspicious features. 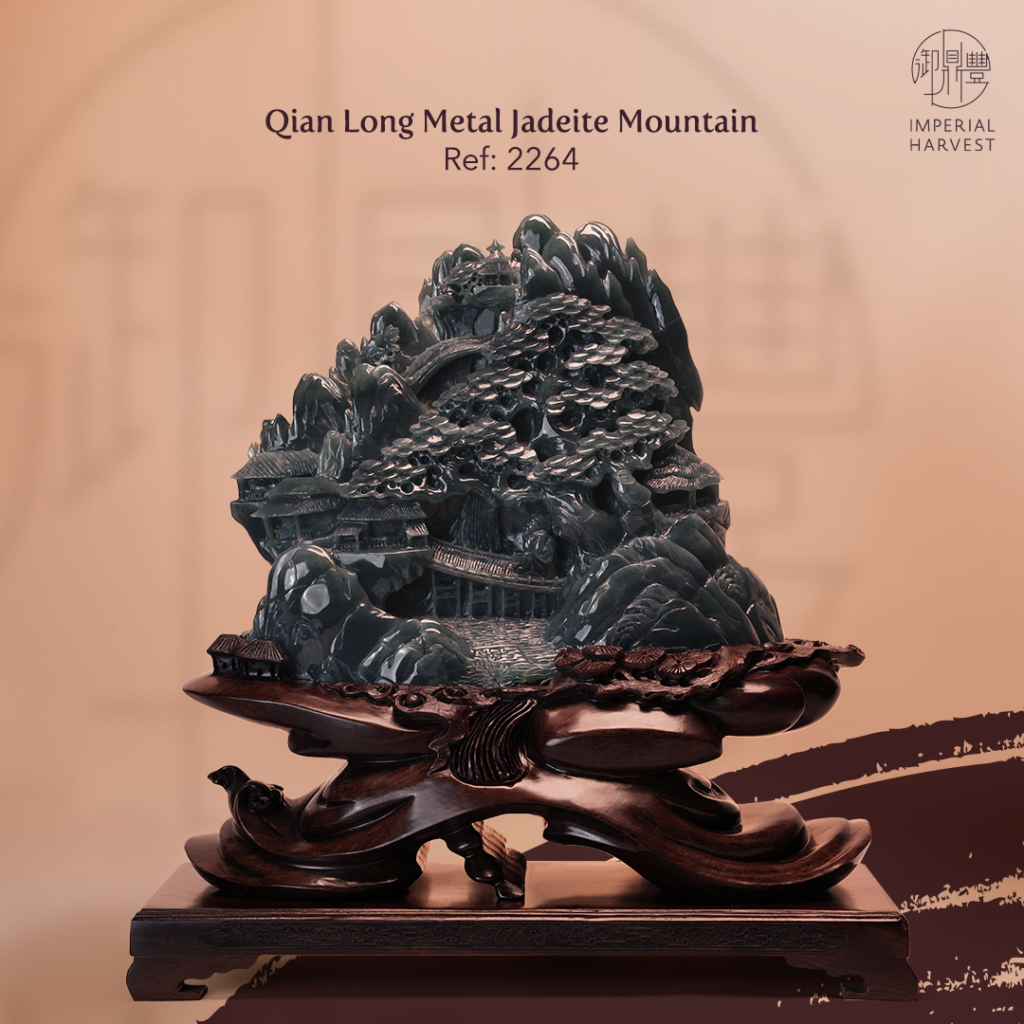 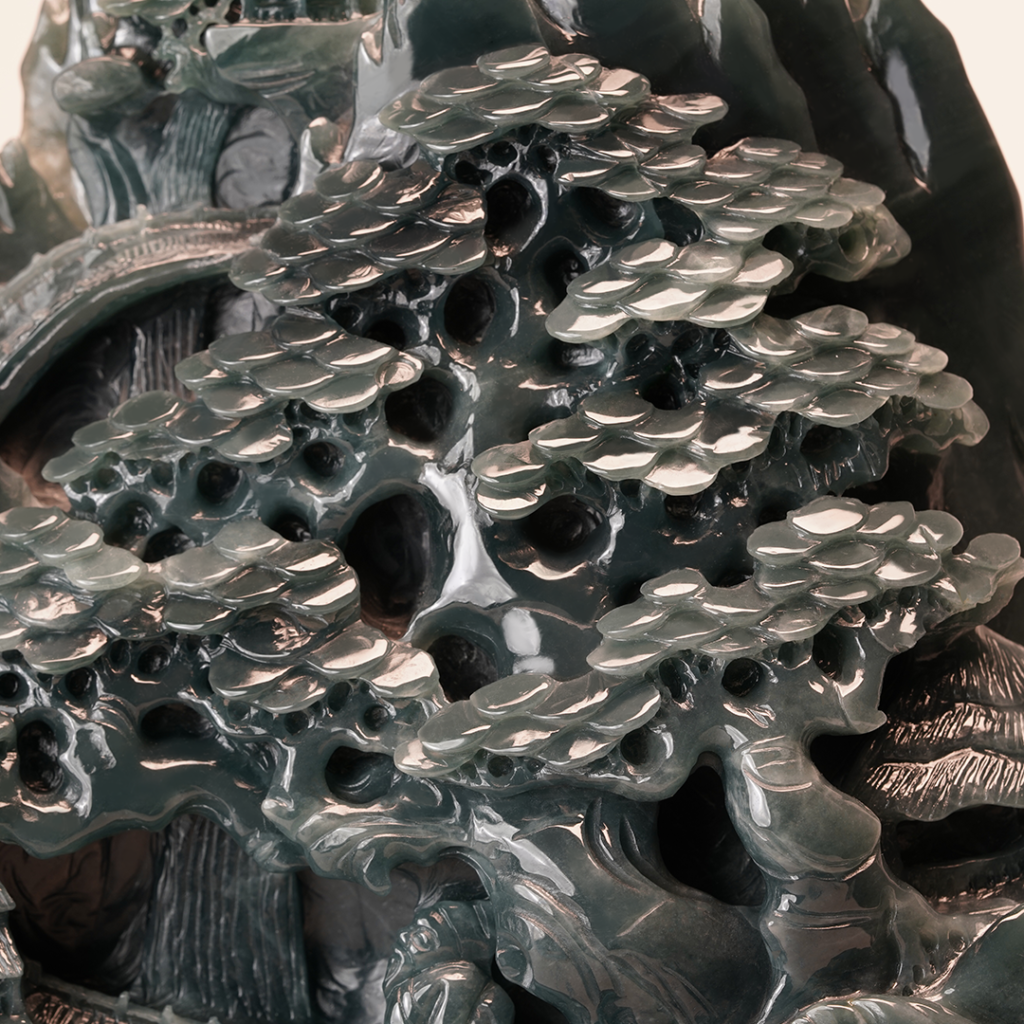 Pines are famed for being extremely long-lived. This species is known to survive for up to a thousand years, with a few rare specimens documented in excess of four thousand years. They have also adapted well to harsh conditions, with extreme temperatures and inconsistent water supply. This is a testament to their ability to overcome severe hardship and unforgiving circumstances. Furthermore, the evergreen nature of pines makes them a common symbol in Chinese art of enduring growth and development. On the Qian Long Jadeite Mountain, they represent the blessed owner’s resilience and capacity to thrive in any situations. 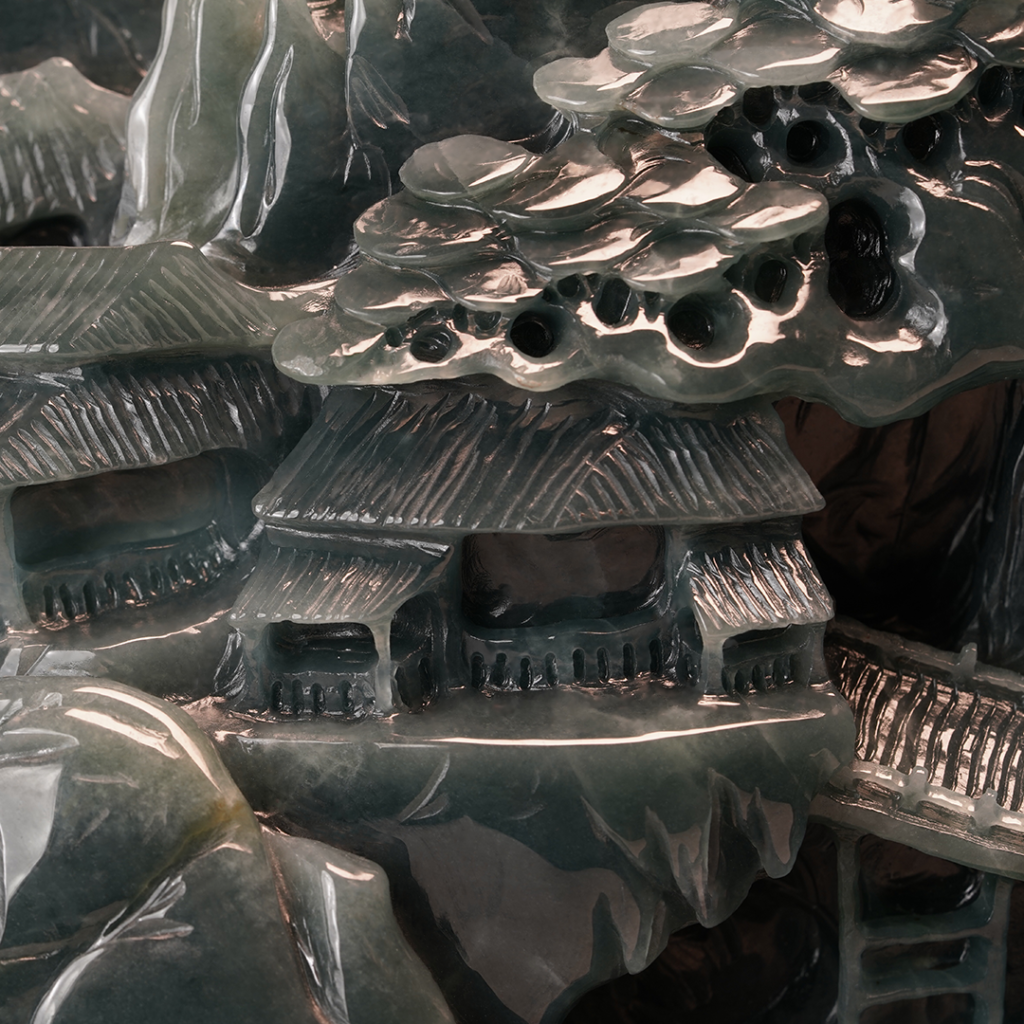 The Dragon Meridian Point (结穴点) gathers auspicious energy from the incoming Imperial Dragon, empowering the occupants to achieve wealth and prosperity. The same landform principles are being applied for the selection of the residence of Hong Kong’s wealthiest tycoon Mr Li Ka Shing. 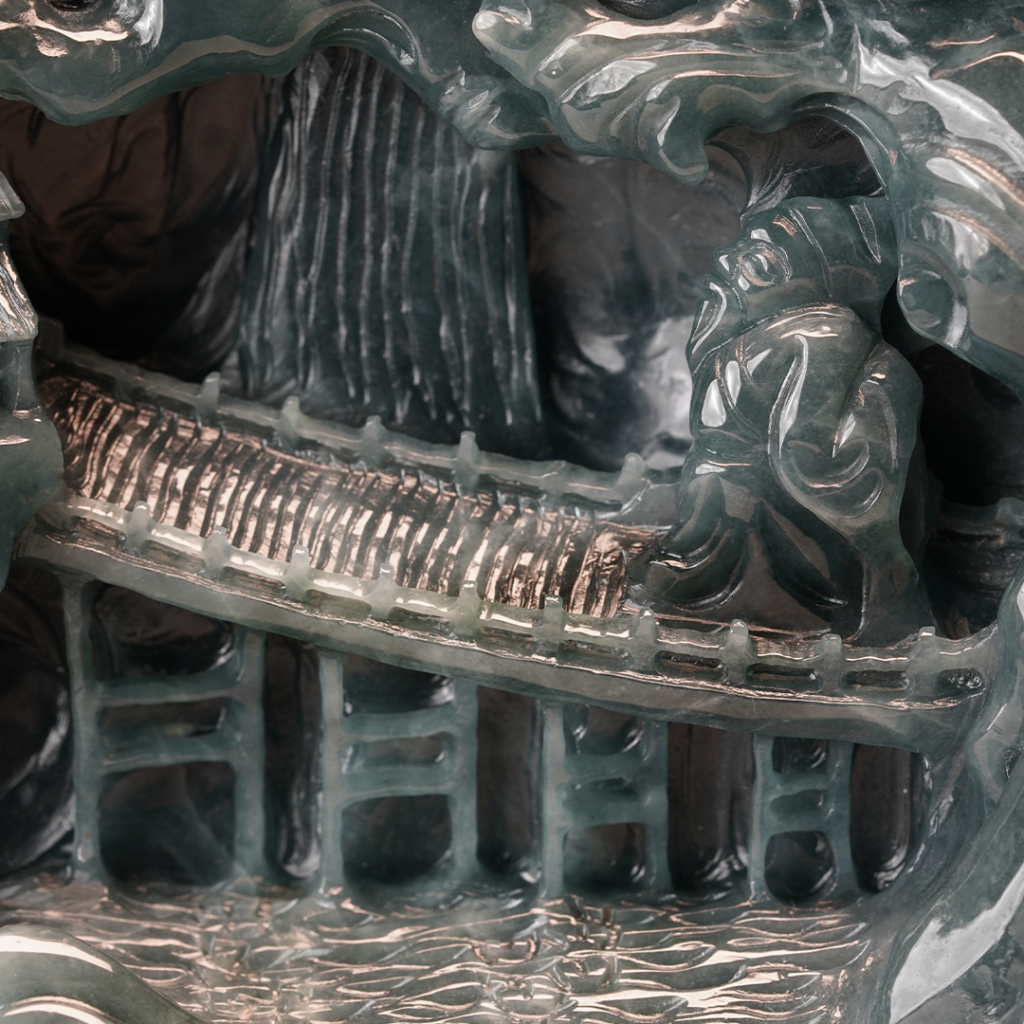 The presence of a channel of flowing water bears auspicious connotations of an inflow of wealth. This suggests smooth success in all of the blessed owner’s personal and professional endeavours.

The bridge constructed across the stream indicates adaptation to obstacles, and flourishing despite challenging circumstances. This is inspired by the Chinese idiom “水到渠成”, which suggests that given the right conditions, success inevitably follows. By negating the impediment posed by the stream, the bridge is indicative of the blessed owner prevailing over life’s challenges.

Over the years, Imperial Harvest has remained steadfastly focused on prospering generations and empowering countless individuals in their pursuit and attainment of their aspirations. This is achieved by remaining true to the Imperial Feng Shui tradition that flourished during the Qing dynasty, and by leveraging the unlimited human potential that exists in every individual.