The most widely cited verse from the principles of Imperial Feng Shui – “山管人丁，水管财” aptly summarises the importance of water star in the residential or commercial Feng Shui.

Water star (also known as the wealth star) governs wealth, opportunities and intuition. Since the Qing Dynasty, Emperor Qian Long and his team of Imperial Feng Shui masters have advocated the use of Imperial Harvest-grade crystal in the activation of the water star.

The specially commissioned team of Imperial crystal craftsmen worked very closely with Emperor Qian Long to design and conceptualise only the finest crystals the world has to offer, immortalising auspicious creatures and powerful deities with their insights.

Only the world’s finest crystals qualify to be Imperial Harvest grade – the same grade of crystal used by Emperor Qian Long and his team of Imperial Feng Shui masters. 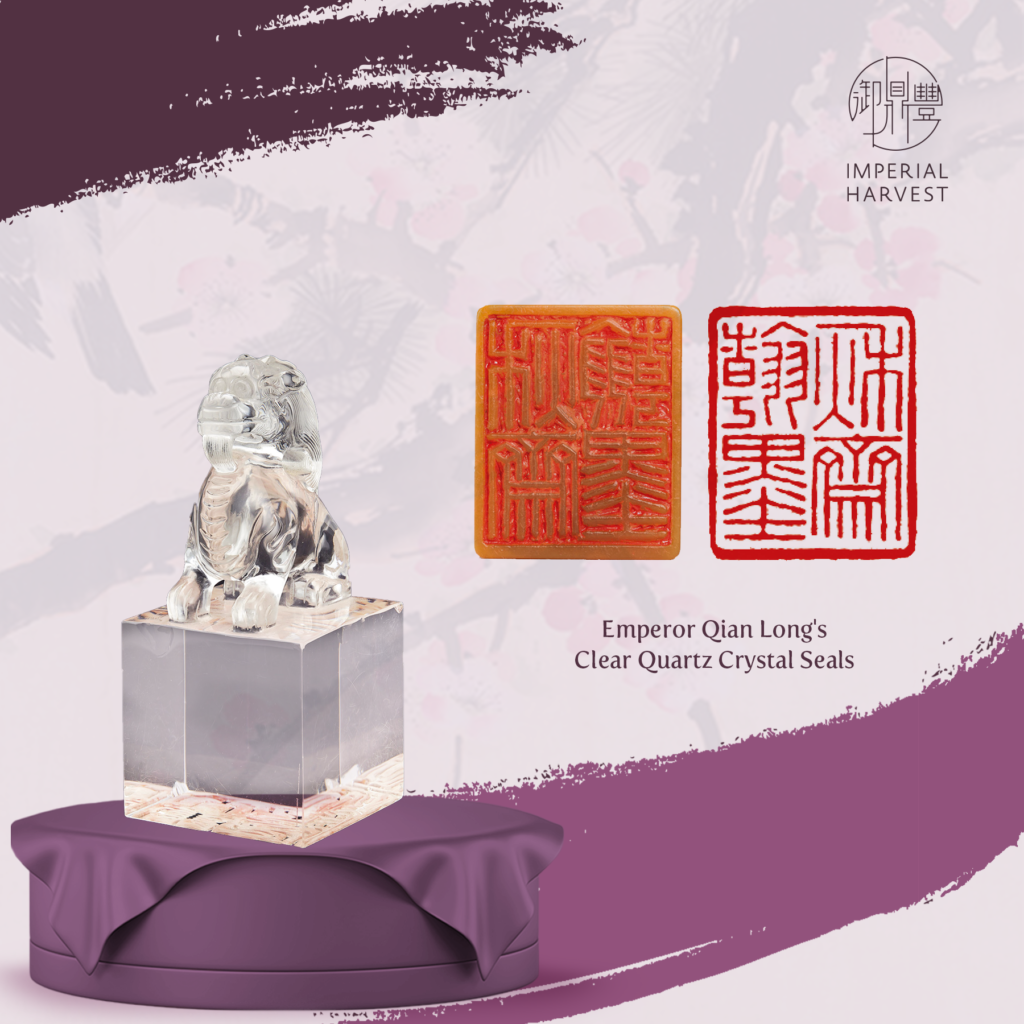 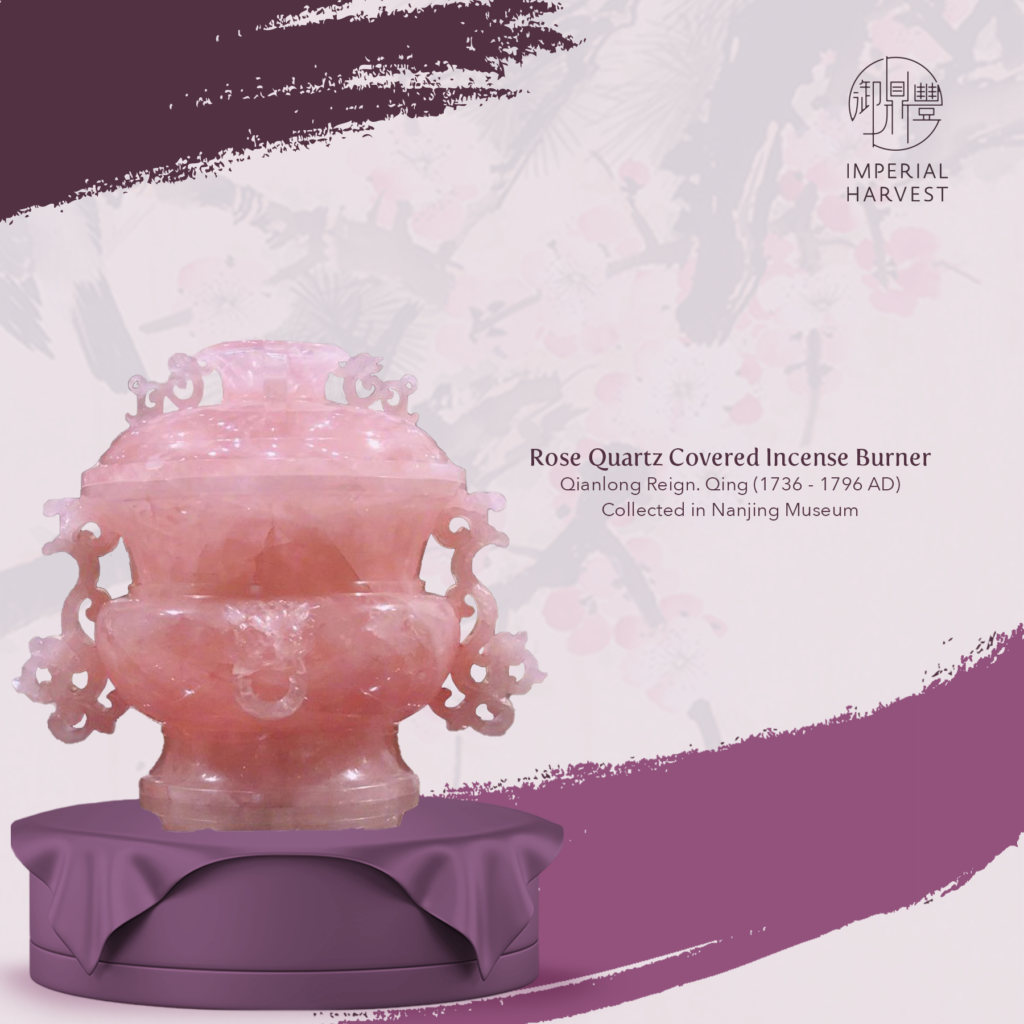 Imperial Harvest-grade crystals are cherished the moment they are on earth.

Only crystals of the finest clarity and fancy vivid colours qualify to be an Imperial Harvest-grade crystal, befitting of the standards demanded by Imperial Feng Shui.

The Imperial Harvest-grade Crystal collection is designed personally by Master David before they are masterfully crafted and blessed on auspicious date and time to amplify and multiply wealth and success.

The Imperial Harvest-grade crystal embodies the traditions of Imperial Feng Shui – only the rarest and finest crystals are used to activate the water star in your home, office, hotel or shop. 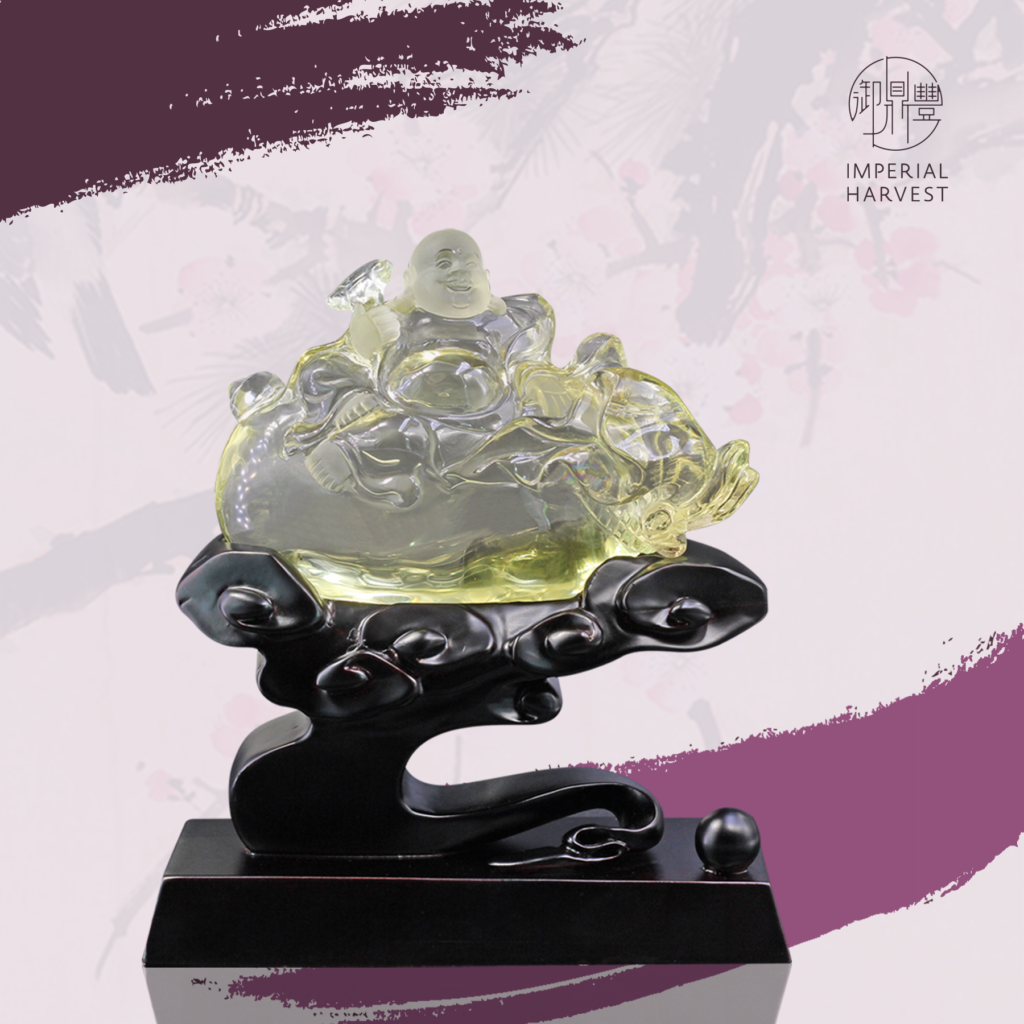 Every crystal from Imperial Harvest is unique and one-of-a-kind.

Master David works with mine owners from Brazil to select raw crystal blocks that complies with strict GIA certification standards – widely known as the three Cs, namely the Clarity, Colour and Cut.

Because they are formed deep within the earth, under extreme heat and pressure; virtually all crystals contain “birthmarks”; small imperfections inside the crystals (called inclusions), or on its surface (called blemishes).

There are nine different scales of clarity for a crystal and Imperial Harvest only applies the highest top three tiers of crystals in its collections. 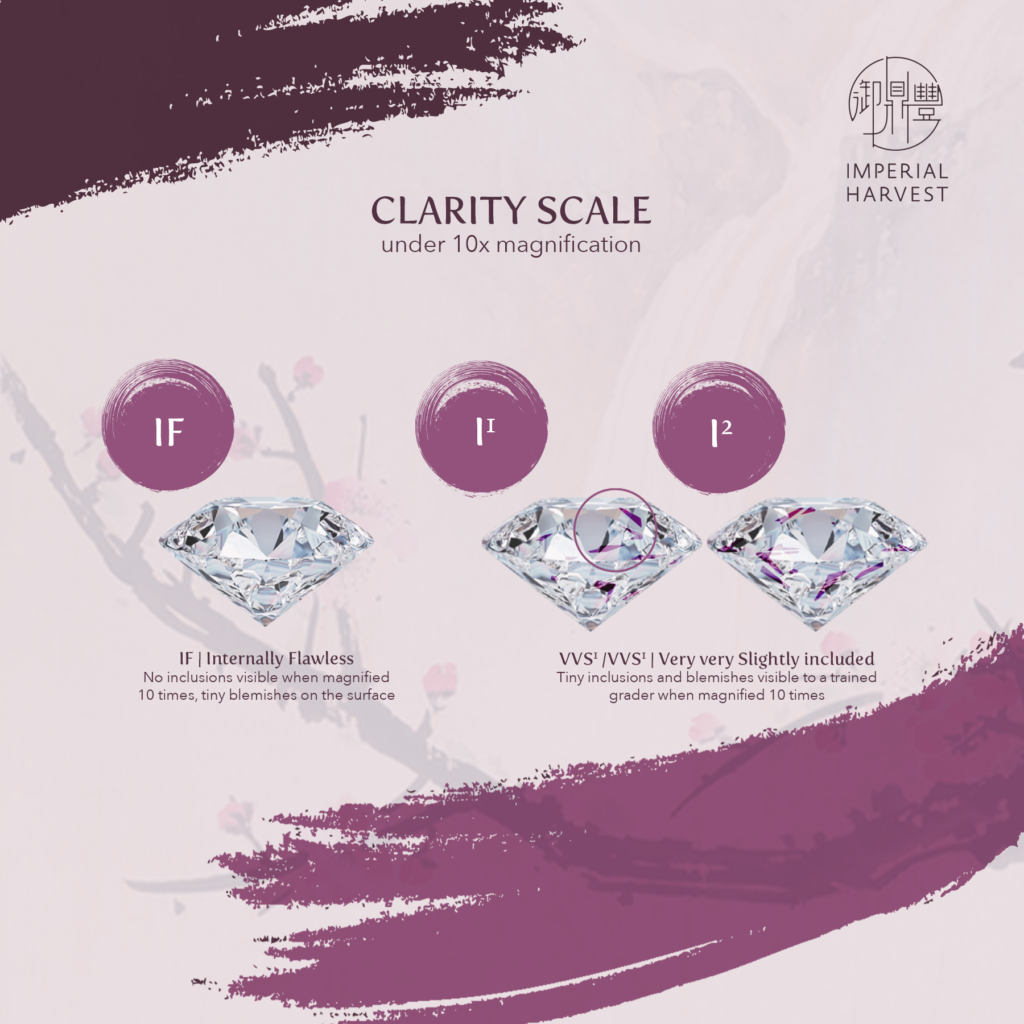 In the traditional grading, GIA gemological institutes grade crystals based on three levels of clarity scale: transparent, translucent and opaque. Imperial Harvest sets a new benchmark and offers only transparent crystal and grades her crystal collection on a stricter scale of clarity.

No inclusions, imperfections are only visible to a skilled grader using 10x magnification. These crystals are extremely rare and less than 0.01% of crystals are rated Internally Flawless 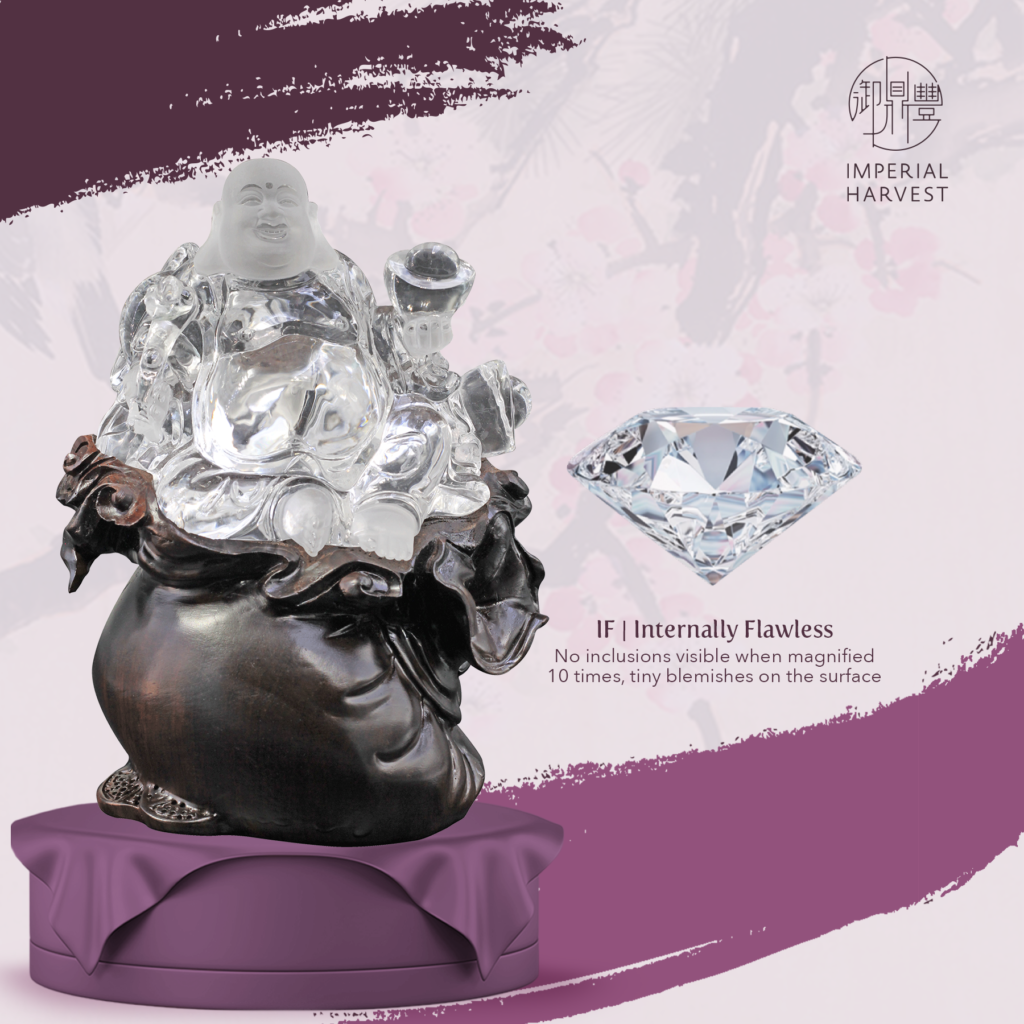 No inclusions or blemishes are visible to a skilled grader using 10x magnification.

For VVS1, the inclusions are invisible to the naked eye, appearing identical to the higher grades unless viewed under 10x magnification by a skilled grader. 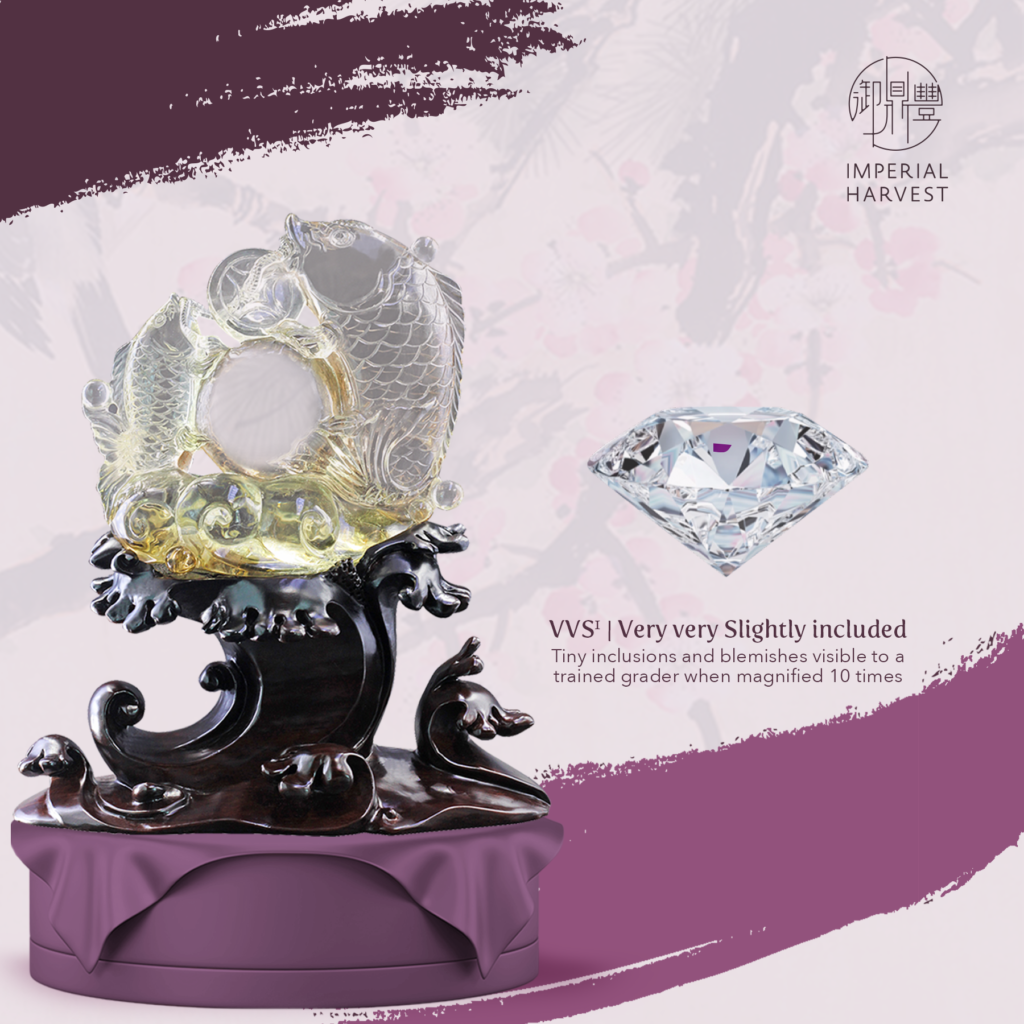 Inclusions are difficult for a skilled grader to see under 10x magnification. 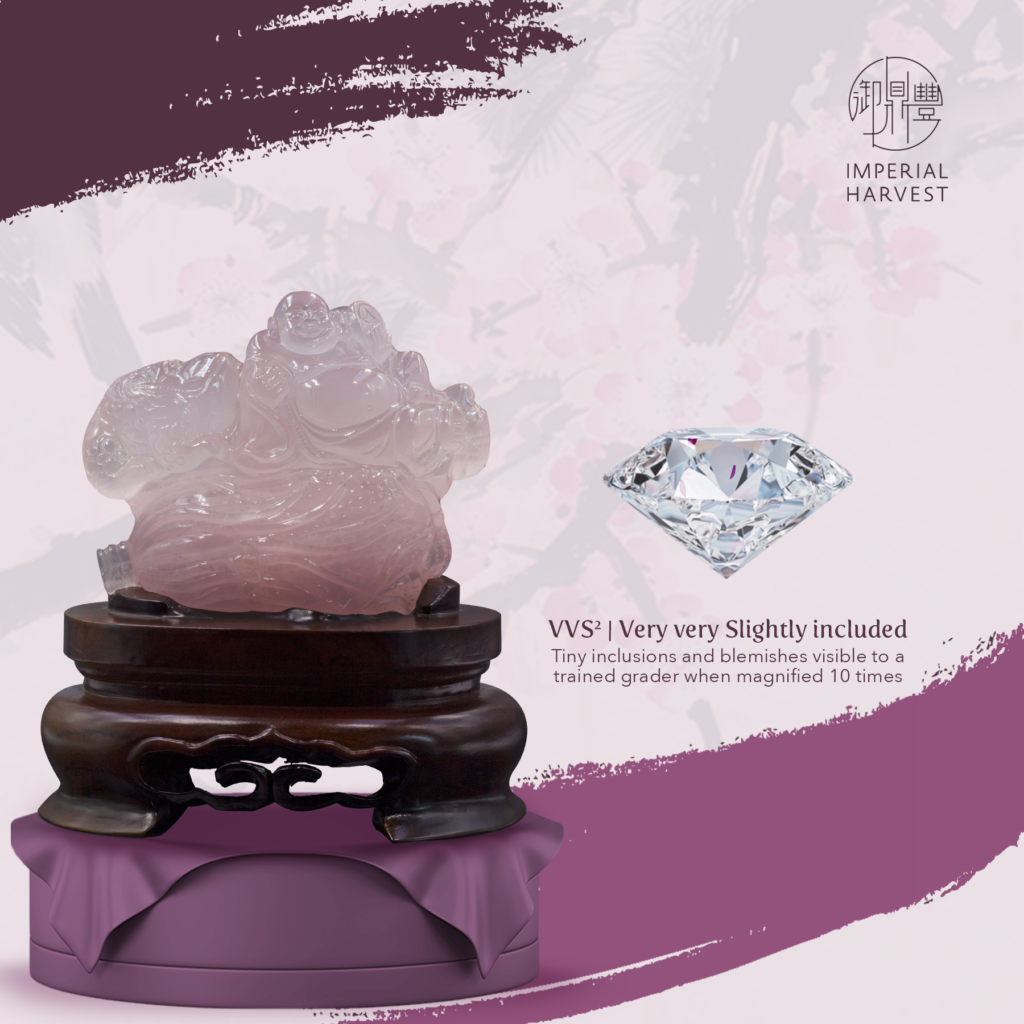 Inclusions are easier for a skilled grader to see under 10x magnification than VVS1.

Imperial Harvest ruthlessly rejects opaque or translucent crystals. Only crystals with the highest order of clarity and most vivid colours made it to our galleries.

Inferior crystals are characterised by impurities and poor craftsmanship. 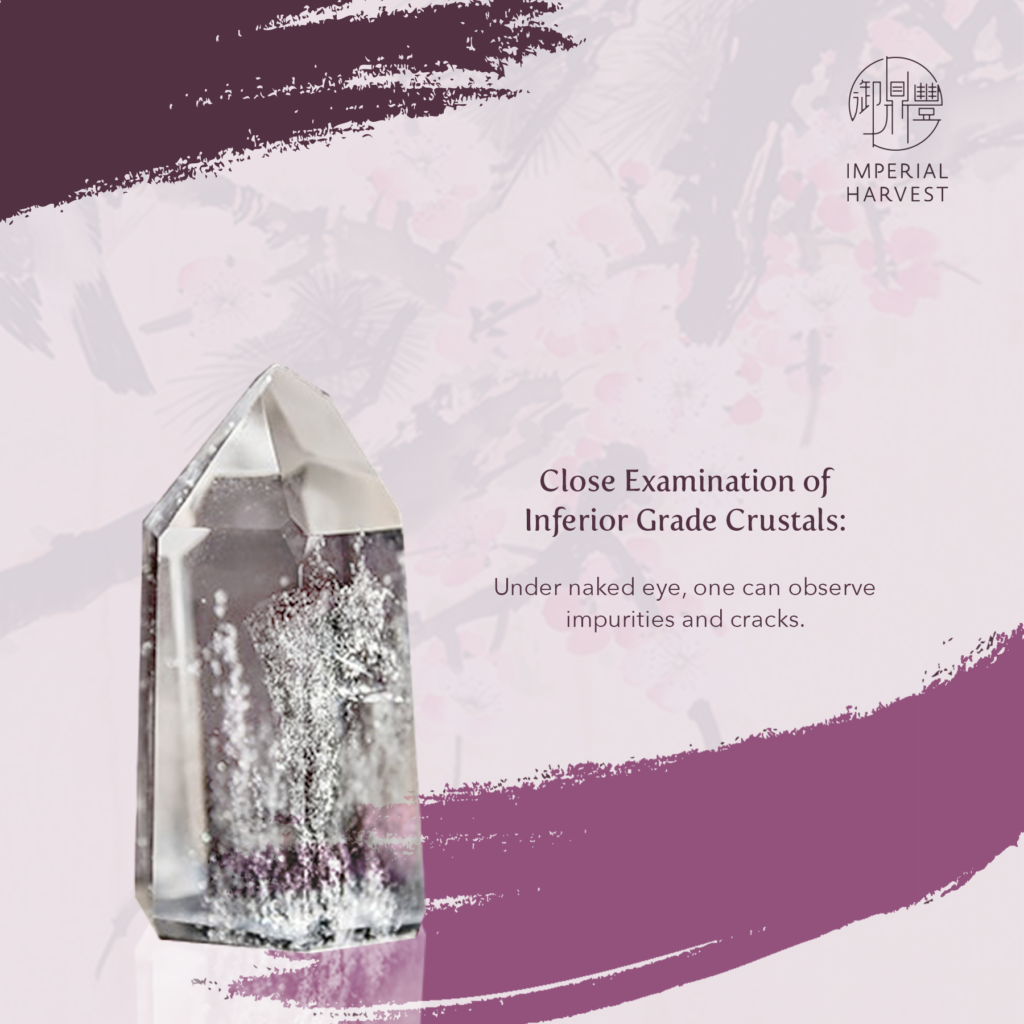 Imperial Harvest-grade Crystals are all-natural, meaning they have never been artificially treated to remove any blemish or to alter the colour.

The Gemological Institute of America (GIA) colour scale for crystal is the leading industry standard of crystal colour grading. Every Imperial Harvest-grade Crystal has been assigned a colour grade by the GIA in a viewing environment specially designed to eliminate colour from surrounding surfaces as well as the light source itself. This allows the colour of the crystal to be accurately measured. Minor differences in crystal colour detected in this environment are very difficult if not impossible to detect in a normal environment.

There are six categories on the GIA crystal chart, with colour grades that range from absolutely colourless to light in colour.

Crystals rated from D are completely devoid of colour and extremely rare, whereas F- and G- graded colour crystals are near colourless, which are also very rare. Z-graded graded crystals have the most prevalent faint yellow or brown hue. By way of explanation, the later the alphabet (Z-), the lower the colour grade, the more noticeable is the faint yellow hue.

These crystals are known as Naturally-Occurring Coloured Crystals. Only one in every 10,000 crystals possesses brilliantly natural colours. Coloured crystals are graded completely on a separate colour scale by the GIA. Intensely vivid crystals are extremely rare and valuable.

Pure quartz, traditionally called rock crystal or clear quartz, is colourless and transparent. 99% of the clear quartz is tainted with impurities and hues of faint colours.  These clear quartz crystals are treated using heat or gamma-irradiation to induce colour where it would not otherwise have occurred naturally. Imperial Harvest only offers the top 1% of the world’s natural clear quartz crystals.

Natural citrine is one the rarest crystals in the world as 97% of the citrine crystals available in the market are heat-treated amethysts or smoky quartz, false-fully altered to parallel the intense colours of a natural citrine. Imperial Harvest offers only natural citrine that derives its brilliant fancy yellow colour from natural ferric mineral present in quartz.

The smoky colour is a brown, translucent version of quartz, deriving its colour from a result of natural irradiation of silicon dioxide that creates the free silicon. Smoky quartz crystals  can range from almost completely transparent to an almost opaque natural brown smoky colour. 99.5% of the smoky quartz in the market are opaque or semi-translucent which are extremely inferior. Imperial Harvest only offers natural smoky quartz from internally flawless-grade to VVS2 quality. 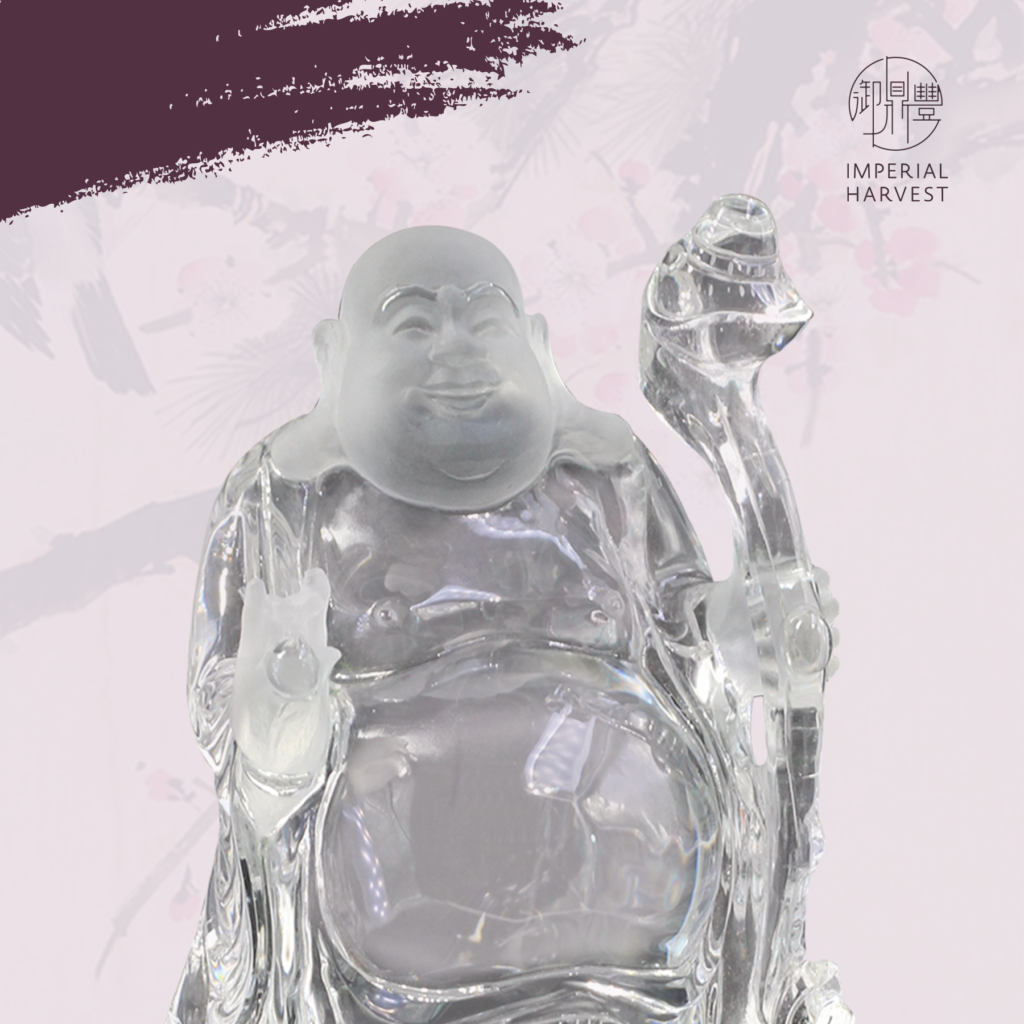 A crystal owes most of its beauty to nature, but it is the shape and skillfulness of the polished crystal that determines that all-important wow factor. 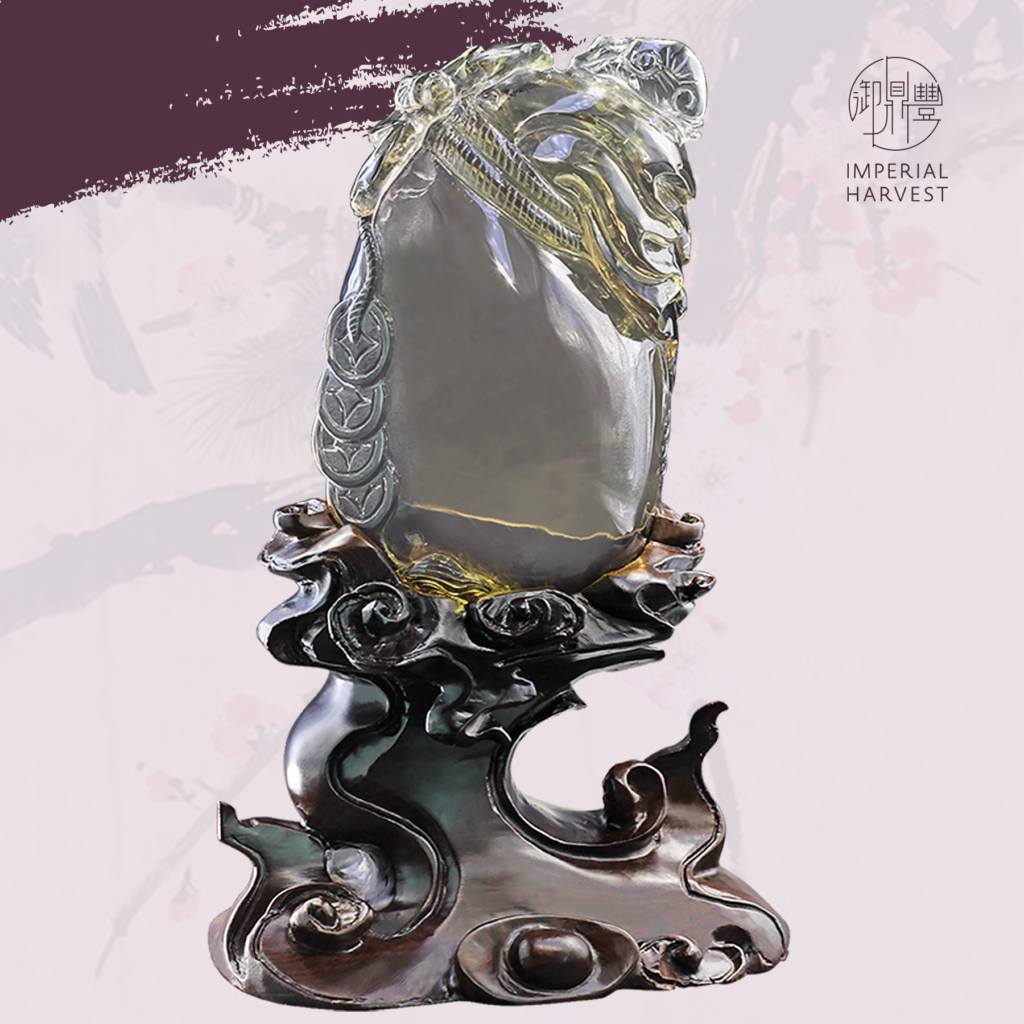 In accordance to Imperial Feng Shui, crystals fashioned into auspicious designs must be deftly created to allow maximum light return from the surface of the crystal, which maximizes and redirects the earthly energies from the crystal into its surroundings, providing nearby occupants with auspicious energies. The beauty of a crystal depends more on craftsmanship than any other factor, as the energies of the crystal is augmented according to the crystal’s design. 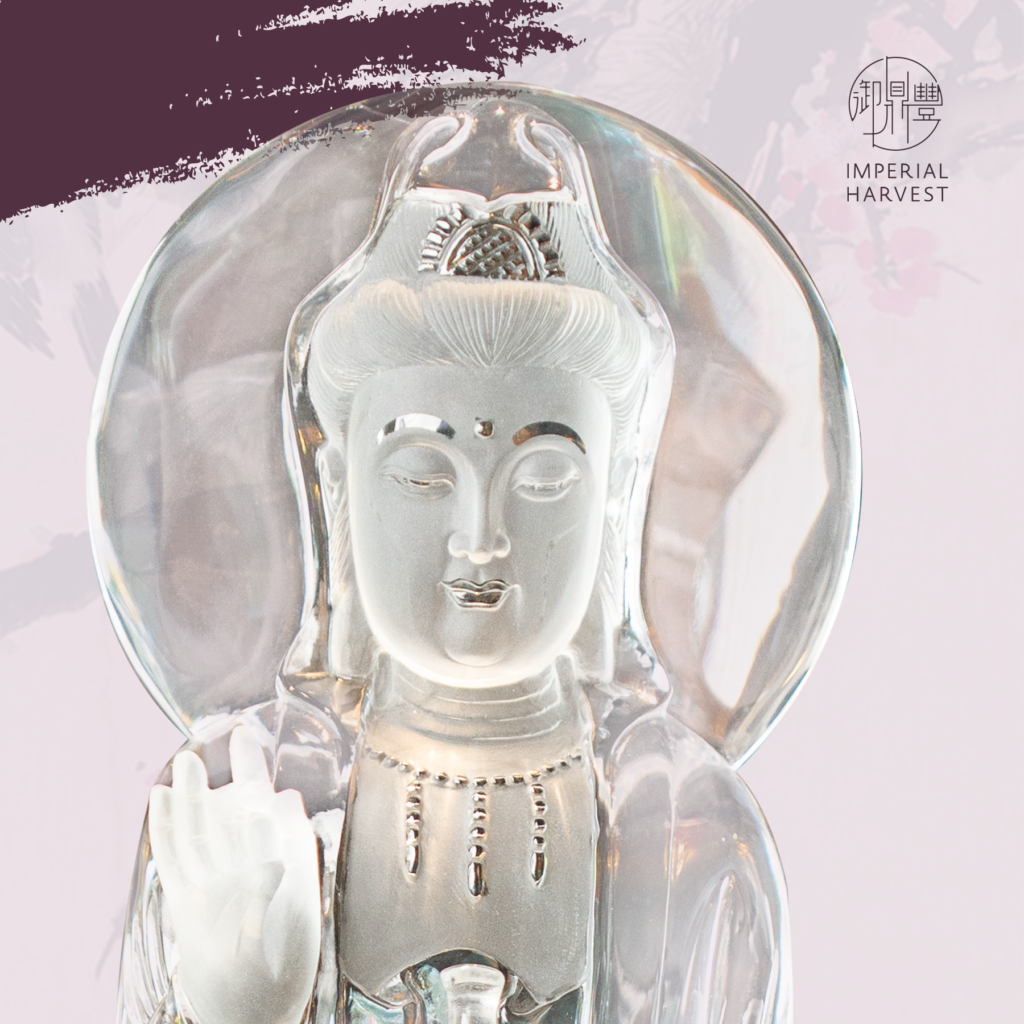 The craftsmanship not only determines its overall aesthetics but also its strategic purpose. Every Imperial Harvest crystal is cut and carved accordingly to Master David’s design sketches. After determining and finalizing the sketches, they are sent to our workshops where our master craftsmen can begin carving out the designs. 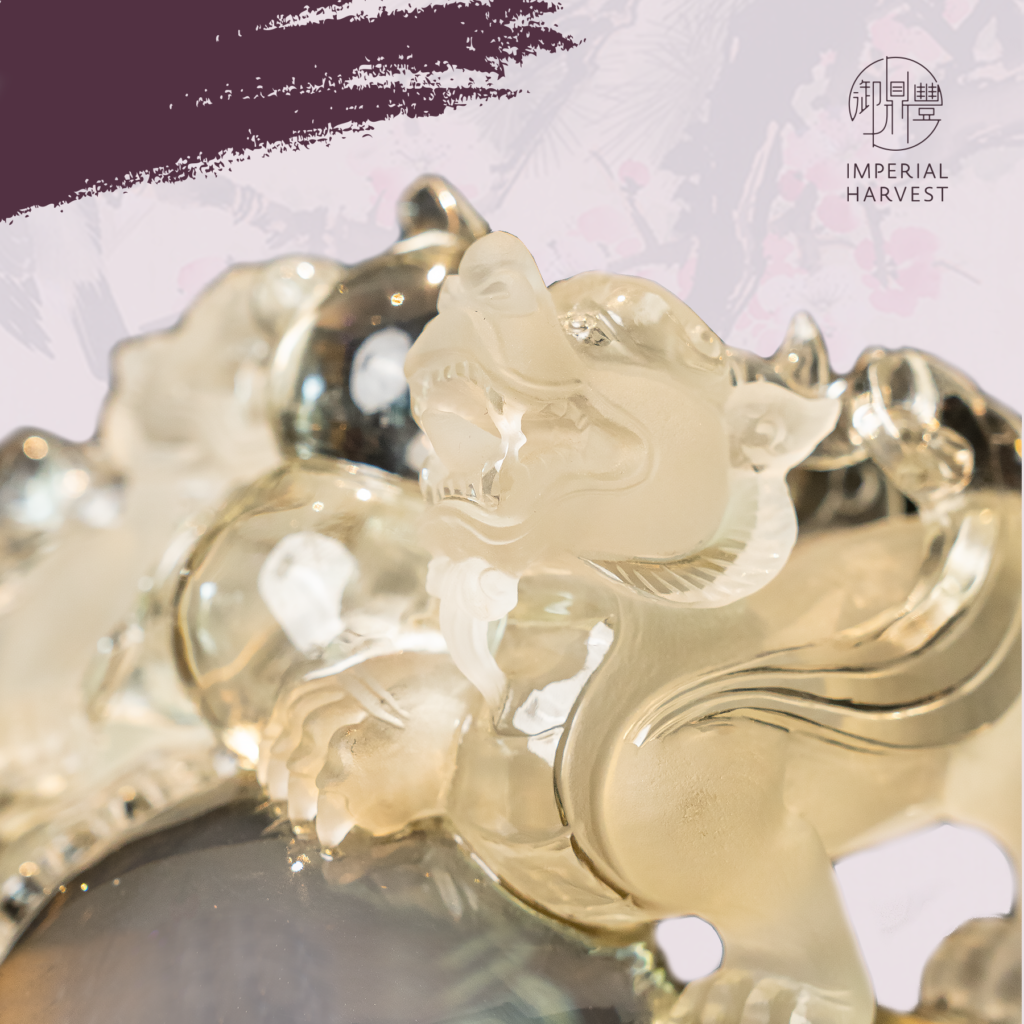 Imbued with expertise and immaculate attention to detail, the entirety of the process is done by hand by our artisans using traditional methods acquired from generations before. This results in impeccable detailing on the Imperial Harvest-grade crystals – which no machine on Earth could ever replicate. 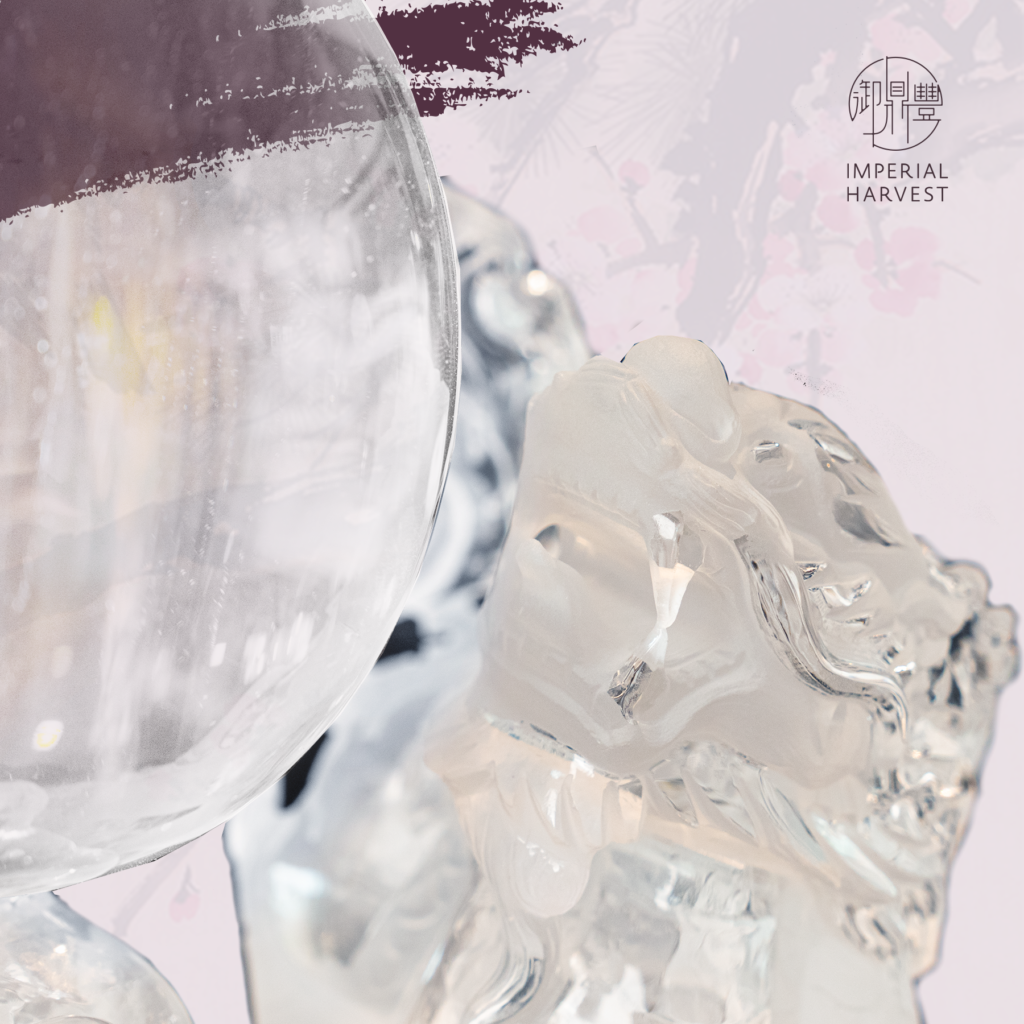