Posted by Imperial Harvest on 16 October 2020

Millions of visitors flock to the Temple of Heaven in Beijing every year, drawn by its mystery, mystique and magnificence. Larger than the Forbidden City, the vast Temple of Heaven is still the largest building in Beijing, and known as the home of Imperial Fengshui.

The Temple of Heaven was at the centre of imperial rituals and ceremonies for centuries.

Chinese Theology and the Cosmic Order 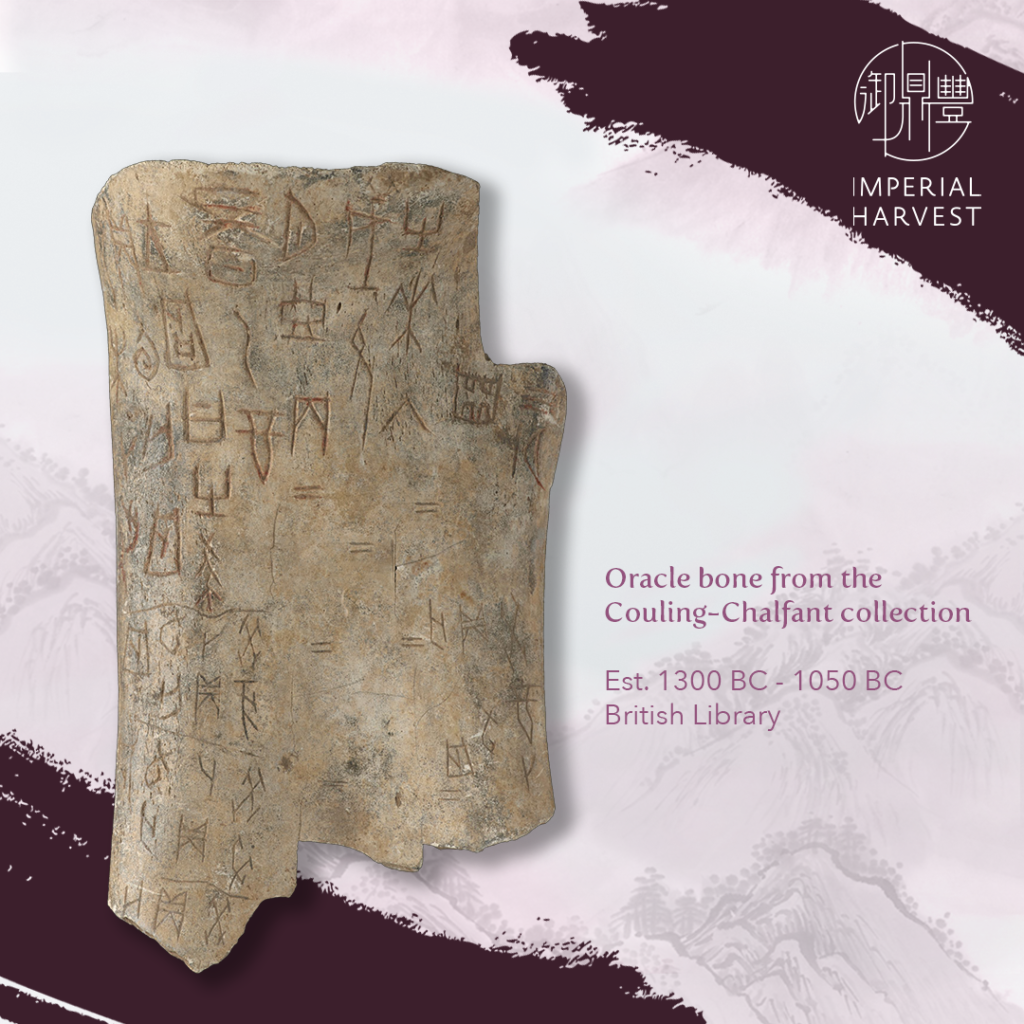 The earliest records of the Chinese civilisation were the oracle bone inscriptions carved into tortoise shells or animal bones for divination during the Shang dynasty. Even then, we observe a well-developed understanding of Chinese theology that would serve as a foundation for society for thousands of years.

At the core was the idea of Heaven – an eternal force that regulated all of nature.

The king (and later emperor) was the “Son of Heaven” and was the representative of Heaven on Earth. The legitimacy of his rule is bestowed directly from Heaven as the “Mandate of Heaven”, and thus commanded reverence from the people. 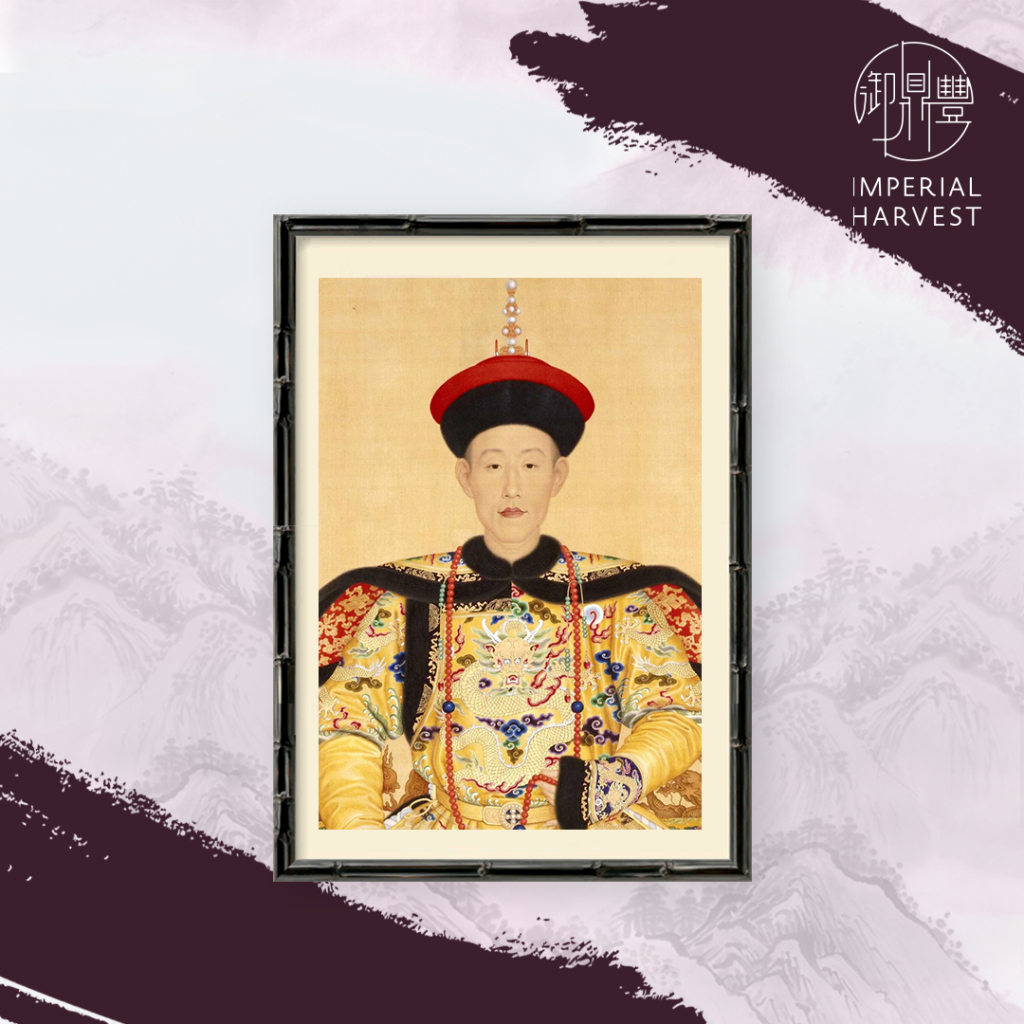 But this also meant that the king had responsibilities to create and maintain order, to protect his people from all forms of calamity, and to govern in accordance with the cosmic laws. This was summed up analogously by Confucius who said “To rule by virtue is like the North Star – it dwells in its place whilst commanding the homage of the multitude of other stars revolving around it.”

In the human realm, ancestors represented Heaven (the “utmost ancestral father”) and had the power to produce and influence living beings on Earth. This formed the basis of ancestor veneration, a way for the living to connect with Heaven.

Rites play an important role. They help to maintain the cosmic order and align the forces of Heaven, Earth, and Humanity. They maintain the balance of qi between worshippers and the god, and between ancestors and descendants. As is the Confucian tradition, a meticulous observance of protocol is of the utmost importance. 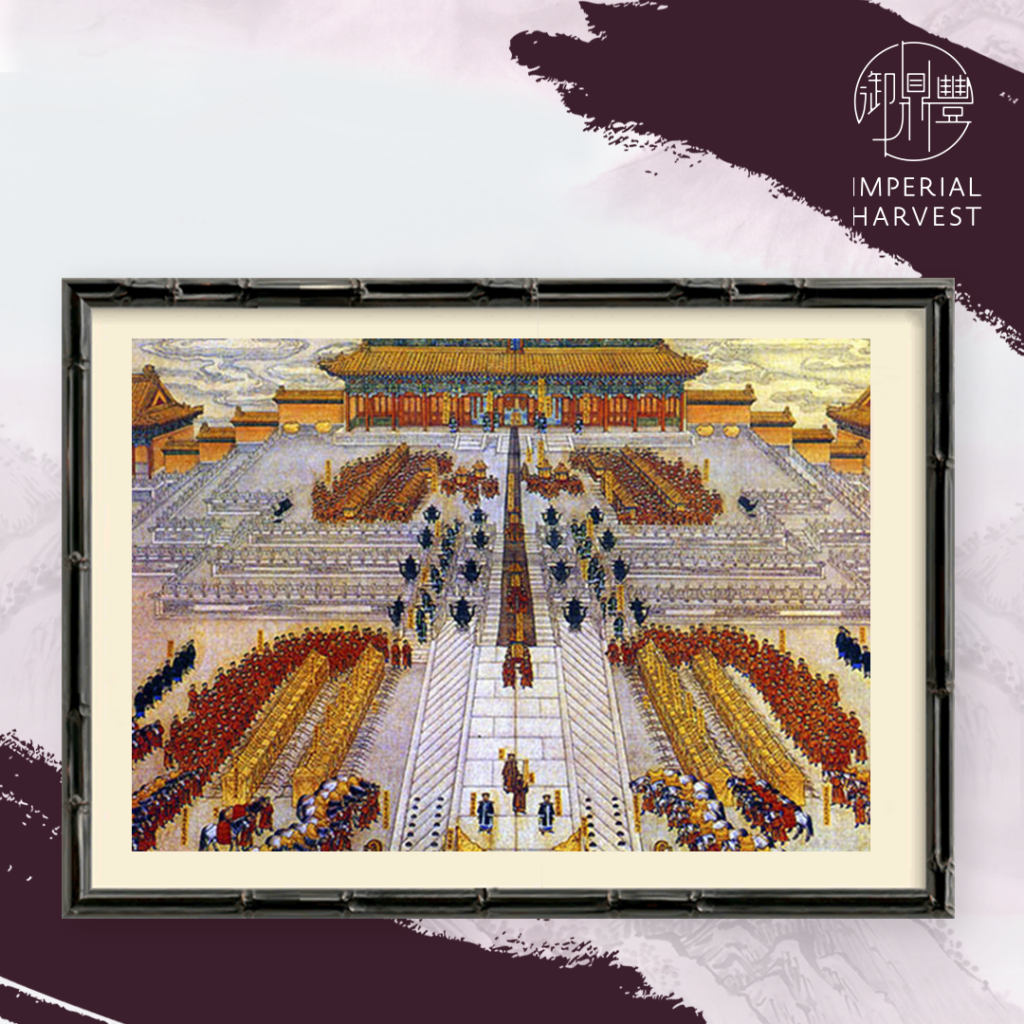 There are five types of rites prescribed by the ancient Rites of Zhou — auspicious rites (offerings to Heaven, Earth, and spirits), inauspicious rites (e.g. funerals and crop failures), celebratory rites (e.g. weddings and banquets), hosting rites (receiving audiences at royal court), and military rites (e.g. declaring war, dispatching armies, and triumphant returns). Auspicious rites were the most important, considered “great affairs of the state” and performed solely by the Chinese emperor in his role as the Son of Heaven. 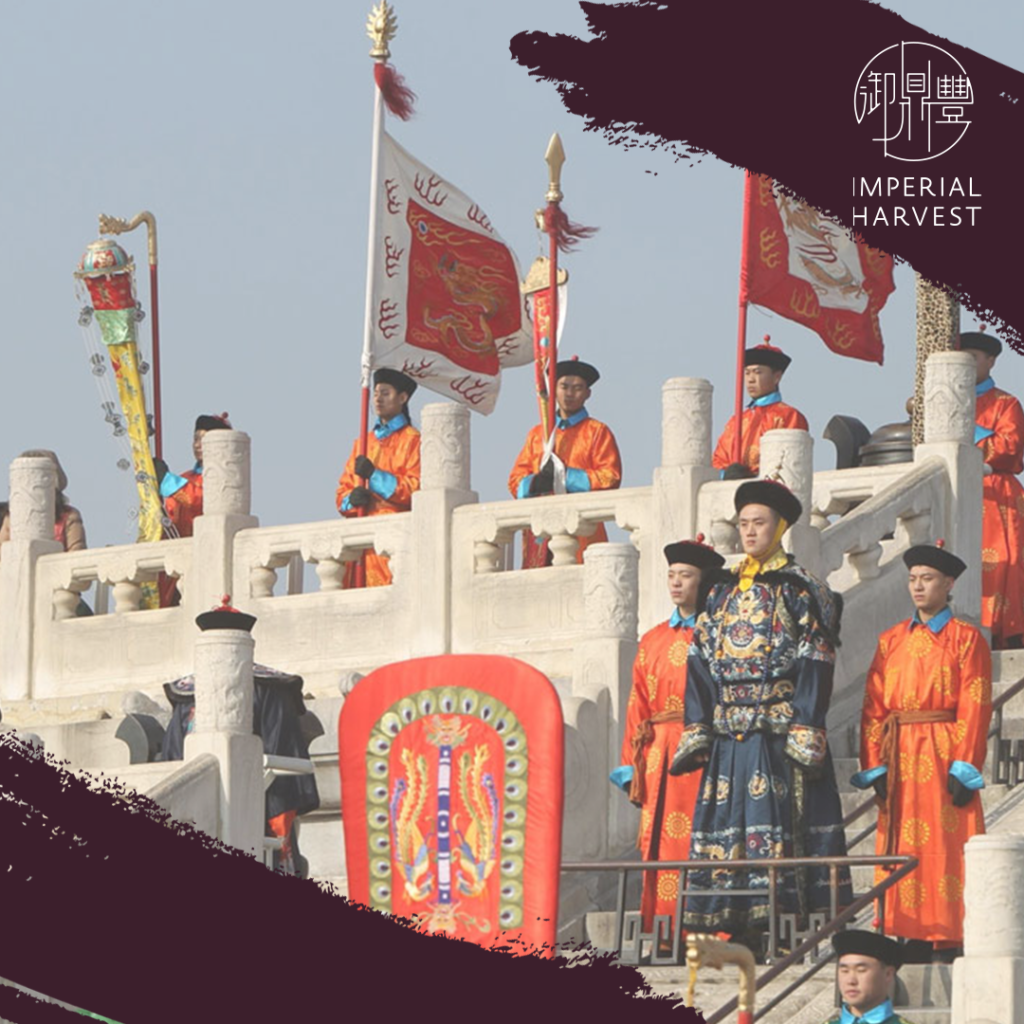 To fulfil his responsibilities, the emperor conducted three ceremonies every year at the Temple of Heaven. On the first Xin day stem of the first lunar month (正月上辛日), he would pray for abundant harvest in the Hall of Prayer. On the Summer solstice, the emperor would pray for rain at the Circular Mound Altar.

But the most important ceremony was the worship of Heaven, held on the Winter solstice. This was to thank Heaven for a good harvest that year. It was believed that even the smallest mistakes would bring bad luck to the empire, and so everything had to be perfect.

The day before the Winter Solstice, the emperor would leave the Forbidden City and travel through Beijing to the Temple of Heaven in a yellow Imperial covered sedan chair. At its height during the reign of Emperor Qianlong, there were 3,500 officials forming the guard of honour stretching several miles. There were elephants, horse chariots, and huge banners and flags. 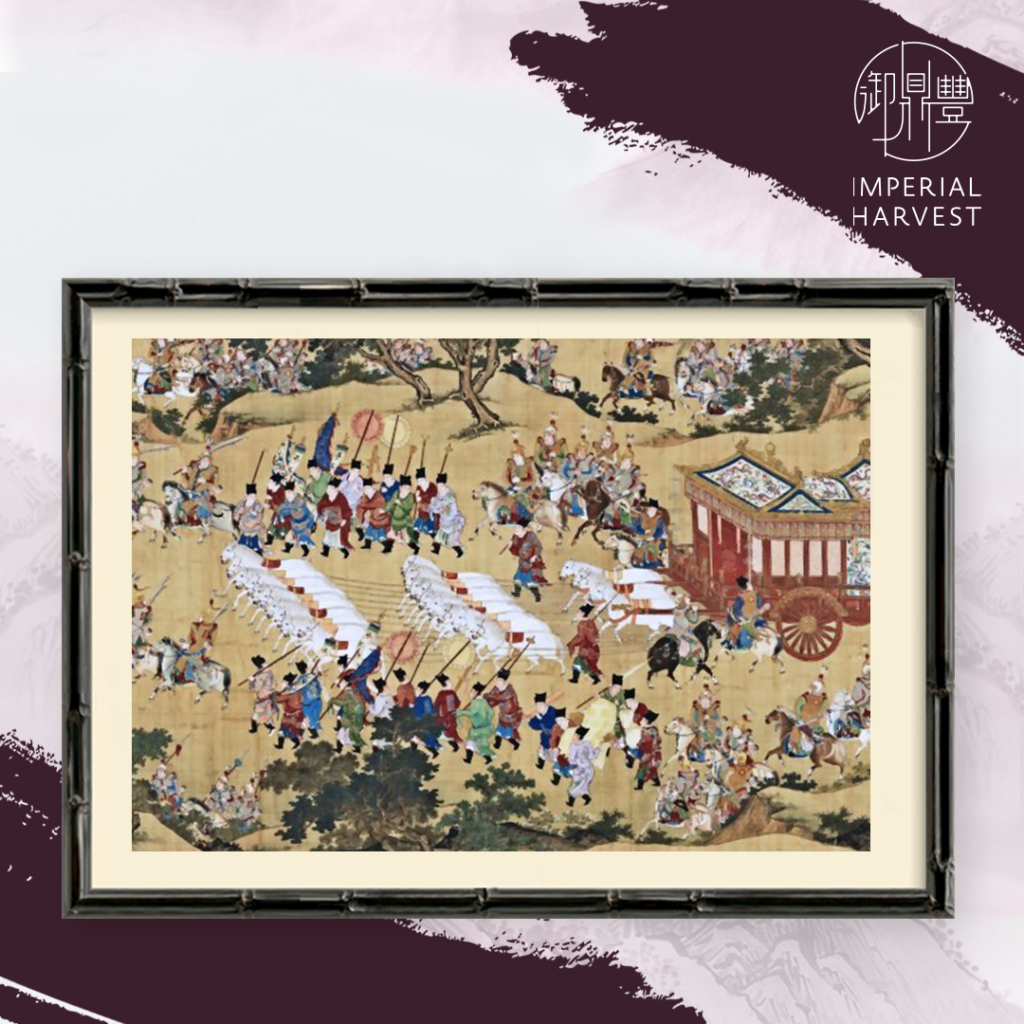 But this was no celebration. It was a most sacred procession which took place in almost complete silence. Commoners were not even allowed to witness this, and were ordered to close all doors and windows and remain indoors.

When he reached the Temple of Heaven, the emperor would conduct a ritual at the Imperial Vault of Heaven and inspect the preparations (e.g. sacrifices in the Divine Kitchen). He would then retire into the Palace of Abstinence to pray, fast, and meditate. This was to purify himself in preparation for the next day.

The ceremony began at four o’clock in the morning of the Winter Solstice with the striking of a large bell – the Bell of Supreme Harmony – at the bell tower of the Palace of Abstinence. The emperor would enter the grounds of the Circular Mound Altar dressed in ceremonial attire. 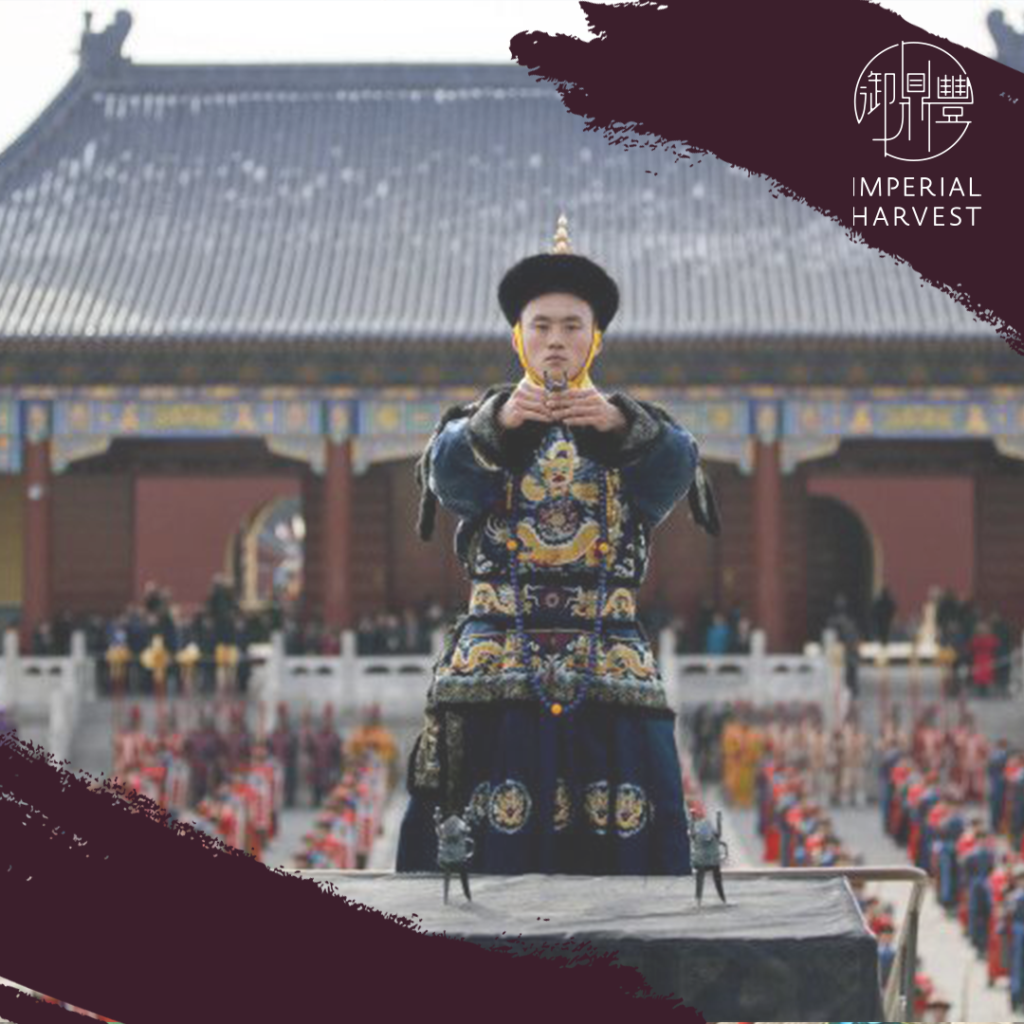 Odd numbers were considered heavenly. And the highest single-digit odd number, 9, represented eternity and imperial authority. As such, the number 9 could be found throughout the design of the Circular Mound Altar. In addition, the carefully choreographed ritual had 9 parts to it.

Pine tree boughs are burned in twelve iron stoves arranged around the altar. These created scented smoke that drove out evil and brought prayers up to heaven. To welcome the emperor God, the ritual officer sings “The Burntwood Meets the Emperor God” (燔柴迎帝神) to the music of “Welcoming the Emperor God”. The emperor then ascends the first flight of stairs up the Altar, comprising nine steps, and offers incense.

The emperor ascends the second flight of stairs, comprising nine steps, and offers jade and silk. The Jingping (景平) chapter of the music plays.

The emperor ascends the final flight of stairs, comprising nine steps, and offers a sacrifice of cattle. The Xianping (咸平) chapter of the music plays.

The emperor kneels at the altar, offers wine, before returning to his praying position. The Fengping (奉平) chapter of the music plays and a martial dance is performed with shields (representing temperance) and axe weapons (representing strength). Standing on the Heart of Heaven stone, the ritual officer then recites prayers to Heaven. 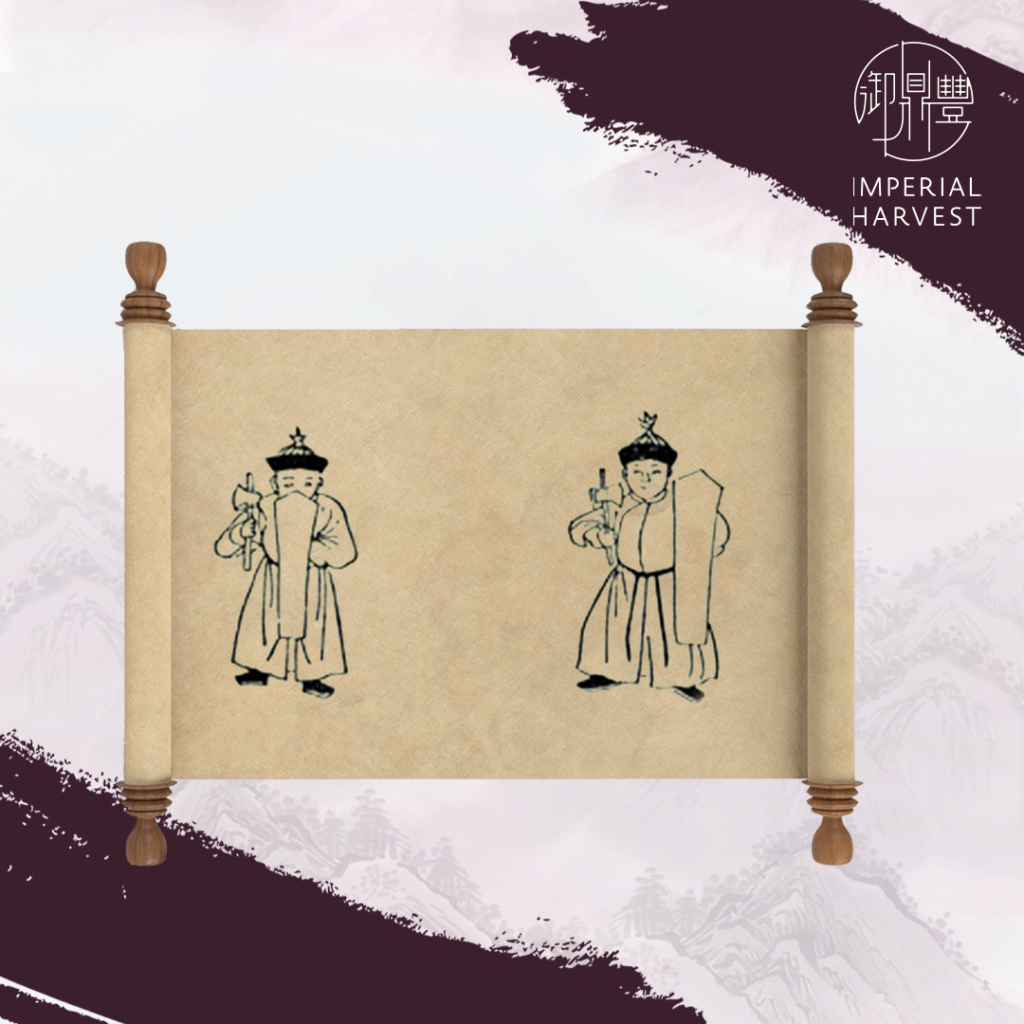 The emperor kneels at the altar, offers wine, before returning to his praying position. The Jiaping (嘉平) chapter of the music plays and a civil dance is performed with the use of long feathers from mountain pheasants. Unlike the first part of the prayer, there is no recital. 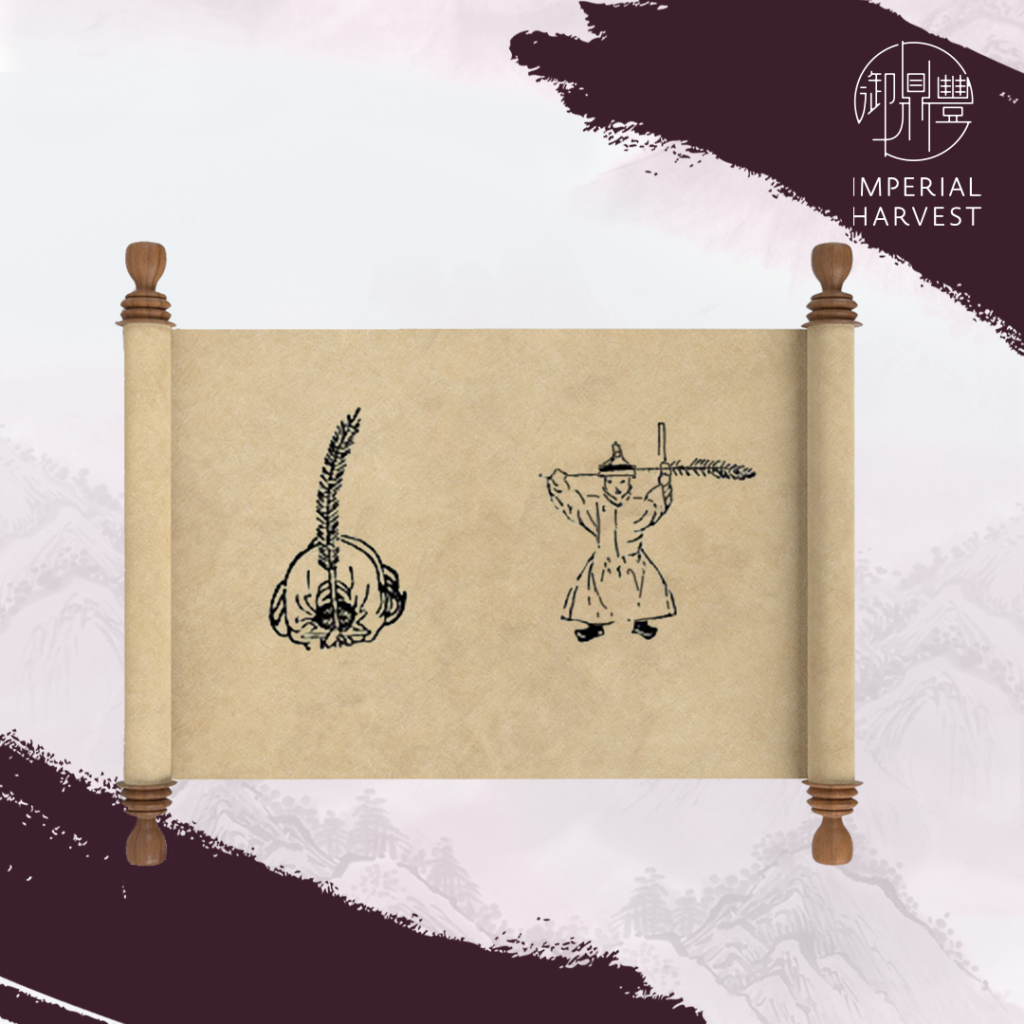 The emperor makes a final wine offering. The Yongping (永平 – Eternal Peace) chapter of the music plays and a civil dance is performed with the use of long feathers from mountain pheasants.

The Xiping (熙平) chapter of the music plays. Sacrifices are withdrawn from the altar.

8. Send-off for the emperor 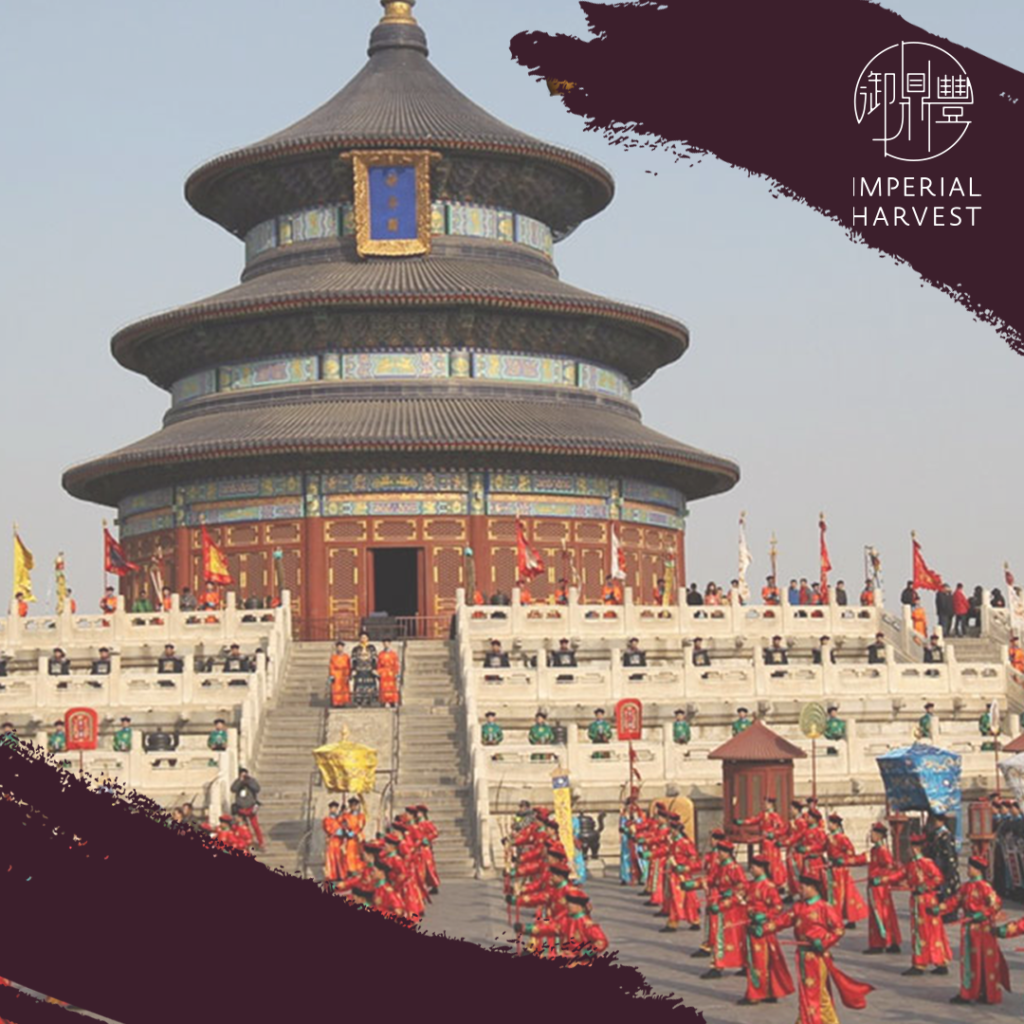 9. Inspection of the burning of offerings

The emperor inspects the burning of sacrifices. The Youping (佑平) chapter of the music plays. He returns to the Forbidden Palace in a procession and the ceremony officially ends.

The Bliss of Harvest ring is arguably our most iconic collection, paying homage to the famous Hall of Prayer for Good Harvests in the Temple of Heaven. It exemplifies the historic links between Imperial Harvest and our Imperial Feng Shui traditions. 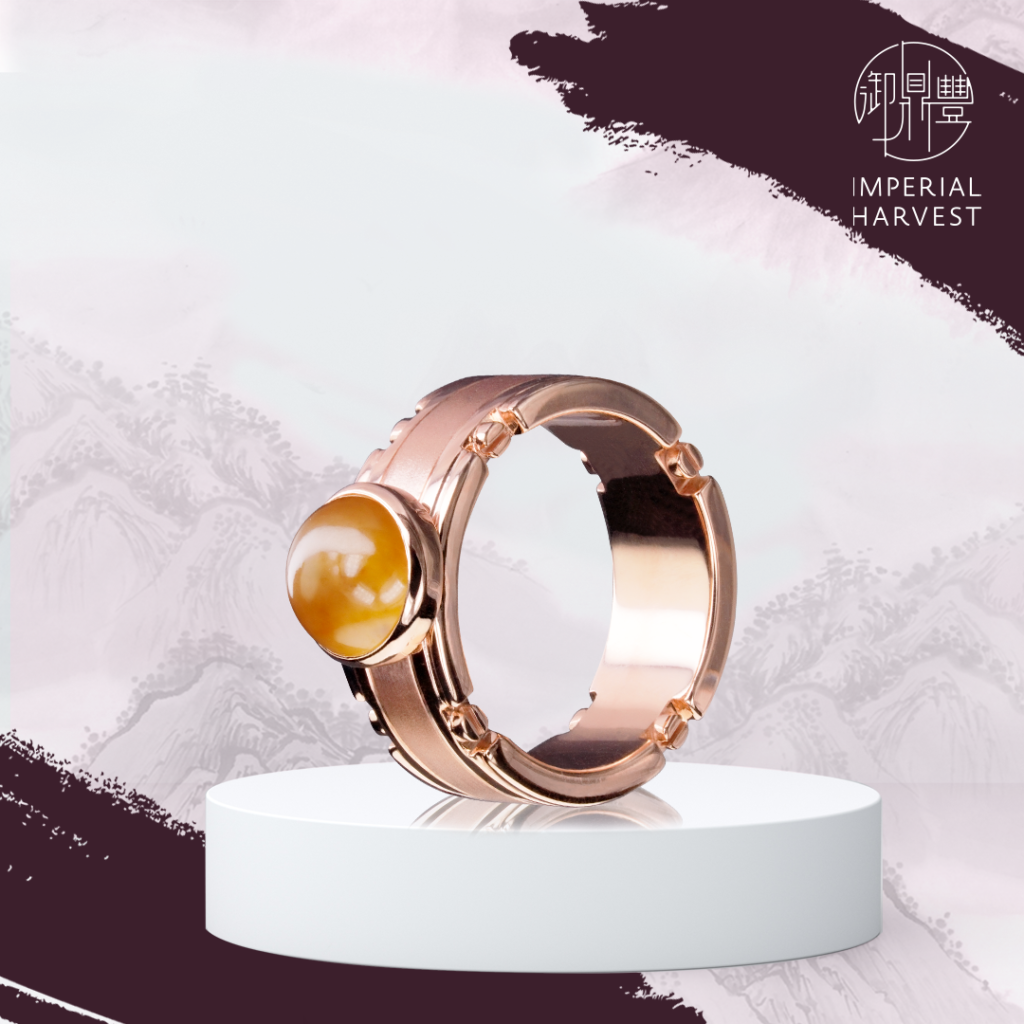 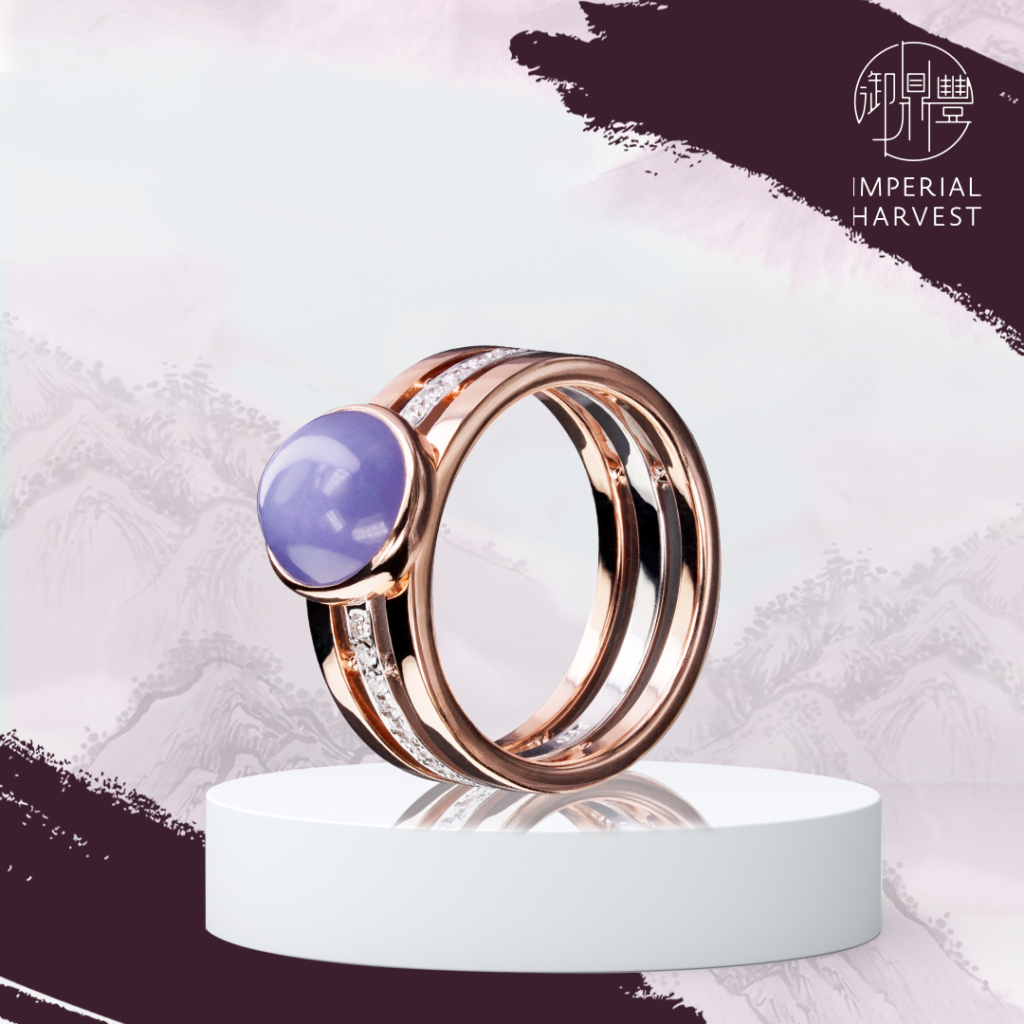 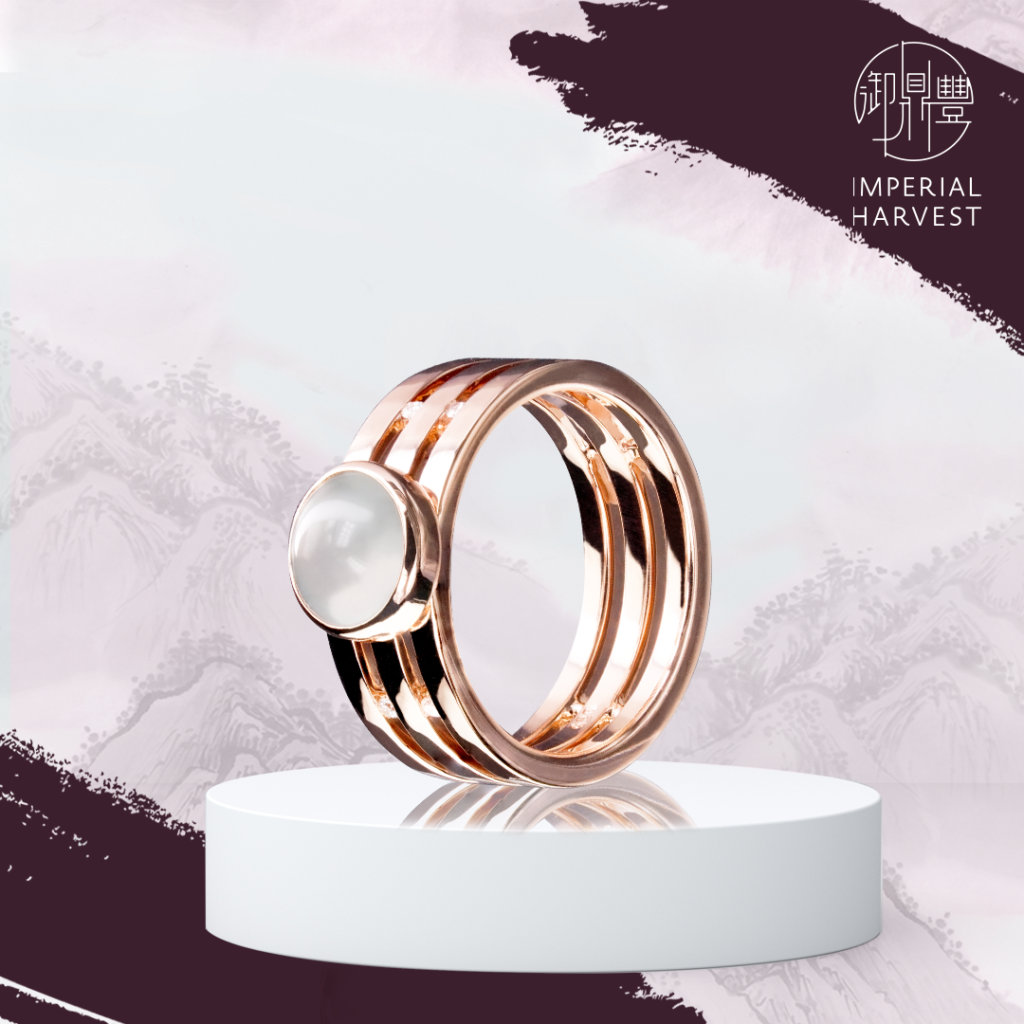 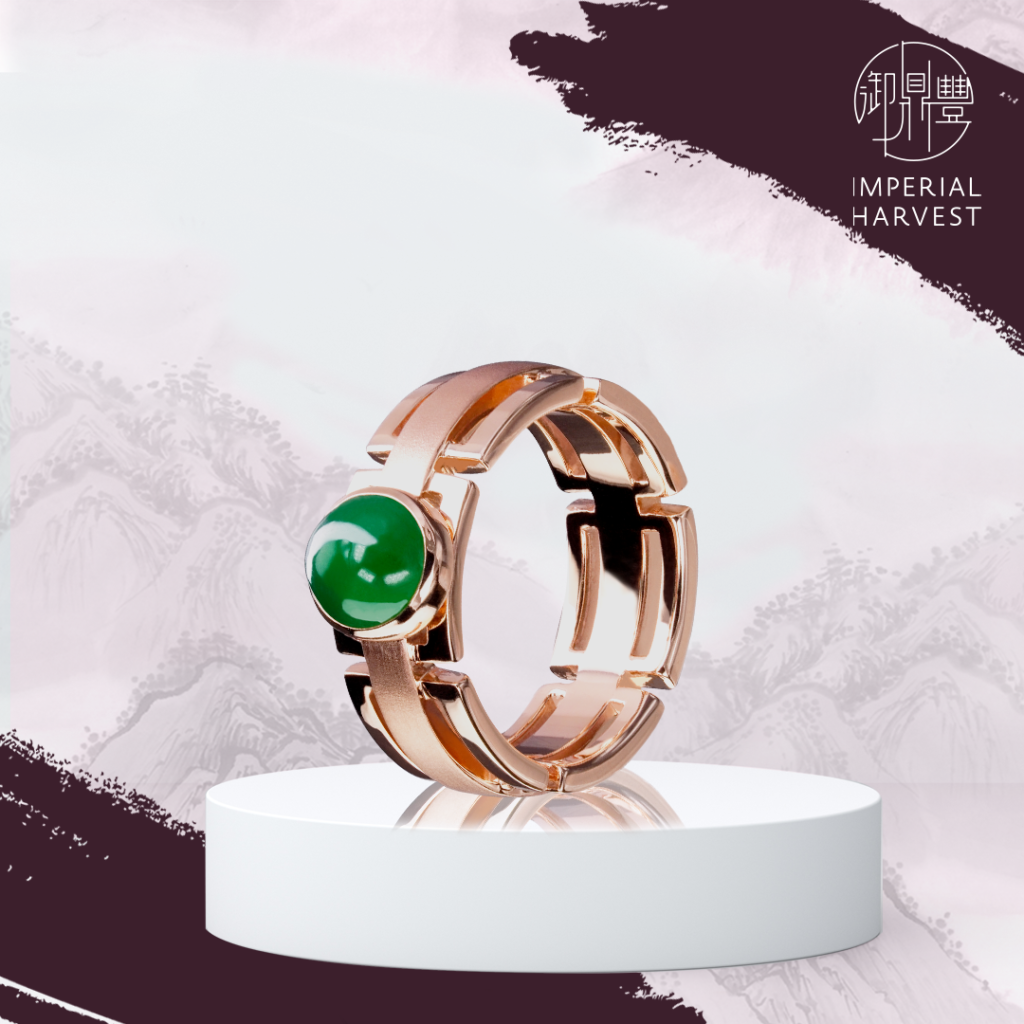 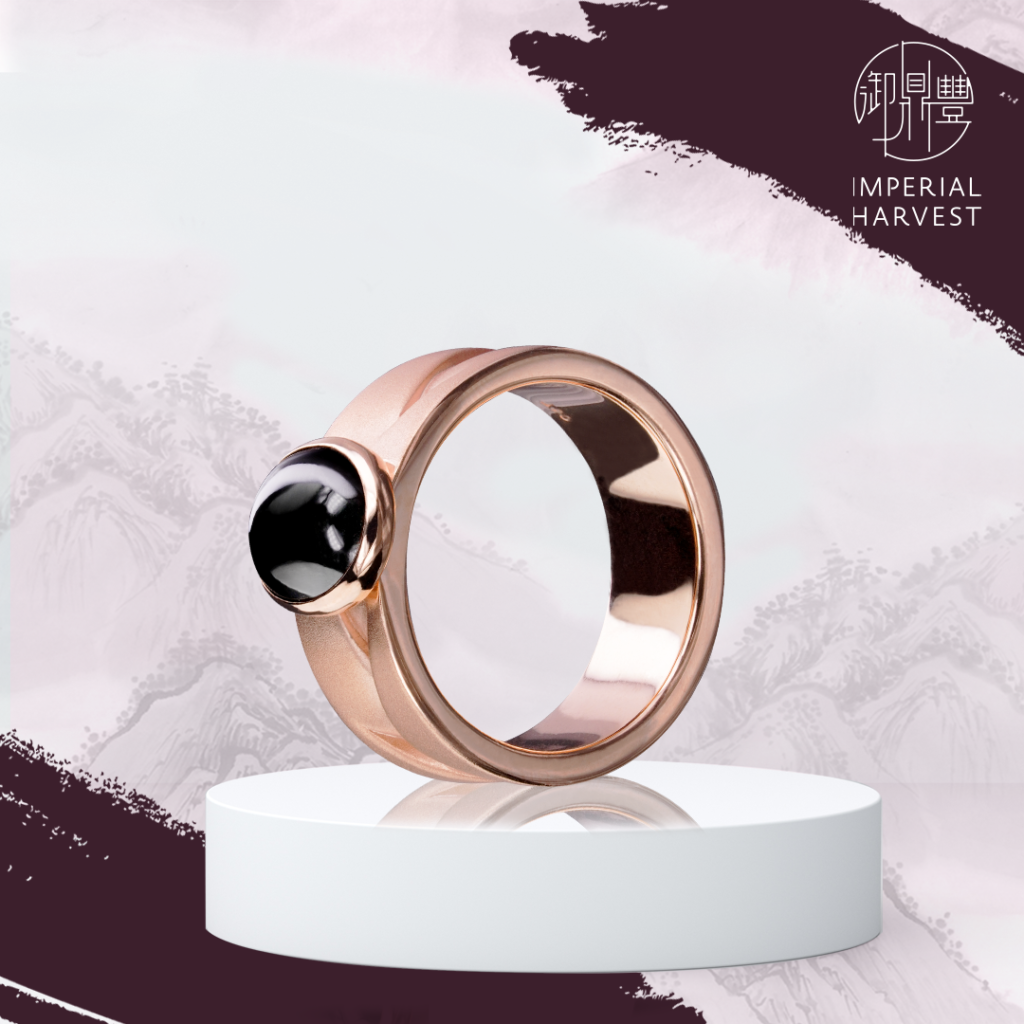