Posted by Imperial Harvest on 03 December 2021

According to Imperial Feng Shui principles, winter is often associated with major yin, and one’s personal luck. The onset of Winter points to the imminent arrival of the winter solstice, or 冬至, which forms the 22nd of 24 terms of the lunar calendar and falls on the 21st of December this year. 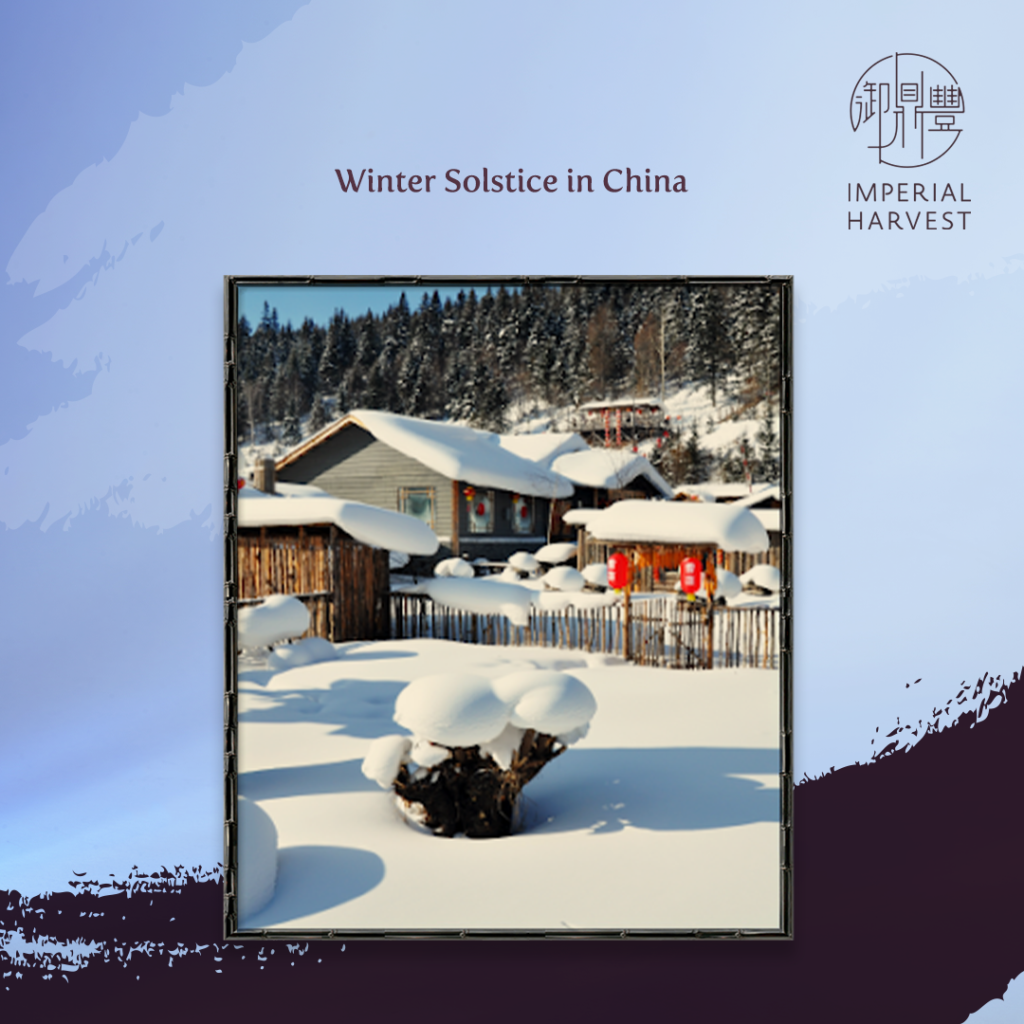 For these reasons, the winter solstice stands as one of the most culturally and spiritually significant occasions in Chinese history, embodying a time of reflection, rebirth, renewal and hope for the new year. The highly revered occasion marks fresh beginnings for our blessed clients, and encourages pursuing new windows of opportunity into the new year.

Winter Solstice in the Imperial Court

In the annals of China’s illustrious dynastic history, the winter solstice stood as a cherished event that deeply influenced long-standing traditions, with the grandeur and most prominent commemoration being that of the imperial court’s remarkable prayers and offerings. These rites and rituals were conscientiously upheld by generations of Chinese emperors and court officials, being conducted with utmost reverence for this defining event in the imperial court calendar.

Throughout its history as an agricultural society, the agrarian lifestyle became a central facet of everyday life. With the nation’s social and economic success dependent on bountiful harvest seasons, the emperor, in his capacity as the Son of Heaven, was called upon to conduct worship and give thanks to the Heavens. It was the omniscient, omnipotent and everlasting force that oversaw and balanced all aspects of life and society. This undertaking was crucial to the Chinese dynasties, with ritual records stating that anything less than perfection would spell bad fortune to come. 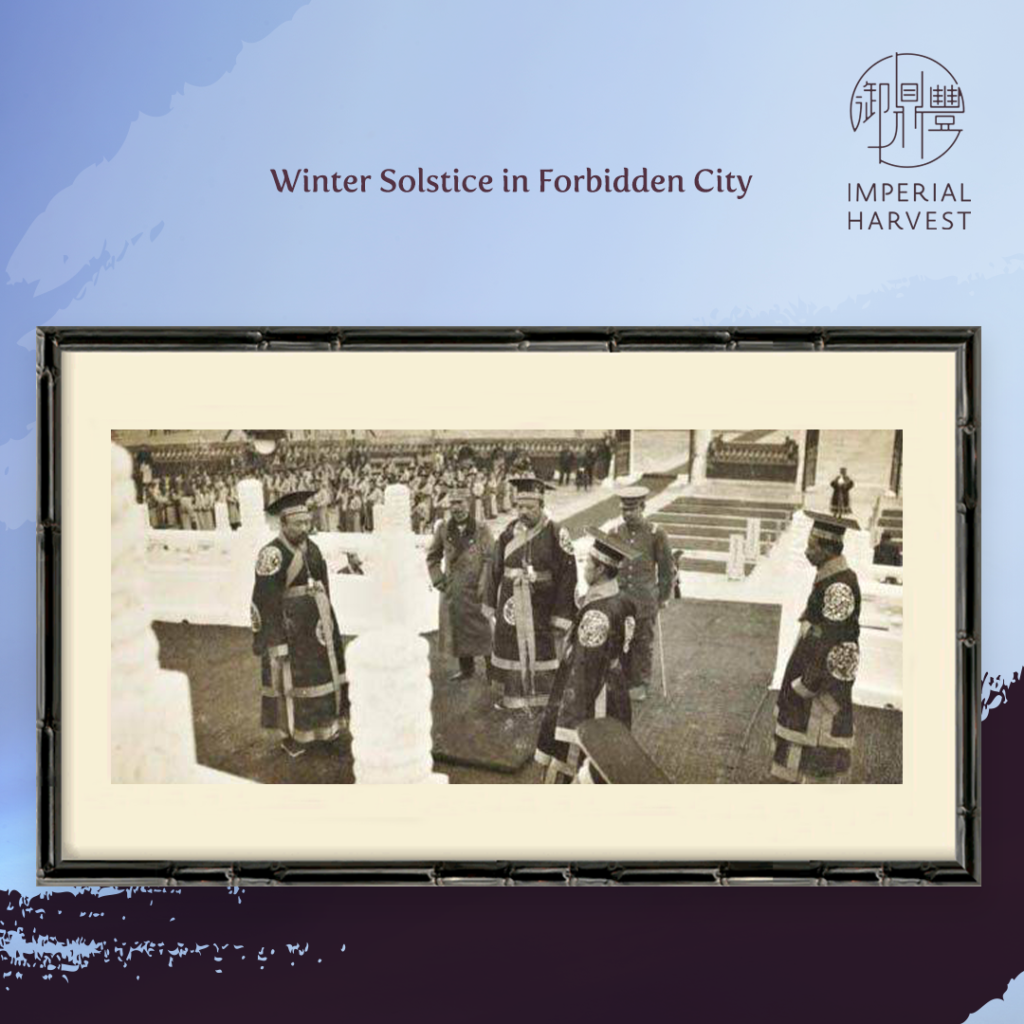 In the weeks leading up to the winter solstice, the Forbidden City would have experienced a flurry of activity, with the imperial court completing their preparations for the ceremony. Worship of Heaven culminated in the emperor leaving the Forbidden City and venturing to the Temple of Heaven (天坛) to conduct annual winter solstice prayers. These consisted of elaborate rites and rituals that gave thanks to the Heavens for the year’s harvest, as well as prayers for continued peace, prosperity and abundance in the coming year.

A tribute to the Temple of Heaven

At the centre of sacred imperial winter solstice rites stood the Temple of Heaven. The construction of this architectural masterpiece was completed at least 600 years ago under the reign of Emperor Yongle during the Ming Dynasty. For generations, it symbolised the profound relationship between heaven and earth, and had remained as the foremost site for heavenly worship and thanksgiving. Forming the focal point of the imperial winter solstice rites, the spiritual and cultural significance surrounding the Temple of Heaven only bolsters its status as the home of Imperial Feng Shui. 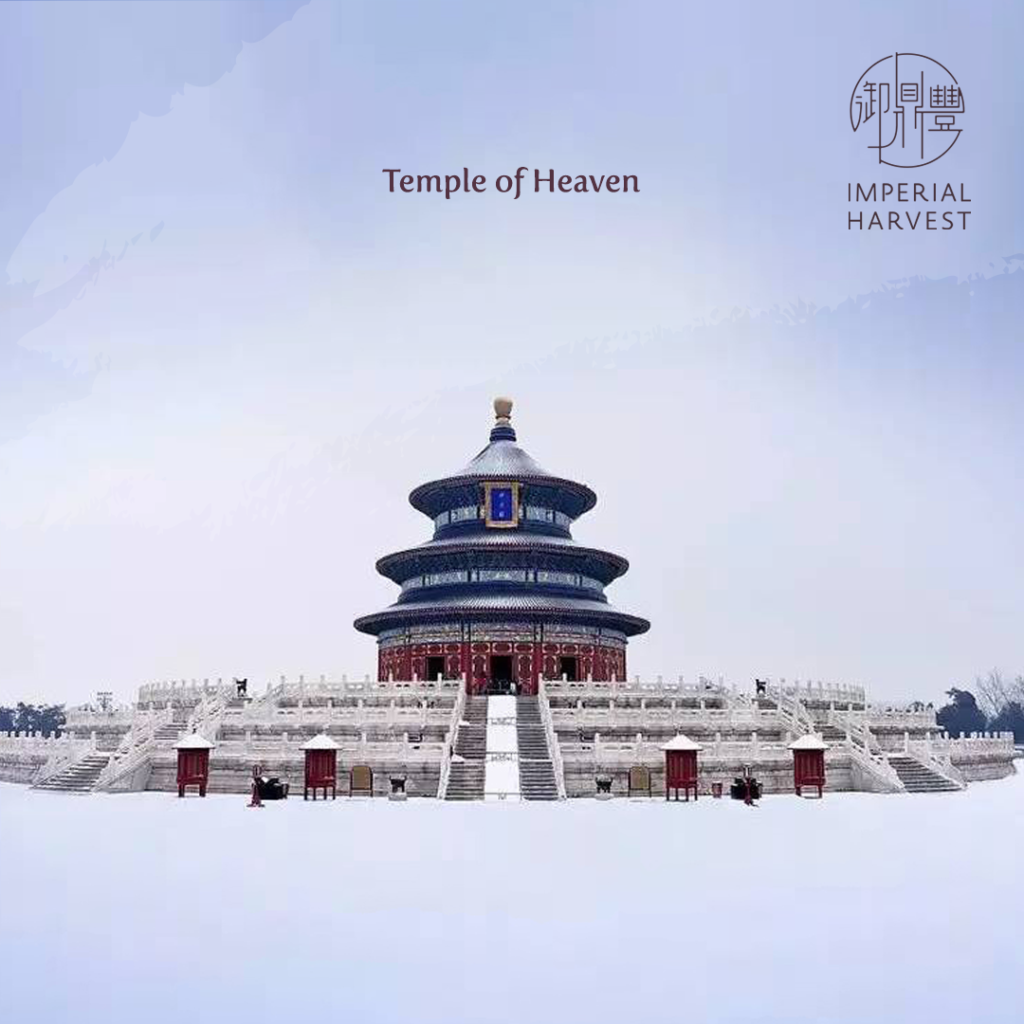 Walking into the temple complex within the Forbidden City, the three-tiered Hall of Prayer for Good Harvests stands as a grand and impressive building featuring an aesthetically harmonious three-tiered roof that represents the trinity of Heaven, Earth and Humanity. During the winter solstice, emperors of the Ming and Qing dynasties conducted sacred rites worshipping the God of Heaven, praying for the continued prosperity and fortune of their empires.

Consisting of a series of five elegantly designed rings, the centre of each ring lies the crown of the Bliss of Harvest collection – the Imperial Harvest Fine Jadeite Cabochon. Where jadeite pendants govern an individual’s personal luck, these fine jadeite cabochons bestow heightened intuition upon their destined owner – empowering them to confidently make sound decisions and seize first-mover advantages.

Each Bliss of Harvest ring is created from a patented blend of pure gold, silver and copper resulting in a lustrous 18-karat rose gold ring that represents elements of heaven, earth and humanity. The beautiful rose gold hue only intensifies with age and evokes a vibrant red found throughout the Temple of Heaven – a colour synonymous with prosperity and auspiciousness. 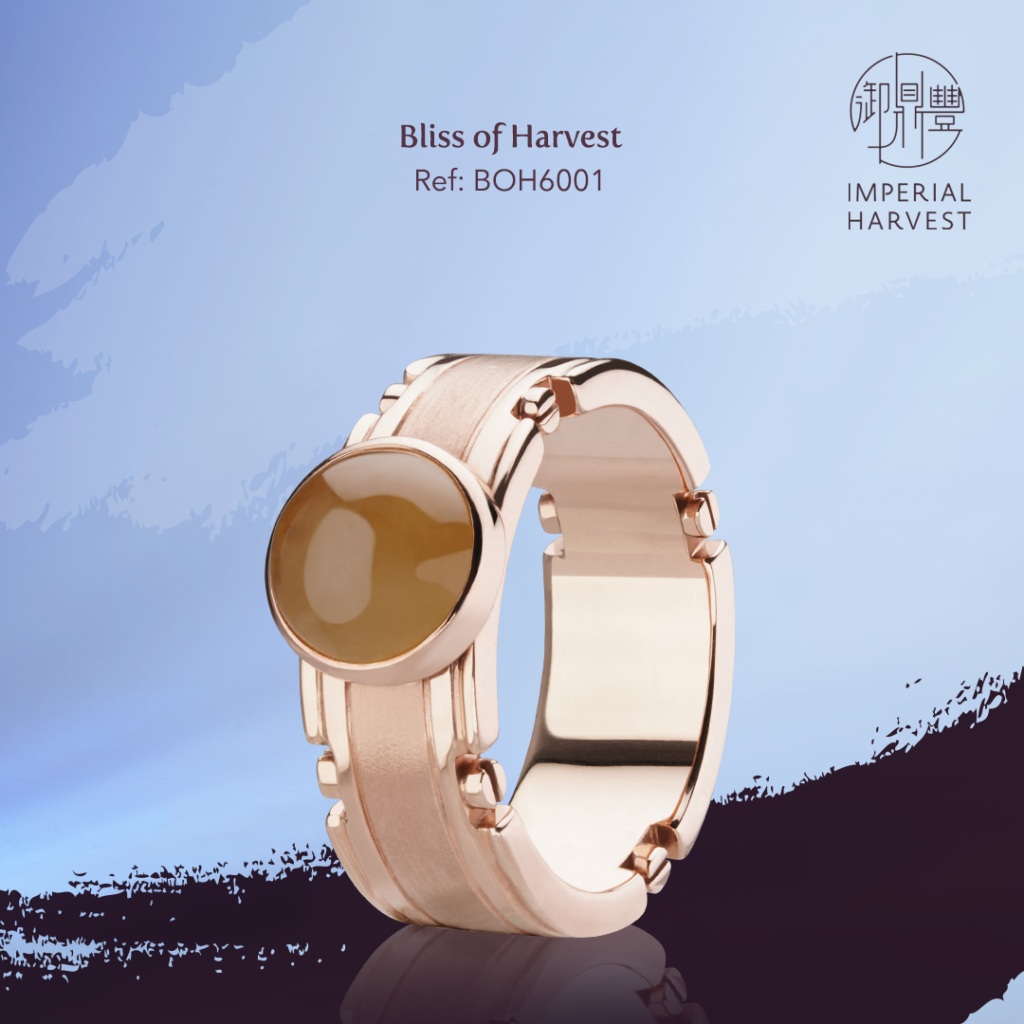 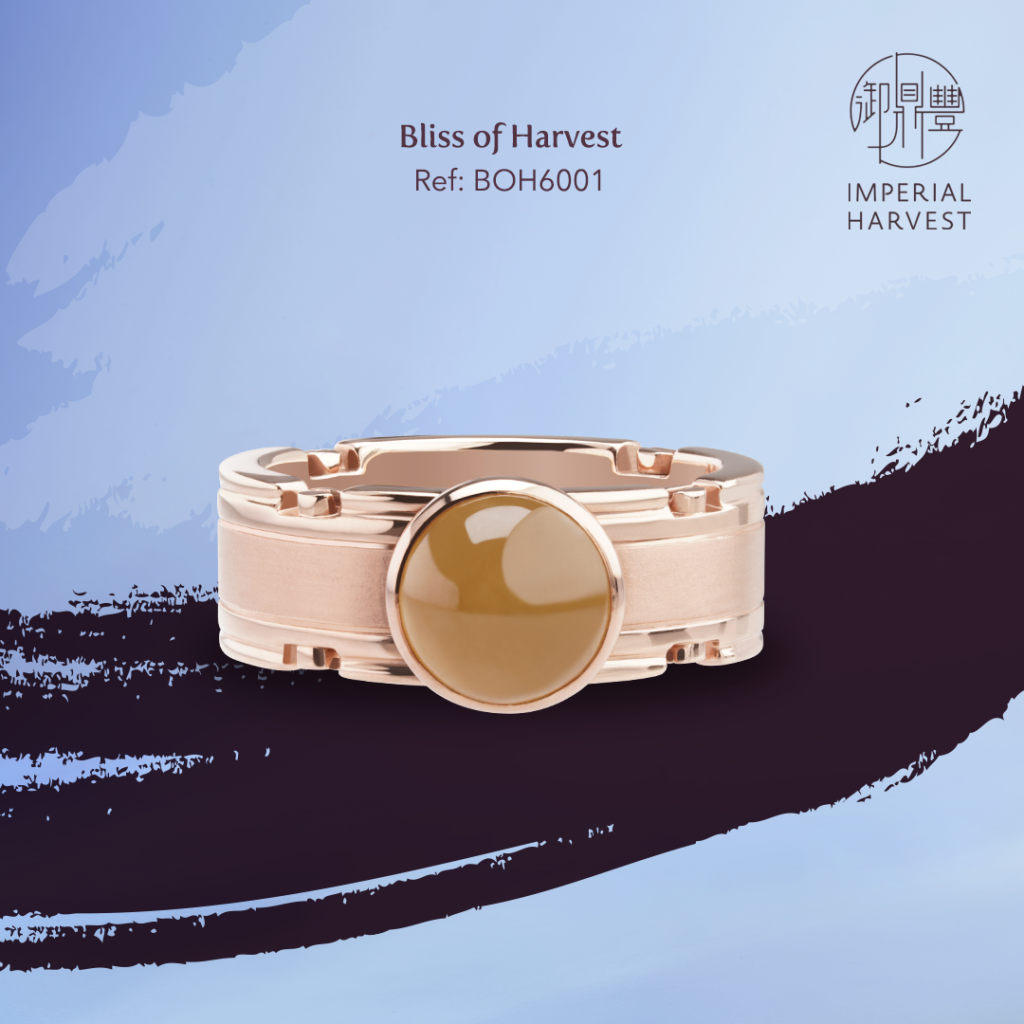 Bearing a tasteful contrast of matte and mirror finishes, the first ring in the collection subtly draws reference from the harmonious existence of yin and yang – the combined essence of heaven and earth. Accented by four handcrafted screws placed equidistant from one another, alluding to the four innermost pillars of the Hall of Prayer for Good Harvests. 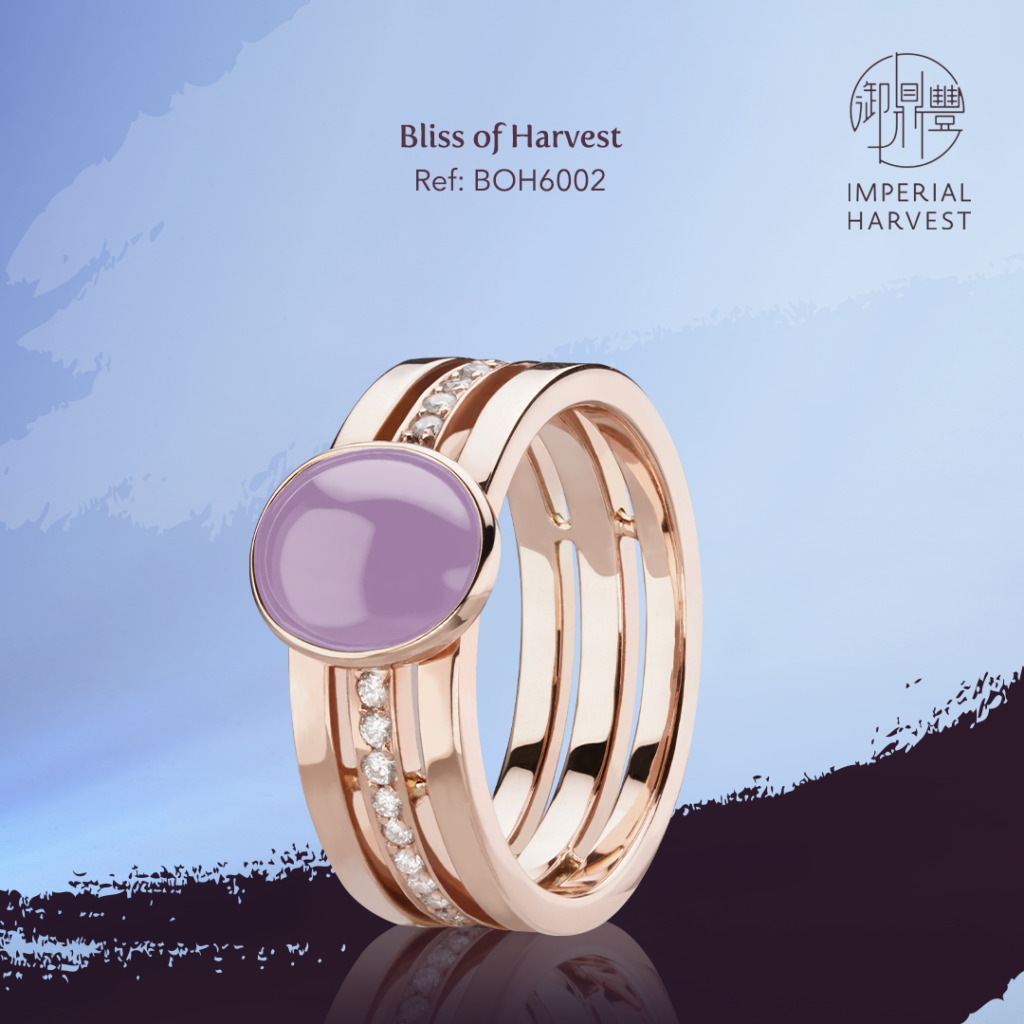 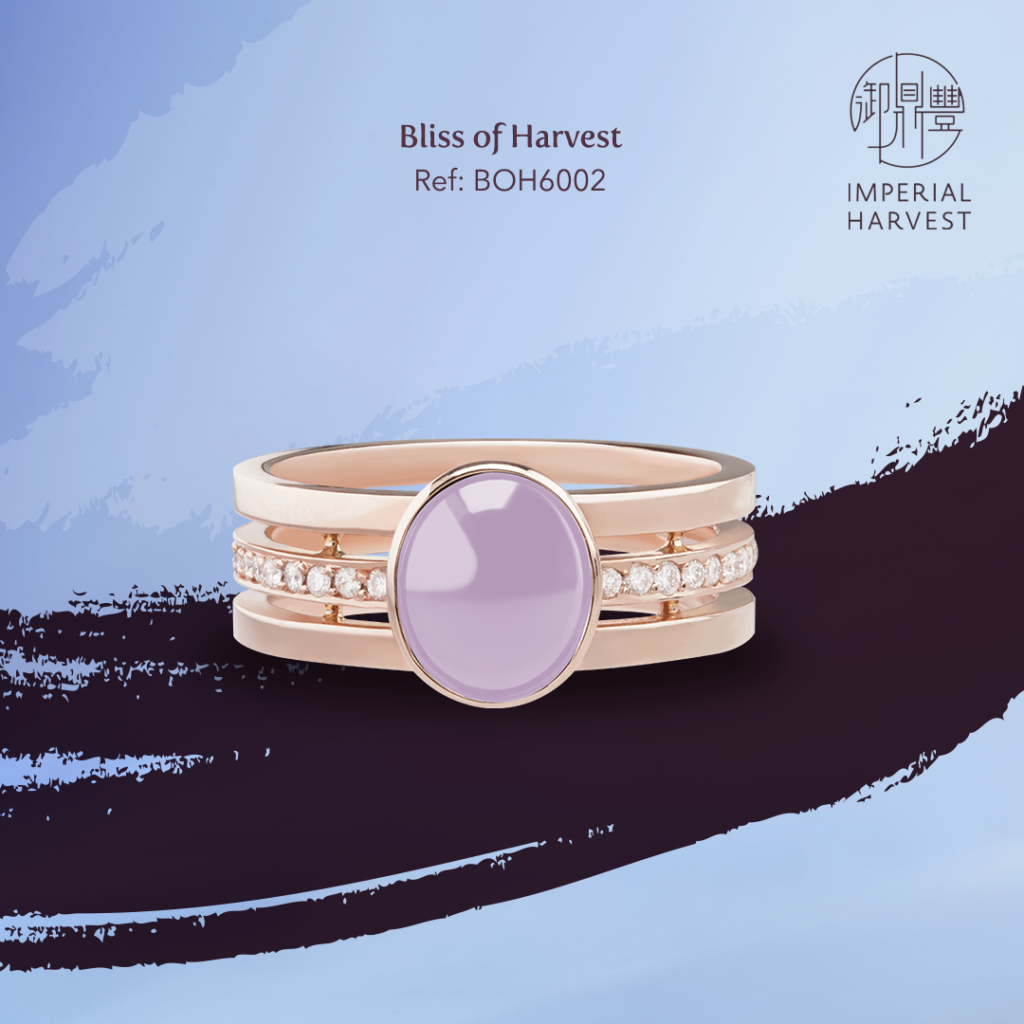 In contrast to the subtle elegance of the first Bliss of Harvest ring, the next addition to the Bliss of Harvest collection features a stunning diamond-studded inner band. The infinite luminescence of this element inspires greater achievements on its destined owner’s horizon and signifies a bright future of hope and promise. The four structural pillars interspersed along the ring band represent the four inner structural pillars of the Hall of Prayer. 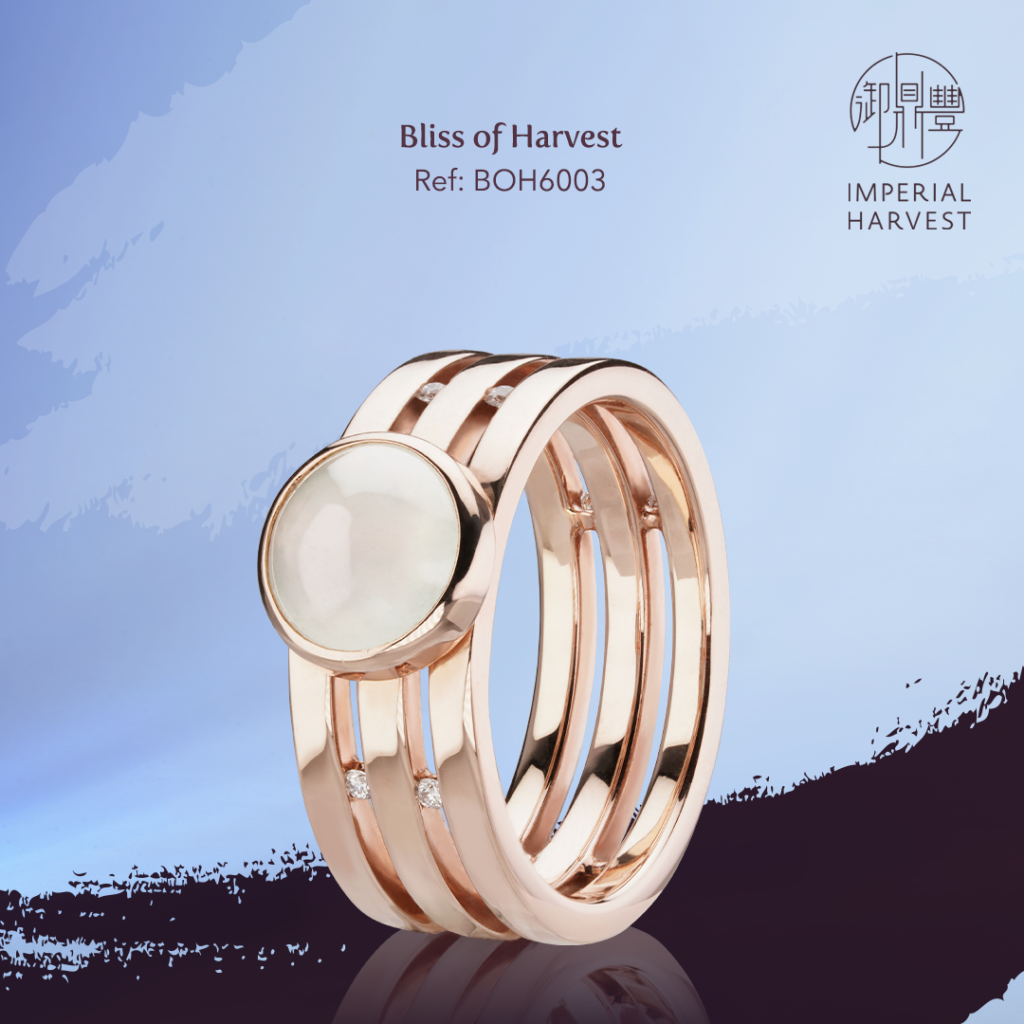 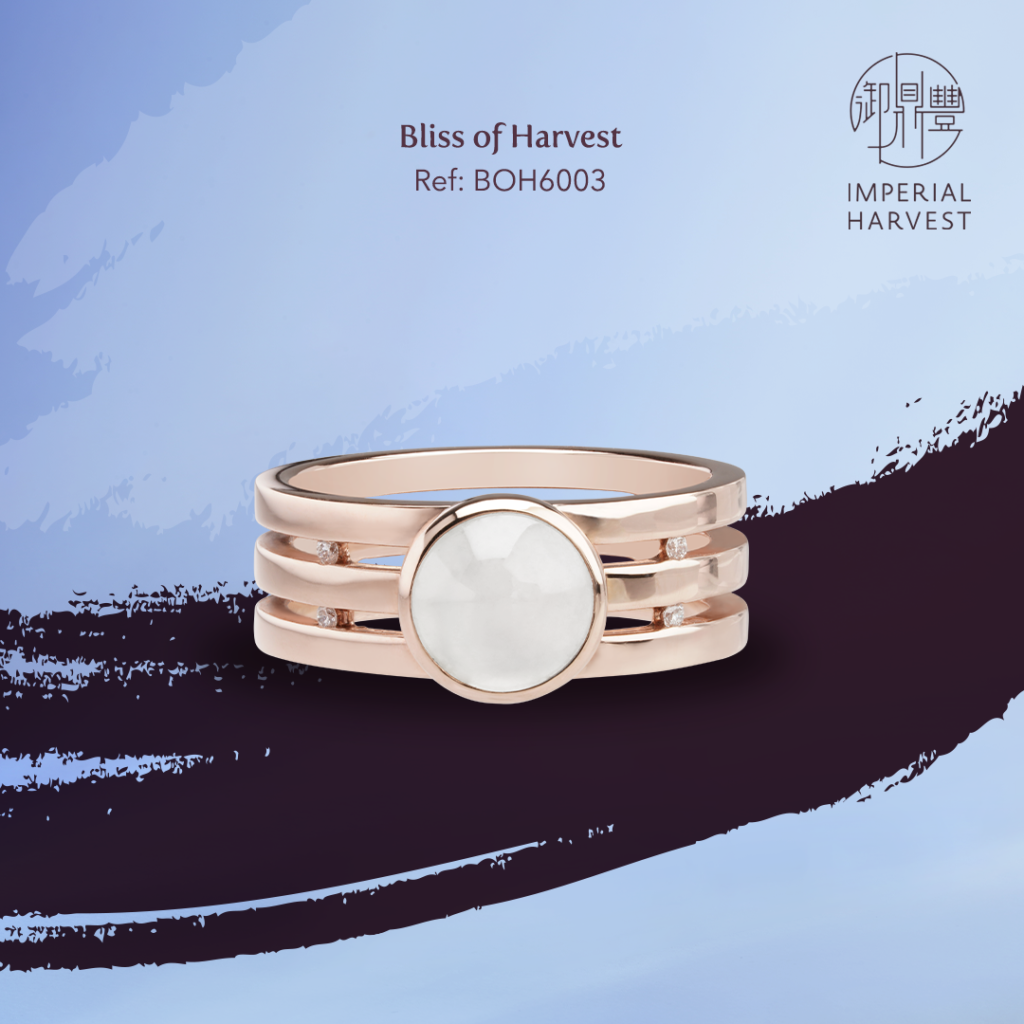 A gleaming, hand-burnished mirror finish elegantly accentuates three distinct bands in this Bliss of Harvest ring. Paying homage to the sacred Hall of Prayer for Good Harvests, eight brilliant-cut diamonds form four pillars to represent the Hall of Prayer’s four innermost pillars. A recurring design theme throughout the collection, these four pillars form a captivating frame for the ring – alluding to both physical and metaphoric support. 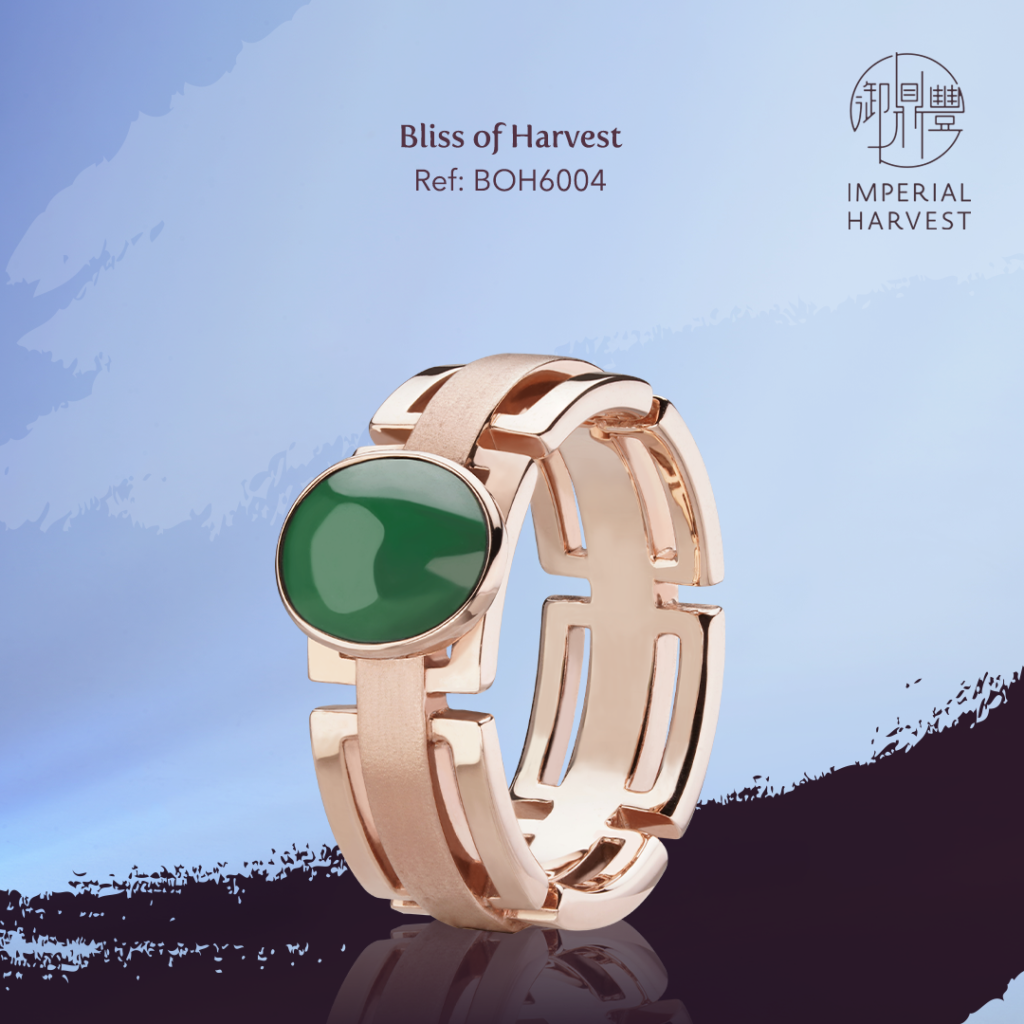 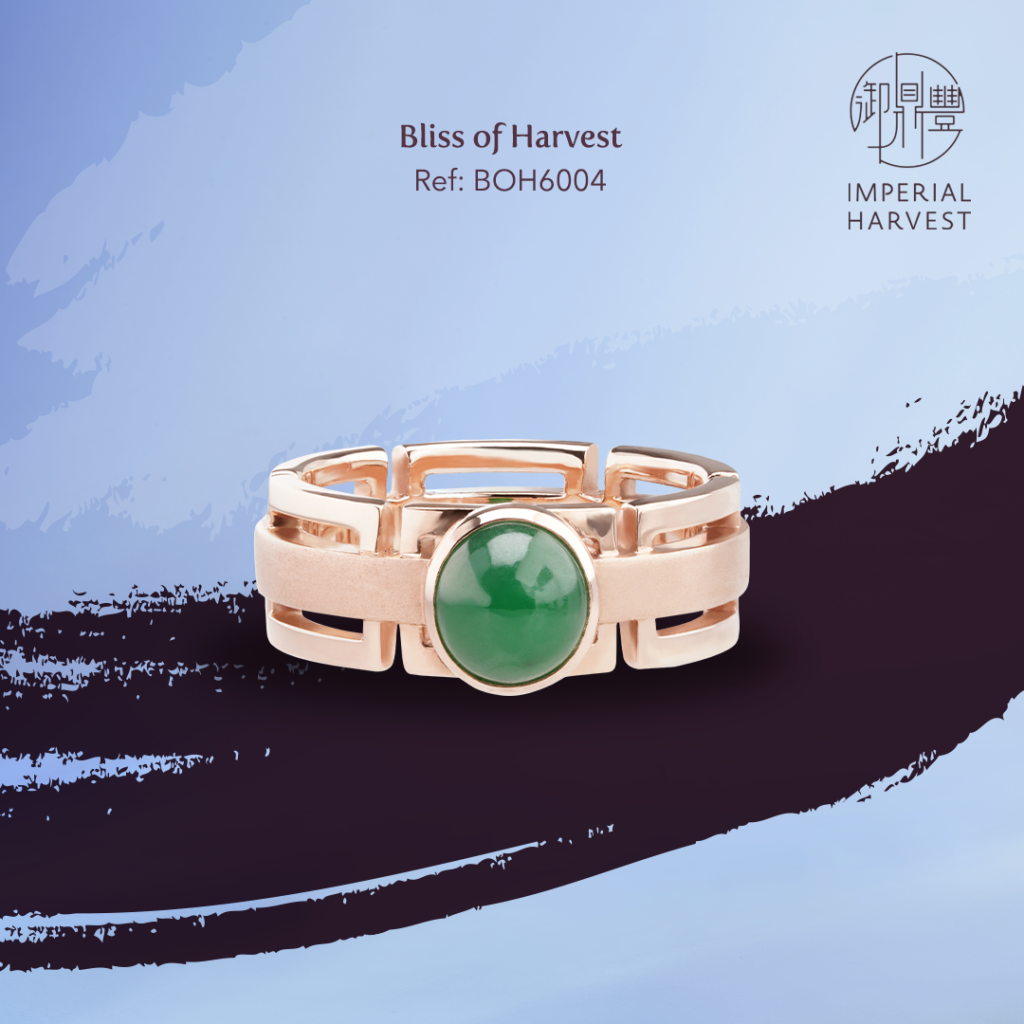 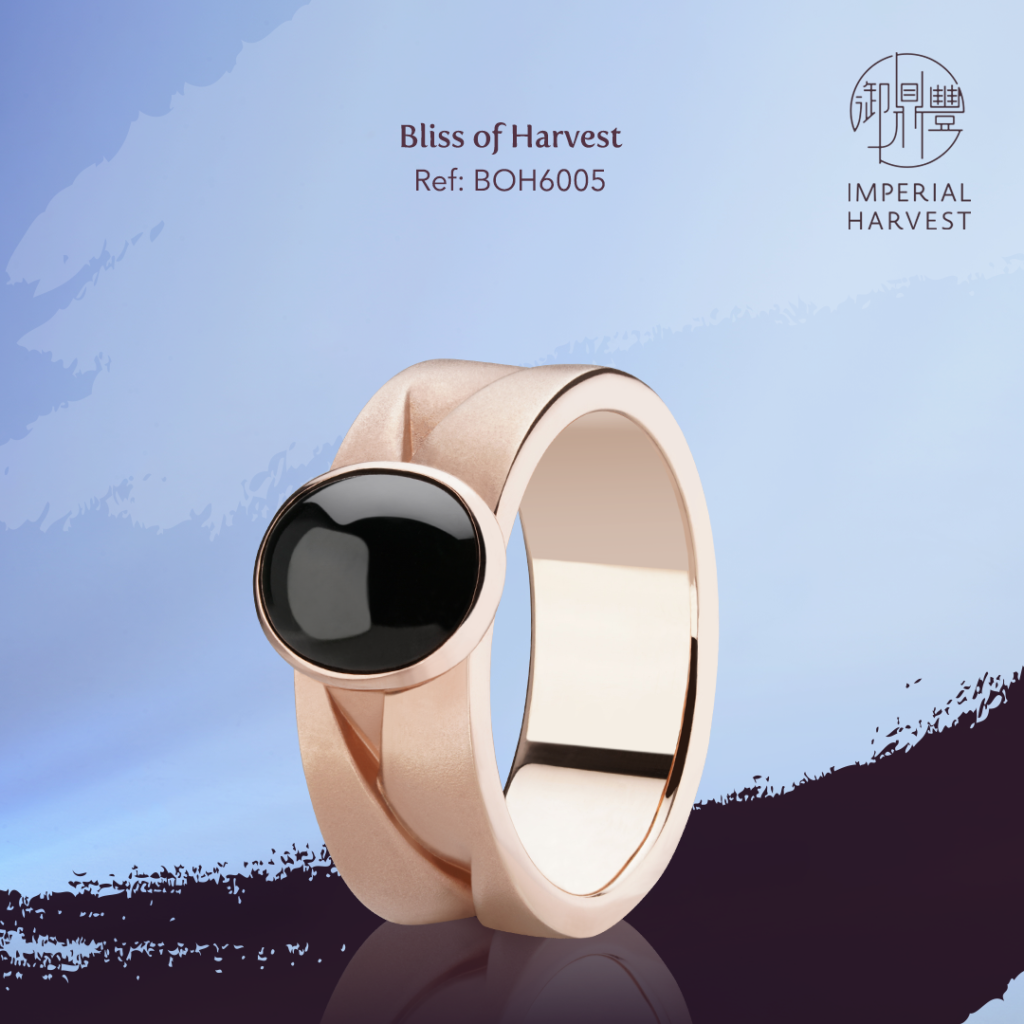 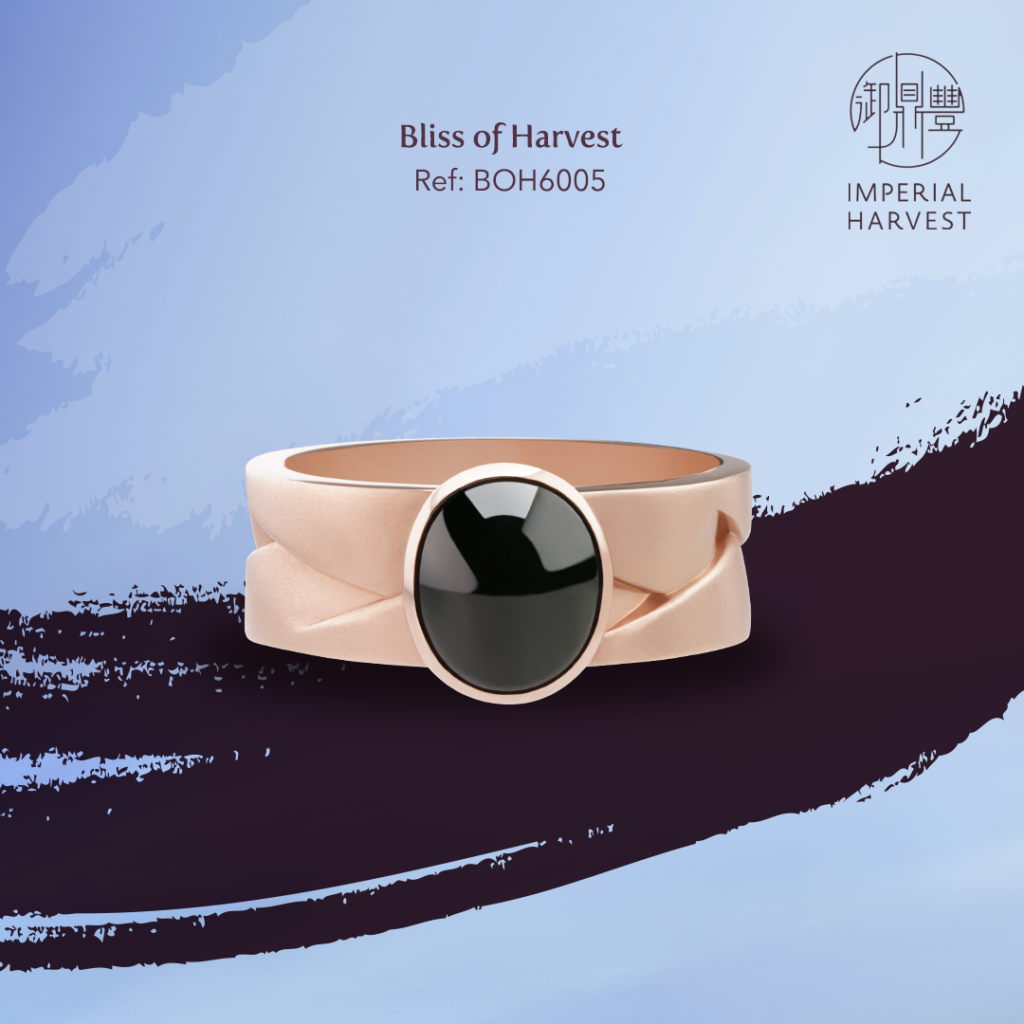 The final addition to the Bliss of Harvest collection features a minimalist yet abstract tri-band design that stands out from the previous four designs. The unique aesthetic of this band utilises the art of perspective, melding the band together and folding it into a structurally robust, yet discerning tapestry that exudes a restrained sense of power.

Each ring is adorned with fine jadeite cabochons hewn from the centre of jadeite boulders where Imperial Feng Shui energies are the densest and most intense. Each jadeite cabochon is meticulously hand-finished by Imperial Harvest’s master artisans, each boasting a wealth of multi-generational techniques in their craft.

As the winter season calls for self-reflection, renewal and preparation, Imperial Harvest’s signature Bliss of Harvest collection stands as a classic and enduring tribute to the winter solstice rites and rituals of Chinese history. The collection enhances your intuitive perceptiveness and empowers you to attain your dreams and aspirations.