Posted by Imperial Harvest on 08 October 2021

The Chong Yang Festival (重阳节) is celebrated on the ninth day of the ninth lunar month and is also known as the Double Ninth Festival. This year, it falls on the 14th of October.

Chong Yang is an important occasion that bears witness to many historical events throughout Chinese history. As part of the cultural traditions surrounding Chong Yang, the custom of performing imperial rites was undertaken by Chinese royal families to express their gratitude for the harvest season.

This month, join Imperial Harvest in celebrating the rich festivities that accompany this eagerly-anticipated occasion. Read on to discover how these collections embody the spirit of the Chong Yang Festival.

During the Chong Yang Festival, Chinese imperial families would participate in Feng Shan (封禪), a rite to pay homage to heaven and earth for the year’s harvest. Agarwood beads featured prominently in the emperors’ prayers for the upcoming year. In invoking the powers of the gods for continued success in the year ahead, they would methodically and meditatively roll the beads in their palms during their prayers.

Agarwood is one of the rarest and most sought-after aromatic commodities, with a value that surpasses that of gold. The dark and aromatic resin produced by the Aquilaria tree is a response to an infection of the Phialophora parasitica mould.

Once harvested, the Agarwood is extracted from the tree in an arduous process that typically takes hours to complete. Agarwood is prized not only for its intense fragrance and appearance but also for its Imperial Feng Shui qualities. 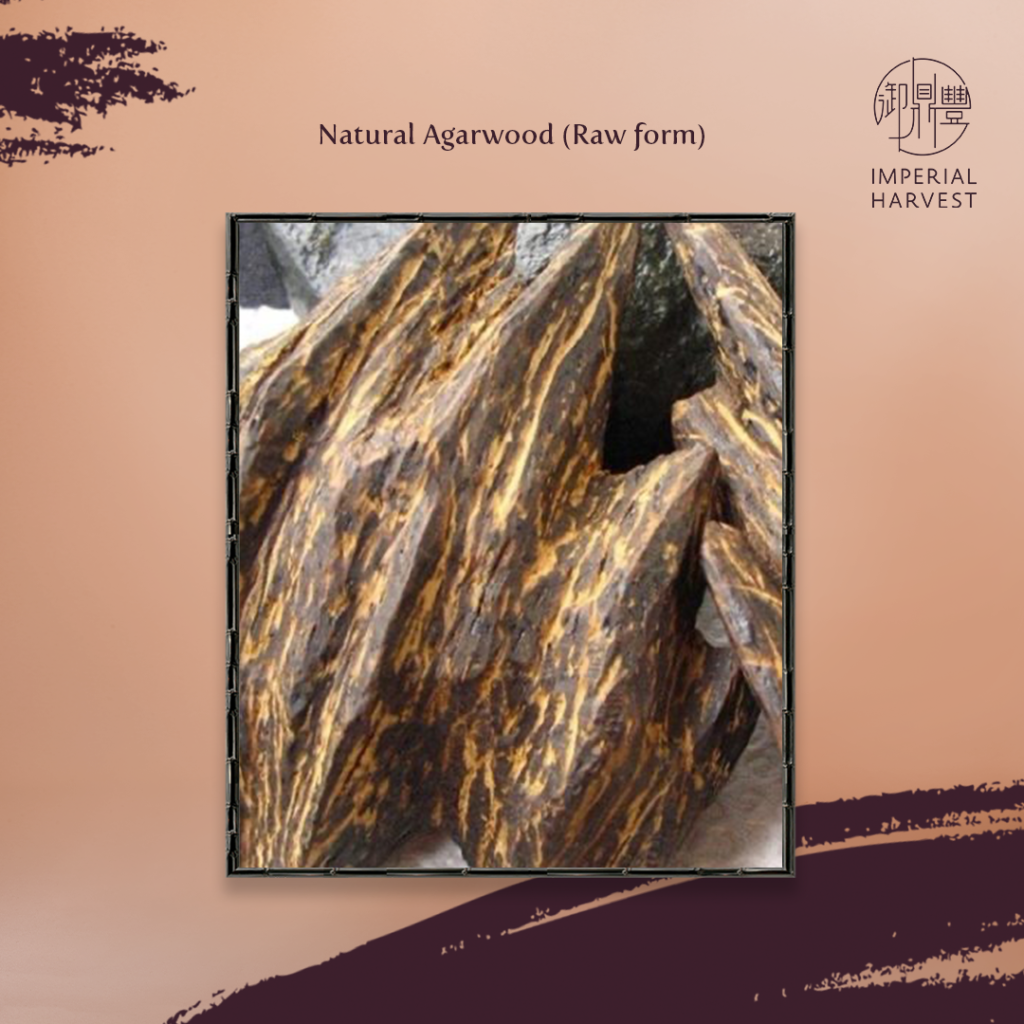 Imperial Harvest sources all-natural Agarwood from the forests deep in the mountains of South Asia, with the wood being free of chemicals, man-made fragrances or fertilisers that may interfere with the formation of Agarwood resins. The natural beauty of the Agarwood is accentuated by our master craftsmen, who craft and polish it by hand to create a treasure truly worthy of the Imperial Harvest name.

The varying lengths in the natural fermentation process give rise to different intensities of colour and fragrance within the wood. Bearing auspicious Imperial Feng Shui properties, Imperial Harvest-grade Agarwood balances the major yang (太阳) which amplifies your direct wealth capacity.

The direct wealth-amplifying properties of the Agarwood collection empowers our blessed clients to achieve astounding growth in their chosen careers. By garnering unwavering support from powerful mentors and authorities within your industry, the Imperial Harvest Agarwood collection generates multifold increases in your revenue streams. 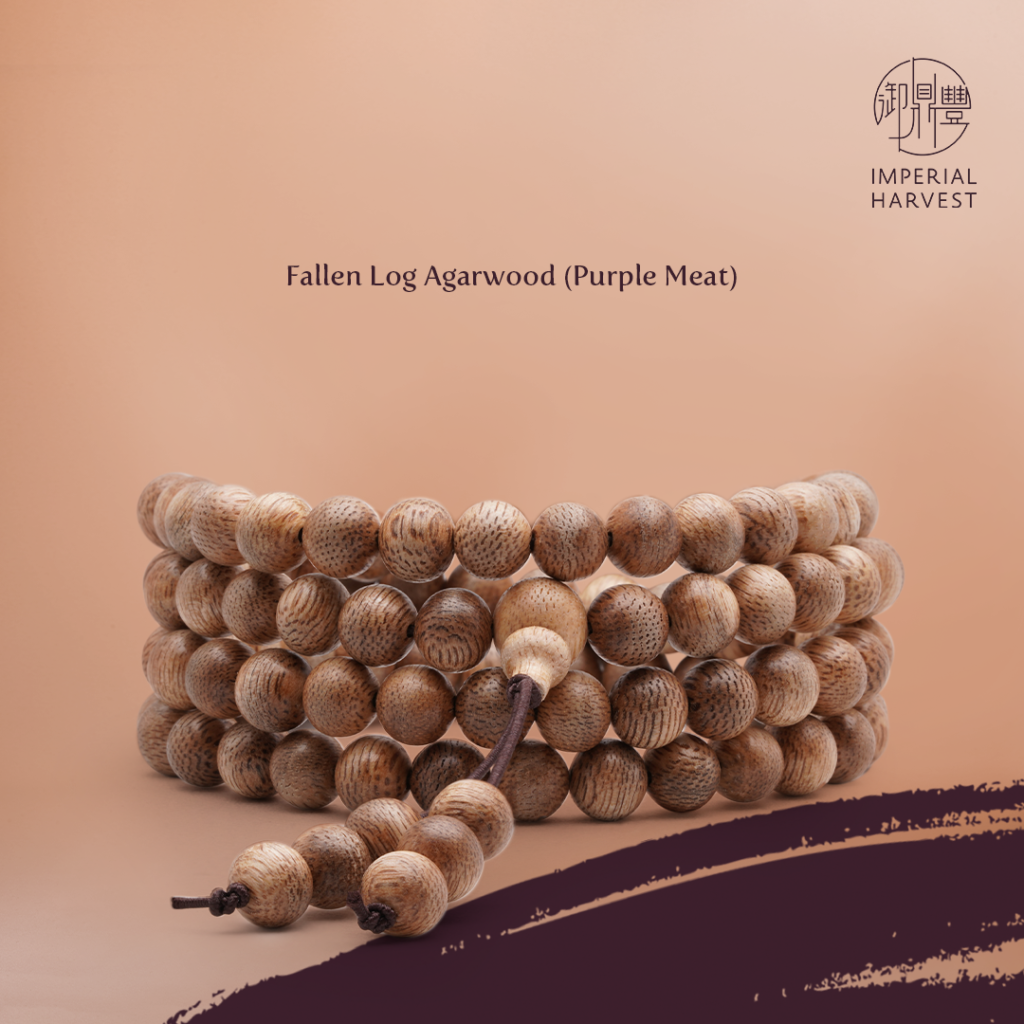 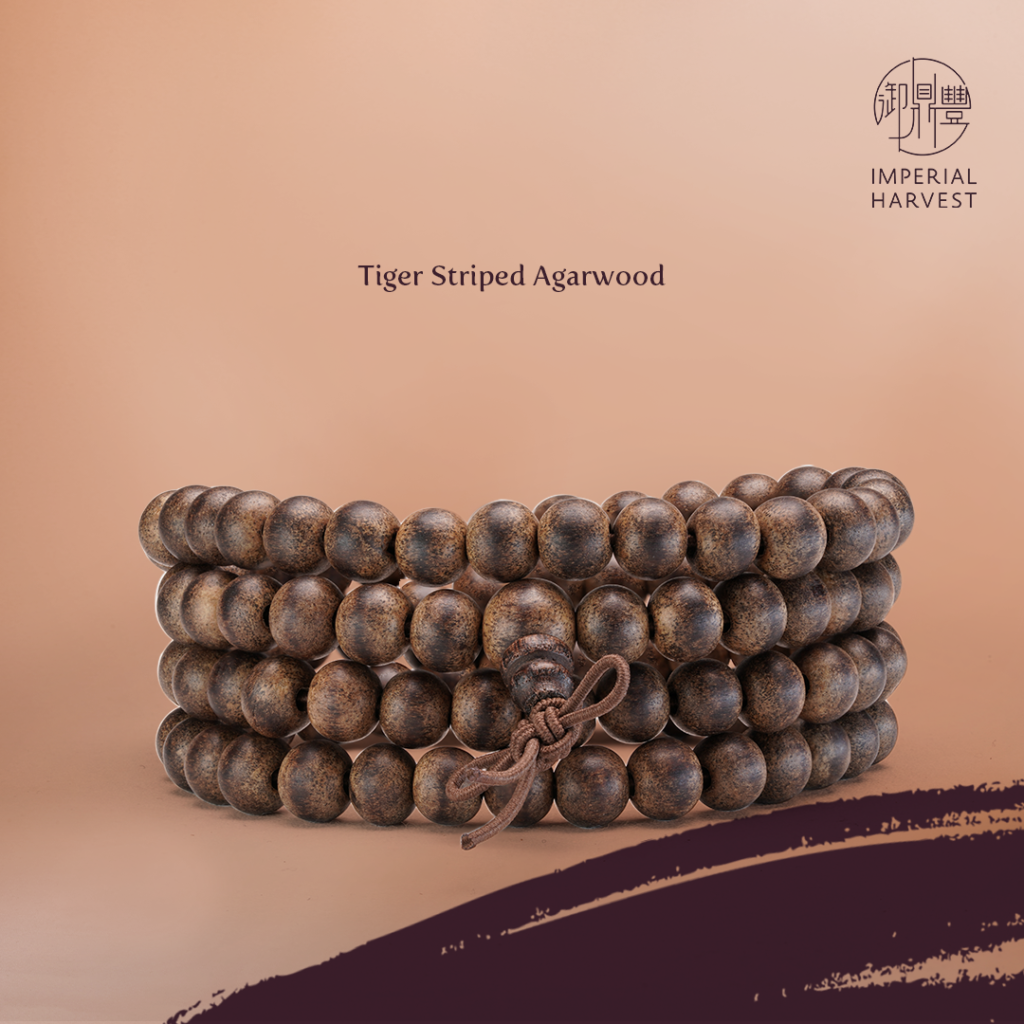 Over the course of no less than 300 years, this variation of Agarwood undergoes its fermentation process as it is half-buried in the ground. The unique positioning of the fallen log leads to thick stripes of Agarwood resin being formed across the wood which resembles a tiger’s stripes, thereby giving the Tiger Striped Agarwood its name. 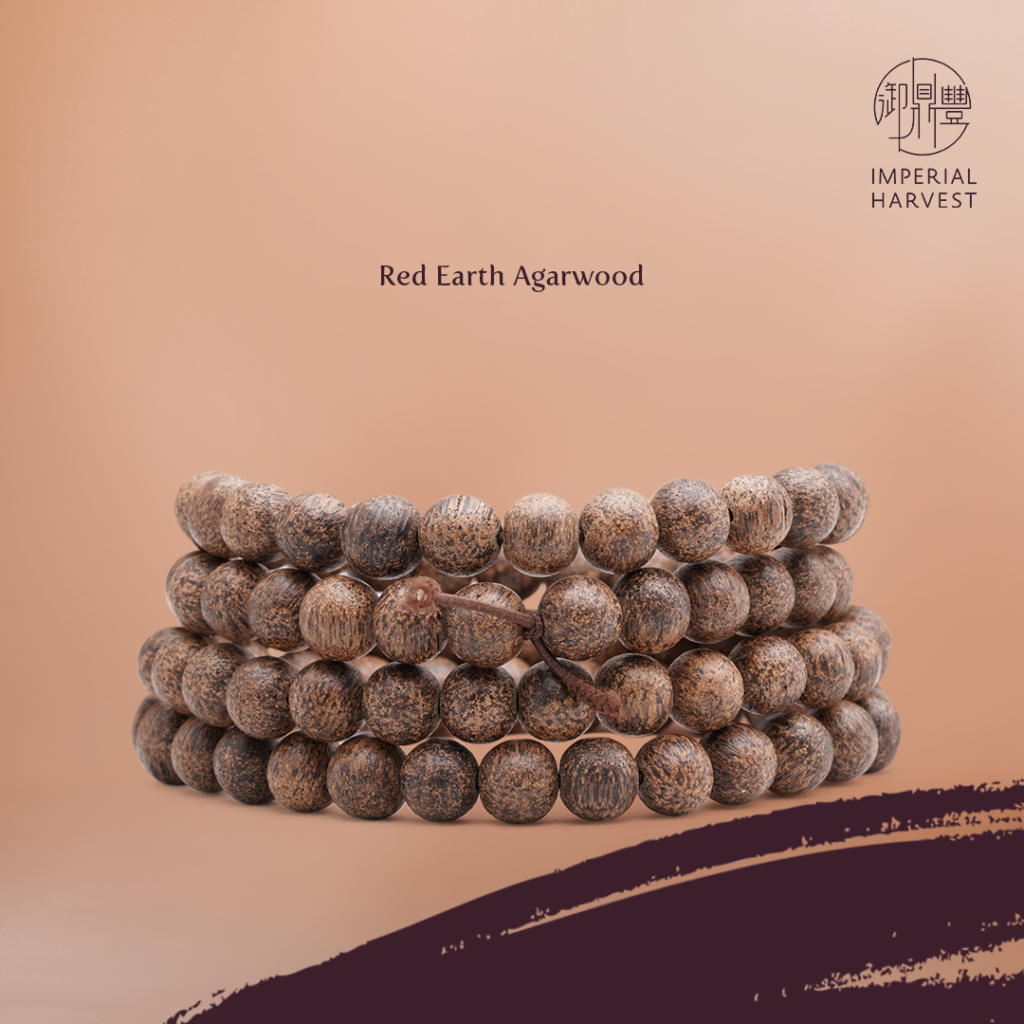 One of the most premium tiers of Agarwood available at Imperial Harvest, the Red Earth Agarwood is exceptionally rare due to the fermentation process that it must undertake. The fallen log is buried in moist, iron-rich soil which creates the optimal environment for the Agarwood mould to flourish. This process, which takes at least 500 years, gives the Red Earth Agarwood its signature reddish hue. 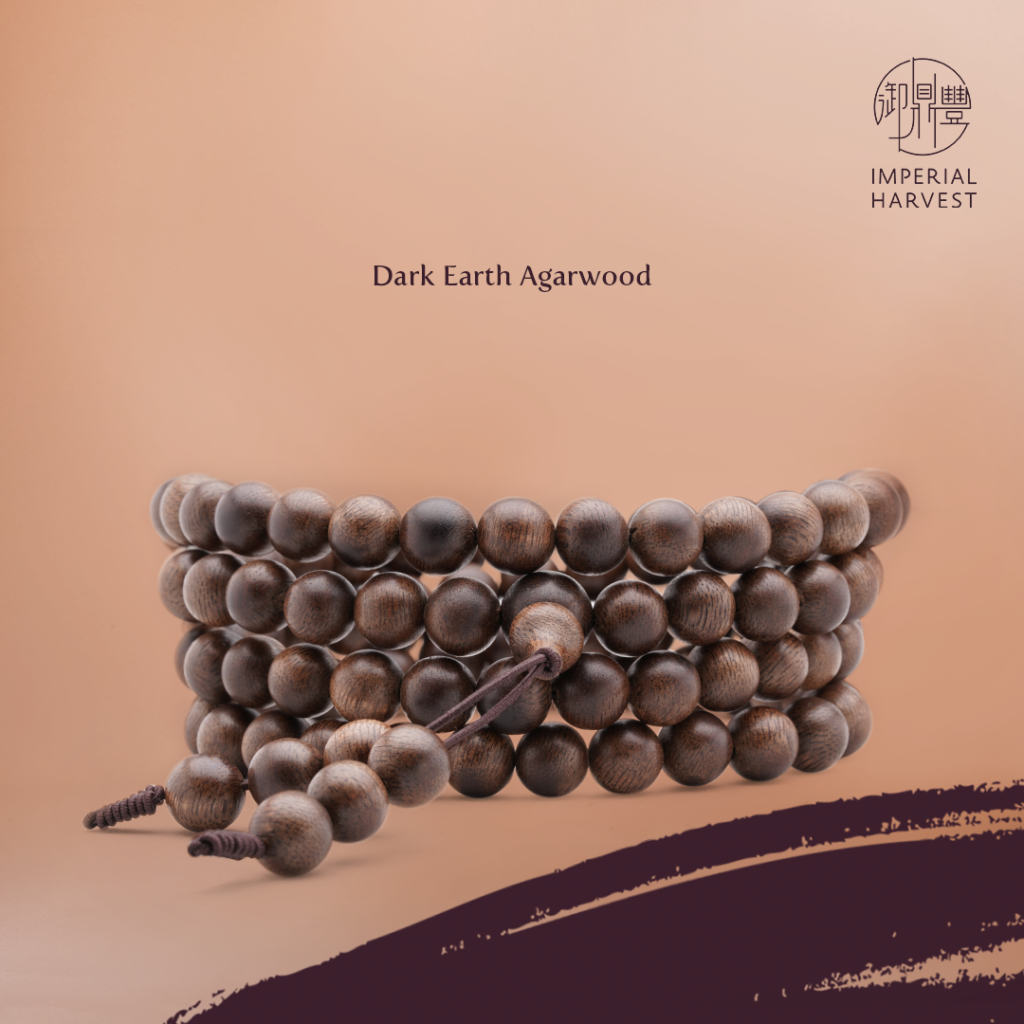 Dark Earth Agarwood is formed when the fallen log is buried in soil that contains a myriad of complex minerals. Its fermentation process occurs over the span of at least 800 years, contributing to the dark and intense colouring that characterises this grade of premium Agarwood. 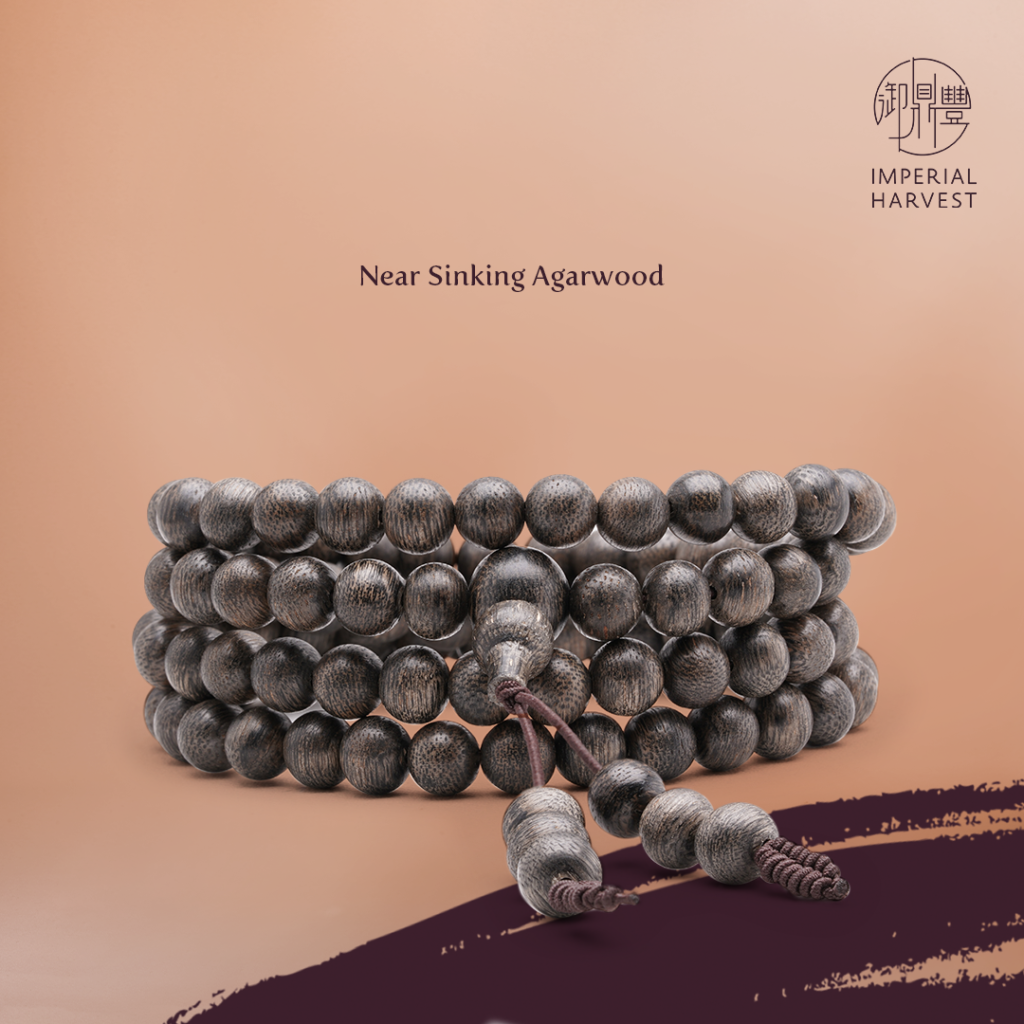 One of the finest grades of Agarwood in the world, this variation was typically reserved for the members of the imperial families in China’s dynastic history due to its rarity. During its millennia-long fermentation process, the density of the resin formed causes the Agarwood to nearly sink when placed in water. This dense resin is rich, intense, and evenly distributed across each bead, giving it an elegant appearance.

As its name suggests, this most premium grade of Agarwood sinks completely when placed in water. Its fermentation process spans several millennia, allowing the Full Sinking Agarwood to develop its signature intense, rich and dark resin. Coveted for its Imperial Feng Shui properties and elegant appearance, this rare and exclusive tier of Agarwood was strictly reserved for Chinese imperial families. 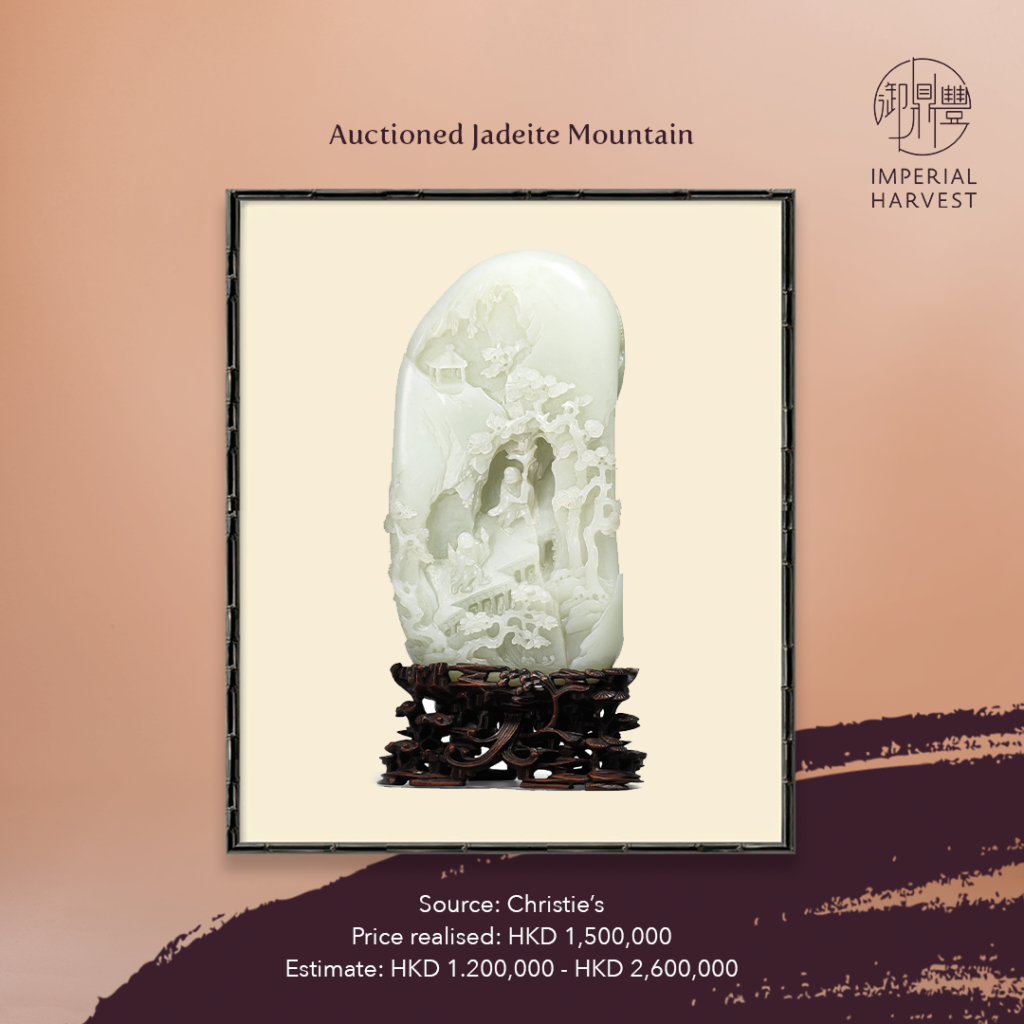 During the Qing dynasty, the Imperial Feng Shui masters advising Emperor Qian Long devised artefacts known as the Qian Long Jadeite Mountains, bestowing the Qing dynasty with the support of influential benefactors. In recent years, these rare and exquisite relics of Emperor Qian Long’s rule have found their places in the auction catalogues of internationally renowned auction houses like Sotheby’s and Christie’s, where they continue to command astronomical prices. The Jadeite Mountain is an important emblem of enduring success and stands as a testament to the legacy of the Qing dynasty.

This season, Imperial Harvest presents the Autumn 2021 Jadeite Mountain Collection inspired by the revolutionary designs introduced to the Qing dynasty by the fusion of eastern and western cultures. 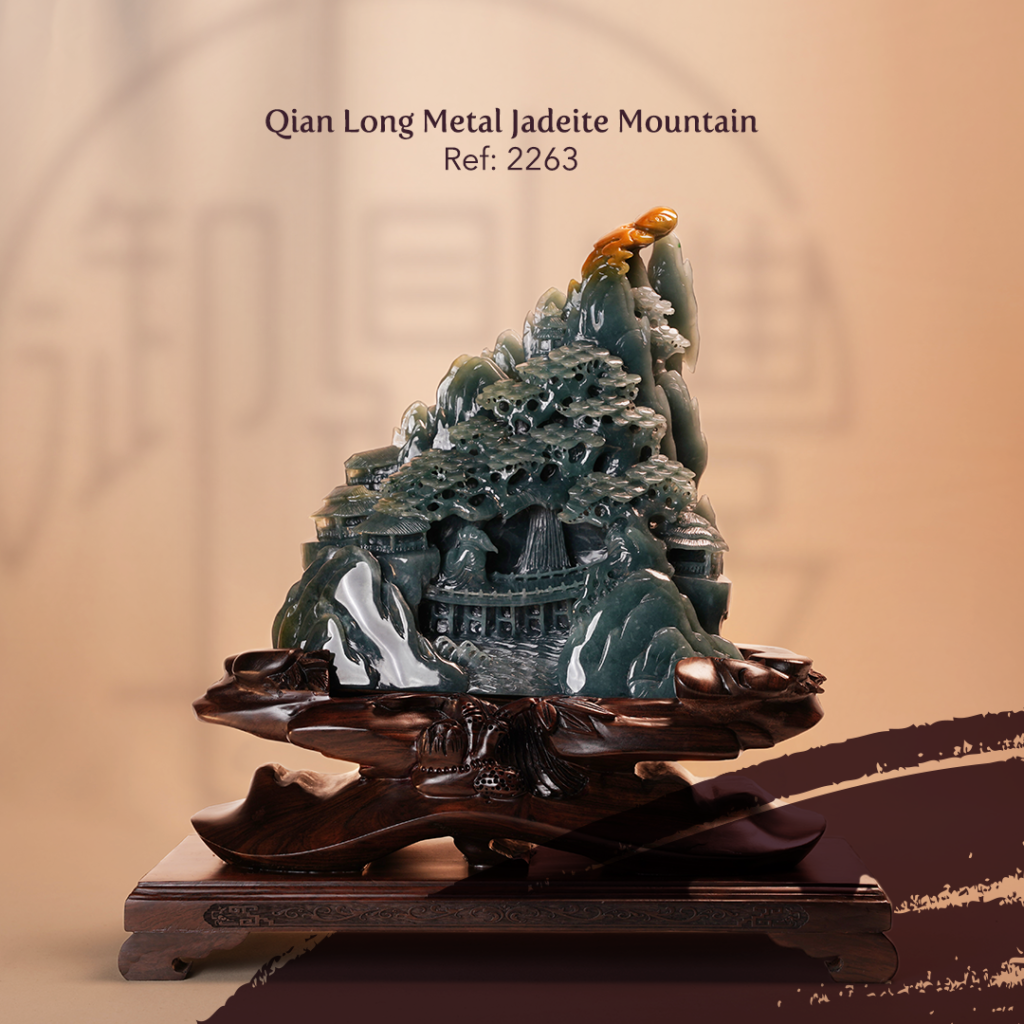 This exclusive collection features multiple strategically placed auspicious features, such as a grove of pine trees — symbolic of longevity, resilience and the capacity to thrive in any situation. The stream of flowing water indicates an influx of wealth, suggesting success in the blessed owner’s personal and professional ventures. 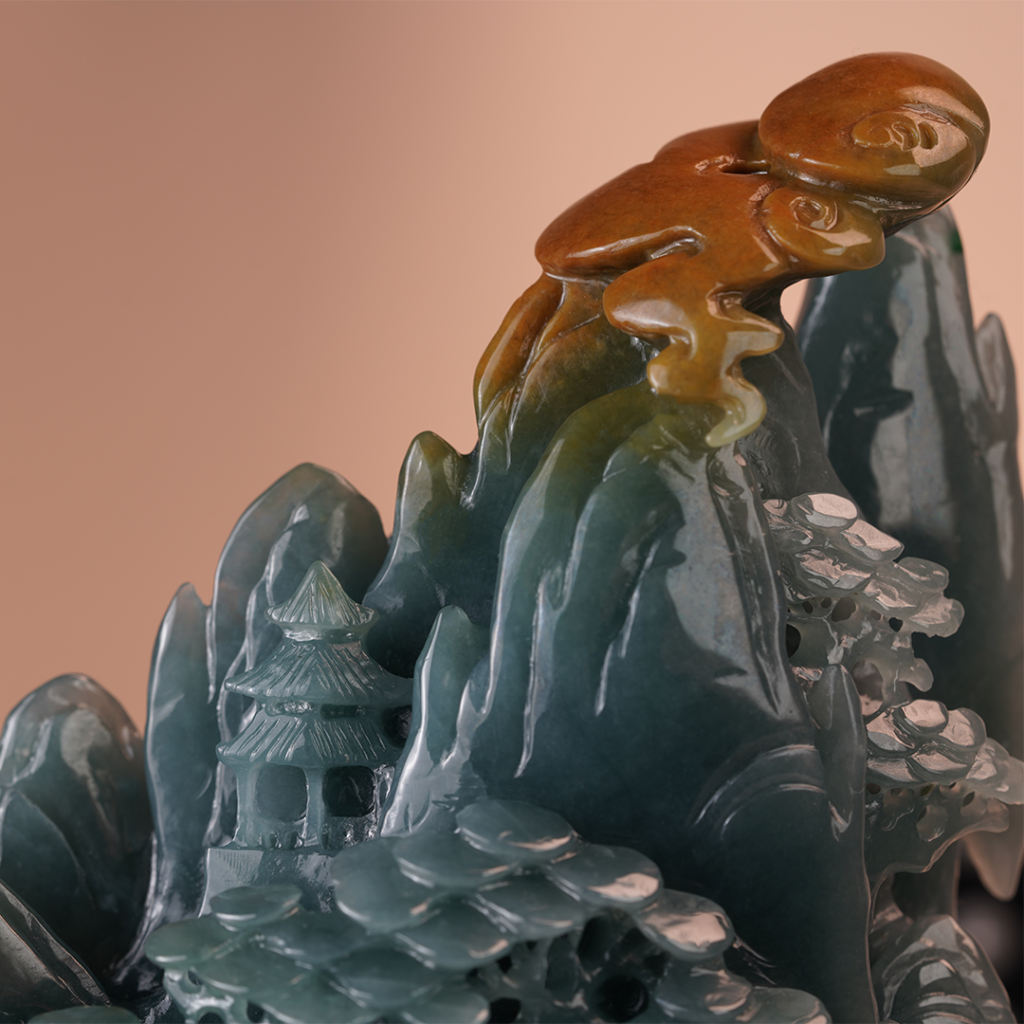 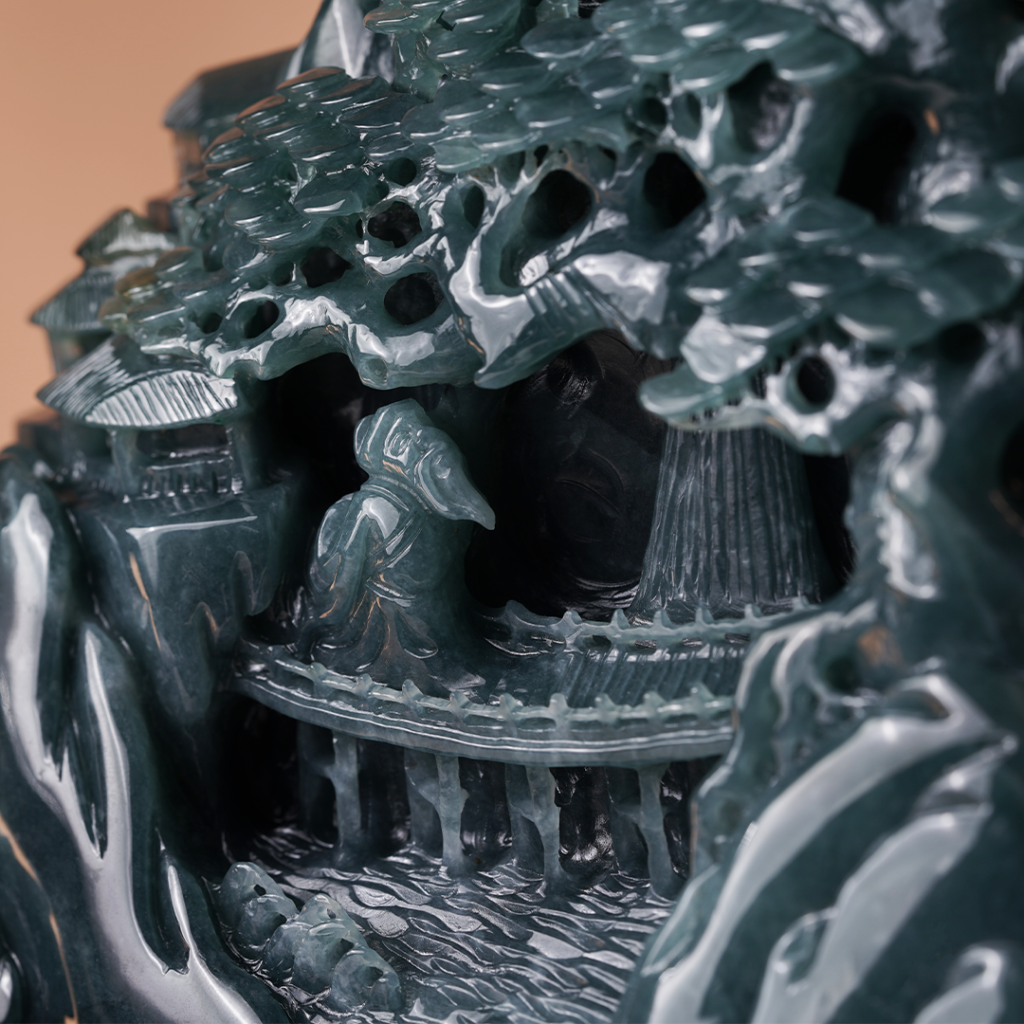 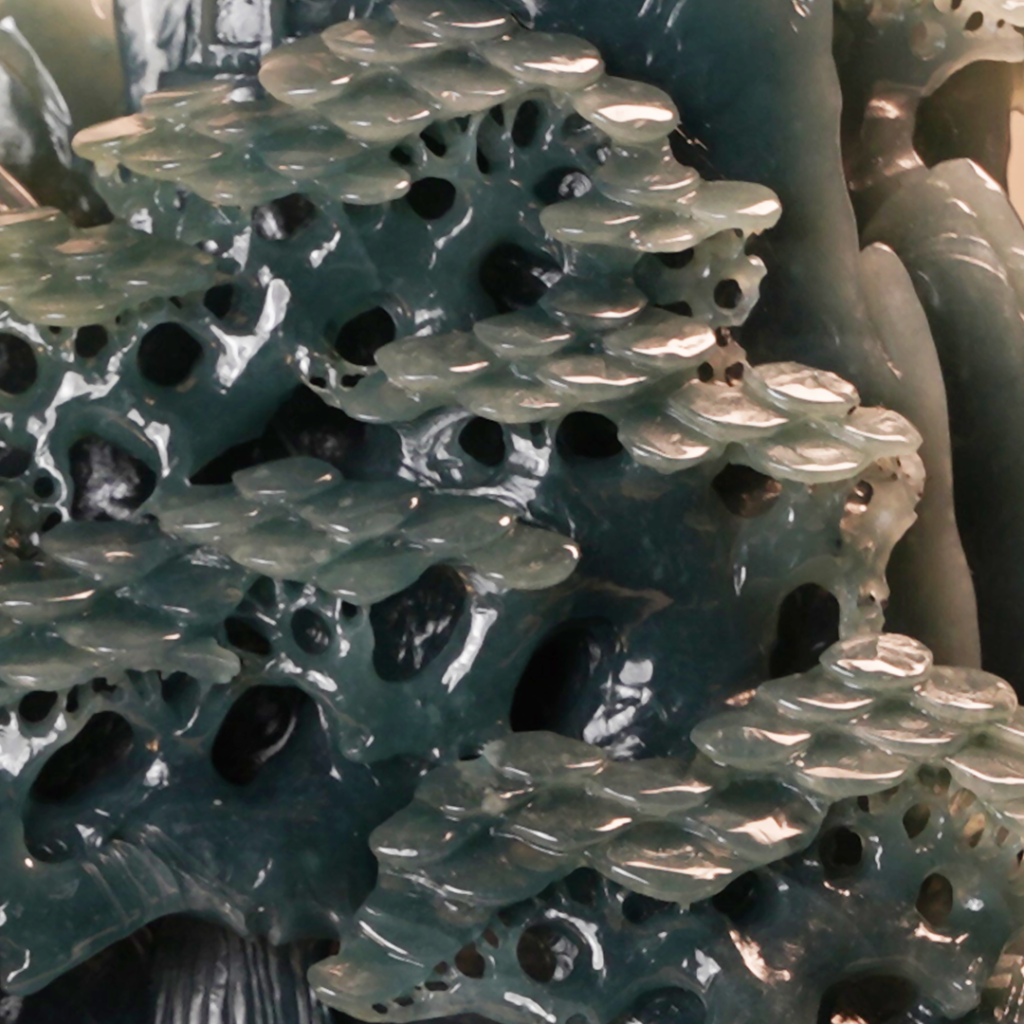 The collection features a bridge across the stream, which represents adaptability to challenges, and stands to empower its blessed owner to prevail over life’s challenges. Lastly, the house depicted is nestled among the low-lying hills, occupying an auspicious location known as the Dragon Meridian Point. This point gathers auspicious energy, ushering achievements in wealth and prosperity.

Read more about the collection here

Imperial Harvest’s contemporary interpretation of Agarwood beads and Qian Long Jadeite Mountains adorn the homes and offices of numerous clients, seamlessly blending into the design of the home, ushering in prosperity and expressing the goals and aspirations of the blessed owner.