The principles of Imperial Feng Shui bear close links to many aspects of the natural world, such as seasonal changes and other weather phenomena. The swift passing of the first quarter of the year brings about a change of seasons, as spring comes to an end and summer is poised to begin in the traditional Chinese lunar calendar. Each solar term in the lunisolar calendar lasts approximately 15 days and dictates discernable weather patterns, or the movements of celestial objects in the universe. 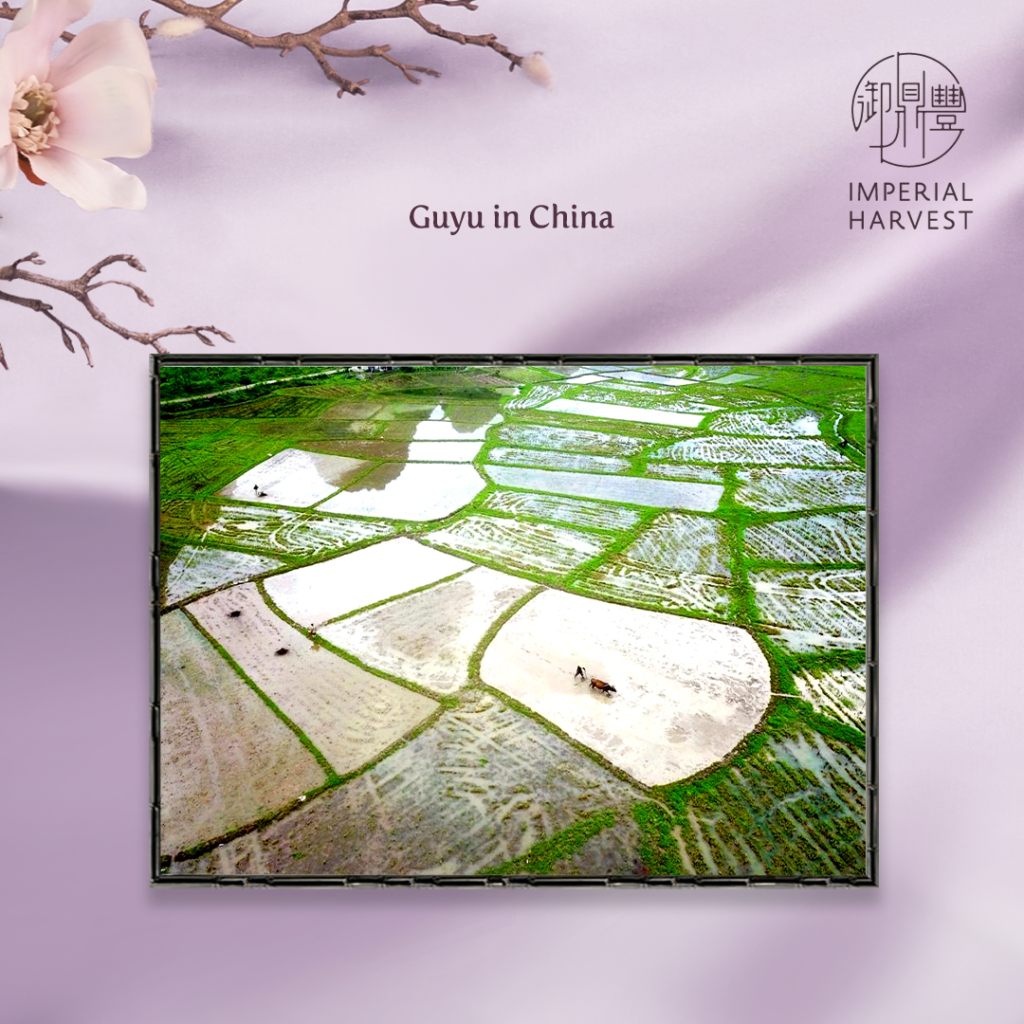 Closing off the spring season is Guyu (谷雨), a solar term that marks the transition from spring to summer. Guyu is characterised by the torrential downpour that accompanies this solar term. In meteorological terms, the weakening of high-altitude westerly winds across East Asia causes the accumulation of warm and humid air. Melding with low weather pressure and an increase in cyclone activity, this solar term brings a distinct spell of the continuous downfall of rain.

As a primarily agrarian society, this timely rainfall was highly anticipated by ancient Chinese farmers due to its positive effects on their crops. The rainfall reinvigorates the ground after a long and harsh winter, making the soil amenable to a new planting season and helping them to produce a bountiful yield. The value ascribed to Guyu has led to the adage that “spring rain is valuable as oil” (春雨贵如油).

The close relationship between Guyu’s cherished rainfall and farmers’ fortunes underscores the importance of water in achieving success. Turning to Imperial Feng Shui principles, the statement “Mountains govern benefactors, authority and harmony, while water governs wealth, opportunities and intuition.” (山管人丁，水管财) declares that water is crucial in the pursuit of abundance and prosperity.

Contrary to the guidance peddled by Classical Feng Shui masters, activating the wealth sector of your properties does not necessitate the inclusion of water features such as elaborate fountains or pools. Such guidance proves to be a simplistic insight into Feng Shui traditions, as further inspection into Chinese dynastic history reveals that such features were absent within the bounds of the Forbidden Palace. Instead, crystals of impeccable quality were deployed in the activation of the water star — a quality strongly advocated by Emperor Qian Long during the Qing Dynasty. The installation of Imperial Harvest-grade crystals within the Qing imperial court catalysed the empire’s prosperity, bringing about a golden age of economic and social development, peace and stability.

As Guyu brings an end to spring, it paves the way for a warm and inviting summer. Reflective of Guyu’s significance in China’s agricultural landscape, Imperial Harvest’s Signature Collection is a welcome dose of Imperial Feng Shui prowess — helping our blessed clients on their way to producing bountiful yields, encountering opportunities and breakthroughs in their pursuits this year. 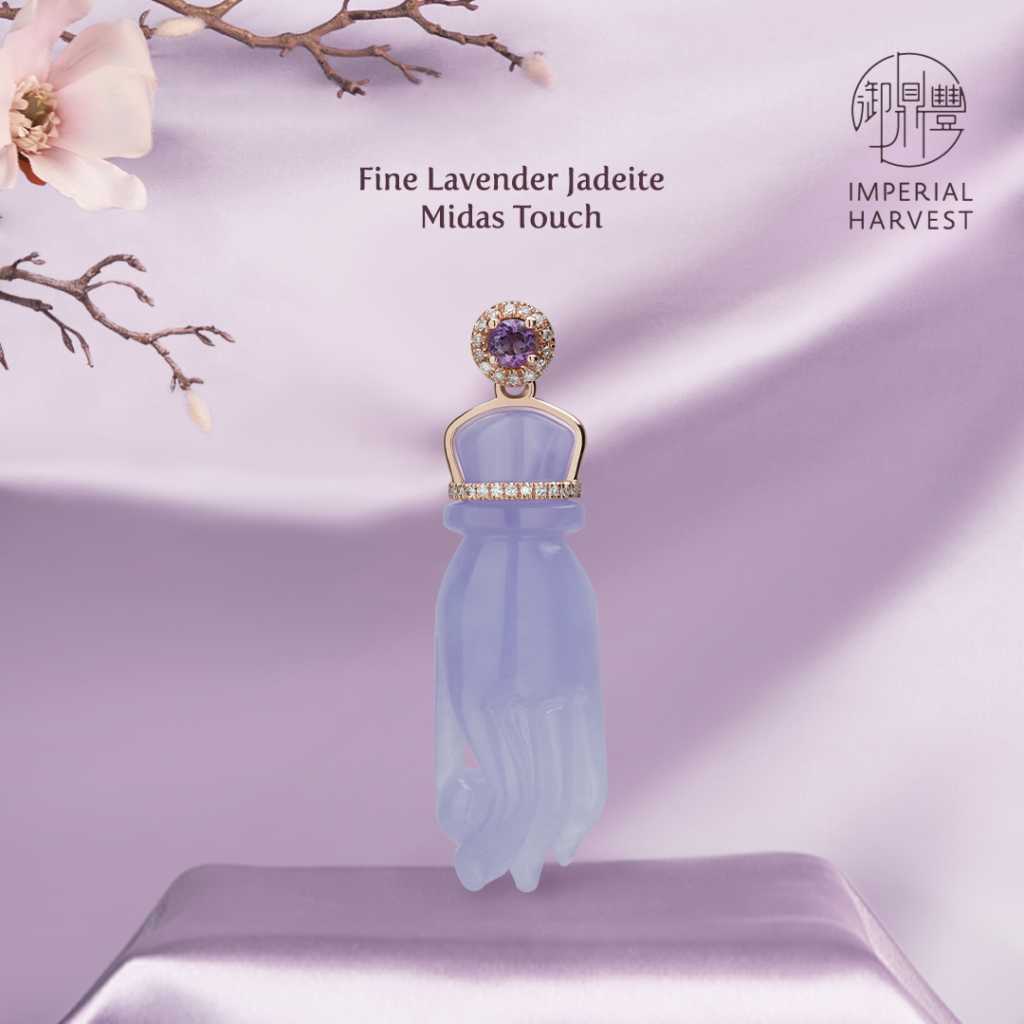 A firm favourite of Imperial Harvest clients for its elegant design, the Fine Jadeite Midas Touch embodies the immense blessings of the Goddess of Mercy’s most formidable representations, inspiring many to rise to the top echelons of their respective industries. 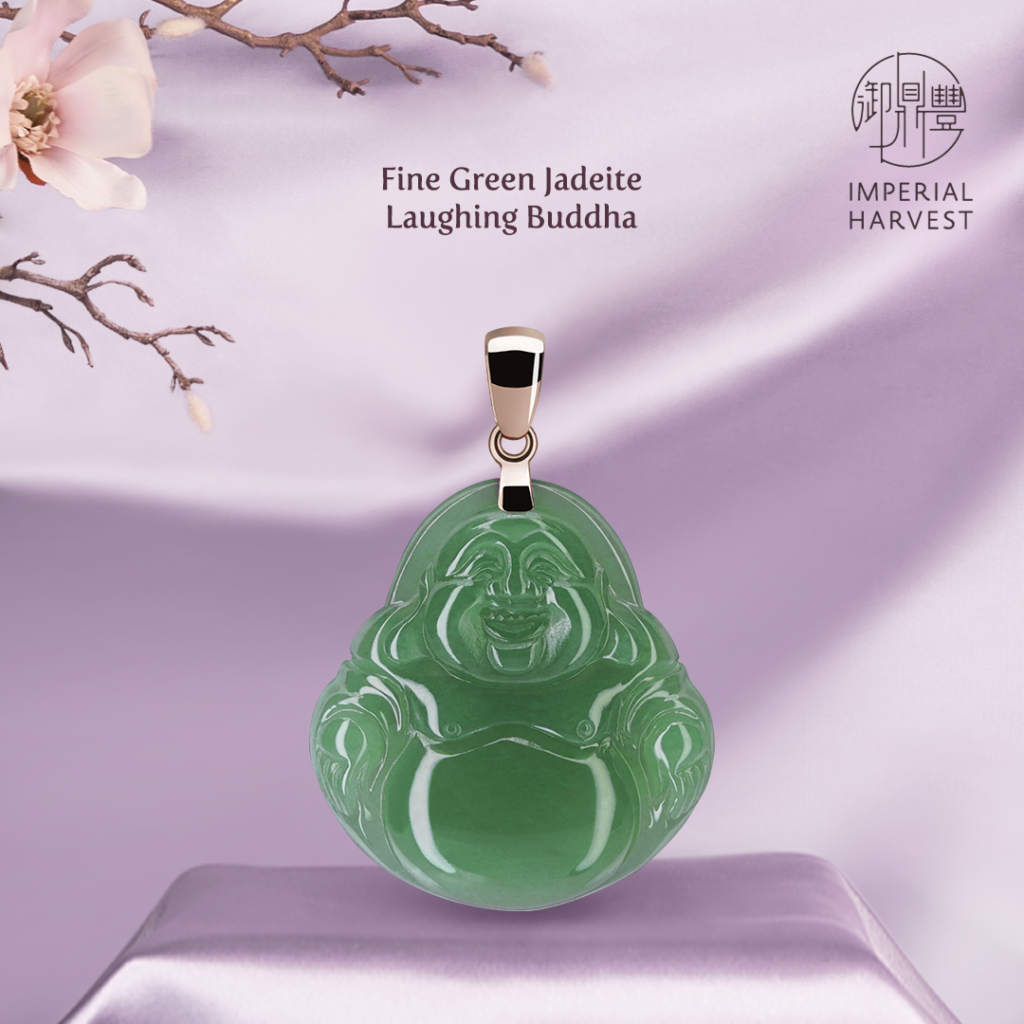 Regarded with great reverence in Chinese culture, the Laughing Buddha is a familiar figure of wealth, happiness and satisfaction — bringing good fortune, positivity and all-rounded success to its destined owner. 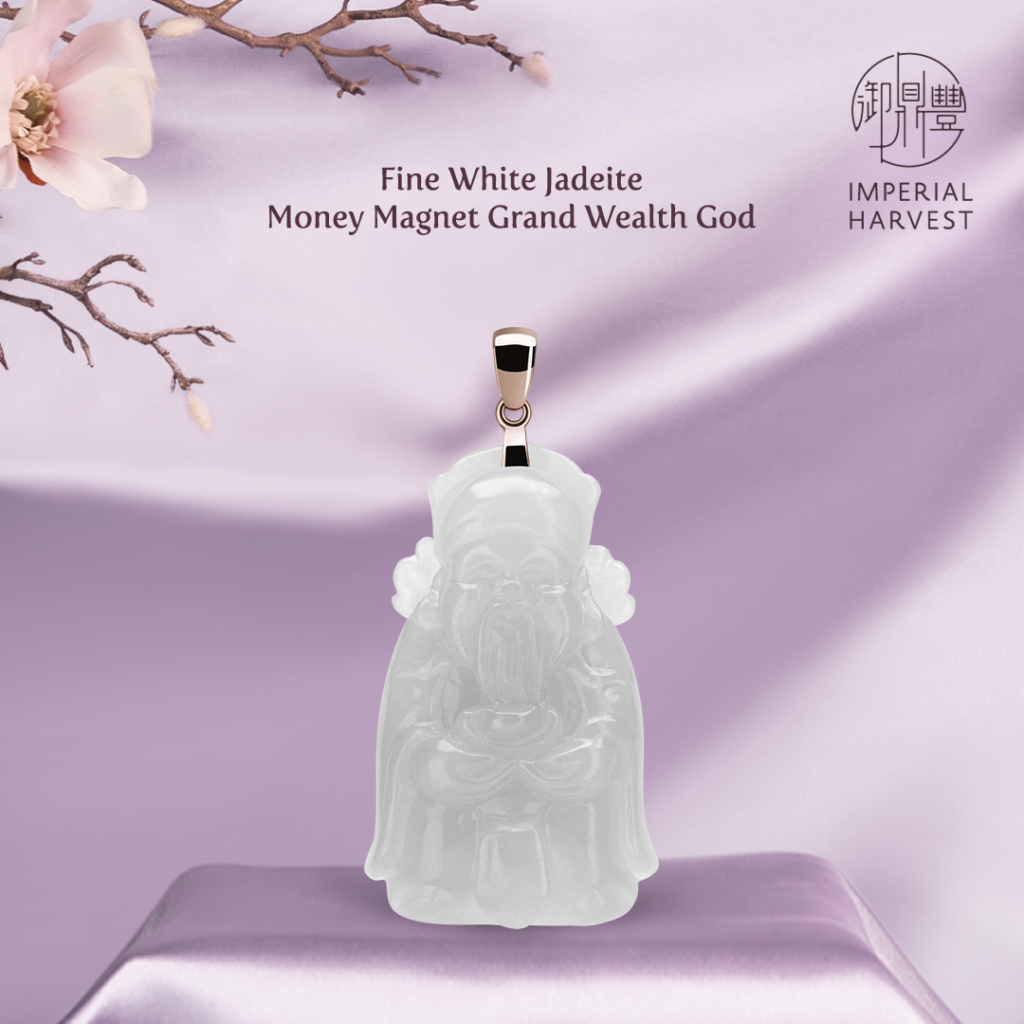 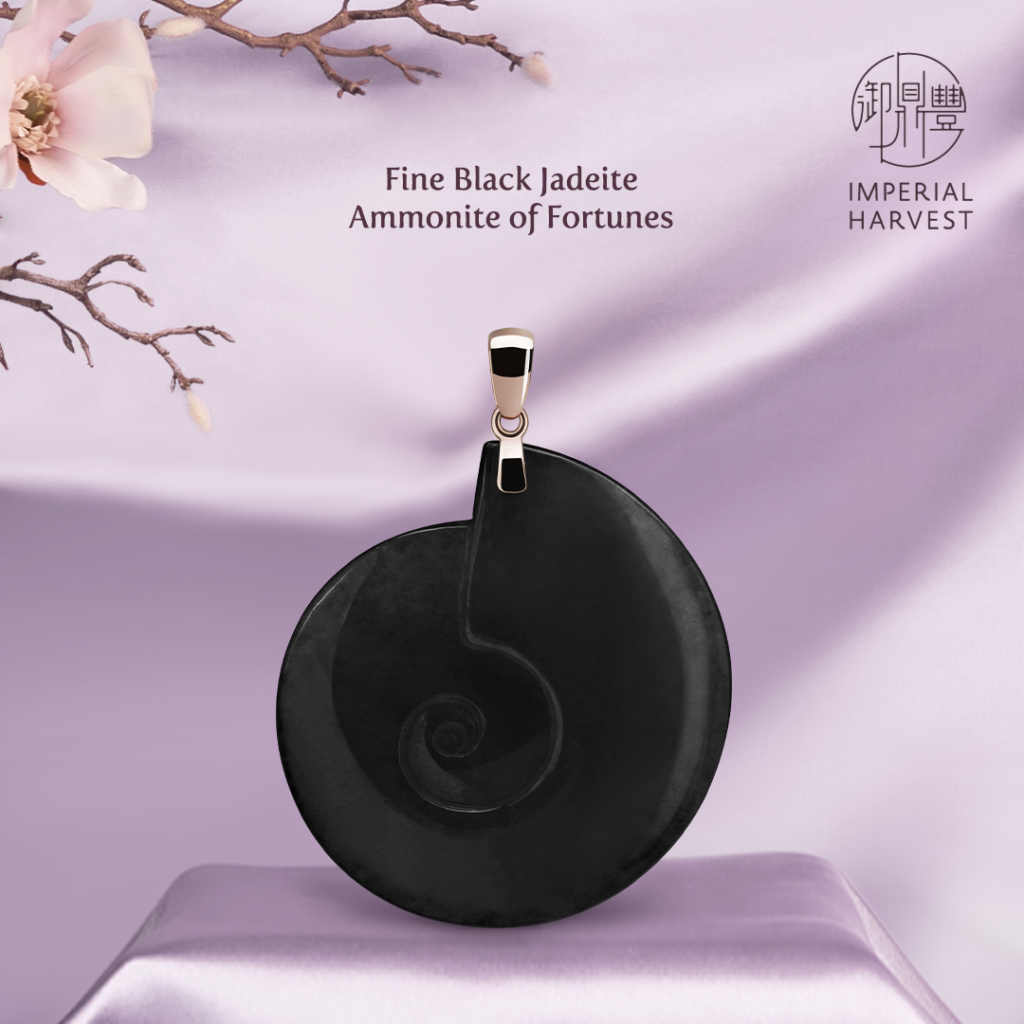 Converting obstacles into opportunities, the Fine Jadeite Ammonite of Fortunes is an excellent generator of good fortune, empowering its destined owner with an abundance of prosperity. 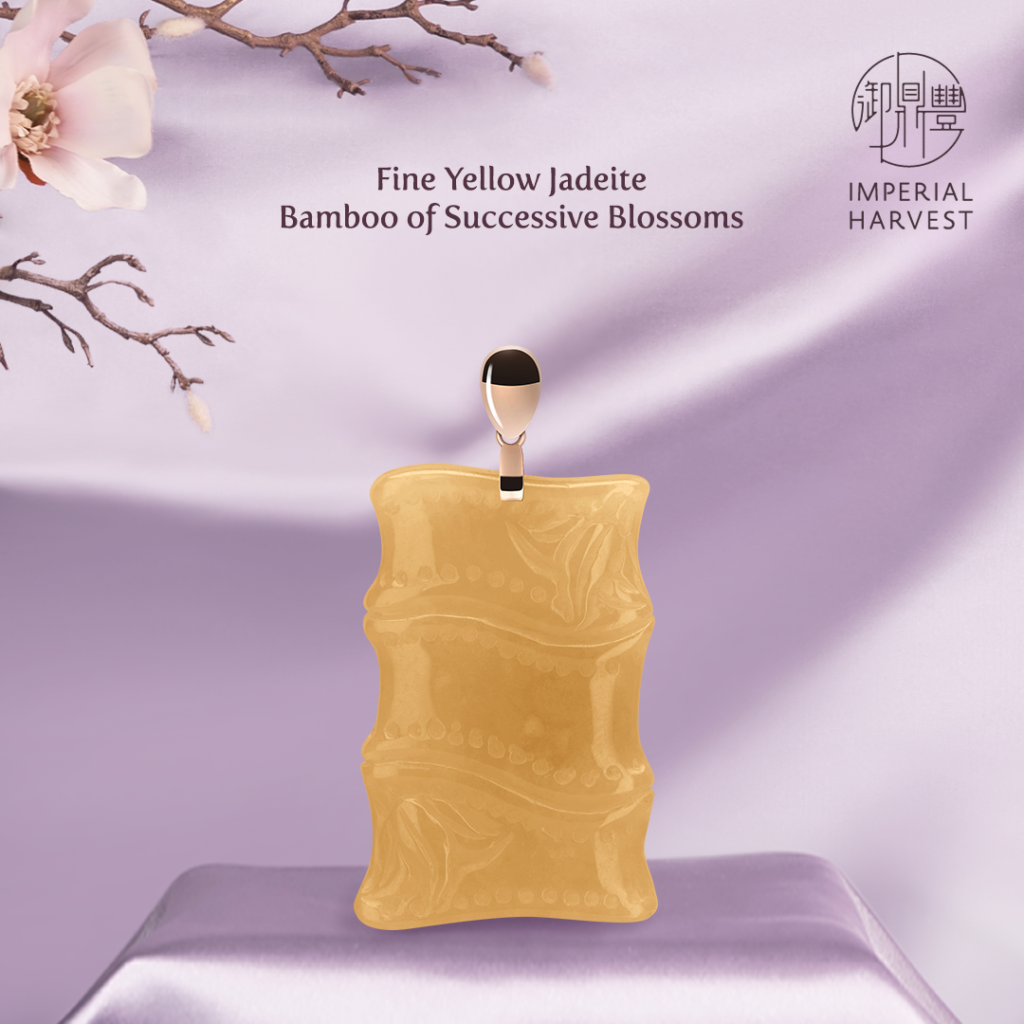 The Fine Jadeite Bamboo of Successive Blossoms draws on continuous growth and resilience, designed to assist its destined owner to achieve never-ending breakthroughs, and has since garnered rave reviews from Imperial Harvest’s clients.

The Imperial Harvest Crystal collection is a contemporary embodiment of the Imperial Feng Shui tradition that flourished under the eminent rule of Emperor Qian Long. Only the finest, naturally-coloured crystals are a mainstay of Imperial Harvest’s collections, yielding immense prosperity in the lives of our blessed clients.

Today, Imperial Harvest adheres to the principles of Imperial Feng Shui, employing the same techniques and treasures once used by Emperor Qian Long to usher unparalleled abundance and prosperity for our blessed clients. 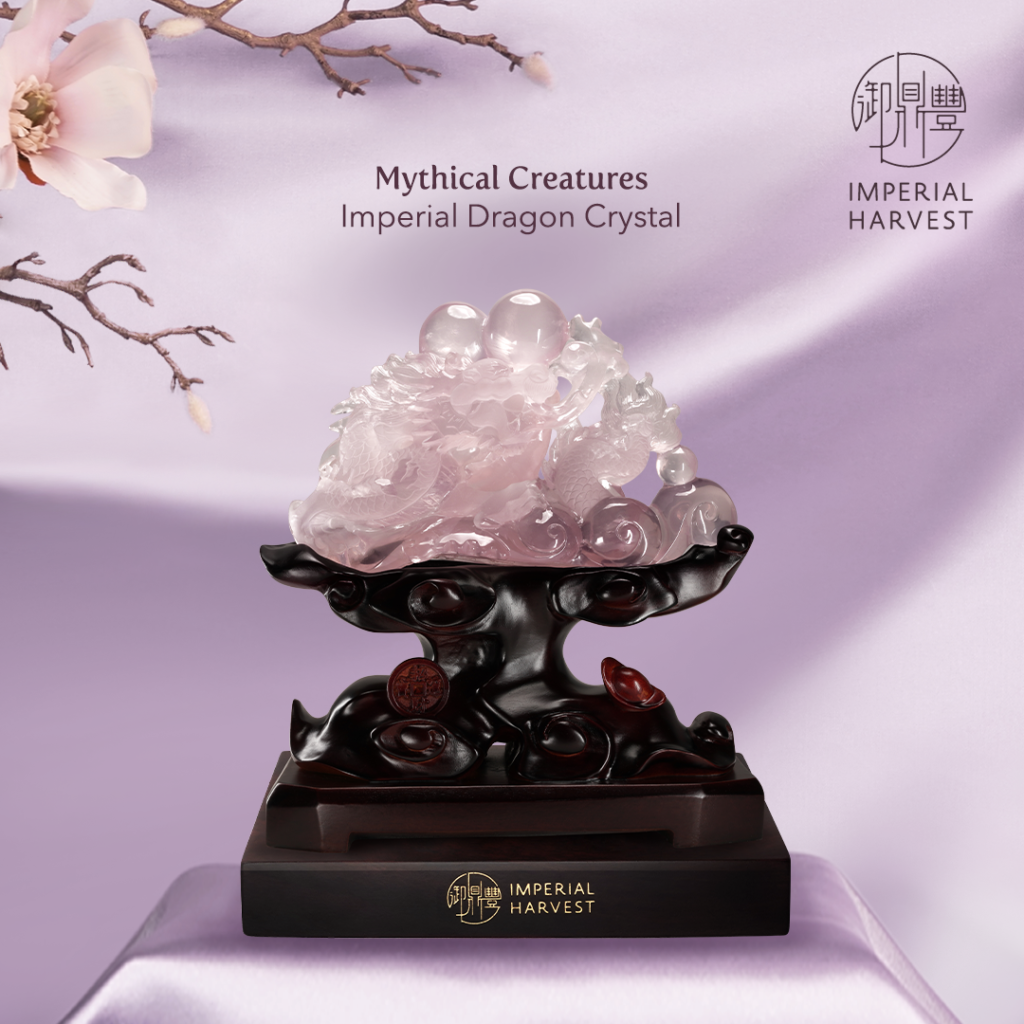 A testament to the time-honoured Imperial Feng Shui traditions at the heart of Imperial Harvest, the Imperial Dragon Crystal is a grand symbol of imperial majesty. The imposing dragon is one of the most powerful and divine creatures found throughout Chinese mythology — a most auspicious emblem of wealth and authority.

Long regarded in Chinese culture as belonging to the highest order of dragons, the Imperial Dragon has been synonymous with Chinese emperors. As imperial symbols of power, motifs of this heavenly creature have adorned the halls and architecture of the imperial palace. It was also prominently embroidered on the robes of the Chinese emperors, thereby emphasising their status as the Son of Heaven. 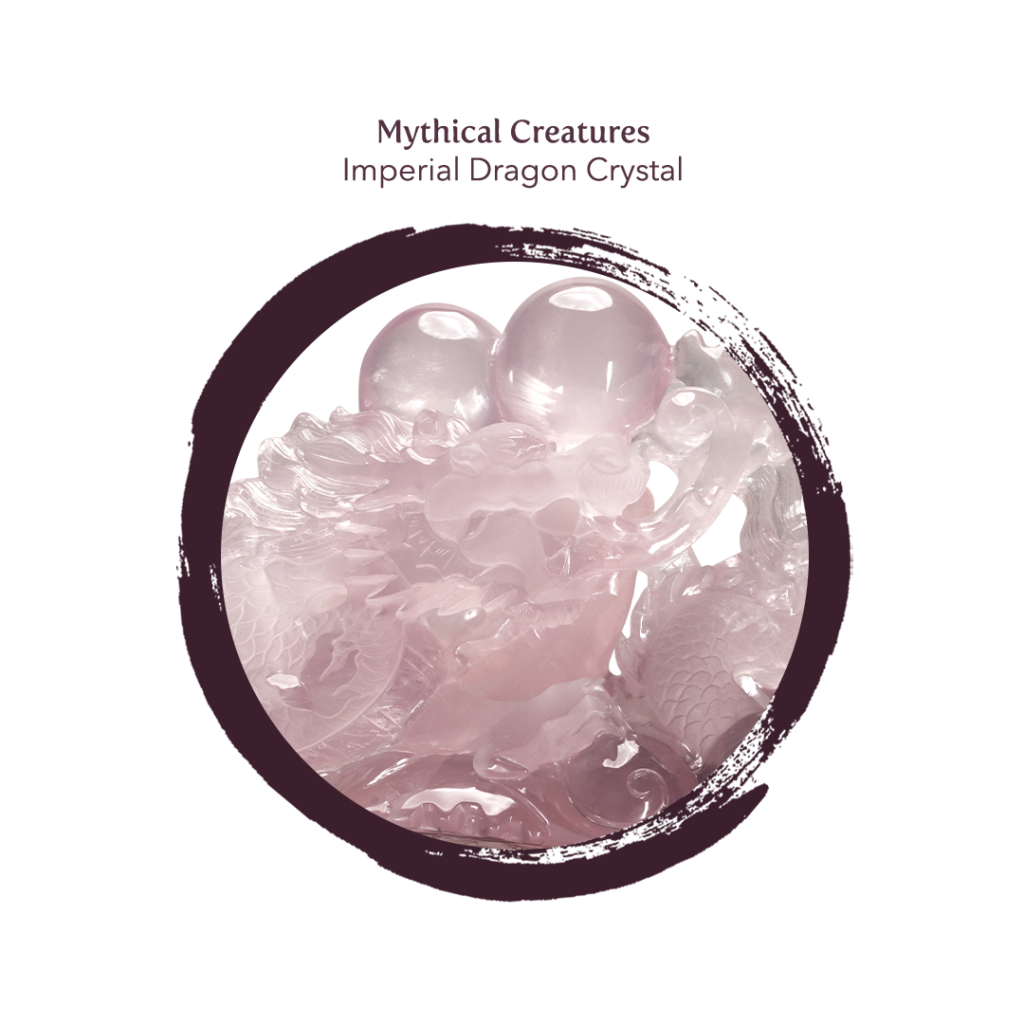 The Imperial Dragon emits auspicious energies, ascribed to its hallowed symbols of power and abundance. It is commonly invoked to bestow a spirit of personal development, good fortune, wisdom and foresight in individuals, empowering them to overcome their adversities and soar to greater heights.

Fashioned in the image of the Laughing Buddha (笑佛), this Imperial Harvest crystal enhances positive aspirations such as wealth, health and good fortune. A cultural symbol of happiness, contentment and abundance, the Laughing Buddha is accompanied by various symbols of prosperity — bestowing these blessings of abundance, happiness and satisfaction upon their destined owners. 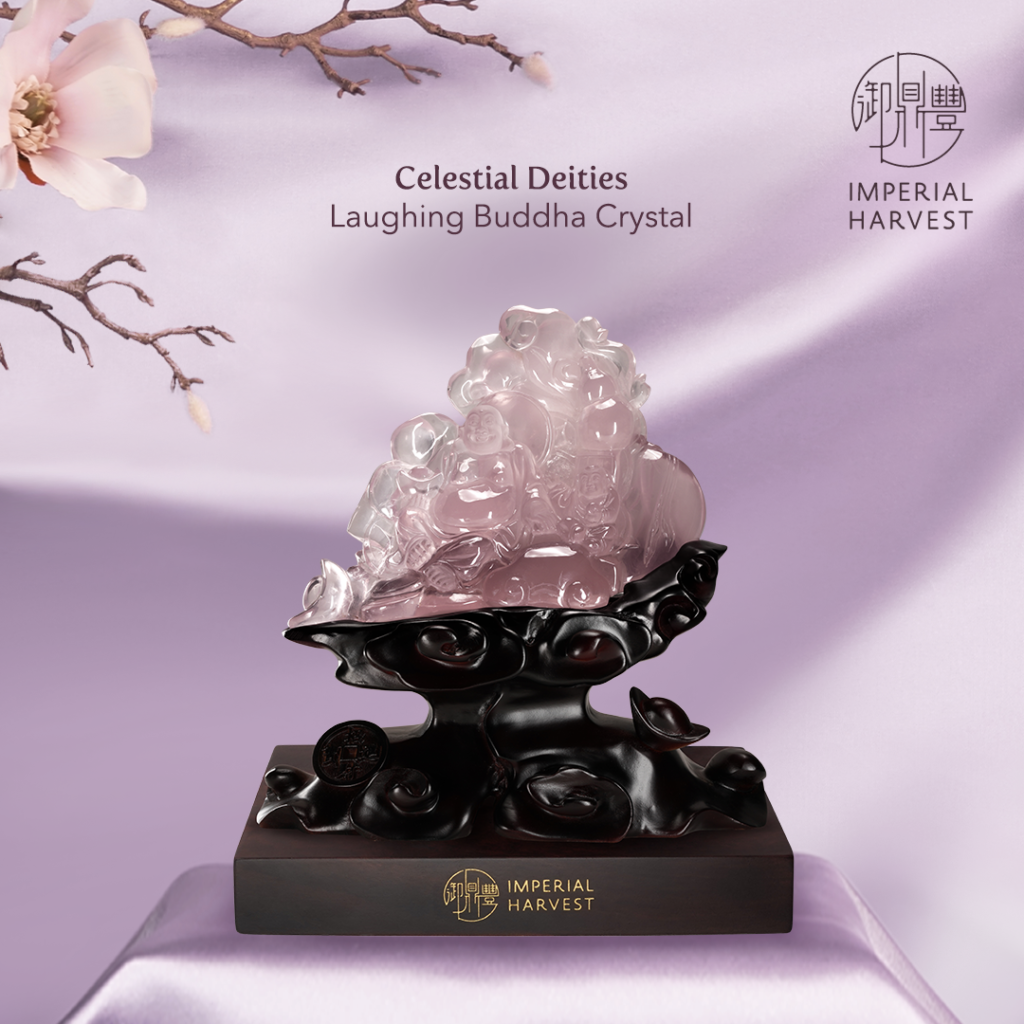 A prominent symbol of prosperity on the Imperial Harvest Laughing Buddha Crystal is the gold ingots situated alongside the deity. According to legend, the Laughing Buddha was often spotted with his signature treasure bag, filled to the brim with these gleaming gems. They signify ever-growing streams of wealth, helping to safeguard existing fortunes and exponentially multiply the revenue channels for its owners. 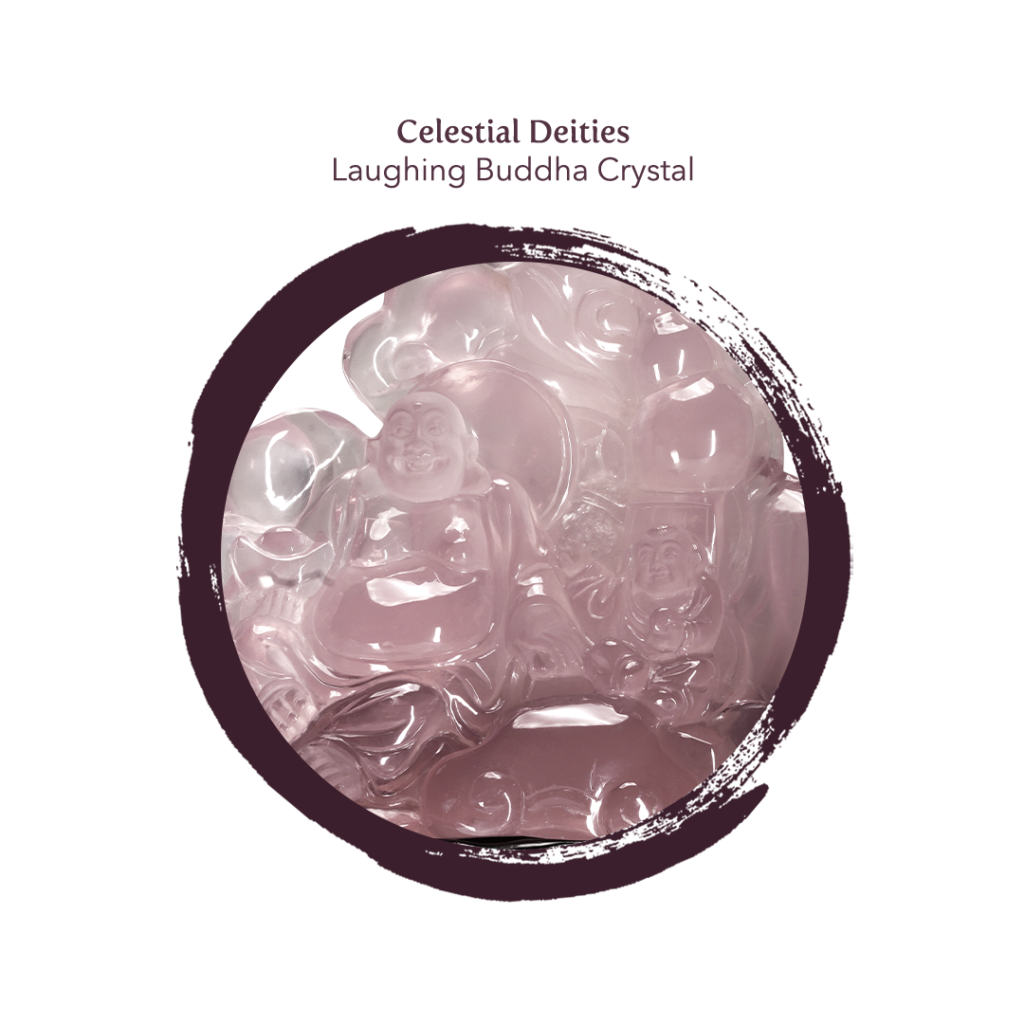 An ideal treasure for business owners and sales professionals, they are blessed with multiple strategic benefactors, aiding them to generate quality leads and lucrative opportunities. Smooth-sailing sales naturally ensue and translate to record-breaking sales figures.

The Golden Hall of Prosperity series is a collection of everyday objects and phenomena that are emblematic in Chinese culture, inspiring desirable qualities such as enduring success and prosperity. 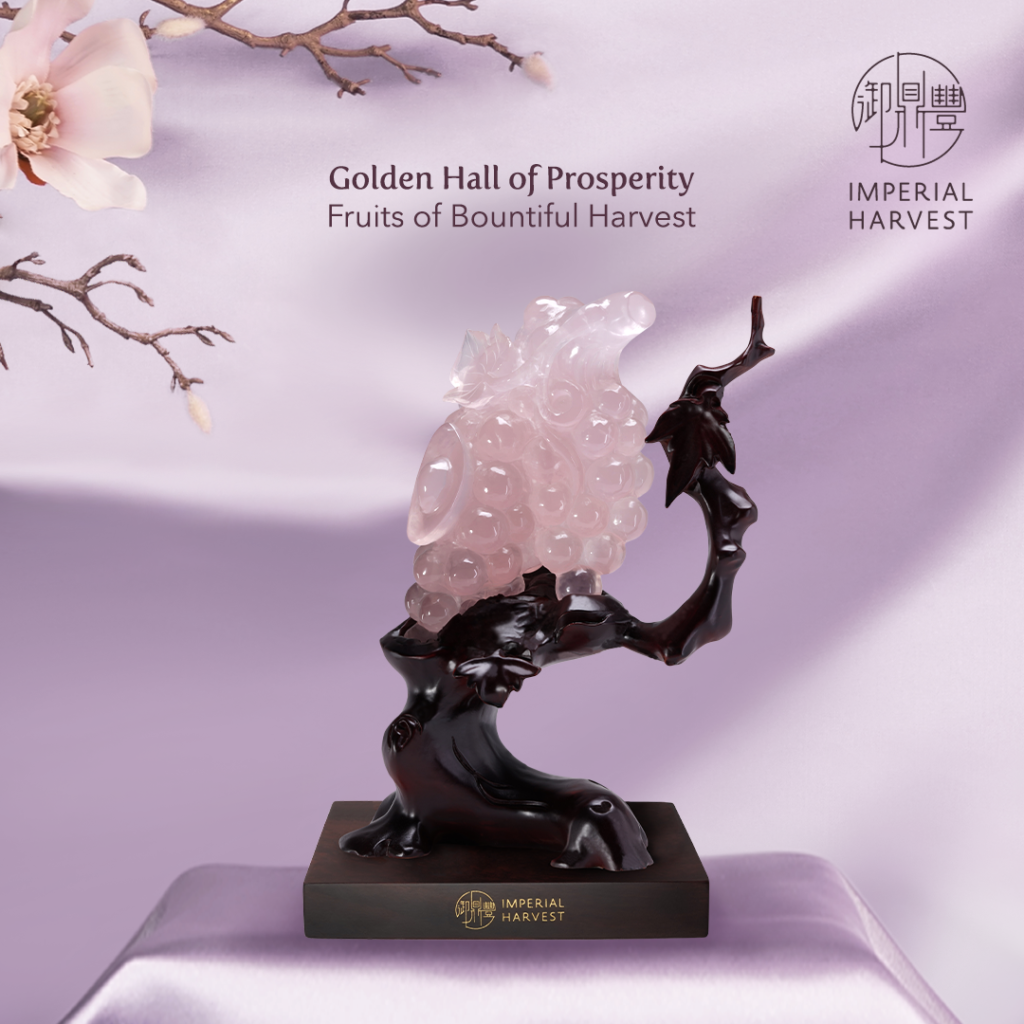 The Fruits of Bountiful Harvest Crystal is fashioned in the image of a tantalising bunch of grapes. Known to be avid climbers, grapes spread their vines across any trellises they come across, growing stronger in the process. This tenacious plant is quick to pounce at the opportunity to expand its influence, laying claim to an ever-increasing expanse of land. 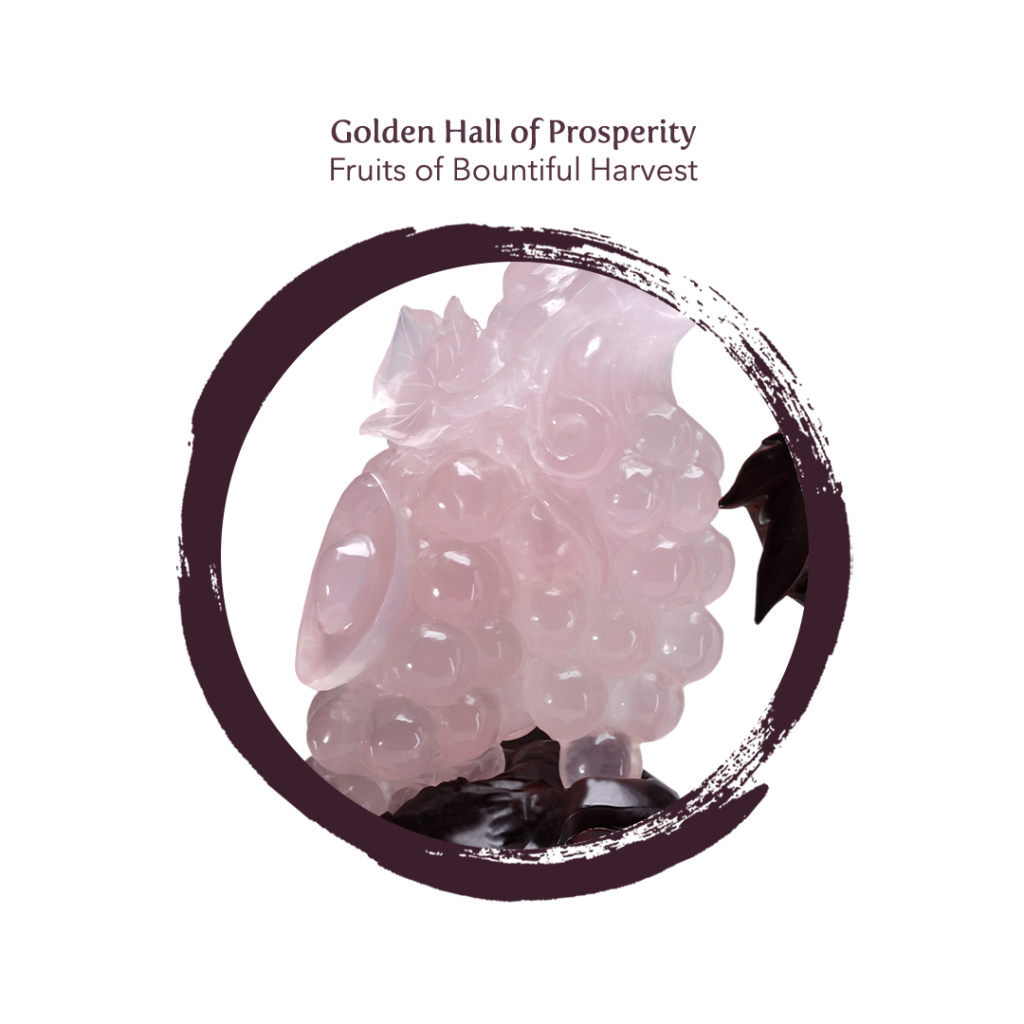 Reflecting the persevering nature of the grapevine, this exquisite rose quartz treasure empowers its destined owner to pursue and seize the windows of opportunity that arise on their roads toward success, turning every prospect into triumph. As the destined owners’ business, career or investment pursuits bear fruit, they find themselves blessed with increasing channels of achievement and abundance. Bringing unceasing success in the personal and professional pursuits of its destined owner, this superlative treasure allows for an accumulation of an abundance of prosperity for generations to come.